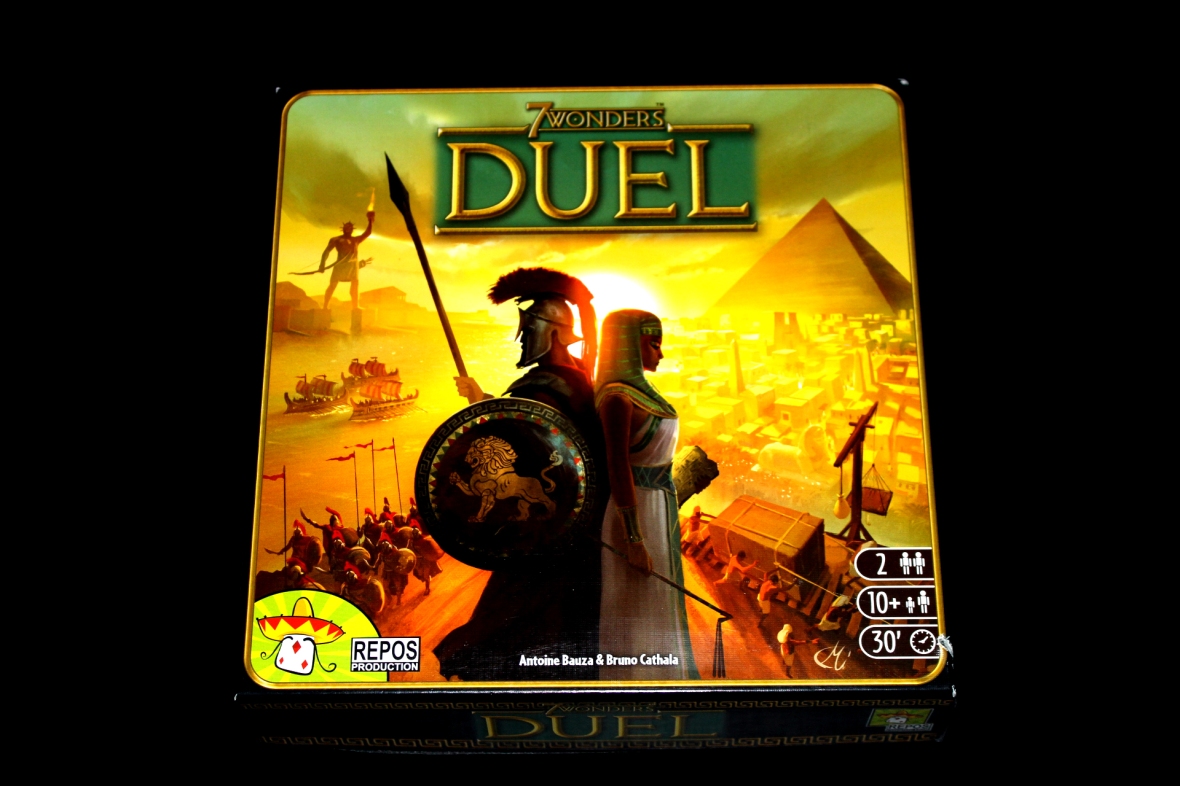 I’ve been meaning to get to this one for some time.

7 Wonders Duel is a two-player-only variant on the classic 7 Wonders, released in 2015. In it, as in 7 Wonders, you compete to build the greatest civilization of all time by collecting resources, researching scientific advancements, building both social and commercial structures, and, of course, crushing your opponents with the sheer might of your military. Unlike the original 7 Wonders, instead of just being a two-player variant, 7 Wonders Duel is a full-fledged game with different rules (and some different win conditions!). So will you be able to defeat your rival? Or will your civilization be remembered as promising, but ultimately brief? Read more and find out how to get started.

Surprising me somewhat based on my experience with 7 Wonders, this game isn’t all that tricky to set up. You’ll notice when you open the box and dig through it that you’ve got a board, some red tokens with a split coin on them, and a red swords / shield token (the Conflict Pawn). Set them up like this: 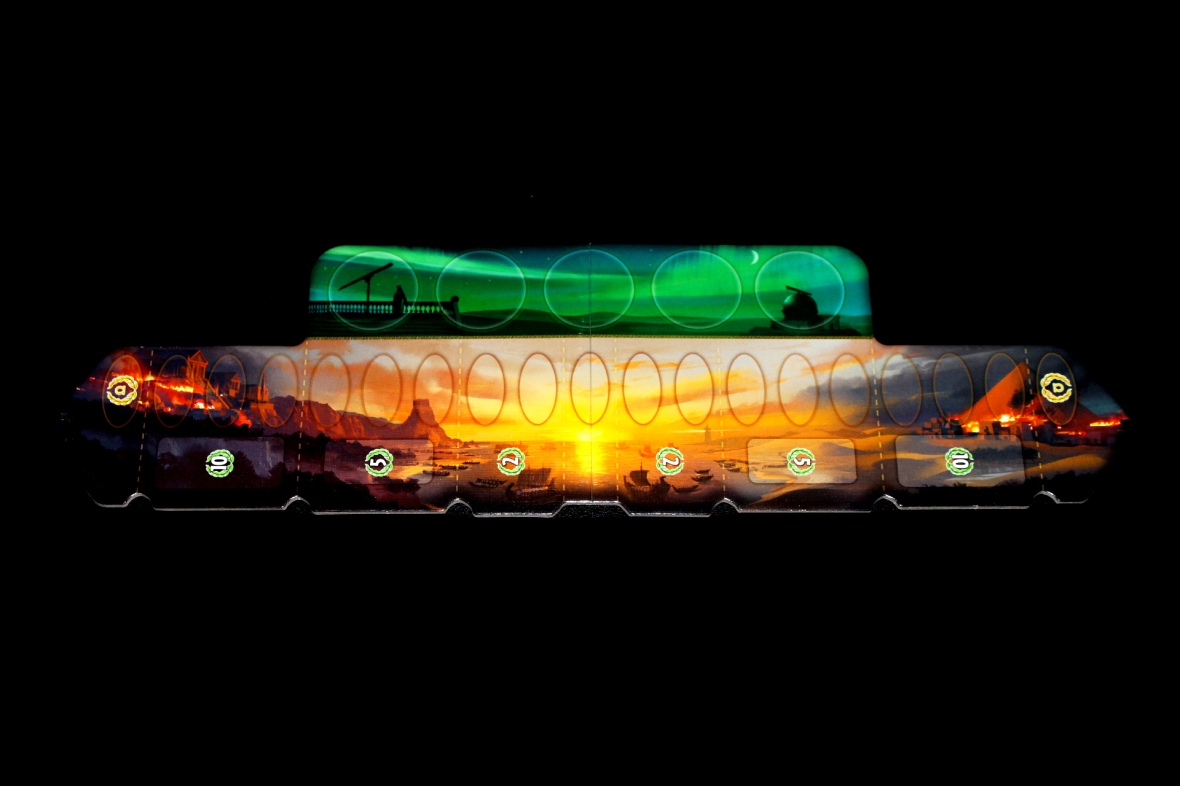 Next, you’ll notice you have some green circle tokens. Shuffle them (or swish them around, I don’t really know how you shuffle tiles) and then place five face-up on the game board, like so: 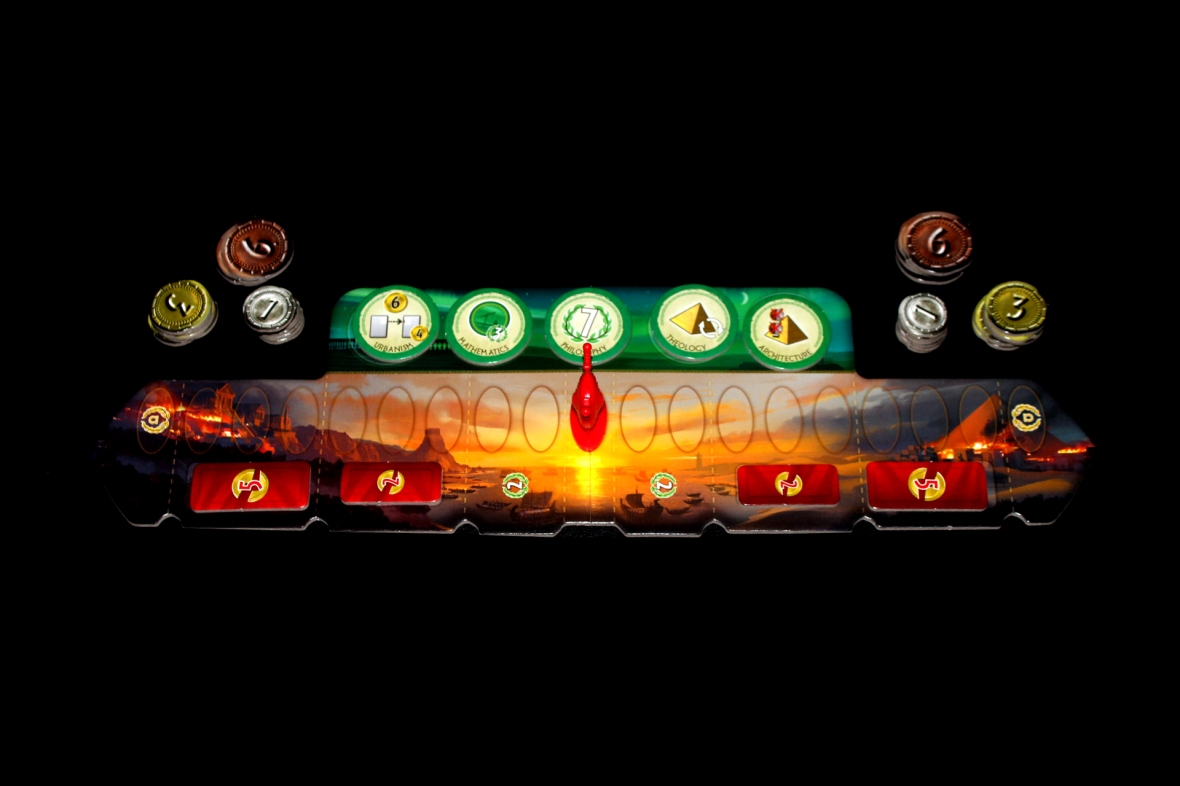 Now, you’ll notice you have five types of cards: 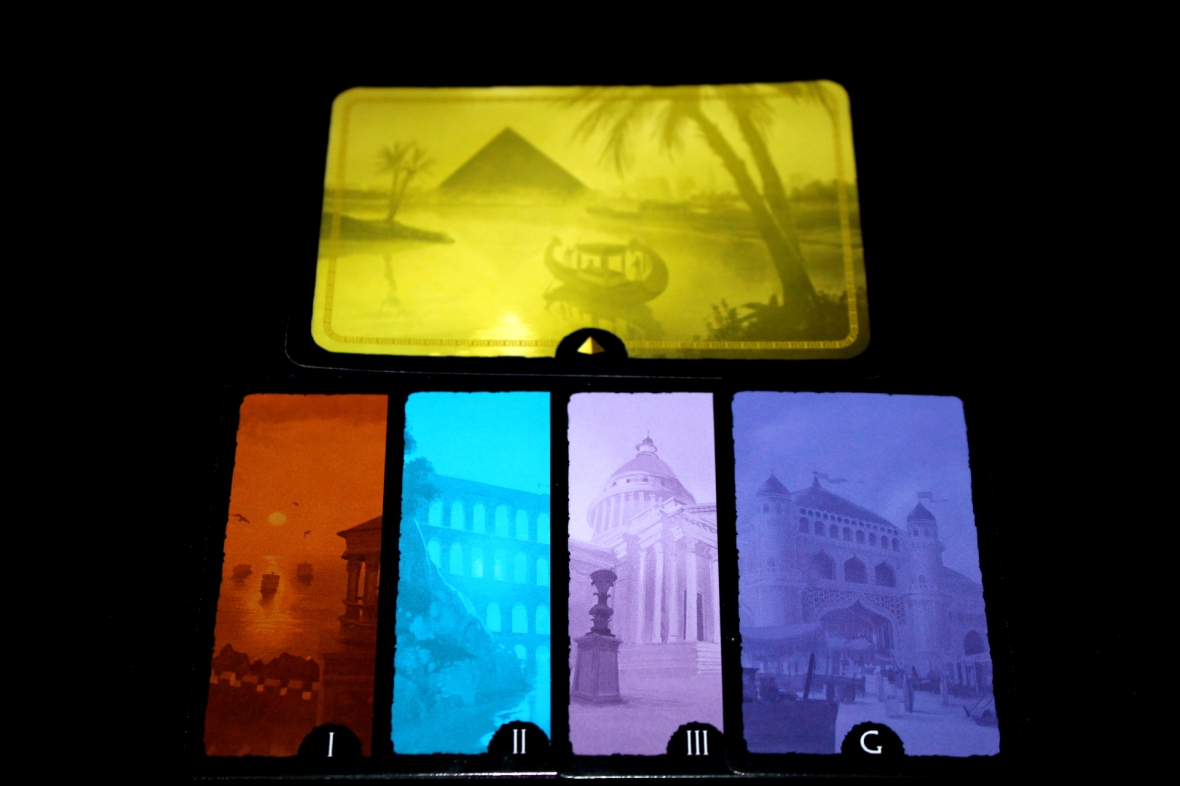 Shuffle all of these (separately; please don’t shuffle them together) and set the Wonder cards aside for now. Remove three cards from the Age I, II, and III cards (and four from the Guild cards) and set them aside, as they won’t be used in this game. Shuffle the Guilds into the Age III deck, and then you’re almost ready to get started. The last thing you need to do is distribute Wonders: 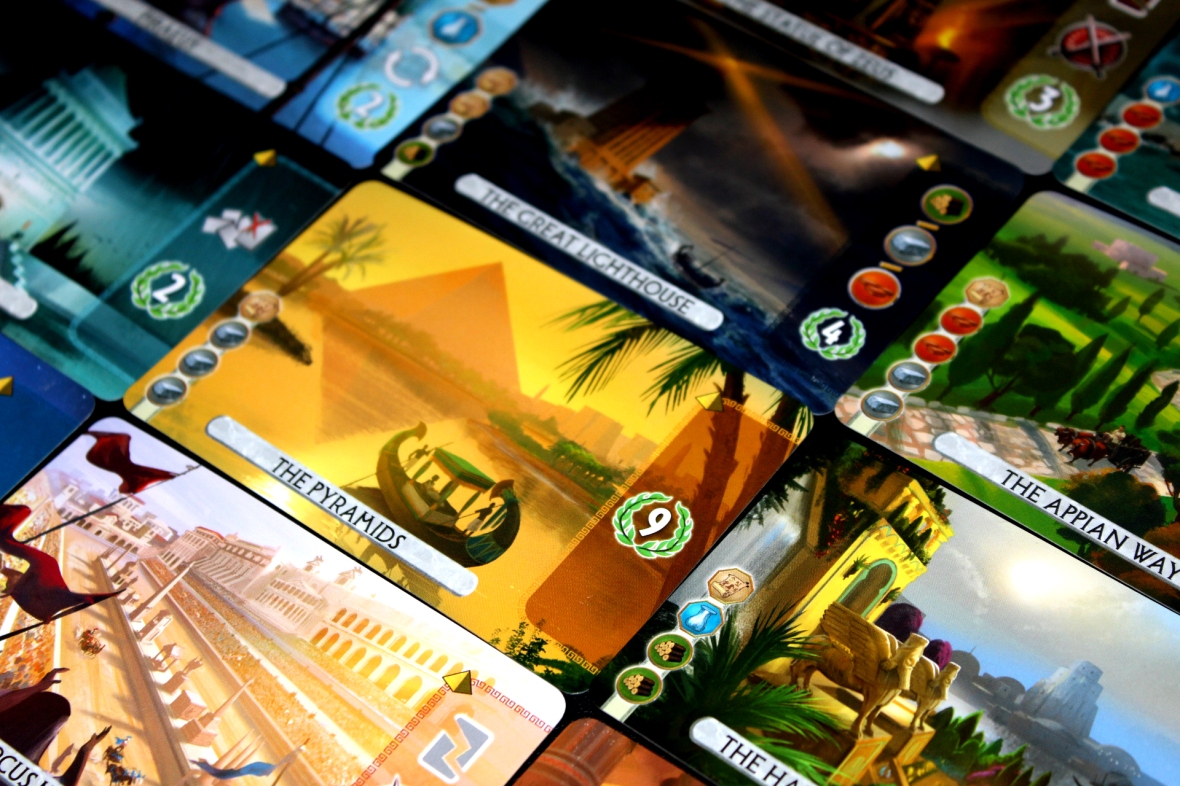 You could do this randomly (or there’s a suggested setup in the rules – Player 1 gets the Pyramids, the Great Lighthouse, the Temple of Artemis, and the Statue of Zeus; Player 2 gets Circus Maximus, Piraeus, the Appian Way, and the Colossus), or you could draft the wonders. Here’s how that works.

Once you’ve done all that, there’s one last bit of setup. See, 7 Wonders is a bit of a weird animal in that it requires a specific card layout per Age: 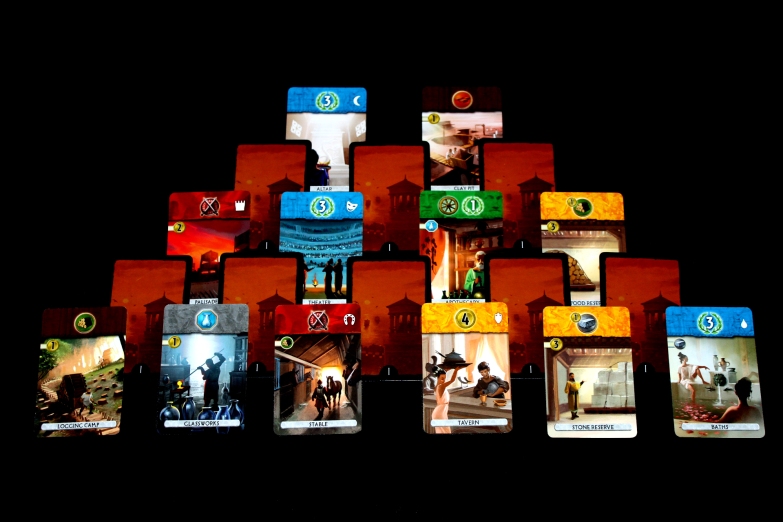 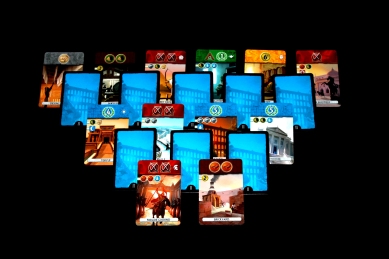 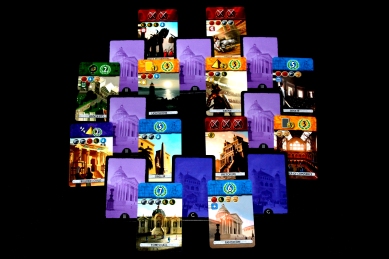 You can (and should!) refer to the rules for the layouts, but I’ll also show them here. For Age I: 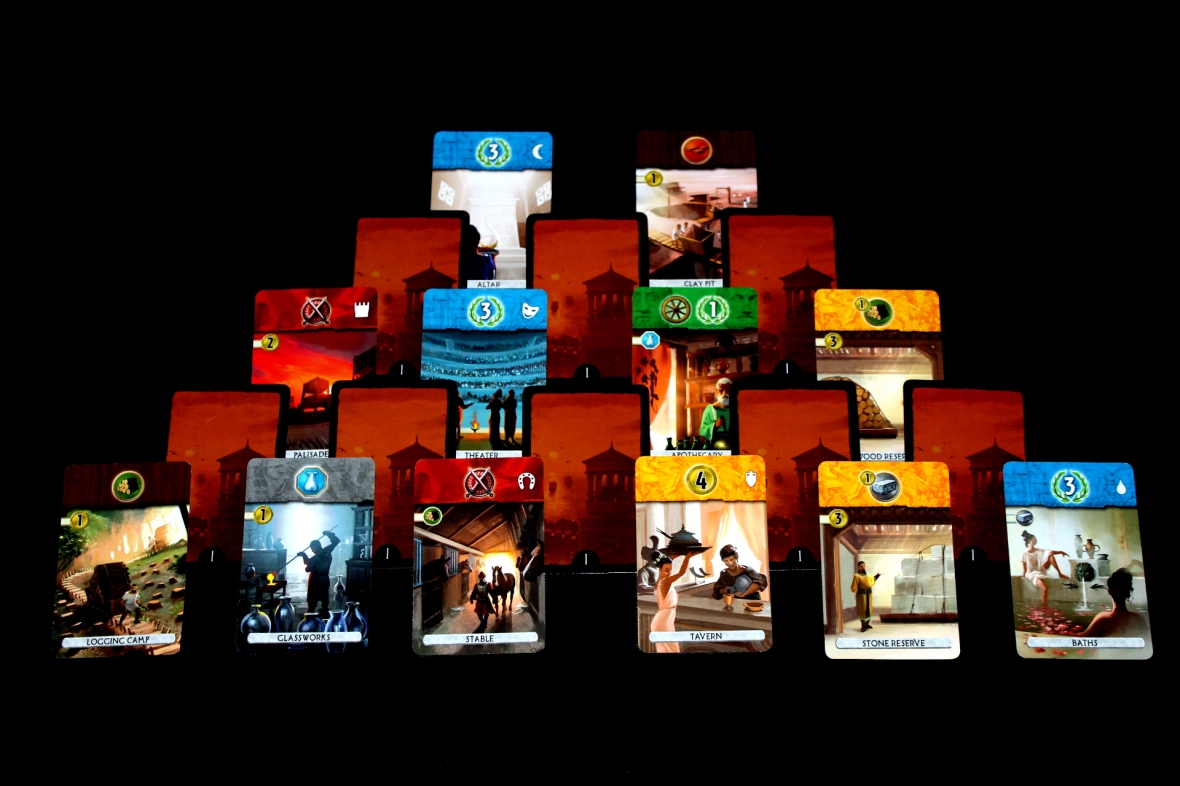 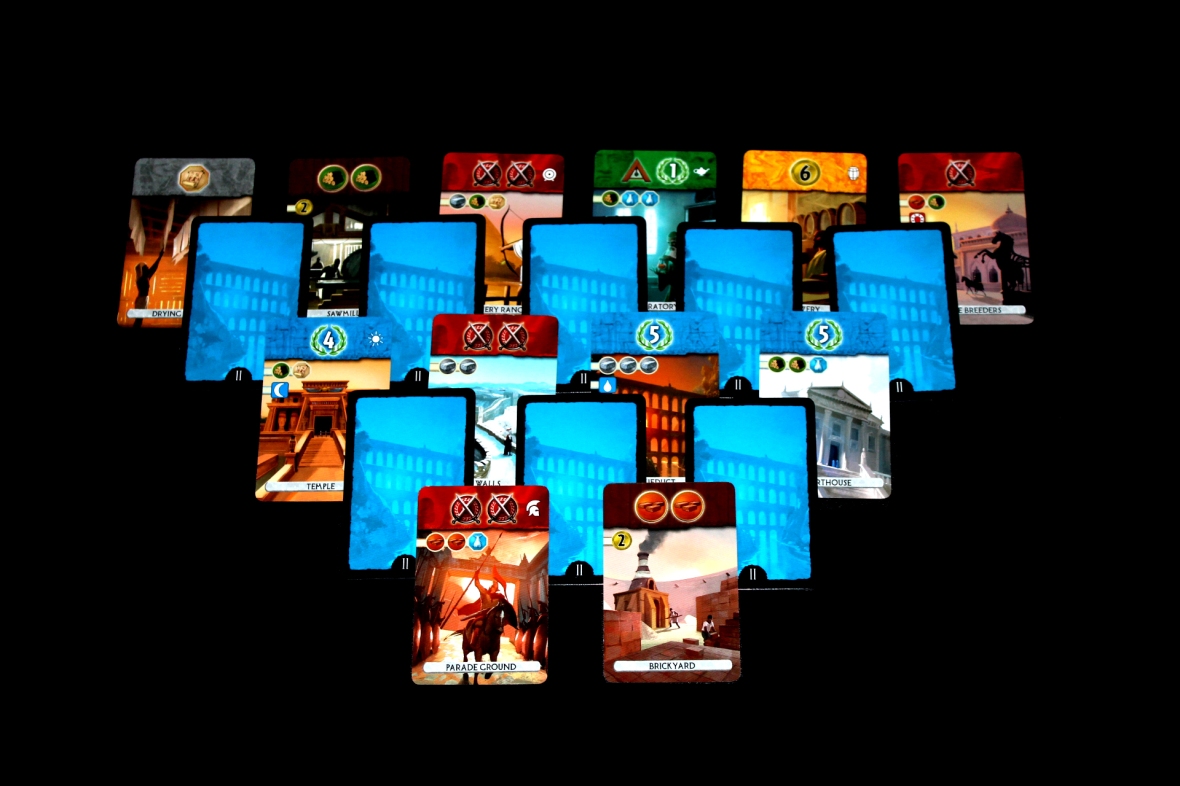 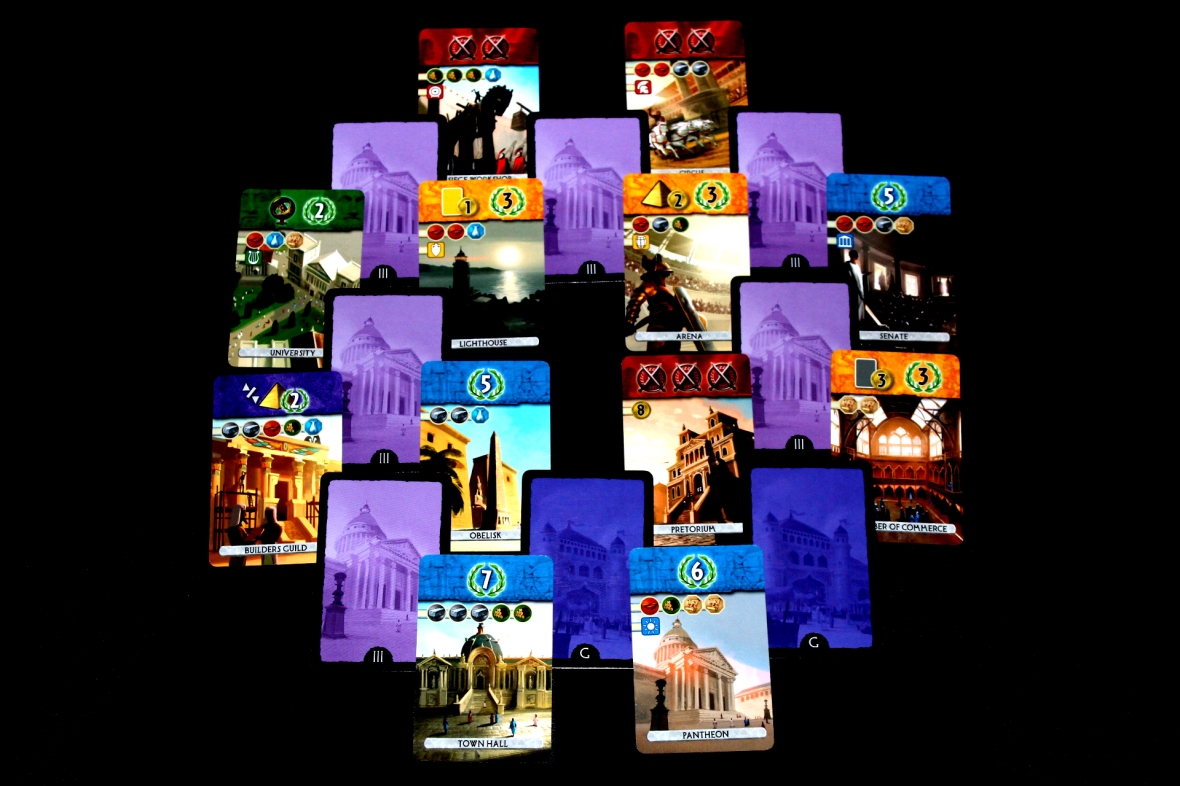 Once you’ve done that, give both player 7 coins. If your play area looks like this, you’re ready to begin: 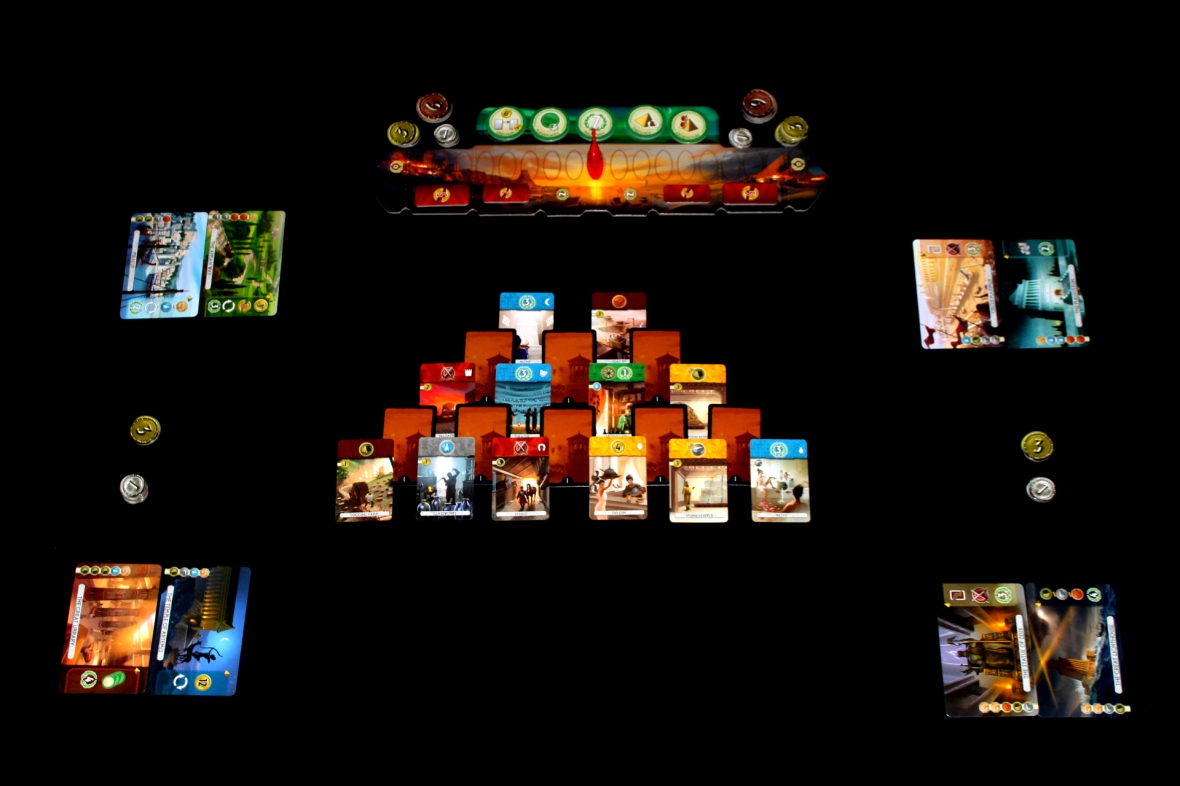 Gameplay is actually pretty neat, here. So in a lot of ways it retains a lot of similarities to 7 Wonders, in that you are discarding cards to gain money or playing cards by paying their costs or constructing wonders, but rather than having a hand of cards you can use on your turn you pull an uncovered card from the setup pile. This means that there are no other cards on top of it and it is face-up. If, in the process of taking and using a card, you uncover a face-down card, flip it face-up. It’s meant to add an air of mystery and force players to think a bit more on the fly. So let’s talk about cards: 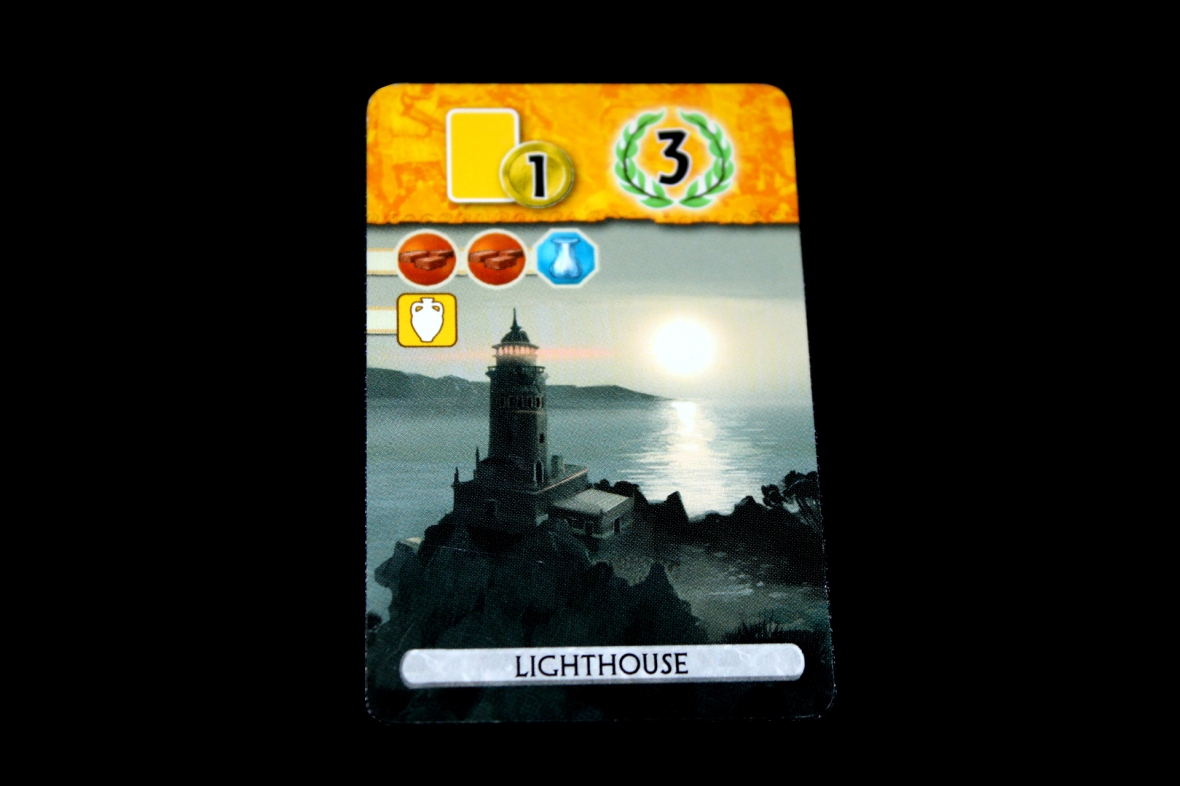 You can see that the card has a color, some sort of symbol or action (the top), a cost and potentially a condition (top left of the card’s picture) and a name (the bottom). The name’s not super relevant to like, gameplay, but it’s there, so … now you know. Let’s talk about the other stuff. 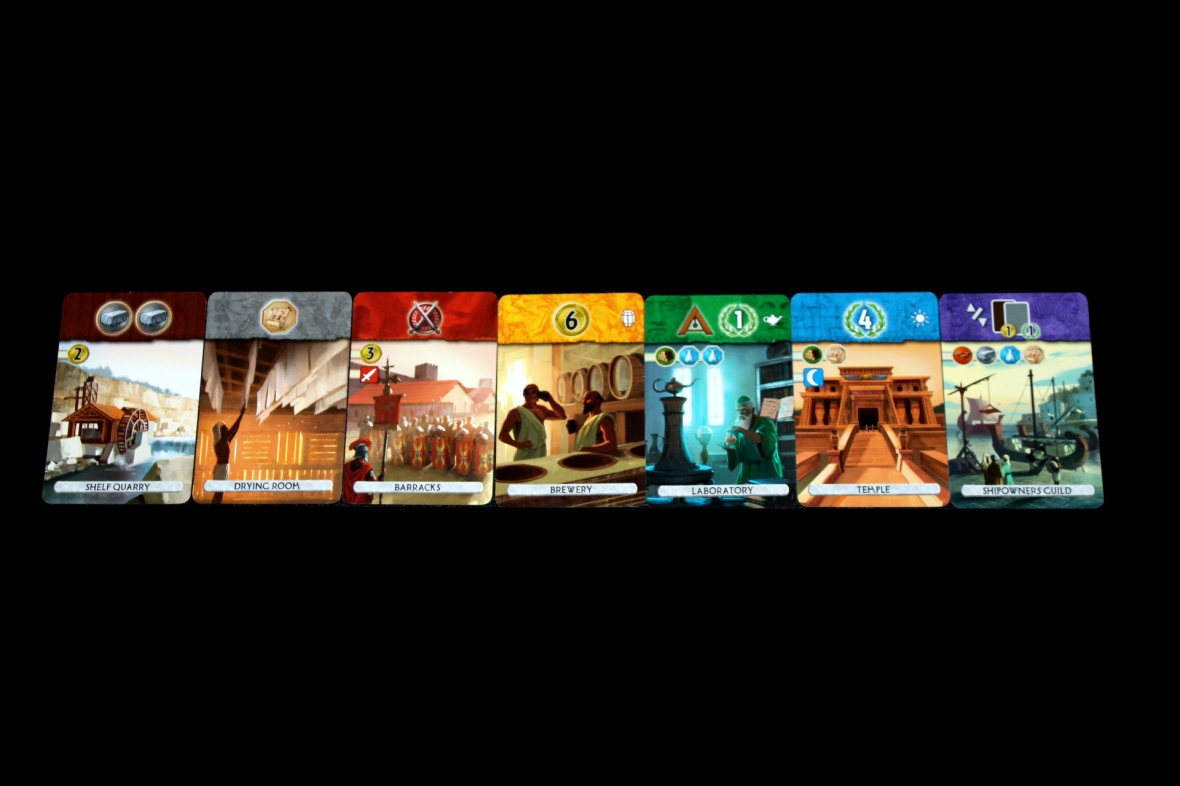 There are 7 different colors of cards in the game, and they each represent a different type of building that you can construct in your civilization. They are as follows:

As I mentioned earlier, on your turn you can “buy” a card by checking to make sure that you produce all of the necessary resources to buy it. If you do, you gain that card (if there’s a coin cost, you must pay those coins to the bank as well). If you do not, you can trade for those resources by paying the bank 2 + X money for each resource you’re missing, where X is the number of that resource your opponent produces. Yes, that means if your opponent produces three clay and you want to buy three, it will cost you 15 money, which is a lot. Thankfully, some cards can reduce the cost you have to pay per resource to 1, but you might still be wanting for cash if you’re trading a lot.

There are also cards that have a symbol in the top and cards with a matching symbol in the top-left near that cost. Those are effectively “if you have a card with this symbol (like a sun, for instance), you can build this for free”. We refer to that as chain-building, and it’s pretty awesome. You should try to do that, if you can, because free buildings are pretty sweet.

Other Uses for Cards

If you can’t afford (or don’t want to buy / want to prevent your opponent from buying) a card, you can also elect to discard it from the game and take 2 coins. You also get an additional coin for every yellow building card you have in your play area, which can be really helpful when you’re trying to buy more resources.

You can also build one of your Wonders by paying the Wonder’s cost and taking a playable card and placing it under your Wonder, face-down. You then activate the Wonder, which might give you extra military shields (moving the Conflict Pawn), money, or victory points, or give you a variety of effects, such as forcing your opponent to discard a brown or gray card of your choice, getting to pick a card from the discarded cards and play it for free, or even generating any one resource (of either clay/stone/wood or glass/papyrus) that you want! Generally they’re pretty good. Some even let you take another turn immediately, making them even more useful.

Note that, as the name suggests, there can only be seven Wonders, so if your opponent has already built four of theirs, you can only build three of yours. Turn the fourth one face-down to alleviate confusion, once your third one is built. Or put it back in the box, but I prefer the face-down method.

As mentioned earlier, if a player either pushes the Conflict Pawn into the other player’s capital (Military Supremacy) or successfully gains six difference science tokens (Scientific Supremacy), they instantly win and the game is over, no matter when it happens. If they do not, tally the points you get from all your buildings, your Wonders, your Progress Tokens, and your military progress (the location of the Conflict Pawn). Add in 1 point for every 3 coins that you have. The player with the most points wins! 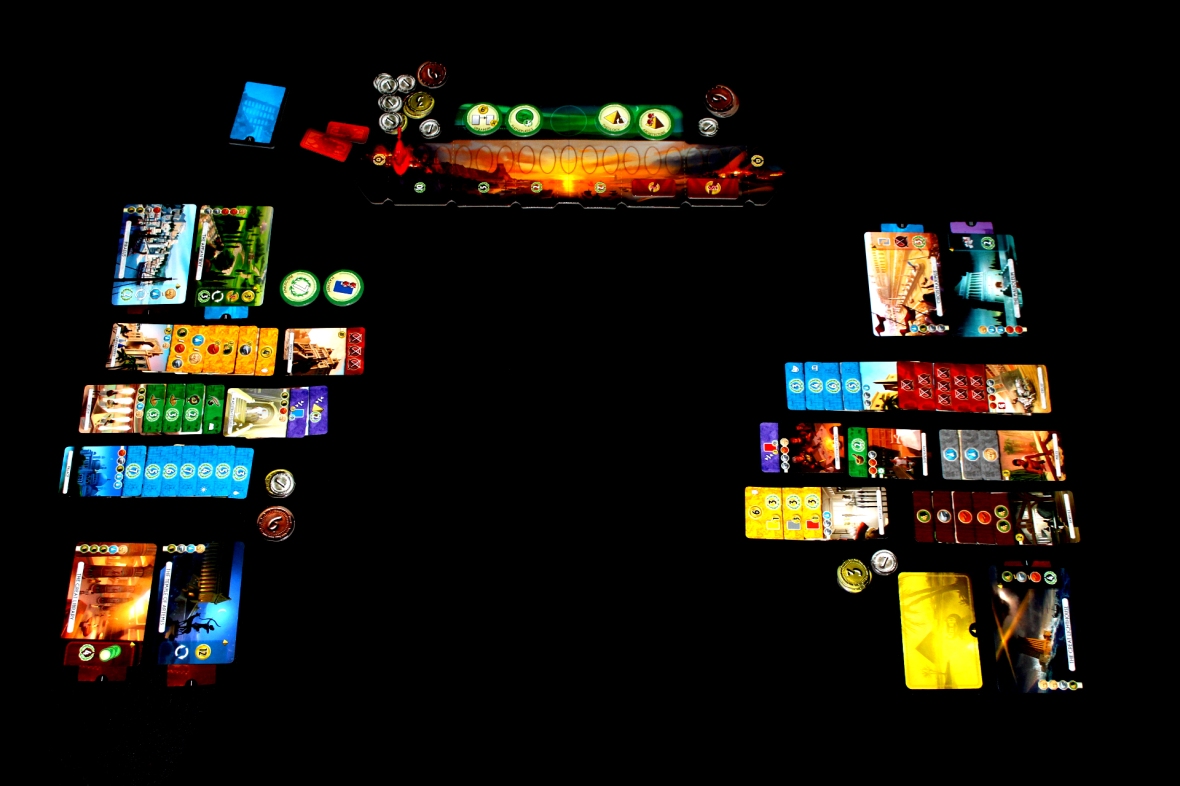 Overall, I like this a lot! I find that I’ll go to it when I’m looking for a cool two-player game to play with someone, as even though it’s luck-based and a lot of hate-drafting it’s still a pretty solidly made game with a lot of cool effects. I generally like its schtick of building the card structures and then going through them each Age, and I like the extra Wonders they added in and the streamlining they did to get here from the original 7 Wonders. I generally feel like if you like the original 7 Wonders, you will probably enjoy this, and I’d recommend checking it out! It’s a novel game for the 7 Wonders fans, and a fun game to pick up if you’re looking for another cool two-player-only game to add to your collection. For those of you that really like Duel, I’m also really looking forward to 7 Wonders: Duel – Pantheon!