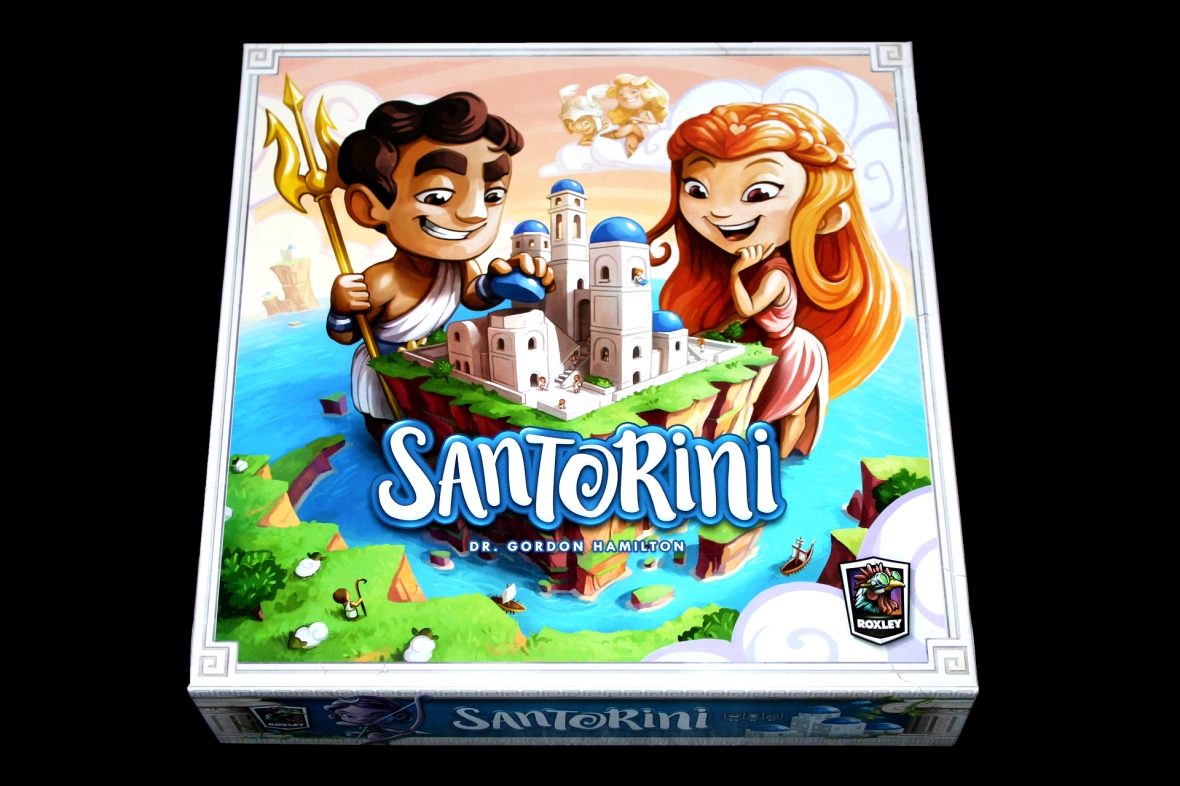 It was a good December for Kickstarter games. One Deck Dungeon, Santorini, Blend Off, and a few other games I had been looking forward to finally arrived. I’ll try to get them on the review queue as quickly as possible, though there is a chance I’ll switch back to biweekly a bit for 2017 just to slow my life down. We’ll see; no guarantees, yet.

Anyways, Santorini purports to be the “first game” (in its lore), as the various figures of Greek Mythology settle their differences not by fighting, but by encouraging the locals to build up on the island of Santorini, with the greatest god being the one who can coax the greatest building skill from the workers. Can you utilize your abilities to push your workers toward success?

This game’s got some cool setup. So, the first thing you’ll notice is two boards and a sort-of-connector thing: 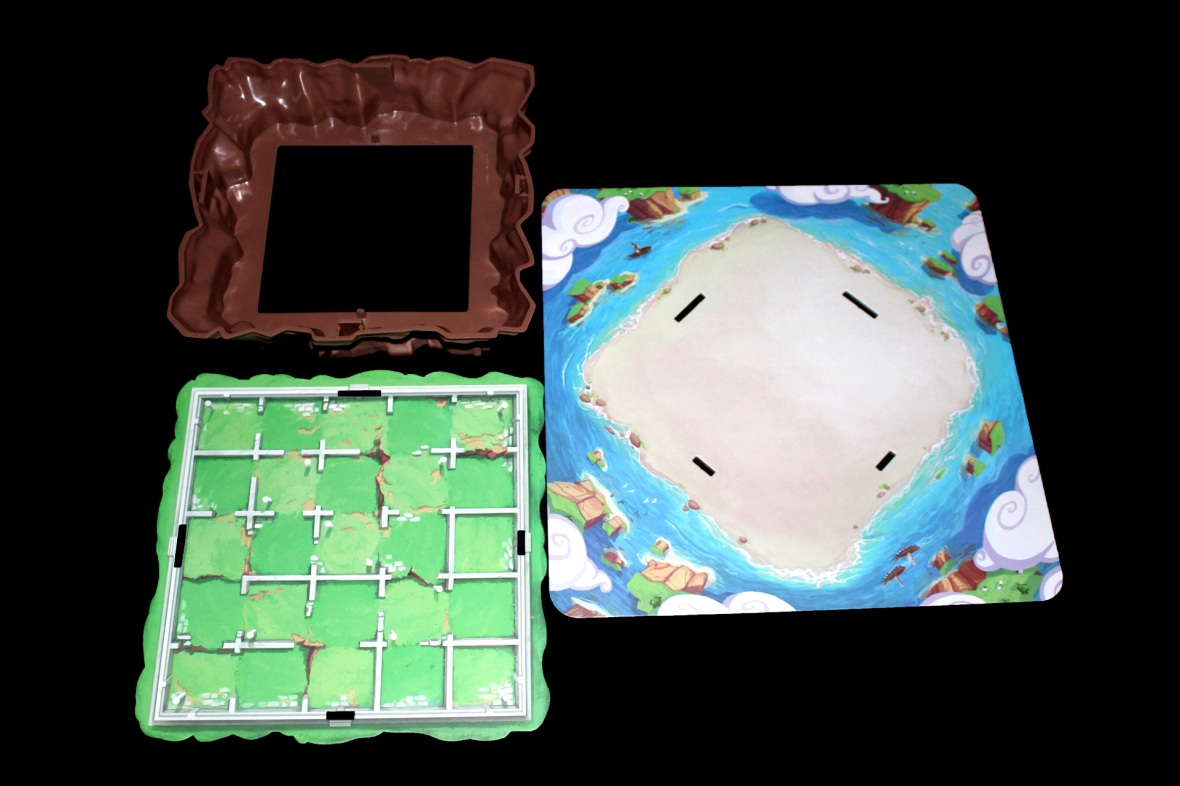 You slap all that together and you get the island of Santorini, which should be slightly elevated.  Next, each player gets a male and female Worker: 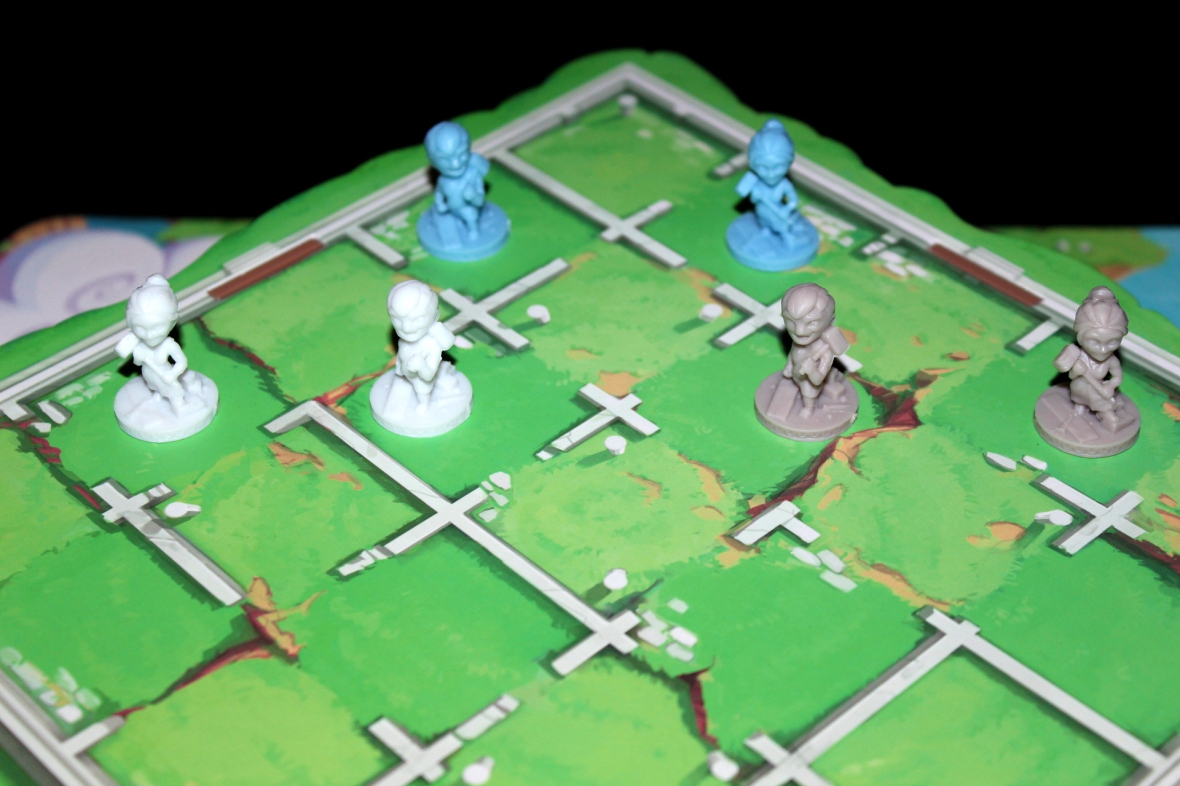 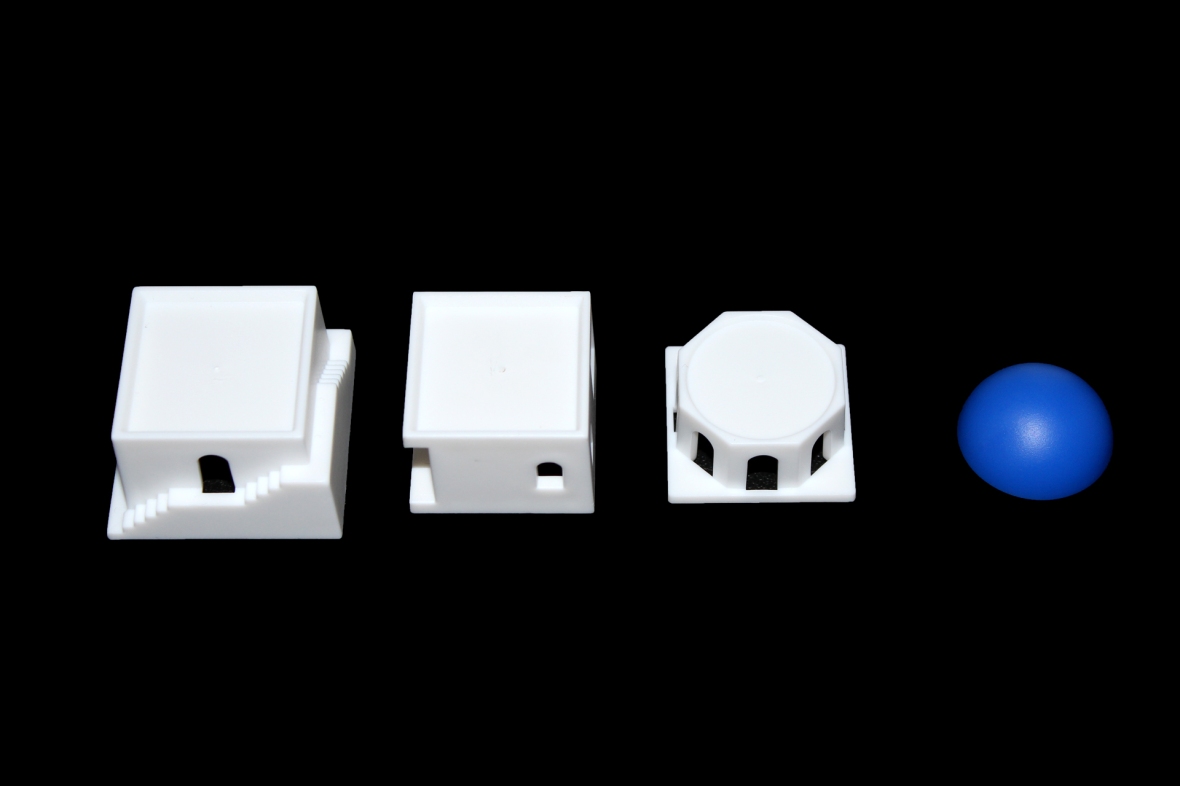 There are more pieces than this — it’s just difficult to edit photos with a lot of random edges, so this is what you get.

Just kind of set those somewhere nearby. You’ll need them for the game. Now, you’ll have some God cards: 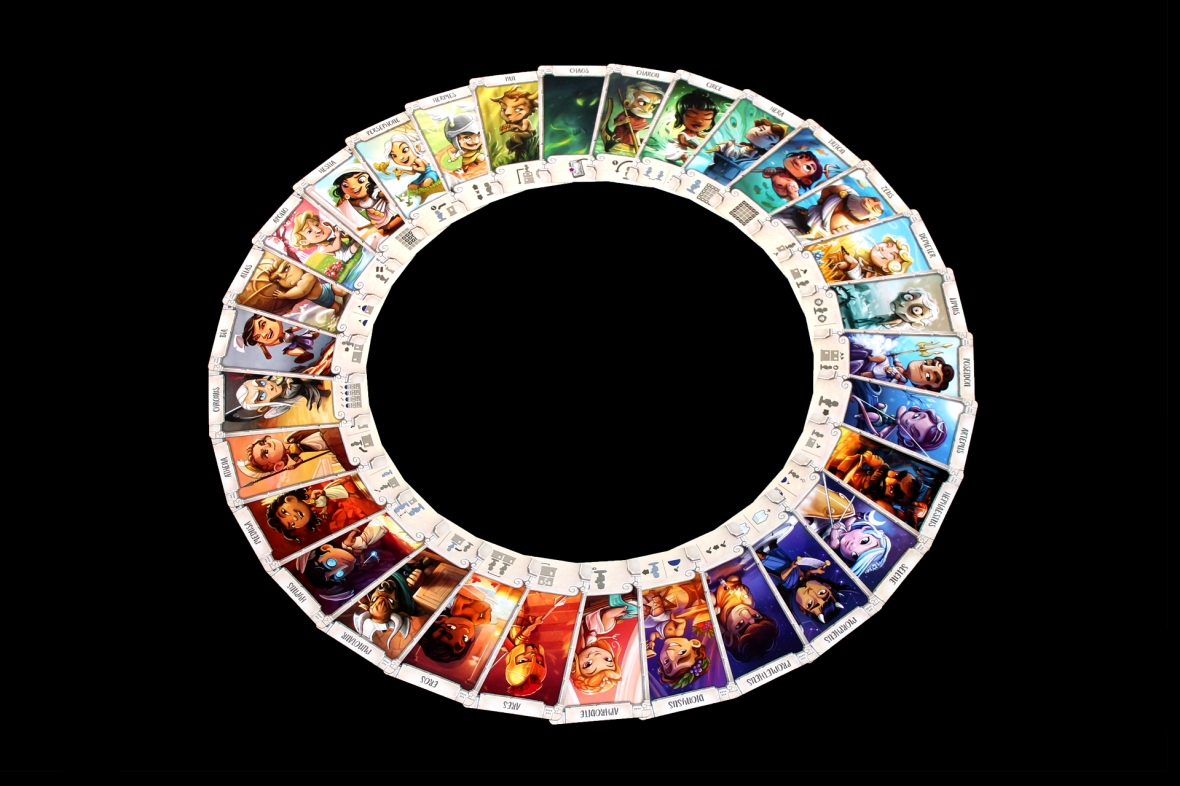 They’re very colorful. For your first game, set them aside — you’re just gonna want to learn the rules, which are incredibly simple. Seriously. And that’s about it! Choose a player to go first, and they place their Workers, then the other players place their Workers. Once everyone’s placed, your area should look like this and then you’re ready to start: 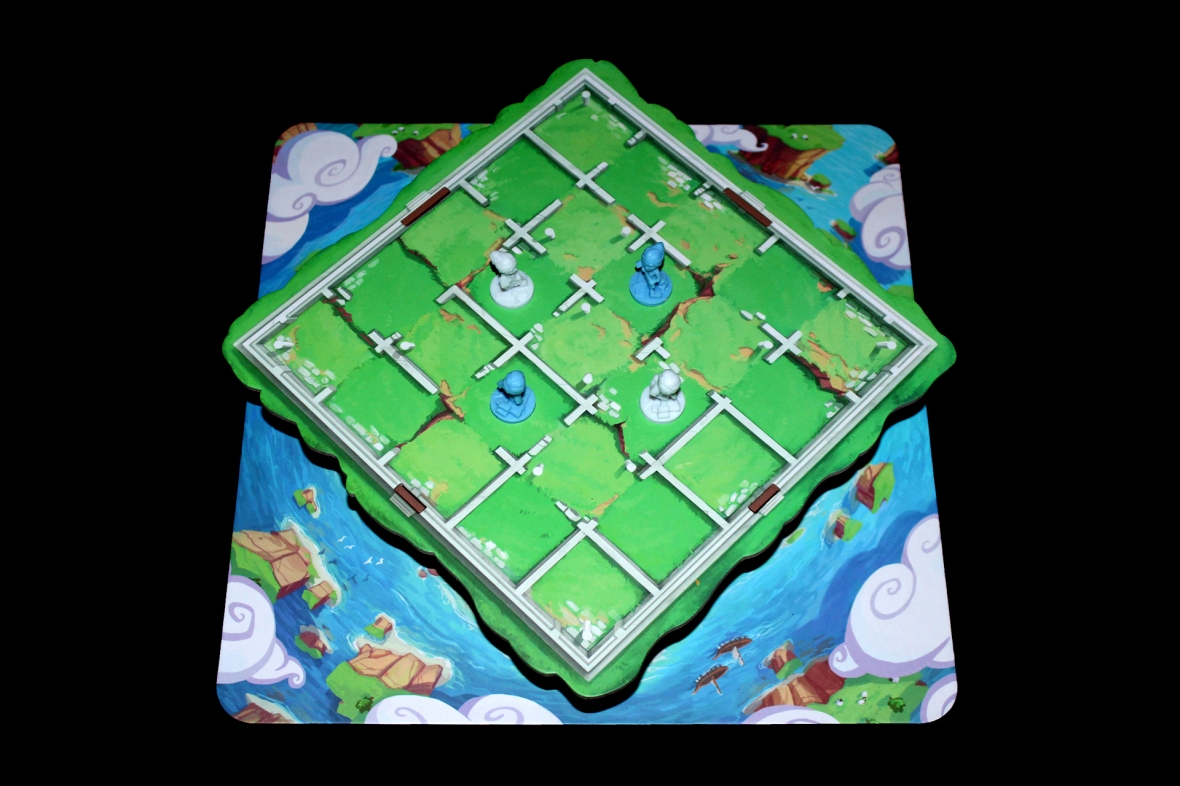 So let’s break this up into sections.

So the basic game is this: On every turn, you must move one of your Workers in any direction (orthogonally or diagonally). You must then build by placing a piece on any of the eight spaces surrounding your piece (if you’re on an edge or in a corner, there will be fewer options). 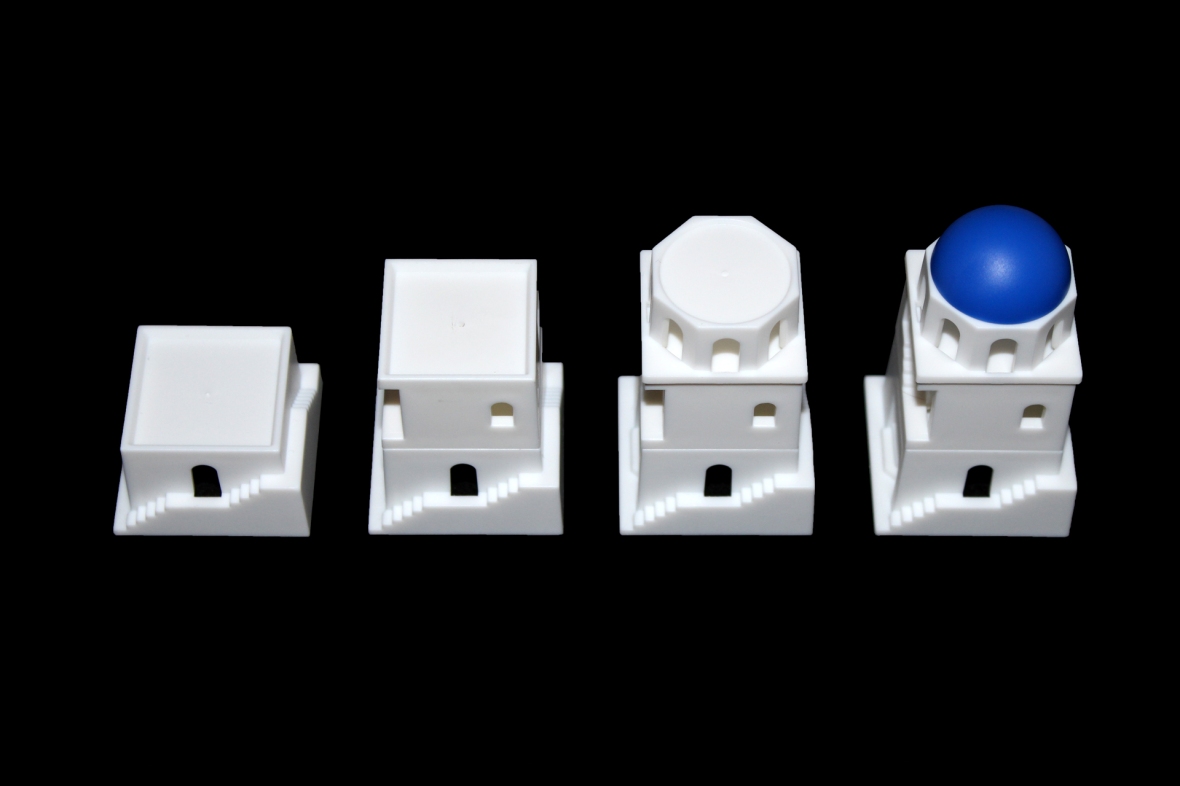 So as I mentioned, if you move up onto the third level, you win! There are a couple game-end caveats:

Continue play until someone wins. Yup. It’s really that simple.

So, as I mentioned earlier, there are a bunch of god cards (and I’m required by some Greek Mythology education to mention that they are not all gods):

Like, 30. That’s a lot. You can use these to augment your game by giving each player a different ability that bends or modifies an in-game rule, sort of the like Apothecaries in Apotheca (but without having to buy them, and only ever getting one per game [generally speaking]).

If you’re looking to get started, there are 10 Basic Gods (numbered 1-10) that are a bit simpler to play with, so you might want to try those first: 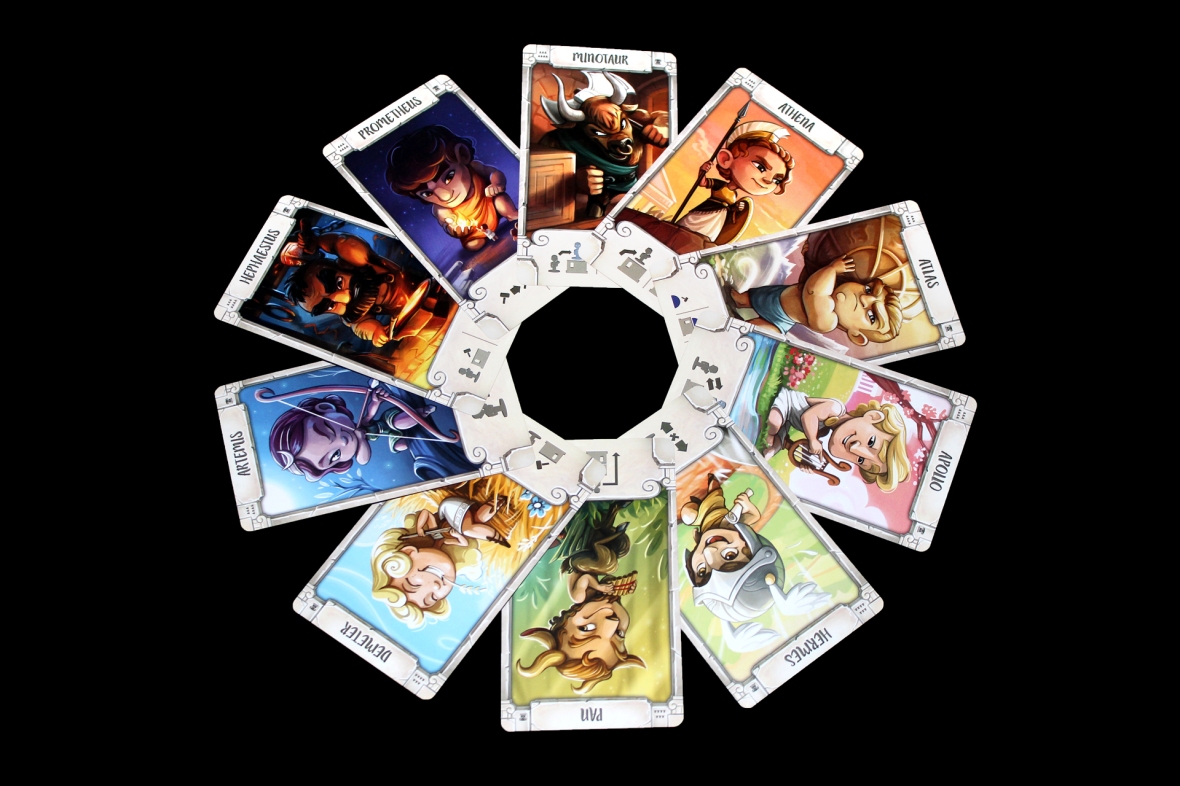 There are ten Basic God Powers! They have a flower in the corner to help identify them.

Once you’ve gotten the handle on that, try mixing in the extra God Powers. Some give you new win conditions (jump down two levels, build five complete towers, have your Workers adjacent to each other on the first level), some give you new abilities (if you don’t move up, you can build, then move, then build; opponents cannot win by moving into a perimeter space; you can push opponents’ Workers if you move into their space), and some are just weird (you can axe-murder your opponents’ Workers, or basically any of the God Powers in the Golden Fleece expansion). It’s a great thing. Try them out, see how you feel about them.

That’s really about it. It takes a solid minute, tops to learn the basic game, and not much longer to learn the God Powers.

The game itself suggests it’s best with two, so I’m inclined to trust it. Note that for three- and four-player games you must play with God Powers. I might have forgotten that my first couple games whoops.

At four, you split into teams of two, and you alternate control of your workers with your teammate. Basically, it’s just that you get two God Powers and you alternate using them. It’s not as weird as it is at three, but it adds extra complexity to the space that I don’t think is super needed. It’s best at two.

A lot of the strategy is matchup-specific, so I’ll try to avoid getting too into the weeds with that. That said, there are a few things you should be mindful of: 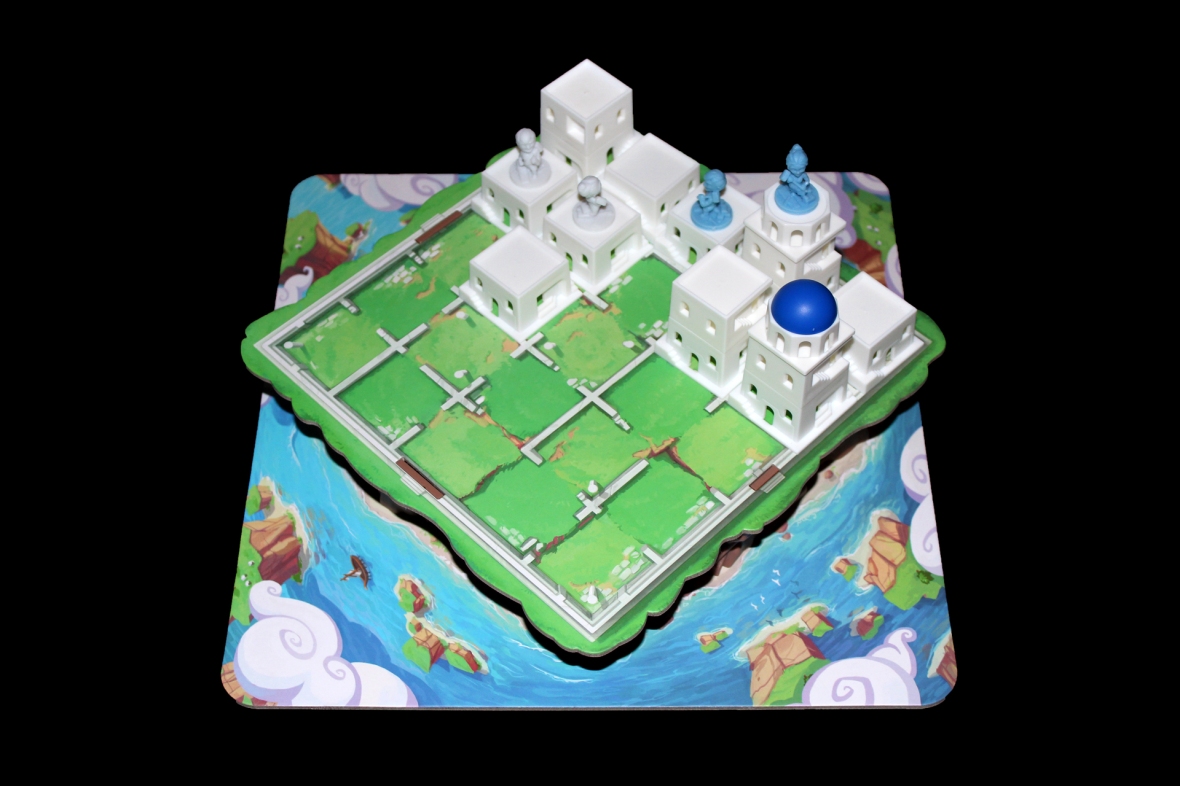 I was going to sit on this review a bit longer to avoid giving it a review out of pure hype, but then the more I waited the higher my score went, so I kicked it out now. Plus, I’ve played 43 games and watched a good 10, so I feel like I’m pretty set in my thoughts on this. My current opinion is that Santorini is incredible! High production value, quality components, amazing art, fun gameplay, short + digestible length, really just firing on all cylinders. I could see myself playing this for a long time, as it’s a satisfying cross between a building game and some abstract strategy, which I really appreciate. I would overwhelmingly recommend this if you’re interested in abstract strategy games, and even if you’re not, it’s still worth a try. I can see this being a mainstay in my collection for a long time to come.