I’ve been at a loss since so many Kickstarter games have been arriving lately: Sol, Word Domination, Solstice, Innovation: Deluxe, Rewordable, and countless others. Add in some new purchases like Bärenpark, New York Slice, and Between Two Cities: Capitals and I’ve pretty much been playing new games for a while. Which, in my opinion, makes it impressive that I’ve gotten in enough plays to get any of these reviewed (much less several of them), so here we go!

In Word Domination (at least, the non-cooperative version), you play as many different supervillains vying for the world’s priceless treasures, like Old Faithful, the Eiffel Tower, or … Italy. Guess you figure you might as well take it while the taking’s good. To assist with the myriad thefts you’ll need to commit, you’ve got some dastardly zeppelins to help, well, you know, lift stuff. If you manage to steal enough, then everyone will truly know that you’re the worst. Will you prove yourself a villain among villains? Or will you, like your zeppelins, just be mostly full of hot air?

So there’s a cooperative mode and a competitive mode, so I’ll talk about each in turn.

First thing’s first: which villain will you be? Give each player a player mat with a character: 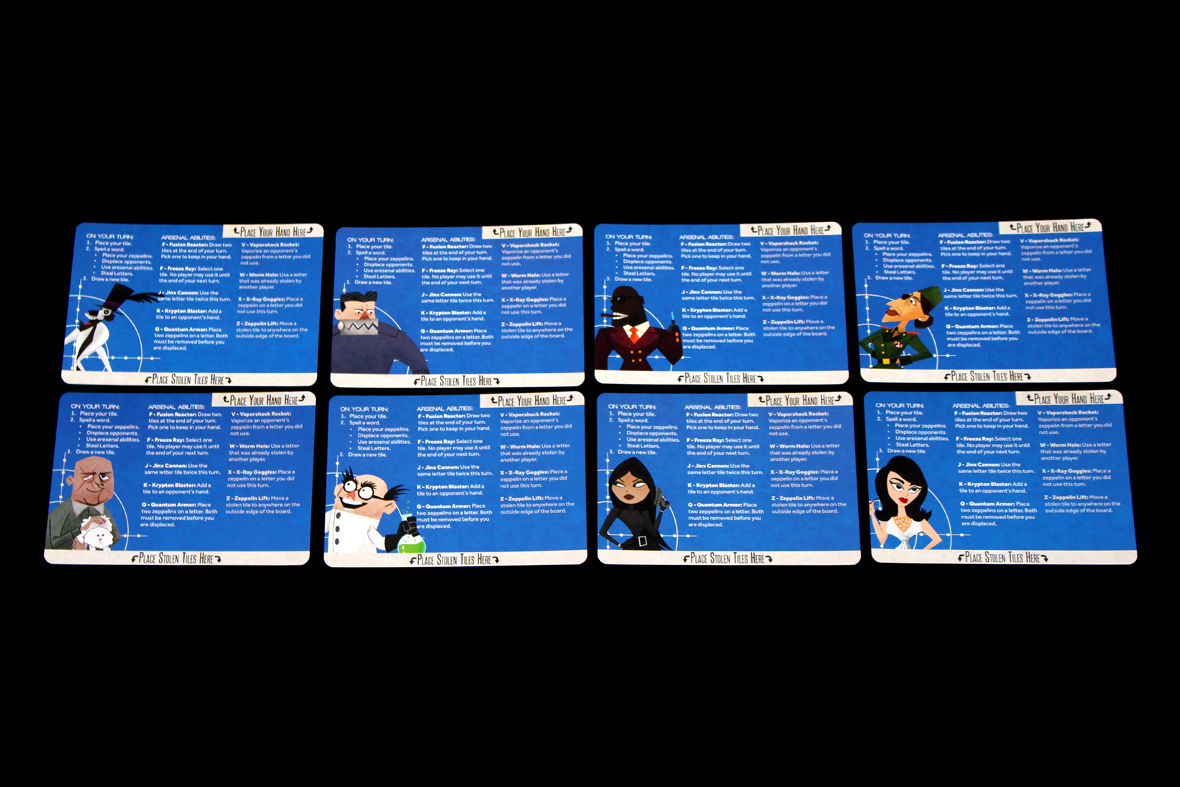 If it’s your first game, you should play on the blue side. In later games, you can use the ability on the other side, if you want.

Next, give each player some zeppelins: 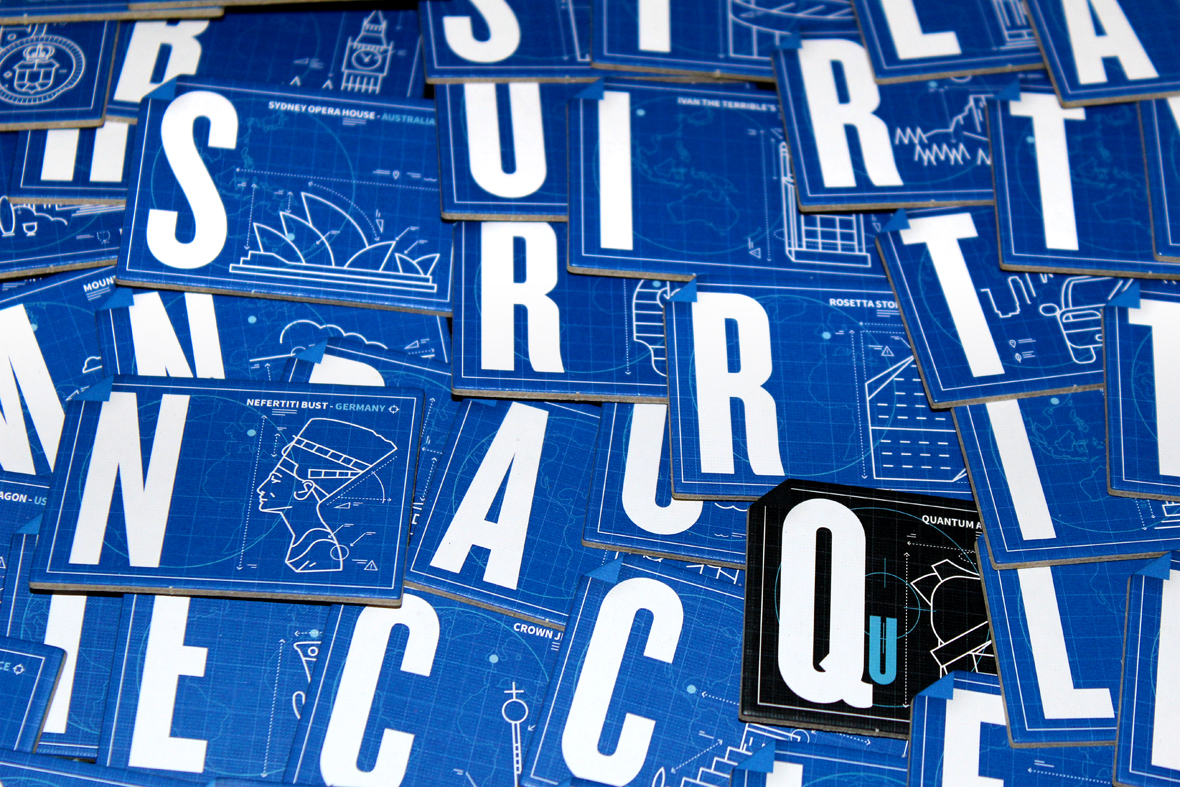 Use them to create a grid, based on the number of players you have.

Finally, pick a player to start the game and have them put the round tracker on the Round Mat:

Once you’ve done all that, give each player a tile (to form their starting “hand”) and you should be ready to start!

Just like in the competitive game, give each player some zeppelins:

Use them to create a grid of four 3 x 2 sub-grids, laid out like so:

Finally, pick a player to start the game and have them put a zeppelin of any color on the Round Mat:

Once you’ve done all that, give each player a tile (to form their starting “hand”) and place the Police Tracker between any of the four sub-grids and you should be ready to start!

So the competitive game is played over 6 rounds. After a complete cycle of player turns, have the Start Player advance the Round Tracker by one. At the end of Round 6, the game ends.

On each turn, you’ll do the following:

Add Your Hand to the Grid

Now, spell a word. It must be a valid English word, no proper nouns, and it cannot have already been spelled before by another player (and no prefix / suffix nonsense; if it’s the same root word, you can’t use it). Whenever you use a letter, place one of your zeppelins on it. Again, you must use the letter you added this turn in your word. Other rules:

If you find that you’ve used a black Arsenal Tile, you gain an extra Arsenal ability for that turn. It may let you block certain letters from being used, use a letter twice, add a zeppelin to a word you didn’t use, or any other crazy effect. These are some serious supervillain weapons probably.

If you’ve placed a zeppelin onto a tile with an opponent’s zeppelin, return their zeppelin to them. If you forget to do this, it will hurt you later.

Once you’ve done that, if you placed a zeppelin onto a tile that already has one or more of your zeppelins, you steal the letter! Remove it from the board, replacing it with the top tile from the stack (upside-down) on the “STOLEN” side. Add the tile to your stash, and place a zeppelin on the “STOLEN” tile in the grid. As you do this, more tiles will be stolen, so the grid will ultimately look a bit like this:

Those will be worth points at the end of the game, so try to steal letters that are orthogonally adjacent to each other.

Note that if you place a zeppelin onto a tile that has a zeppelin of yours and a zeppelin of your opponent’s (in this case, they forgot to boot you on a previous turn), you still steal the tile. You’re supervillains. Yes, it’s mean, but that’s the rules.

You can steal more than one letter in a turn.

Take a tile from the top of the stack and add it to your hand. Your turn ends.

There are specific rules for how you can help other players. If you’d like to make your opponent an offer, tell them this:

They can accept or reject your offer. If they accept, you may add your zeppelin to the letter you claimed as payment, and may steal it if you already have a zeppelin on it. If it is an Arsenal Tile, you may use that ability as though it were your turn. If they reject, you may make more offers.

I am obliged by the rulebook to remind you that it’s poor etiquette to offer opponents low-quality words so that you can force their hand. It’s … it’s a game, so don’t be a jerk.

Once all players have gotten through Round 6, it’s time to score. Remember your board?

Well, now it’s time to tally points. Every STOLEN tile is worth one point for the player controlling it, unless it’s part of a group of three or more connected STOLEN tiles. If that’s the case, each tile is worth 2 points. That’s pretty good!

If you control tiles that haven’t been stolen (such as the “T” in this case), they can be used to “bridge” two groups of tiles together, and the STOLEN tiles in those bridged groups count as part of the same group. Use that to gain even more points. In the above photo, the T connects two groups of two tiles into one group of four tiles, meaning they’re worth eight points total, rather than four!

This is a bit different, but plays by the same principles.

So, you’re working together as minions of a great supervillain to steal one of the greatest prizes of all: the Eiffel Tower! Unfortunately, it’s kind of … bolted to the ground, so you’ll have to cut through the legs first so that your boss can swoop in with a giant zeppelin and pick it up. As you do. If managing the crowd wasn’t enough, you also have to worry about the cops noticing you cutting through the legs of a priceless monument. It’s going to be tough!

First, decide on your difficulty:

Those may not mean much, yet. Well, now, each player should build their Tool Box. Choose tiles from the stack and add them to your player area. You may want to pick at least one vowel and remember that RSTLNE are six of the most common English letters. That said, if you see a lot of I’s and N’s on the board, a G might not be a terrible choice. Play it by ear. You’ll start with zero tourists.

Everyone plays turns until you either win or lose. You lose when:

So, try not to do either of those.

On your turn, much like the competitive version, you’ll spell a word using tiles from the grid you set up earlier or from your Tool Box. Your Tool Box tiles are never “spent”, they’re just permanently available to use. As you accrue Tourists, you can use their tiles as well to scare them off. You’ll place zeppelins (minions) on any tiles you use on the tower legs. Generally, I explicitly forbid players from telling other players words on their turn. Prevents some quarterbacking and lets players feel like they have their own turns. I find it’s better / more fun for everyone, this way.

Arsenal abilities don’t work like they usually do. Instead, they all have the same ability, which is “one fewer Tourist will arrive this turn, to a minimum of 0”.

If any player places a second zeppelin onto a tile, it’s stolen. Flip it over. If all of the tiles in one of the sub-grids are stolen, you’ve cut through a leg! It … makes a very loud noise, which immediately attracts three Tourists, so be careful. If that pushes you over your limit, you automatically lose.

After every player’s turn, the security guard makes a clockwise sweep around the tower, moving between the next two legs in sequence. If, during that sweep, he’d pass any zeppelin tokens, he captures them. If he ever captures three or more, you lose. So don’t let him do that. Each time he completes a full rotation around the tower, advance the Round Counter by one.

Once he’s moved, add Tourists! You should add a number of Tourists equal to the Round Counter. Yes, that means at Round 6 you’ll be adding six Tourists per turn, so be wary of that.

If you haven’t lost by the time you cut through the fourth leg (or haven’t lost immediately after that with the influx of new tourists), your boss comes and picks you and the rest of the minions up in his Mega-Zeppelin (along with the Tower!). You win!

Generally, as with most games with direct player interaction, I find adding more players to be a bit frustrating as you now have to account for more variation between turns. It’s thankfully not possible for someone to steal a letter from you before you get another turn (unless they have an Arsenal ability, in which case, oof), but it starts to require a delicate balance of all players blocking each other or one person will be able to shoot out in front. This is a difficult technique to master (I find that new players often don’t notice this), and is also much the reason why I don’t play Carcassonne with more than two people. I personally recommend it at two. If you want a more hectic, aggressive game, play with more people.

As far as the cooperative game goes, it doesn’t really matter how many players you play with provided all the players are about the same skill level, especially given how I’ve recommended playing. If you don’t play that way, then, well, your risk.

I’ll just mark these ones where it matters. 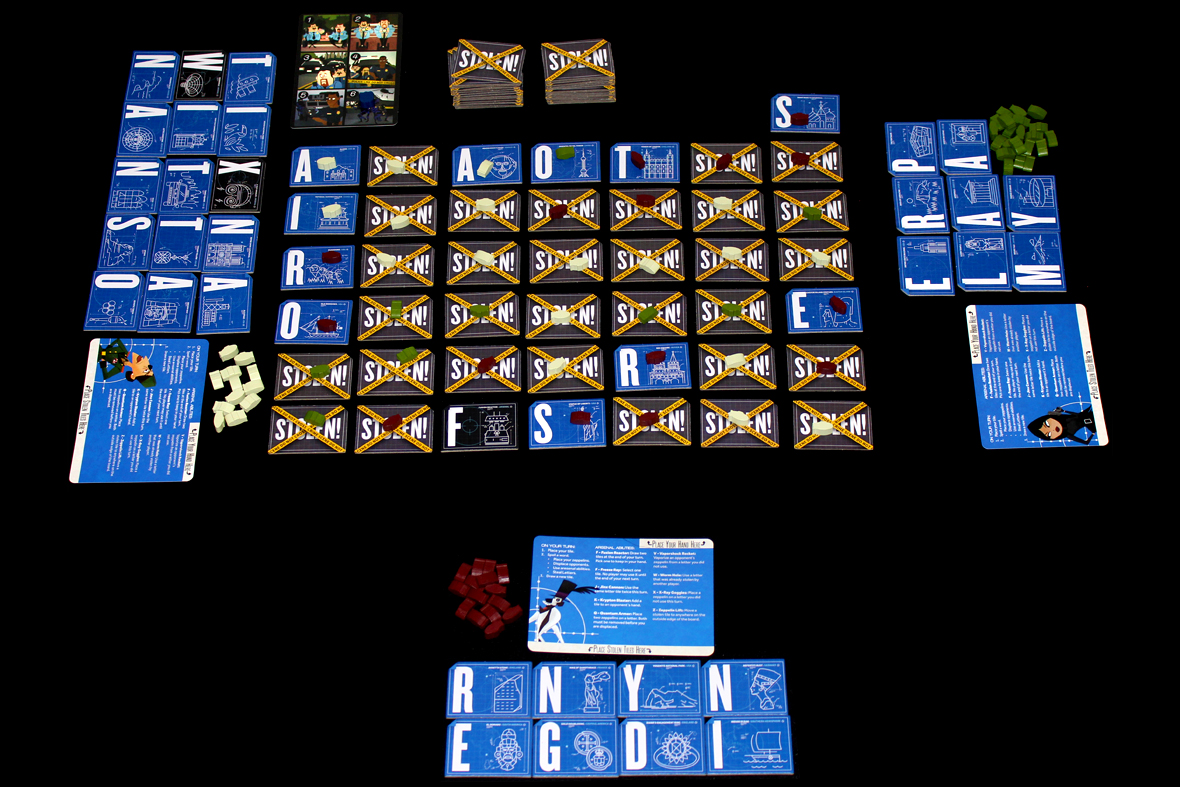 Overall, Word Domination is awesome. I mean it; I really like it a lot. It does what a lot of my favorite word games do, in that it takes a word game and applies a fun spin on the concept (like Paperback / Hardback) to create something genuinely really fun. I’ve enjoyed the games I’ve played and it feels like a fairly different experience each time, just because we frequently get a very different grid of letters (and spell very different words). The mechanics are very well polished. Everyone I’ve played it with has asked to play it again immediately after we finish, and I’d honestly highly recommend it.