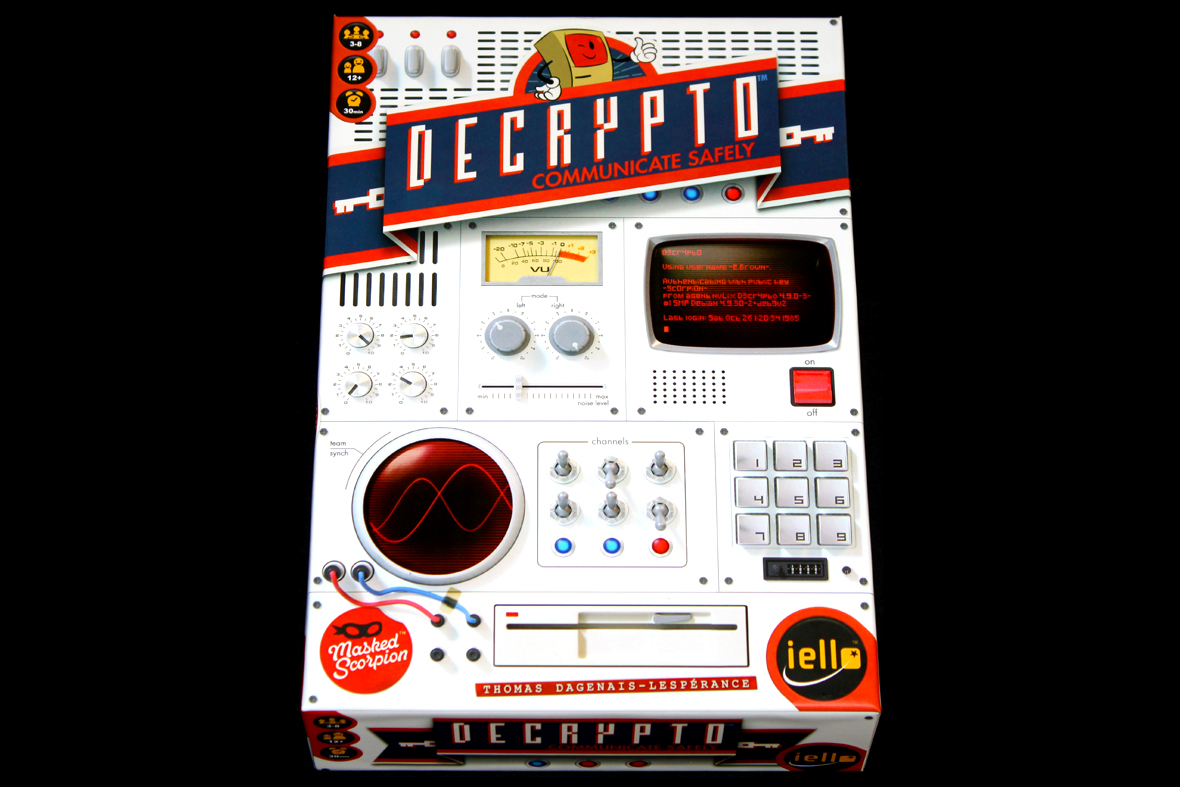 Full disclosure: A review copy of Decrypto was provided by IELLO.

Like I said in my NewSpeak review, I’m trying games that have something in common when I can (unless the thing in common is that they have the same publisher or are the same game / expansion; I prefer to split those up over separate weeks), and given that Decrypto is also a team-based game about cracking another team’s code, it seems like a perfect matchup.

In Decrypto, well, both teams are passing coded messages between them with only some keywords to help decrypt them. Try to figure out the ordering, but be careful! There are others eavesdropping on your messages, and if they can decrypt your clues, well, you’re going to be in an extremely bad way. That’s a two-way street, however, so you can try and counter-hack them. Just make sure you, you know, don’t forget to decrypt your own clues. Will you be able to crack the codes? Or will they remain an unsolvable enigma?

Not a ton of setup, here. Split into two teams; white and black. Take your screens and your Keyword Cards (the red side is a bit “easier”, whereas the blue side is “harder”):

Slide four Keyword Cards into the screens, as shown above. Give each team their Code Cards:

Set aside the white Interception Tokens and the black Miscommunication Tokens, as well:

Put the sand timer somewhere, and give each team a score / note sheet:

You should be ready to go! 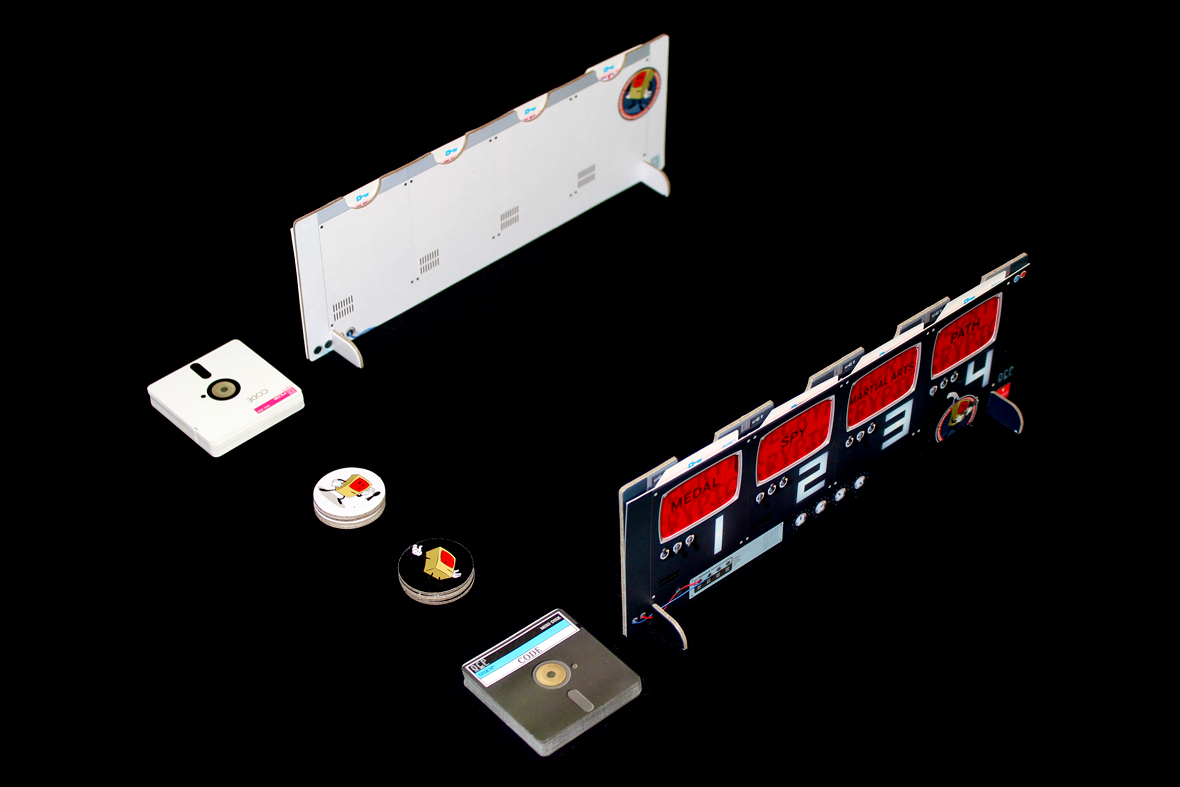 A game of Decrypto is played over 10 rounds, maximum, where each team attempts to decrypt both their team’s code and their opponents’ code. If you successfully decrypt your opponents, you gain an Interception token; fail to decrypt your own, and you gain a Miscommunication token. If you ever have two of either, the game ends. Two Interceptions is a victory; two Miscommunications is a loss. Let’s dig in a bit deeper to how the game plays to see how that all works.

So, each round, white team will go first (the ordering doesn’t really matter; you could change it up, if you wanted). The process is the same, so I’ll describe it generically. Both teams will draw a Code Card and the current codegiver for the active team will look at it and show nobody else. The inactive team will do nothing, right now. The active codegiver then looks at their four Keywords. Let’s say they’re:

The codegiver has to give three clues (of any length, unlike Codenames) in the order corresponding to the ordering on their card (which is three unique numbers between 1 and 4, inclusive). So, for instance, if their Code Card said 2.3.1, they might give the clues:

Both teams now need to try and figure out the ordering. Write down the clues, and then write down what you think the ordering must be based on the clues given. Note that, as with all games of this form, there are rules for clues:

What clues would you give?

The teams then switch roles, and go through it again, this time with the active team as the inactive team and vice-versa. Note that teams cannot Intercept each other during the first round. Even then, I find it fun to guess, so, whatever. You don’t have any information, so it would just be rewarding a team for being lucky, which isn’t terribly interesting.

If the game ends with a tie (a team can simultaneously win and lose, for instance), you can technically count Miscommunications as -1 and Interceptions as +1 and the team with the most points wins, but that’s kind of … boring. Instead, skip that and go for the final tiebreaker — whichever team can guess more of the other team’s Keywords wins! It’s … tough.

This is one of those games that, like Codenames, I prefer at lower player counts. At higher player counts, you just kind of have more … noise, and there’s less for an individual player to do. That said, there’s a specific variant for three players:

At three, you play with only one team. The third player is trying to intercept that team twice within 5 rounds. Instead of the team getting Miscommunication tokens, they just give an Interception token to the third player. That’s it.

Either way, I kind of most like this game at four, but I’d be interested in trying it at three players. 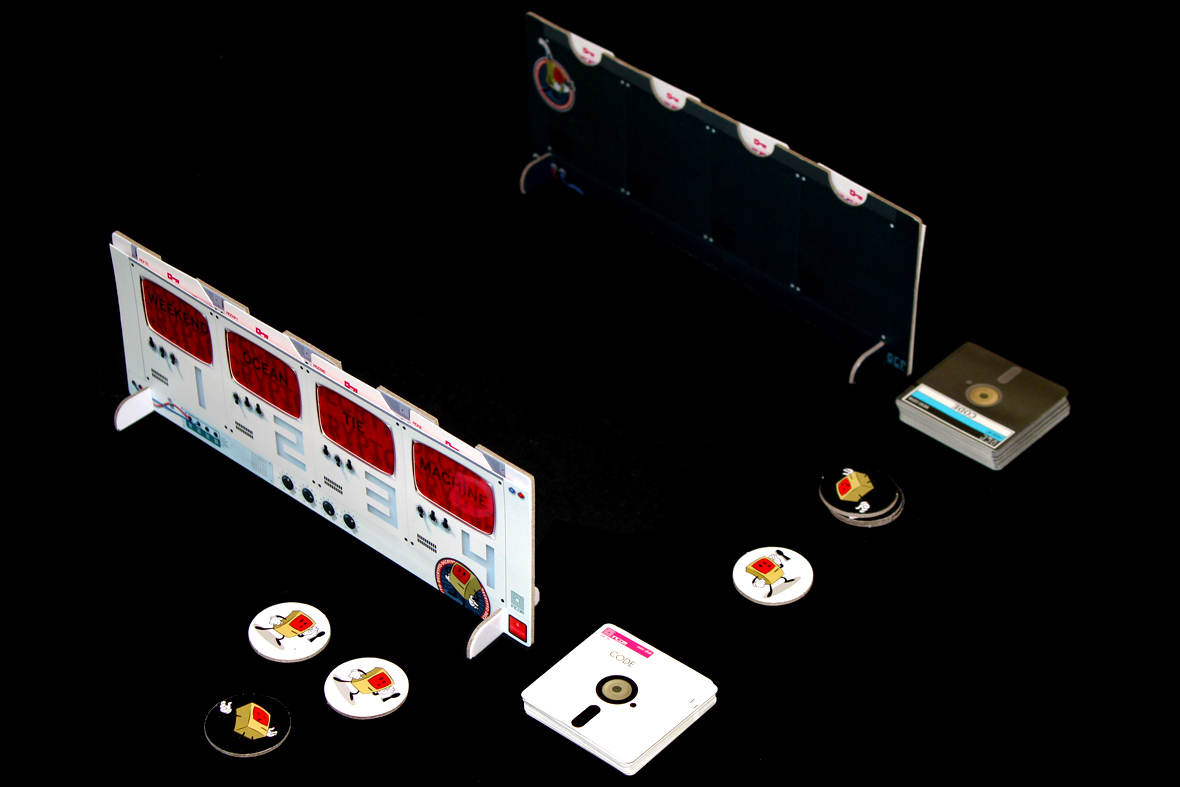 Overall, I’m quite fond of Decrypto! I think it’s the exact thing I was looking for: a game that, when I’m hosting a game night and someone suggests Codenames, I can use as a slightly-weightier game that holds my interest a bit better. I think my issue with Codenames is that it’s often used as a blunt instrument for 6 – 10 people, and that means that there are a lot of people without a clear purpose in that game. I generally don’t like that kind of paradigm, as it usually means that someone is sitting around waiting for something more interesting than what’s currently happening to happen. With Decrypto, I think there are more things you can be doing with those extra cycles, and more interesting ways to contribute to the group’s goals. That said, I think that comes with some complexity cost, and I think you’ll see more people with Codenames in their home than Decrypto for that exact reason; Codenames is kind of timelessly simple, whereas Decrypto is just complicated enough that I think it risks not penetrating the mass market veil fully. That said, it makes a great gift, and I think it’s a hoot to play, so if you’re looking for another team deduction game that’s a solid fit for a board game night, I’d highly recommend checking out Decrypto!