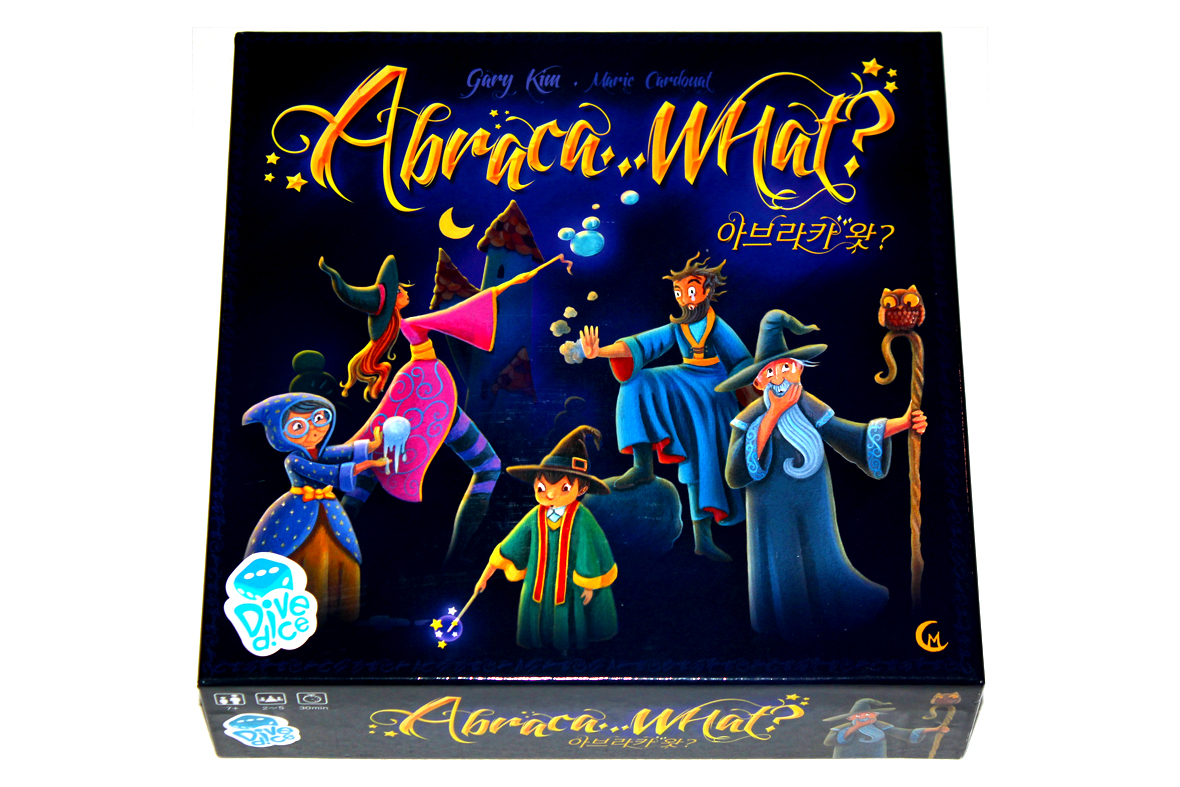 Full disclosure: A review copy of Abracada…What? was provided by Nice Game Shop.

More from Nice Game Shop! This one is Abracada… What?, or Abraca… What?, as it was originally published. I previously covered the Venice Connection set, and there’s even more coming down the pipeline; games about tennis, dragons, medicine, drunk cats, you know, the standard stuff. Let’s find out more about this obviously wizard game; I’m excited!

In Abracada… What?, you play as wizards who have uncovered a legendary tower, where a powerful magical tome is said to rest. Naturally, there’s only one tome, so you have to fight over it. The problem is, your spells aren’t working the way they used to. Maybe it’s the tower? Maybe it’s you? Who knows. The only thing you do know is that you need that tome, and even if you’re not totally sure how your spells are working now, you’re pretty sure you can fight off the other wizards. Will you end up being right? Or does this just spell doom for you?

Setup is surprisingly complicated, because of these bad boys: 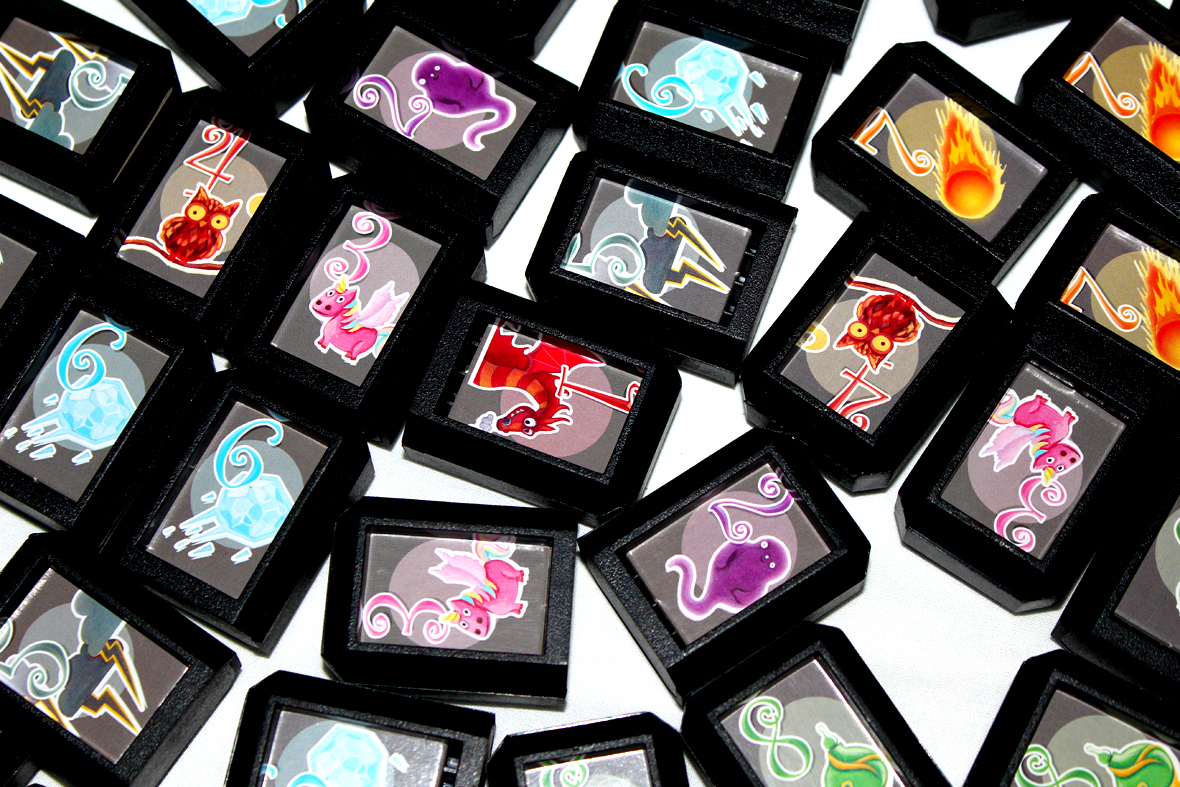 The Spellstones are your magic spellcasting tools, and they’re all a mess. Place them face-down and scramble them up! Give each player 5, and have them stand up and face the other players. That’s going to make things weird. Set four of them aside, face-down.

Set the board in the middle of your play area: 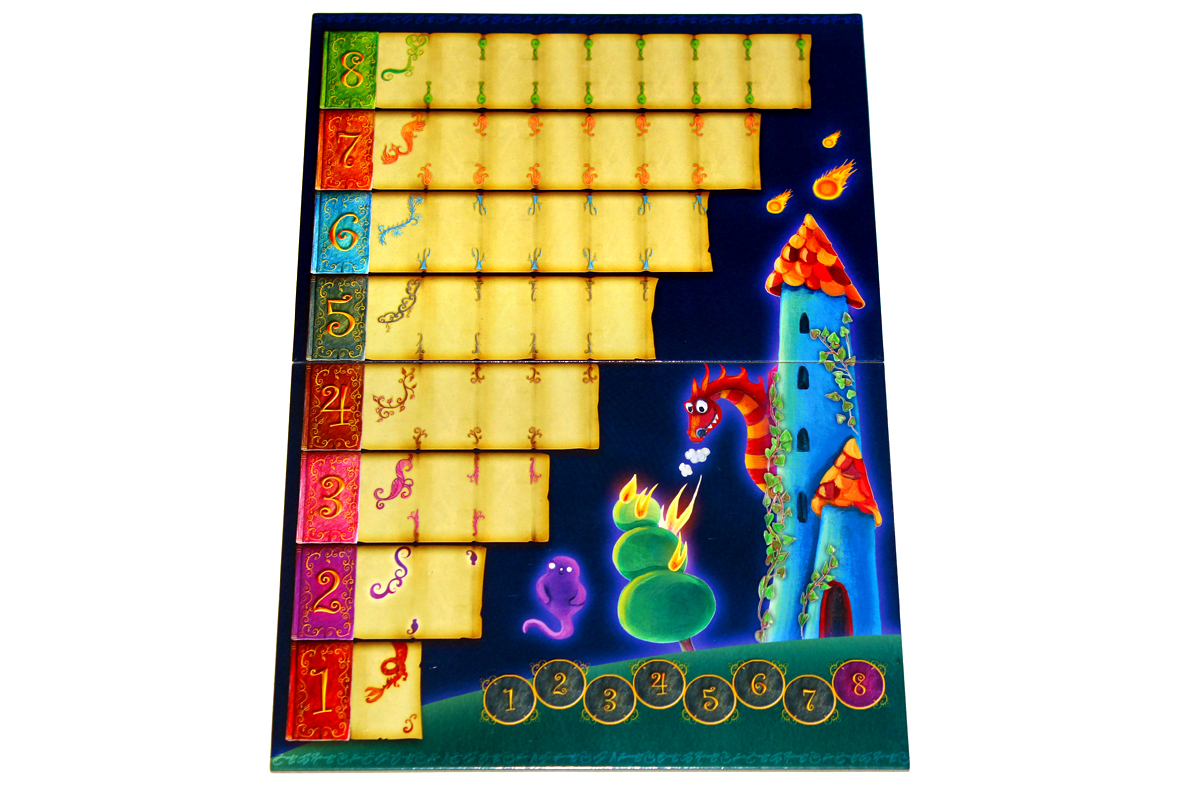 Give each player a reference sheet: 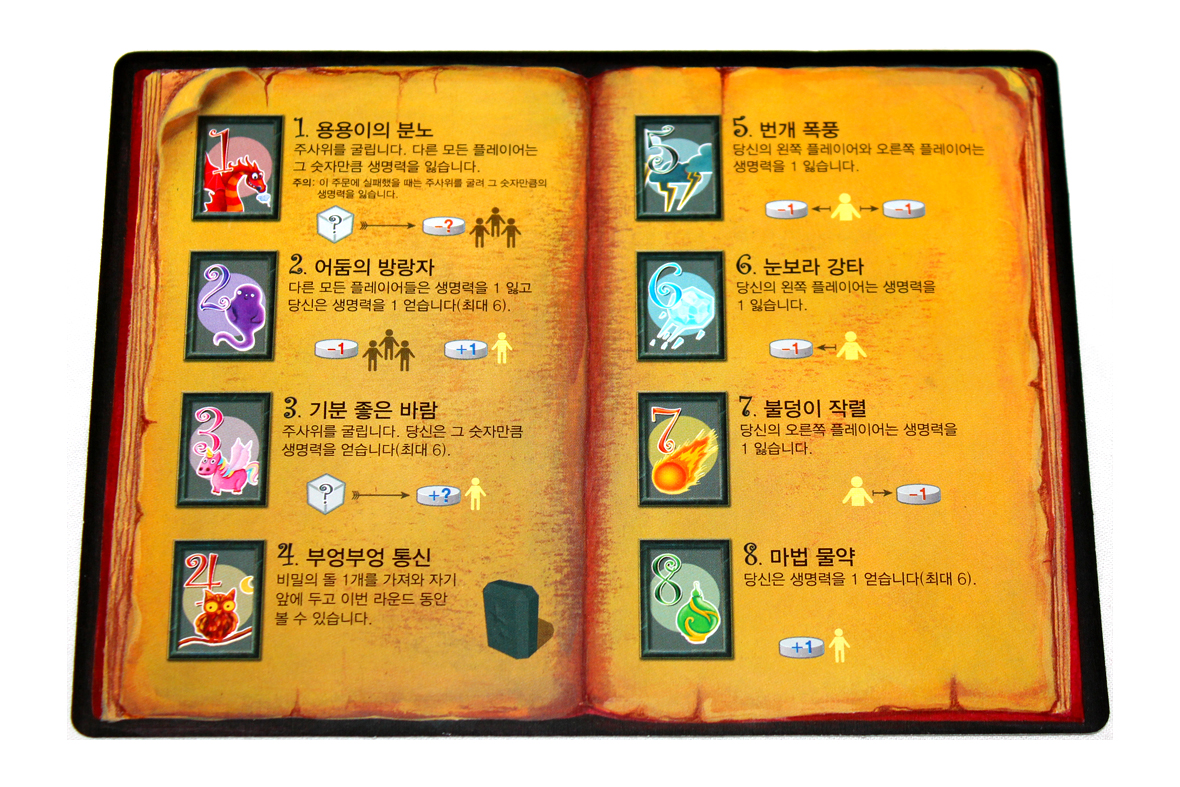 Yup. Mine’s in Korean. That’s how it goes, sometimes. Thankfully I looked it up; more on that later. Then give every player their life tokens: 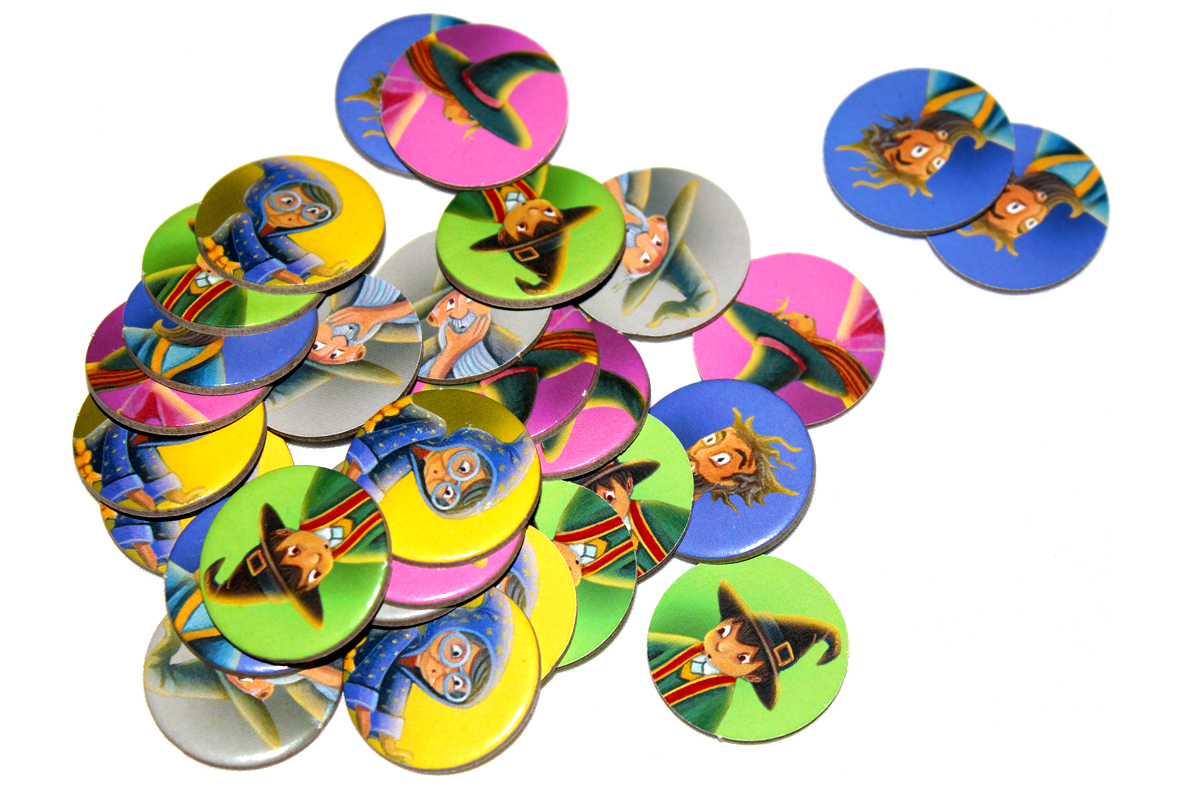 And set their point markers near the board: 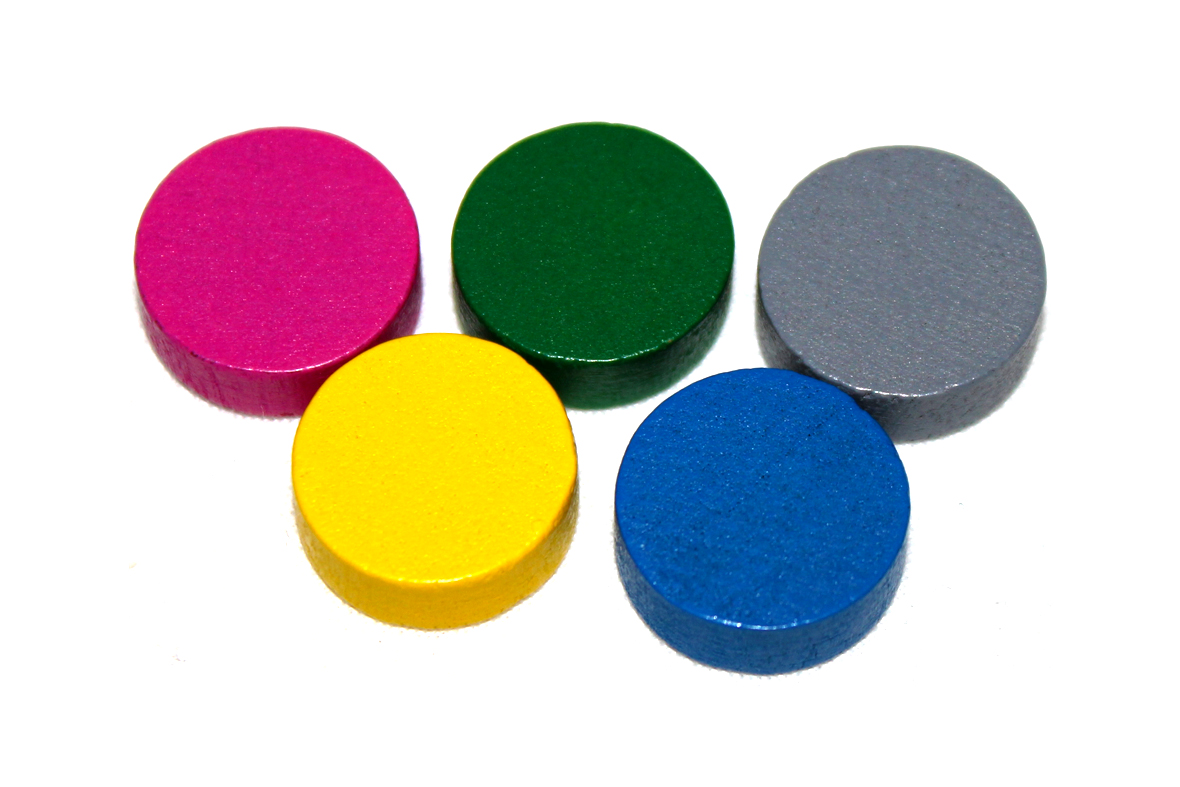 If you’re playing with lower player counts, you’ll want to reveal some Spellstones and put them on their spots on the board:

Finally, place the die somewhere within reach of other players: 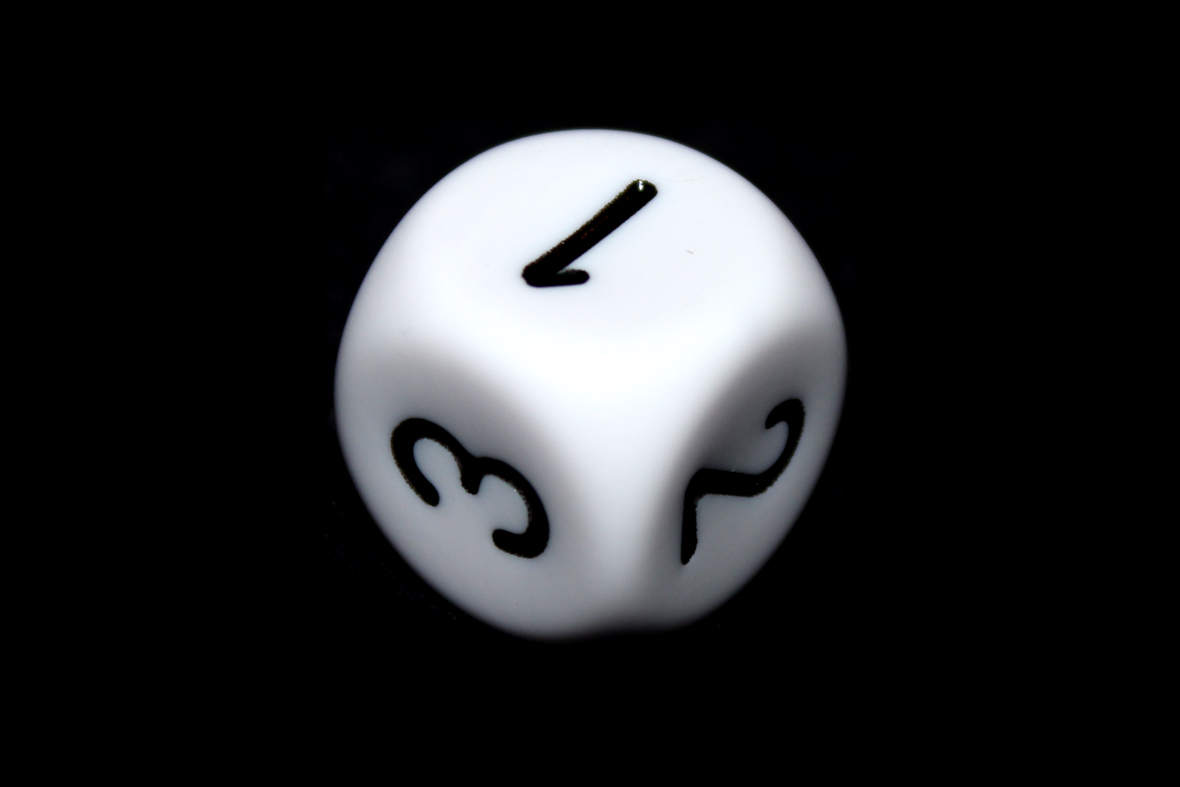 Once you do that, you’re ready to start! 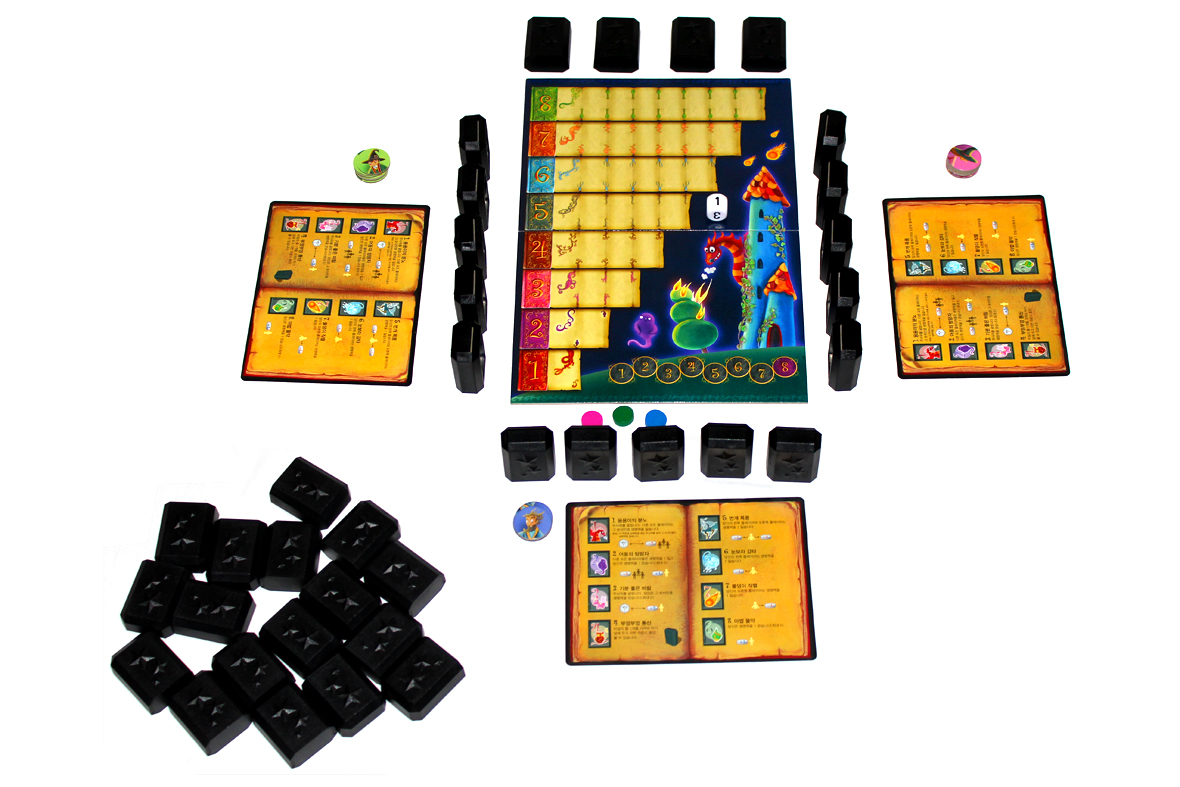 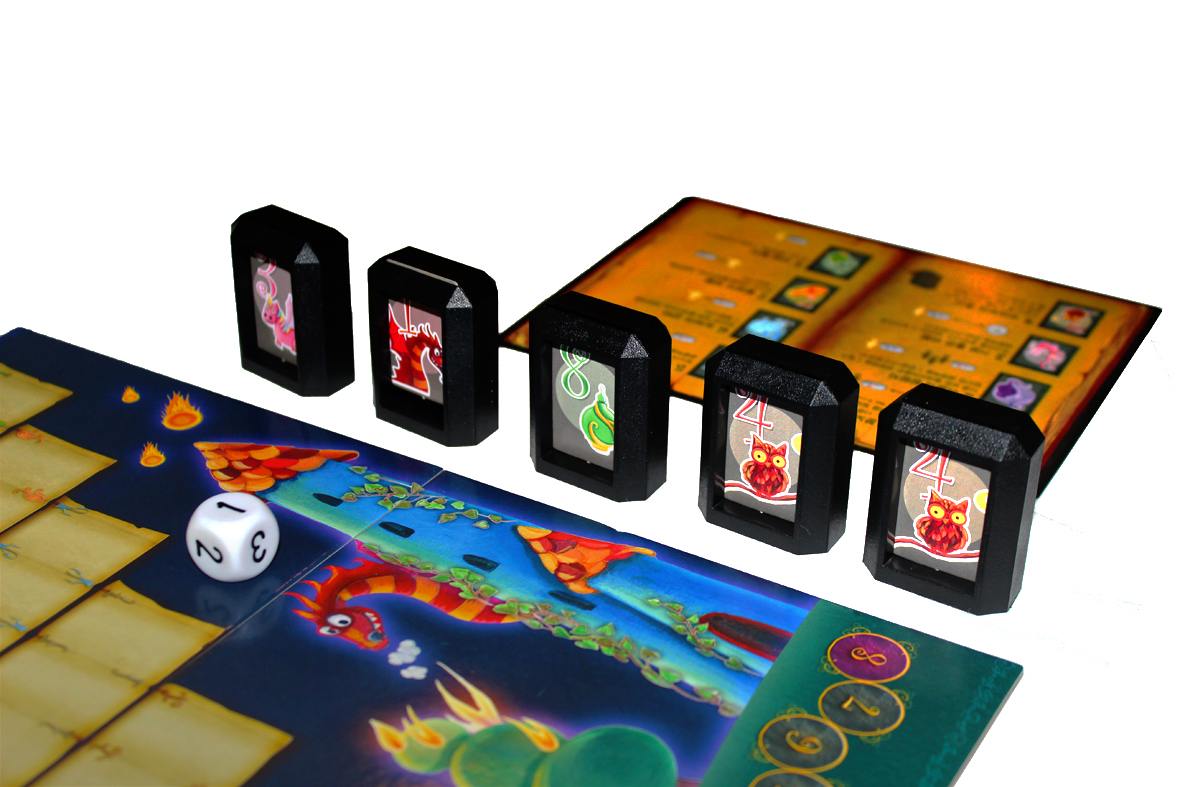 Your goal is to eliminate other players’ health so that you alone can ascend the tower and claim that powerful tome. You’ll do this by casting spells!

On your turn, shout a spell! 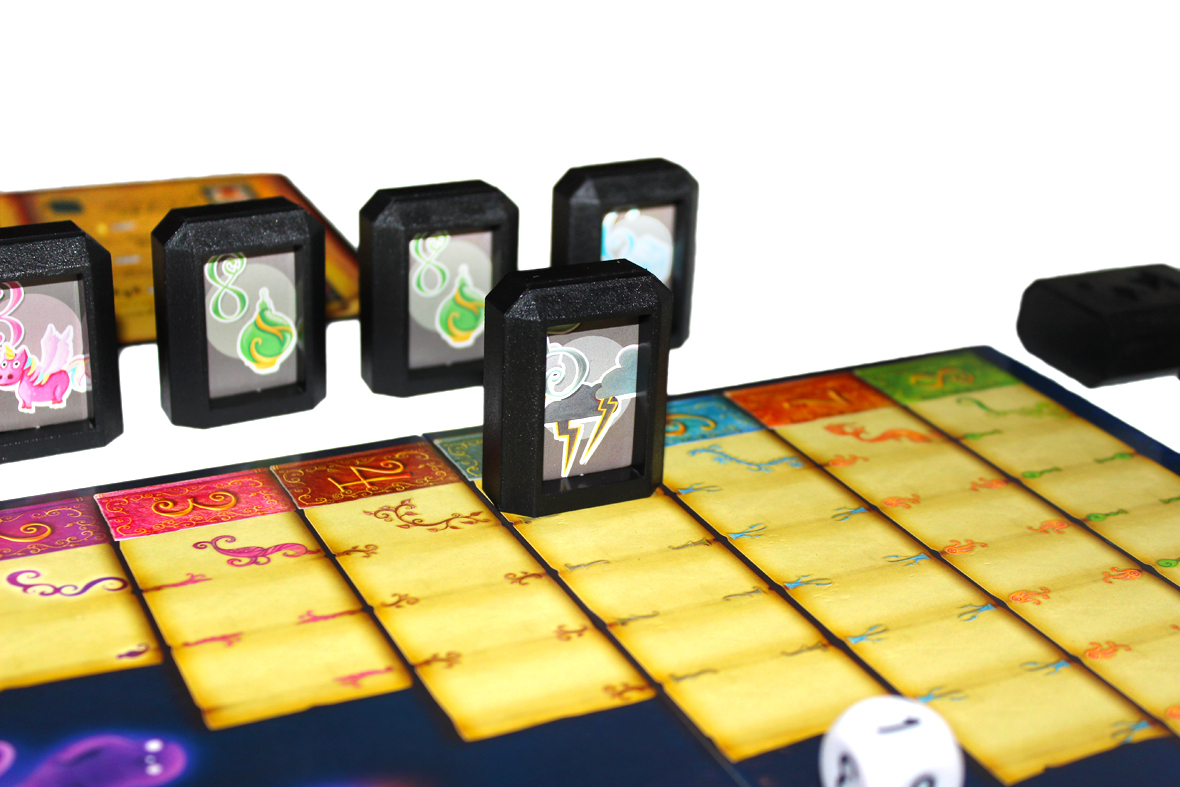 Let’s talk about the spells: 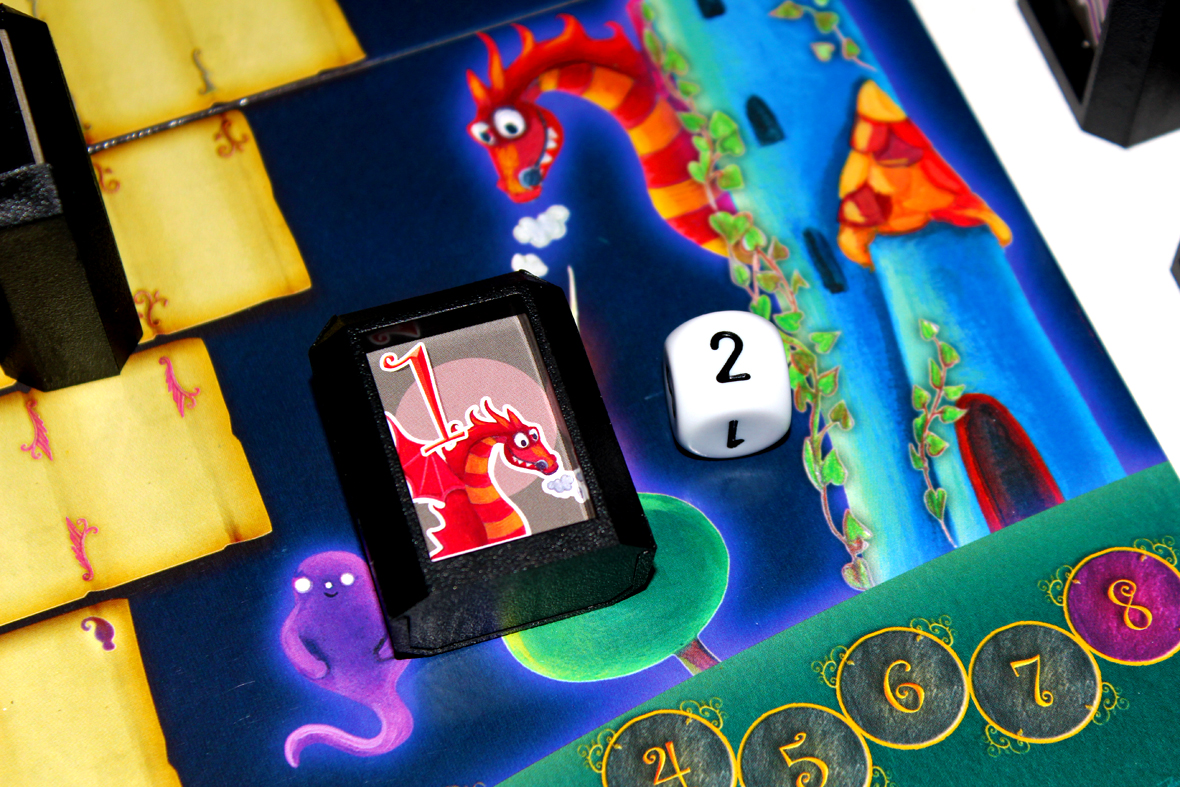 End of the Turn 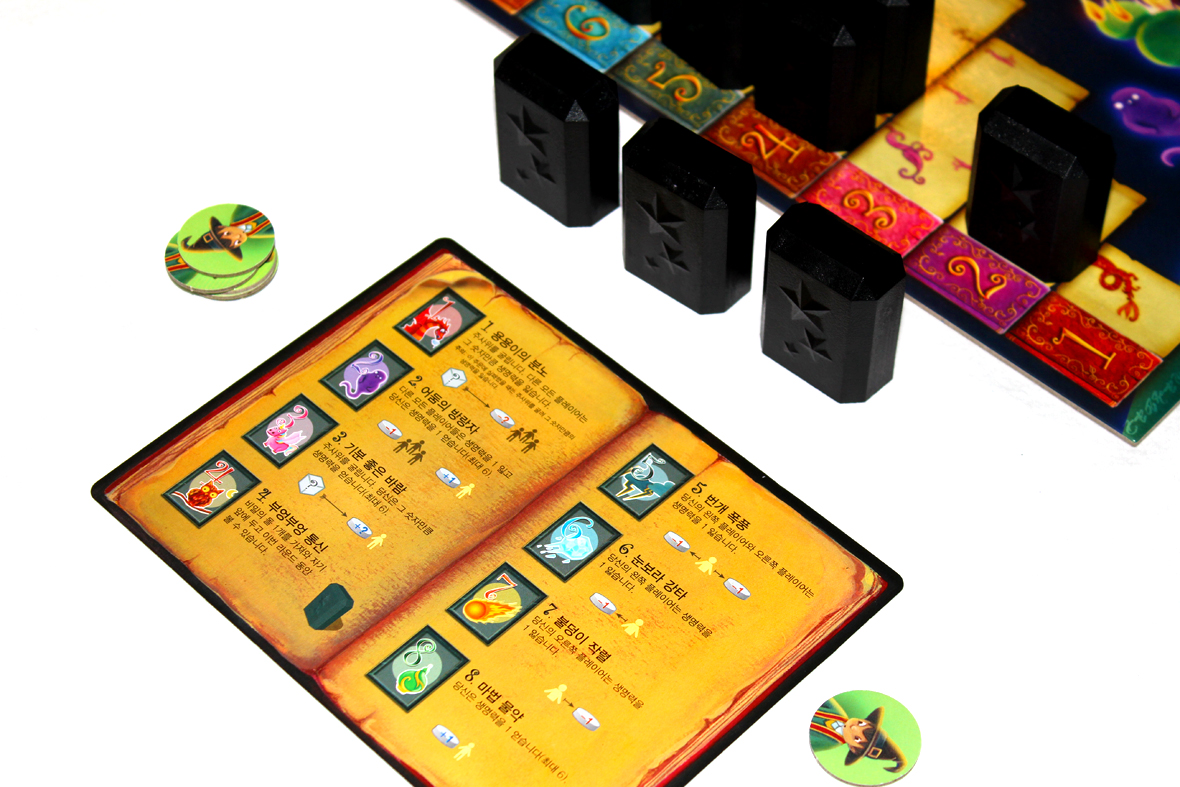 If you’ve successfully cast one spell, you can end your turn! Or you can keep going until you bust. That said, if you successfully use all the Spellstones you have, you immediately win the round! Reduce your opponents’ health to 0. Otherwise, refill your hand to 5 Spellstones if possible and the next player takes their turn.

End of a Round 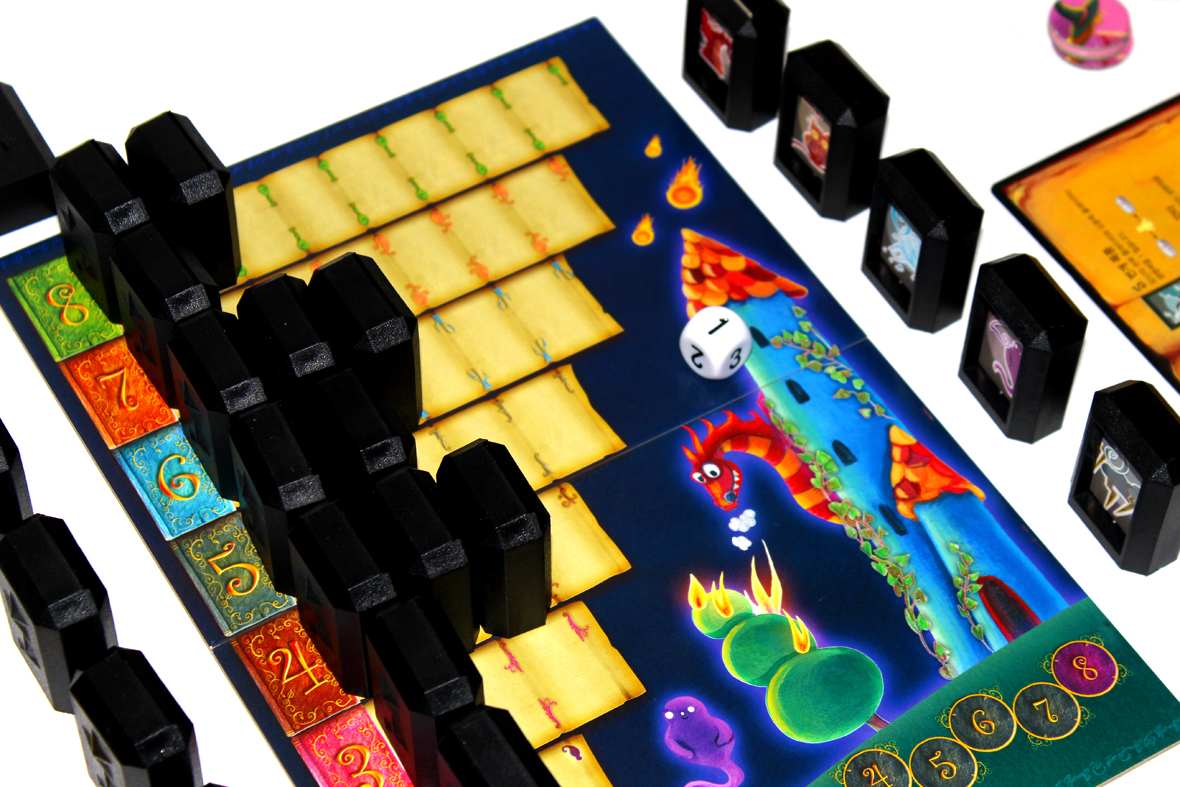 If a player won a round, they move up 3 spaces on the score track. If they didn’t lose (they didn’t win, but they have more than 0 Health), they may move up 1 space. If you lost (you have 0 Health), you move up 0 health. It is possible to knock yourself out, in which case all other players survive and move up 1 space. Don’t forget to give yourself extra points if you have any secret Spellstones via the Night Singer spell!

End of the Game 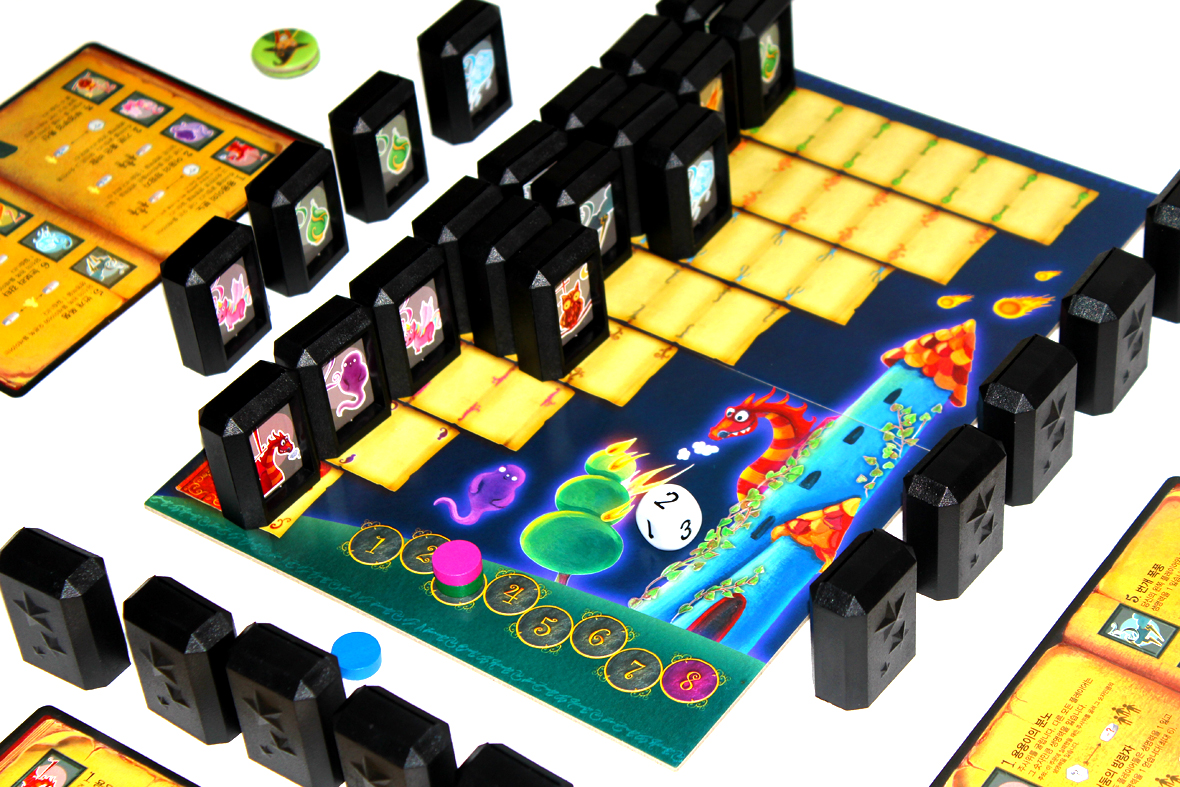 If a player reaches the top floor of the tower, they win!

Weirdly, I think I like this game most at two, since there’s not a ton of information. At two players, you can only see 17 Spellstones. At 3, it’s 16. 4 is 15, and 5 is 20. For some reason 17 feels like the right number. It may be that it’s easier to manage the game when only one other person is attacking you? Who knows. I think that there may be something to that, since not only do you have to manage getting attacked, but you may not even be able to attack them back at higher player counts, since the directionality of strikes depends on what Spellstones you’re assigned randomly. That’s not to say it’s not fun at higher player counts; I think I just generally vastly prefer it at two players. That said, it’s a bit disappointing for the stronger attacks that more players don’t get taken out at two players. I’d say my general recommendation is two players, but I’m happy to play it at any player count. 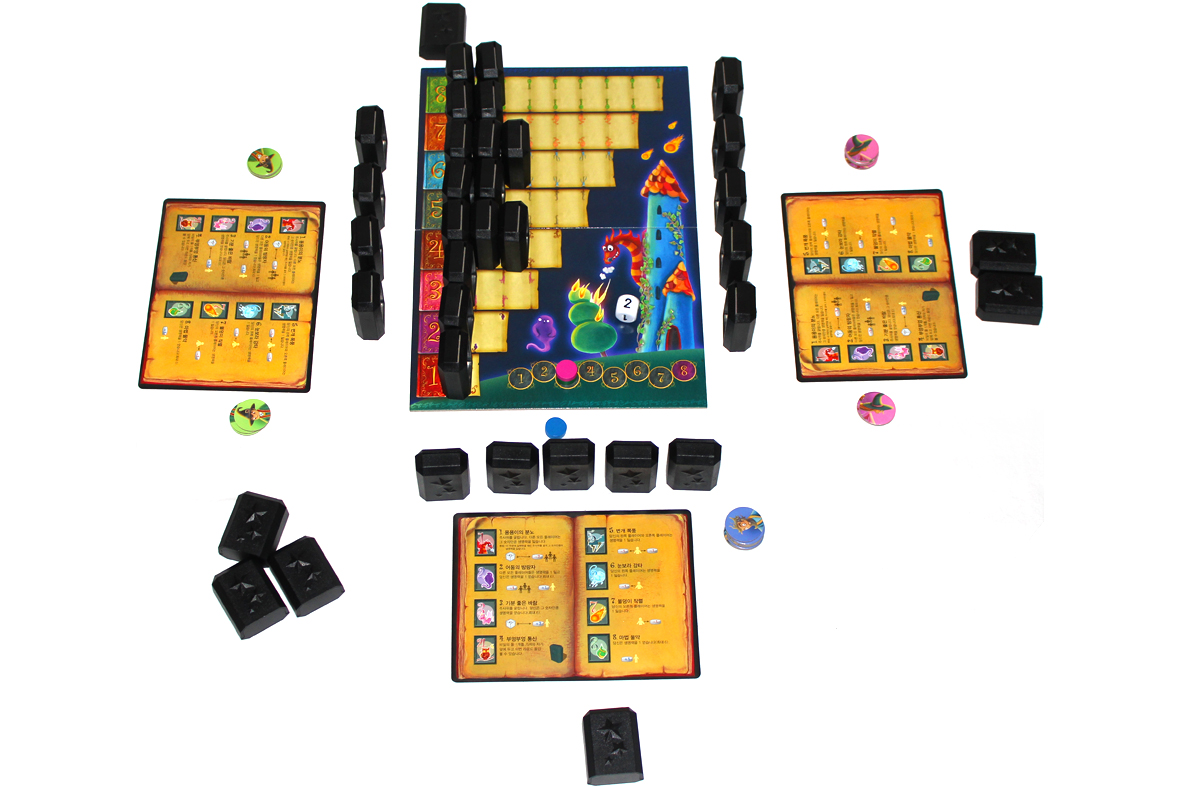 Overall, while I’m sick of typing Abracada… What?, I think the game is awesome! I mean, it’s not the newest game in the world, but I hadn’t heard of it before it arrived and I’ve been having a blast playing it. I think, similar to other deduction games, I like the idea of having to use some probability, some information, and some luck to figure things out (The Shipwreck Arcana remains one of my favorite games, and I’m sure I’d love Cryptid if I had ever gotten a chance to play it). The thing I appreciate about this one is that it really encapsulates that deduction tension inside of a whimsical game of spellcasting and mostly having those spells blow up in your face. It’s also likely a great game for families, since even if you’re playing randomly or don’t want to bother with deduction, you can still have a good time, which is nice. I could see an updated second edition with cards instead of Spellstones likely being a good move, though, in terms of making the game easier to set up and cheaper. I just wish there were something that could be done about incentivizing players to blow themselves up. Alas. Well, if you’re looking for a fun and quick deduction and press-your-luck game, or if you’re just looking to be a silly wizard who can’t cast spells great, I’d definitely recommend checking out Abracada… What? I’ve really enjoyed it.