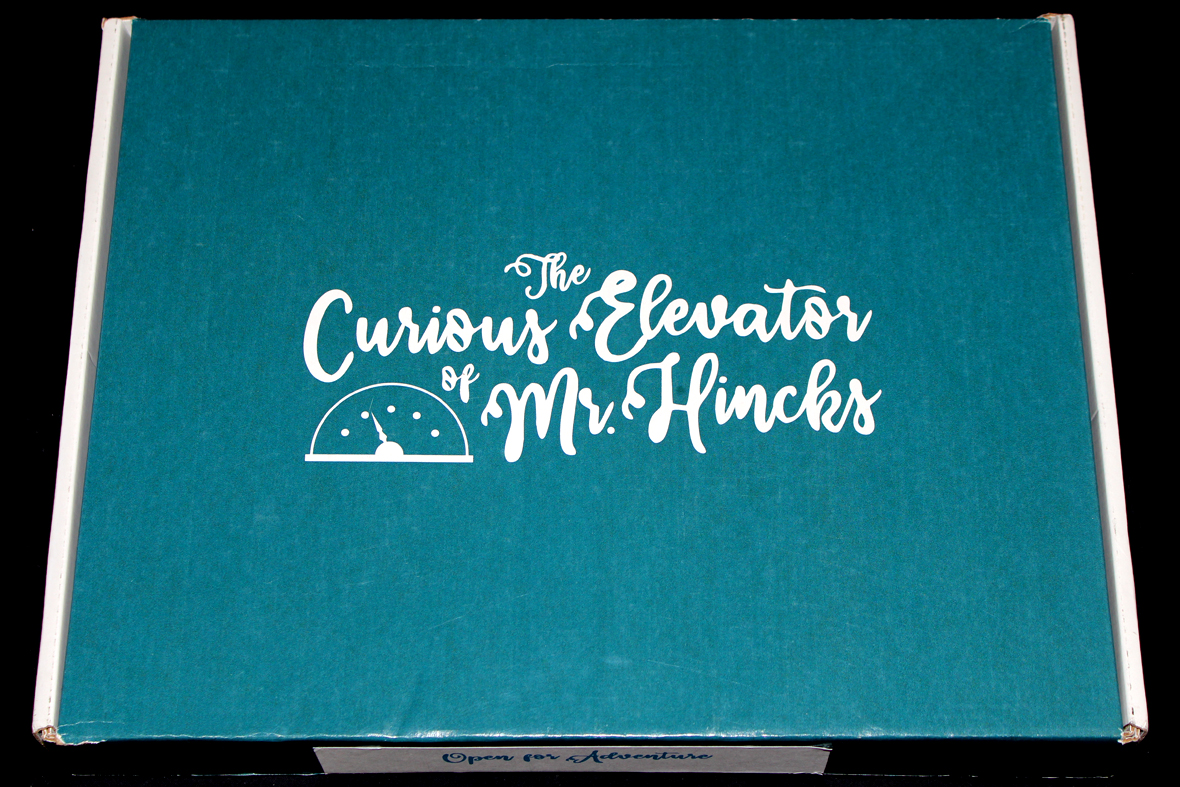 Full disclosure: A review copy of The Curious Elevator of Mr. Hincks was provided by Bluefish Games.

Back with more escape room games! This is a particularly good set of games to go through, since, I’ve been testing which games work online and trying to find good titles to play with my friends. Thankfully, online escape room games have been a good fix for that particular problem, since often we can take photos of the components and share them around so that my friends can work on them even without being in the same room. This particular one, The Curious Elevator of Mr. Hincks, also has a mild online component, which will hopefully improve our standing even more. Let’s dig in and see what’s going on with it.

Famed inventor Stephen P. Hincks has sent you a mysterious package, inviting you to participate in his new puzzley maze. Using the “Internet”, players will compete to reach the end by solving puzzles to gain passwords that will move the elevator to a different floor, like most elevators but a bit more obnoxious. Should you solve them all, you’ll earn his favor and a name for yourselves as puzzle aficionados, which is pretty much all anyone could possibly ask for. Do you have what it takes to beat this famous puzzlemaster at his own game?

Setup’s not too bad. You basically just need the box contents:

This isn’t all of it.

It may help to have a pen or something to take notes with, unless you want to doodle in the margins of the box content. Either way, once you’re ready, navigate to the webpage and get started!

The Curious Elevator of Mr. Hincks plays pretty similarly to a lot of escape room-style games currently on the market. Essentially, the game begins at the lobby; you’ll use the site to go up to a new floor, and the floor numbers are essentially random (as elevator-owners tend to be kind of whimsical).

On each floor, you have a puzzle that your group is presented with. Solve the puzzle, and you’ll get a password that will help your group move to the next level on the elevator. The puzzles vary in scope and complexity, from tactile puzzles to logic puzzles to math puzzles to word puzzles to decoding puzzles and everything in between. Work with your friends to solve them so that you can generate that password.

As you progress through the game, you’ll eventually arrive at the final floor. Solve the puzzle there, and you’ll be able to reach the top floor and see Mr. Hincks, himself!

Not a ton, since I played this one online. I handled all the tactile components myself and took relevant pictures for them, so that was fun (so that my friends could see it). I think, personally, I’d probably cap this one at four. While the puzzles aren’t technically modular (since you have to do one before you can do the next one), they’re generally splittable within the puzzle itself, so that players can work independently to solve multiple components, which is always a good look for a puzzle game. This means if you’re playing solo, you can solve them all yourself and that’s fine, but if you’re not playing solo, then you can divide and conquer to arrive at the floor’s next password. I think more than four, though, and you’re going to run into too many cooks in the kitchen and it’ll be hard to effectively divide up the puzzles. That’s my take, at least. Anything four or fewer, though, probably fine! I just personally don’t like doing these games with only one player because I’d rather have my friends around to help me solve it, even if it’s just over video call.

As with the other escape room games I’ve done, this is going to be a fairly light / broad section, given that I don’t want to spoil anything for y’all.

Overall, I thought The Curious Elevator of Mr. Hincks was a great time! I definitely will admit that I would have enjoyed it more if I were in person with my friends, but, honestly, most of these games I’ve been playing would be more fun for me if I were able to see my friends. “I miss my friends” is a true, relatable, but not explicitly super relevant statement, alas. Barring that, though, I think this particular escape room game has a lot of good things going for it. It’s got a great hint system, which I think is really going to be critical for a lot of escape room games moving forward. If you’ve got a really robust hint system, the game can be as hard as you want it to be (The Emerald Flame, for instance, has amazing hints, but is really tough). And that’s awesome! Plus, this one has the nice benefit of being extremely family-friendly, which is always good for a quick puzzley game. I don’t know any kids, so, I can’t really say if they’d really gel with the theme or the puzzles, but that’s why other content creators with different perspectives to mine are valuable. It’s a great tactile puzzler, though, even if that makes it harder to play remotely, but I do wish the box they sent it in contained a more upbeat and colorful box so I could photograph it. Currently, it doesn’t look like much beyond a shipping box, which is not that exciting to me. Either way, though, I think it’s a great (and surprisingly substantial; took us over two hours) escape room title, so if you’re looking for a great way to puzzle the day away, I’d recommend checking out The Curious Elevator of Mr. Hincks! I had a lot of fun.