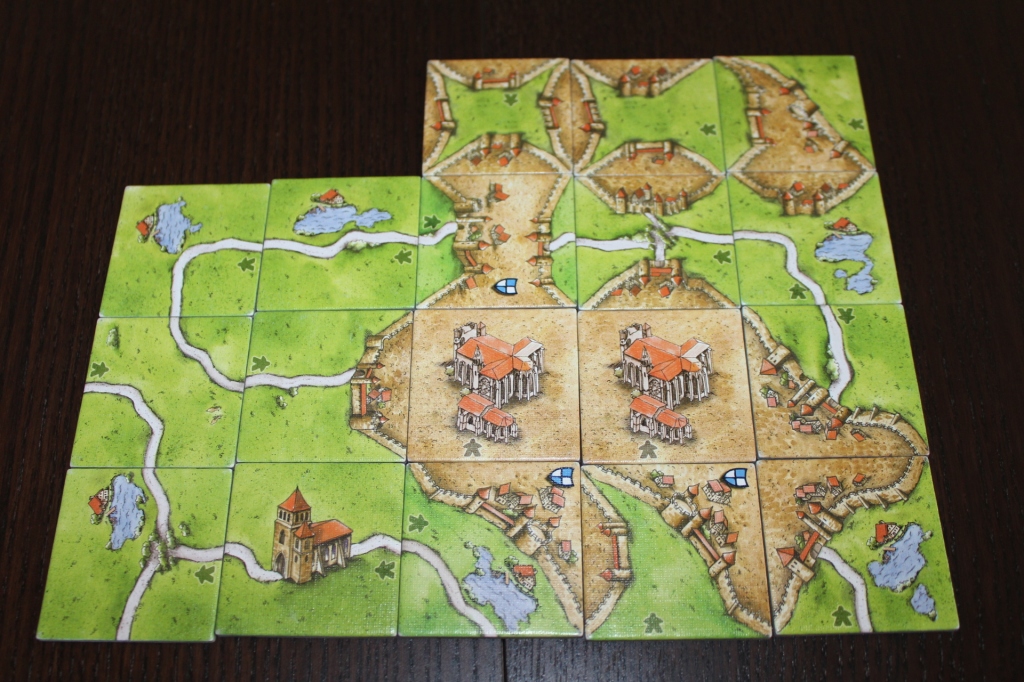 So, I’ve never actually reviewed just an expansion before. Sometimes I’d review the expansion along with the base game, but I want to spend a bit of time talking about this one, especially since Z-Man has decided to completely redesign the base game (and these expansions). Now, I could go on and on with my opinions on the redesign (and, indeed, already have), but I’d rather focus on the game.

Carcassonne: Inns and Cathedrals is the first of … ten? Yes, ten large expansions for the base game, each drastically overhauling the rules in their own special way. I’ll highlight what’s different, and then we’ll launch into our usual Setup/Gameplay/Discussion.

So, Inns and Cathedrals (I&C, henceforth) adds 18 new tiles to the game, each politely branded with a large meeple emblem so that you can un-add them if you so choose (why you would is an entirely different but still useful question, unless the answer is storage). Let’s talk about each of them in turn. Also, in order for this to make sense, you might want to read the Carcassonne Setup and Gameplay in my previous blog post if you’re not already familiar with the base game.

So, as you might notice, the I of I&C stands for Inns. There are 6 total inns that you may draw during your turn, each with their own road. Inns are pretty special, as they drastically alter the rules for a road they’re on. The rules for a road with an inn are now:

Note that this only applies to roads with inns on them. So instead of scoring one point per road, the Inn lets you gamble a bit and say “either +1 point per tile, or nothing at all.” This is pretty great, but be careful. Note that additional inns on the same road do not further increase its value. Also, just as a helpful note: 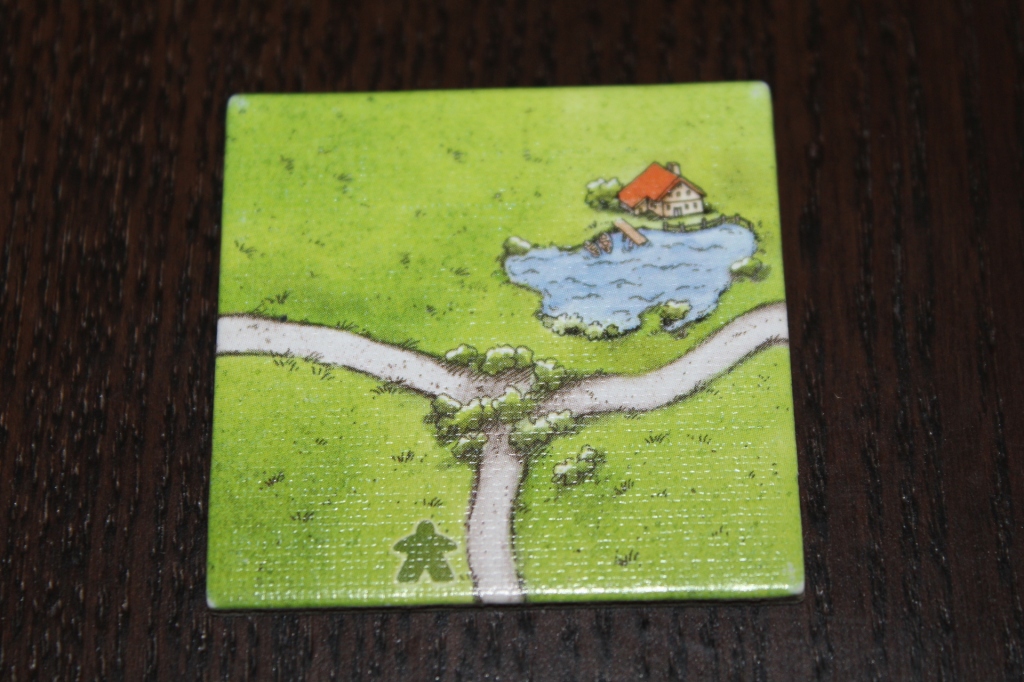 This particular tile only has an inn on the rightmost road segment. The other road segments do not receive the bonus or the negative effect. 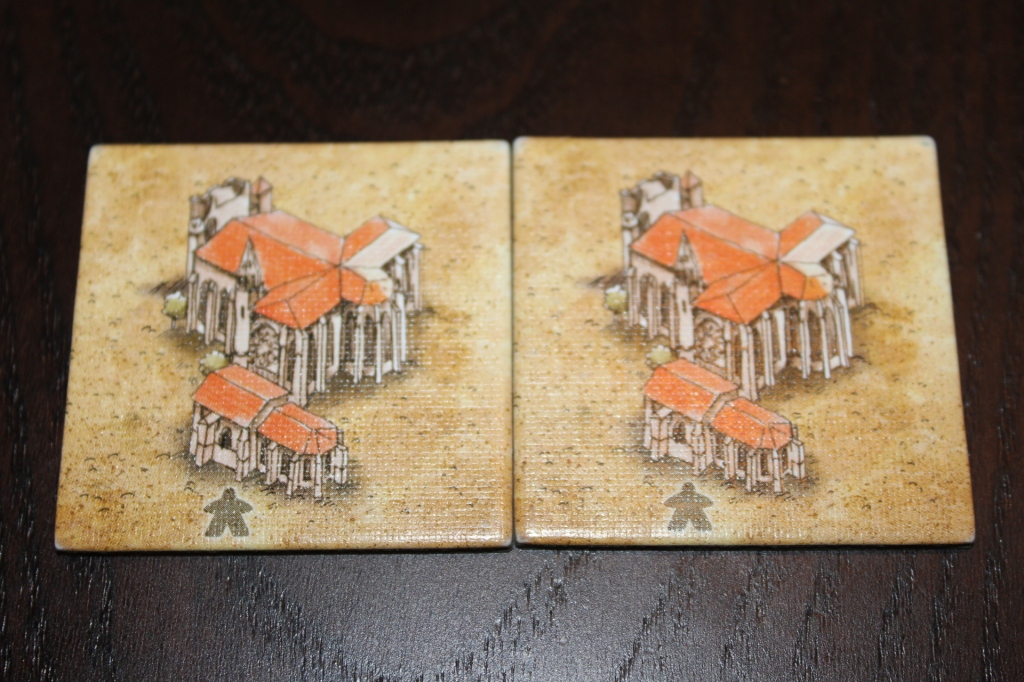 The C in I&C appears as two cathedral tiles. These four-way city tiles, like inns for roads, modify the rules for cities somewhat:

So while it’s not quite double or nothing (which would be obscene), it manages to make cities more valuable while forcing you to build even larger ones. The smallest city you could build with a cathedral is still worth 15 points (one cathedral + four city end tiles). Note that it is possible that a cathedral tile cannot be played in the current board when it’s drawn (you may not have the correct space for it). If so, discard it from the game. Sad! Also, like inns, additional cathedrals in a city do not increase its value. Though having both cathedrals in one city is literally preposterous, anyways.

One of these meeples is not quite like the others. In fact, it’s nontrivially larger (just barely, though — it’s still easy to confuse the two). The Big Meeple is a new meeple added for I&C, and it gives you a total of eight playable meeples during gameplay (since you lose one meeple by default for the scoreboard). Like a normal meeple, it can be played as a thief on roads, a knight on cities, a farmer on fields, or a monk on monasteries. However, it is worth two meeples when it comes to determining control of a feature. So if you’ve got your Big Meeple and your opponents have their small meeples in a field, that’s your field. The Big Meeple doesn’t know how to share, only how to take.

So, as I mentioned, this expansion adds: 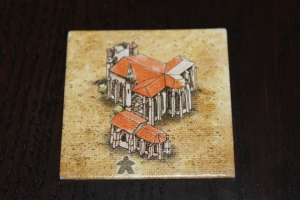 but that’s only 8 of the 18 tiles and an extra meeple. What else is in there?

Well, it wouldn’t be an expansion without some weird tiles:

Yes, that’s a double-turn and three- and four-way city-ending tiles. The two city-ending tiles with a road ending between them is particularly egregious, but the roads going into the cities are not scoreable. Because they’re basically not there. These tiles are a bit obnoxious, but they have their uses. Especially the top two.

There are also a few more normal tiles: 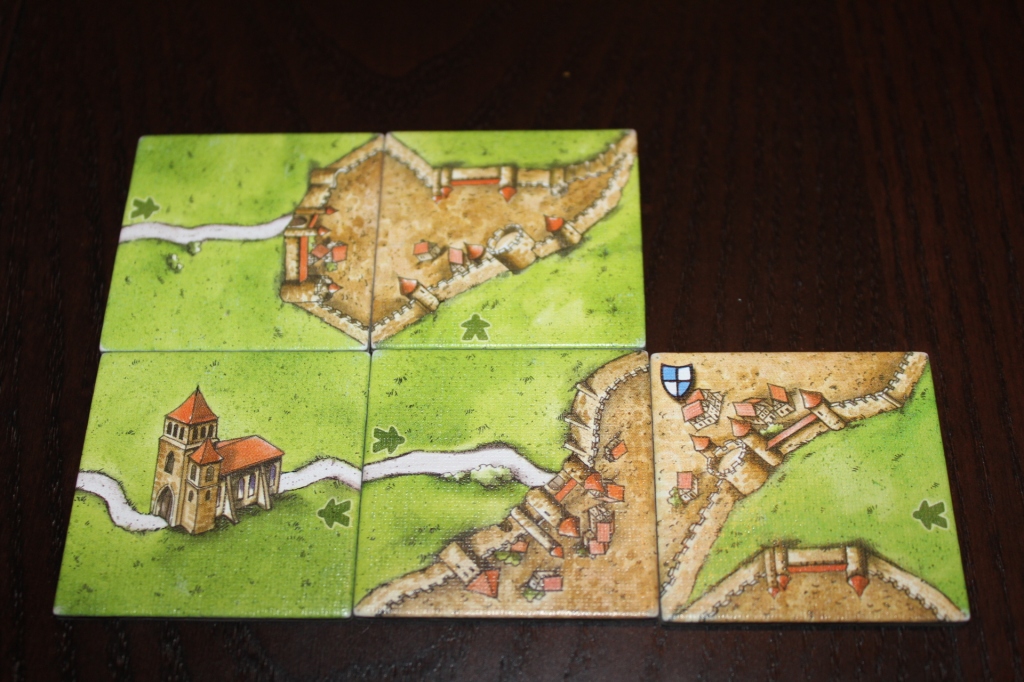 The only real things worth noting here are that the bottom-right tile is two separate city tiles, the bottom-left tile is a monastery that ends both of those road segments, and the top-middle tile is a city-ending tile that splits the tile into two separate fields. Still a bit weird, but much less so than the other 5.

And that’s everything new! Let’s resume our previously scheduled discussion and review.

Same rules as base Carcassonne apply here, too. The key things that are different and new are:

However, the major change here is in strategy.

While the same strategies from base Carcassonne mostly apply here, too, there are a number of new things to keep in mind specifically from I&C.

That’s about all there is to it. 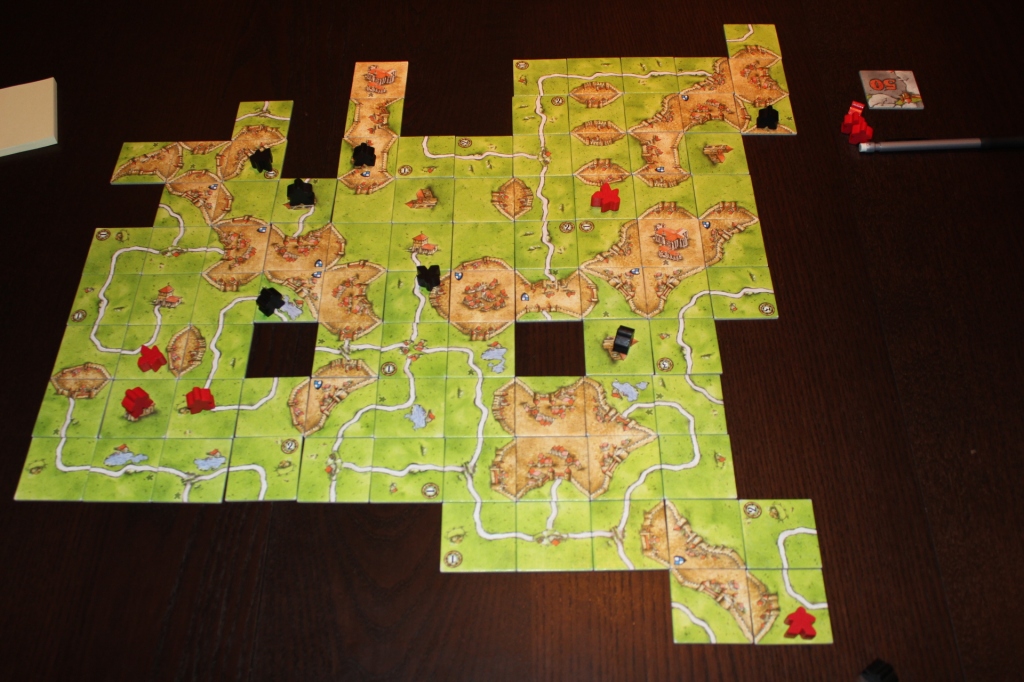 Yeah, I know. It’s weird for me, too, but this is quite possibly a perfect expansion. I have no complaints. In fact, when I’m teaching this game, I usually include I&C because it effectively is part of the base game, as far as I’m concerned. For me, the extra tiles make the game just slightly longer (which, for once, I actually like) and they add additional variety and strategy for a very low overhead. This is one of the best expansions for any game I’ve owned (probably along with Pandemic: On The Brink), and it has the added benefit of improving on a game I already love. While I don’t think it necessarily boosts Carcassonne to a perfect 10, as an expansion, I think it deserves a perfect score because of how well it augments its base game without detracting anything.

I also accidentally took another I&C tiles picture, so, here you go.