But Flip City itself is more about building a tiny town (with tiny people, I imagine, but unconfirmed) by playing and buying cards like Dominion or Paperback. The interesting twist is that cards are double-sided, and can be flipped (hence the name) or recycled (more on that later) to gain various effects. While this does make the deck really difficult to shuffle (see Cons), it also adds an interesting layer to the gameplay. Let’s talk a bit more about that after Setup.

There are only cards in this box (no fancy metal tokens [oh, Dominion] or low-quality cardboard tokens [also Dominion, disappointingly]), so take them out. I’ll go through them in Gameplay to talk a bit more about what each one does, so don’t worry too much about them right now. The major thing you need to do is give each player a starting deck, which is: 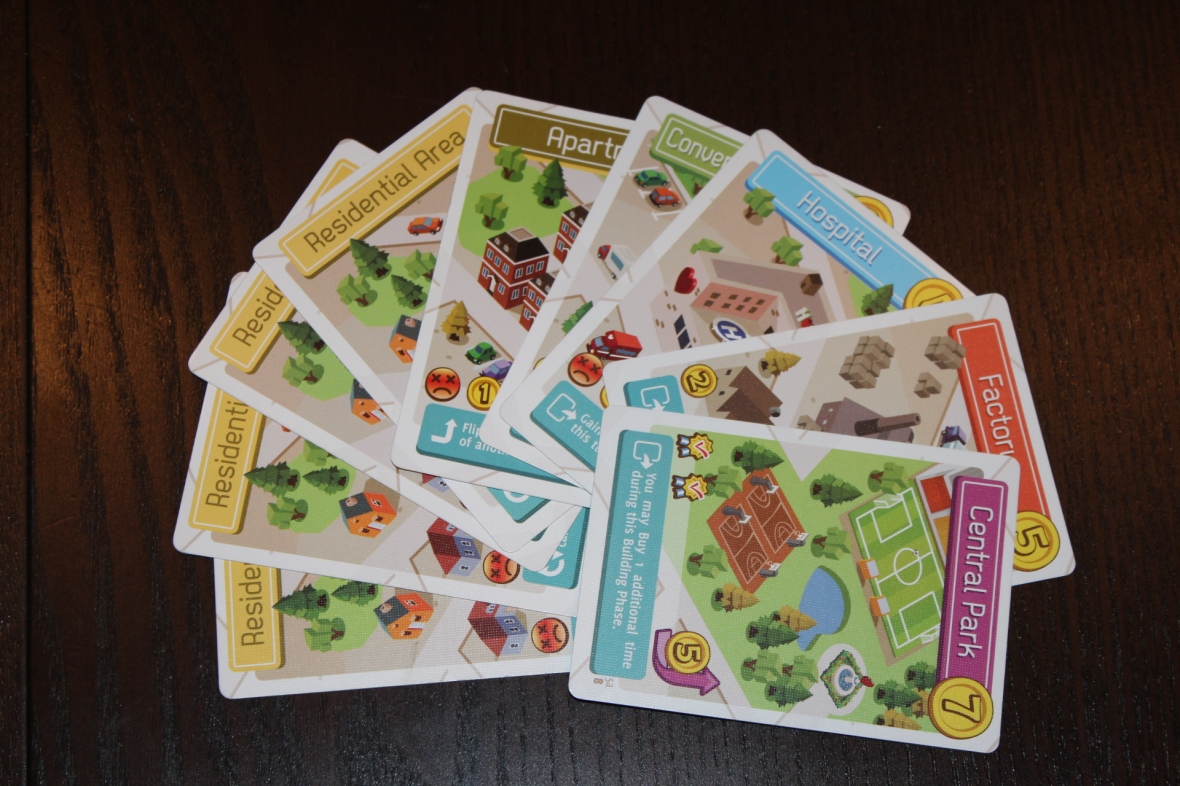 Note that the Office cards are not in the starting deck (they are an expansion), so they can go with the other cards to form the buyable card area, which is:

If you are anything like me, you may want to also display the flipped version of the card below that card’s stack, so that players can read it at their leisure during the game. If you do, just make sure you’re not adding an additional card that will confuse other players. I tend to also leave the Residential Areas / Apartments out for the same reasons (just for reading), but perhaps not the best idea for your first game.

When your play area looks like this, you’re ready to begin: 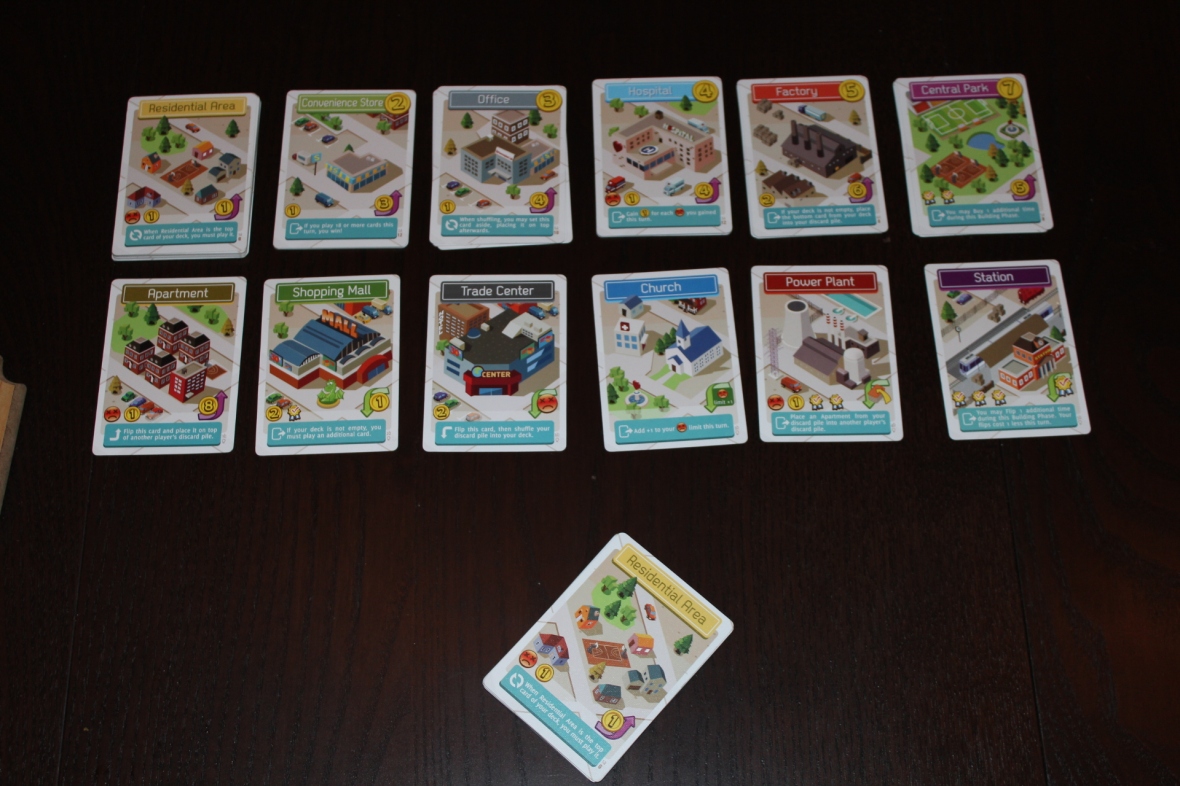 Let’s talk more about the game in Gameplay.

And that’s about it! Play continues until one player wins.

Now that we’ve talked about the game generally, let’s go through each card; I find that usually helps. I’m gonna go with the Primary side and the Flipped side, just noting which is which by the card’s title, for instance, Apartment (Flipped Residential Area). I’m also paraphrasing the effects. 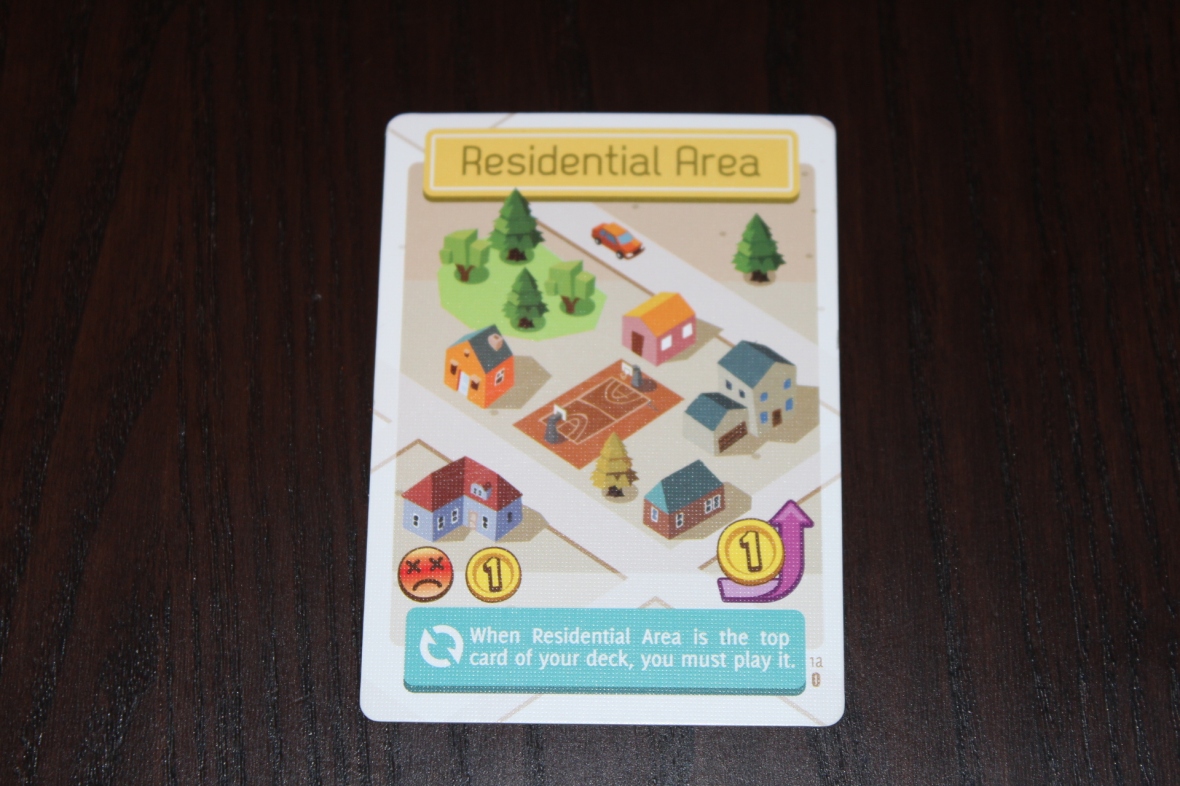 Cost: N/A (cannot be bought)
Flip Cost: 1
Frowny-Faces: 1
Money: 1
Points: 0
Effect: When Residential Area is the top card of your deck, you must play it, unless you’ve already hit your three frowny-face limit and your turn has ended. Then it just waits to be the first card you play next turn.
This is an awful card to have in your deck, and luckily you start with four. This is usually how you end your turn via the frowny-face rule, since you’re forced to play them. 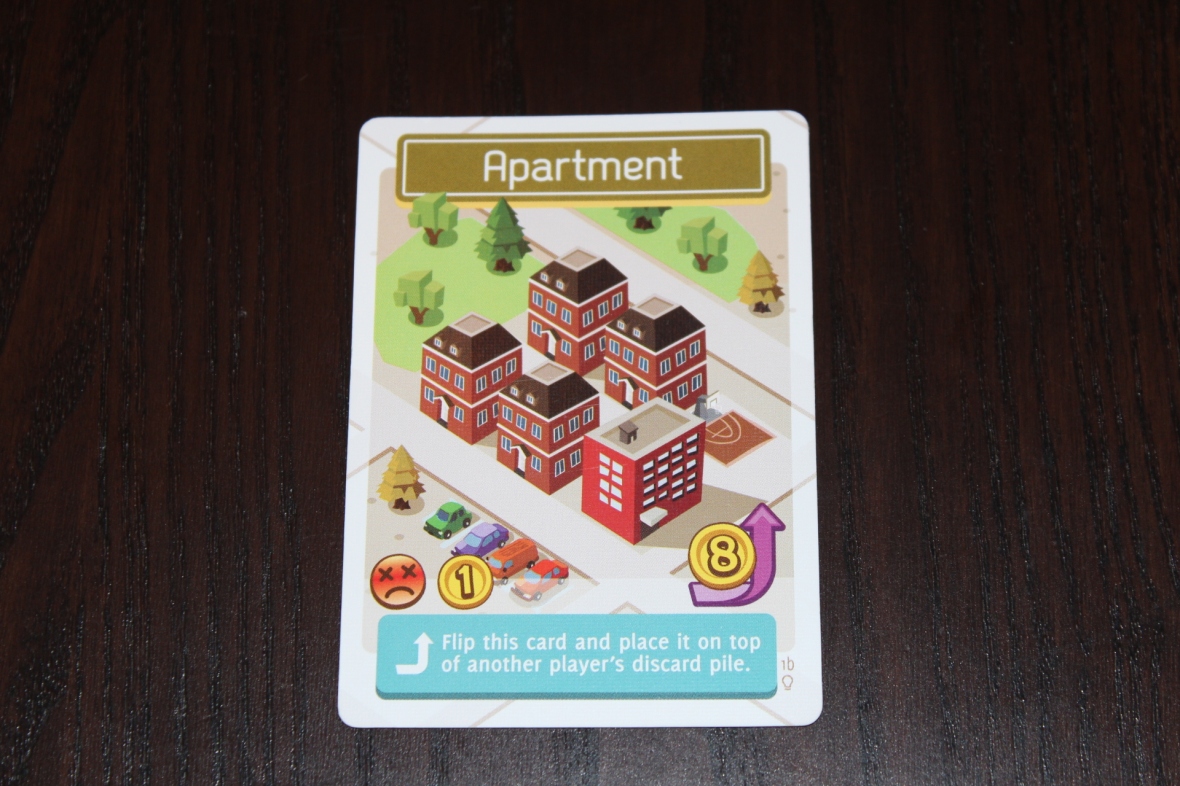 Cost: N/A (cannot be bought)
Flip Cost: 8 (yes, it has a flip cost, not a recycle cost)
Frowny-Faces: 1
Money: 1
Points: 0
Effect: When flipped, place the now-Residential Area in another player’s discard pile, you jerk.
Aggressive move! Expensive, too. This is the only Flipped card that costs money to flip back, for that reason. 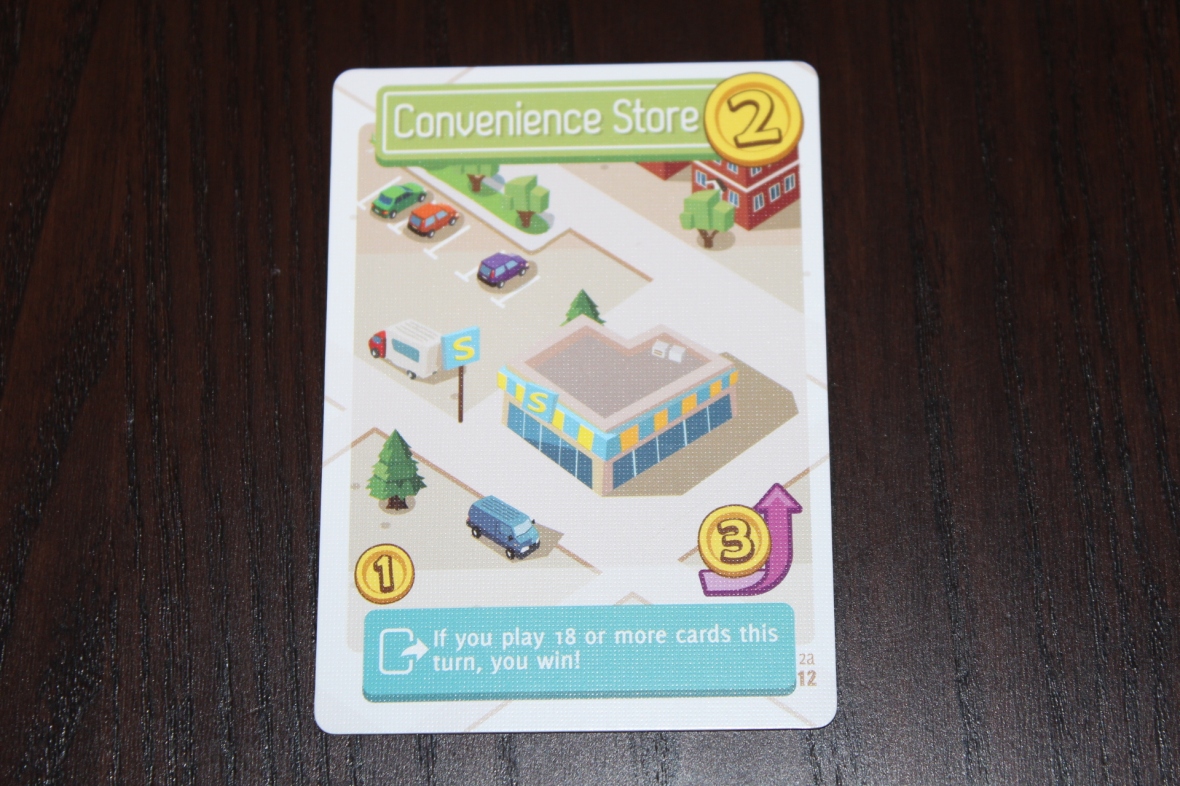 Cost: 2
Flip Cost: 3
Frowny-Faces: 0
Money: 1
Points: 0
Effect: Once you’ve played this card, if you end your turn having played 18 or more cards total, you win!
This is a bit weird because other cards are basically an effect that happens once you play the card, but you do not have to play 18 cards after this one; you just have to successfully end your turn having played 18+ cards without going over your frowny-face limit. 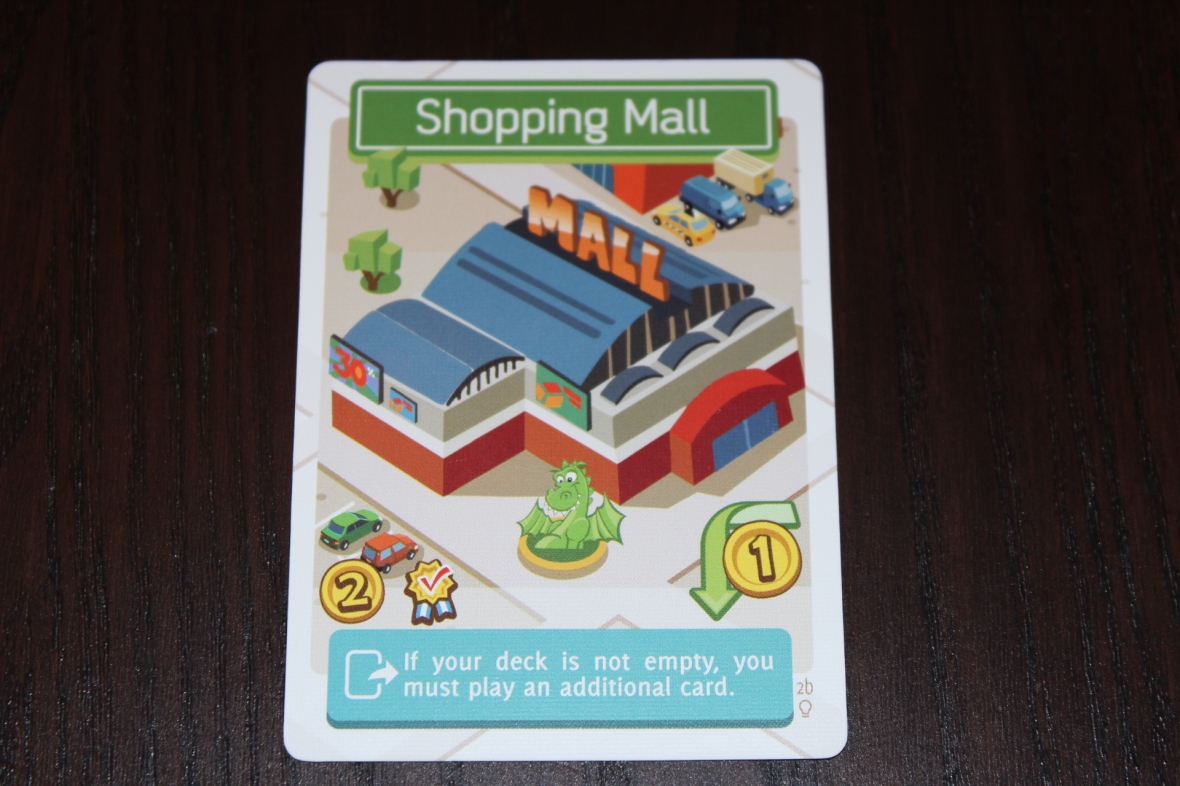 Cost: N/A (cannot be bought)
Recycle Benefit: Gain an extra 1 money when you Recycle this card.
Frowny-Faces: 1
Money: 2
Points: 1
Effect: When you play this card, if your deck isn’t empty you must also play the next card.
This is also a great way to screw up your turn, because you might force yourself to play any card with a frowny face. Be careful.

Cost: 3
Flip Cost: 4
Frowny-Faces: 0
Money: 1
Points: 0
Effect: When you’re recycling your deck, you can take this card out and put it on top of your deck once you finish shuffling.
Great card, just free money on top of your deck. It also means that the top card of your deck will never be a Residential Area again. 10/10. 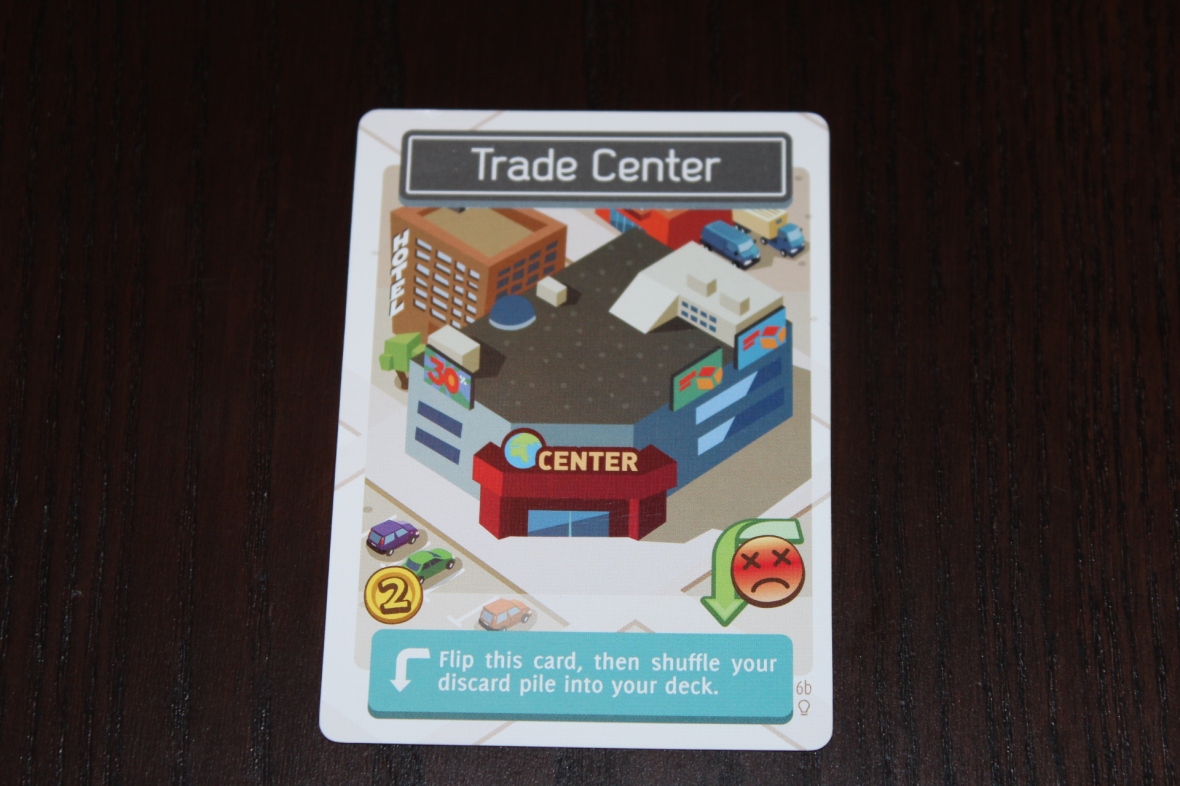 Cost: 4
Flip Cost: 4
Frowny-Faces: 1
Money: 1 + X
Points: 0
Effect: When you play this card, immediately gain X additional money, where X is the number of frowny-faces you’ve already played this turn (including this one).
This means that the Hospital is always worth 2 at minimum, since it has a frowny face. Note that this only applies to already-played cards this turn. Playing more frowny-faces does not mean that previously-played Hospitals are retroactively worth more money. Just that the first Hospital played is worth 2, the next is worth an additional 3, and so on. 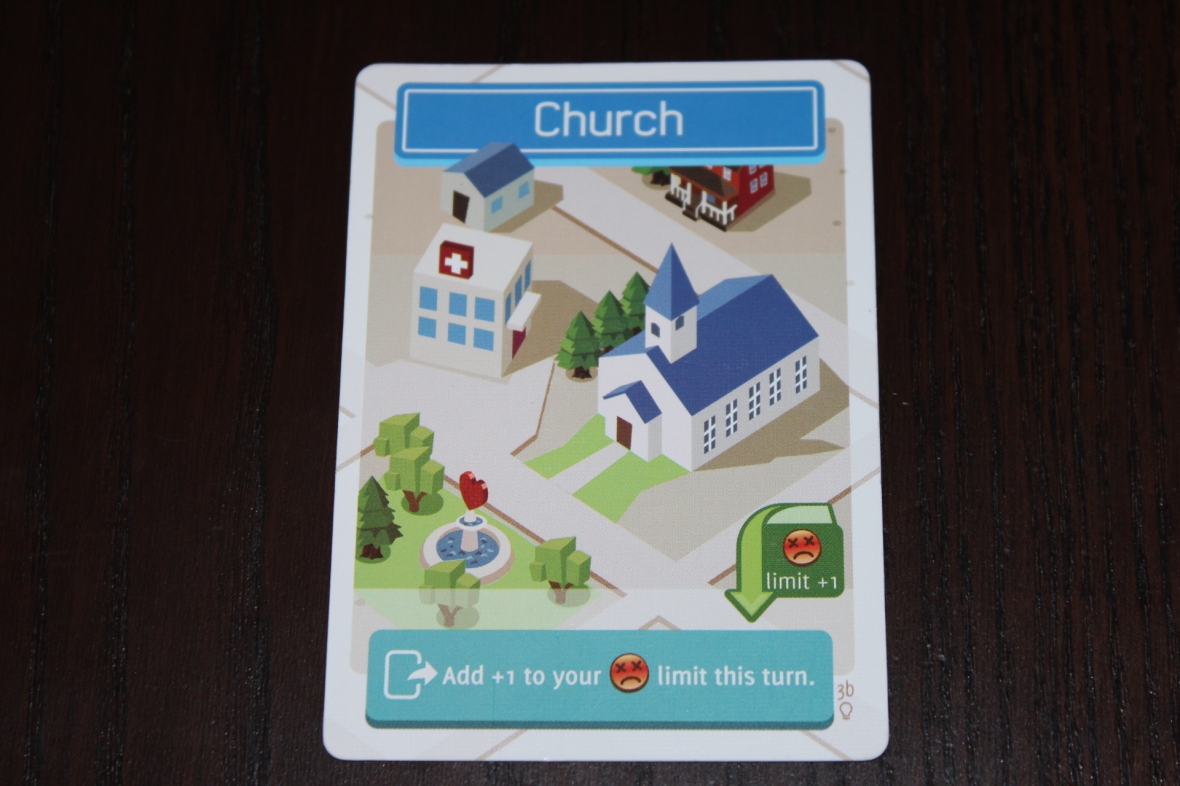 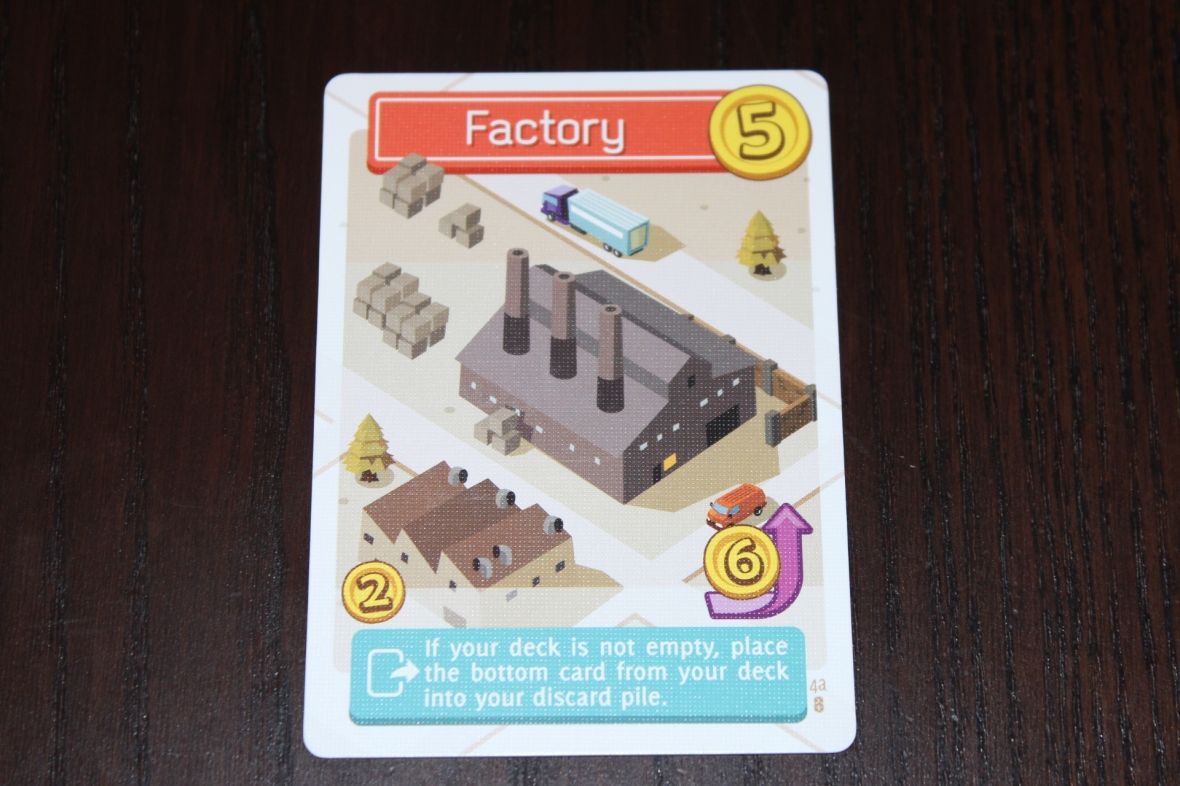 Cost: 5
Flip Cost: 6
Frowny-Faces: 0
Money: 2
Points: 0
Effect: When played, if your deck is not empty, place the bottom card of your deck in the discard pile.
Great card early-game, especially if you’re trying to flip Residential Areas early. Late game it just tends to mess up my turns by forcing me to discard cards that I’d rather be playing. That being said, it’s a great way to make 2 free money.

Cost: N/A (cannot be bought)
Recycle Benefit: When you recycle this card, place it on top of your deck (as a Factory).
Frowny-Faces: 1
Money: 1
Points: 2
Effect: Place an Apartment from your discard pile into another player’s discard pile. Also aggressive!
I’m going to be honest, I’ve never once used this card. The frowny-face + the aggression wasn’t really worth it to me. 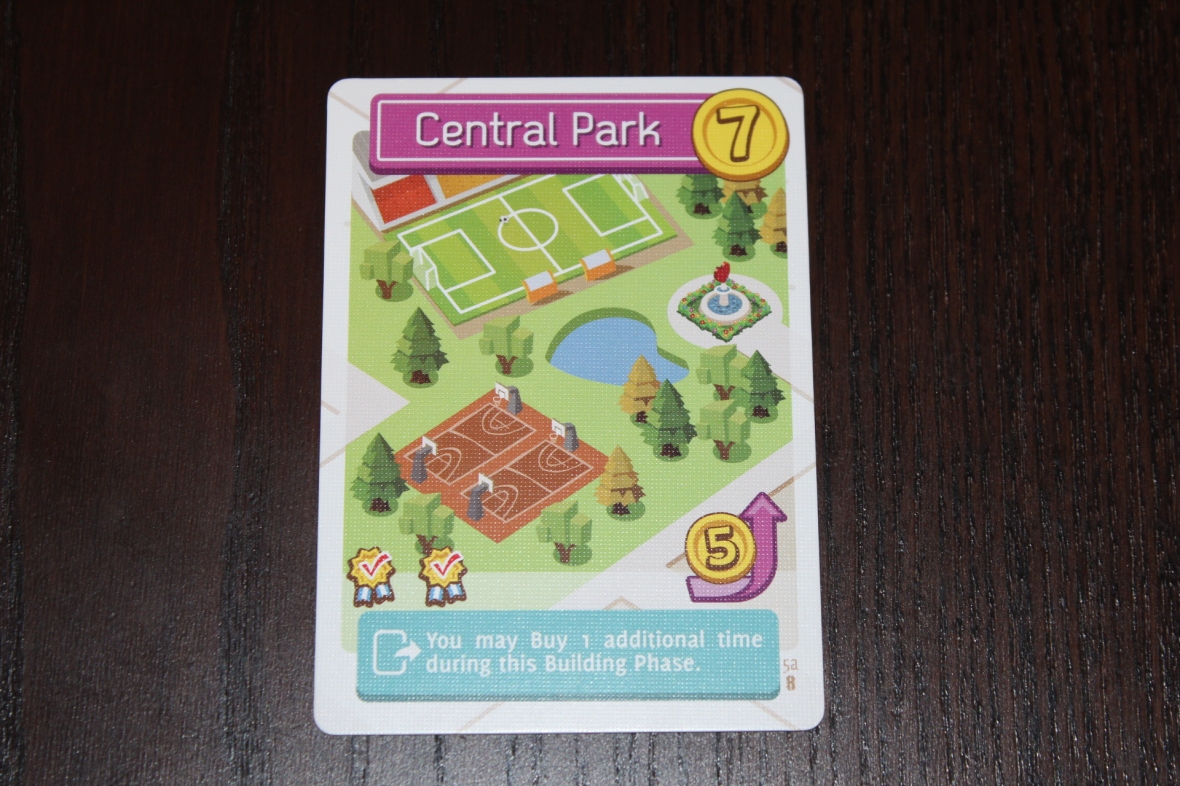 Cost: 7
Flip Cost: 5
Frowny-Faces: 0
Money: 0
Points: 2
Effect: When played, you may Buy one extra time during the Building Phase.
This is a great card. Normally, you can only Buy, Flip, or Develop during the Building Phase, but now you can do any one of those, plus a Buy! (Note that this means you can buy two cards, but you need to be able to afford the combined cost of both.) 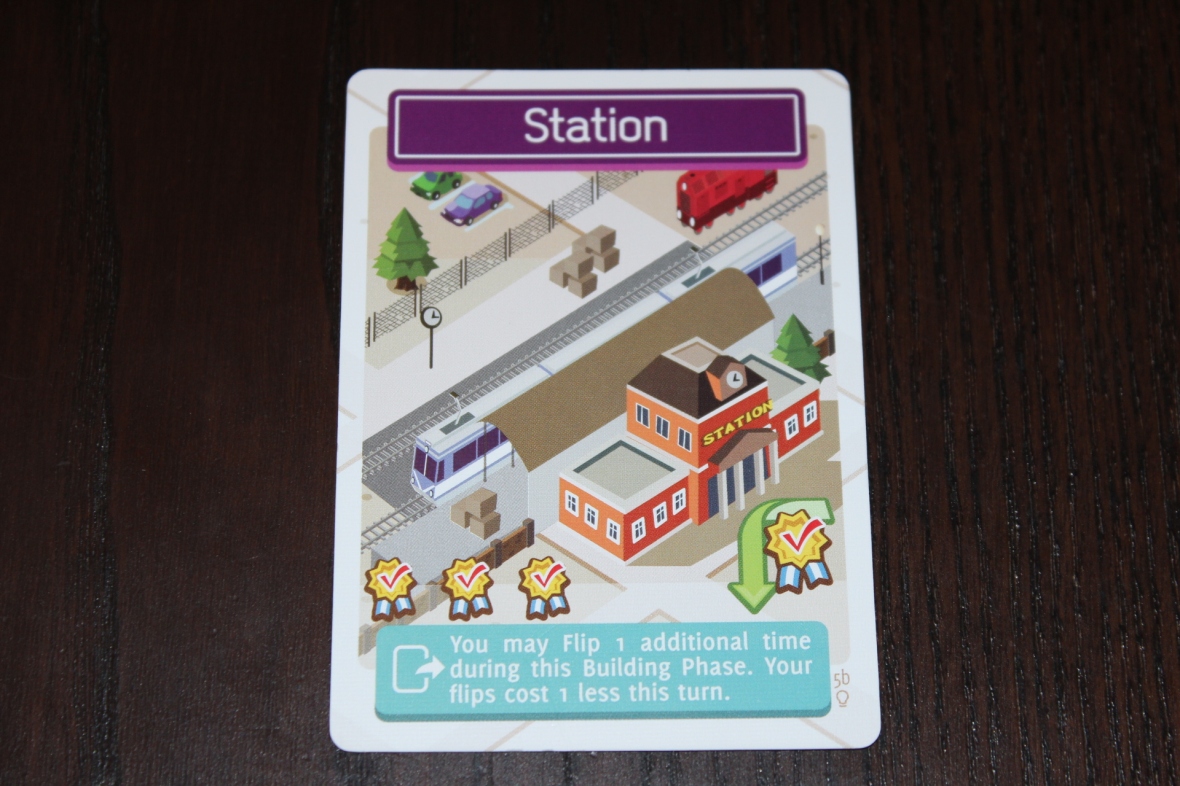 Cost: N/A (cannot be bought)
Recycle Benefit: Gain an extra 1 point this turn when you Recycle this card.
Frowny-Faces: 0
Money: 0
Points: 3
Effect: When played, you may Flip one extra time during the Building Phase, and your flips all cost 1 less money this turn.
This is an awesome card. Like Central Park, it means you can Buy + Flip, Flip + Flip, or Develop + Flip, and every flip is cheaper (and flipping Residential Areas is free!). Usually I just play this and flip two Residential Areas, turn over.

Those are all the cards! And I think that’s pretty much everything.

Well, almost everything. They say that one is the easiest to seat, so a Flip City solo game isn’t a bad idea. Thankfully there are solo rules, which I’ll quickly outline.

You either win when you win or lose when there are no cards left in the supply. See? Easy.

There are two primary victory conditions. Eight points or eighteen cards. I’ll mark a point if it applies to one or the other in particular. 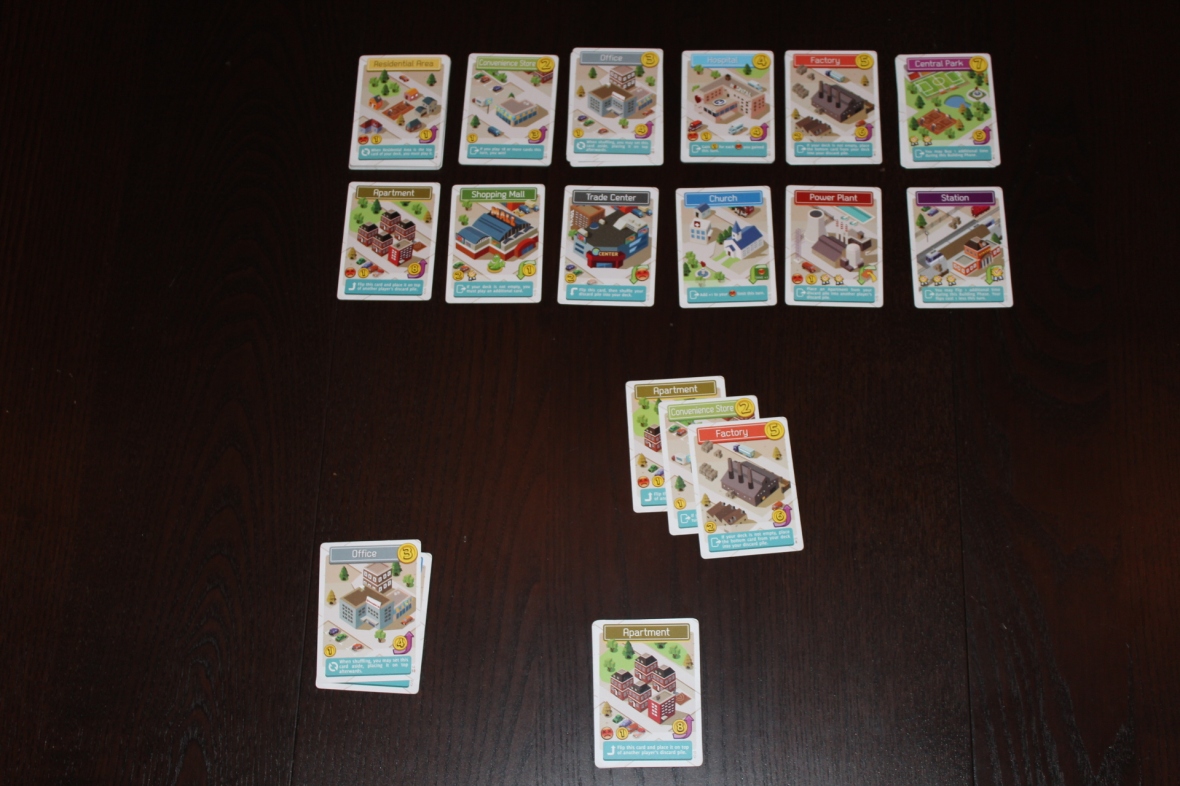 I like Flip City! In fact, I’d even recommend it. Is it the perfect deckbuilder? No, of course not. That being said, I don’t think it’s trying to replace any deckbuilders in your life; rather, it’s a great game for on the go, for a quick break, or for just chatting while flipping some cards over. Honestly, I play it sometimes while my housemates are eating dinner because I don’t really have to focus on it while I play. It’s the Lost Legacy of deckbuilders or something, and I think that’s a great niche to have, as a few other games I’ve mentioned also fit the bill as “Intro to X” games, where X is a type of game (like deckbuilders or drafting). Like I said, if you’re into deckbuilders you should definitely consider checking it out, and I’m really looking forward to how the game changes with the next expansion, Reuse.