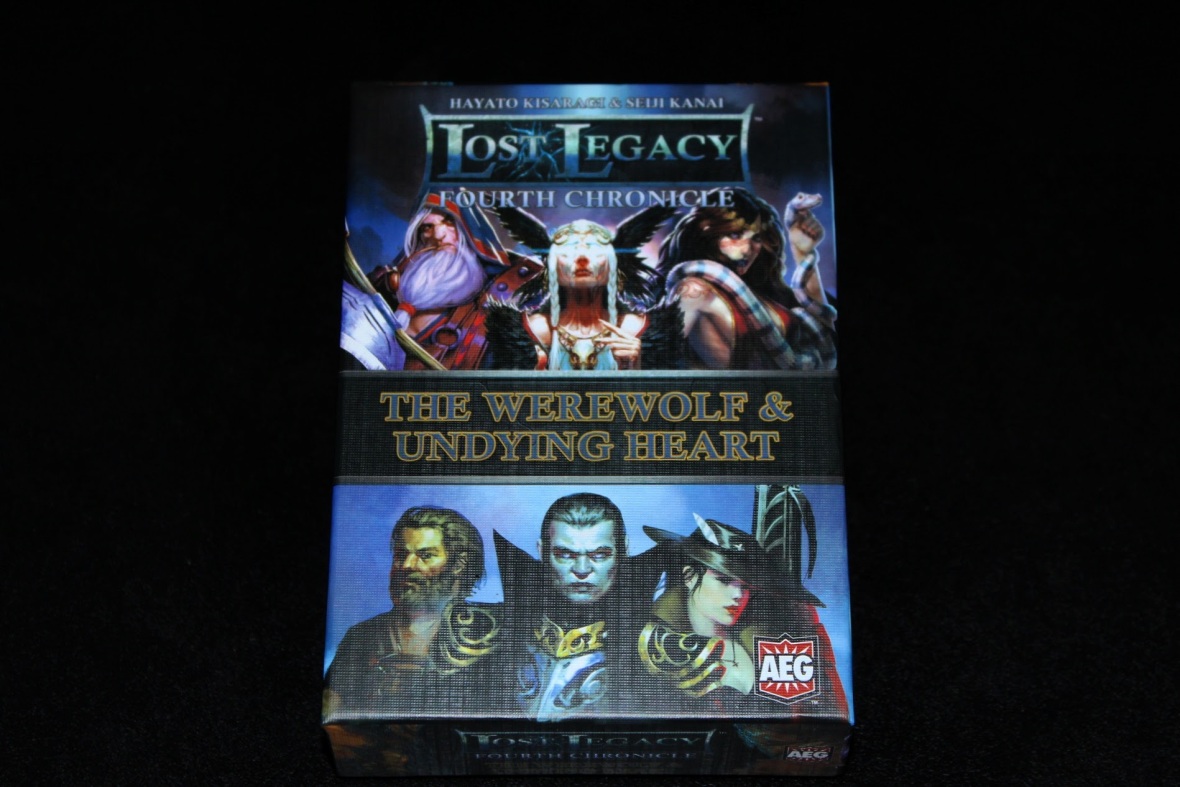 I’ve reviewed 40 games at this point! That’s … actually a lot. What better way to hit number 40 than with an old favorite series — another Lost Legacy Chronicle. Previously in Lost Legacy, we had The Starship, Flying Garden, and the Second Chronicle and the Third Chronicle, all things I generally liked and appreciated. Lets see where this next set will take us. I also got new clear card backs, which is just… very exciting.

Keeping in line with the previous “just FYI King Arthur is in the public domain” that was the Third Chronicle’s Sacred Grail and the “hey Game of Thrones is cool” that was the Third Chronicle’s Staff of Dragons, the Fourth Chronicle brings us The Werewolf (“this Werewolf game people play is pretty cool”) and Undying Heart (“hey has anyone seen those Twilight movies”) decks, which are actually neat in their own way. Keep reading more to find out why.

In case you missed the previous Lost Legacy posts (covering the first two decks and the Second Chronicle and the Third Chronicle in a separate post), I’ll re-go over the rules and general setup, but with different cards.

You should notice that there are TWO decks within the box, each having a different bottom. Look at the top of this post for an example. One set has a literal fancy heart on the bottom — that’s the Undying Heart deck. The other has a werewolf on the bottom — that’s, surprising no one, The Werewolf. Separate these two, since you probably won’t want to mix two sets for your first game.

Each of the cards has a title, a picture, some description, and an investigation speed, which is the number in the top left corner. They look like so:

This picture was voted on! Yay democracy.

So. You’ll need to shuffle the cards, and that’s about it. Just as a quick inventory, each set should have:

You might notice that each card has some dots next to its investigation speed. That’s an easy reminder of how many of that card exist in the set. Just in case you’re trying to calculate some quick probabilities or haven’t memorized it. When you begin, shuffle the 16 cards together and set one card to the side of the deck. This is what’s known as the Ruins, and will be dealt with later. Deal one card to each player. Your setup should now look like this (if you’re playing with two decks):

Now that all the cards are set up, let’s begin.

As I noted the last two times, the gameplay is pretty simple — you draw a card then choose one of the now-two cards in your hand to play (usually). You play it in front of you and then resolve its effect. One of several things could happen:

Once the deck has run out of cards, you switch to what’s called the Investigation Phase. Now, those of you at home who are paying attention but managed to miss my previous explanation on the topic (how?) will note that I already referred to the numbers on your cards as investigation speeds, which might make you think these two are related. You are correct! The lower your investigation speed, the sooner you get to investigate. Now, you might ask yourself, what are you looking for? The answer is simple. One of these! 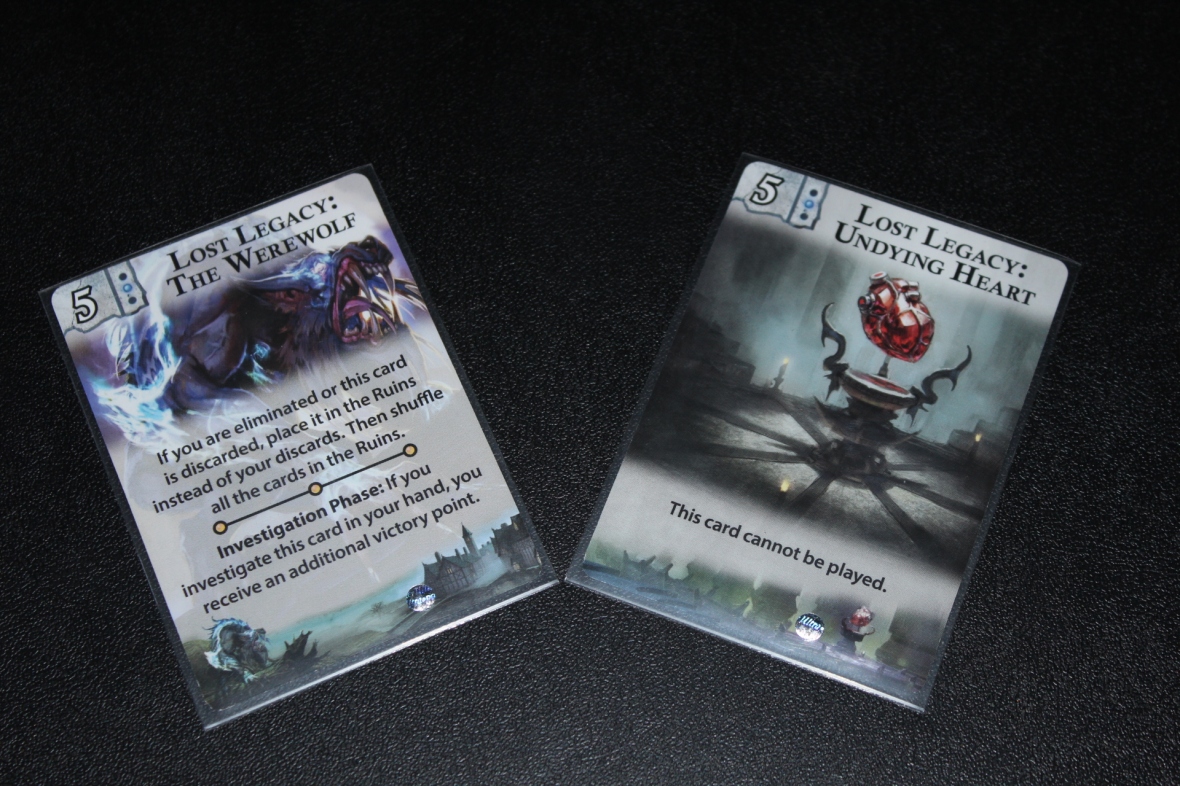 Now, one player calls the numbers in order, from 1 – 8, and each player in turn tries to guess where the Lost Legacy is by revealing any card in the Ruins or in another player’s hand. There are three caveats to this:

However, if you find the Lost Legacy when it’s your turn to investigate, you HAVE won, and you win! Hooray! If you investigate your own hand and you’re holding The Werewolf (TW 5), you get an extra point! (Those are the blue cubes that you can use to keep score between rounds, but I don’t play that way so it’s kind of useless to me.)

Let’s talk strategy in general, and then we can go through each deck and talk about them individually.

A lot of this is rehashed from the previous posts on this.

Meet the Decks: The Werewolf

So, this is The Werewolf. Apparently lore-wise, the Lost Legacy here turned some person into a werewolf and now the town has a werewolf problem. Maybe you can get the werewolf, but it’s highly likely that the werewolf will get you.

Major focuses of this deck are elimination but also turn modification — Premonition can give you an extra turn, Beastmaster can force your opponents to skip their next turn, and the Fortune Teller lets you effectively control another player’s turn, which is interesting. Lastly, the Village Council turns the hand-comparison logic from Vorpal Sword on its head and eliminates the player with the lower card, rather than the higher one. Weird.

As always, a few recommendations: 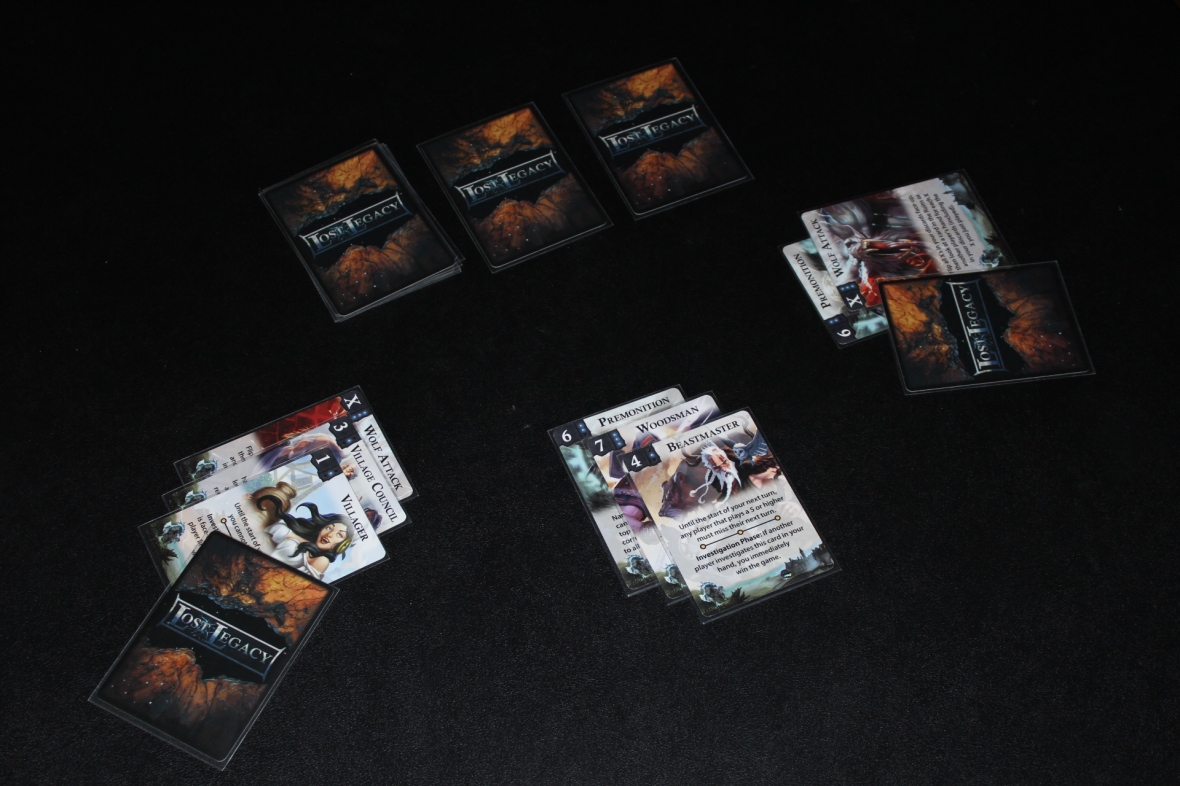 Honestly, as a standalone expansion this game is pretty great! I’d highly recommend it. It’s short, it’s sweet, the theme is fun enough and it plays quickly and well without ever feeling too cheap or obnoxious. Sometimes you get lucky, more often than not you don’t. It starts to struggle a bit when it’s paired up with other expansions, but I don’t think that takes away from how fun it is overall. Like I said, check it out.

Now, let’s talk about the other deck — the Fourth Chronicle’s vampire-themed Undying Heart.

Undying Heart is an interesting bunch, as you might imagine from this picture, here. There’s no real clear theme, as it seems to be a “Greatest Hits” of other sets:

That’s a bit odd to me, but it’s definitely an interesting set for that reason. As a result, it’s a fairly elimination-heavy set with no clear theme other than wrecking other players, similar to Flying Garden and Vorpal Sword. 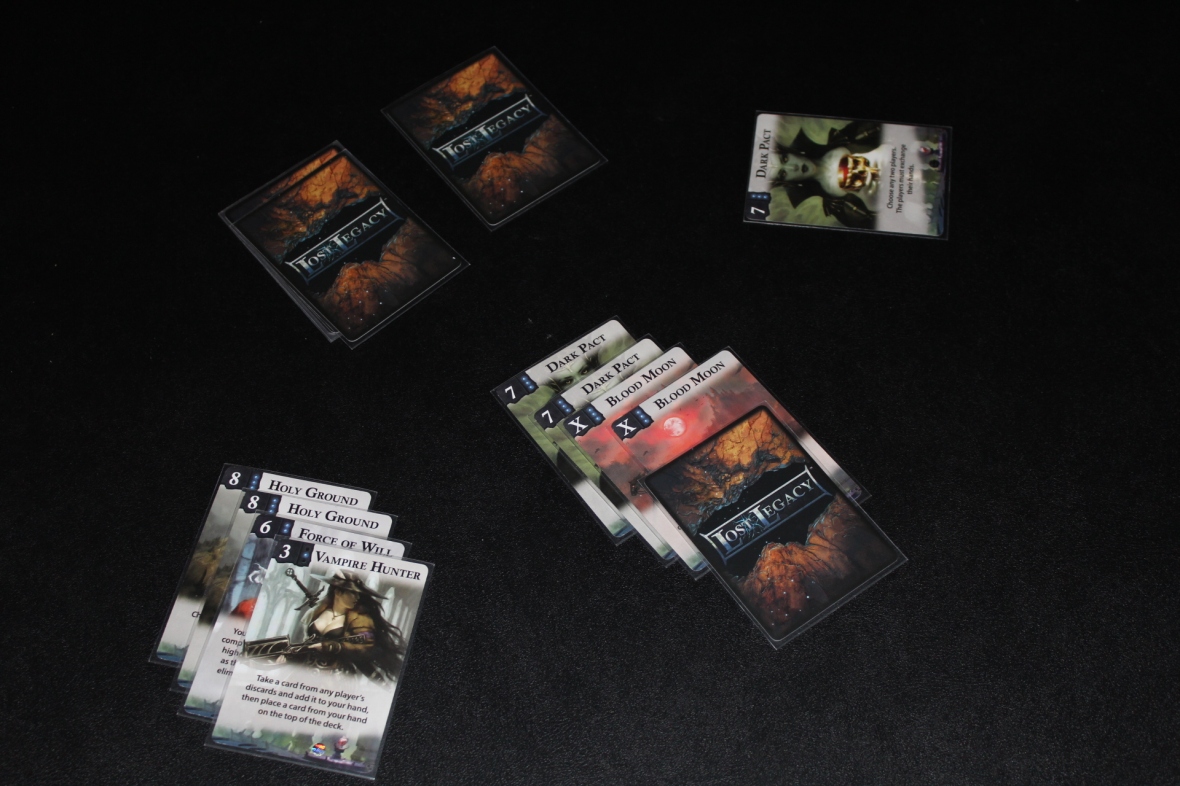 I do generally like this deck, though I prefer The Werewolf deck if I have to play with any one of them. If I’m playing with two, I think they work pretty well together, so I’d play with these two, yeah. While I find it somewhat disappointing that this doesn’t bring anything particularly new to the table, it DOES mix together a bunch of cards and general styles from other decks that I really liked, making it a cool set to have. It’s also a pretty good set for teaching people how to play Lost Legacy, similar to The Starship, but I think it has more interesting effects, so I’d probably pick this to start with over The Starship.

This is a really solid Chronicle, and probably is the one I’d recommend to new players who are looking to get started, since Sacred Grail is a bit weird and I don’t personally like Whitegold Spire all that much. That being said, I think the Third Chronicle adds the most to the game in terms of gameplay, so it’s slightly edging out the Fourth Chronicle for my personal favorite overall, which is totally fine.

Generally, I don’t think you can go wrong with any of the Lost Legacy Chronicles, but if you’re looking for a good start, I think this might be the one to go for. If you’re looking to advance your collection, it adds a few new fun things via The Werewolf and a few solid strategies and synergies via Undying Heart, but it doesn’t particularly synergize well with the other Lost Legacy sets, from my experience. It’s not as bad as Whitegold Spire or Sacred Grail + other sets, but it’s definitely no Flying Garden / The Starship / Vorpal Sword / Staff of Dragons combination, which I think are the main four to combine. Overall, I’d still suggest picking it up and trying it out and figuring out what works for you! It’s a very enjoyable microgame.