All you ask is a tall ship and a star to steer her by. And someone who knows how to steer ships using stars. You finally got some of those rivers you’d wanted, and they led to the sea. These are dangerous, pirate-infested waters, and you cautiously send rat-infested ships across them, to establish lucrative trade at far-off merchant-infested ports. First, you will take over some islands, as a foothold. The natives seem friendly enough, crying their peace cries, and giving you spears and poison darts before you are even close enough to accept them properly. When you finally reach those ports you will conquer them, and from there you will look for more rivers. One day, all the rivers will be yours.

So I’ve sort of locked myself into a pattern where every four posts I make needs to be a Dominion expansion of some kind, as to maintain a vertical line of Dominion on the desktop version of my blog’s home page. Yes, you heard it here first; that’s literally the only reason I’m doing this.

But there’s nothing wrong with that.

Dominion: Seaside is the first non-standalone expansion to Dominion (yes, Dominion: Intrigue can be played standalone — check out that review for more information), so you must own either Dominion, Dominion: Intrigue, or the wonderful Dominion: Base Cards to play this. For this review, I’ll be using the Base Cards because they’re very pretty and then I don’t have to open any of the larger boxes (also note the lack of base cards in the featured photo). In Seaside (as I will henceforth refer to it), you’re looking to expand your already-considerable empire into the tropics via a nautical theme, and Seaside changes things up by introducing a completely-new type of card: Durations! To find out more, keep reading.

Setup remains identical to Dominion and Intrigue, and since this is an expansion I’d recommend checking those out. Still a bunch of cards (26 sets!):

Set aside the base cards (Copper, Silver, Gold, Estate, Duchy, Province, Curse), and give three Estates and seven Coppers to every player to form their starting deck. Set the base cards up like so: 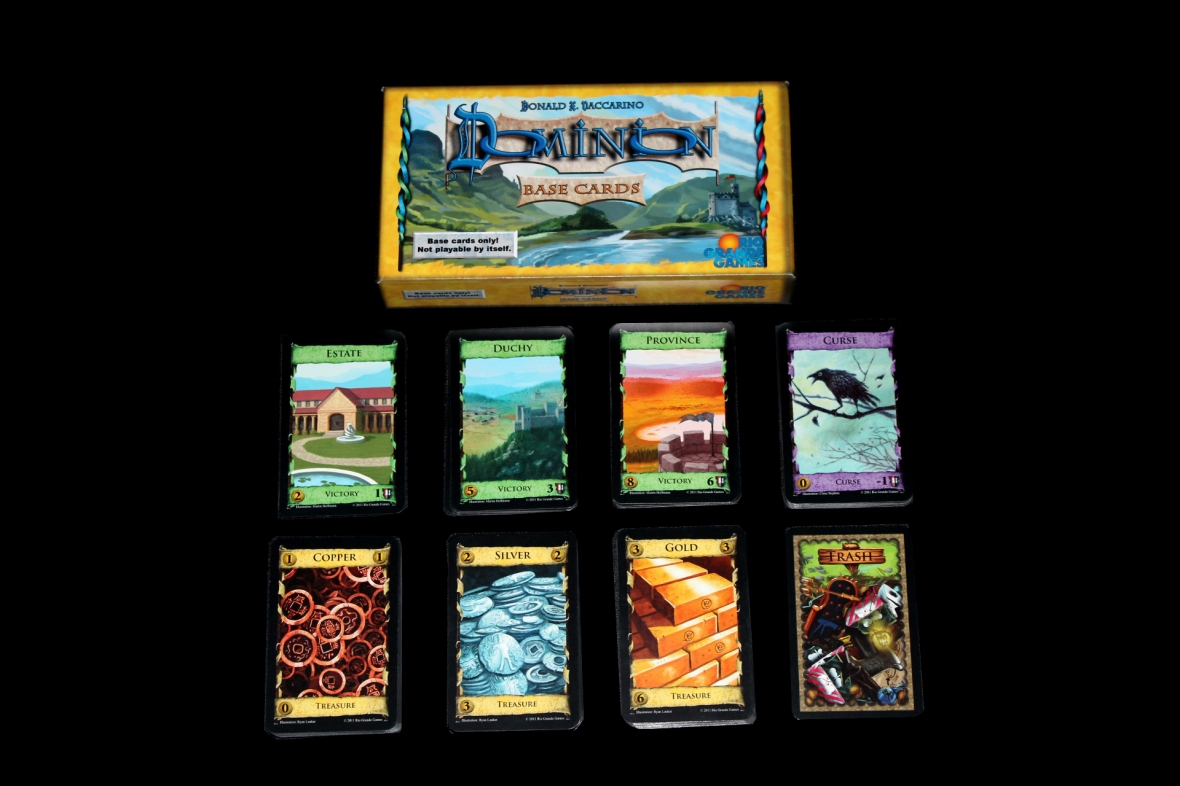 See how pretty the base cards are? Just wait for my Prosperity review; Colony is my favorite.

As always, remove certain amounts of cards, depending on your player count:

Next use the Randomizer cards, or honestly use Randominion or another app if you’re playing with more than one set: 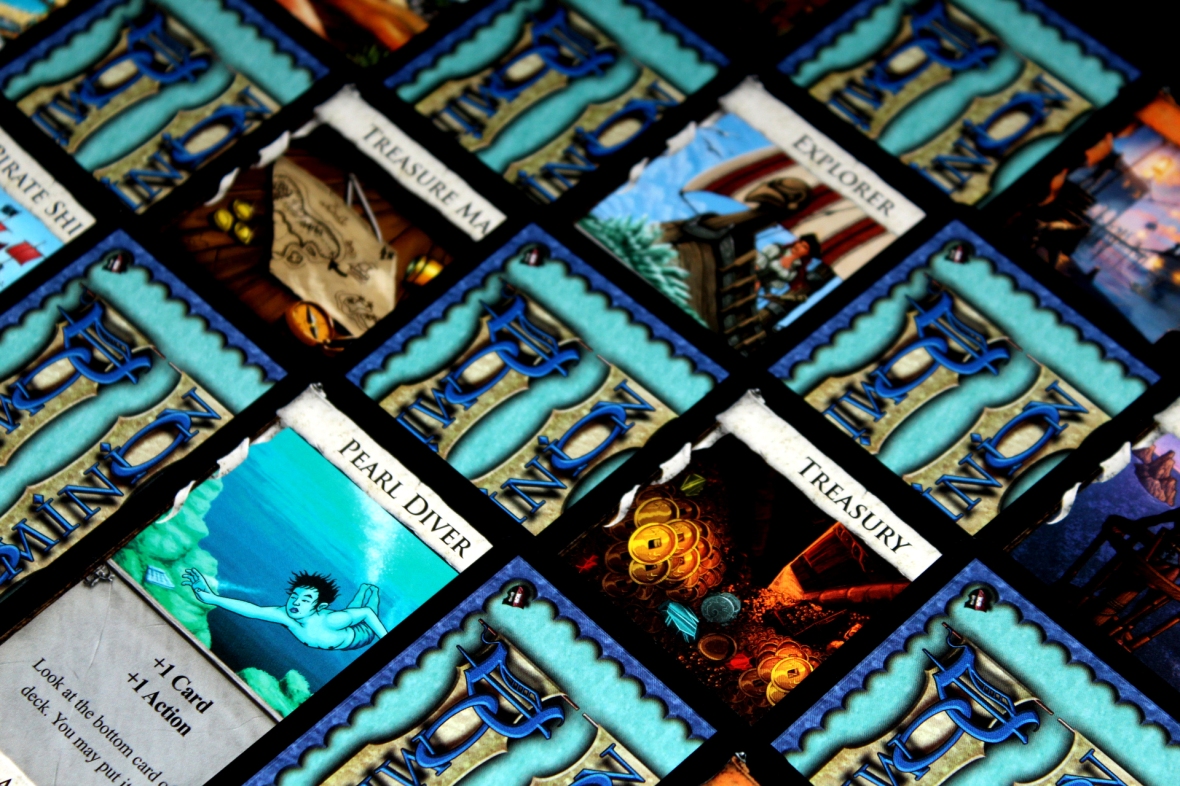 Take 10 Kingdom Card sets (and their mats, if you really feel like you must) and set them out, and have each player draw a hand of five cards. Once your setup looks like this, you’re ready to go:

I’m cutting you off, just so you know. At this point, if you don’t know what a deckbuilder is, please see my explanations for Paperback, Flip City, Dominion, or Intrigue. I’m going to proceed as if we’ve already had that talk.

…And that’s how a deckbuilder works. Great, so now that you know that, let’s talk gameplay. Unlike previous Dominion games, there are five types of cards that can be used, and, as mentioned previously, Seaside adds another totally-new card type to the Dominion universe, namely, Duration Cards: 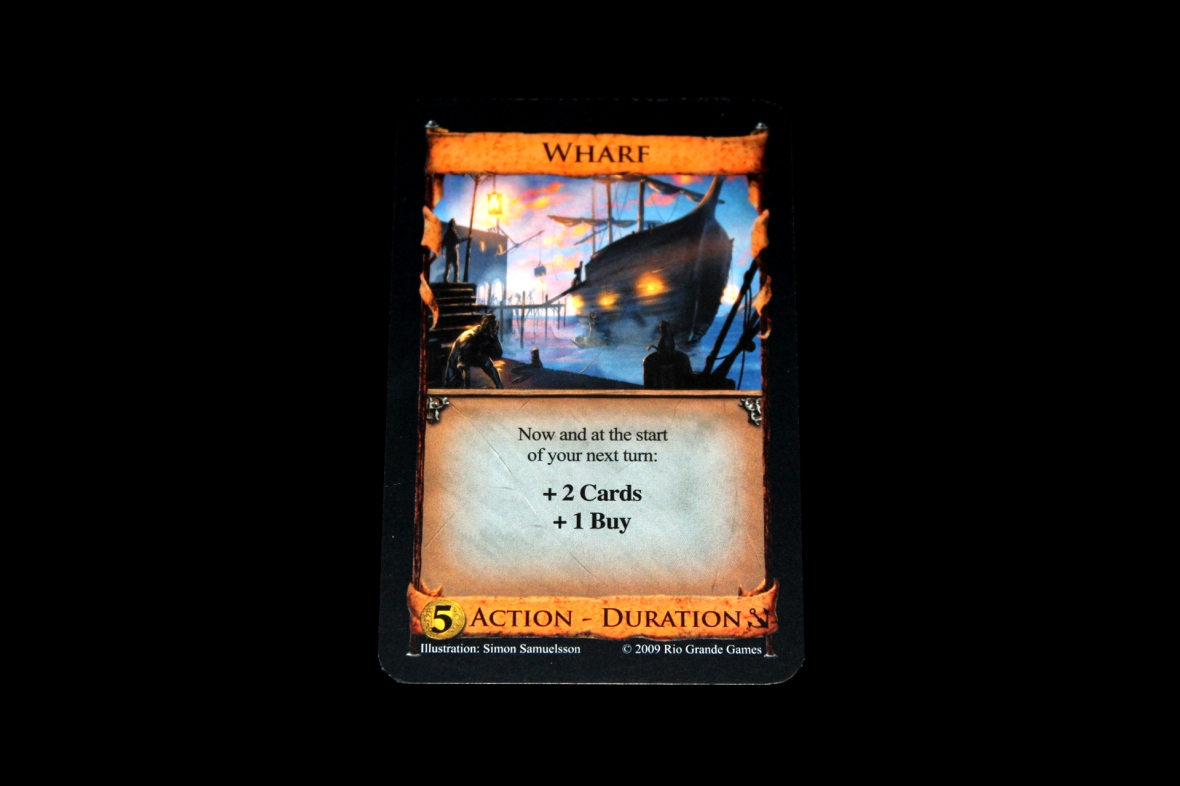 As you can see, they are cards that give you an ability both when played and later. They stay in play until they’ve completely fulfilled that function.

Again, your turn has two phases: the Action Phase and the Buy Phase. During the Action Phase, you can play one Action card. During the Buy Phase, you can reveal and play Treasure Cards and then buy one card from the Supply (the Kingdom cards + Treasure cards + Victory cards + … Curses, if that helps your strategy [which it … could?]), provided you can pay its cost (bottom-left number).

All cards have a title (top), a cost (bottom-left), and their type or types (bottom-center), but their effects are very different. Generally, along with some optional explanatory text, Action cards will have some effects that could enhance the rest of your turn:

And that’s the end of your turn! Well, almost. You still have your Clean-Up Phase. As mentioned previously, discard everything except for active Duration cards (actions, treasures, etc.) in front of you from play and discard any cards left in your hand. If your Duration card has been completely spent (for instance, you’ve played two turns with Wharf in play), then you can discard that. Then, the next player takes their turn and so on / so forth until the game ends. Which, is:

Note that the second case includes Coppers, Silvers, Golds, Curses, Duchies, and Estates, in addition to the normal Kingdom cards.

At that point, if playing with Island, put your Island mat cards back into your deck, and then count how many Victory points you have among your cards. Whoever has the most points wins!

Again, I personally prefer Dominion slightly more at lower player counts (for me it’s 2 > 3 > 4). With more players it might be beneficial to at least have an attack or two so that you can have something to do when it’s not your turn (as it will be increasingly as you add more players).

You’ll notice with more players that there are likely more strategies being played (since really you shouldn’t endeavor to copy someone else’s strategy), which as a result might mean you’re seeing more (and a wider variety of) attacks, and you might notice that you get fewer of certain cards from the Supply, since there are more players buying from the Supply, but the numbers of cards stay constant (save for Victory cards, which increase when you move from 2 -> 3+ players).

You should remember that the hybrid Victory card Island is still a Victory card for the purposes of having only 8 or 12 in the game, depending on player count. Other than that, it plays pretty similarly at higher player counts.

Overall, I think Seaside adds a lot to the Dominion family. More cards are always good, generally, but the new card types and options provide fun new ways to approach the game and it’s a great expansion for spicing up the game. Also, who doesn’t love vaguely nautical themes? I think this is the closest thing I currently own to a pirate game (though I’m trying to get my hands on Islebound, so hopefully that won’t be the case for long). Generally this and Prosperity are recommended for your first few expansions (which I’d agree with), so check it out if you need more Dominion in your life.