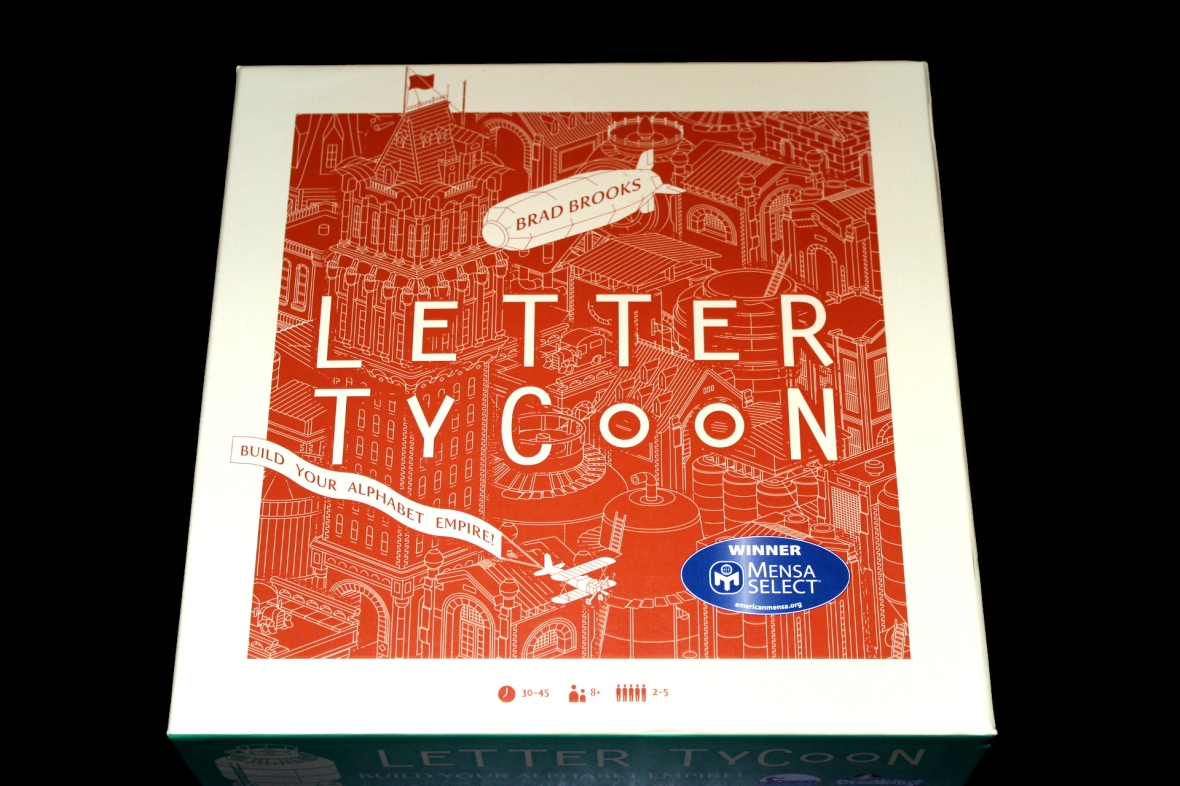 I’ve already mentioned on several posts that I really like word games, especially when they involve either yelling or spelling (or just -elling in general… I guess I enjoy Isle of Skye because it’s a selling game? I could keep going.) words. Anomia, Paperback, Codenames, and even Anaxi are all games that I’ve enjoyed. With that in mind, when I first saw Letter Tycoon, something in the back of my mind told me it’d only be a matter of time before I had to check this out, too.

Letter Tycoon challenges you to become a captain of industry among your friends (top hat and monocle optional)! Spelling words will earn you valuable money (and sometimes stock), and with that money you can buy patents on letters (technically, it’s an in-game abstraction for buying stock on physical processes, like factories or slaughterhouses, all of which are named for a different letter of the alphabet) forcing other players to help you get rich in their own pursuit of money. Will you be able to build your alphabet empire? Or will your attempts just result in alphabet soup? 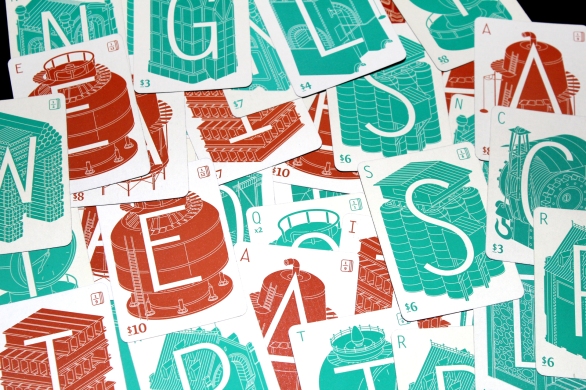 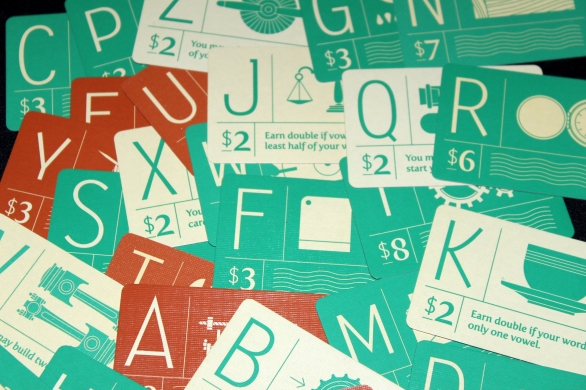 Take the letter cards and shuffle them (don’t shuffle the patent cards; you’ll only hate yourself for doing that) and then deal each player 7. Lay the patent cards in whatever order you prefer. I’d recommend A-Z; QWERTY; or, if you’re feeling particularly diabolical, Dvorak: 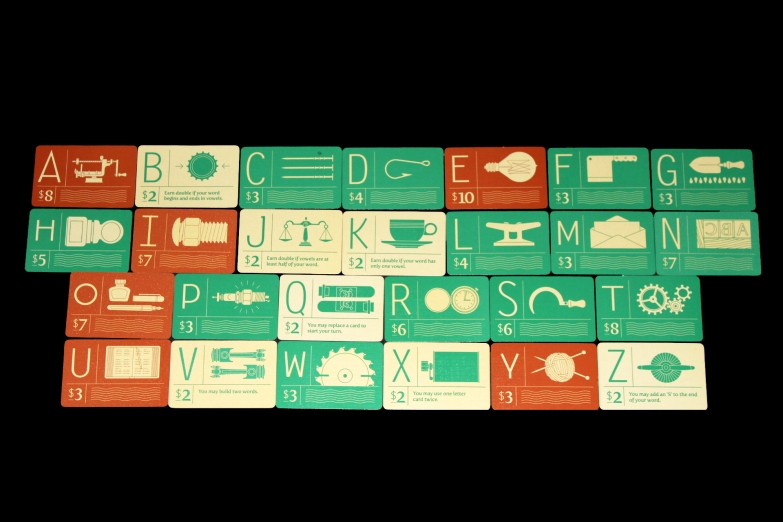 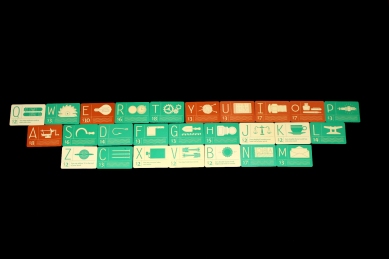 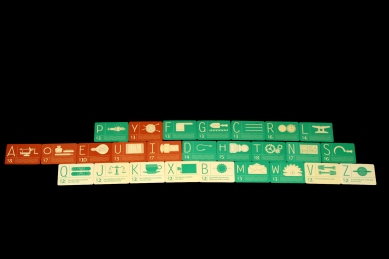 You’ll also add three cards to the community pile, near the deck and below the patents. These letters can be used by players on their turn. Set out the stocks and the money, but no player starts with any. Such is the way of the upstart tycoon. You’ll also want to take out the card that determines the end goal ($ in patents held by any one player) and set that where all players can see it.

Choose a player to begin and give them the lead zeppelin, since they are the lead player. Once your setup looks like this, you’re ready to begin: 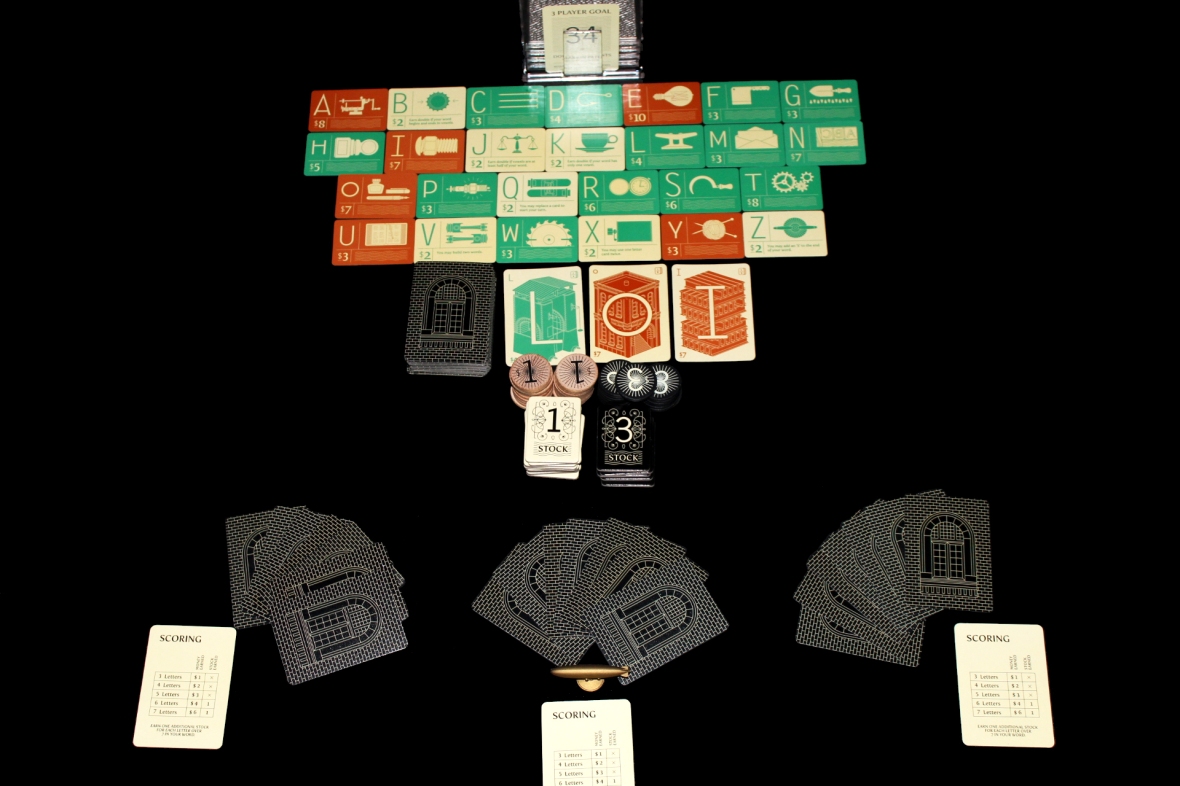 In retrospect, probably should have gone with a white background. Alas.

Gameplay progresses pretty similarly to Paperback, actually. Given your hand, you spell a word and can take advantage of the community cards (“Factory cards” to add extra letters to your words. Note that Y is weird, and may be used as a consonant or a vowel, regardless of how it actually works grammatically in that word. You might want to use that ability for certain patent cards. Then, score your words, as so:

Keep in mind that you’ll earn one extra stock for each letter over 7 in your word. That’s a solid deal! Stocks aren’t like, spendable money — they’re just points for the end of the game. Think of them as bonus points for long words. Additionally, if your word contains a Q, you earn double money AND double stock. Better try to figure out your best Q words!

Once you’ve earned your money, other players may deserve some money for their work that you used. If other players own patents on any of the letters in your word, they get $1 from the bank per letter they’ve patented in your word. (You do not get royalties for your own patents.) That means if you spell TEMPEST [which, nice] and they patented the ‘S’ and the ‘T’, they will get $3 (1 ‘S’ + 2 ‘T’s).

But now you can buy a patent! Look at the available ones, and choose any letter that was in the word you spelled. You can buy any one of those patents if you have the cash. Note that seven of the patents (‘B’, ‘J’, ‘K’, ‘Q’, ‘V’, ‘X’, and ‘Z’) have special abilities, and if you buy one you can use that ability for the rest of the game. You just have to spell a word with those letters, first! Most abilities let you “earn double” for fulfilling some condition with your word, which, like the Q card’s base ability, doubles money and stock. Note that the patent abilities don’t stack with each other generally, but the Q does. This could be used for dramatic effect.

Also, since I had to look it up myself, the Q’s patent ability lets you discard a card from your hand and draw a new one at the start of your turn.

At the end of your turn, discard all the letters you played in your word (including Factory cards!). Then, you’ll refill the Factory row. Now that you’ve done that, you can discard any number of cards from your hand and redraw up to 7 from the deck. This concludes your turn.

Let’s say you get completely screwed and you cannot spell any words, either due to your own lack of knowledge or all you have is consonants. In that case, you discard any number of cards from your hand, redraw, and your turn immediately ends. Which sucks. Try to avoid this.

Unlike a lot of games I’ve played, there are explicit challenge rules! This means no looking up words during the game. You just gotta play it from memory. Once a player has played their word, any player has the opportunity to issue a formal challenge before the next player begins their turn. Figure out if it’s a word or not (I use a Scrabble dictionary along with a general “wordiness” [similar to truthiness] about whether or not our group feels like that’s a word).

Losing a challenge sucks, by the way, so be careful that you’re spelling actual words. Standard rules apply — nothing that needs a hyphen or an apostrophe, and no proper nouns. I have to say that a lot for some reason. People love proper nouns.

Play continues until one player controls an amount of patents greater than or equal to the patent goal card in play (it varies by player). This does it Splendor-style, in which every player gets to play an equal number of turns and then the game ends.

Once the game ends, count up your money, stocks, and patent values (not # of patents, actual $ values of patents). Whoever has the most, wins!

The game changes a bit at two, since really patents are less “give me money” and more “you should never spell a word containing these letters”, which is interesting, since you give them points every time you do so. Yes, that’s also generally true, but with so many players it’s a bit easier to look at another player and say “well, they’re behind, so it’s okay if they get some money from my turn”.

Other than that, I find gameplay is pretty similar with different player counts. The only major concern is that as you add players, it becomes increasingly likely that the factory cards will all be different before your turn starts, which makes it a bit harder to plan out what words you want to spell.

Technically the game has overall about the same number of turns no matter how many players you have, but you’ll get more turns personally in a two-player game than a five-player game. The increase in the amount of money needed in patents is just to make sure the game maintains a certain length regardless of player count, which I actually really appreciate. 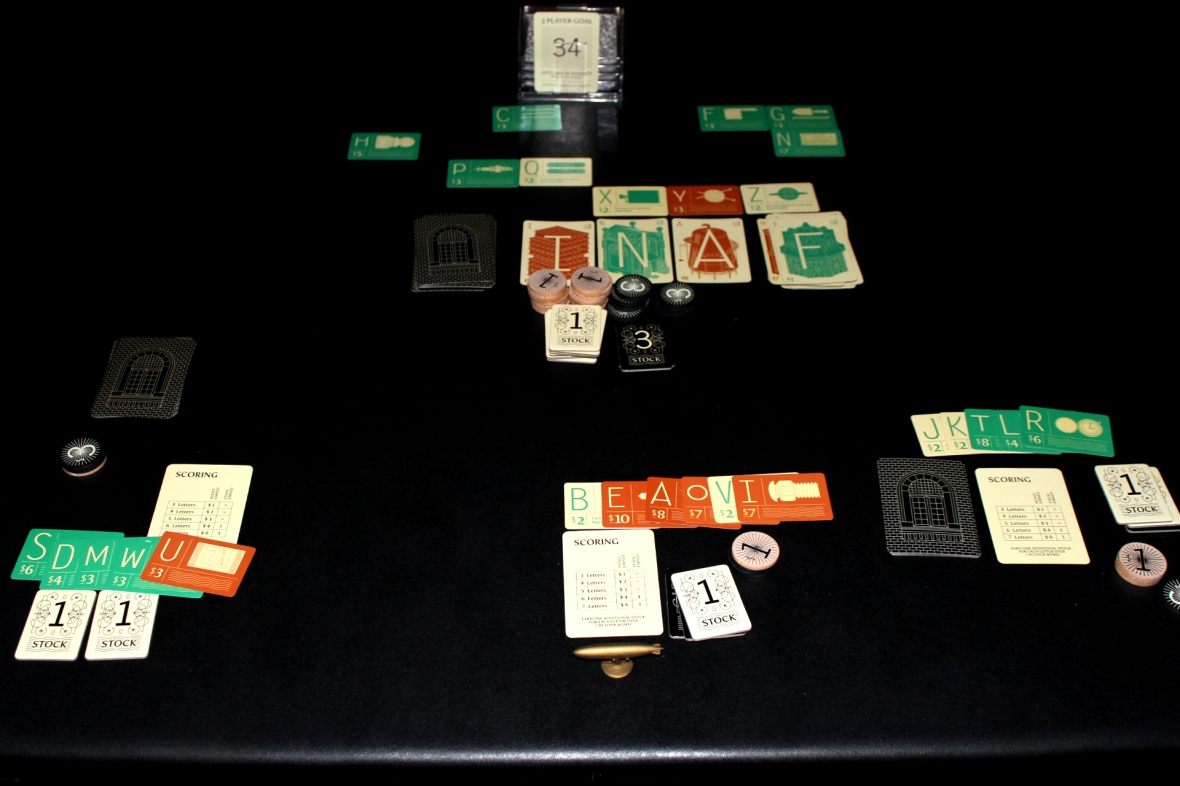 Overall, Letter Tycoon is a cute game that I feel like would appeal to people who either A) love word / spelling games or B) own smoking jackets and use the word “bully” as a favorable interjection. Either way, they’ll enjoy it for either the gameplay or the familiar theme, and I think that’s great. Sure, it’s a bit luck-based and can be a tad swingy depending on what letters and bonuses you have when (hence the score shift, a bit), but it’s an awful lot of fun anyways, and I’d definitely recommend checking it out. And it’s got zeppelins; what’s not to like?