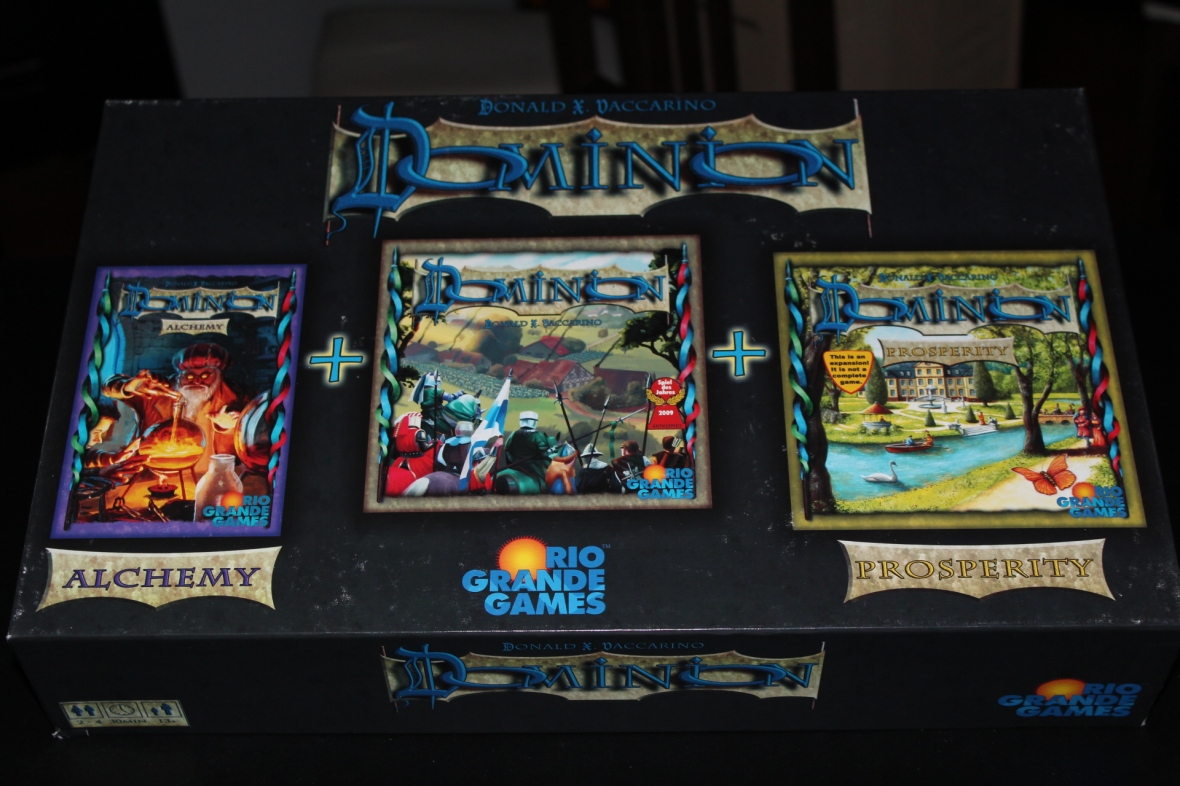 Ah, money. There’s nothing like the sound of coins clinking in your hands. You vastly prefer it to the sound of coins clinking in someone else’s hands, or the sound of coins just sitting there in a pile that no-one can quite reach without getting up. Getting up, that’s all behind you now. Life has been good to you. Just ten years ago, you were tilling your own fields in a simple straw hat. Today, your kingdom stretches from sea to sea, and your straw hat is the largest the world has ever known. You also have the world’s smallest dog, and a life-size statue of yourself made out of baklava. Sure, money can’t buy happiness, but it can buy envy, anger, and also this kind of blank feeling. You still have problems – troublesome neighbors that must be conquered. But this time, you’ll conquer them in style.

Well, I’m breaking chronological order a bit to run a tiny bit rogue, as I wasn’t really ready to review Dominion: Alchemy since I haven’t actually played it all that much. Secret’s out.

Moving on. Dominion: Prosperity is one of the more well-known expansions for Dominion, as it both comes in the Dominion: Big Box (containing Base Dominion and Alchemy as well) and is generally highly-recommended. But where Intrigue is known for cards with choices and dual actions and Seaside is known for Duration cards, Prosperity has one major theme to its expansion: money. (Also, Victory Point tokens!) So much money, in fact, that Golds and Provinces seem almost beneath you in favor of Platinums and the mysterious Colony cards. But can you earn enough money to guarantee your dominion prosperity forever?

Setup is a tiny bit different from Dominion, Intrigue, or Seaside, even though it has a similar number of sets (25, this time, 27 counting Colony / Platinum):

Mostly because it adds some new Base Cards — the 9-cost Platinum (worth 5), and the 11-cost Colony (worth 10 Victory Points):

Isn’t the Base Cards Colony great? That blue / purple is amazing.

I’m going to use the Base Cards ones because I think that the Colony in that set is absolutely beautiful, but the set itself comes with the plainer-looking ones. To each their own.

Some notes about Platinum and Colony:

Anyways, give each player 3 Estates and 7 Copper, and set up the base cards, like so: 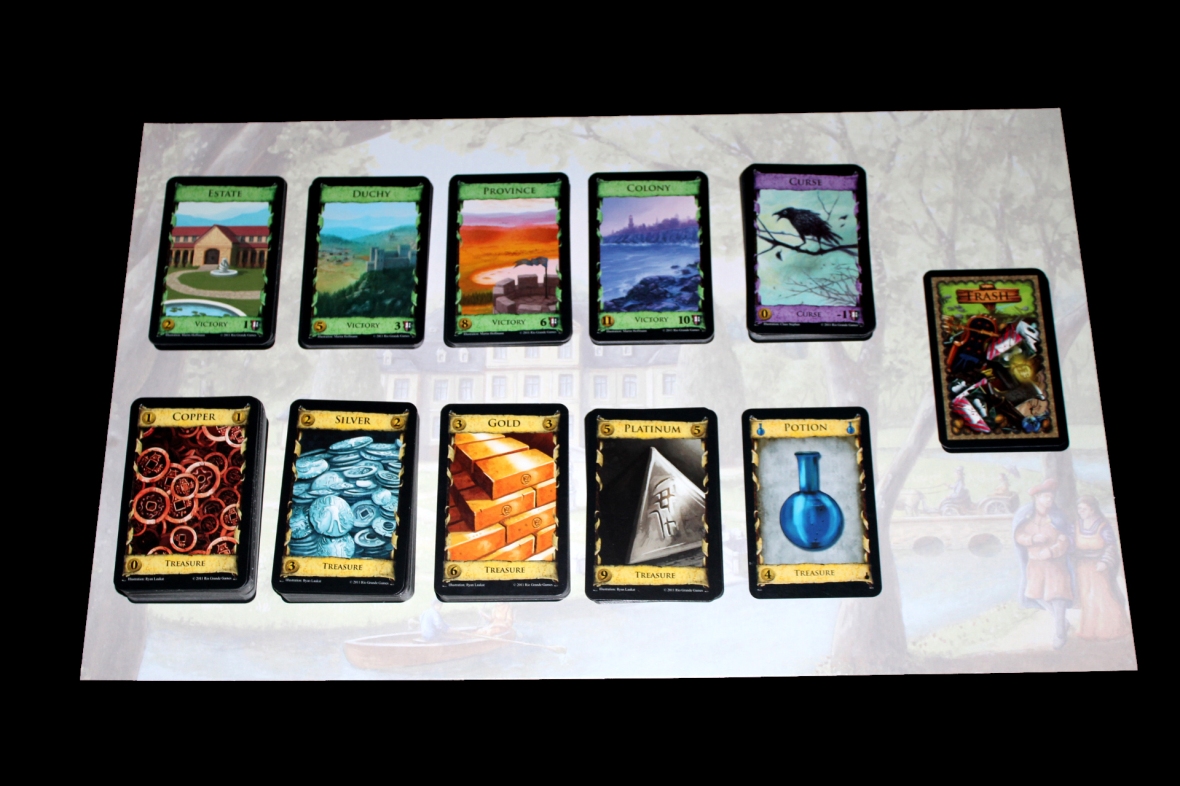 As always, remove certain amounts of cards, depending on your number of players:

Next use the Randomizer cards (with an even more forceful recommendation for Randominion or another app if you’re playing with more than one set, since I’ve covered four sets at this point) to pick 10 Kingdom card sets for the Supply:

Finally, take the Victory Point tokens and set them somewhere where all players can reach them. Once your setup looks like this, you’re ready to begin: 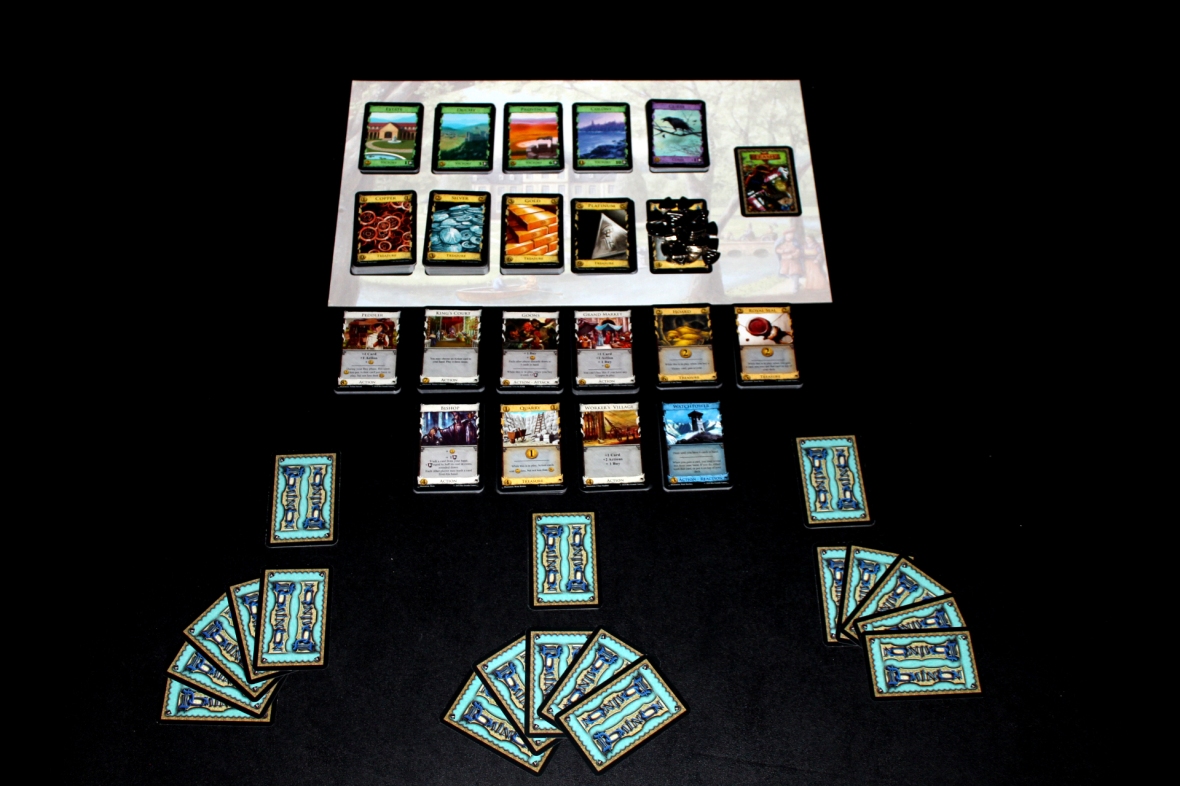 I’ve explained the general workings of a deckbuilder in other reviews, but as a quick recap that is fairly similar to my other explanations of this in previous reviews:

Your turn has two phases: the Action Phase and the Buy Phase. During the Action Phase, you can play one Action card. During the Buy Phase, you can reveal and play Treasure Cards and then buy one card from the Supply (the Kingdom cards + Treasure cards + Victory cards + Curses, if you want), provided you can pay its cost (bottom-left number). As a rule change for Prosperity, you may play as many Treasures as you want during the Buy Phase, but you must play all your Treasures before buying any cards. This is due to some Treasure cards in Prosperity that have effects on them when played during the Buy Phase.All cards have a title (top), a cost (bottom-left), and their type or types (bottom-center), but their effects are very different. Generally, along with some optional explanatory text, Action cards will have some effects that could enhance the rest of your turn:

As you might guess, being able to play more Action cards can be pretty useful, especially if you have more than one Action card in your hand. If you have no +Action cards, you only get to play one Action card before your Action Phase ends. Action cards that lack a +Action are generally referred to as terminal Actions, and you generally will see a fair number of those. Actions that provide +1 Action, +1 Card (and potentially other effects) are generally referred to as Cantrips, in case that interests you. Note that a +2 Action, +1 Card is not considered a Cantrip, generally.

After the Action Phase comes your Buy Phase, in which you play Treasure cards to accumulate money, and then spend that money on cards from the Supply. Generally, Treasure cards can be Copper (value 1), Silver (value 2), Gold (value 3) or Platinum (value 5), but there are 8 additional Treasures in Prosperity, so there will be a variety in most games. You should also count +Coins you got during the Action Phase. As usual, unless you got +Buys in the Action Phase, you can only buy one card.

And that’s the end of your turn! Well, almost. You still have your Clean-Up Phase. As mentioned previously, discard everything in front of you from play and discard any cards left in your hand. If your Duration card has been completely spent (for instance, you’ve played two turns with Wharf in play), then you can discard that. Then, the next player takes their turn and so on / so forth until the game ends.

And that’s about it! Don’t forget to count your Victory Point tokens that you’ve earned, and Player with the most points wins!

Generally, the major difference in this specific set is that Mountebank (+2 money, each other player may discard a Curse. If they don’t, they gain a Curse and a Copper) is actually made worse by increasing a player count, since you get rid of the Curse that’s protecting you from additional Curses, so you end up potentially taking a lot of Curses if every other player is playing Mountebank.

One of the other attacks, Goons, isn’t affected too much, since it forces players to discard down to three cards in hand, meaning that you can really only be hit by that card once.

Outside of those two things, generally, game just takes a bit longer with more players and piles can be depleted more quickly since there are more people vying for the same number of Kingdom Cards (with the exception of the increased number of Victory cards between a 2- and 3-player game).

Not an exhaustive list of strategies, just some emergent ones I’ve seen from games of Prosperity I’ve played, as well as some mixes with other, previous sets I’ve reviewed, if I can remember any good ones.

We called this game early because of a King’s Court + Goons + Watchtower combo. He was earning 9 VP per turn, at times.

Overall, I think Prosperity adds so much to Dominion. The addition of Colony and Platinum as the upper-bound of Victory Points(at least, until Empires…) and Treasures really gives the game some extra legs if you’d like to go a bit deeper in with Dominion strategy, though it can extend it a bit longer than you might like, depending on your preferences. While I wouldn’t say it’s essential in the same way that Inns & Cathedrals is essential to Carcassonne (since I play non-Prosperity games frequently), I think it’s probably one of the best expansions currently available for Dominion. I also love the high-cost cards in this set, as they change the game in interesting ways and enable really cool combos if done well (especially King’s Court). I’d call this a great Dominion expansion, and if you’re looking for one to pick up, you cannot go wrong with this one.

Unless you hate money.