Full disclosure: A preview copy of Reign was provided by Garage Games. I’ll mostly keep my comments limited to gameplay (since the art [done by Starcat Games] may change with Kickstarter rewards / etc.), but keep in mind that the rules and gameplay are for a game that has not yet been widely released. These are subject to change.

The king is dead. Man, that seems to happen a lot in these games. Kingmaker had it happen, Reign has it happen, it probably happened in Kingdom Builder at some point… need to get better security around kings. They don’t make them like they used to. Anyways. In Reign, you are trying to become the new king and take over the Onyx Crown, probably because you always felt like it was your birthright or you look great in crowns or you’re doing it on a dare. Regardless of your reasons, there are other fools who would challenge your legitimacy to the throne, which can really only be settled on the battlefield. That said, there are powerful houses that you will need to gain the support of in order to triumph. Can you win their approval, become Regent, and take the Onyx Crown for your own?

Setup is fairly straightforward, actually. The rules are what take a bit of explaining. You’ll first find five Support Cards (houses that can support you) and the Onyx Crown: 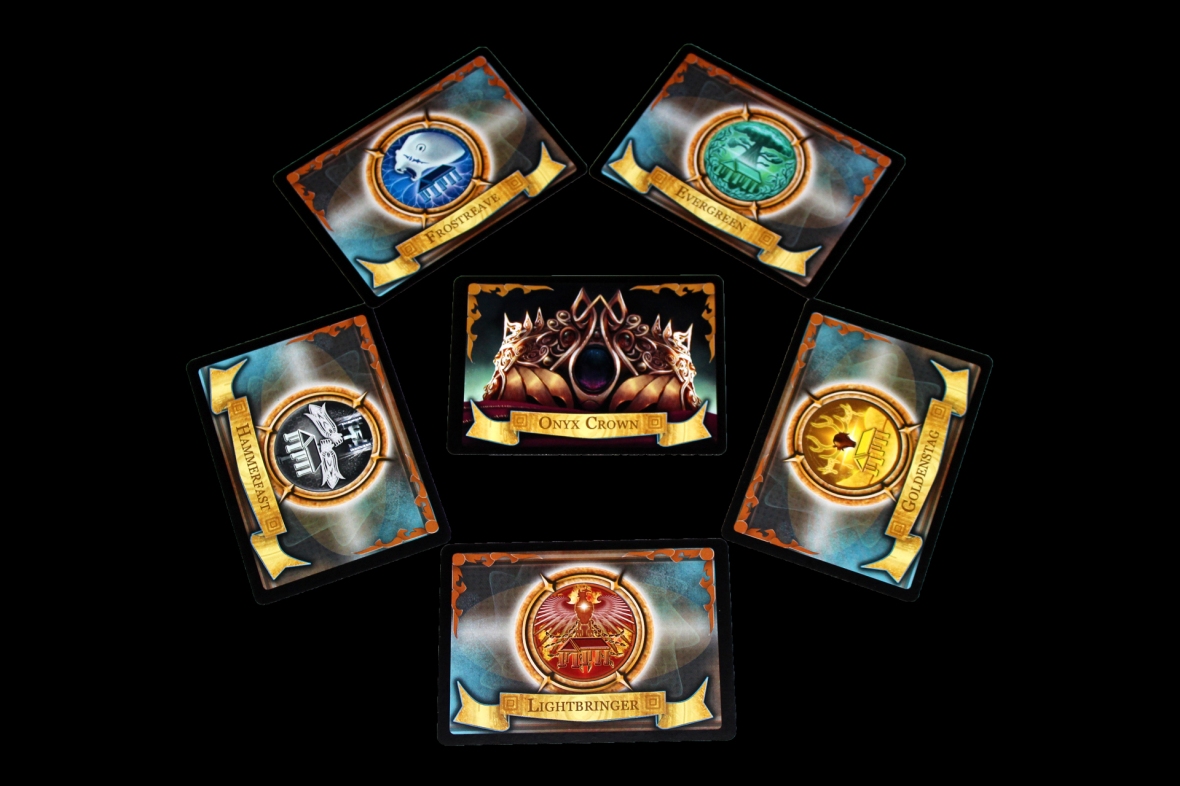 Next up, you’ll find two decks of cards. One are events:

Shuffle those and place them in a stack. The other are Military: 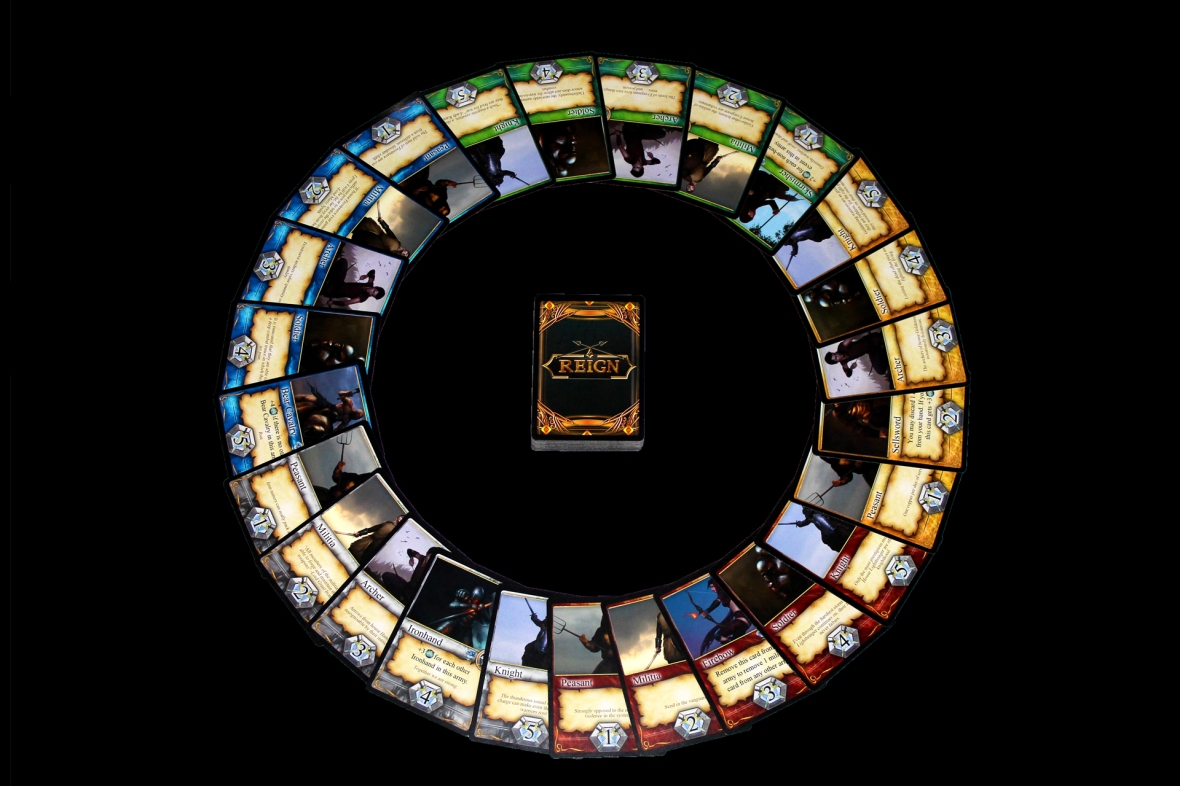 Use only the cards that match the colors of the Support cards in play, and those’ll go in a separate stack.

Once you’ve done all that, you should be ready to start. Give each player four Military cards and one Event card, and your play area should look like this if you’re ready to begin:

So the game is played in four phases, in which players vie for a house’s favor, scheme and plot against each other, devolve into war, and ultimately fall in line under a new Regent. These phases have very different rules, so I’ll go through each of them in turn. The key thing to remember this is: under normal rules, when a player is made Regent, they get three points, and those who backed them get two points. The Regent also gets to hold the Onyx Crown. Once they’ve gotten nine points and the crown, a player becomes king and wins! So you want to get the crown to get the points.

So during an influence phase, you want to bid for a house’s support. If you don’t get any, you can’t become Regent this round, so it might be important if you have any designs on, well, winning.

How do you do so? Well, you have Military cards in your hand, and you can place any number (even zero) of same-colored cards face-down to bid for that color house’s support. You can also place an “Influence” Event card down with them, which is indicated by this symbol:

Starting with the first player (or the Regent, in subsequent rounds), players play their bids face-down. Once everyone has played, everyone reveals. There are a few caveats to this:

Once this phase is resolved, move on to the Plotting Phase.

In this phase, you can overtly (and covertly) support other players in exchange for favor down the road, should they become Regent. Or just for regular favor because why not. You must play at least one card during this phase. Can’t just opt out! Besides, why would you?

First, players with a house’s support build their armies for war. Players must choose sides, and do so via Overt Backing. During Overt Backing, each player plays one card (or passes) face-up into any player’s army (including their own), provided that player has a house’s support. That Military or Event card is considered part of that army, as though that player owned that card and played it themselves. Note that cards of the same color as a player’s house Support card are worth +1 Force each. That might encourage you to back some people.

Next, Covert Backing. Each player may play up to two cards face-down in front of another player. This is secret, but still works the same as Overt Backing. If you are Regent, you may place three cards, but you must place your last card into your army.

In either phase, the person you gave the last card you played to is the player you are backing — if they become Regent, you will gain Legitimacy points (since you aligned yourself with the Proper Regent or something). Note that you don’t gain extra points for backing yourself. You just get normal Regent points, you greedy now-Regent.

That said, you can be sneaky. Not all Event cards are friendly: 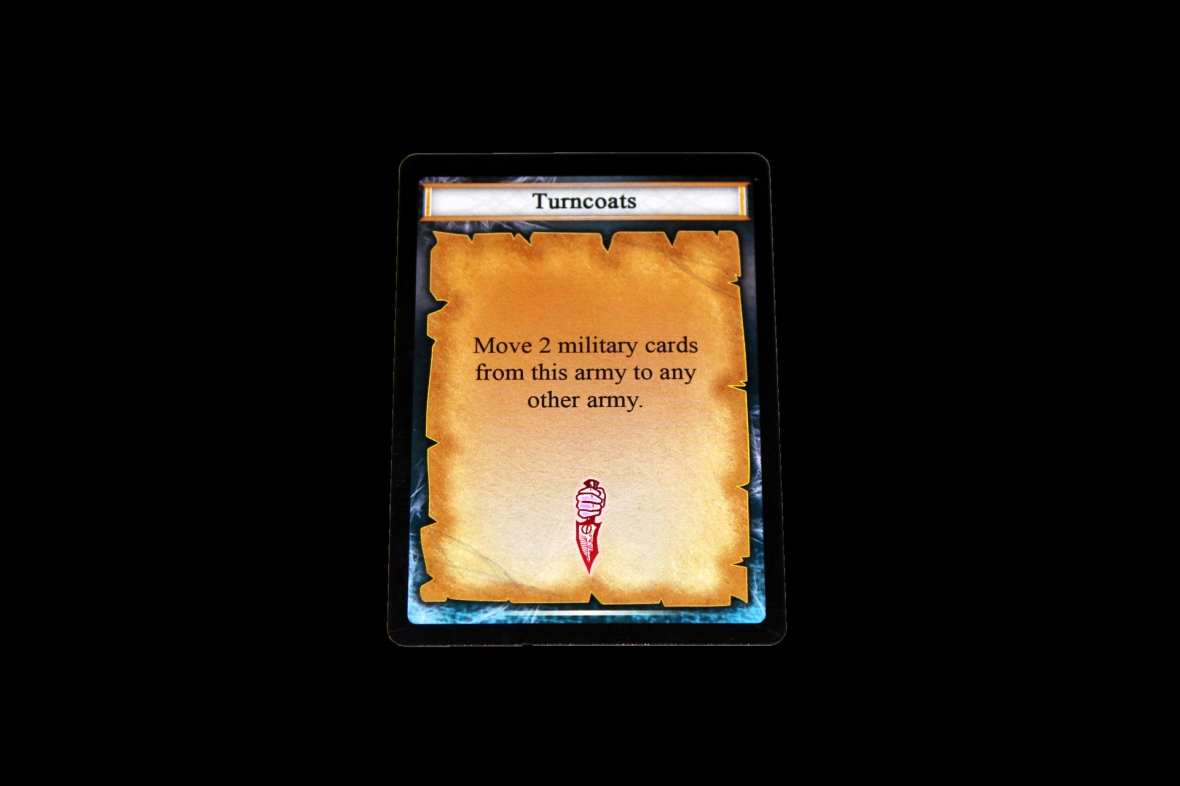 That red dagger symbol is a Betrayal Event. You’ll likely want to play that covertly, but it will always have a negative effect. Some other Event cards aren’t that positive, but Betrayal Events always hurt the player who ends up with it.

Feel free to talk it out before you give anyone cards. Negotiation is half the fun. The other half, obviously, is not following through on any of the promises you make. Do unto others and all that.

War has come, so bring your best. At this point, shuffle and reveal all face-down cards in your armies.

Tally Force (the number in the center) and resolve effects, keeping in mind that if a card in your army is the same color as your house, it is worth +1 Force. Things resolve in order of Card Effects -> Event Cards -> Betrayal Event Cards, as you might guess.

The Regent wins all ties, so … be careful. If there is no Regent, the first player breaks ties by choosing one of the tied players. It helps to make friends with the first player, especially if they end up Regent.

So this is essentially a Clean-Up Phase (sort of like drawing a new hand in Dominion). The player who won the Combat Phase is Regent — they get the Onyx Crown and three points. All other players who backed the now-Regent get two points. If the Regent has nine or more points at this point, they win. If not, play continues.

Now, the Regent draws one Military card per player and distributes them as Spoils. By the rules, you must give one card to every player that backed you (this can be either from the cards you drew or your current hand), unless someone was unwise enough to throw a Betrayal Event in your army. If that happened, you are not obliged to give anyone anything.

Discard down to eight cards if you have more than eight, and if not, the next round begins.

So far, I’ve tried this at three and six, and I preferred it at three. Generally (I’ll talk more about this later) it seems like the game ends up in a similar state, in which most players have 6-9 Legitimacy Points and the next player to become Regent will win, in which case all hell breaks lose. I’d say I prefer three for a speedier game, but six is definitely more negotiation. I also like three and four because then everyone could potentially get backed by a house and aren’t knocked out of the game in the “last round” just because they didn’t get a house’s support (more on that later, too). It also just takes longer if everyone slowly works their way up with more players because you have to have more rounds, and I feel like this game is advantaged by light, quick play.

This is a game revolving around negotiation, scheming, and table-talk. There’s gonna be a lot to do if you know what strategies to bring to the table. 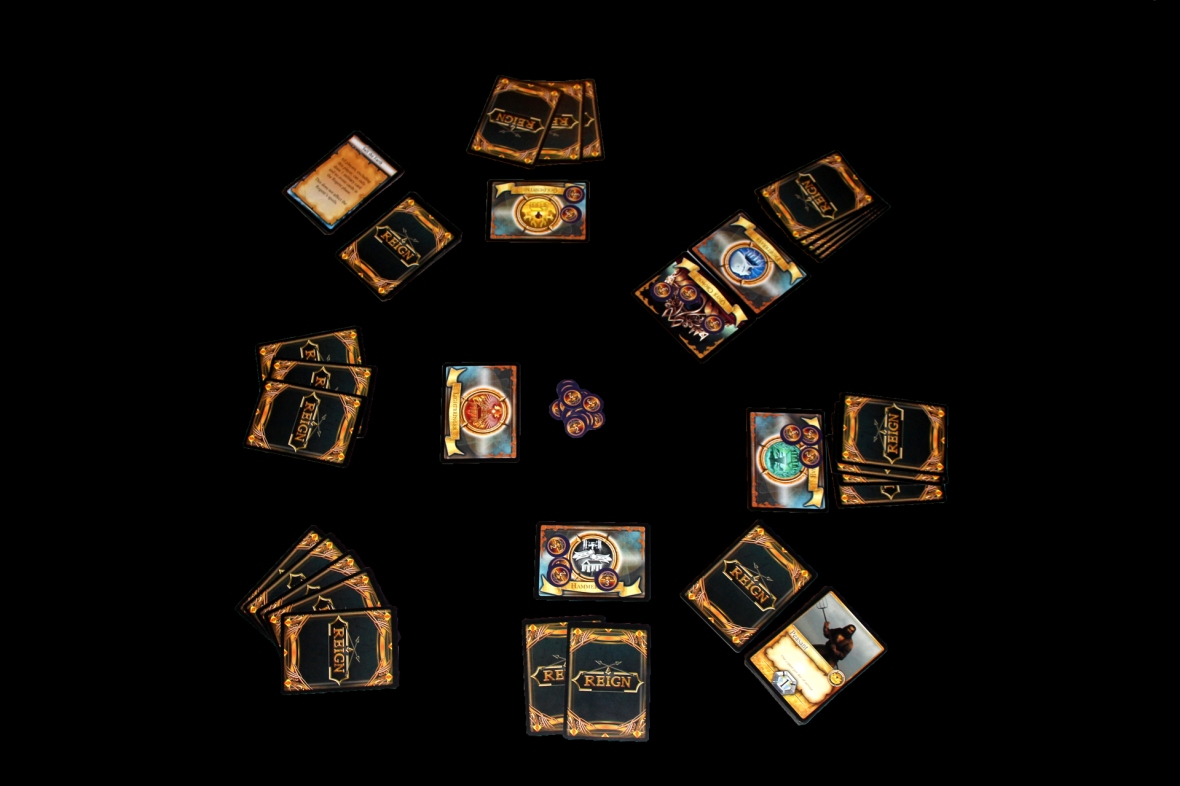 Overall, I think Reign is a good game! I’ve had several friends ask for me to bring it back to our regular game nights, which is usually an indicator of a solid game for my groups. I think I might be a bit more high on it if there were avenues for success for unlucky players towards the end of the game or if all the games I’ve played of it didn’t end the same, but I enjoy everything leading up to it, so, it’s good for me. It’s fun to try and win houses (or steal them from other players), it’s fun to back people publicly and then stab them in the back privately, and it’s fun to win the Onyx Crown as Regent. I’m especially a fan of watching factions form and coalesce around certain people and houses. It’s a cool, thematic game with a lot of fun points that I’d recommend if you’re looking for a game with a fair bit of intrigue that won’t just devolve into arguments.