It’s time for another Kickstarter game review, since that seems to have been the bulk of my game purchases in the past year. I think, in part, I’m more willing to take risks on Kickstarter games (and they tend to be cheaper than “new” games from major publishers, though there’s all kinds of bias inherent in that statement), whereas I usually just pick up expansions to games I already own or get games on recommendations from others. But you didn’t come here to read up on my buying habits. Or maybe you did, in which case, I am going to disappoint you.

In Herbaceous, you play as one (or more) players trying to pot and maintain a vibrant herb garden (which isn’t all that difficult to imagine thanks to incredible work from Beth Sobel, also known for doin’ the art for Lanterns: The Harvest Festival and Between Two Cities, among her many other works). However, you share a Community Garden between all of you, which you might be pulling from for your own personal benefit. Can you produce the best garden?

So, to set up, give each player their four pots and the private garden token matching the card backs of those pots: 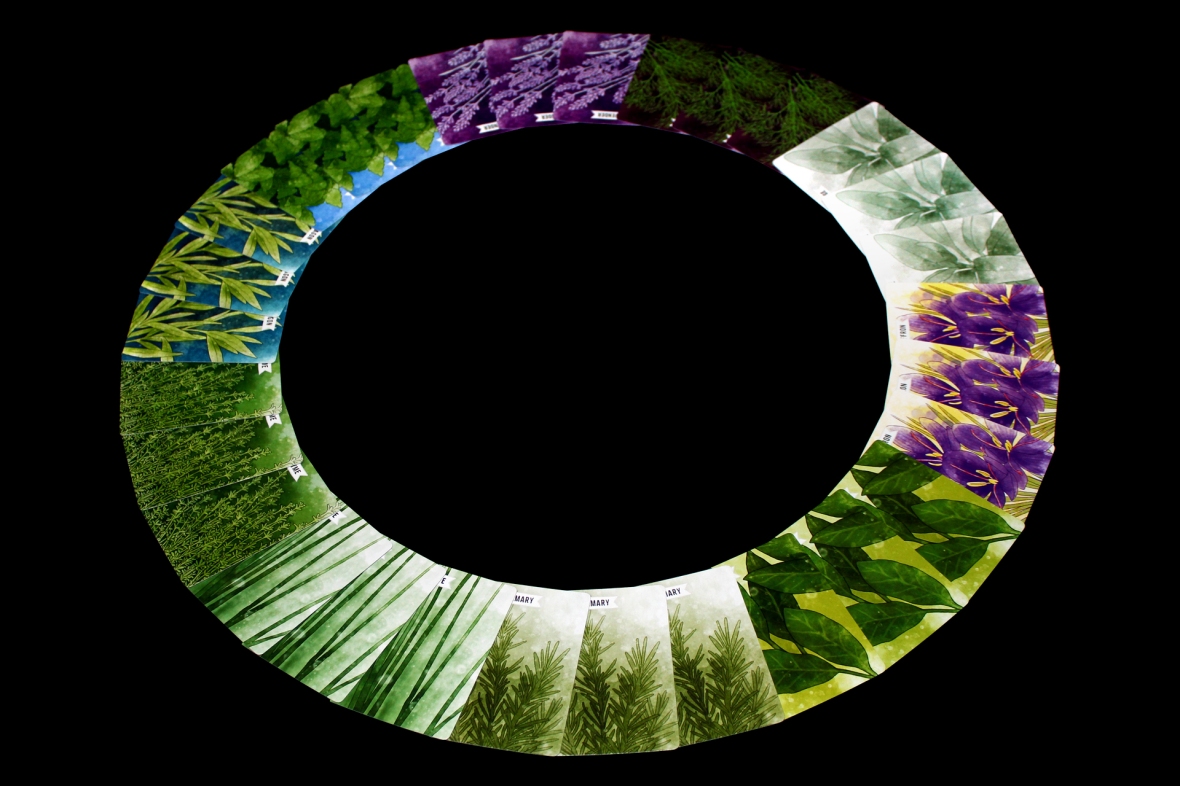 You’ll want to shuffle those and leave X in play, where:

For those of you who don’t feel like mathing, that’s:

Set the out-of-play cards aside, and then place the Herb Biscuit card where everyone can reach it:

Once you’ve done so, you should be ready to start!

Gameplay (with a special exception for the solo game) is straightforward enough. On your turn, you perform up to two actions: Pot, which is optional, and Plant, which is mandatory. Let’s take them in order.

Before Planting, you may take cards and add them to any pot you have available. Three caveats to this:

For reference, the special Herb cards look like this:

So, to pot, you take as many cards from your Private Garden and the Community Garden as you want and add them to one of four pots:

Once you’ve done (or chosen not to do) this, you move on to the Plant Action.

In this action, you plant herbs in the Community Garden and your Private Garden (with a slight adjustment for solo mode).

You will draw two cards, one at a time. Once you’ve drawn a card, you must decide before drawing another card whether it will go in the Community Garden or in your Private Garden, and then place it there. The other card must go in the place you haven’t yet played a card. Think that’s tough? In the solo game, you draw three cards, but one of them must be discarded. It’s a bit brutal (but I’ll talk more about the solo game later).

So play continues to your left once you’ve done that, with players Potting and Planting as needed until the deck runs out. Once that happens, each player can continue Potting in turn order until they can no longer Pot. At that point, the game ends. Tally your points for each pot, and then add one additional point for every unpotted card in your Private Garden. Most points wins!

So the major differences in 2 – 4 player games is the number of cards you have in the game, and this affects your strategy somewhat. For instance, in a four-player game you know every card is available (9 cards in 7 types, and 3 each of Mint, Chives, and Thyme), so you know what to watch out for. In two-player games, you might have literally 0 Chives, so you should collect Thyme for your Glass Jar instead. There’s a bit more guesswork involved when you can’t see any of the cards. It can also be a bit more frustrating at higher player counts since there are so many more turns between yours, meaning that there are more chances for someone to get lucky and drain the Community Garden.

The solo mode is particularly excellent, for the major reason that as soon as you’re done, you can immediately replay using the 36 cards you didn’t play with last game. I’ve never played an odd number of solo games in a session for this reason — it’s so short to play two. The solo game is an absolute triumph for that reason. But what else is different in solo play?

So, we’ve talked about some things, but here are the main changes:

Other than that, game’s basically identical. I’d highly recommend the solo version, and I don’t have a strong preference on player count.

For a short game, it’s got a nice bit of strategy to it. Here’s what I’d do, at least:

Honestly, a significant part of my score here is my love for Herbaceous’s super-fast super-easy solo mode, but it’s a super fun little game overall — I’ve shown it to a number of friends and they’ve all really enjoyed it, and I’ve played it maybe 20 times or so since picking it up (which approaches Santorini levels of “playing it all the time”). Is it going to be Terraforming Mars in the solo game space? No, but it’s also not trying to be. What it’s shooting for seems to be a quick, easy-to-learn game that’s fun for gamers and non-gamers alike, and I think Herbaceous hits the mark. If you’re looking for a game with a quick, replayable solo mode; a fun, engaging multiplayer experience; and incredible, detailed, colorful art, Herbaceous is an excellent choice.