Full disclosure: A preview copy of Code Triage was provided by Brando Gameworks. Some art and rules may change between my preview and the final release of the game, but I’ve previewed it in its current state. I’ve updated this with a few rules changes already.

So far I’ve covered a bunch of different games, thematically, so I’m always trying to look for more. There’s been theme parks, smoothie-making competitions, the concept of evolution, penguin slapping, and even an Ocean’s Eleven-style heist game. Surprisingly, I haven’t played any hospitals. Thankfully, that’s where Code Triage comes in. In it, you and up to three friends play as overworked, underpaid hospital employees during a frantic shift. Can you save everyone? No, but can you at least make sure the hospital doesn’t get shut down?

So there’s a board:

Set it out, as you’d suspect. Give each player a player mat and the cubes in that color, randomly: 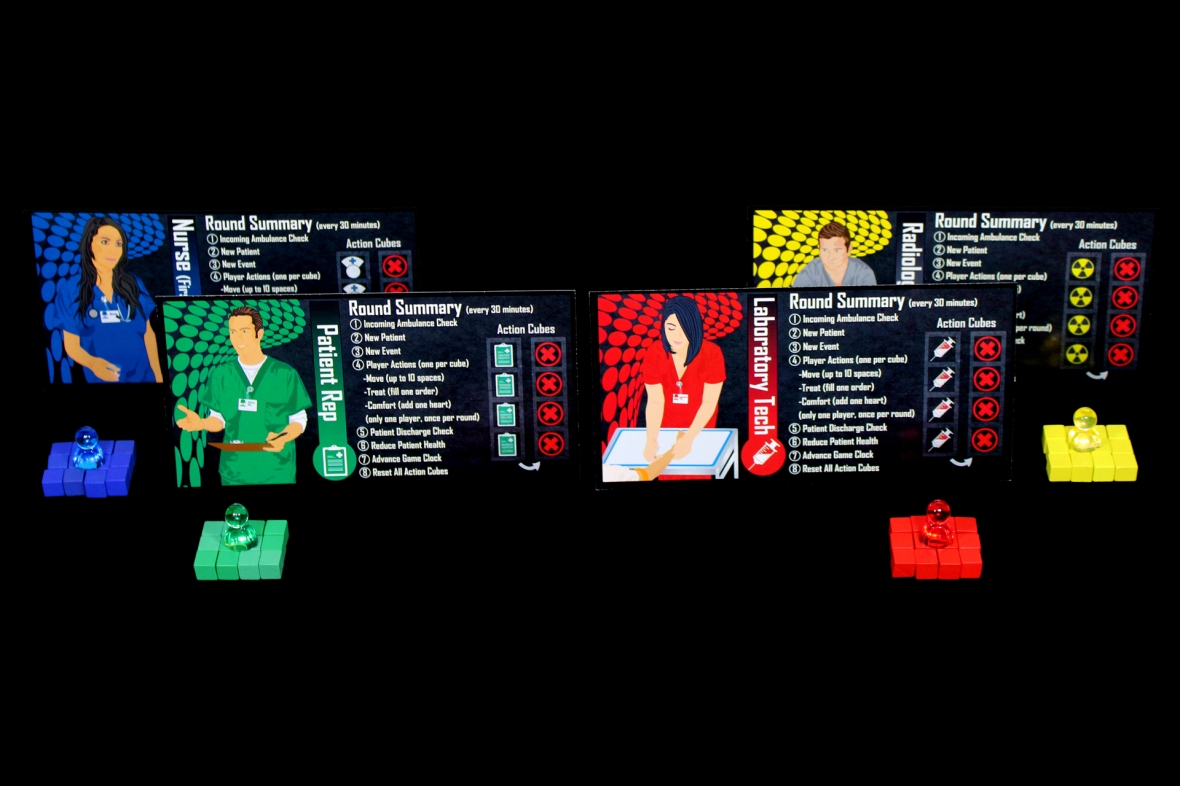 Then, there are three decks:

Shuffle them and place them on their various locations. There’s some … mature content on the leftmost deck, so if you’d prefer not to play with that (I prefer not to), then you might want to remove it straight away.

You’ll also find some heart tokens and the ambulance dice:

Set those aside — you’ll almost certainly need them. Lastly, add the various pawns to their spaces on the board, and you’ll want to set the game clock marker on a starting space:

Once you’ve done all that, you should be about ready to start! You can make the game more or less difficult by adding more starting patients:

This part’s actually pretty straightforward. The game is played over several rounds, each round comprised of eight phases. The game ends once you’ve either lost or completed all the rounds (including the round at 7:00PM).

You lose if any of the three following conditions occur:

You win if none of those things happen to you.

Let’s go through each of the phases and I’ll explain what happens: (Note in the first round you skip the first two phases.)

Check for Incoming Ambulance (Skip for First Round)

This is a hospital, so people are going to be coming in via the Ambulance. Roll the two dice, and if the Ambulance symbol is showing, add that many patients to the hospital by flipping them off the top of the Patient deck and flipping rooms off the Room Assignment deck, and then adding their health in heart tokens to them. This can be anywhere between 0 – 3 new patients per round. Remember, if you run out of open rooms and you can’t place a patient, you lose.

Again, since it’s a hospital, people are going to be coming in pretty frequently. Every round, you’re going to flip the top cards of the Patient deck and the Room Assignment deck, and add the incoming patient to that room. You should also add their heart tokens to them to represent their health. As with before, if you run out of open rooms and you can’t place a patient, you lose.

Flip the top card of the Event deck and resolve it. Usually it’s something bad-ish (a yellow event), or something good-ish (a green event). Some events only apply to specific patients, so you’ll want to use the Filled Room Assignment cards to determine which patient receives the random effect. Other cards may cause players to sit out a round, to move more quickly or slowly, etc. It’s very Betrayal at House on the Hill-esque.

So, every player gets four actions, and you must complete all of your actions before the next player gets to take their turn, starting with the Nurse and moving in clockwise order. Here are the various actions you can perform:

Once you’ve done all that, you’re basically done with the round.

If any patient has been completely Treated (there are no empty icon spots on their card), you can discharge them! You did a good job. Remove them from their room and place them on the Discharged Pile; they’ll earn you a point when the game ends. Also, take their Room Assignment card and put it on the bottom of the Room Assignment deck. You might want to keep track of those.

Now, remove a heart token from every Patient still in the Hospital. This isn’t great.

If any patients are out of hearts, they will leave the hospital. Check their Risk to see which pile they go to — if they are AMA risk (not a red card), remove them from their room and place them on the AMA Pile; they’ll cost you two points when the game ends, since they left against medical advice. If they are a death risk (red card), they pass away. Put their card on the Expired Pile; they’ll cost you three points when the game ends. If this is the third patient to die, you lose. Try to avoid that.

Slide everyone’s Action Cubes back to the “not used” side.

Once you’ve done all this, you’re ready to start again!

Move the game clock token one 30-minute period forward. If you are already on 7:00, the game ends. So, once that happens, you haven’t lost yet, so nice work! It’s time to calculate your score.

There’s no real difference, just that one player will have to play with more than one character. This is similar to Pandemic or Burgle Bros. in that you can really always play at 4 players if you want (but unlike those games, you have to always play at 4 characters in this one).

There are a variety of ways to run your hospital well. Let me outline a few. 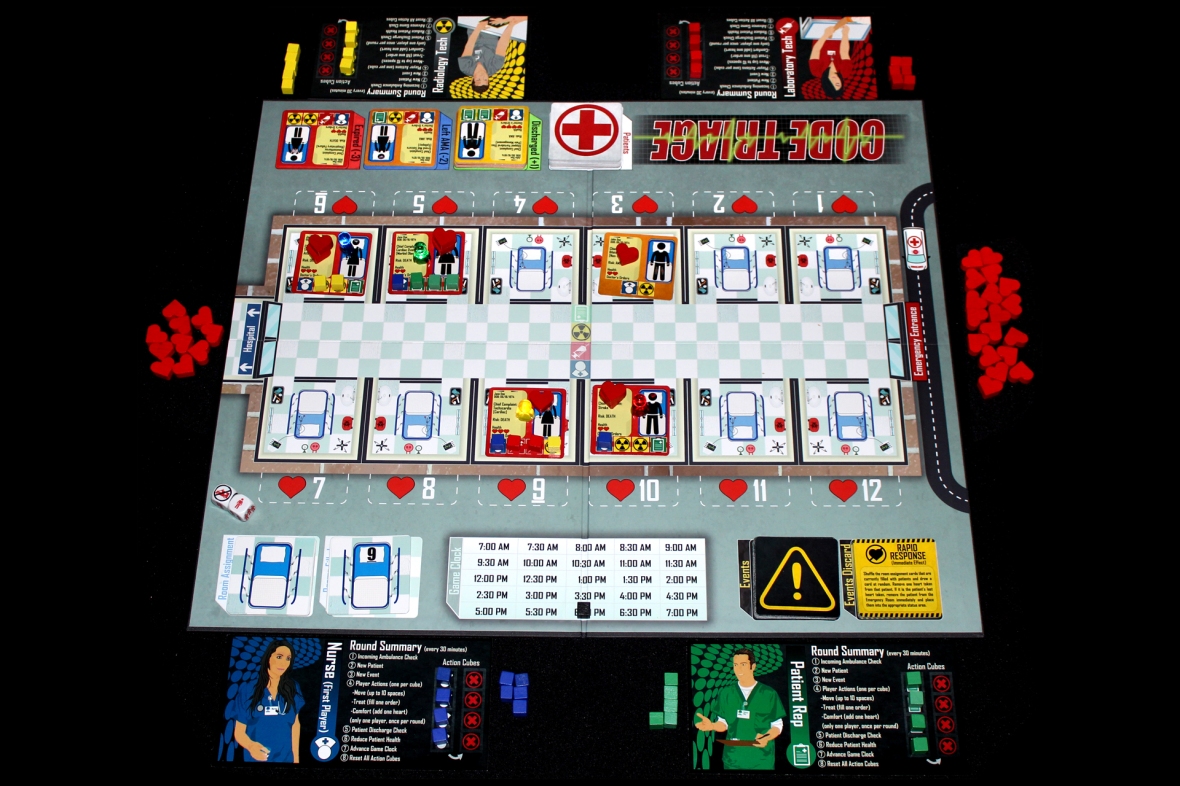 Overall, Code Triage isn’t a bad game, but I’m not sure I feel any particular inclination to get it to the table with any frequency. I do (for better or worse) compare games when I’m trying to figure out what to play (especially if they sit in similar places, like co-ops or two-player-only games), and I find that I’d probably go for a different cooperative game over Code Triage unless someone specifically asked me to play it. I think that some of the things I find frustrating are things that other people might like, like the randomness, but other things are more just mechanical things about the game that frustrate me, like the rules around movement or what Event cards are in the deck. Generally speaking, I think it’s a neat addition to the gaming space with a novel theme, but it seems like it would need to be tweaked in a few ways for me to really want to get it to the table again. If someone asked me to play it, I just would need to operate with the understanding that this has a chance of going pretty aggressively south pretty quickly, if we get some bad rolls. That said, I could see this being pretty exciting for kids / people new to modern gaming, as when it hits its sweet spot, it’s a solid cooperative. I just worry that in the state I’ve played it, it needs a few more adjustments to hit that sweet spot reliably.