Full disclosure: A review copy of They Who Were 8 was provided by Passport Game Studios.

I’ve always been a big fan of mythology. Played way too much Age of Mythology growing up, took a Greek Mythology class in college, and bought Santorini to really keep the fun going. As such, I was intrigued when I heard about They Who Were 8, a game coming from Ludicreations in which you play as players serving two of a pantheon of Gods, praising their Glory and sidestepping their Infamy.  Can you ensure your story survives?

There are two game modes, Pantheon and Titanomachy. I’ll cover Titanomachy first, and then outline the differences between that and Pantheon later.

Setup for Titanomachy is fairly simple, as this plays somewhat similarly to Between Two Cities. Each player gets dealt two of these God tiles: 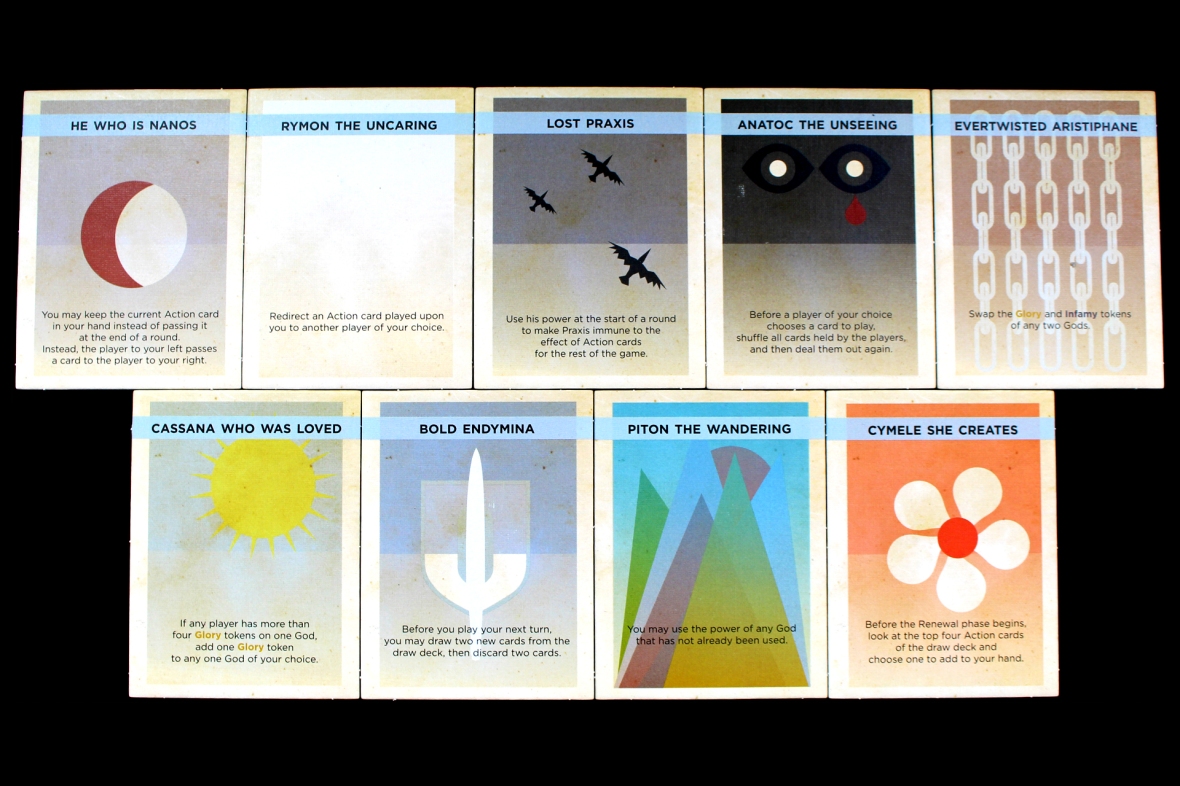 As well as three cards:

Once your play area looks like this, you should be ready to begin:

For Pantheon, you just don’t have pairs. Instead, you play with the player sitting across from you. This is a 4-player-only mode, played in teams of 2.

They Who Were 8’s Titanomachy (and Pantheon, incidentally) is played over a series of rounds, with two phases per round. I’ll cover each in depth.

You may also use one of the powers of your God, in a situational sense. There are 9 Gods, each with their own powers:

Each player takes a turn playing, resolving, and then discarding an Action card from the three in their hand. Each card can affect gods differently, depending on the symbol below it:

You’ll resolve the card by adding, removing, swapping, transferring, or doing something with the Glory and/or Infamy tokens on the table. Note that you must be able to play the card in its entirety — if you’re trying to add two Glory tokens and there’s only one left, or you want to remove an Infamy token but nobody has taken one, you cannot play that card. If you cannot play any of the cards in your hand, reveal them, discard them, and draw three more. If you still can’t play any, discard one card from your hand and your turn ends. I have never seen this happen.

Once all players have played a card, move on to the Renewal Phase.

There are four steps in the Renewal Phase, each done in order unless otherwise stated:

Keep playing rounds like this until either the Glory or Infamy token pile runs out, at which point the game ends.

Count the Glory and Infamy tokens on each player’s God tile, scoring them like this:

Determine which Pair of gods is “Dominant” (has the highest score). If there’s a tie, the pair with the most Glory tokens is dominant, and if still tied, then the pair with the god that comes first alphabetically (unclear if they mean by name or by title)

In Pantheon, you play with partners, and you’re on a team with the player across the way from you. There are only a few differences:

I can’t really imagine playing this at two. It seems frustrating, and I’ve heard as much from others who have tried it. I’ll update this if I try it at two.

Playing at four, “teams” start to form between pairs of players as they try to slowly end the game against each other, which can kind of drag a little.

At three, it seems to be a good balance of trying to figure out which player you should be helping or hurting depending on the context, which is usually good. I’d recommend this at three for Titanomachy and four for Pantheon mode.

The strategy’s a bit opaque, but there are still things you can do to help your chances: 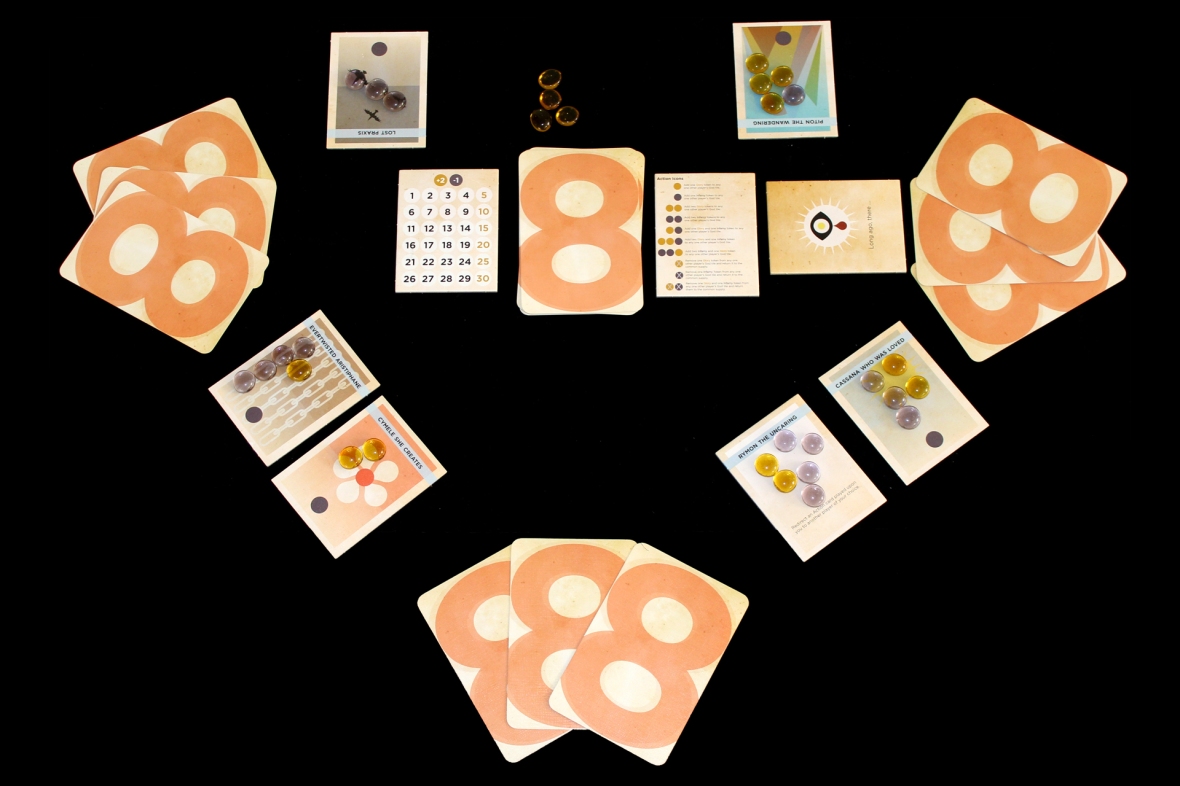 Overall, They Who Were 8 is … fine, at best, for me. Like, you could talk me into playing it again, but it might take some doing. I like the art and theme a lot, and wish it had come out more in the gameplay, maybe with some kind of storytelling aspect, given the theme. I’d also like to have seen text on the cards instead of icons, as it would give them an opportunity to eliminate ambiguity rather than passing it on to the players (and there’s a fair bit of ambiguity). I want to cut it some slack because I like the art so much, but unfortunately, relative to other games in my collection, I don’t see myself coming back to this one when I have Between Two Cities, unless I want to stop and admire the art some more. That said, I could be talked into it again, and likely will try to play it more in the future to see if my opinion changes. It’s unfortunate that it doesn’t sit well with me, given how neat the art is, but that’s how it goes, sometimes.