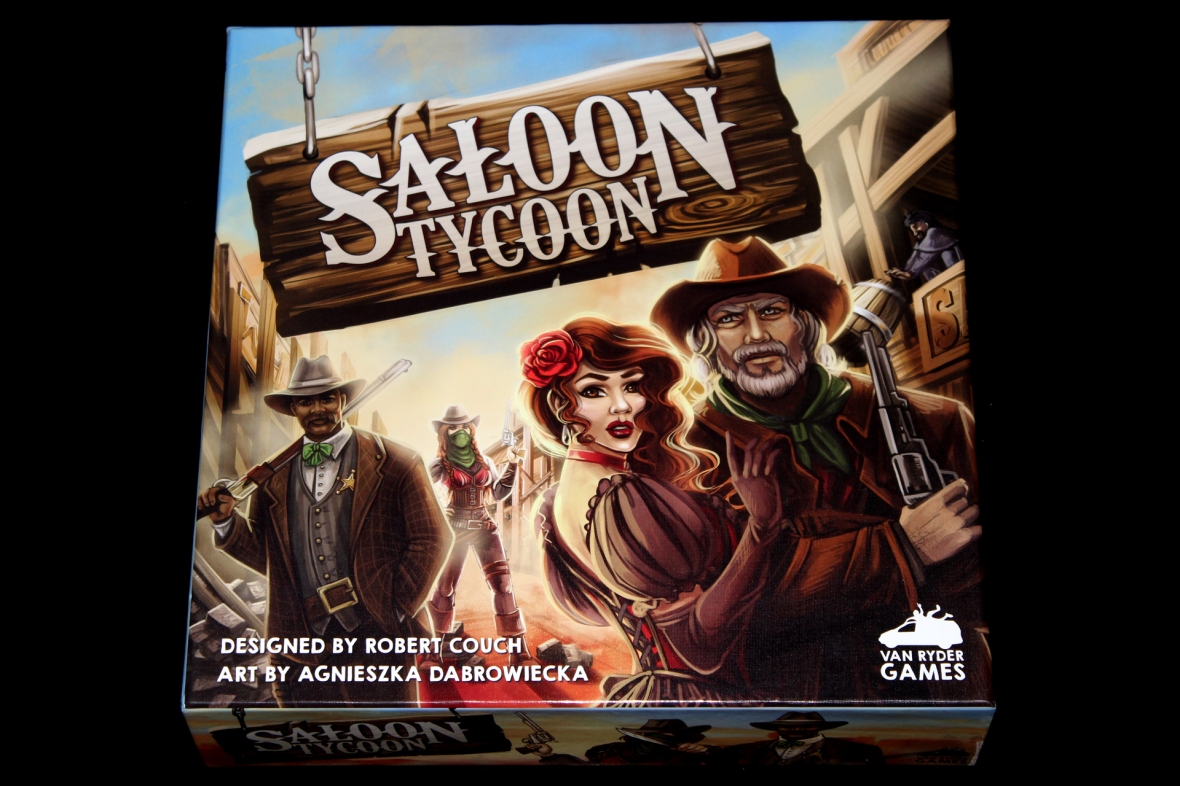 Yeehaw — I haven’t reviewed a game with a Western theme since, like BANG! The Dice game, and that was a while ago. Still gotta get around to the expansion and Tiny Epic Western, both of which are super fun.

Anyways. In Saloon Tycoon, you play one of a few local proprietors opening up a saloon in town. Sure, it starts a bit modestly, but you’ll be expanding outwards and upwards to develop your property. Just … watch out for the less-than-savory customers. Will you be able to take your newest venture to new heights?

There’s not that much setup, but it’s a bit involved, so stick with me. The first thing you should do is give each player a player board and two of the cowpeople meeples in that color:

Cowpeople meeples is actually pretty fun to say.  Anyways, have them each put one of the meeples on the “1” on their player board’s Income spot. Put the Score Track board down, too:

Next, grab a bunch of brown Supply Cubes and some gold nuggets: 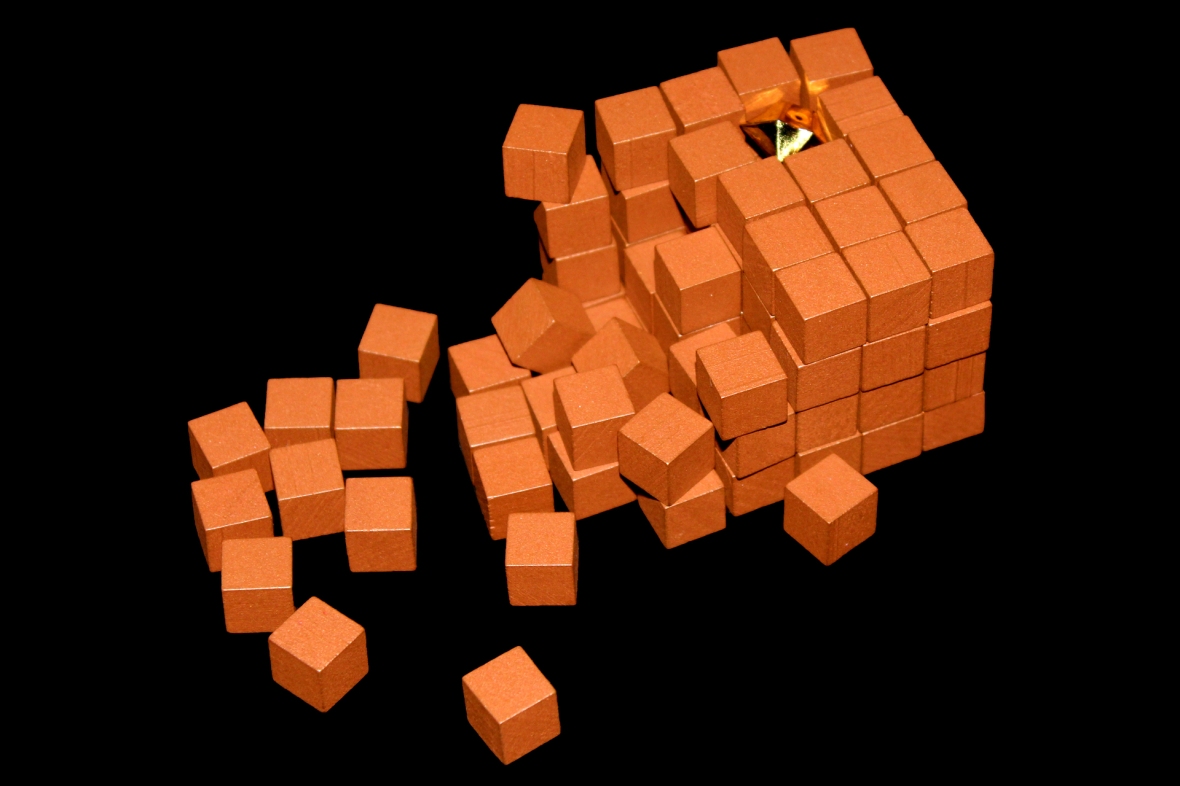 Give each player 3 gold nuggets (the big ones are worth 5). You should use a certain number of Supply Cubes for each player:

Set the rest aside. Now, give each player a Saloon: 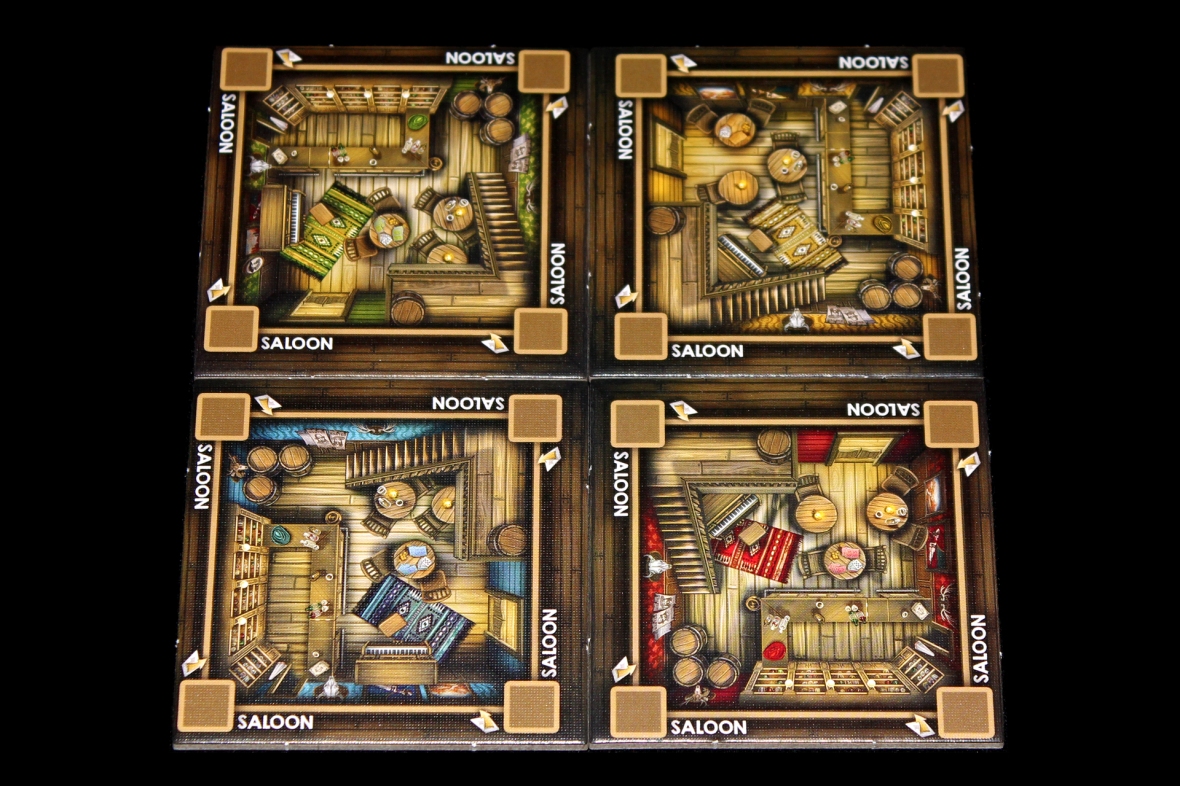 And set the rest of the tiles out:

There are a few different types and some uniques. Generally, this is how I lay them out: 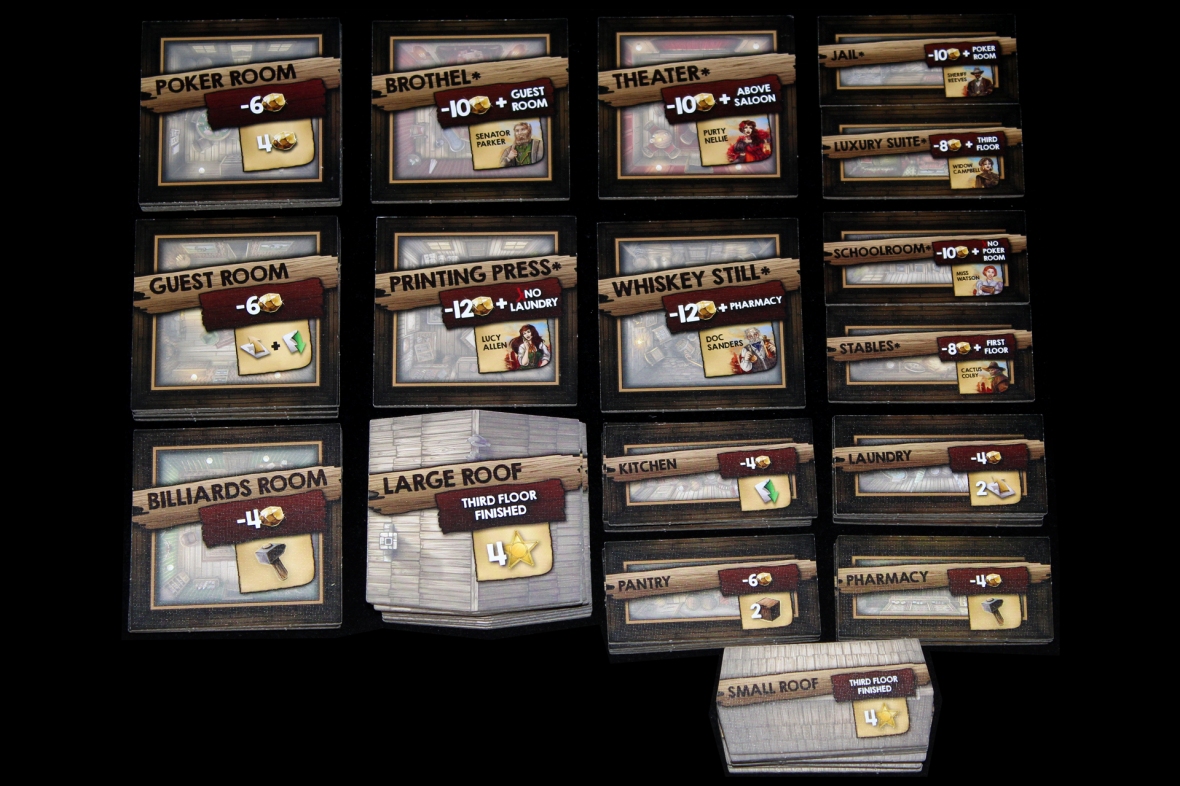 You’ll note there are even roofs, which is great. Now, give each player 3 of the Tycoon cards: 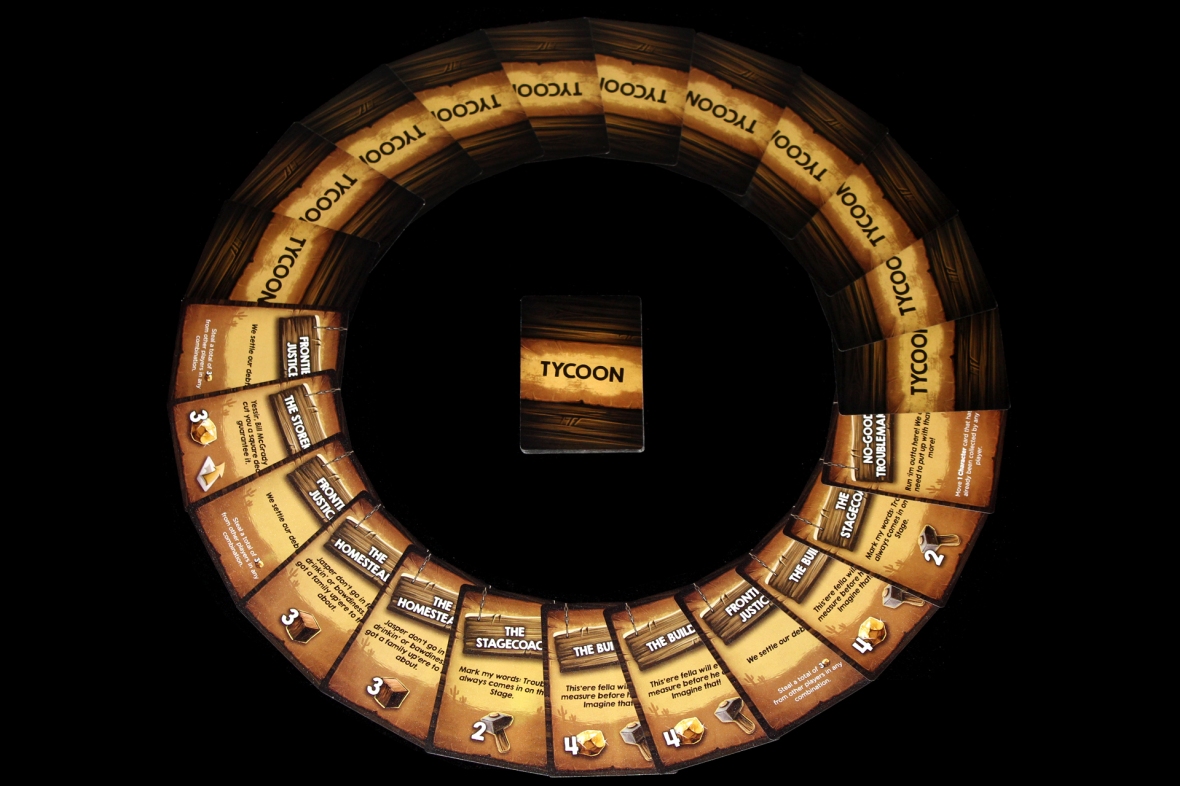 Next, give out the Claim Cards: 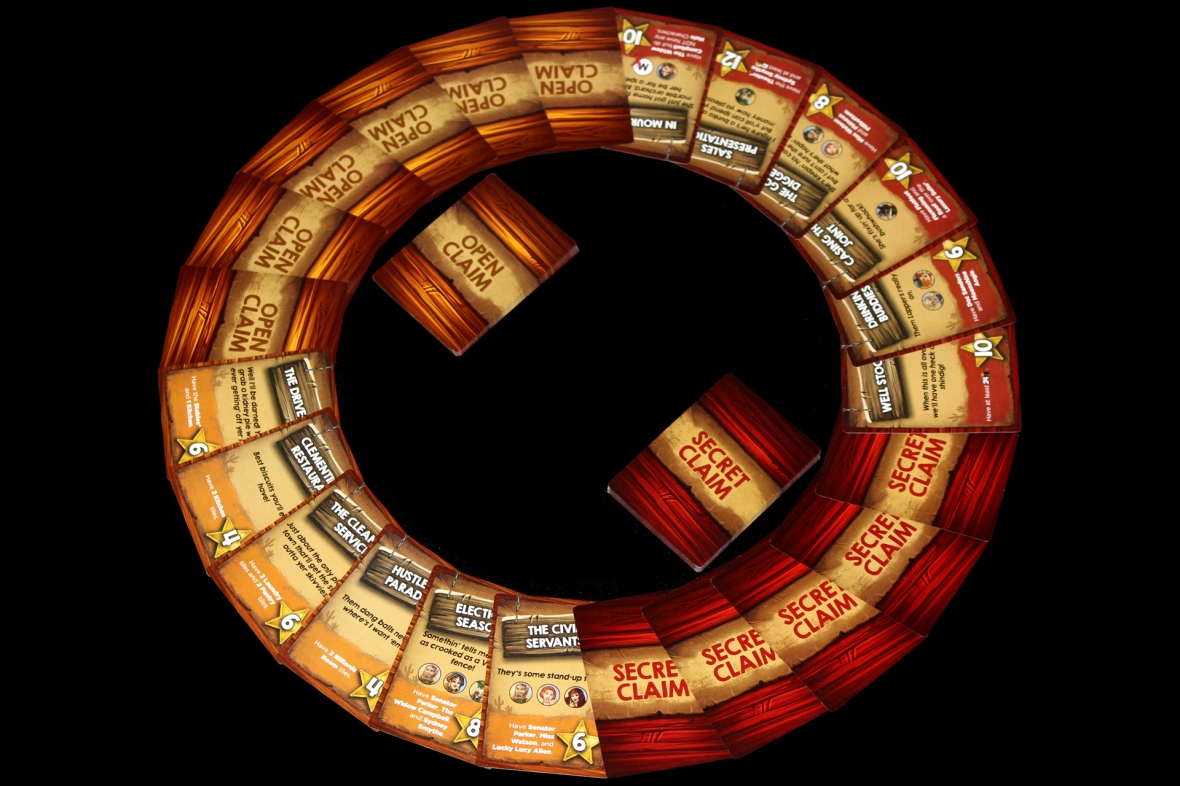 You’ll want to set Open Claim cards out like this:

And give every player 4 Secret Claims. They’ll keep 2.

Add the Citizen and Outlaw Cards somewhere on the table: 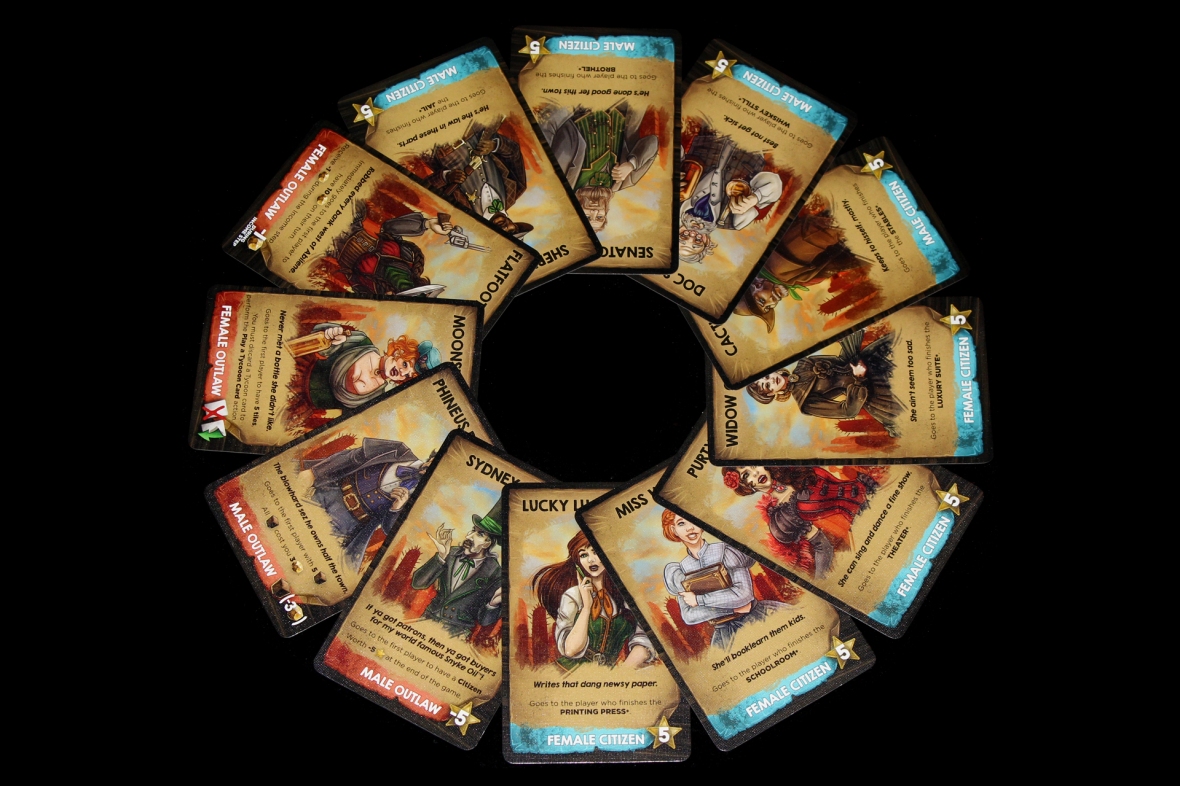 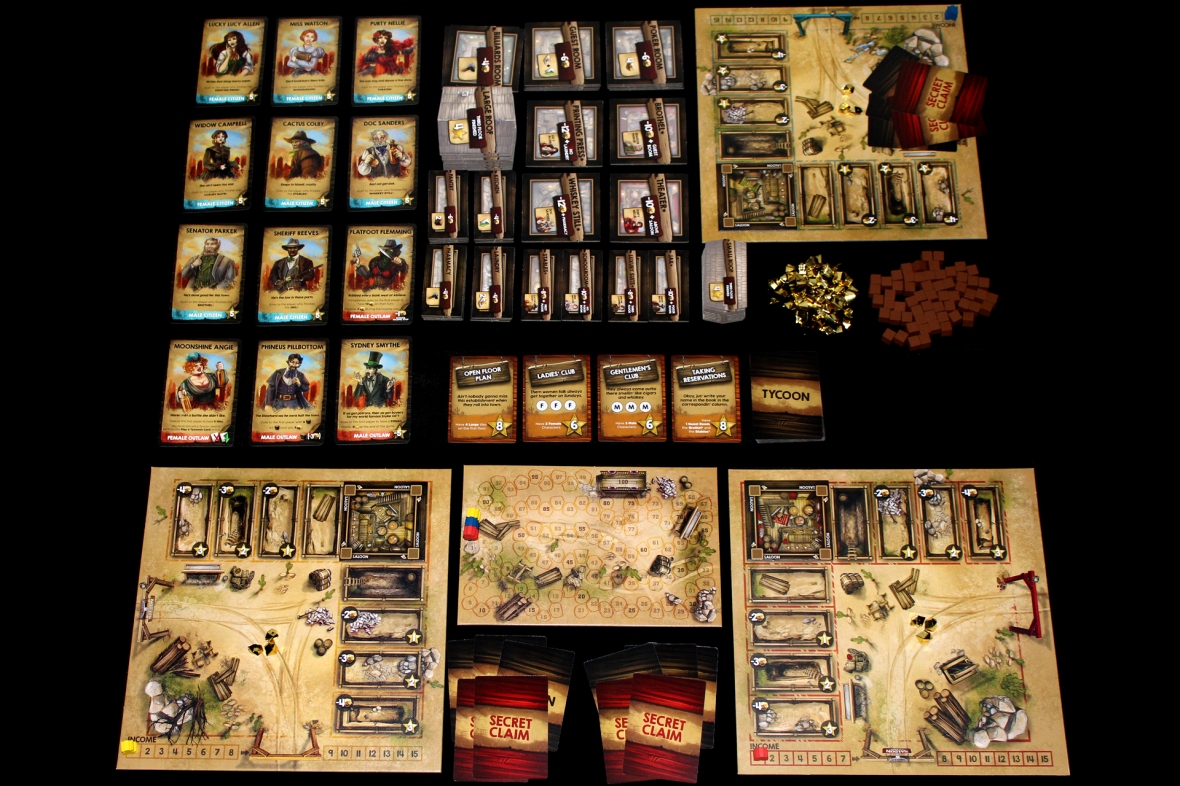 Saloon Tycoon is played over several turns, ending when the Supply Cubes pile has been depleted. On your turn, you first start by gaining your Income, and then you may take one Tycoon Action:

You may also take as many Free Actions as you want:

I’ll explain each in order.

You take 2 Gold from the gold supply.

You may draw two Tycoon Cards from the deck. If you have 4 or 5 cards in your hand before drawing, you must discard to three cards before you draw. Them’s the breaks.

You may play a Tycoon Card from your hand. These will provide benefits like being able to ignore requirements for a Special Tile; gaining Gold, Supply Cubes, extra Actions or some combination of those; or even drawing additional cards from the deck or other players’ hands. There’re a lot of options.

So you want to ostensibly build a great saloon (hence the name of the game), so you’ll be buying a few tiles.

When you buy a tile, you spend the gold required on the tile and then add it somewhere on your player board. If you place it on a spot that has a points symbol, you will need to pay extra money, but you collect those points immediately. Some tiles also have prerequisites (the Schoolroom, for instance, cannot be built if your saloon has a Poker Room; you can, however, build Poker Rooms after you’ve built the Schoolroom, you jerk) As you might suspect, you need to place it adjacent to another tile, but if you have a finished tile, you can also potentially place it on top of the finished tile. Cool, right? Note that you can only really do that by placing a Large Tile on a Large Tile or a Large Tile on two Small Tiles. You can’t place a Small Tile on a Large Tile, ever.

When you place a tile, immediately gain one Income. Nice!

So you might want to attract certain characters to town to fulfill certain parts of your Open / Secret Claims or get rid of some … less savory types. If you find that this fits your needs, you can spend 6 Gold as a Tycoon Action to move a character from anyone’s saloon area to anyone else’s saloon area. There are two caveats:

The Open Claim cards are essentially Objective cards, similar to BrilliAnts. As soon as you meet the requirements (usually having certain Citizens or Outlaws or certain numbers of characters), you immediately can take the Open Claim and score that many points.

Supply Cubes are a major currency in Saloon Tycoon. You use them to “complete” tiles by placing either 3 on a Small Tile or 4 on a Large Tile. Once you do, that tile is considered “complete” and you gain points for completing it:

You also gain a Tile Bonus, which is usually an extra action, Tycoon Card, gold, or some other effect shown on the tile itself. The Special Tiles will all give you Citizens, which are characters that can be used for Open or Secret Claims and are worth 5 points at the end of the game.

If you ever complete a third floor tile, you immediately gain a Roof Tile, placing it on the tile and gaining 4 points. The roof also counts as a tile being placed, so you gain an extra Income as well. It’s handy!

This isn’t technically a Free Action, but it happens all the same. Generally, as I mentioned earlier, if you complete a Special Room you take a Citizen that matches that room. However, if you are the first player to fulfill certain … objectives, let’s call them, you’ll also attract some seedier types to your saloon, namely, Outlaws:

While these are pretty bad, you might also need some of these around town for your Secret Claims, which … is definitely something.

Anyways, the game continues with each player taking their turn until the Supply Cubes are depleted, causing the final round to begin. Once this happens, add in all the Supply Cubes you left out before the game started so that there are still some that can be used. Every player except the current player will get one more turn, but no characters (Citizens or Outlaws) can be moved or received. This includes via completing tiles that give you Citizen cards or playing the No-Good Troublemaker Tycoon card that lets you move characters around. If, for some reason, you run out of Supply Cubes, they are not limited, so you can just fake it.

I don’t really see many differences at various player counts other than the game gets much longer. The major thing is that the Outlaws tend to have their effects diluted at larger player counts (since they can be distributed a bit better than they could at, say, two). I’d probably recommend it most at three, surprisingly, as I think that’s the right balance between the two competing factors (outlaw distribution and play time). I’d normally mention collision (multiple players competing for the same thing), but there are always more Open Claim cards, so that’s also pretty fine with player count.

Overall, I think Saloon Tycoon is a super-cool game. I love the aesthetics of building vertically, and I think the game really identifies its niche and locks it down. There are a lot of fun options, interesting paths through the game, and enough variety that I generally try to play the game differently each time and see how it goes. All of those things are good on their own, but having them combined in one package is really solid. There are some things I’m not as big of a fan of, sure, but I don’t think they impact the game experience negatively in a meaningful way. Especially now that the Ranch expansion is launching on Kickstarter, I’d recommend checking it out and giving it a whirl if you haven’t tried it! Or playing it again, if you have. I mean, that’s always an option.