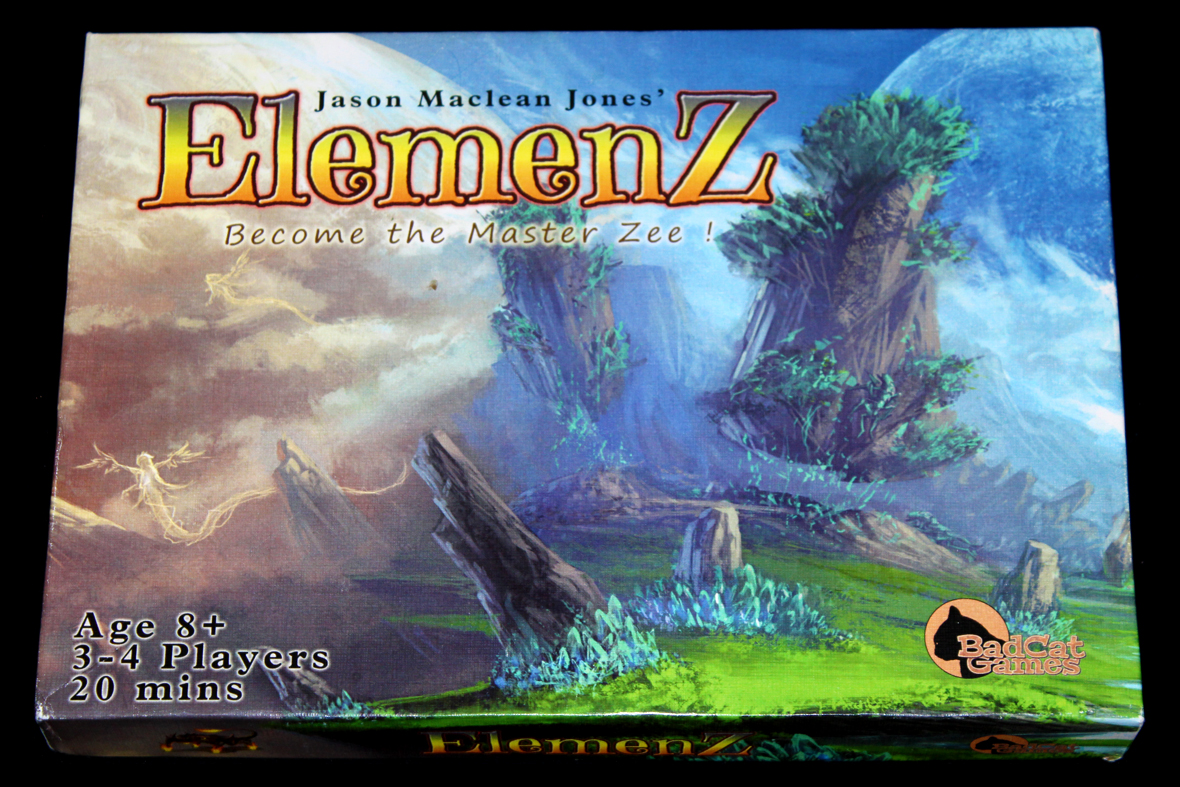 Full disclosure: A preview copy of ElemenZ was provided by Bad Cat Games. Please note that rules, components, and other features of the game may change between now and release, as this is a preview copy of an unreleased game.

Another week, another Kickstarter preview. This time it’s ElemenZ, from Bad Cat Games. In ElemenZ, you’re doing one of two things: either fighting between three or four different shamans to emerge victorious, or energize a mysterious obelisk that is both strange and mysterious. Can you bend the elements to your will?

So the two-player game is completely different from the three- and four-player game. I’m going to break these up into separate sections (both Setup and Gameplay).

Setup is actually pretty simple, regardless of player count. For this one, you’re going to give each player two player boards, in opposing colors:

That’s Fire / Earth and Water / Air. Combine them so that the monolith is in the center. Give each player 3 of each of their two dice colors:

Leave the other dice in the central pool.

At this point, you’re about ready. If you’re playing with Avatar Tiles, take only the ones with asterisks and deal them out equally to each player. If there are any left over / any non-asterisked tiles, set them aside, and they will not be used in this game. Note that these are Avatar Tiles:

Once you’ve done all that, you should be ready to go! 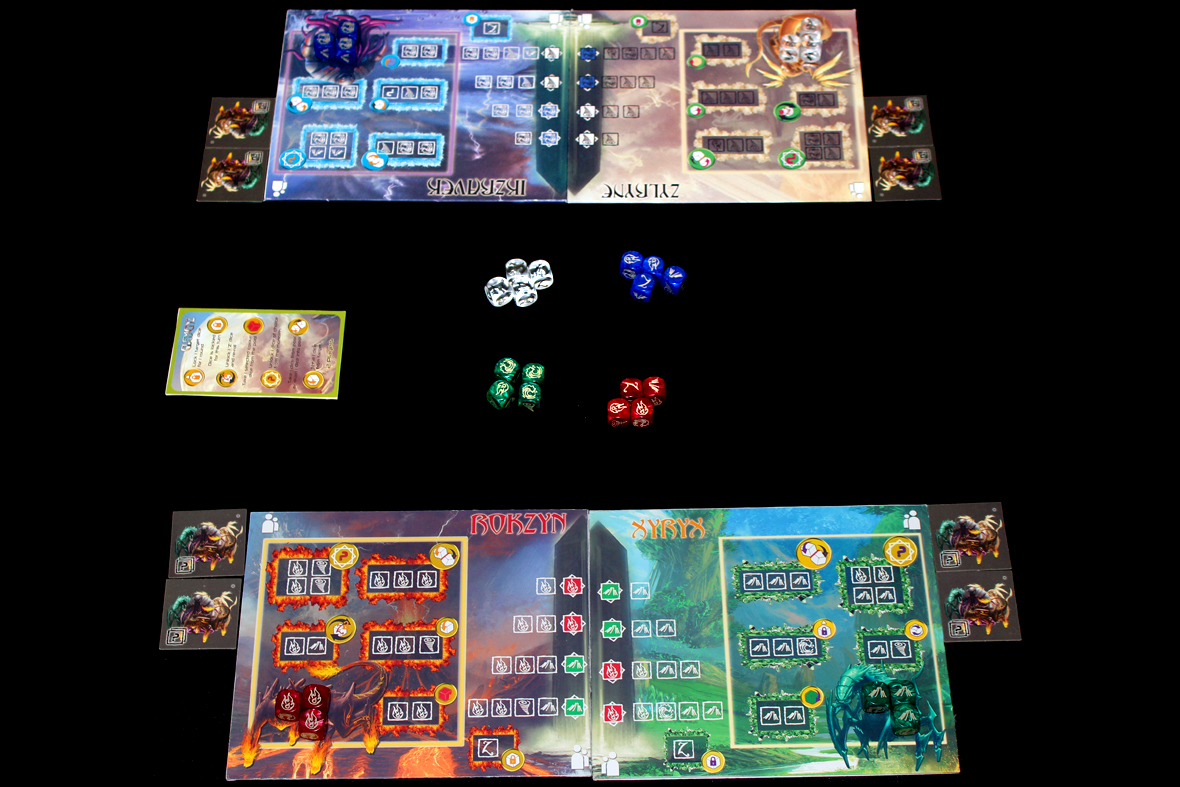 For this one, give each player a Player Board on the three- or four-player side:

Give them a matching Totem Board, as well:

Also give each player 2 Pulse Tokens, which can be put on any of the four open circles on their Player Board, face-down:

And then you’re about ready. If you’re playing with Avatar Tiles, give each player 2, and then put the rest into X equal-sized stacks, where X is the number of players. If the stacks aren’t equal, just … do the best that you can. Again, these are Avatar Tiles:

Once you’ve done that, you’re ready to go! Give the players the dice in their color:

Every player should start with two of their dice with their symbol in their SHIELD section, except for the Earth player who only needs one (they get a second SHIELD die automatically). The third and fourth players get a third SHIELD die. 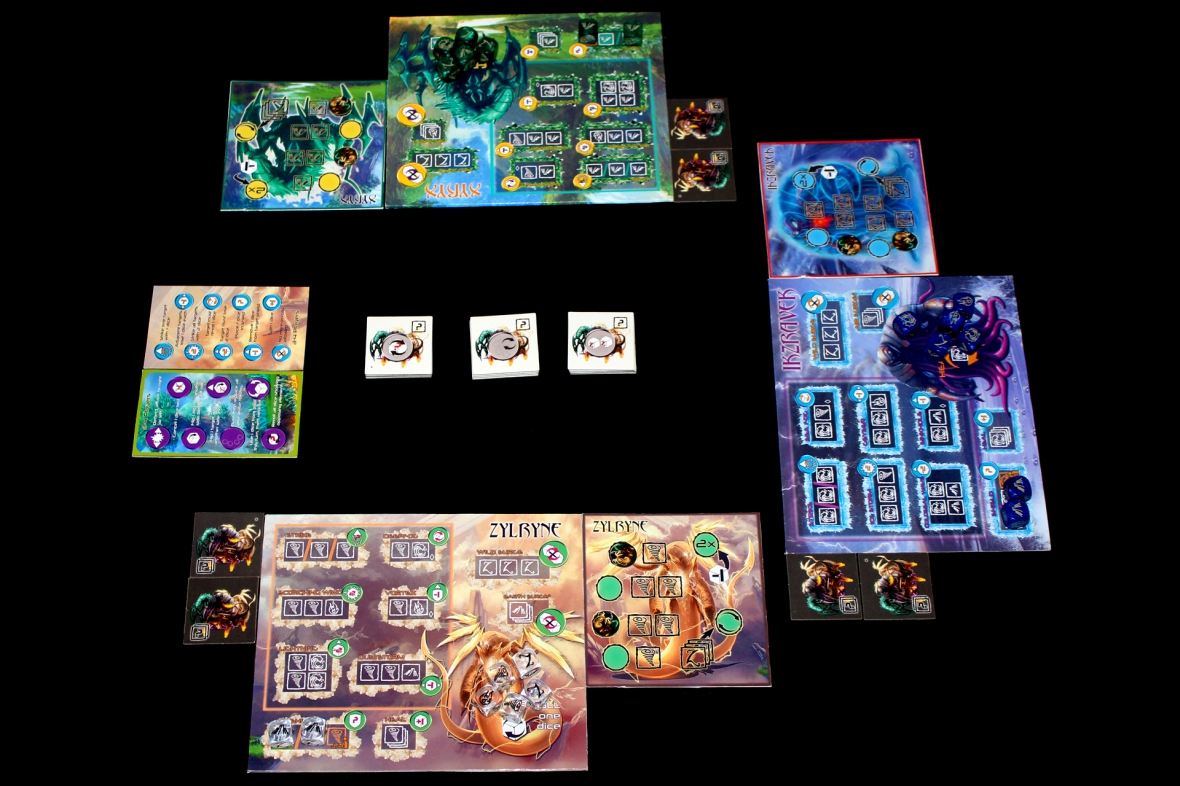 For this mode, you’re trying to power up the monolith that’s just kinda around, and you do this by forming dice combos. Other dice combos will do things like force your opponent to return dice to the central pool, steal dice from your opponent, or gain dice for yourself. There are far too many icons for me to go over them in-depth, here, unfortunately. Here’s how a turn works:

That’s basically all there is to it! First player to lock in all 8 dice activates the Monolith and wins the game! You also win if the other player cannot make any combos on their turn (they’re down to one die).

For this mode, you’re trying to defeat other players who are battling you for control, and you do this by forming dice combos. These dice combos will do things like force your opponent(s) to return dice to the central pool, force them to re-roll dice at inopportune moments, or even weaken their shields. You may be able to heal your lost dice if you’re lucky, but take too many risks and your power might surge out of control or with the wrong polarity and cost you dearly. Again, there are far too many icons for me to go over them in-depth, here, but here’s how a turn works:

That’s basically all there is to it! Last player standing wins!

Well, there are two different games happening, depending on your player count, which is a bit confusing, but within a three- and four-player game there is no real difference other than the “adjacent players lose one die” move being a bit less useful.

Overall, I think ElemenZ is a pretty solid game. I like the need to manage which dice you want to acquire and roll, and which dice you need to sacrifice to accomplish your goal, all the while focusing on your opponent and perhaps needing to take stuff from them. Add in a bit of random luck around bad rolls (and some mitigation opportunities) and variable player powers, and you’ve got yourself a game. The two-player mode is probably my favorite, if I’m being honest, as it’s more of a race / shared-resource-management game with lighter take-that elements. The three- and four-player modes are solid if you’re into the randomized combat genre, but I understand that it’s not for everyone. What fans of the genre will find is a game focused on going for certain combos and compromising at times to at least move forward or defend yourself from being moved backwards by others. I would definitely recommend this to fans of the genre, and even moreso once it’s been polished up a bit. That said, if you dislike combat or randomness or take-that in games, those are all sort of core tenets, here, so buyer beware.