Full disclosure: A preview copy of Mint Delivery was provided by Five24 Labs. Some aspects of the game are subject to change, so please keep that in mind, as this is a preview of a currently unpublished game.

Hey, I’m actually doing Kickstarter previews again! I took a short hiatus and am still kind of out of it, so, that happened. Either way that’s just my life and not really part of the reason that you’re reading, so let’s just move onto the game.

Mint Delivery takes place after you’ve made all the mints. You load them up into the mint … trucks, and you go! There are all kinds of places you need to deliver orders to (and from), and you better be efficient if you’re going to make Employee of the Month, because your coworkers are competing with you for that prestigious honor. Will you just keep trucking along to success? Or will someone else get the closest parking spot to work next month?

So the game’s pretty simple to set up. There are mints of three types: White Classic, Green Sugar-Free, and Red Cinnamon:

Set those aside. Next, give each player a truck of their color:

Also, give them a corresponding Truck Card:

Then set up the map, putting all the trucks in Mintopia City:

Now, give each player 4 Classic Mints for their truck and 3 Order cards:

You’re only allowed to keep Order cards such that you have 6 or fewer stars between your Orders. Return ones you don’t want to keep to the deck, which is then shuffled. Make four piles of 7, and put them near each of the cities on the corners of the map, and then flip two over.

Once you’ve done all that, pick a starting player and you’re ready to begin! 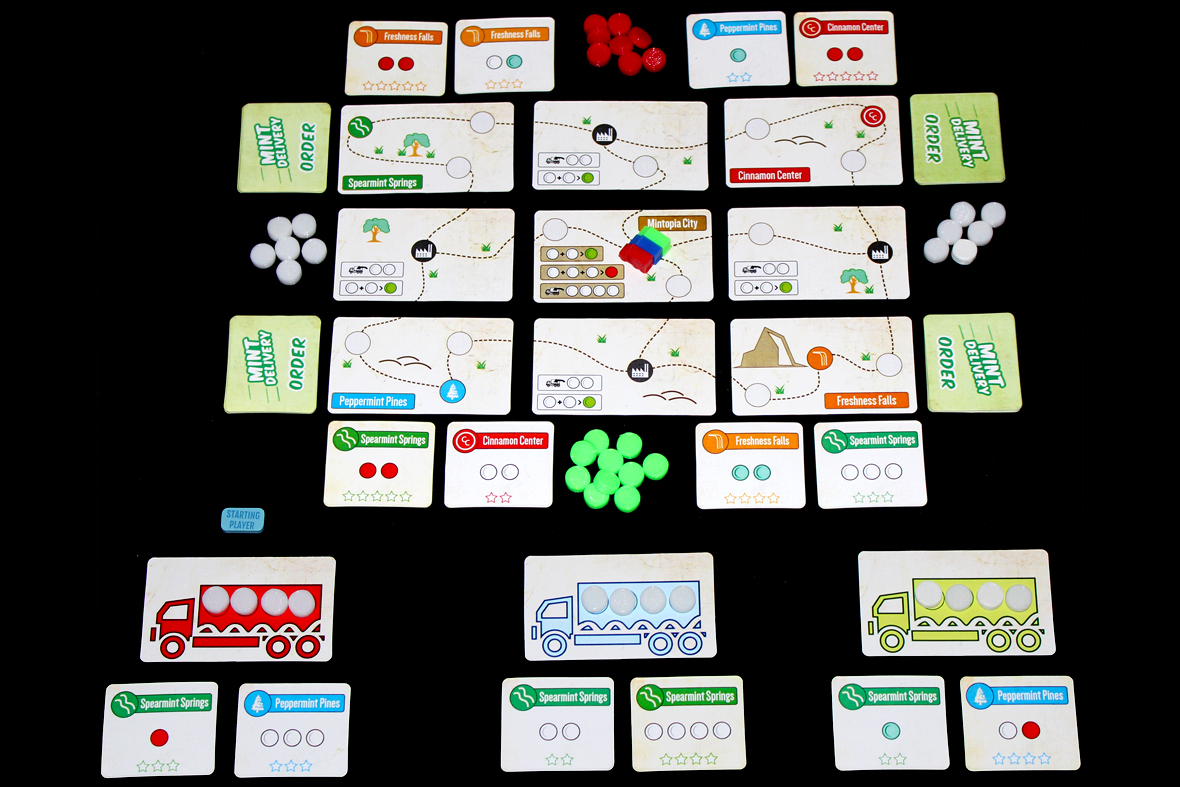 Mint Delivery is played over a series of turns in which you attempt to pick up and deliver mint orders to and from cities and warehouses. On your turn, you can perform any two of the following actions (and you may repeat the same action twice):

Once you’ve done that, it’s the next player’s turn! Play continues until either:

If either of those things happen, the game ends at the end of the round (before the Starting Player gets another turn). At that point, reveal all your completed orders. The player with the most points wins!

I mean, at two there’s the whole kinda-aggressive order discarding thing, which is kinda cool. I haven’t tried it at 5, but I imagine it slows down a bit. The nice thing is that generally, other than contention around getting orders, the game happens pretty independently of other players. I wouldn’t say that it’s particularly different at any player counts, other than a bit more aggressive at two. That said, I think it’s useful, otherwise you’re kind of relying on luck of the draw.

Overall, Mint Delivery is solid! It makes me want to pick up Mint Works and try it, since it’s part of a design theme of “games in mint containers”. I think it’s really cool how they’re solid examples of their mechanic but packaged in an easily-transported and easily-understood game. It really speaks to the skill of the designer, and the art / graphic design / etc. are all fun and whimsical, so that’s also a good extra boon. I’d say it’s definitely worth checking out, and it’ll probably stay in my Quiver / other game storage solution for a while, yet.