So, uh, maybe you should move out of town. You’ve dealt with Werewolves, (and even MORE Werewolves), you ran into some Vampires, and now, well, Aliens. They’re here for something (probably your livestock), but you should probably stop them. Problem is, they’ve got some weird tech that makes it a little bit difficult to predict their actions (and can even bend space and time). Will you be able to fight off these invaders?

So, setup works exactly the same way as the other One Night games, with one caveat. You should give every player one of these Player Number tokens, in order: 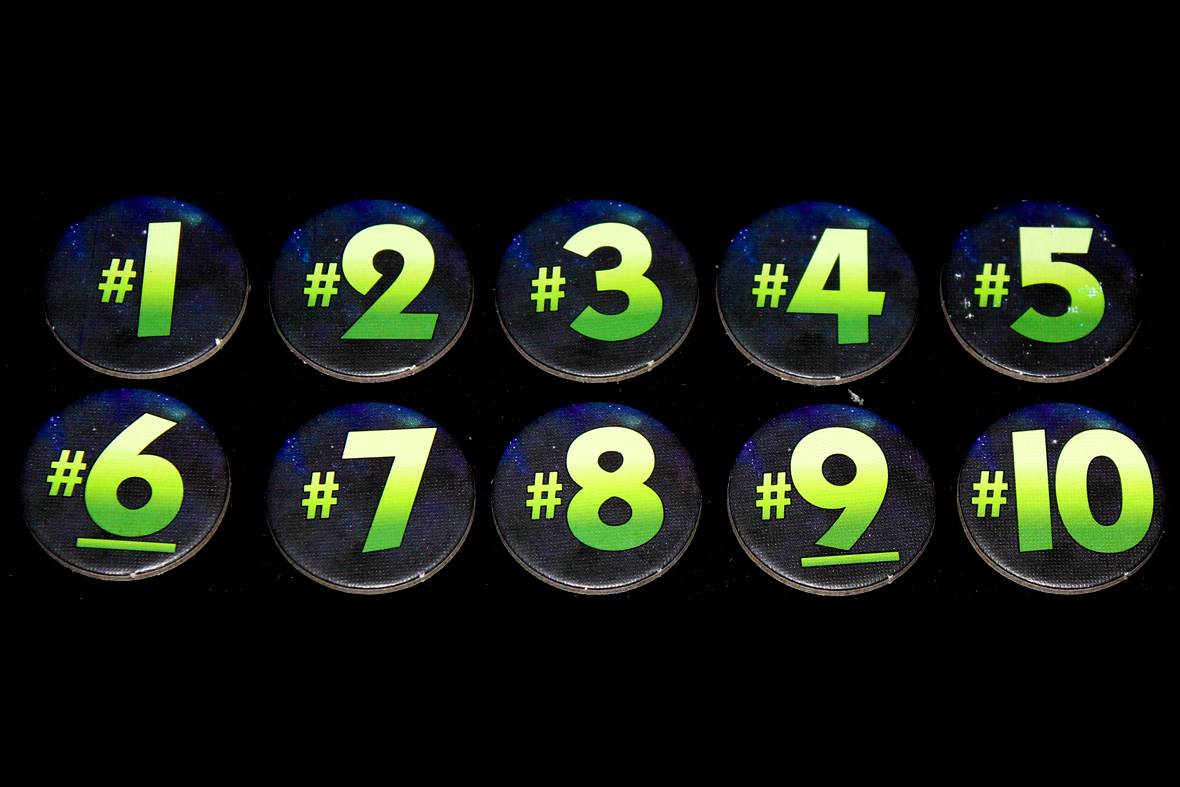 You’ll want those for later. Next, pick some roles:

And take the corresponding role tokens:

Setting them aside as needed. Make sure you take three more roles than players so you can have three in the center, and you’re about ready to start! 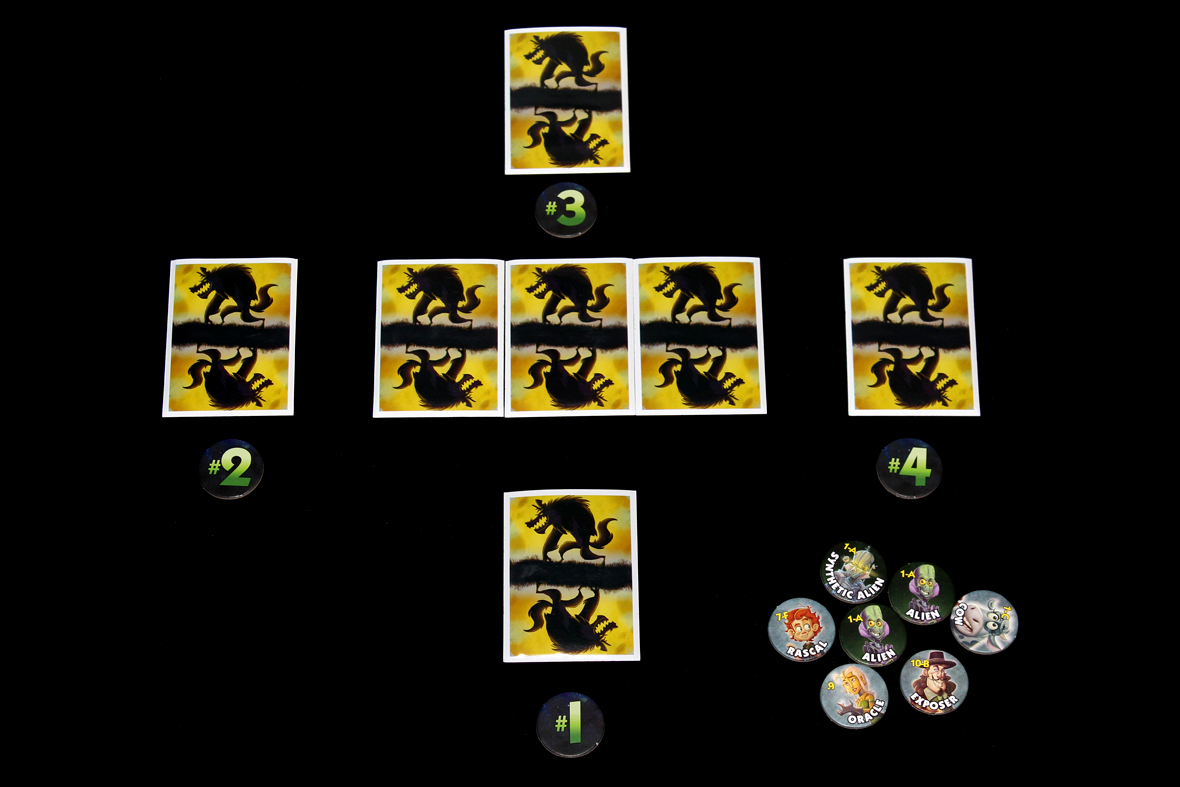 So, like the other One Night games, there’s a Night phase, in which some players will wake up and perform a special action. Then, there’s a Day phase, in which players try to reconstruct the night (along with other players, who may just be lying).

The Night Phase proceeds in role number order, where the role tokens have numbers that indicate the order in which they wake up (starting with -9 and going up to ~13ish. There may also be letters on your token, indicating that you should wake up after roles with letters earlier in the alphabet than yours. If you have no role number, generally, you do not wake up. You just go to sleep at Night and wake up in the Day. In order to make this process of roles and sleeping and waking up move smoothly, you must download the One Night App, as Alien requires some randomization elements that you cannot effectively emulate. So just download the app. The app will handle the Dusk (if playing with Vampire) and Night and set a timer for the Day, but it might also cause what’s called a Ripple. These space-time ripples are caused by weird Alien stuff and might cause a variety of strange effects to occur. I’d highly recommend them.

As usual, it might be beneficial to go through each role quickly and explain what they do. I’ll go in order of how the roles wake up and provide a brief rundown of each of the roles. Please note again that your action during the night is the role you started as, not any role you might have changed to. Also do not look at your card again when the night begins unless your action allows you to do so or you are told to do so by the game.

The Oracle has gained a lot of fame and admiration around the Village for her ability to commune with the forces that control reality itself. At least, when they’re feeling helpful. During the Night, the app (yes, you read that correctly) will ask the Oracle a question. The Oracle must tap their answer and await further instruction (answer truthfully). If the Oracle waits too long or is not present (in the center, for instance), the app will choose an answer for the Oracle. That … might not be what you want.

So this includes all Alien team members (Alien, Synthetic Alien, Groob, Zerb, the Body Snatcher). They wake up, see each other, and then are given instructions via the app. This may involve making another player an Alien (or Alien Minion), looking at someone’s card, or even trading their own cards. Note that if the Aliens make you an Alien, you stay an Alien, regardless of what your card is. Good luck with that.

Just when you thought you were done playing Fallout 4, another Synth shows up. This Synthetic Alien appears to be an Alien to everyone else, but they’re not. They are a convincing (ish) replica. However, they have self-awareness and realize their technology is too powerful to be in any team’s hands. Therefore, the Synthetic Alien only wins if they are killed. Yup, just like the Tanner, but this one’s a member of the Alien team.

Well, you figured it out. The Aliens are here for your cows. Naturally, one of them is not in the moooooood to be taken (in fact, they’re udderly against it), so they’re gonna help you out. The Cow puts out their fist on their turn and, if they are sitting next to an Alien, one member of Team Alien must “tip” the cow (heh, though it’s the rulebook’s joke) by tapping their fist. The Cow should not know where the tip came from, so they don’t know which of the adjacent players started as an Alien.

Groob and Zerb are two Aliens that are definitely 100% down with the Alien cause, but they hate each other. So much that it makes it hard to focus on their work. Naturally, as you’d suspect, they have a plan. If both Groob and Zerb are in the game, Groob only wins if Zerb dies and Groob lives, and Zerb only wins if Groob dies and Zerb lives. Naturally. If only one of them are in play, well, then they’re just regular Aliens.

The only ruffle with this? When they wake up, they see each other. Good luck with that.

So I heard you liked The Resistance: Avalon, so we gave you a Merlin. The Leader wakes up and all Alien team members put their thumbs up (and keep their eyes closed). If both Zerb and Groob are in the game, they point at each other instead of keeping their thumbs up.

If Zerb and Groob are not in the game, the Leader is on the Village Team, in that they win if an Alien is killed. However, if all Aliens then correctly point to the Leader, the Alien team wins! I personally think that’s better than Avalon’s take on it, but your mileage may vary.

The Psychic can tap into the same forces as the Oracle in order to see people’s true natures. When she wakes up, the app will tell her to look at certain players’ cards. Which cards and how many will vary from game to game. The Psychic is on the Village Team.

The Rascal is essentially an app-driven fusion of the Robber, Troublemaker, Witch, and / or Drunk. They wake up, and the app directs them to swap some cards around. Maybe their own; maybe someone else’s; maybe certain players based on their player numbers. The Rascal is on the Village Team.

Not that kind of Exposer.

Anyways, the Exposer wakes up and flips one, two, or three center cards (I disabled three; it’s just too much information) as directed by the app. The Exposer is on the Village Team.

The Blob … might be my favorite? They’re on their own team. The app tells them that they have subsumed X players into the Blob (where those players are either on their right or left side). They now only win if those players do not die. So, good luck convincing the Blob to kill an Alien that’s in its protective ooze.

Note that if the Blob card moves around, different players become part of the Blob, and the Blob only wins if nobody in the newly defined Blob dies.

I wish I were as lazy about my job as this guy. The Mortician makes money from dead people, but like, doesn’t want to have to go and get someone to put in the coffin. It’d be much more convenient for you to just kill one of his neighbors.

If it helps, he’s been spying on them.

Again, you might mix some roles with the One Night Ultimate Werewolf or Daybreak or Vampire sets. If you are planning to do that, that’s fine, but if you’re using the Doppleganger, just note that Doppleganger is going to continue to make things weird. Just listen closely to the app.

So that’s all the roles. Again, during the Night every player should keep their eyes closed until it’s their turn to open them (if they wake up at all). Some additional suggestions during the phases:

After all that, the Day begins! Again, this is where players try to figure out both what happened and who is now an Alien. If anyone refers to enjoying having human skin, just like normal humans, they might be an Alien. You know what team you started on, so try to figure out what team you’re on now, and then either lie or tell the truth or debate someone or yell until you get your way or whatever. Whatever gets someone on the team you want killed killed, works. I’ll talk more about ways to do that in Strategy.

After time runs out, all players vote on a countdown from three (basically every player votes simultaneously), and whoever gets the most votes is killed (barring a tie, in which each player with the most votes dies). If an Alien is killed, the Village Team wins, if a villager is killed, the Alien Team wins, if the Synthetic Alien dies, they win, and then you have to consider the Blob and Mortician and whatever else you added.

If you really, unequivocally want to go all-out on this, you can also mix in Werewolves and Vampires from the previous One Night series games in order to have an epic battle of Werewolves v. Vampires v. Aliens v. Villagers. If you do that, play normally, but Villagers only win if they kill two of the Werewolf, Alien, or Vampire team. Werewolves, Vampires, and Aliens win if they live and a member of two of the three other major teams dies. It’s complex.

As with Vampire, you have handy tokens:

You give those to the players who got the most and the second-most votes during the night. Both players are eliminated, unless there is, by some weird providence, only one “bad” team in play. Then, you’re not having an Epic Battle, so you kill just one player. 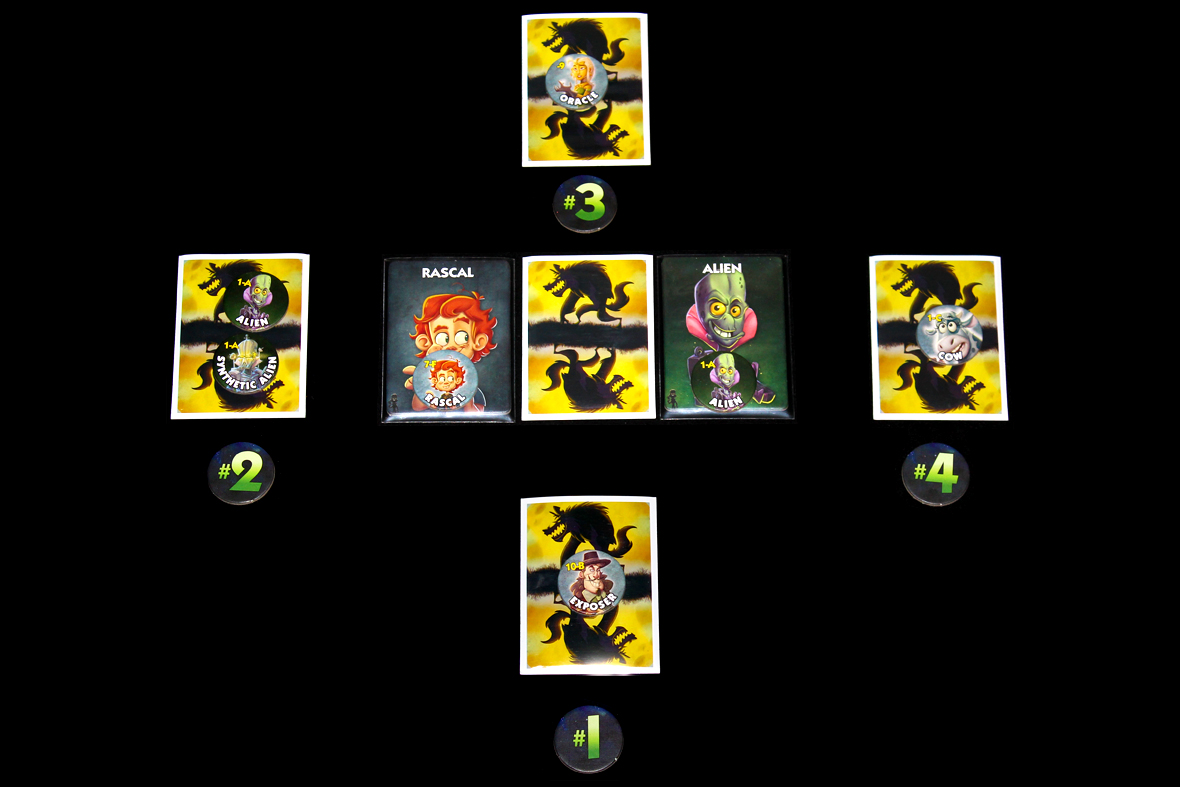 Overall, I’m conflicted. Like I said, there are a bunch of things I don’t like about this expansion, but my primary complaint is I feel like they’re missing another character who can move cards around. This just makes it end up feeling chaotic and high-entropy, but ultimately all the games I’ve played (with a variety of roles) have felt pretty solved. Perhaps that’s just bad luck with the app, but it’s difficult to rely on a fairly randomized app for the entire game, as you’re likely to get some … mishaps. Which is totally fine! Where I think this shines is by adding some cool roles and some awesome entropy to your mixed sets of games. I personally love many of those roles included in this set and I have already mixed it with Vampire to great success. I’m looking forward to seeing what happens when I mix it in with my standard One Night set. So while I wouldn’t recommend it as your first set, it’s definitely a better “expansion” purchase than Vampire, which is more of a standalone. I think that the One Night series functions a lot like the Lost Legacy series in that sense — some decks are better mixed together, some decks are better played separately, but the whole game series just works. And Alien is no exception to that rule.