Has it always been your dream to build a working factory? …no? Well, get better dreams, because Factory Funner is here to do just that. In a game that is provably 50% more fun than its predecessor, Factory Fun, Factory Funner ups the ante by moving from square tiles to hexes, giving you at least 2 new ways to make long-lasting mistakes in short-term factory construction. Will you be able to build the funnest factory? Or is all that just a pipe dream?

Setup! So, there are a bunch of Factory Boards, each with an A side (left) and a numbered B side (right): 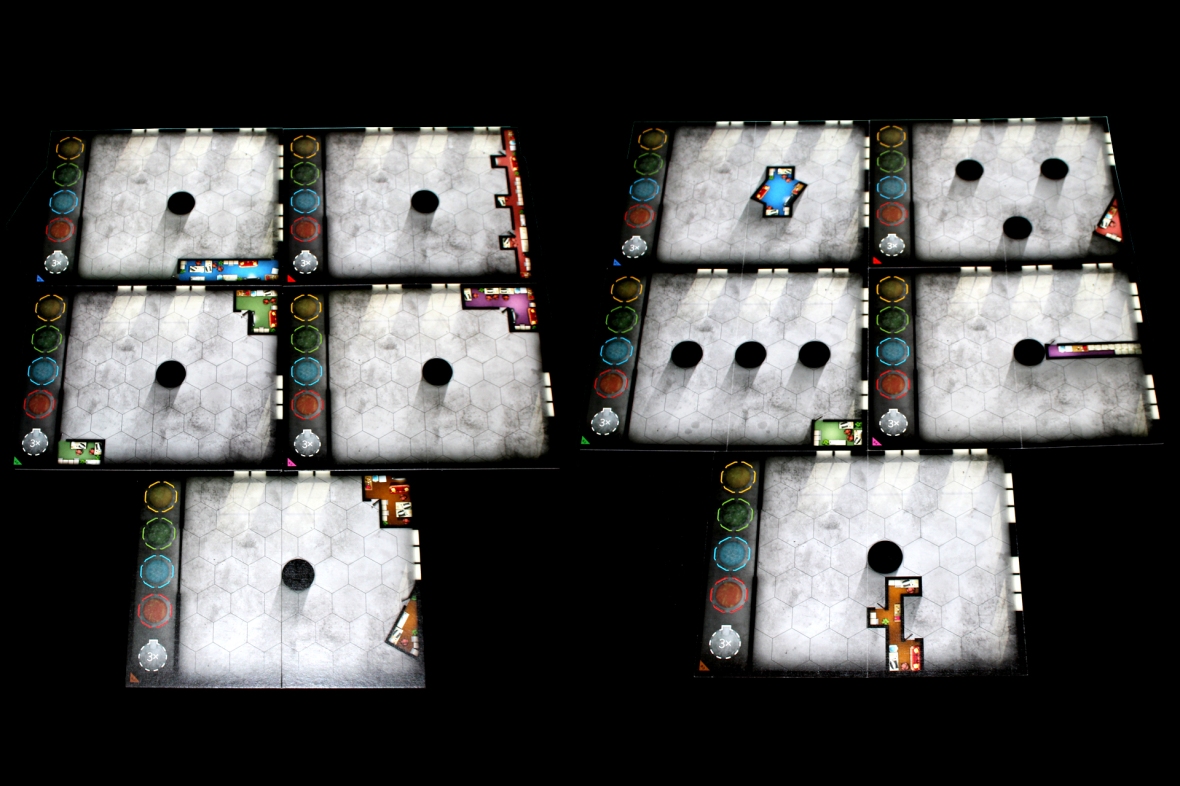 These are a measure of the rough difficulty of the board, going from 0 (lowest) to 5 (highest). Give each player one in the color of their choice, unless you’re playing with an experienced player, in which case they should take whatever number they feel most comfortable with.

Next, give each player a starting set of four reactors (technically called supply reservoirs, but this is how I explain the game) and three output reservoirs: 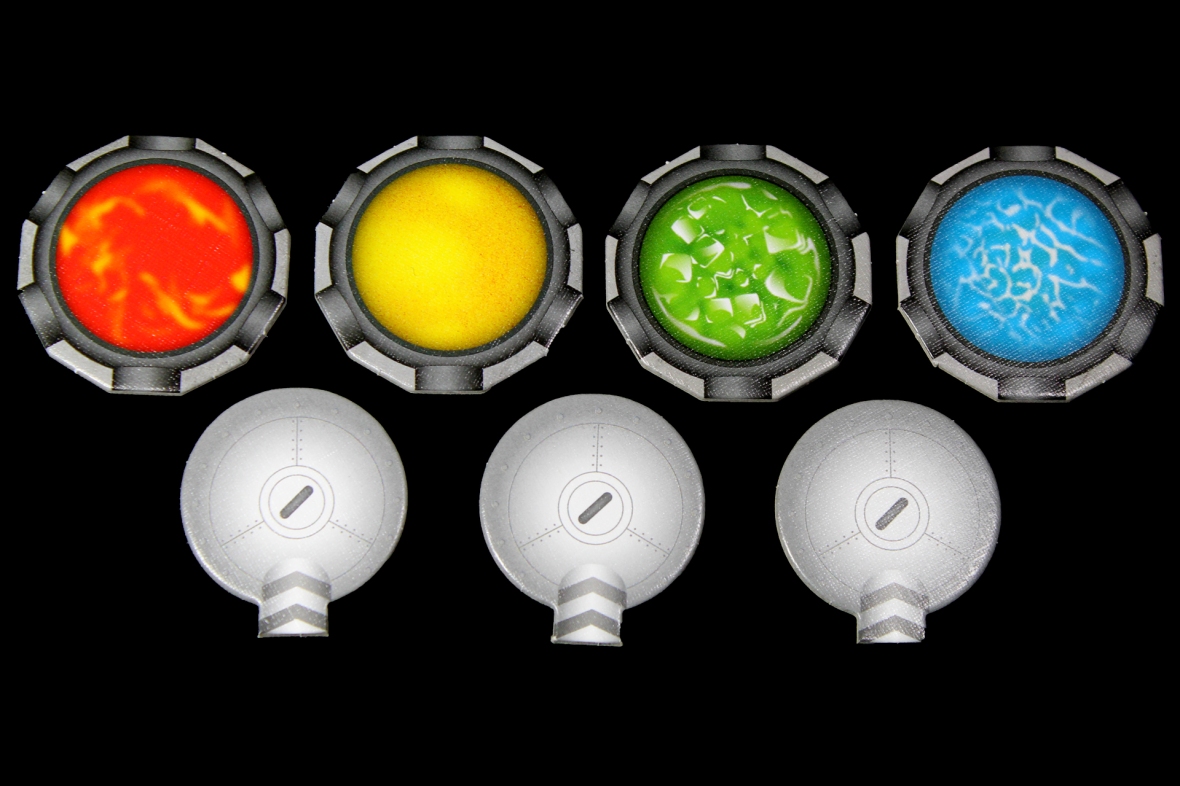 And put the money marker in each player’s color on the 1 mark on the money board. You’ll also put in the +1 and -1 tokens, unless you’re playing a two-player game (no -1) or a solo game (don’t use either).

Next, shuffle the machines and give each player eight, face-down:

If you’re feeling like doing this right, it’s usually best to have trays or bowls for these sorts of things.

And once you’ve done all that, you should be about ready to start!

Gameplay is pretty interesting, since it has a real-time component (sort of like Millennium Blades), but it’s more of a puzzle game than anything else. So, on a given turn, everyone will flip the top machine of their stack into the center at the same time: 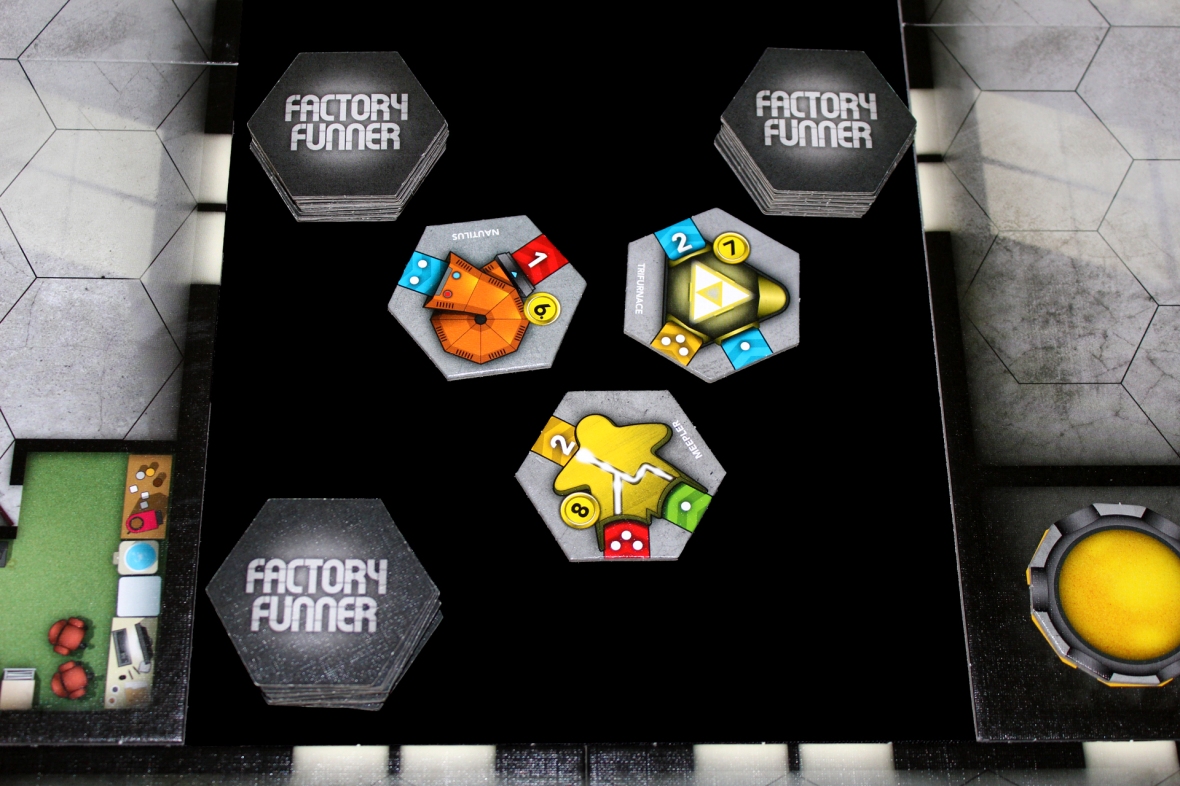 And then each person can grab a machine with the following caveats:

Once every player has taken a machine (or every player but the last player), you can try to put the machine onto your board.

And that’s the hard part.

So, take a look at a machine: 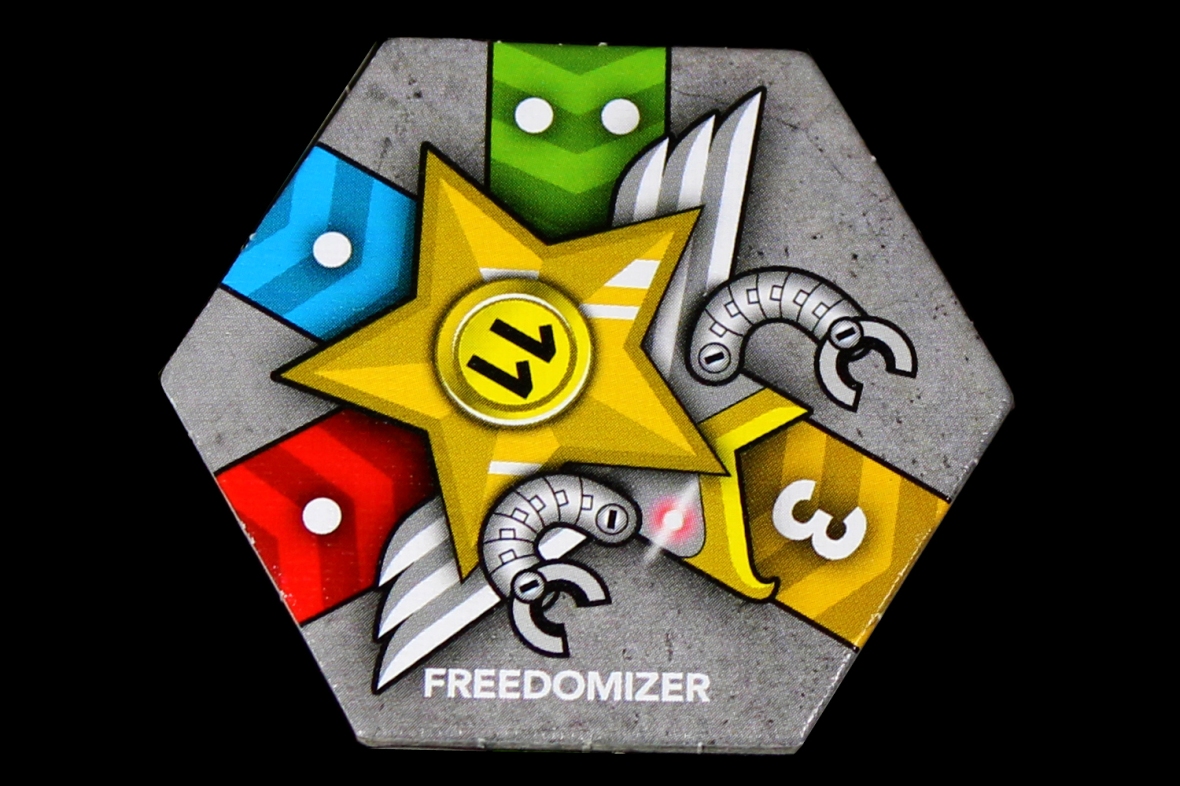 Of course I would pick the Freedomizer.

This machine has some pips (input) and some number (output). This is how a machine works — it requires that much “energy” as input and produces the number of that color energy as output. In order to make this work, it’ll need power. Thankfully, your reactors produce unlimited power of that color, you just need to get the power there. That’s where the pipes come in! You can use them to pipe input (or output) wherever, provided a few rules:

Finally, the system must be closed. You can’t have excess energy leaking out of pipes that don’t connect to anything! To do this, you’ll either have to place reservoirs to hold output energy or pipe output to be the input for other machines. As you might imagine, a machine cannot power itself or power itself via a chain of machines. That’s magic, not science. If you power a machine with another machine (not a reactor), put a clear plastic token on its input pips; it’ll be worth end-game points (specifically, three points per pip on the input). If you change that configuration, though, you may have to remove the pip. If the machine has a black output, that’s referred to as end product, which gets its own special reservoir; you’ll follow normal placement rules for setting it into your factory.

The cool thing about pipes is that you can use them to combine or separate outputs, with the following caveats:

Now once you’ve laid pipes and such, count how many pipes and reservoirs (don’t include your machine) you laid this turn. For each pipe and reservoir (counting reactors as reservoirs), you lose 1 money. Note that this can cause you to go negative on the turn, but you cannot go below 1 money. If that were to happen, you would just not be able to place the machine. Removing things costs no money, but placing things costs 1 per placement. So if we look at this example:

They added 5 pipes and a single reservoir when they placed the Boom Tube, so they spend 6 money, but the machine generates 7 money, so they add the difference (1) to their score on the money board. If you find that you can’t make the machine work, you may discard it for a -2 penalty. You score -2 points on the turn, rather than being able to score anything normally. This penalty can only be avoided if you are the only player who hasn’t taken a machine and there’s one left. In that case, you do not have to place the machine, but you forego the +1 bonus, too.

Keep playing until all players have used the 8 machines in their machine stack, and then tally scores! Add in 3 points per pip for each input that you’ve chained another machine’s output to (so a three-pip spot would generate an extra 9 points) and then the player with the most points wins!

This is an interesting game, because I generally feel like it gets easier as you add more players. With more players, you see more machines each round, so you’re more likely to be able to snatch something you want. In a solo game, on the other hand, you’re just stuck making the best of the machines you get. Sure, you run some risk of getting the machines you want stolen (which would make you essentially get the worst of five random machines, which can be pretty bad), but you also can reject a machine you don’t want if you’re the last to pick, so it’s fine.

I can’t say I really love the solo game for that reason — I’d much rather flip two machines each round and then pick one. With only one, you feel extremely locked-in. That said, it’s a pretty tough puzzle in the solo mode, so it might be right up your alley.

Man, Factory Funner is awesome. I love the quick puzzley gameplay, I love the whimsical nature of the pieces, and honestly I love the concept. I picked it up after playing it even though I got ruined the first time, and I’m always interested in playing another game once I’ve played it to try and get a better sense of how I could have done better. It’s a super interesting concept, sure, but the delivery is more than I could have hoped for. I made a terrible mistake missing out on the Kickstarter (and thankfully managed to pick it up on eBay), but hopefully enough buzz will be generated for them to consider a second print run? If they do, I’d highly recommend it. It’s really, just, great.