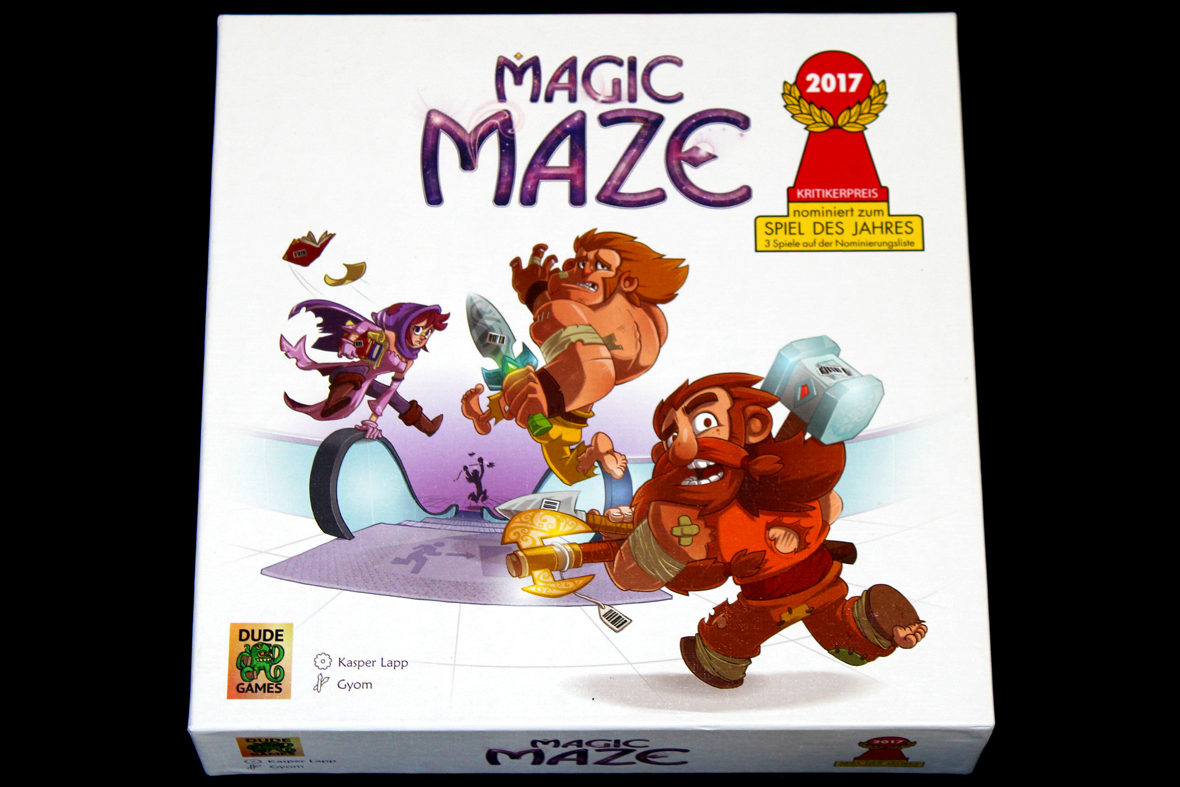 Well, I’ve already covered last year’s SdJ winner (Kingdomino) another nominee (The Quest for El Dorado), and the kid’s SdJ (Ice Cool); makes sense that I should probably round out the SdJ nominees and talk about Magic Maze. I also enjoy real-time and cooperative games, so it follows logically that this might be a good game to talk about.

In Magic Maze, you control a party of adventurers that have met with unfortunate circumstances. They lost a huge battle, and along with that, they lost all of their money and equipment. They have since wound up at the Magic Maze (a local fantasy shopping mall) to get new equipment for their next adventure, but have no money. They’ve decided to help themselves to new equipment via the storied five-finger discount. The problem is, they don’t really know the mall that well, and they’ll need to abscond with their ill-gotten gains. Can you escape the Magic Maze?

So, to setup, you’ll probably want to place the Start tile in the center:

Once you’ve done that, shuffle the other tiles into a stack and place them face-down. For your first scenario, this should be tiles 2 – 9: 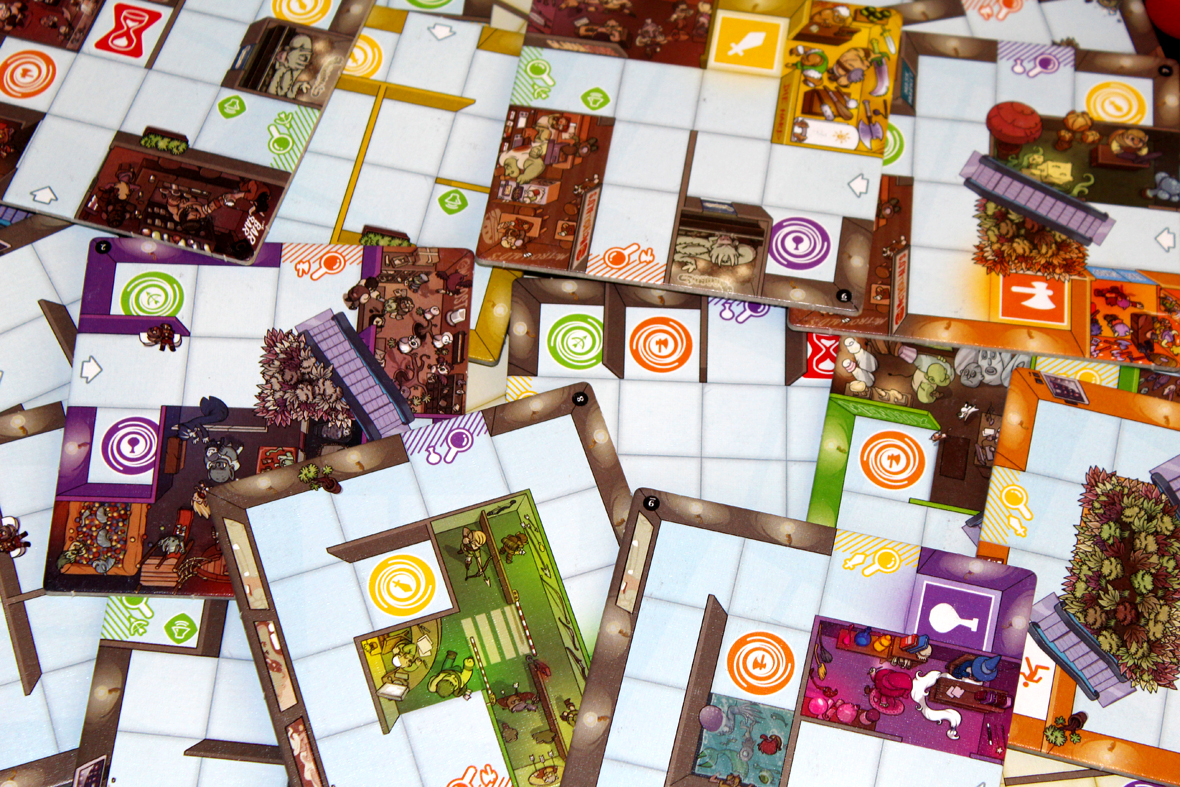 Now, take the four Pawns and set them on the center of the start tile: 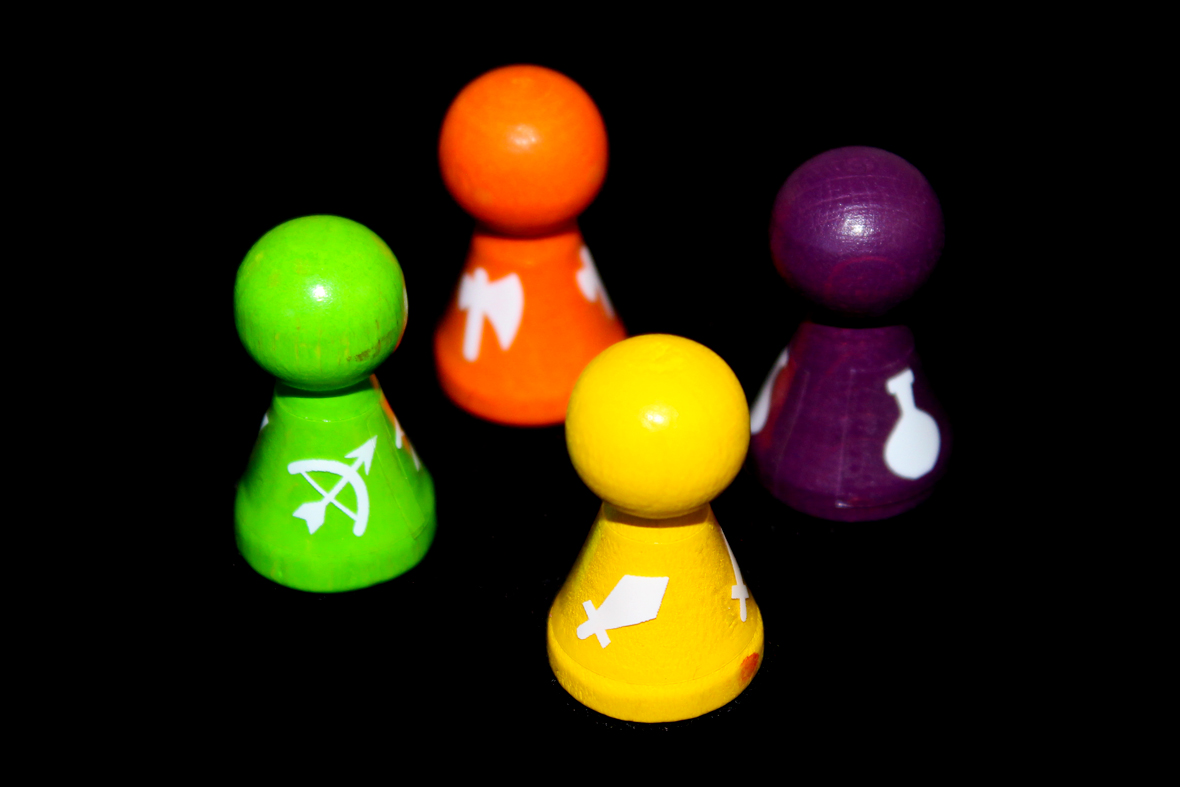 You might notice another pawn that’s slightly larger than the rest: 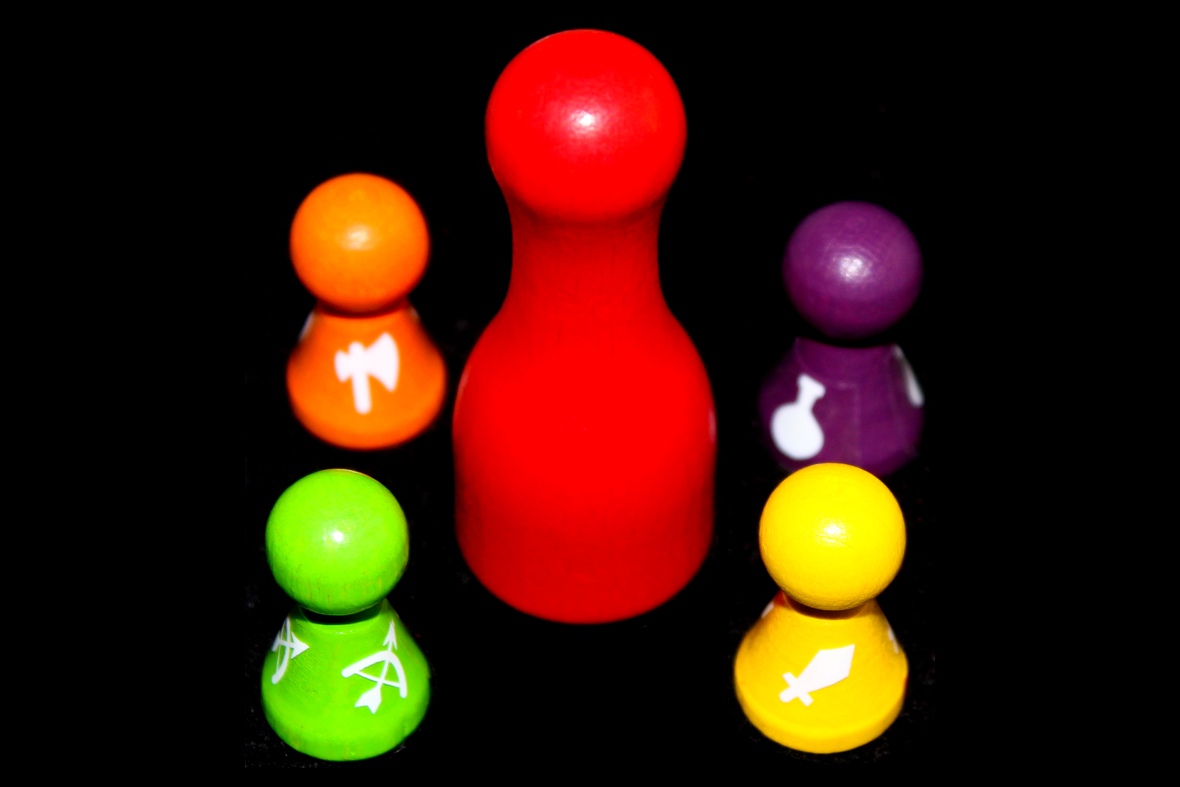 Slightly. That’s called the Do Something pawn, and we’ll be using it later. You might also notice that the pawns pictured have stickers on them and the normal pawns do not. You should apply the stickers to the pawns to help make them easier for players with an altered color perception. Next, get out the Timer: 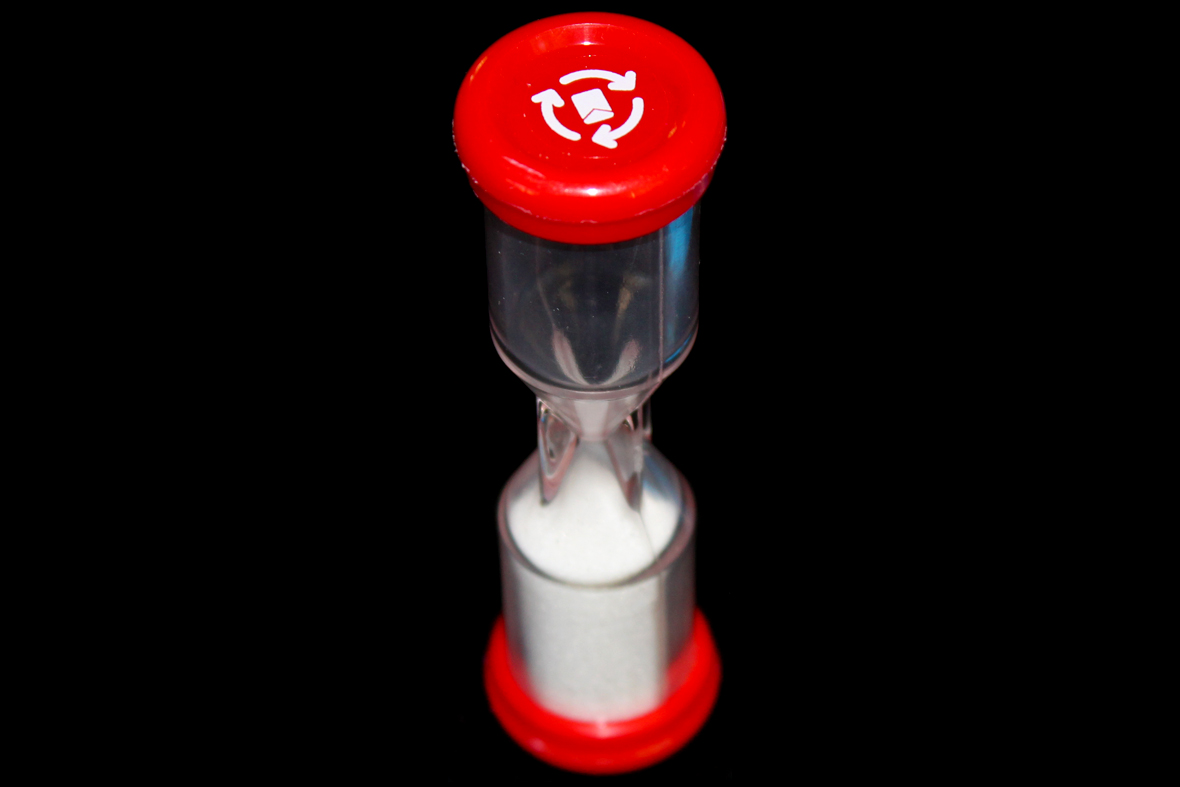 There’s a sticker that goes on both sides of the timer, as well, but you don’t have to do that, yet, unless you want to be thorough. Set aside the Out of Order tokens: 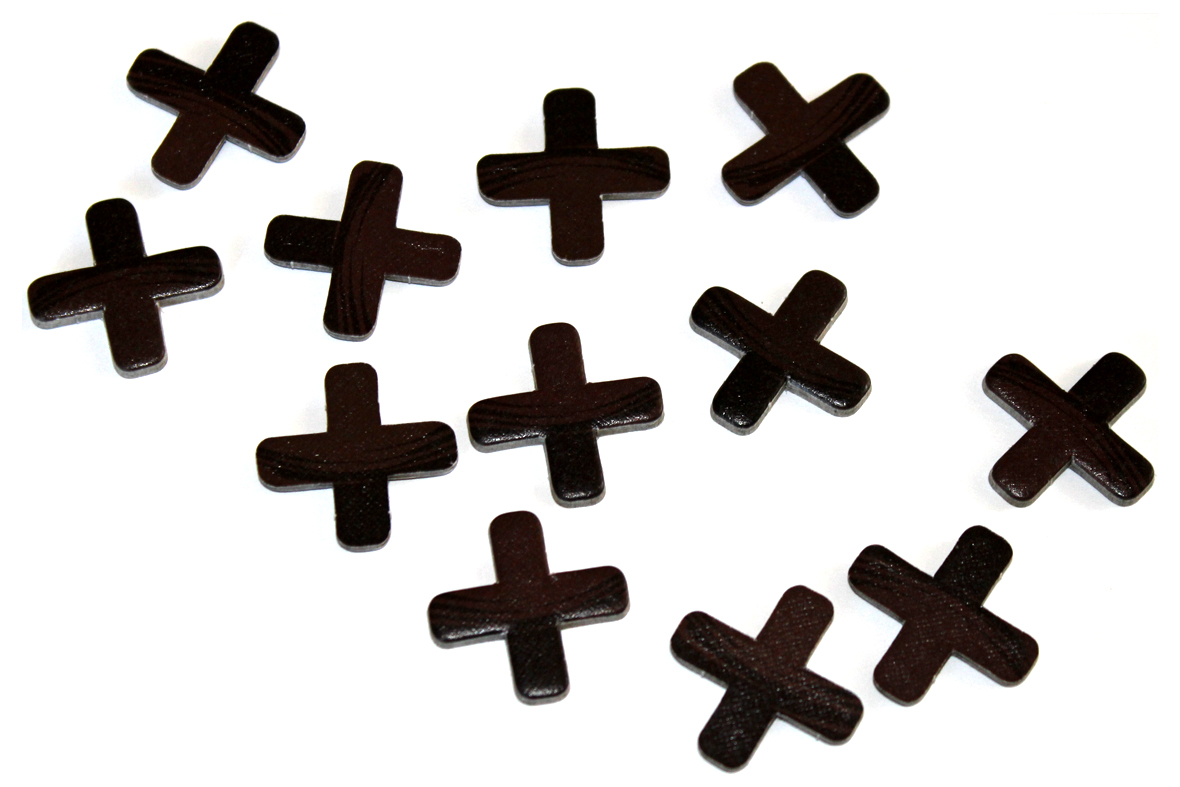 Won’t need those until later, so I’ll explain them, then. Lastly, you’ll want to use the appropriate Action Tiles for your player count: 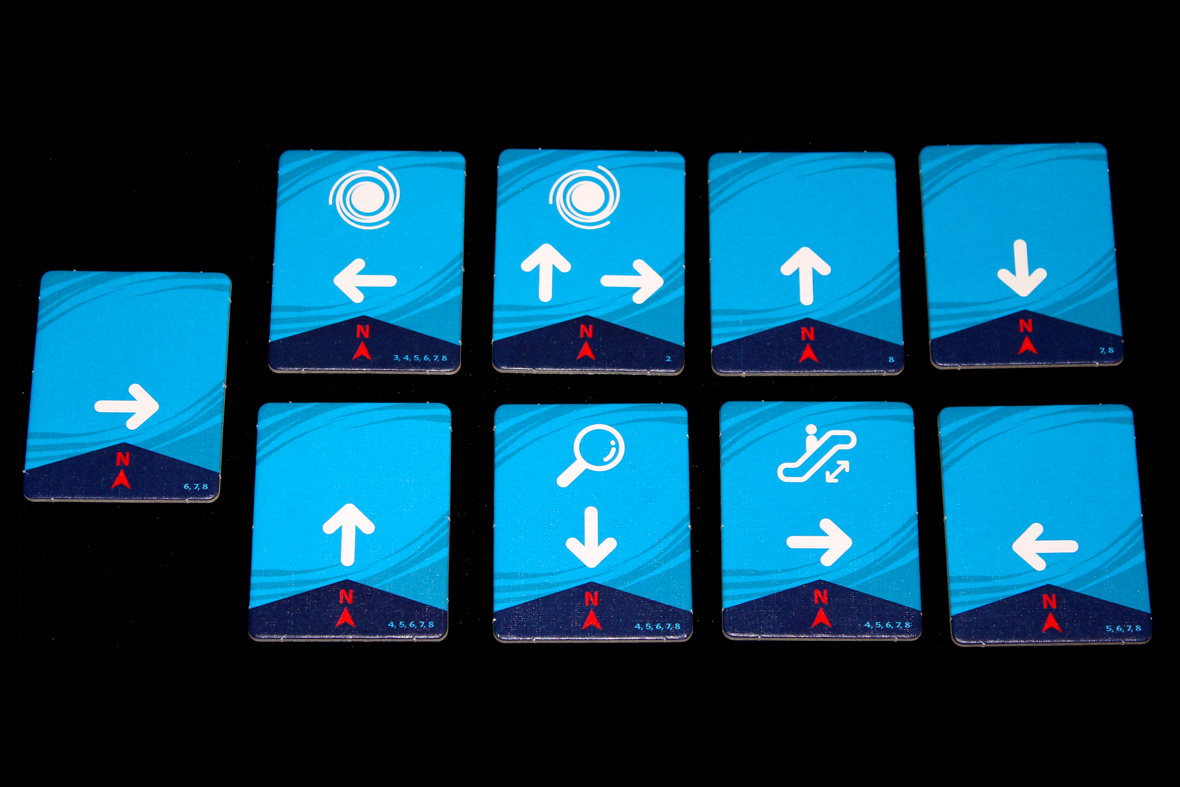 As you can see in the photo, each Action tile has a set of numbers in the bottom-right corner; these numbers indicate which player counts you use that tile for. Give each player a tile (I’ll explain what the tiles do later), and have players with tiles with the same symbol sit across the table from each other, rather than adjacent. It’ll make sense later. If you’re playing Solo, you’ll want to set out the Solo Action tiles, instead, and shuffle them into a stack: 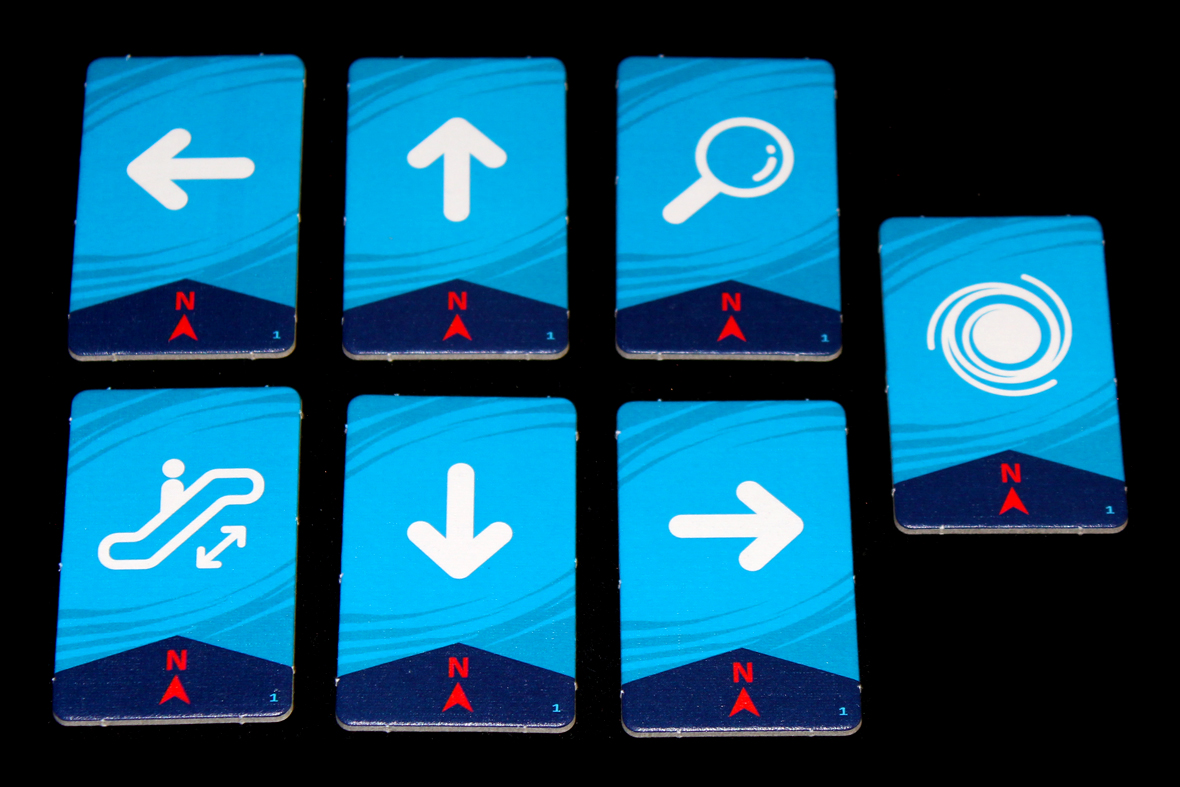 Also set out the Heist Tile: 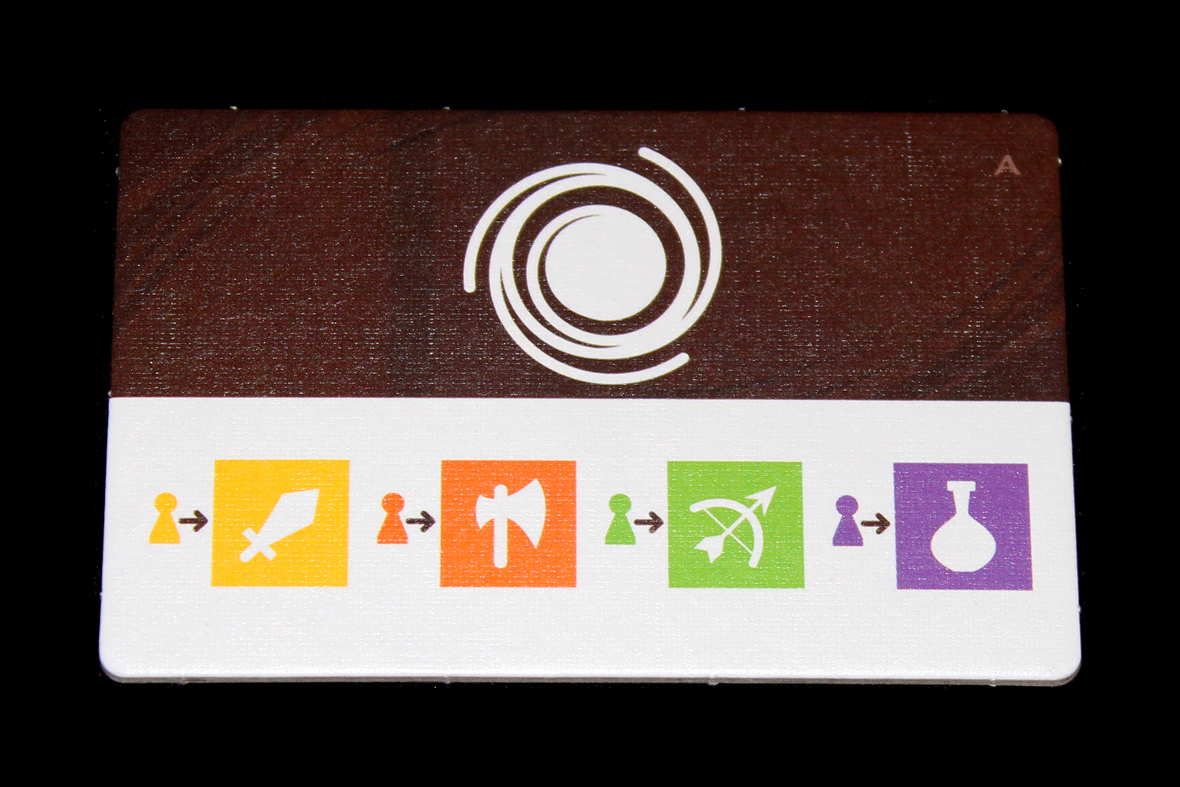 Once you’ve done all that, you’re basically ready to start! 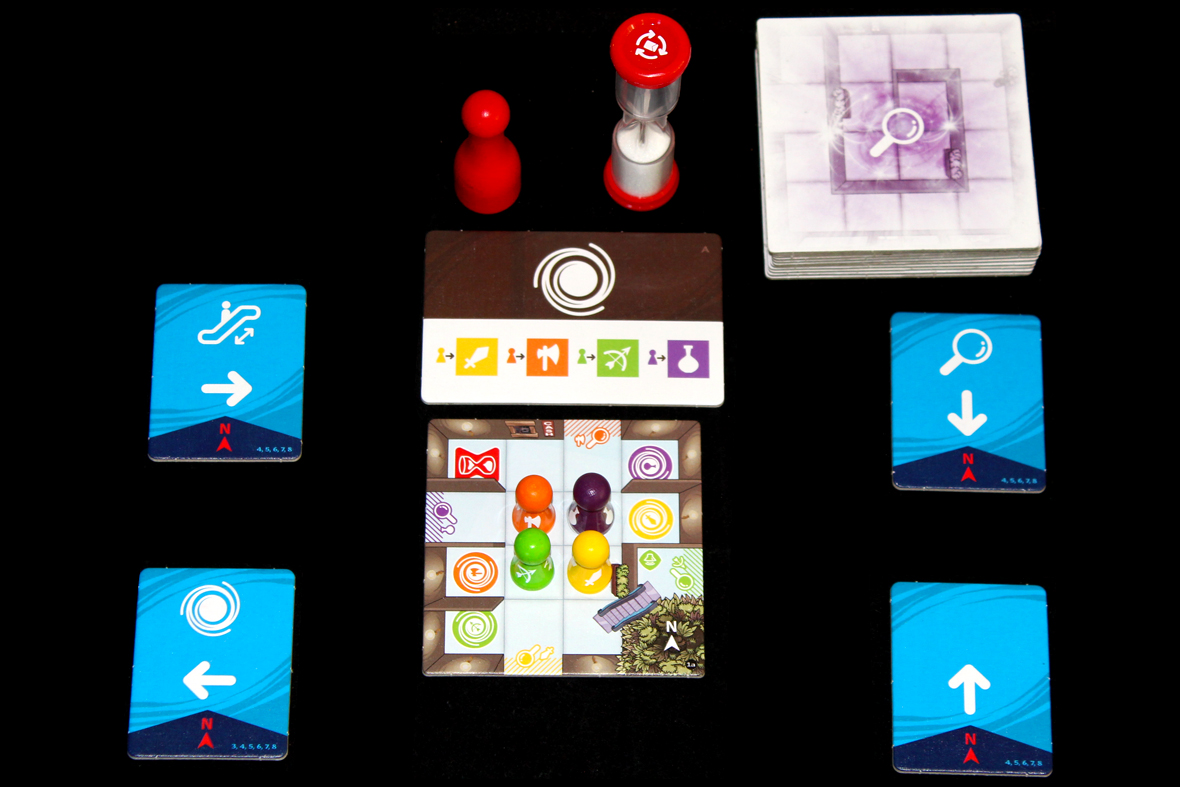 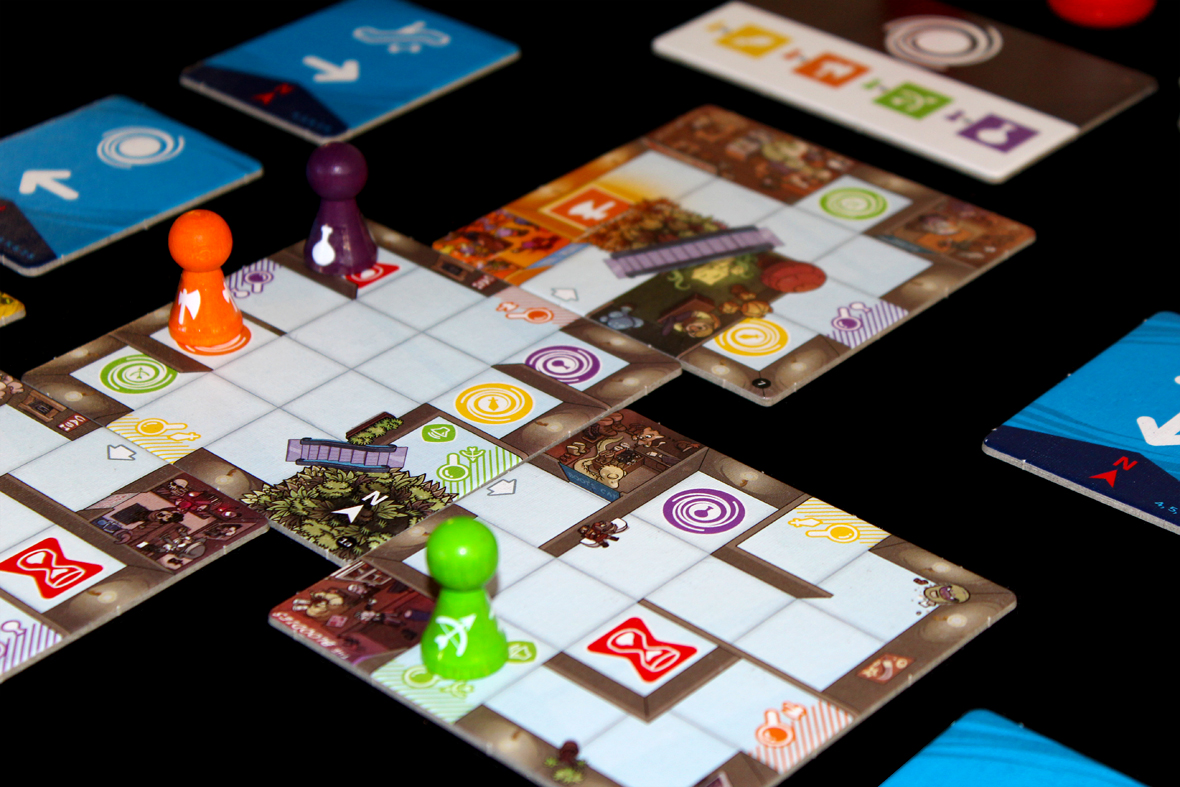 Honestly, I haven’t quite figured out how to do this within my normal writing style, but I’m kind of a “first draft best draft” kind of dude, so here we go.

Basically, in a game of Magic Maze you collectively want to help these four adventurers make their way through the mall to their stores, rob them at the same time, and then escape. As you get better at doing so the game will throw scenarios at you designed to make it harder for you to escape. I’ll describe the first two and leave the rest to you, once I’ve covered the basics of how to play.

So, you remember those action tiles?

Each player will have one and that’s their primary action. Orient all the tiles the same way so they all match the North arrow on the center tile. You’re not moving left, right, up, or down, you’re moving in cardinal directions. That makes your life a lot easier. Unlike most cooperative games where every player has their own piece (Now Boarding, for example), in Magic Maze you’ll all be simultaneously and collectively guiding these four pieces. That can be a bit hectic, so let me describe the actions:

Some Action Tiles have more than one symbol; you may use any or all of the Actions pictured on the tile (and honestly should).

You’ll use these abilities in tandem with your partners to move through the maze, discover new tiles, and look for your Stores: 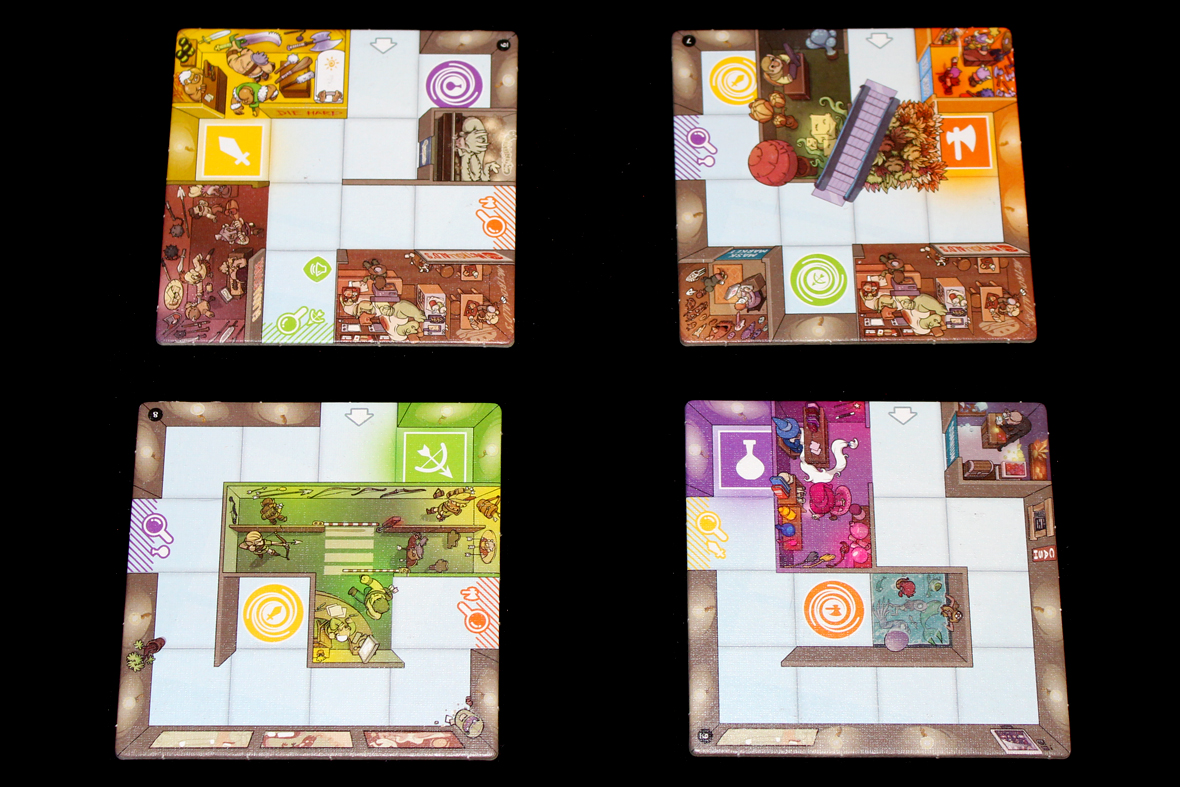 Your stores are where you need to end up in order to rob the places. Once all four pawns are in the stores, you can begin the heist. Flip the Portal Action and the Theft Tile and start making your way towards the Exit: 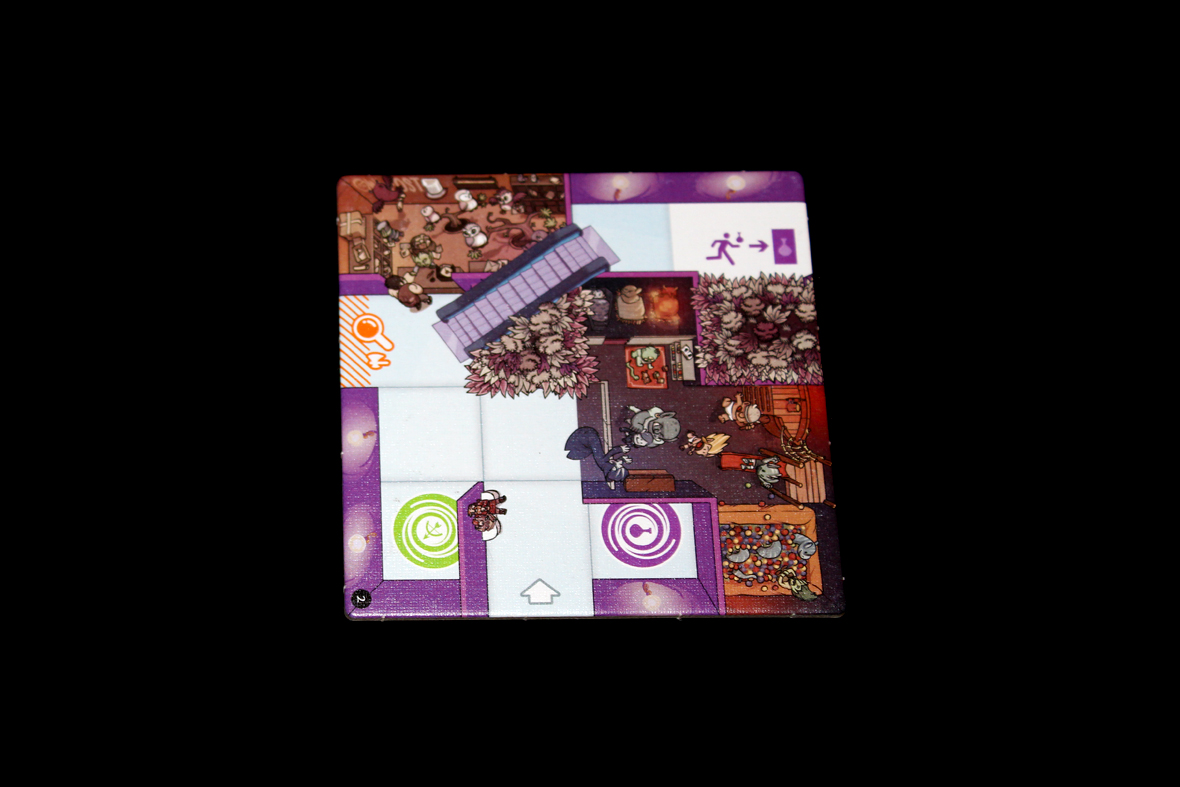 If that runs out, you lose. Naturally, that’s bad, so you need to land on the Timer spaces in order to flip the timer. Don’t get me wrong — the timer is just flipped over; time is not restored. So if you flip the timer too early, you run the risk of still losing. That’s funny, but still pretty bad. Also, Timer spaces are single-use, so once you’ve used one, put an Out of Order X on it:

So the game’s pretty straightforward, right? You team up to move through the maze, discover new tiles, find your stores, rob your stores, and get the h*ck out before the guards catch you. Well, if that were it it wouldn’t be any fun, right?

I mentioned you aren’t allowed to talk, right?

No? Well, let me say it here. Any communication between players is strictly forbidden. No pointing, no coughing, nothing. You are allowed to interact with other players in one of two ways:

There is an exception, though. Whenever you flip the timer, you may talk freely for as long as you’d like or until any player touches a piece. Once a piece is moved, no more talking.

Play continues until you get out or run out of time! Good luck.

I covered Scenario 1 in my description of the basic game above. If you find that that has become too easy for you, try Scenario 2. In Scenario 2, you’ll use all four Exit Tiles (one in each pawn’s color), and each pawn must exit through the exit matching its color (and symbol).

As for Scenario 3, well, that one’s too much fun for me to tell you about, so you’ll have to discover it on your own. It stumped our group for a while. If it makes you feel better, there are 17 Scenarios in the base game of Magic Maze; my group has managed to get up to (but not beat) Scenario 6.

Note that in a Solo game you basically play the same way, but you use the Solo Action Tiles:

These go into a little deck and you flip the top one face-up. If you want to use another action, flip the next one off the top of the deck. You can only use the face-up action. That’ll mess with you. You cannot shuffle the deck unless you move onto a Timer space, and if you choose to shuffle, you must do so while time is running, after the flip. Good luck!

Solo is surprisingly difficult, which I appreciated, especially because it feels the same as the regular game. I quite liked the solo mode, actually. 2 – 3 is a bit underwhelming since you can do so much on your own. I generally prefer the high-chaos levels that come with super-large groups (I’ve had a great time playing this with 8 people), but that’s definitely not for everyone.

If you are playing 8, try to have players with the same action (some actions get repeated) sit across the table from each other so they’re not fighting to do the same things. It makes your life easier.

Basically, solo is awesome, in my opinion, but other than that I wouldn’t play this with fewer than four people. 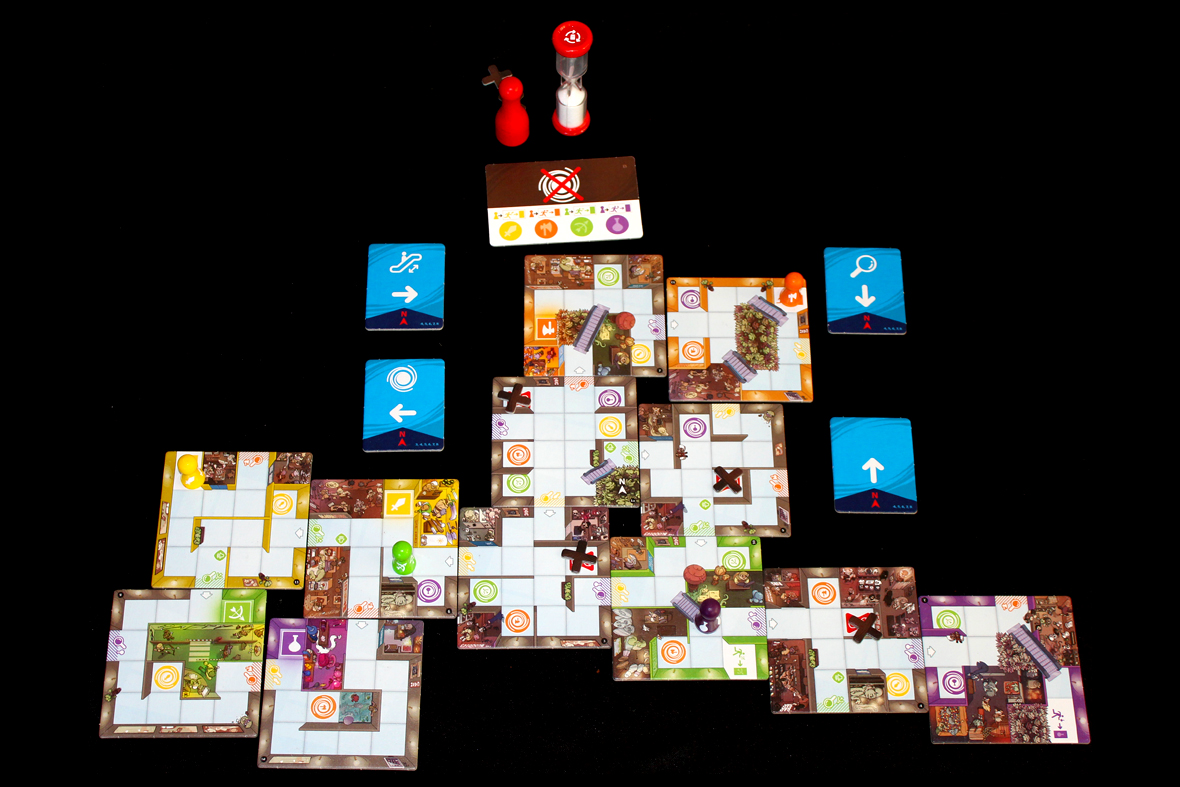 Overall, Magic Maze is super! It’s definitely not for everyone (which makes it kind of apparent why the SdJ didn’t work out), but that doesn’t mean in any way that it’s not a triumph of a game. I love the real-time component being used to add tension, and I love the elements of exploration and discovery. Normally I’m against silent games, but I think that works to its advantage here, as it forces an almost-tactile form of wordless communication between the players. It’s not just about seeing what they are doing, but the game becomes about anticipating and incorporating likely moves into your strategy, and waiting to help other players where you can so you can accomplish a shared goal. It’s a super-great cooperative game, and I’d highly recommend it if you think it would be a good fit for your group!