Base price: MX$ 500
2 – 4 players.
Play time: ~30 minutes.
BGG Link
Check it out on Kickstarter!
Logged plays: 3? Not sure. It wasn’t on BGG when I played it, so I failed to recreate that data. Shouldn’t be a problem in the future, but I apologize for the error, here.

Full disclosure: A preview copy of Cooks & Crooks was provided by Aether Tower Studios. Some aspects of this game may change between this preview and when backers get their copies of the game, as this is a preview of a currently unreleased game.

Never a bad time for a Kickstarter preview, so here we go. Aether Tower’s the creators of the Tricksters card game I previewed last year, and they got me a preview copy of Cooks & Crooks to take a look at before it launches on Kickstarter.

In Cooks & Crooks, you’re in a no-holds-barred cooking competition (or just a really aggressive restaurant) trying to cook the best dishes. Thankfully, you’re not really bothered by the whole “ethics” part of cooking, and it doesn’t seem like your opponents are that much burdened with those thoughts, either. Will you come out on top even if you have to get your hands dirty, or are you going to get … served?

So, first, give every player an oven board: 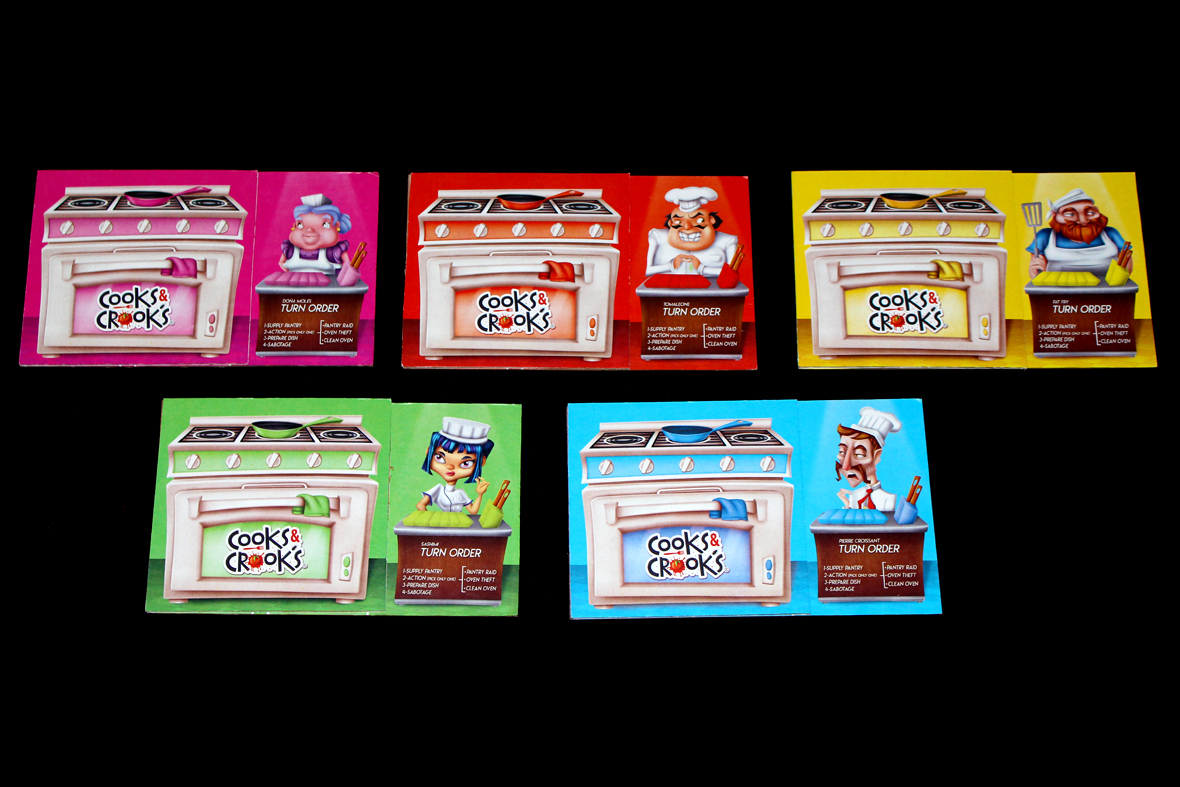 You’ll want to open them up: 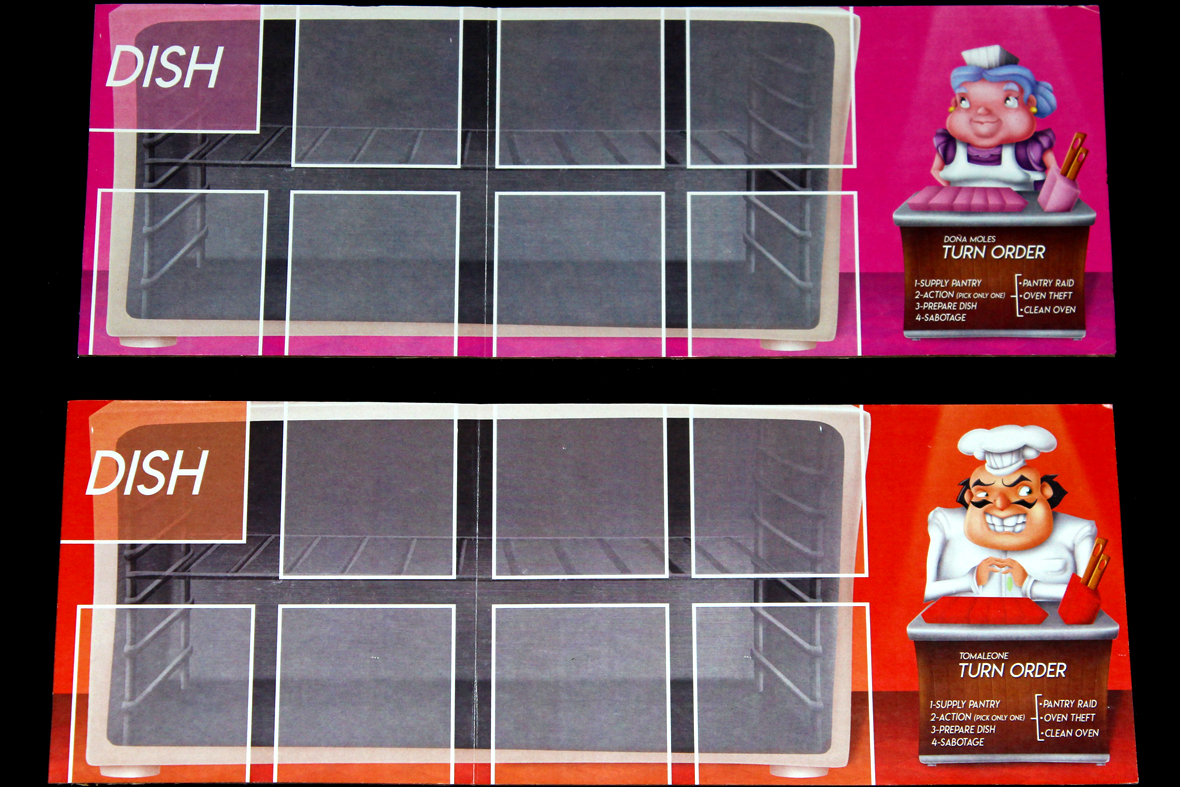 Next, separate out the five types of dishes: 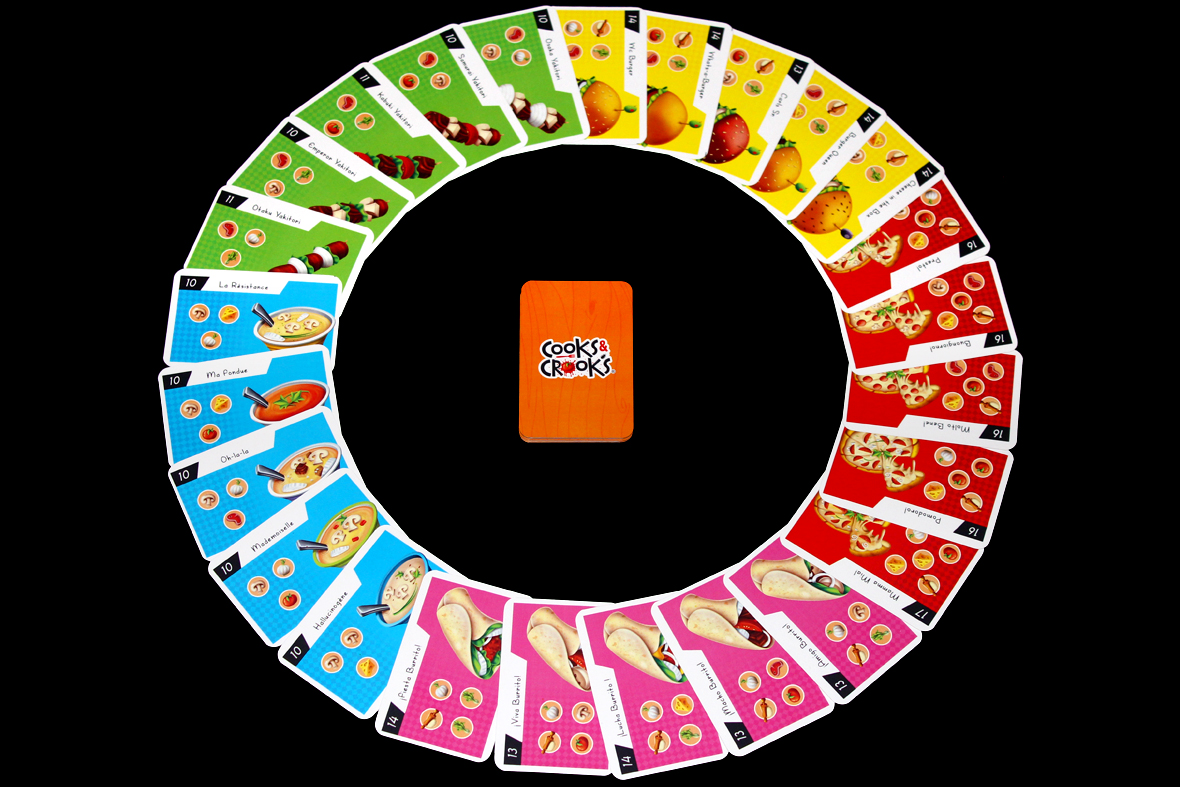 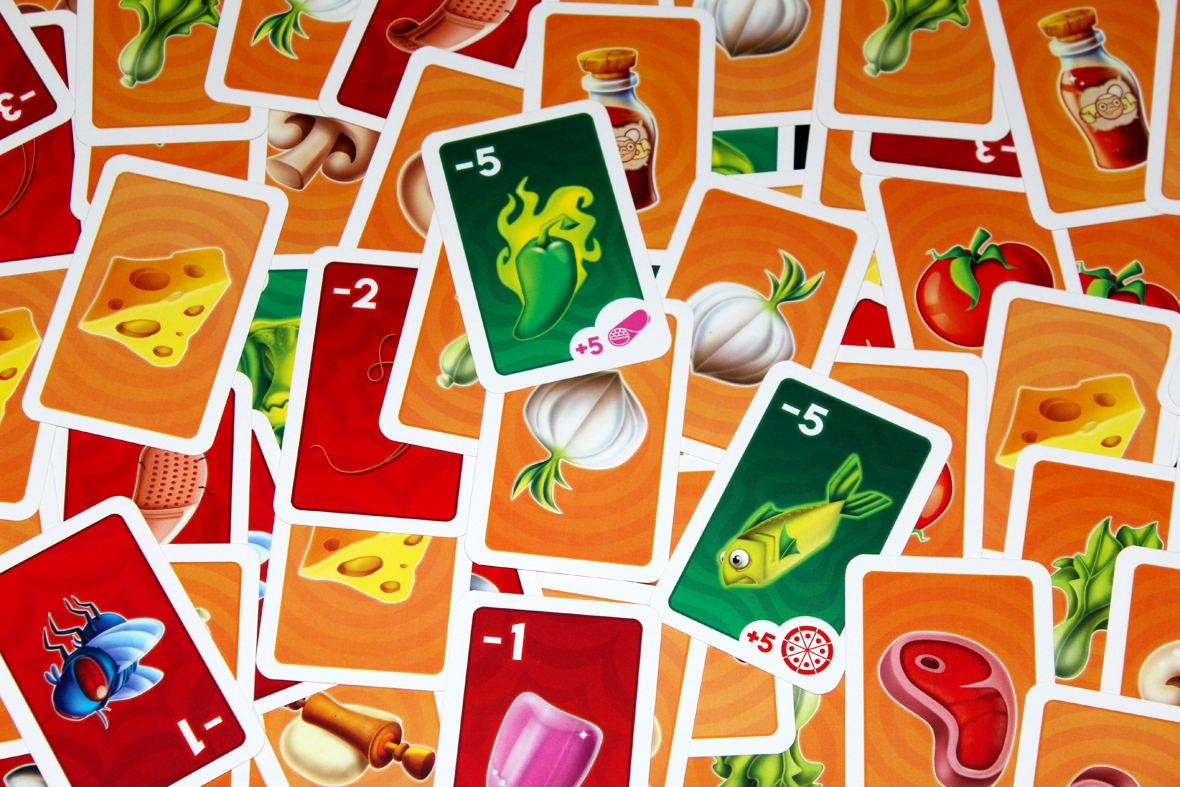 And place them near the Round Marker:

Every player may now look at their hand and discard any number of cards from their hand, drawing back up to three cards.

Once every player has done that, each player takes a Dish card and adds it to their oven, face-up.

Once everyone’s done that, flip the deck over (so it’s face-up) and you’re basically ready to start!

A game of Cooks & Crooks is played over six rounds. During those rounds, you’ll try to add ingredients to your ovens to complete dishes and score points. However, watch out! If you’re not careful, opponents will sneak fairly nasty stuff into your oven and it’ll end up in your food, which reduces its value.

On that note, we should probably talk about cards. There are three kinds of cards: 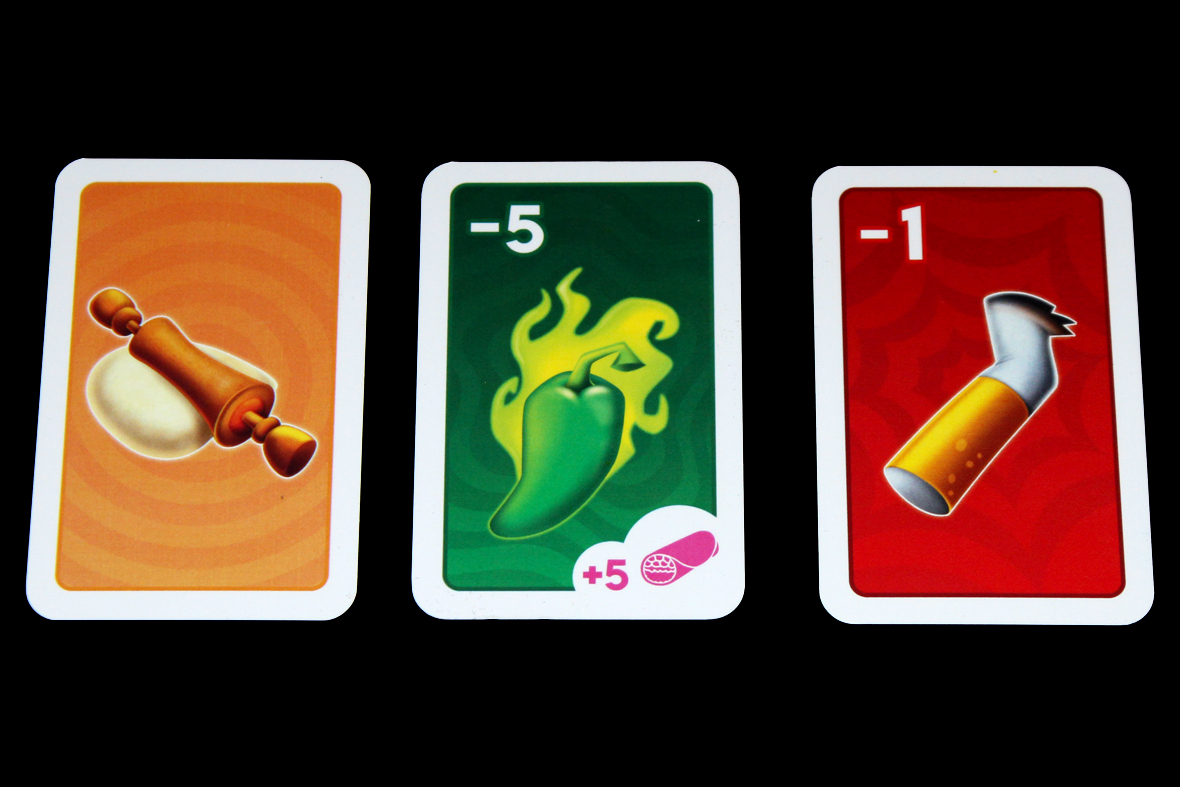 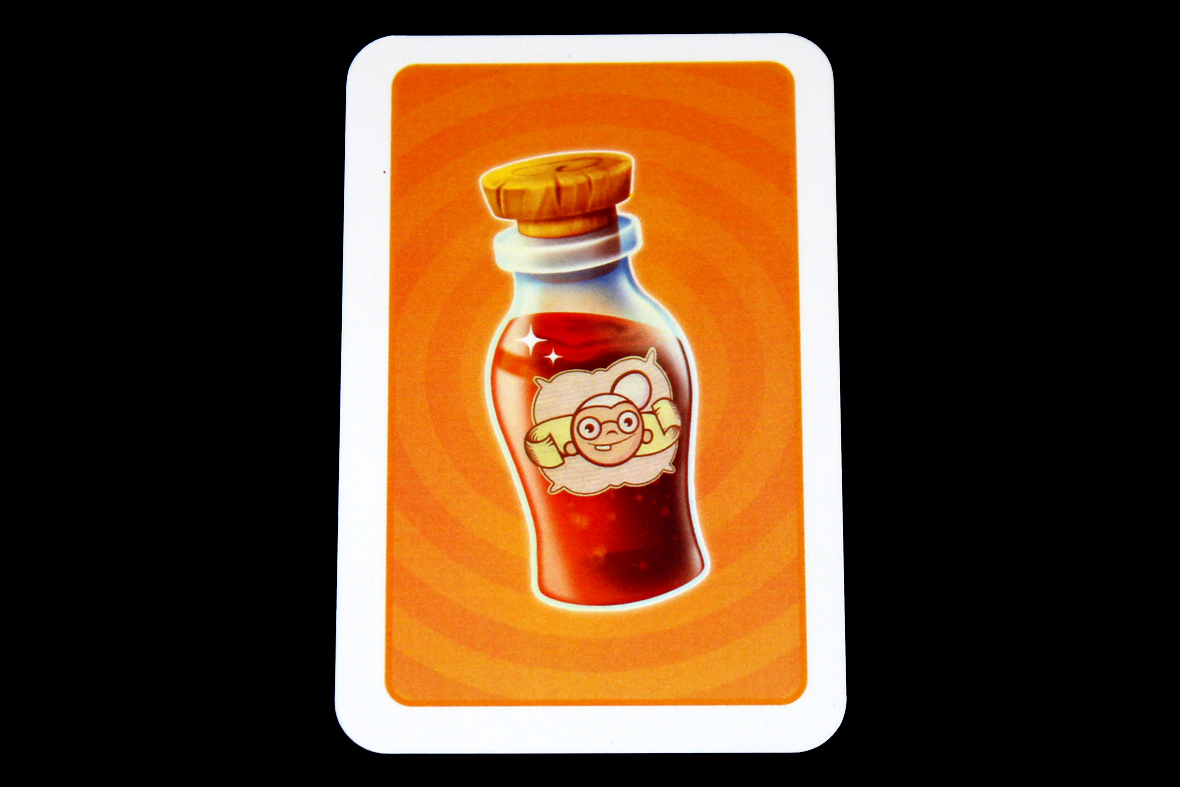 This is Grandma’s Mystic Seasoning. You can use it in lieu of any one ingredient, once per dish. You … can’t just make a dish out of seasoning.

Let’s talk about what makes up a round, then. On your turn, you’ll do the following actions, in order: (You may skip any step you’d prefer not to do, but you must do them in order.)

After each player has taken their turn, advance the round marker and keep going until the last round.

During the last round, if you finish a dish, you may close your oven, making you immune to sabotages from other players (and locking in your score). If you cannot finish your last dish this round, you score partial points at the end of the game:

As with most take-that-heavy games, the more players that are in, the more potential targets that there are and the worse every other player dogpiling on you will be. I would say this game is a bit more predictable at lower player counts and a lot more chaotic at higher player counts. Depending on your preference, you may lean towards one of those over the other; I’m low-chaos, so I’ll express a slight preference for smaller player counts. 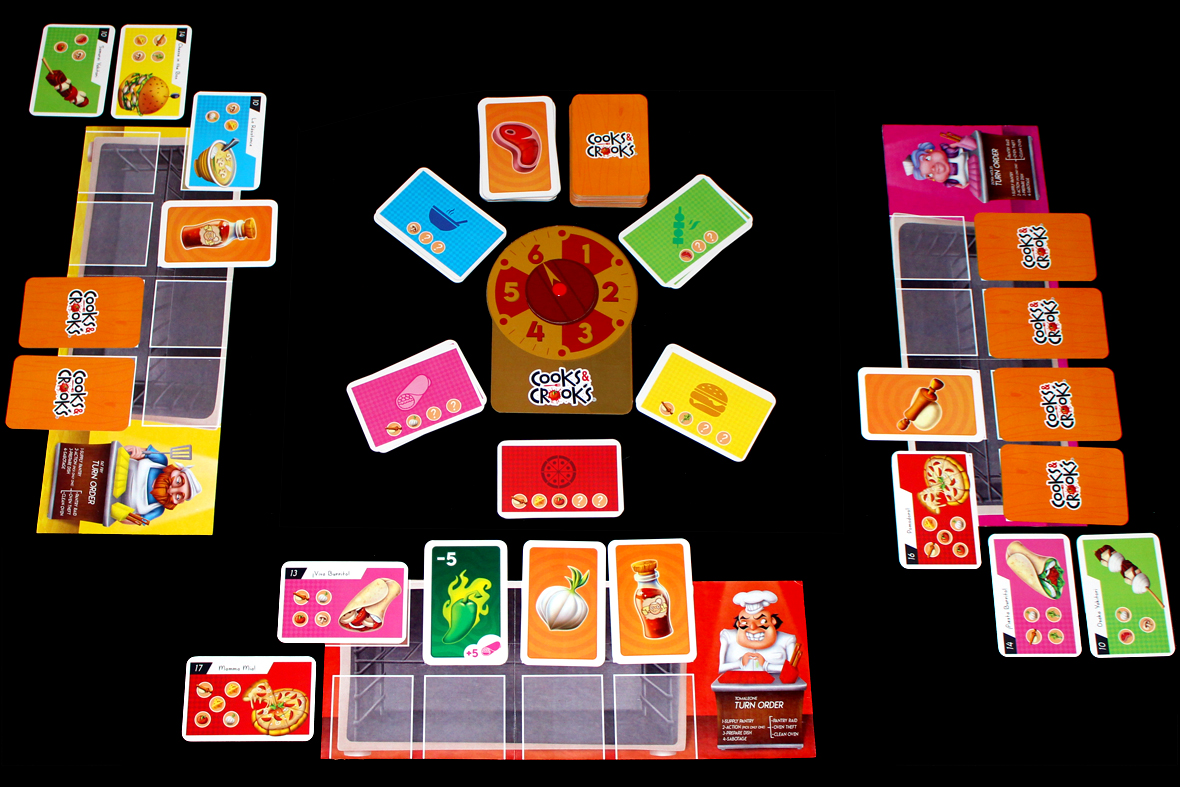 Overall, Cooks & Crooks isn’t bad! It’s very much a decently-high-conflict family game, which is probably not my personal cup of tea, but I’d play it under certain circumstances. I could see myself getting it for my stepnephew as a gift or something, as the “gross” factor might be appealing to kids these days or something like that. Again, though, these are solid games if you’re just getting exposed to modern gaming (as opposed to say, the infinitely-less-thematic UNO). If you think this’ll be a good fit for you or your group, check it out when it hits Kickstarter!