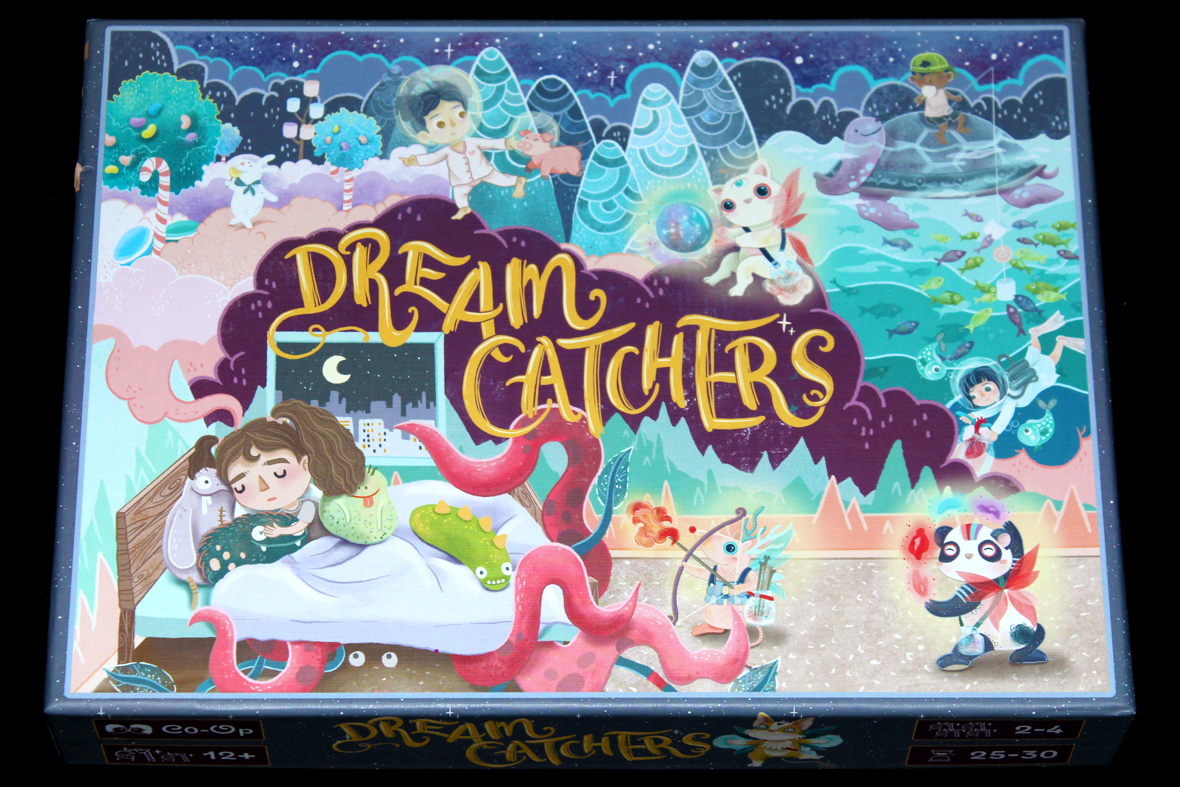 Full disclosure: A preview copy of Dream Catchers was provided by Play Nation. Some art and gameplay details may change between now and release of the game, as this is a preview of a currently unreleased game.

It’s been a hot minute (as of writing, at least) since I’ve done a Kickstarter preview; the last one I did was Mars Open: Tabletop Golf, which was amazing, so it really got me back on the train for some previews. That said, between now and when I post this I’ll inevitably do some more, so look forward to those, as well. I think Seize the Bean, Unbroken, and Cooks & Crooks? Who knows.

Anyways, in Dream Catchers, you play as a group of spirits trying to help ward off bad dreams and worse monsters (turns out the monsters weren’t people, all along) that are messing with a kid that’s trying to sleep. Along the way, you’ll tap into the power of Courage, Strength, Love, … Treats, and more in order to bring about sweet dreams and save the day, or at least the night. Will you be able to survive the night? Or are this kid’s dreams not the only thing about to get crushed?

There are a few pieces to this game! The first one is the various boards:

They’ve all got difficulty levels and specific abilities tied to your monster-catching abilities, so pick your preferred level. I’d start at one-star, if it’s all the same to you, because I’m terrible at this game.

There’s also a die! Set that aside, for now, along with the Weaken Monster Tokens:

Next, you’ll need to assign every player a Dream Catcher:

Think of them as the Dream Eaters from Kingdom Hearts 3D, or as cute Dream Friends if you haven’t dug into that Gordian Knot of a series. They each have their own special abilities, all of which I’ll talk about during gameplay.

Next, set aside the Monster Cards: 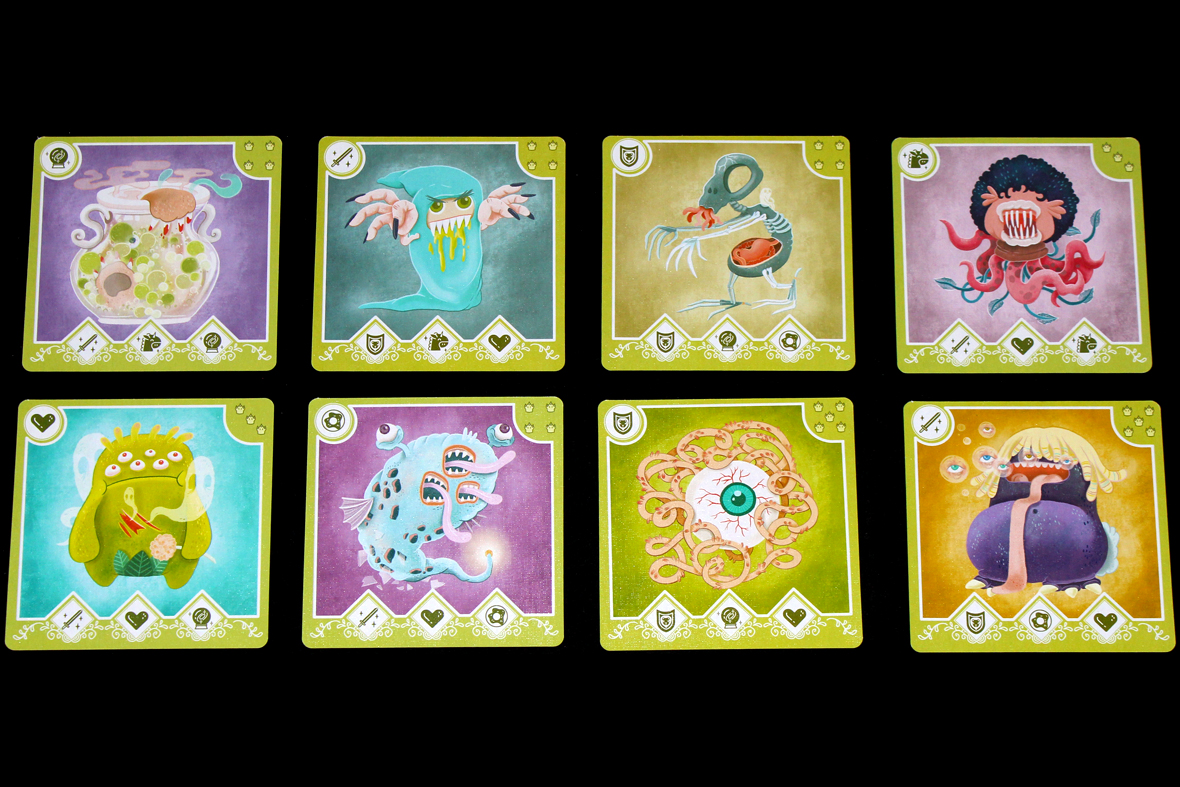 You’ll want to put a grid (3×3) above the bedroom. Don’t worry about the blue / red card ratio in the grid, for now, though uh, good luck if you happen to draw 9 red cards. Live your truth and all that.

Anyways, set aside the Treasure Cards (shuffle them and put them face-down): 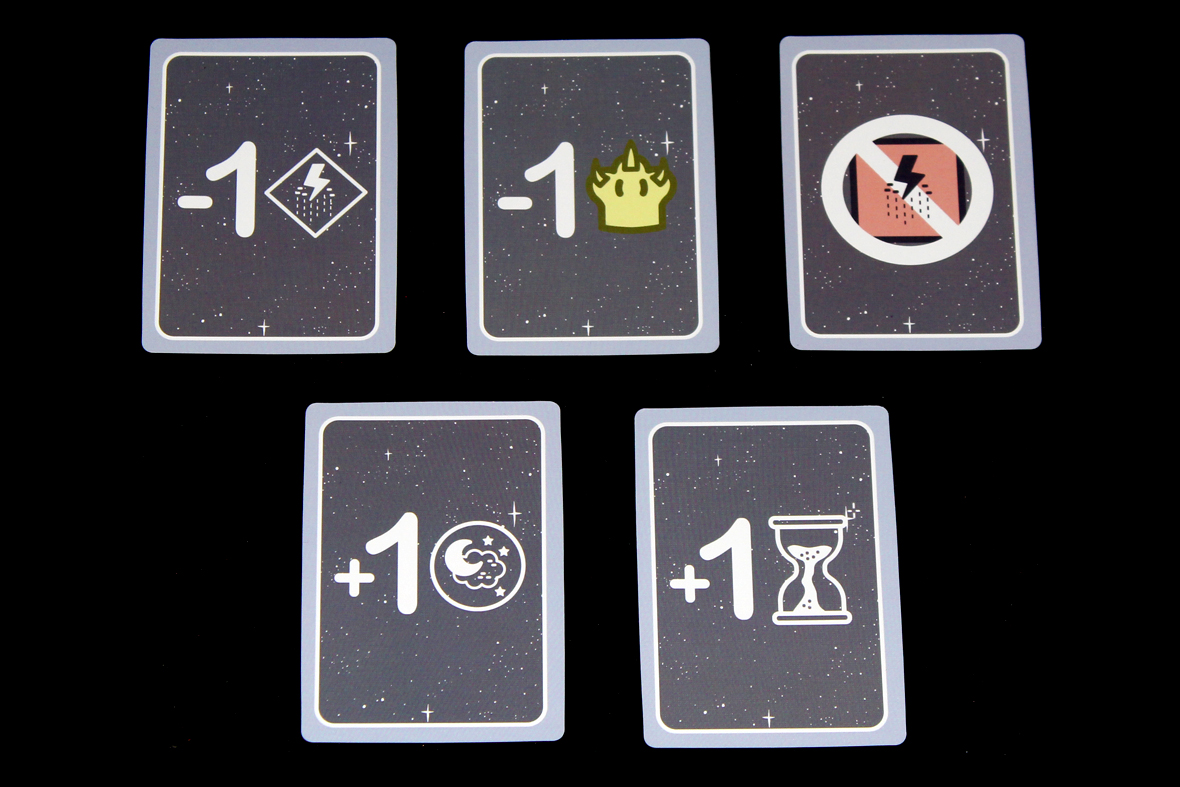 And we’ll deal with those later. Lastly, deal each player four of the Power cards:

Finally, add the Time Tracker (white hourglass) to the Time Track, along with the Nightmare Score (red) and Sweet Dreams Score (blue) trackers to their spaces on their tracks, depending on player count:

Also, add the Monster Tokens to the Time Tracker:

Once you’ve done all that, you’re ready to start! 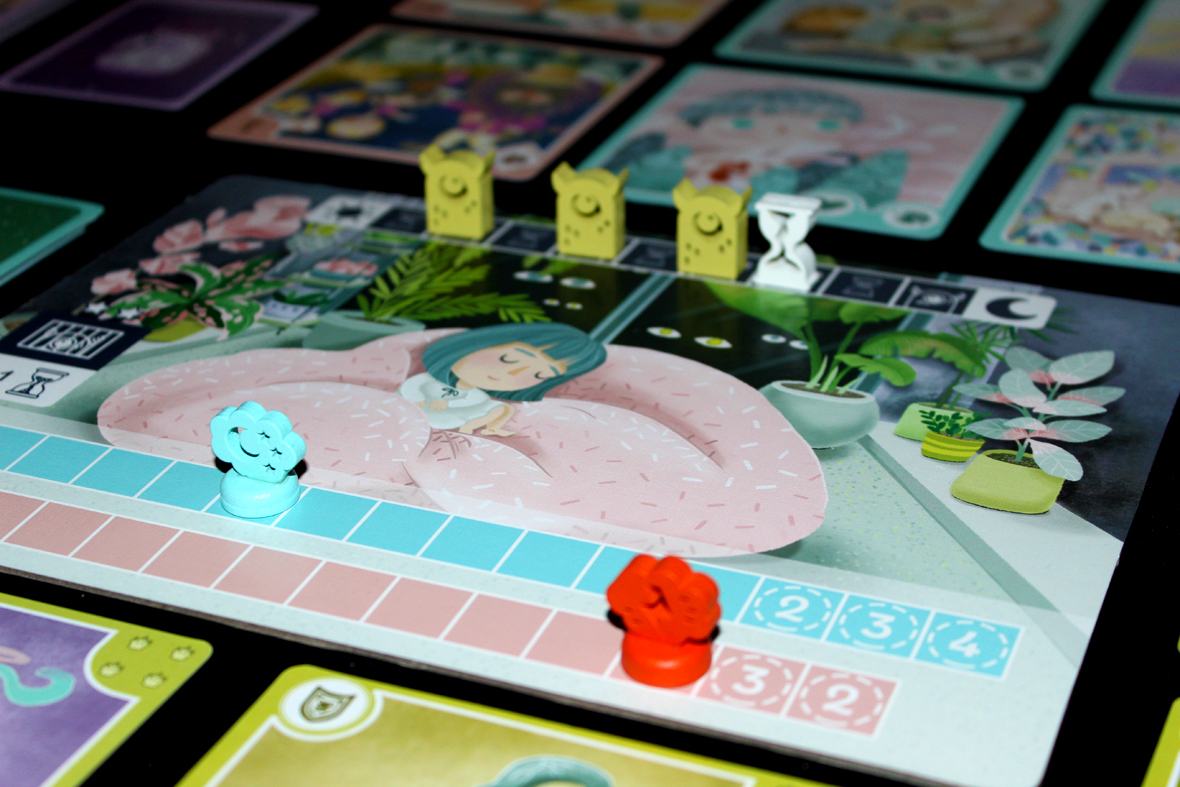 Gameplay takes place over a series of turns. Your goal is to capture Sweet Dreams and Nightmares while fighting off dream-eating monsters!

You win if your Sweet Dream tracker moves all the way to the leftmost (white) space.

So let’s try to figure out how to avoid those things!

On your turn you can take 2 Actions, choosing from any of these (you may repeat actions):

Let’s cover those in turn.

This one isn’t particularly exciting; you can just swap a single card with another player (with their permission). Do this if you don’t have anything else to do, or you want to try to set up another player’s turn.

If you want to Catch a Dream, first, look at the Dream Cards. Each have symbols in the bottom-right corner that match symbols on the Power Cards that you have to discard in order to catch this dream. If you discard that combination of Power Cards from your hand, you catch that dream! Discard it from the grid (do not draw to replace it, yet) and advance the Sweet Dream tracker one to the left. Nice job!

If that Dream Card has a Treasure Chest in the bottom-left corner, you also earned a Treasure Card! Draw it and activate its effect immediately. This can have various effects:

Apply those effects immediately (move the Nightmare / Time Trackers to the right, Sweet Dream tracker to the left, or put a Weaken Monster token on a monster of your choice). If you don’t understand what those do, keep reading; I’ll get to it.

Again, if taking this action / gaining a Treasure causes you to hit the leftmost Sweet Dream space, you win! Congratulations.

Nightmares are pretty bad, and you’d like to be rid of them for currently unknown reasons. Thankfully, you can catch them just like dreams! Nightmares, too, have symbols in the bottom-right that you can find on Power Cards. Discarding that card or cards will let you catch the Nightmare and remove it from the grid! Note that catching Nightmares does not reduce your Nightmare Score. You’re kind of stuck with that.

Maybe, you think, the real monsters were people all along? Well, not this time. This time they’re actual, dream-eating monsters. You need to stop them before too many get under this kid’s bed, because then they’ll start demanding representation in local government and they’re beholden to special interest groups.

Either way, you can fight Monsters, too. Take a look at a Monster:

These have three symbols on them. If you have all three symbols in your hand, you can attempt to fight the monster! The number in the top-right corner is the strength of the monster; roll the die and see if you match or beat that number. If you do, great! Discard the monster and the matching Power cards. If you don’t, you may use your second action to try again. If you still fail, do not discard your Power cards. You may be able to fight them on your next turn, again.

Either way, some of these monsters are pretty strong! Thankfully, you can occasionally earn Weaken Monster tokens to reduce their strength by 1 per token. That’s nice.

There are also six character abilities, depending on which character you have:

These are, in order:

Once you’ve done two (or three) Actions and your Character Ability (if you want), it’s time for the Night Phase! Draw back up to 4 Power cards.

The Night Phase has steps, as well:

When a Monster attacks, reveal the top card of the Monster deck and put it under the bed (below the board). If this means you have three Monsters under the bed, you lose, immediately. Try to avoid that.

Now, the Monster eats dreams! Discard all dreams from the grid that have a symbol (of the two that they have) matching the one in the monster’s top-right corner. That’s probably not helpful!

Now, refill the Dream Grid by drawing the top card from the Dream deck and placing it down, left-to-right then top-to-bottom.

If you reveal a Nightmare, it attacks, too!

If there are no matching cards, the Nightmare is persistent! It tries one more time, but before it does that, it moves. Check the arrow in the bottom-left corner of the Nightmare:

In each case, the Nightmare would move in that direction and swap places with the card at that location. If that would move it out of the grid, wrap it around and swap its card with the card on the other side of the grid. Now, check all orthogonally adjacent Nightmare cards again to see if there’s a match. If there is, discard like previously mentioned. If not, you’re good!

If you manage to get the Sweet Dream score tracker all the way to the leftmost space, you win! Congratulations. You’re ready for a higher difficulty, probably.

Each of the Player Boards also has an ability to go with their difficulty, as follows:

I think the primary difference here is that, unlike Pandemic (the other hand management co-op I immediately think of), you don’t start with fewer cards in hand, so you end up being able to see more cards at higher player counts. That said, you do have a lower threshold for Nightmare Score and a higher threshold for the Sweet Dream score in order to lose / win, so there’s some balancing on that side. I’d still probably most likely play this at four, though, because you also get the benefit of multiple abilities, even if you have to wait longer to be able to use those abilities.

Overall, Dream Catchers is a solid cooperative game! I feel like it’s pretty difficult (and I’ve played a lot of co-op games), so that’s kind of saying something. Sure, with perfect information co-ops you have to worry a bit about quarterbacking, but just show obnoxious players where the door is. It’s a light and whimsical game about protecting kids from their nightmares (which, can get pretty real), but there’s a nice, deep level of strategy and planning that you need to do to mitigate the bad luck that will inevitably come your way. If you’re looking for a challenge and you’re not afraid of the dark, check out Dream Catchers!