Full disclosure: A preview copy of Fire in the Library was provided by Weird Giraffe Games. Some art, gameplay, or other aspects of the final product may change between now and Kickstarter fulfillment.

Kickstarter preview season is in full swing, as you can tell! Seize the Bean, Unbroken, Highways & Byways, Cat Rescue, Mystery of the Temples, Herbalism, and all kinds of other games are coming to Kickstarter (or have already come and gone from Kickstarter — I write these reviews at random points, so they’re not always super temporally grounded). Anyways, this next one is from Weird Giraffe Games, publishers of Stellar Leap and Super Hack Override, two games you’ve seen covered here in the past.

You can keep telling yourself that you didn’t start the fire; you can even write a whole song about it, if you want. Fact of the matter is the fire is currently happening, and wouldn’t you know, it’s happening to your library of extremely flammable books. This is rather inconsiderate and you should ask to speak to the fire’s manager immediately. Regardless, you’re going to do the only thing a responsible librarian should do: rush into the library and try to save books! (Editor’s Note: What’s Eric Playing? strongly recommends against doing this; call the Fire Department.) Will you be able to save enough books? Or will your accumulated knowledge go up in smoke?

First thing you’re gonna want to do is set up the Library; that way you can appreciate all the terrible things that are going to happen to it (and also appreciate Beth Sobel’s fantastic art):

Set that within view of all players. Also, give each player one of the six Librarian Meeples: 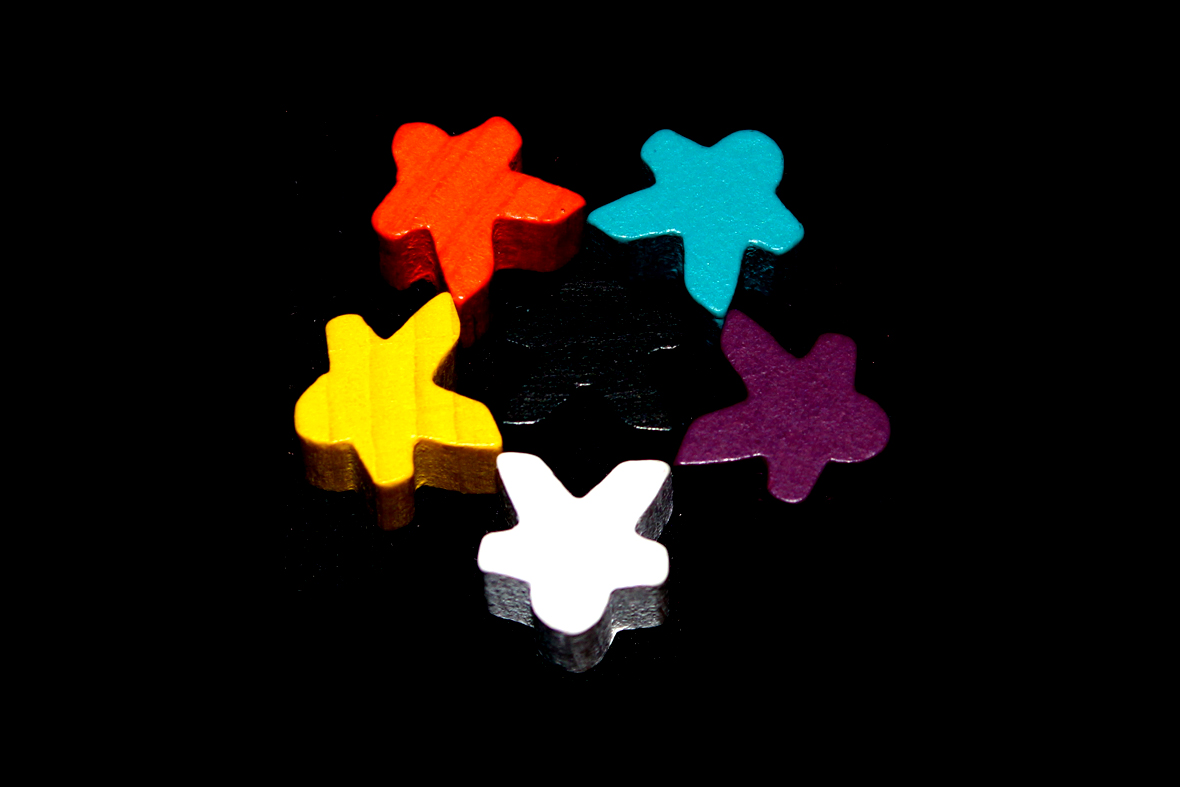 The black meeple didn’t come out so well in that photo; a consequence of shooting against a dark background. There are six there, for what it’s worth. Set the meeples by the score board:

Give each player two Tool Cards, as well:

That’ll help you potentially break things out of the Library. Always useful. Set the rest near the center and flip three face-up, forming a sort of Tool Market. Speaking of the library, better prep the books. The game should come with a bag, so dump the book tokens in there: 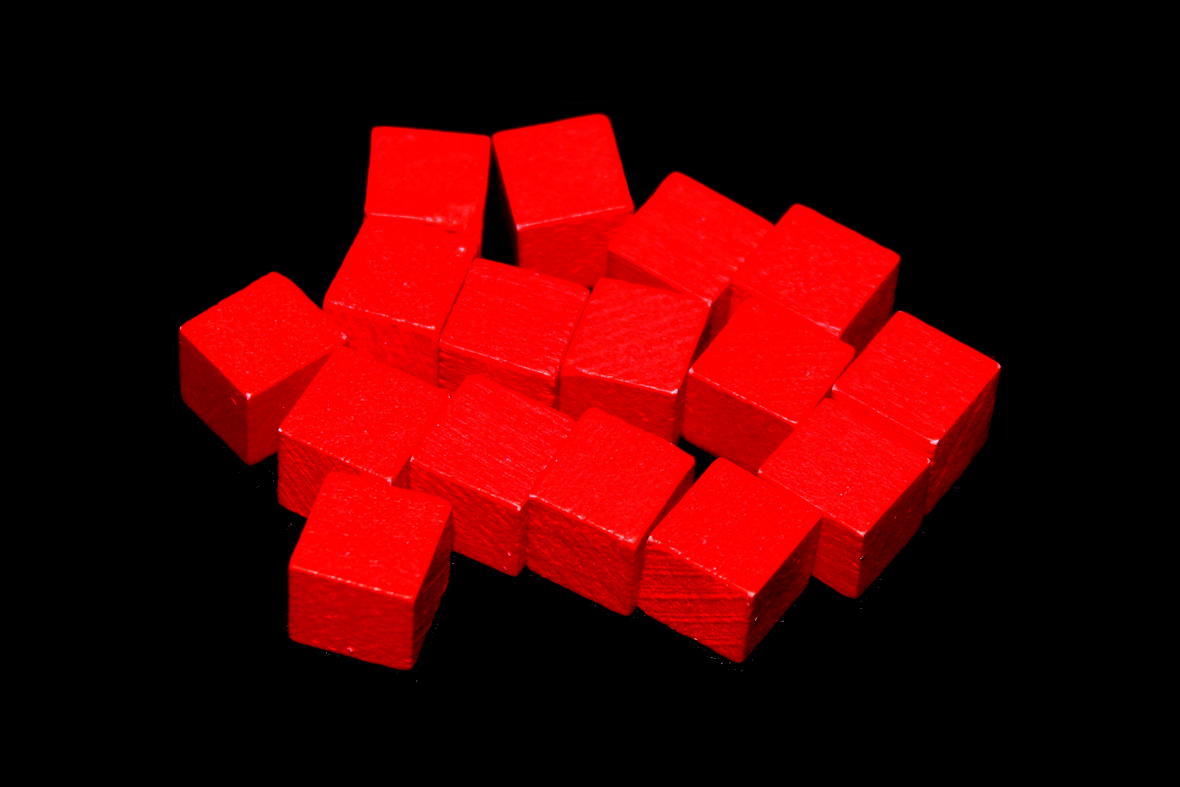 These are fire tokens. They’re just … pure heat. Anyways, for the first round, randomly deal out the Turn Order cards:

(For a solo game, don’t do this.) You should be all ready to start!

So, Fire in the Library is played until you run out of Library. On your turn, you’ll have to try Saving Books, first.

During this phase, you’ll attempt to grab books from the now-burning library. Be careful! Trying to grab too many books may only make the fire worse. However, this means you can use certain Tools that have the Saving Books icon on them (it’s a hand underneath the book).

If you’d like to attempt to save a book, draw a token from the bag and place it in the left-most open space of your Turn Order card. If it’s a black, white, yellow, or purple token, great! You saved a book. If it’s a red token, well, you might have done something far worse.

If not, great! You can keep going until you want to stop. If you ever want to stop and haven’t caused the fire to spread, you’ll move on to the Score Books Phase.

Unlucky! You grabbed a fire token at the wrong time and caused the fire to spread. So, not only do you lose the points that you would have gained, you also burn down part(s) of the library! However, you may use tools that have the Fire Spreads icon on them (a book burning). If the tool makes it so you no longer have a fire token on a Risky Space or two fire tokens, you can go back to saving books! Otherwise, keep reading.

For each book token on your Turn Order card, discard the top-most card in the Library Cards of that book’s color. If you see a fire symbol revealed on the next card, add another fire token to the bag. Congratulations! Now there is even more fire.

If, as a result of doing this, at least one section of the library is completely burned, the game immediately ends!

If not, play continues and you may take a card from the Tool Market as a consolation prize. If you don’t like the three visible tools, you may draw the top card of the Tool Deck instead.

If you make it to this phase instead, congratulations! You managed to save some books from the burning library. Each book is worth points equal to the number on the Library Card of its color. If you placed on any number of Risky Spaces (spaces with fire icons), the other people are impressed by your bravery, earning you extra points! You score the highest value you have tokens above. (It’s not cumulative.) You may also use any tools that have the Score Books Phase icon (a stack of three books, currently). These generally help improve your score.

Discard the tokens to the bag. If you did not place on any Risky Spaces (so you placed on spaces with the Tool symbol, instead), you may take a card from the Tool Market. Again, if you don’t like the three visible tools, you may draw the top card of the Tool Deck.

Once all players have played, the round ends. Regardless of anyone’s best efforts, the Library still burns … a bit. Discard the lowest-indexed (the small number on the Library Cards, not the big one) Library Card. Again, if you reveal a card with a flame icon, add another fire token to the bag.

You may also discard a Tool card to draw another one from the top of the Tool Deck (you may not take from the Market).

During this phase, you can play tools with a Choose Turn Order icon (an hourglass). Otherwise, players will choose their Turn Order card in score order, starting with the player with the lowest score. If there’s ever a tie on score, the player who arrived to that spot first (the scoring spot, not the place where you’re playing) goes first.

As mentioned previously, if the Library ever loses an entire section, the game is over! Any Lockboxes with a book from a completely burnt section are now worth 10 points, and the player with the most points wins!

The solo game plays very similarly to the regular game (in fact, you can just add the AI as another player in other games. How does it work? Well, the AI turn happens similarly to your turn:

As for you, you can choose any of the six Turn Order cards, but once you’ve used it, you can’t use it again until you’ve used all the other ones. Be careful!

Also, do not burn the Library at the end of the round. If the AI burns the last section, it does not score.

If you can beat the AI, you win!

If you like the idea of a robot just ruining you in real life, you can also add the AI to non-solo games. In this variant, the AI just takes the lowest available Turn Order card. On its turn, it does the same thing as if you hadn’t burned in the Solo Game. This time, however, instead of just giving it 2 Bravery Points for every book it saves after the first one, check its turn order card to assign Bravery Points. This is a useful thing to add to games, reminds me of the Automa rules for Between Two Cities and Charterstone.

Similarly, do not burn the Library at the end of the round. If the AI burns the last section, it does not score.

The major thing I’ve noticed is that at higher player counts it’s a lot easier for the game to get away from you, in certain ways. If you take 5th and someone else accidentally ends the game before you get your turn (much more likely, relatively speaking), then you just missed out on a whole scoring round! Plus, each turn is a bit harder since more players means a higher chance of burning, which means that even your early turns you’re more likely to have extra fire tokens in the bag.

Honestly, though, that makes the game faster and riskier, which I’m completely here for. I’d recommend it at any player count. Even the AI variant is pretty solid. 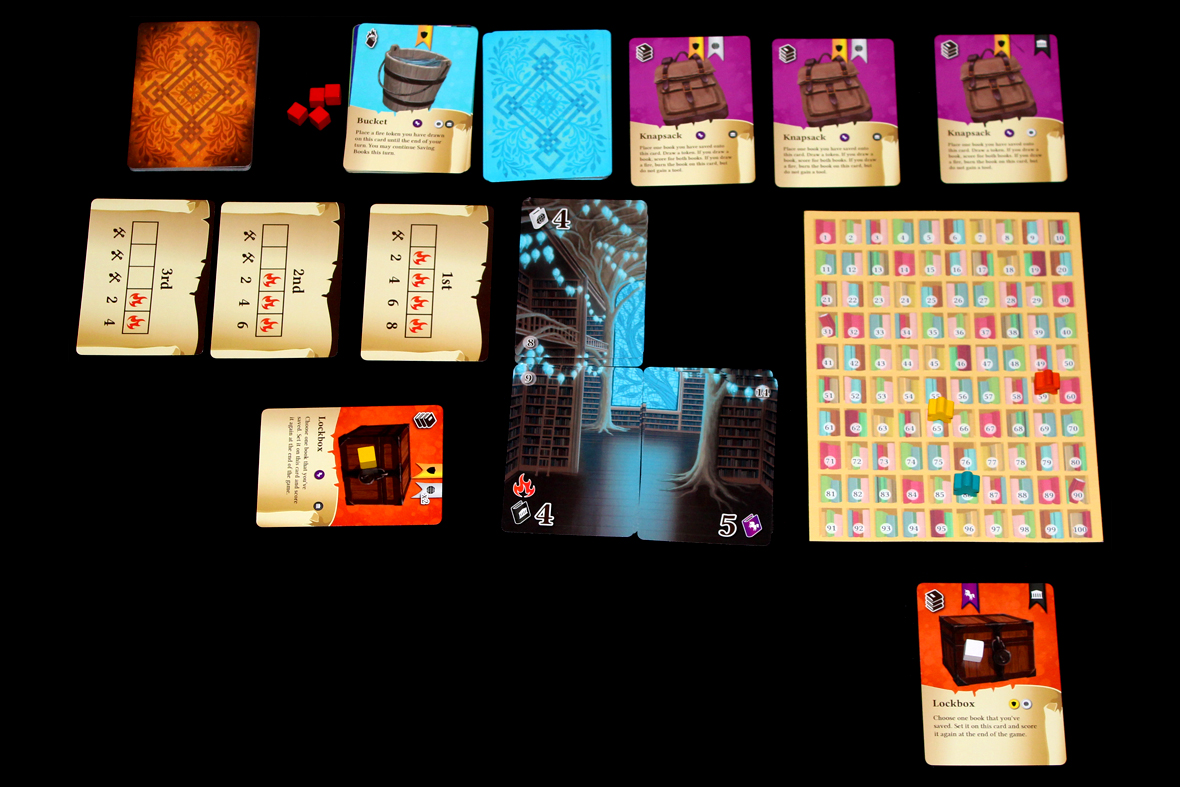 Overall, I think Fire in the Library is a great little game! The theme is neat, the gameplay is light and fast, and even if you have a straight terrible game because your luck is bad, it doesn’t last too long. I think this does lead to games where nihilistic players will just let the library burn to drive the game toward conclusion faster (whether it benefits them or not), but, you can ignore them and look at Beth Sobel’s awesome art, frankly. I mean, if you don’t even want to play with other people, the AI variant is interesting as well, so you can just play with it. This has the nice appeal of being a simple enough game that you can bring it to a family gathering and teach people, but it’s got a fun depth to it that I think will appeal to more seasoned gamers as well. Plus, I mean, it’s a game about fire, and fire is … it’s good. Bummer about the books, though. I think Weird Giraffes made a great move signing this game, and I’m looking forward to seeing what they come up with next!