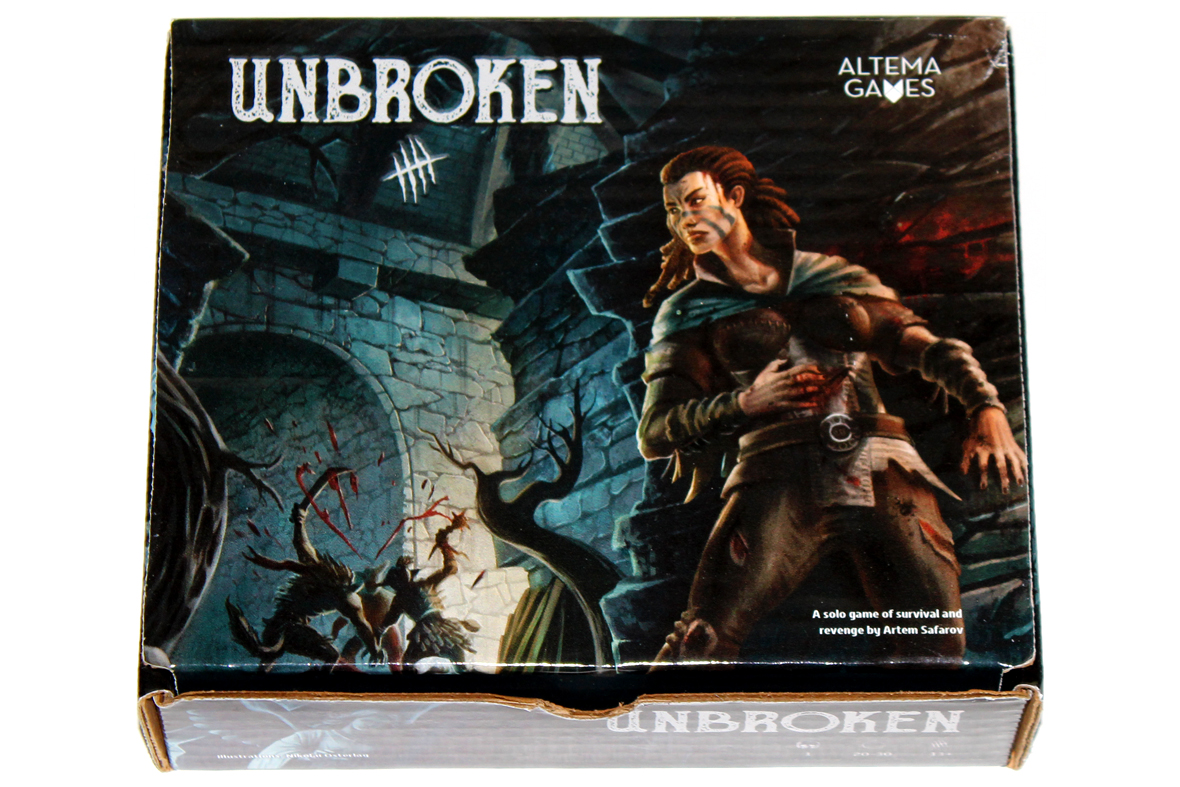 Full disclosure: A preview copy of Unbroken was provided by Altema Games. Some gameplay, art, and components may change between now and release, as this is a preview of an unreleased game.

I don’t really … do solo games. I’ll play them occasionally, but I generally only do them when I have nothing else to do or there’s nobody around. I play them even less than I used to, now, as I spend most of my time playing the Switch when I have a free 30 – 60 minutes, or I spend time on here writing. That said, don’t pass up the opportunity to try something new, yeah?

Unbroken is a game where you’re the sole survivor of a dungeoneering party that went horribly wrong. Monsters attacked, wounded you, killed (and probably ate, to be fair) your friends, and now you’ve got to escape. You’ll need your wits about you as well as your strength, and probably … some wood? I guess? That’s one of the resources. Anyways, will you be able to make it out alive?

So, you’re gonna find a bunch of stuff in the box. The first thing you should deal with is the display sheets: 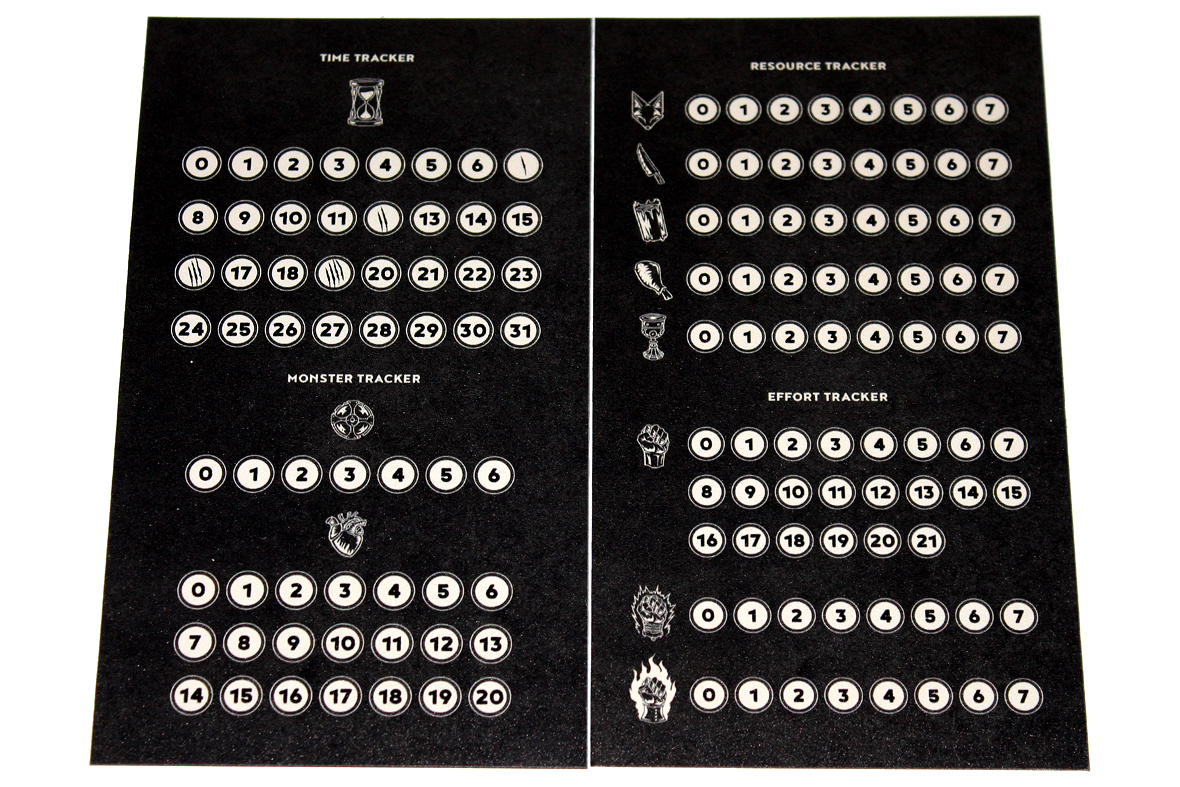 You’ll want to set those out in front of you since that’s what you’ll be interacting with the most. Place a token on the 7 space under time (it should have a I symbol of some kind on it, symbolizing that that’s how much time you get on the first level). You can, if you want, place tokens on the 0 spaces for all the other stuff. Might save you some bookkeeping later on. There’s also a die, but it’s too small to take a useful picture of. Maybe I will, anyways.

Next, pick a character: 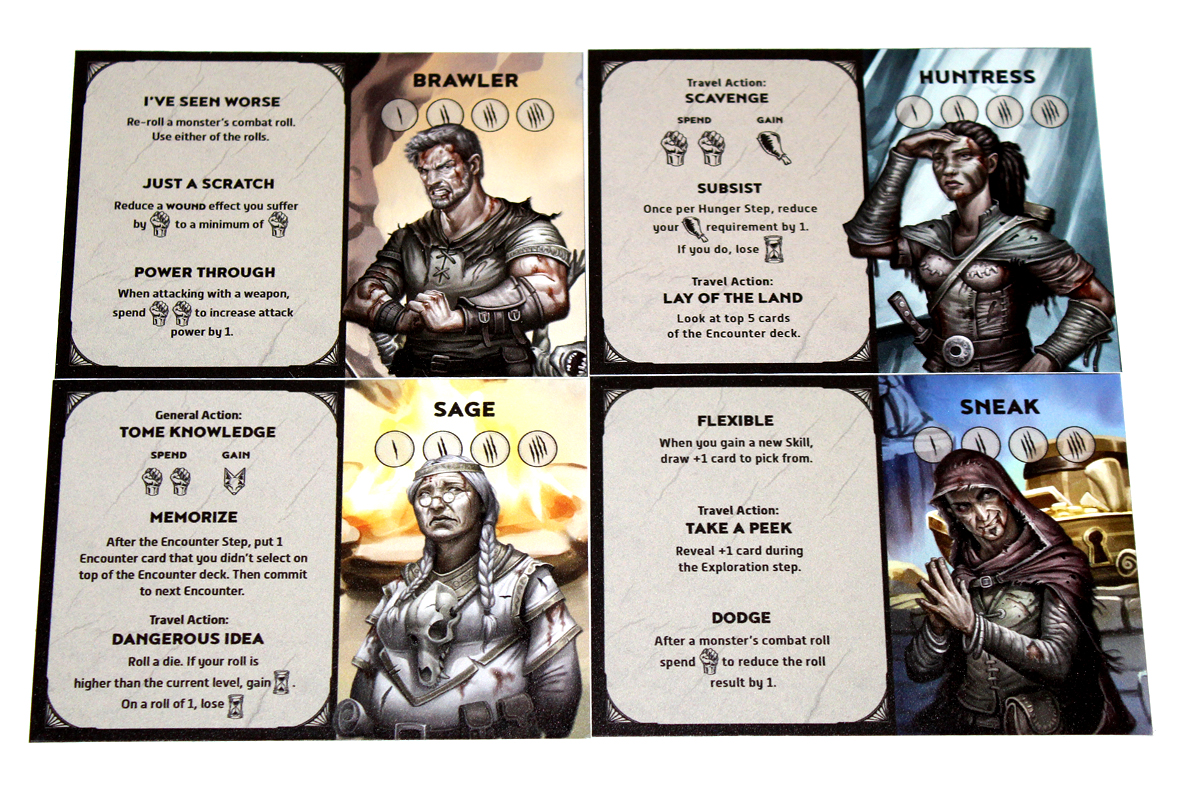 They all have different strengths and weaknesses. Put a token on the I space on the Character card as well.

Now, set up the rest of the play area. You can shuffle the Skill cards: 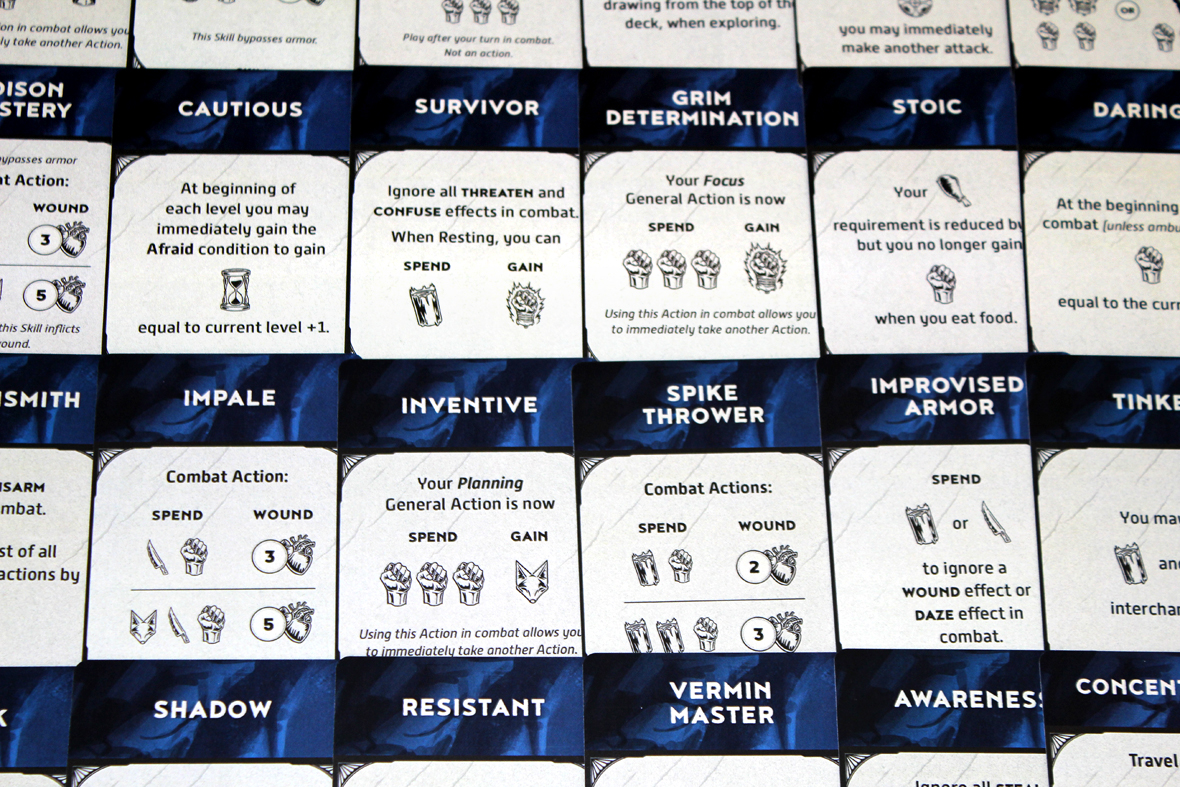 Set them somewhere nearby. Shuffle the Encounter cards, as well: 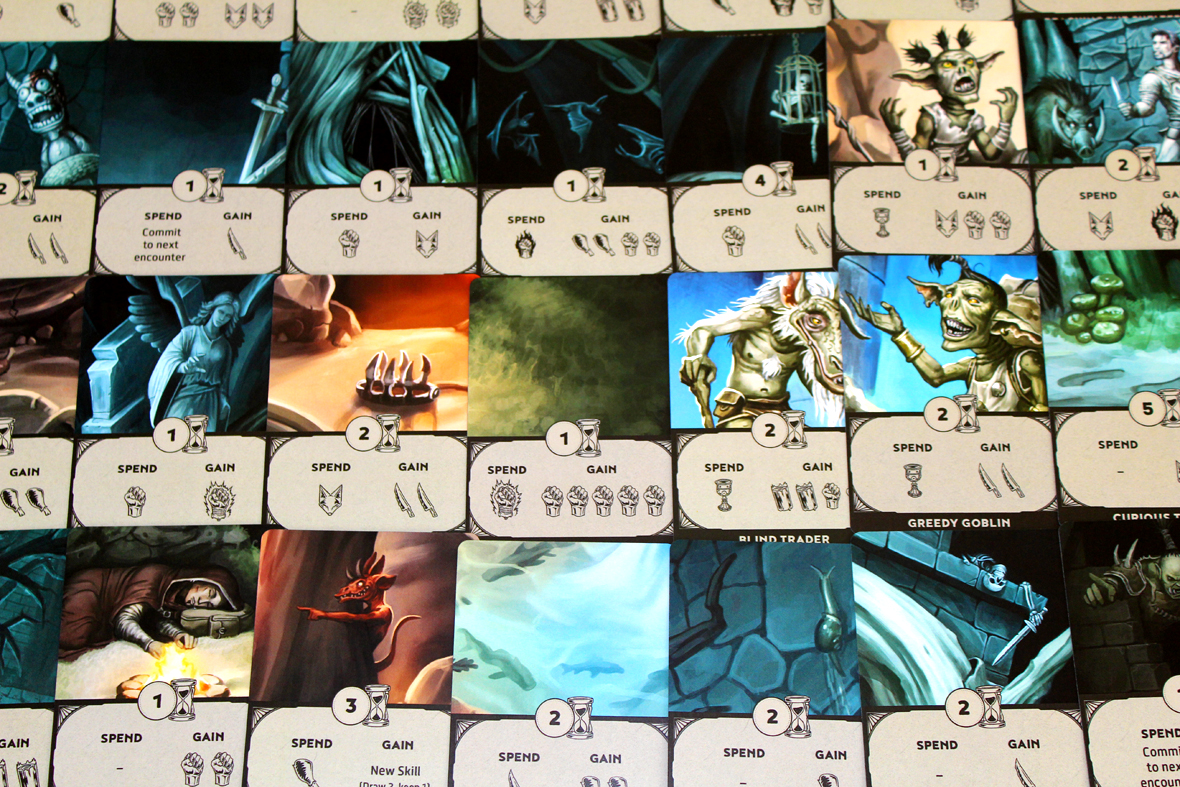 DO NOT shuffle the Condition cards. Just leave them in some ordering (I usually do alphabetical): 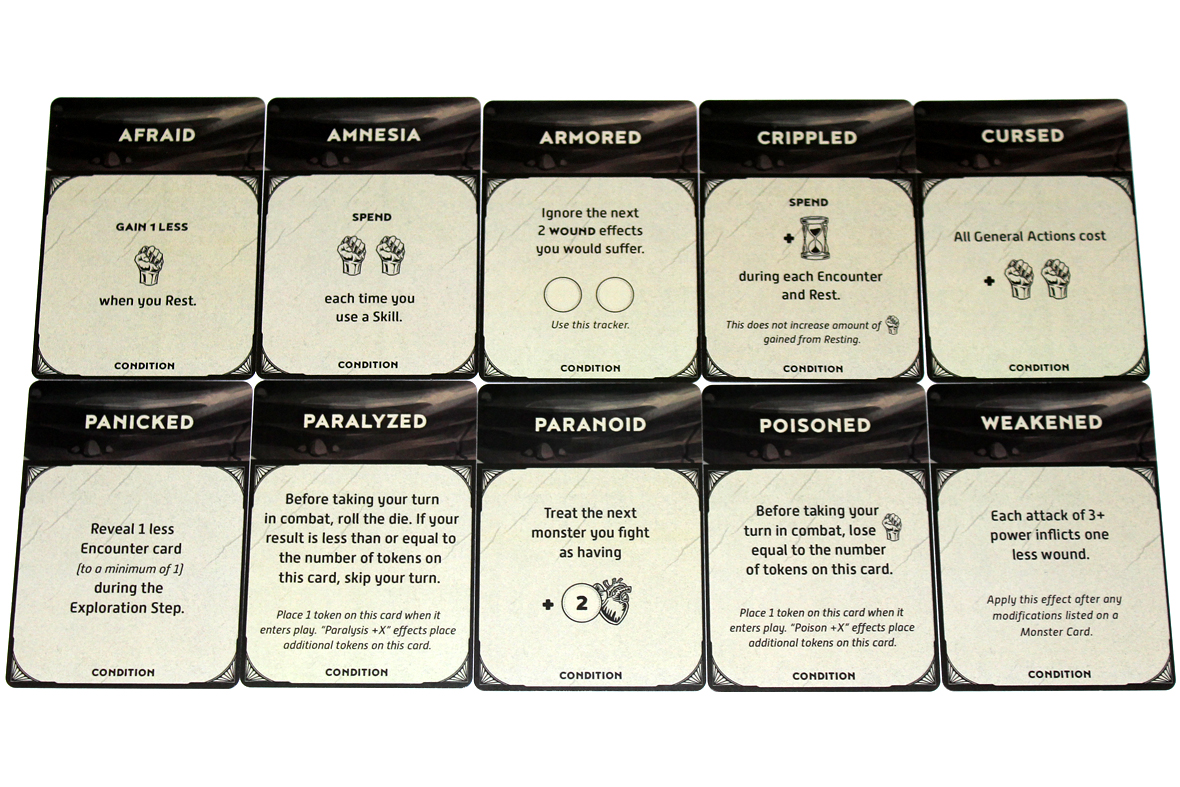 Don’t shuffle the Monster cards, either. Sort them by level and set them aside: 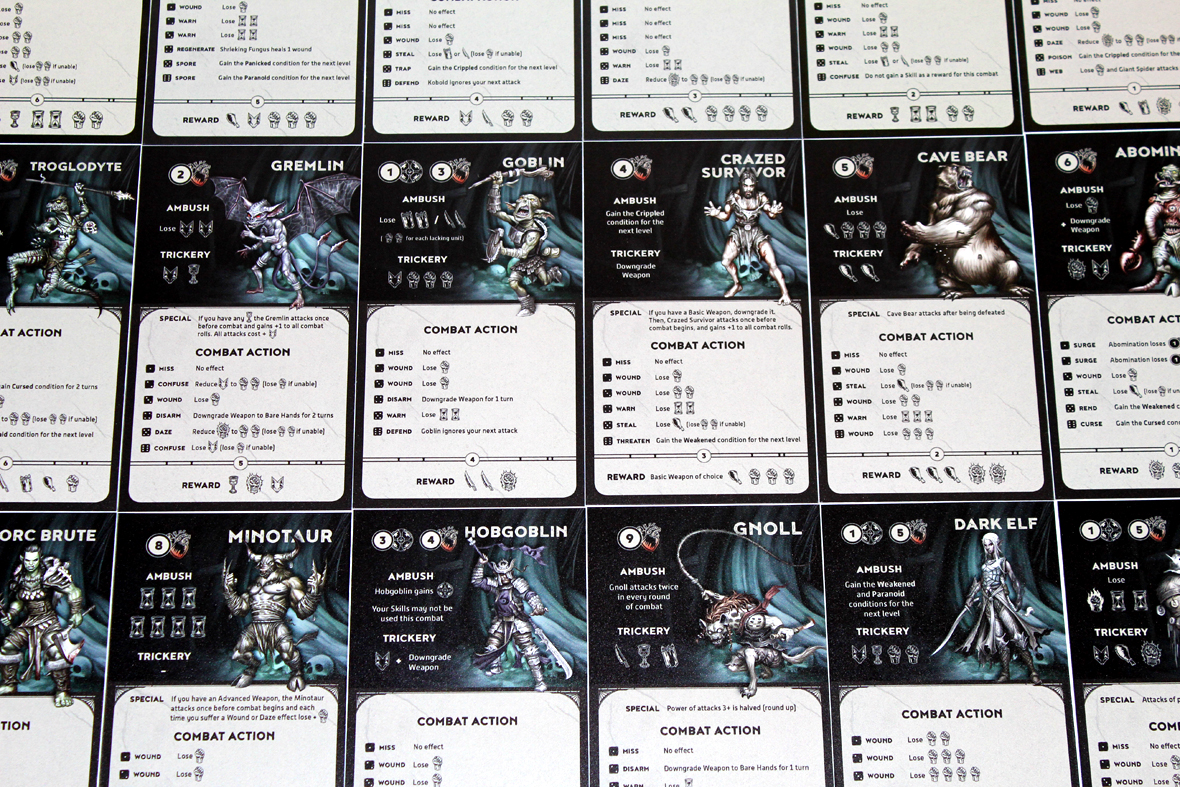 Finally, go through the Weapons cards and pull out Bare Hands: 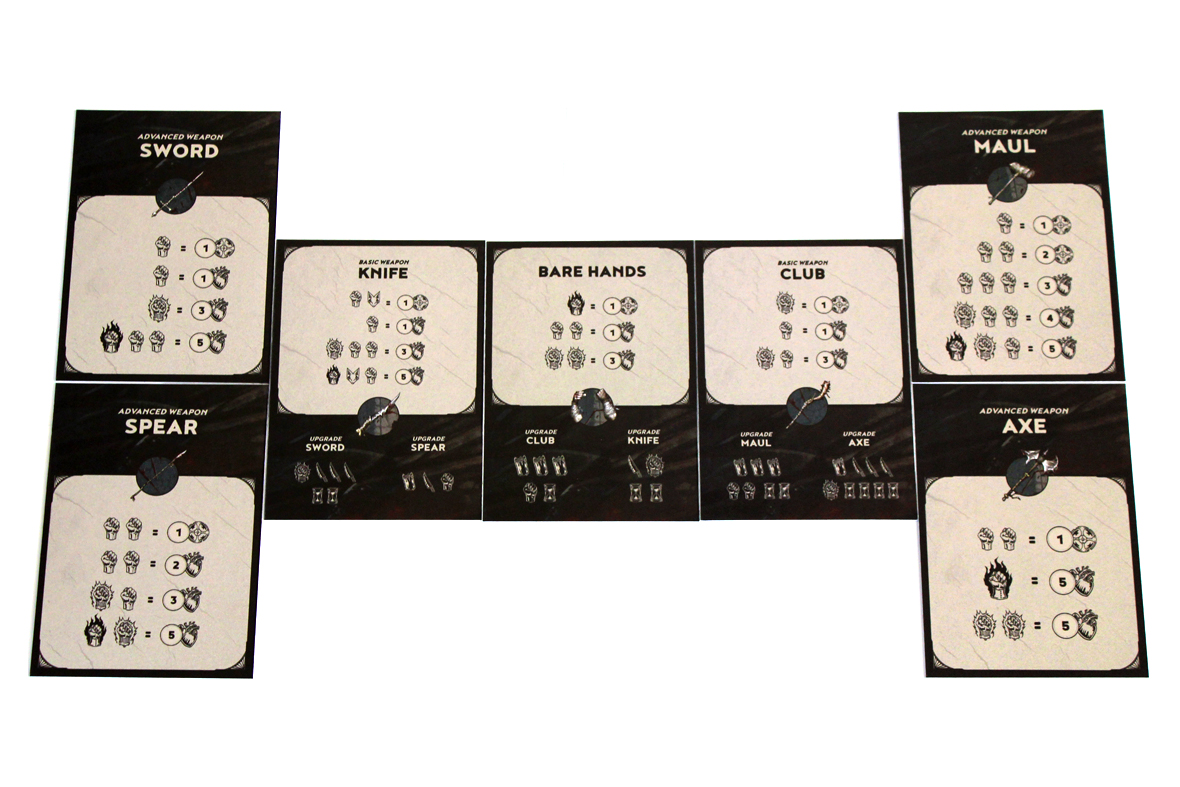 That’s all you’ve got to fight with, currently, but you might be able to make better weapons later on. Once you’ve done all that, move the token on the “Effort” tracker (for me it’s a fist icon; no idea what it’ll be for y’all) to the 13.

Either way, you’re ready to get started! 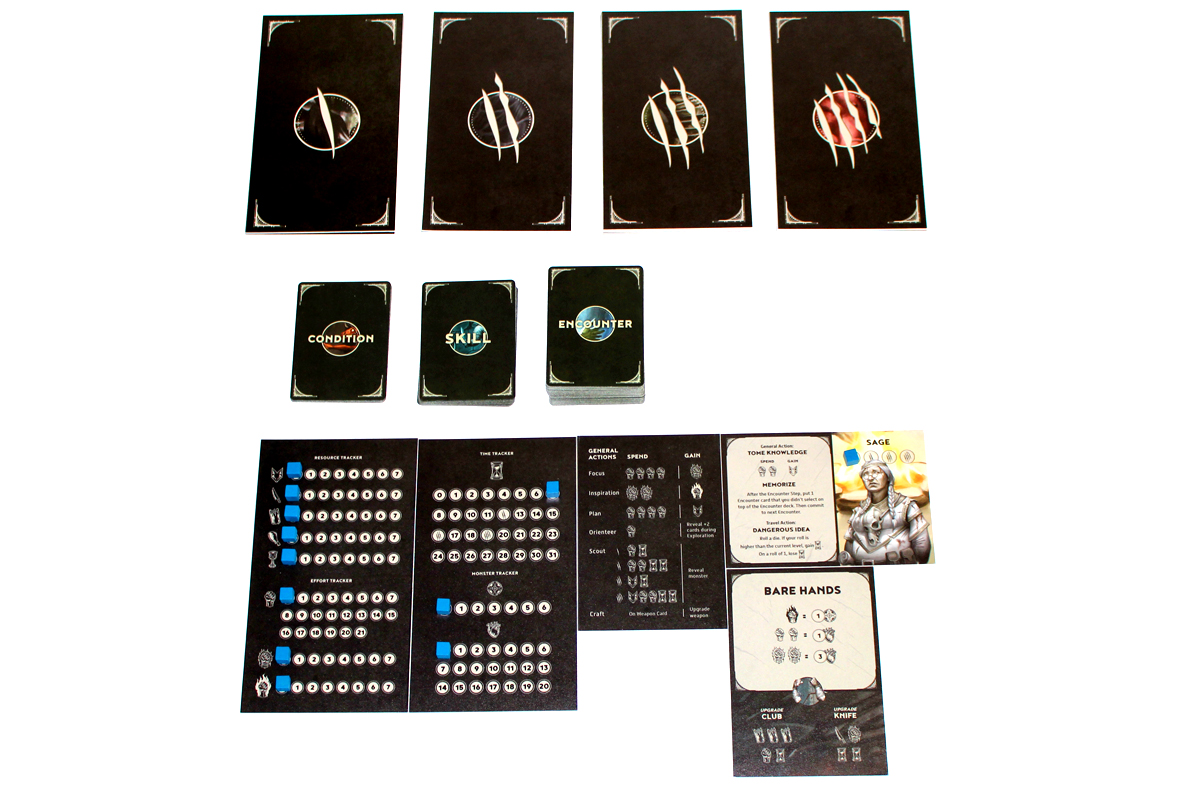 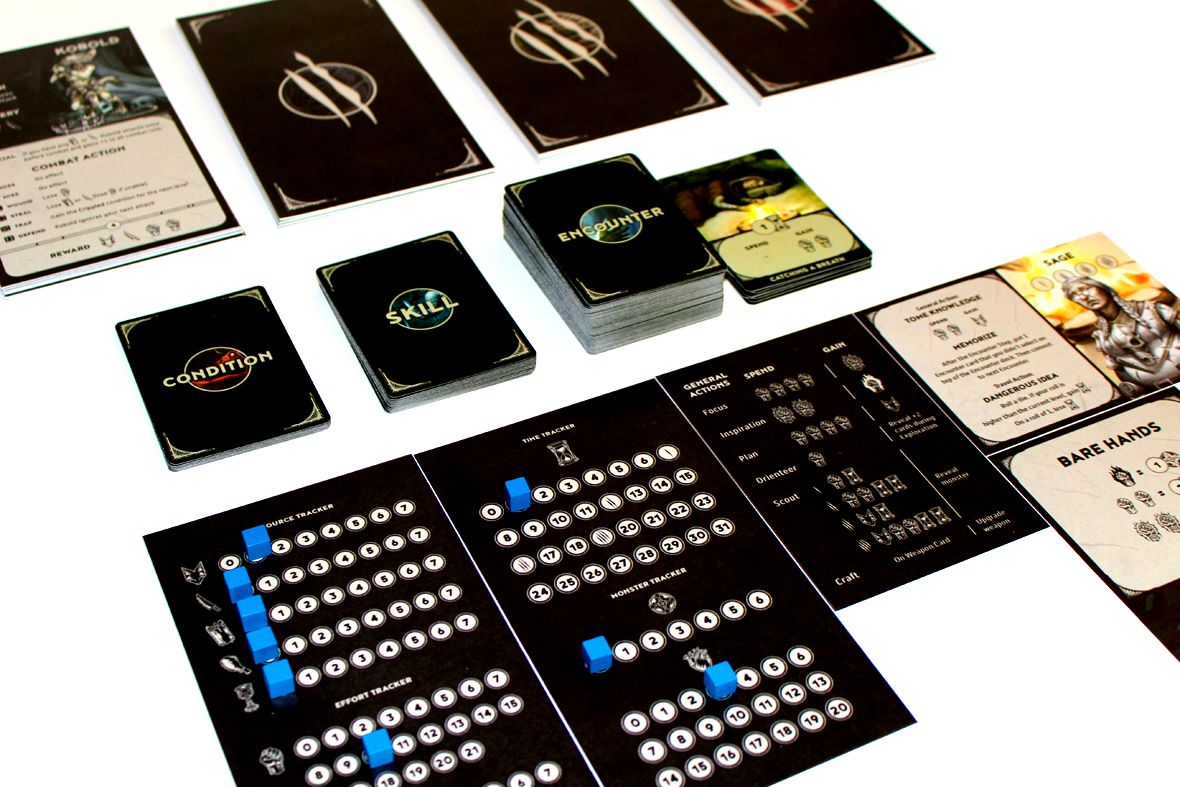 The game is broken up into two phases: Travel and Combat. I’ll cover each in turn.

During the Travel Phase, you try to get to the next level of the dungeon, only to realize it’s blocked by a monster. Well, you don’t quite know that yet. During this phase, you basically take “turns” where each turn proceeds as follows:

Combat also has a few steps. Either way, if the Monster hasn’t been revealed yet, roll the die and flip over the Monster corresponding to that number for your current level. Also, move the Time marker to the next level’s starting value. Certain actions Monsters can take will cost you time, and if you’re really unlucky you might get immediately ambushed again! If you’re fighting the Monster of Level IV, remove the Time marker from the board. This is your final battle. 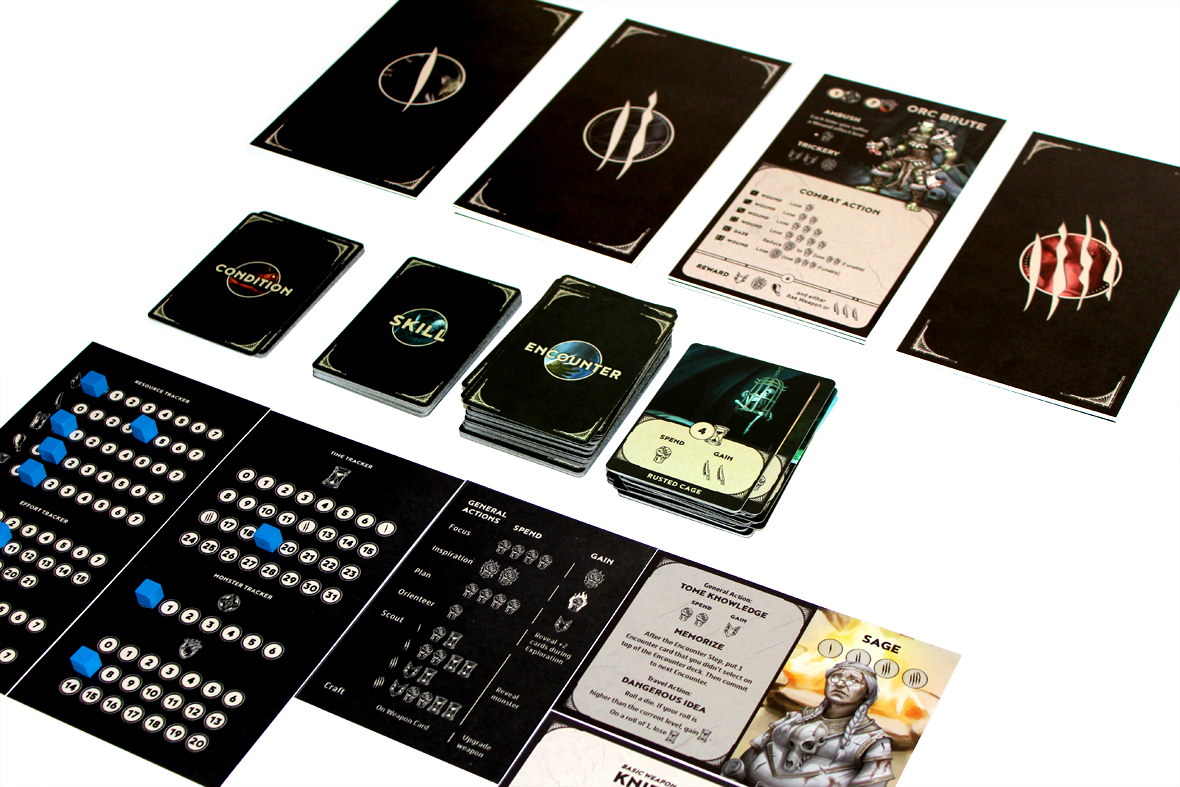 So the game ends in one of two ways:

If you won, calculate your score by looking at your remaining resources:

When you’ve gotten your score, first, tell me what you got! I’ve only won like, once. Second, check this chart: 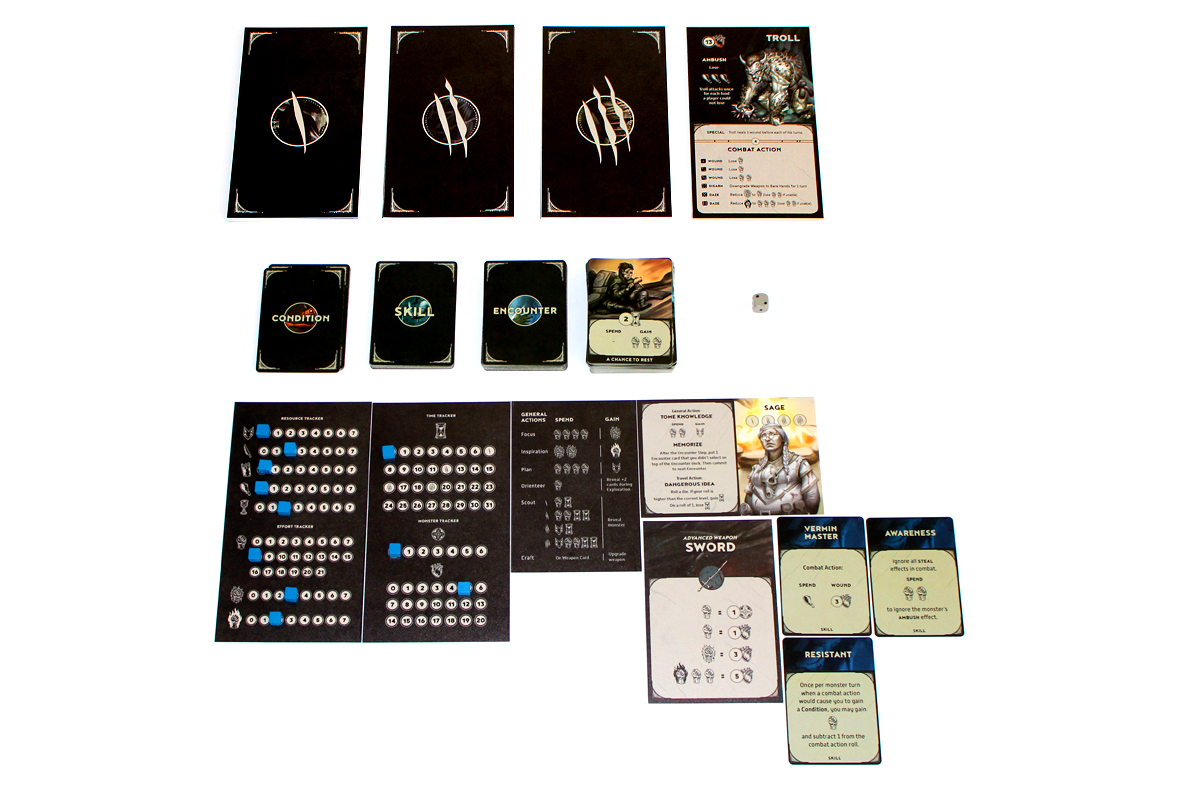 Overall, Unbroken is a solid and reasonably fast solo game! It’s a bit less space-conservative than Herbaceous (one of my go-to solo games), but it’s definitely a solid one, especially if you like dungeon crawlers or survival horror! Once you get it, you kind of immediately want to play it again to see if you can get a better outcome than you got the last time (though I won my first game and lost the subsequent four, so that didn’t work out), which is a great feeling when you’re playing a game. I can see this being a cool game with a lot of ways to expand outward, and if you or someone you know are looking for a good solo game to dig into, this might be a cool one to check out!