Full disclosure: A review copy of Outpost: Amazon was provided by IDW Games.

And we’re back with more games from IDW! Next one up is Outpost: Amazon, the sequel to Outpost: Siberia!

In Outpost: Amazon, you’ve been working out in the rainforest for a while and it’s alright. Some inexplicable things have been happening and there are some really weird videos showing up on the security feed, but other than that everything’s pretty normal. Then, one night, you’re awoken by someone telling you that it’s time for y’all to get the heck out. That said, you’re an extremely curious scientist, and you’d be really missing out on an opportunity if you didn’t collect some samples on your way to the rescue ship. Will you be able to make it out alive? Or will curiosity kill the you?

So, for setup, there are a few types of cards you should familiarize yourself with. First, give each player a character:

Now, give each of them a health marker token; they should place it at their maximum health value.

There are three types of cards — Threats, Good Events, and Bad Events:

Threats are monsters you’ll want to kill or capture as you try to escape your outpost:

Good and Bad Events are just things that … happen, along the way:

So, take some of the Good and Bad Events and shuffle them with the Threats to form the Expedition Deck:

Set the Expedition deck face-down in the play area, with the purple side of the card back facing upwards. Shuffle the remaining Events together to form the Outpost Deck, which you’ll place above the Expedition deck, green side of the card back facing upwards. Give each player a card from the Outpost deck; that’s gonna be their hand. You can keep that face-up by your Character if you want; there are no secrets from people fleeing the Amazon together.

Last thing — place the Cage cards to the side, but take the Starting Cage (capacity 14) and add it to the center of the play area. We’ll call this area the Supply.

A game of Outpost: Amazon is played by exploring the rainforest around you and capturing or killing the wildlife until you’ve exhausted the Expedition deck. If you can survive that long, you escape! If not, well, you die. That’s a bit of a bummer, so try to avoid that.

The game is played over multiple rounds, each consisting of a player turn with several phases. I’ll go over each in turn.

During this phase, you’ll draw three cards from the Outpost Deck. In order, you must:

This means if you were ever to be forced to draw fewer Outpost cards, you’d only be able to discard one, first, then keep one in your hand. That’s a bummer.

Cards drawn from the Outpost deck will end up in your hand or in the Supply. In your hand, you only focus on the CV of the card (its Combat Value). You can only use cards from your hand to attack monsters.

Cards placed into the Supply can only be used for the green effect on the “top” of the card. They can be used by any player on their turn, and are then discarded. You cannot use cards in the Supply to attack monsters.

The Supply is limited to 10 cards (including cages). I assume if the Supply is full, you may choose which card gets discarded: one from the Supply, or the one you just drew. Up to you! 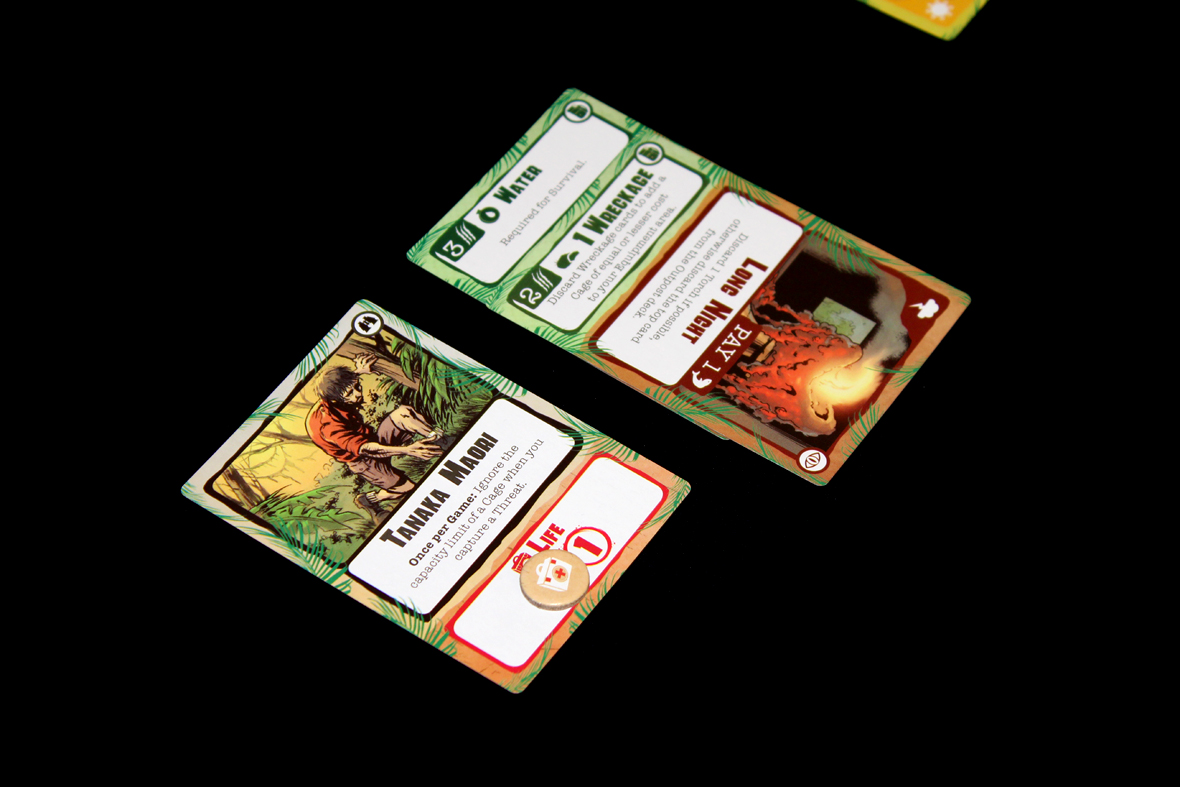 If you’d like, you may discard cards from your hand to attack a monster that’s currently face-up. If there are no monsters, you cannot attack any, tautologically.  When you attack a monster, slide the card you used underneath of it so that its CV is visible. If you ever have cards behind a monster such that the total CV of the cards is greater than the monster’s health, you’ve killed it! Discard the monster and the cards used to attack it to the Outpost discard pile (you’ll be able to use what’s left of the monster as resources on subsequent turns; so handy). If you’d prefer to capture the monster, rather than kill it (playing too much Yokai Septet, I imagine), keep reading.

You may use any of the Equipment in the Supply to accomplish tasks. There are only four types (Food and Water cannot be used in this phase), and they do different things:

You are not required to use any equipment, even if there is some present.

You didn’t think this was a fun trip to the Amazon, did you? Like The Amazon Trail video game? No, it’s not.

Flip the top card of the Expedition deck. Resolve it as follows:

If nobody died, play continues. If you have now run out of cards in the Expedition deck, you win! More on that later.

Turn your character sideways. All this exploring has gotten you tired. Now, another player gets to start their turn, with one caveat. Again, if a player got attacked during your turn, they go first.

Again, if any player takes damage such that they’d drop to 0 (or lower) Health, they die and all players lose! If you ever have 5 monsters active at the end of a player’s turn, you also lose. Otherwise, once the Expedition deck runs out, you win! Count the HP of the creatures you captured and compare it to this handy chart to see how you did:

So the game is kind of all over the place based on player count, because there’s no real adjustment made beyond “you have more characters”. I find that makes it hard to keep players engaged at high player counts, since the turns aren’t long, per se, but they’re not terribly interesting to watch and there are a lot of them. Also, the game feels significantly easier at six, as you can distribute more damage and just kind of have certain characters tank the game. At two, it’s just hectic. Not unwinnable; just hectic. I’d probably say that if I were to put a sweet spot on it, 3 – 4 players seems about right. That said, your mileage may vary.

Overall, uh, Outpost: Amazon isn’t really for me. I brought it to one of my favorite game groups (if not my favorite game group) and played it with one of my favorite people to game with and both politely requested that I not bring it again. At six, we had no fewer than three players completely tuned out on it; they weren’t engaged by the mechanics or the content and the game was so simple that there wasn’t much of a point for them to be engaged. With one other player, we were so consistently up against a wall that it was hard for us to do anything beyond survive before we eventually lost or barely won (both times, or we lost one and won one). Neither loss was particularly satisfying, either, which made them all the more frustrating. It didn’t help that a number of players were confused by the multi-use cards and the theme wasn’t really clicking for them. It seems like four players may be the right target for this game to keep it balanced between letting all players be engaged but without it being overwhelmingly difficult, but that’s … odd. Oh well. If you like survival horror or are fascinated by what you think might be lurking in the jungles of the rainforest, you’ll hopefully have better luck with Outpost: Amazon than I did!