Full disclosure: A review copy of Einstein: The Genius Expansion was provided by Artana Games.

Whew, getting expansions reviewed is difficult. I forgot how long it takes to get a game group comfortable enough with the base game to want to try the expansion, and how long it takes for me to get comfortable enough with a game to want to try the expansion. I just recently polished off Dokmus: Return of Erefel, and now we should dive into another expansion I got around the same time for Einstein: His Amazing Life and Incomparable Science, my current contender for Longest Name of a Board Game I Own.

In The Genius Expansion, you’re gonna dig in a bit more to the strategy side of Einstein, with an entirely new scoring system, some new cards, and new rules. Will you be able to make Einstein proud of your knowledge and mastery of chemistry, math, physics, and philosophy? Or is your success purely theoretical?

The game is generally set up like the base game, but with one major exception and a few major additions. The first one you’ll notice is that there are four new Einstein cards; give each player one:

You might not notice the difference (I didn’t, at first), but they each have a symbol corresponding to one of the Scoring Cards that gives them an extra point in that category. More on that later.

Instead of giving each player their own deck of Inspiration cards, set the Inspiration card decks for all players in the center of the play area, and flip one card face-up in front of the decks. Also do the same for the Major Theory cards, and the new Insight cards:

Take the new scoring cards for each category and add them near the player area, as well:

Now, each player makes a hand of three cards: one Insight card, one Major Theory card, and then one Inspiration card in their color. That’s about all the changes! The Youngest Einstein will again start by adding two tiles of theirs to the Big Idea in the center. 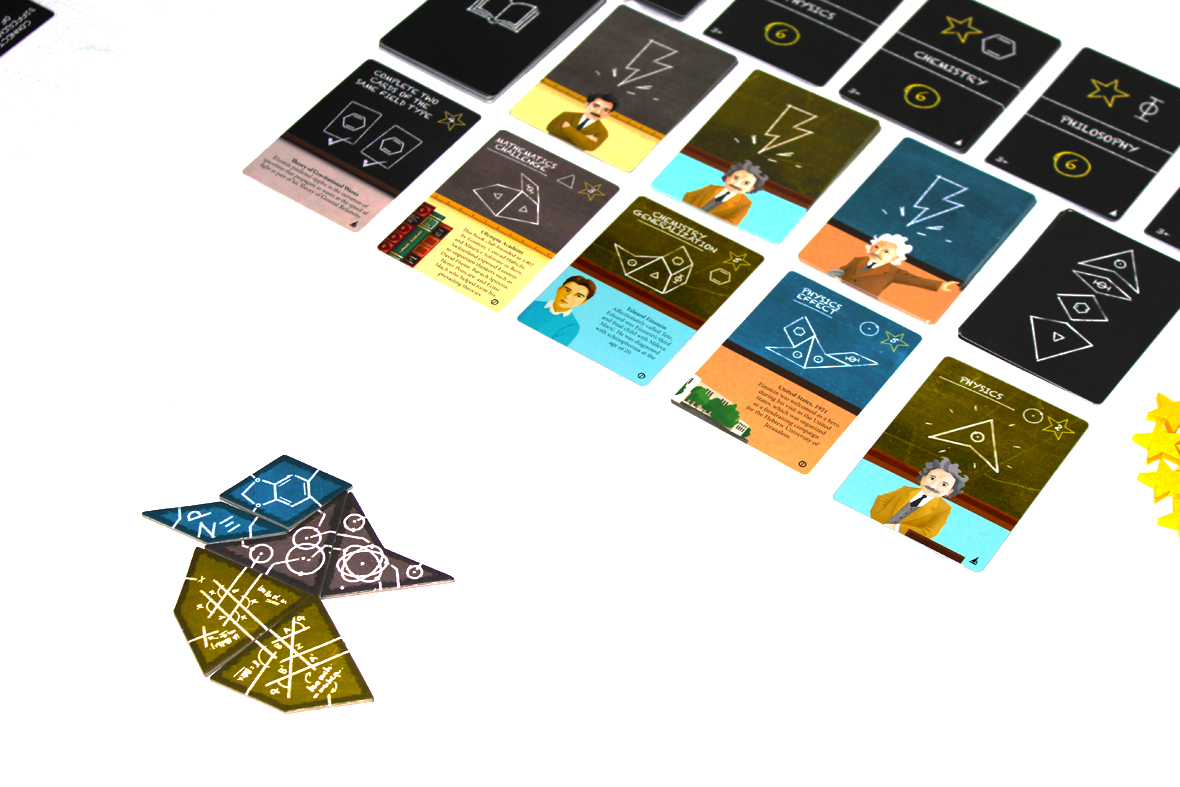 The game plays fairly similarly to the base game, as well, but there are some major scoring differences to keep in mind.

As in the base game, you play two tiles from your area into the Big Idea in the center, connecting them to other ideas that are already in play. Unlike the base game, however, once you run out of ideas of a certain type you may use another player’s ideas of that type, if you’d like. 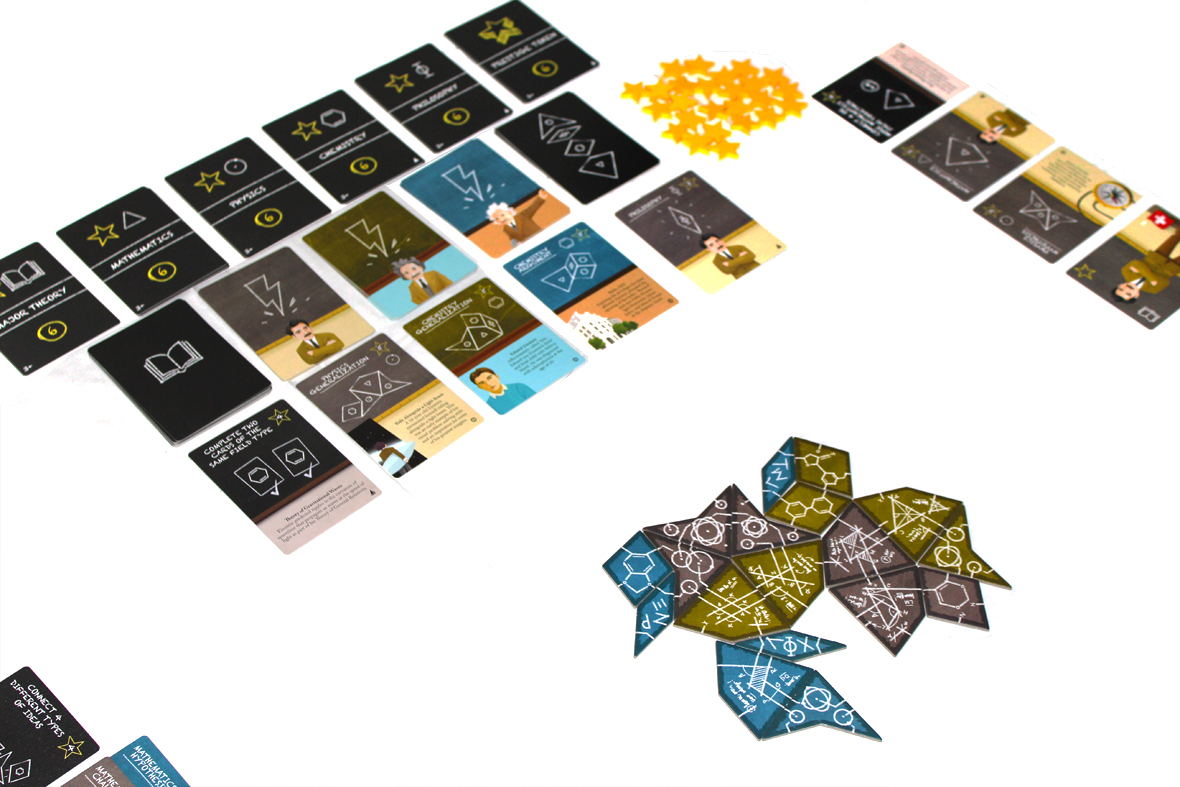 Once your turn ends, you may discard any number of cards from your hand (by returning them to the bottom of their respective stacks) and draw any face-up cards you’d like. Once you’ve done so, you may refill the missing spots. You cannot take from the deck, normally; only from the face-up cards.

Play continues until any two stacks of cards are depleted or any one player has used up two types of tiles in their area. Once the oldest Einstein (the last player to start) finishes their turn, go to scoring. 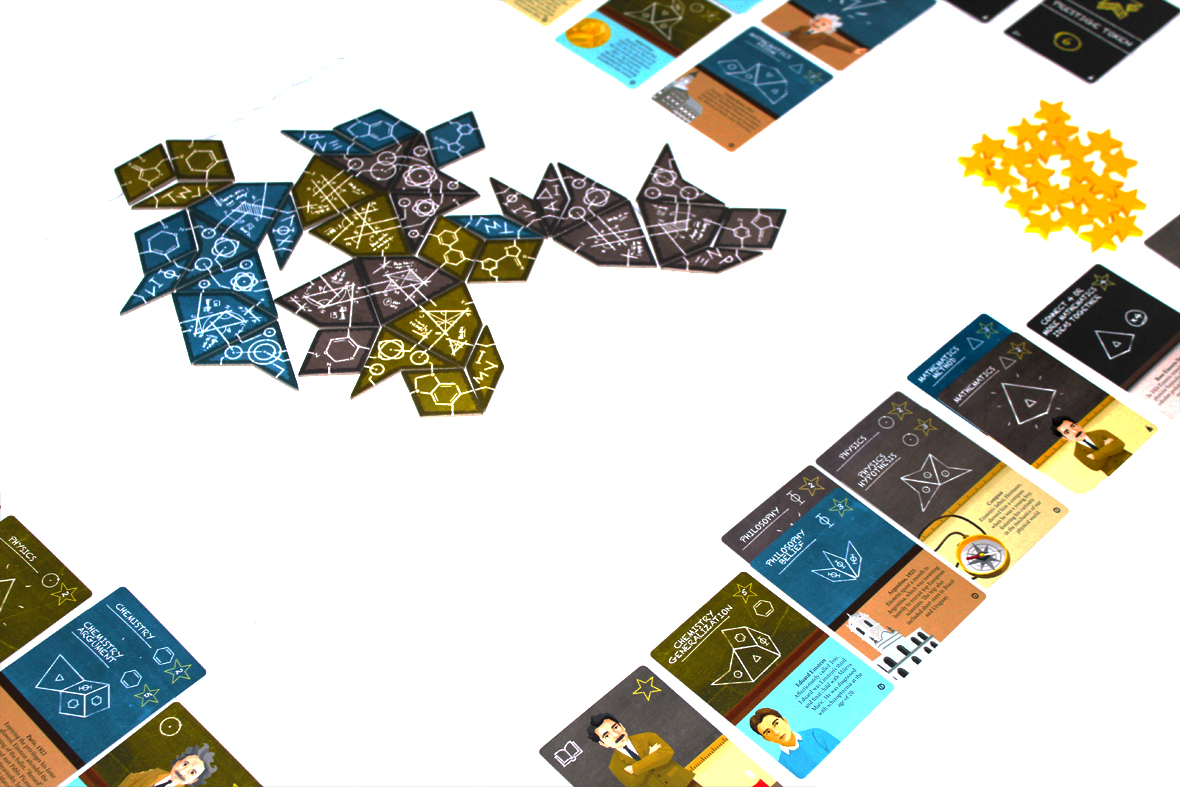 So, last up, you notice how there are four types of Insights and Inspirations? They match four of the types of scoring cards: Mathematics, Physics, Chemistry, and Philosophy. Similar to Major Theories, add up your totals for each category and assign Scoring Cards. 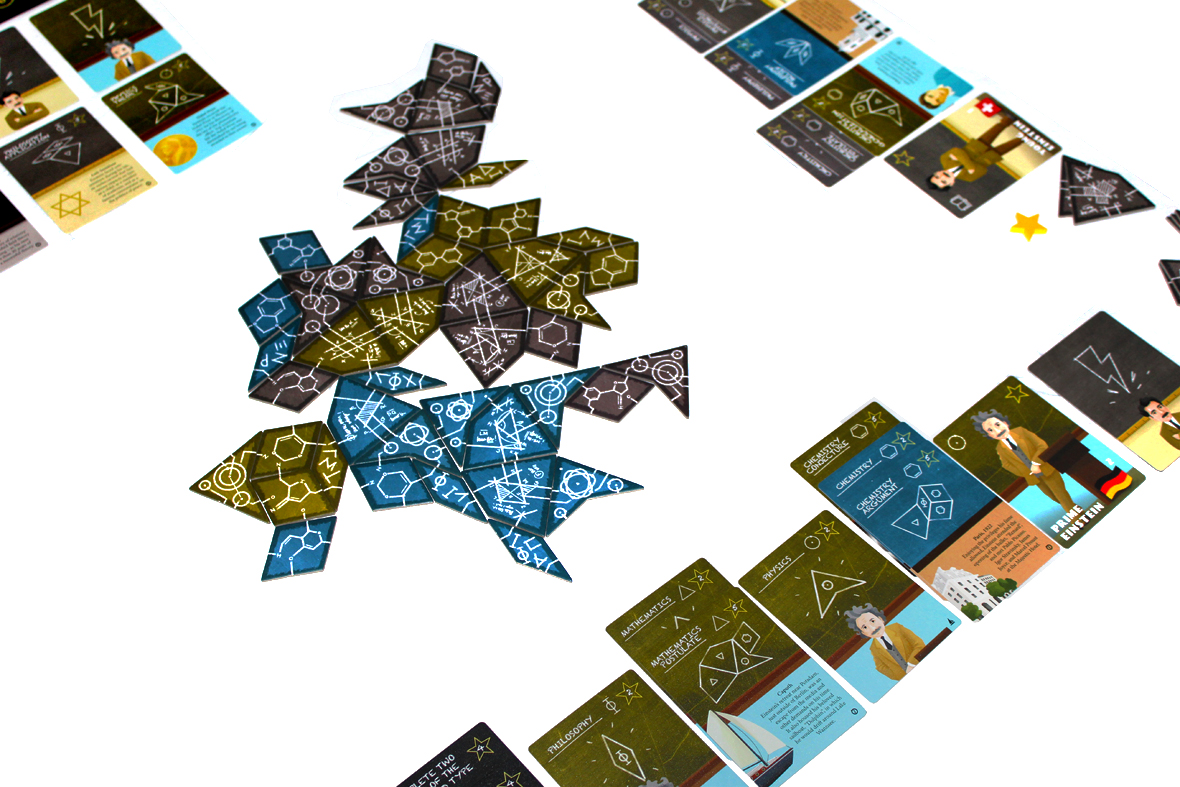 Once you’ve done that, add up your total score by summing your (hopefully six) Scoring cards. The player with the most points wins!

The major difference in player count is the increase in Inspiration and Insight cards. It also lets you spread points around a bit better by giving you more options as to the player you want to give Prestige Tokens to, as opposed to the zero-sum game at two players.

I have a bit of a soft spot for four players, but I don’t have a ton of preference for player counts, here.

The strategy from the base game isn’t too dissimilar, but the major scoring changes create new incentive structures, so I’m adding new stuff here. Your mileage may vary with the base game’s strategy tips.

Overall, The Genius expansion is a really good expansion! It lets the game occupy two spaces; in one, it’s a family-weight game with some nice semicooperative components, and in the other, it’s a light strategy game with some interesting zero-sum scoring mechanics and a lot of decisions. It’s not quite hitting The Lady and the Tiger with its preponderance of different games in the same box, but it’s a good angle for it to strive for. Naturally, Kwanchai’s art is always a welcome addition, as well. I’d be kind of interested in seeing a few more family games try out something like this as an expansion, as the additional game (essentially) in the same components seems like the kind of thing people might be interested in. It honestly is an expansion that I’ll usually suggest when the base game is played. If you’ve already got the base game and you’re looking for ways to make it feel a bit more strategic, this will definitely do that, in my opinion, and that’s a cool angle for an expansion to go for.