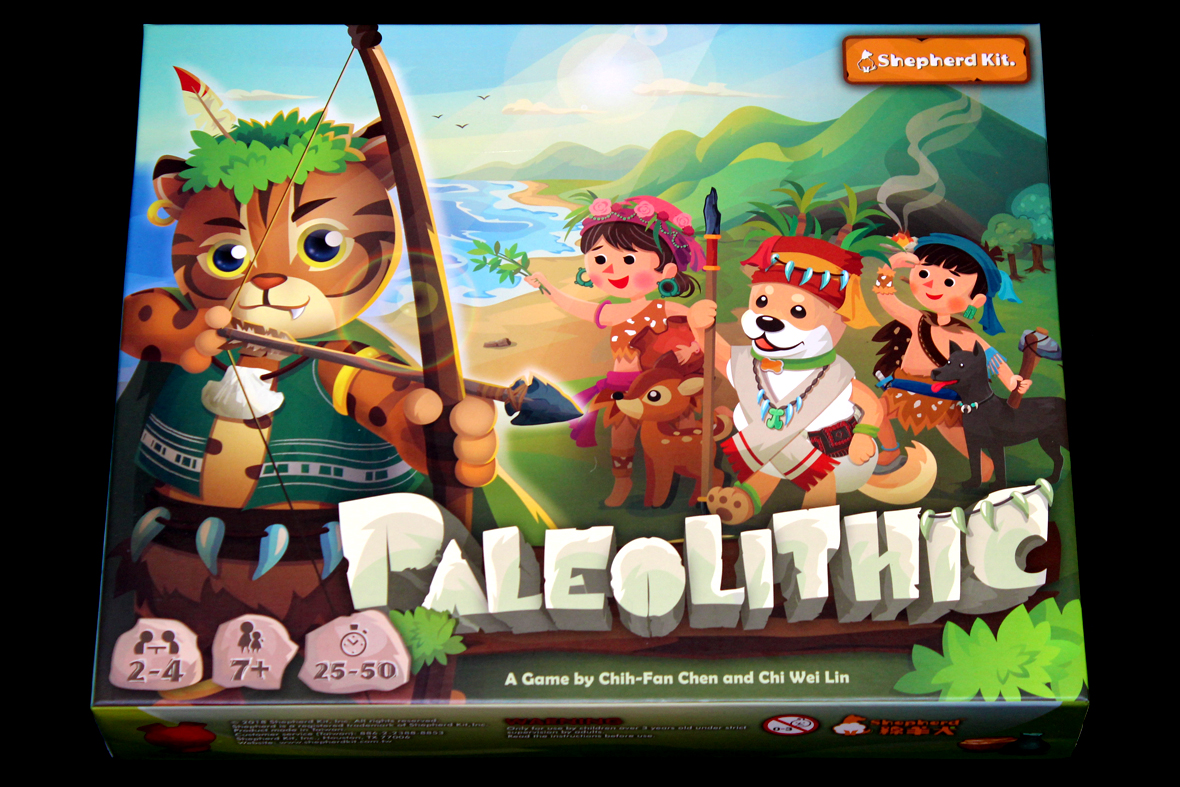 Full disclosure: A review copy of Paleolithic was provided by Shepherd Kit.

It’s always exciting to get a chance to check out games from outside the U.S. / Europe, and this is no exception! Previously, I had tried some of the Emperor S4 games from Taiwan (that have since been brought over by Deep Water Games), but these are entirely different, as they’re targeted towards a slightly younger audience. As a fan of lighter games myself, I’m still interested.

In Paleolithic, you play as tribes in prehistoric Taiwan hunting, gathering, and creating to try and establish yourself as the Great Elder of your people. With a simplified worker placement mechanic designed to appeal to newer players and bright, colorful art, it’s definitely a fun game on the table, but how does it hold up to some play? Let’s find out!

Setup is moderately straightforward. One helpful thing is that the board is a 4-piece puzzle:

So it shouldn’t take that long to assemble. Every player should be given / assigned a player board:

Each one has a symbol on the board; that’s where you’ll start. Give a player all of the tokens in their color: 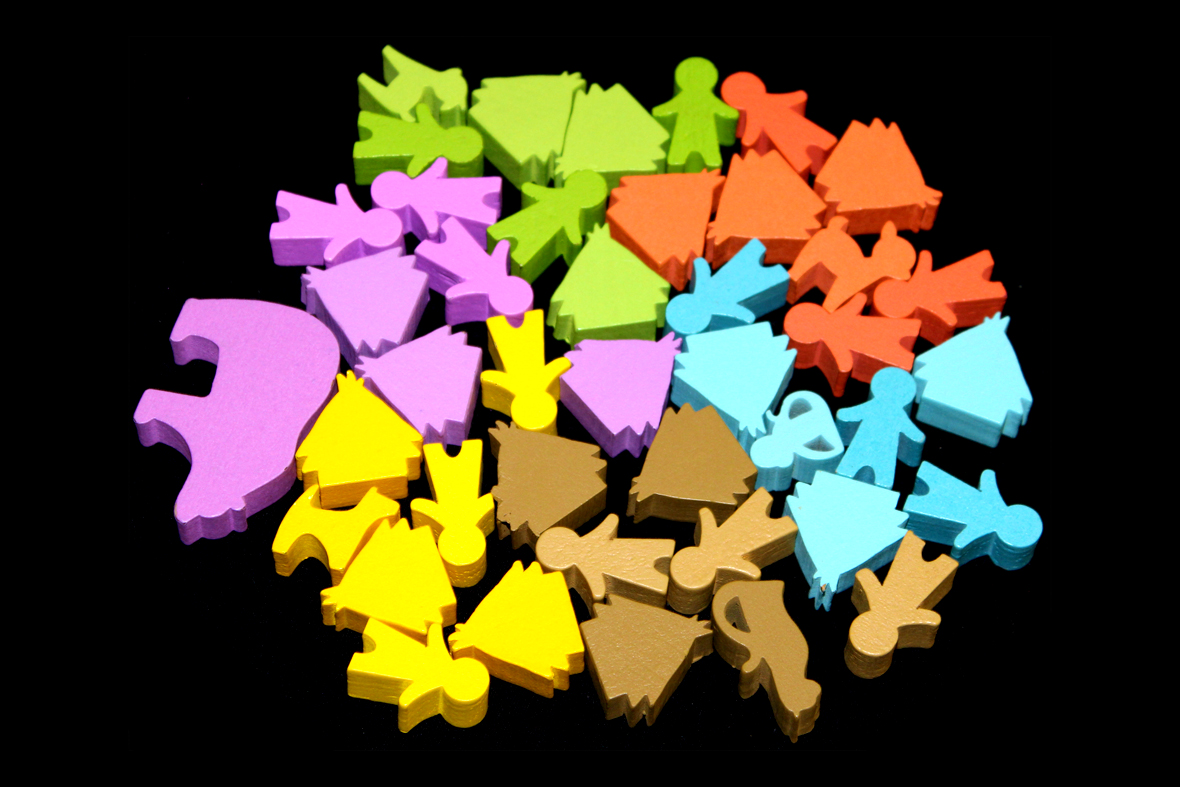 Place two cavemen tokens on that starting space, along with the animal. I’m not sure what you do with the third caveman. Maybe it’s in case the other gets lost.

You’ll want to set up the tribal stands and place the hut tokens in it so that your player board looks like this:

As for the tribal tiles, shuffle them up and place two face-up on the board: 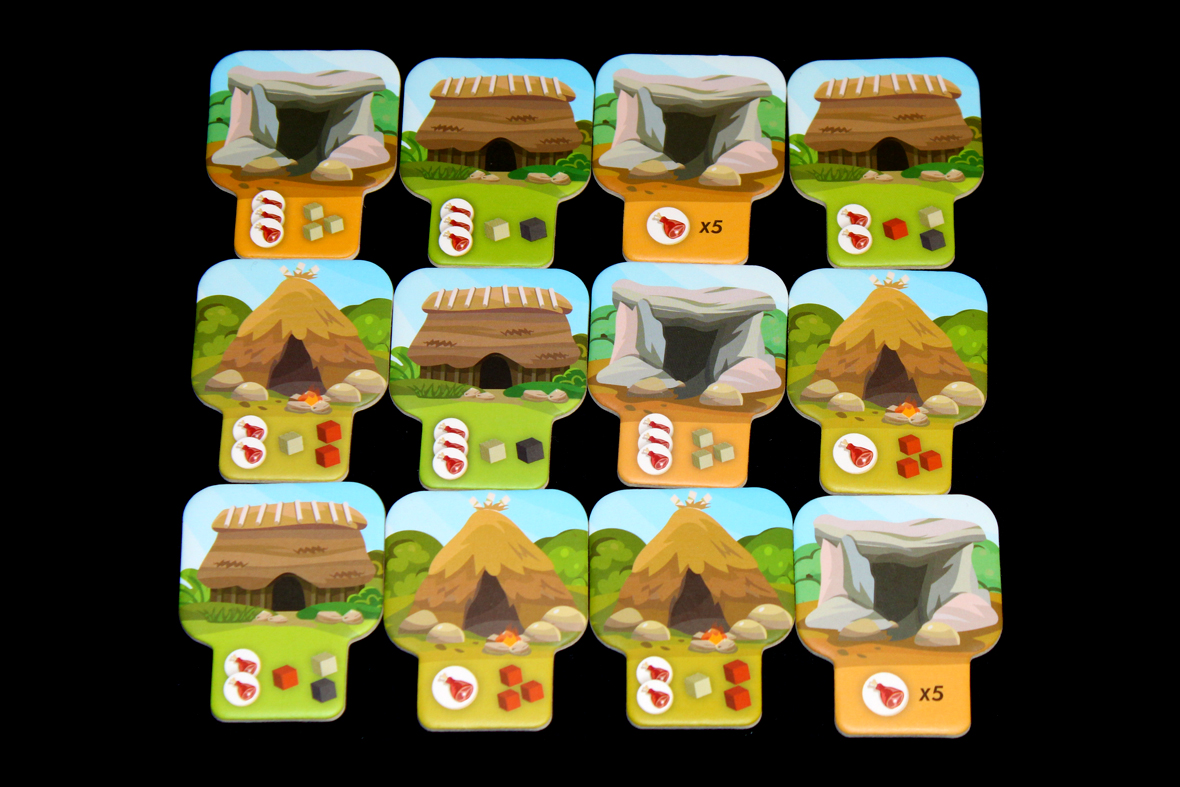 Shuffle the Artifact cards, and place five face-up on the left side of the board:

And add the resource tokens near the board:

You’re pretty much done! If you’re playing the basic game, you are done, but for an advanced game, also add in a Legendary Character:

You’ll put one of the cards on the space for it and then roll the dice, placing the Legendary Character on the space matching the sum of the dice. 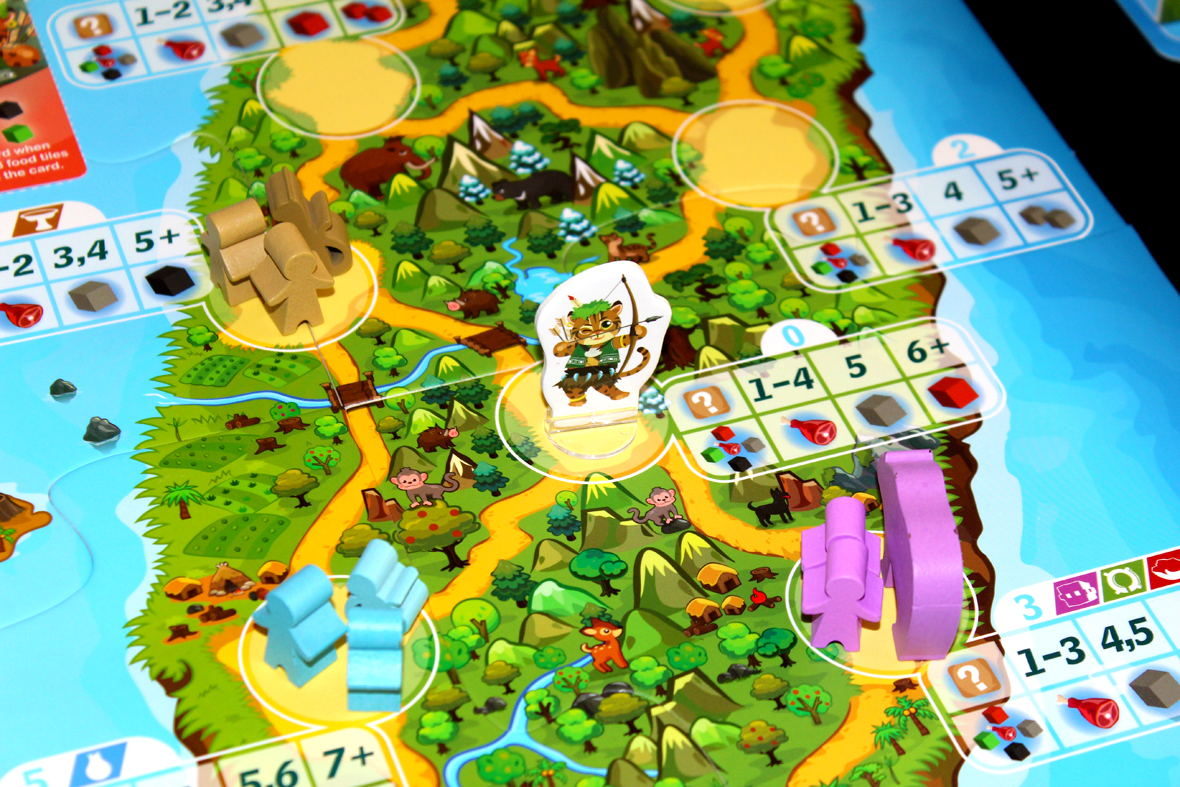 A game of Paleolithic is played over several rounds. Each round, you may either do the Explore or Workshop Action. Let’s talk about each.

During the explore action, you can do these two steps, in order:

That’s pretty much the whole Explore Phase. If you’re looking for a strategic variant / you want to slow the game down a bit, make it so that players must choose a location and roll for it, rather than getting resources from all locations. I find that this adds a bit of strategy to things, but your mileage may vary.

During the Workshop Phase, you may choose one of two actions: Produce Artifact or Build Tribe.

The Basic game ends whenever a player has 5 Artifact Cards and Tribal Tiles, and the Complete Game ends at 8. Once that happens, tally scores:

The major difference is going to be contention for Artifact Cards, since players want different combinations of types and you might be fighting against nearly everyone to get the cards that you want, which is definitely going to hurt you in the long-term. That said, at two, the board feels a bit empty, and it’s possible with some bad placement that nobody will ever use the Legendary Character (it spawns far away from both players). That’s always a bummer, but what can you do? If there’s too much overlap between the players’ needs then it’s also possible to get stymied by the cards; nobody wants to buy the card that’s not useful and potentially give their opponent a useful card on the flop, especially since both players have been hoarding resources. That stalemate isn’t great for anyone, so I’d probably recommend this most highly in the 3- to 4-player range to avoid those two things. 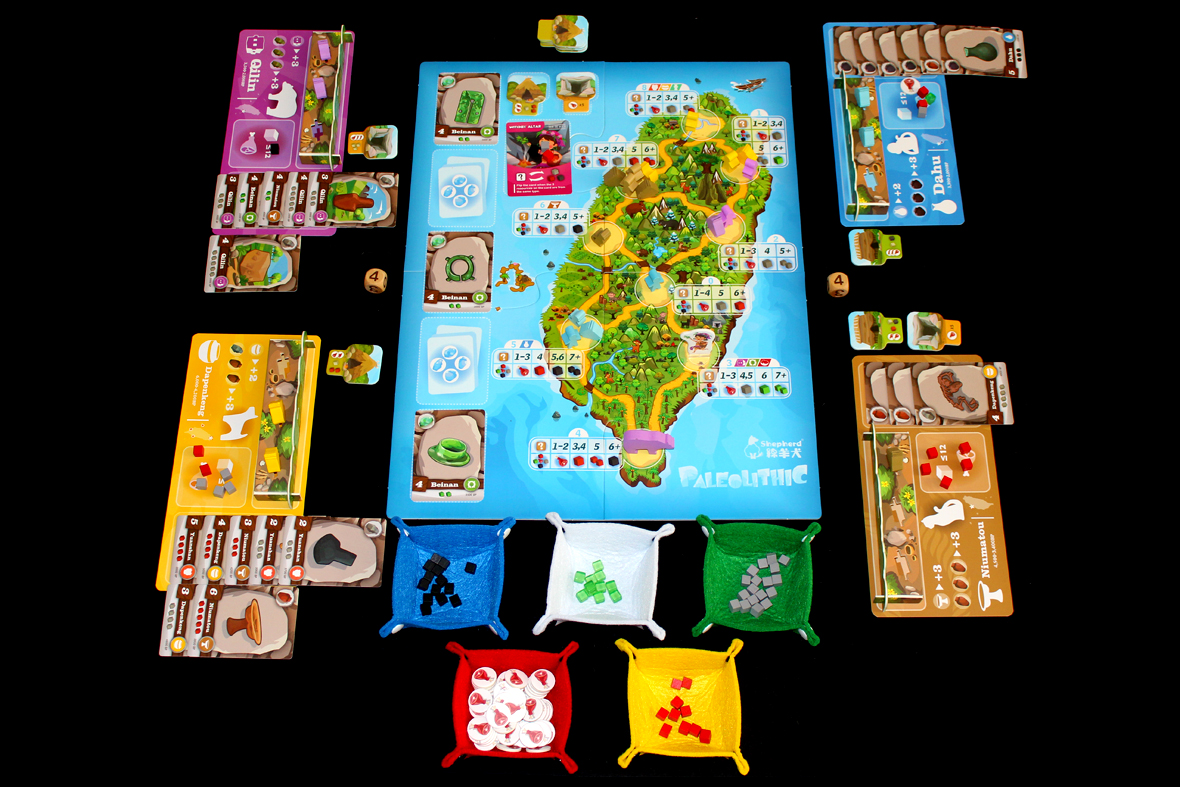 Overall, Paleolithic is fun! I think that I’d love to see it more widely available stateside, as a few of my friends that have kids on the younger end (slightly the older end of HABA) would be interested in this kind of game for their kids, and even when I play it I still have a lot of fun with it (probably due to the theme and great art). It’s got pretty solid mechanics, a nice runway for expansions (I say this with two expansions already in-hand), and a very unique theme, all of which make for a very pleasant and positive gaming experience. I’m hoping that the expansion components add a catch-up mechanic and a way to cycle cards more easily, because those are my only two main areas that I’d like to see improvements. Either way, if you’re looking for a lighter spin on worker placement-style games or you want to check out games with a unique theme, I’d suggest trying Paleolithic!