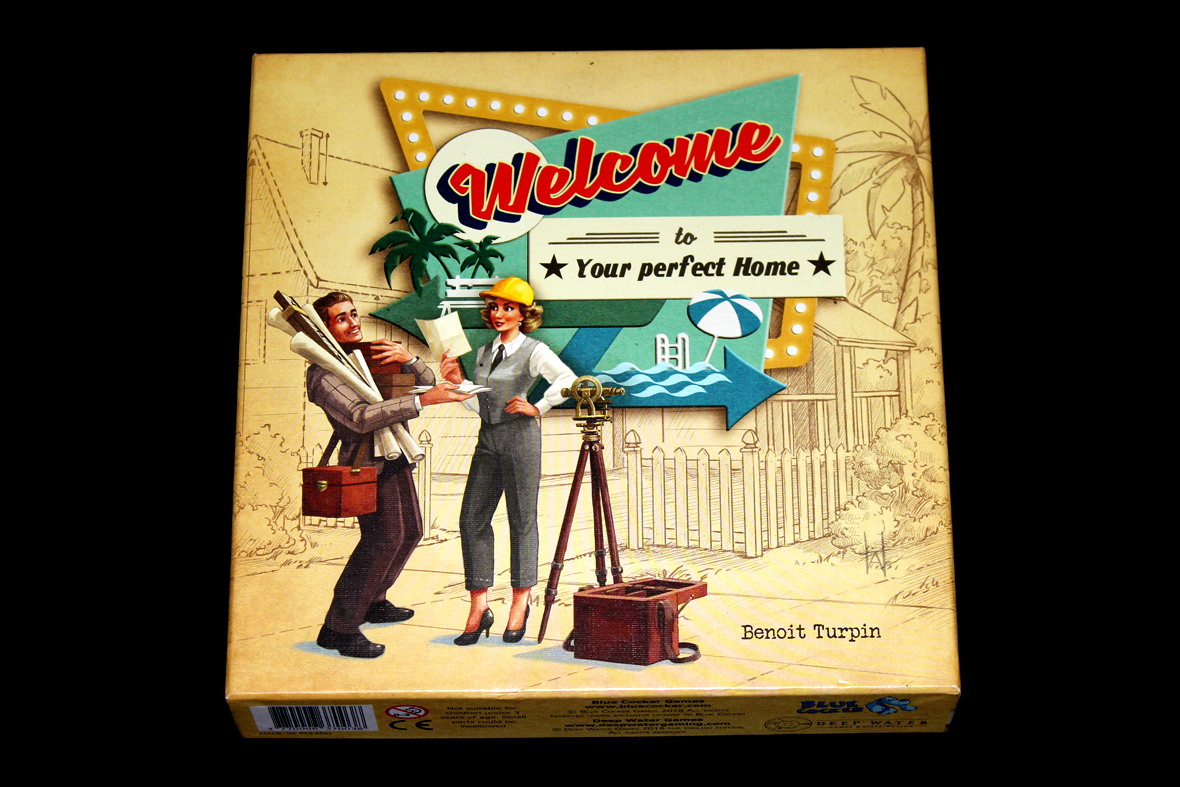 Does this count as a Gen Con game? I’m really losing track on the consistency, here, and we’re getting into Essen releases, also, anyways. Things are pretty much only going to get more confusing before the year’s out, I guess. Either way, this arrived in my mailbox the day before I left for Gen Con, so, I’m going to say it definitely counts. I mean, I kind of make the rules, here, so why not.

Anyways, in Welcome To…, one of the newest titles brought to the US by Deep Water Games, the US publisher of other favorites around the blog like Mystery of the Temples (and Herbalism, which I also enjoyed). Outside the US, Blue Cocker’s got it. Your goal in this is to build the single greatest town in the 1950s by … aggressively numbering houses. You’re going to have to do more than just that if you want to be successful, though. You should hire landscapers, pay some real estate agents, and definitely build some pools. Literally, build a ton of pools. Do nothing else. Will you be able to bring home a victory?

Only a few things to do, here. Give everyone a sheet: 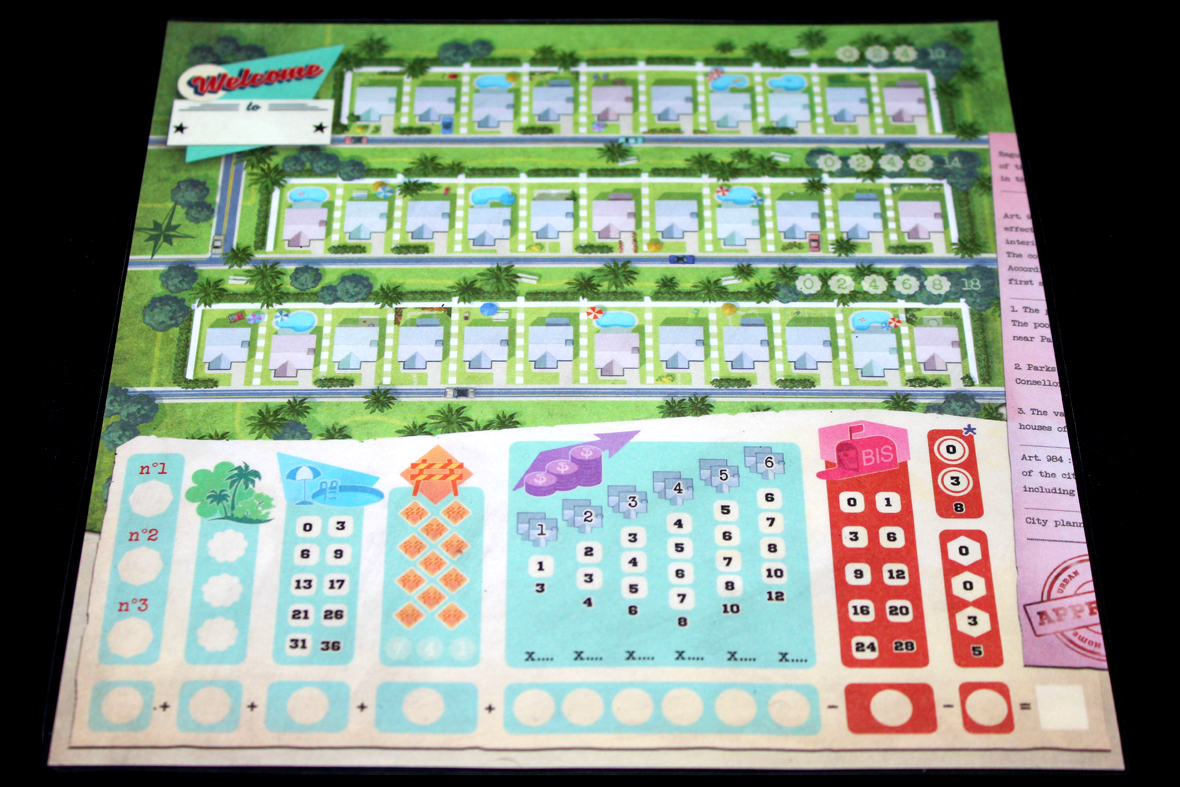 Shuffle the cards and set them in three piles of the same size: 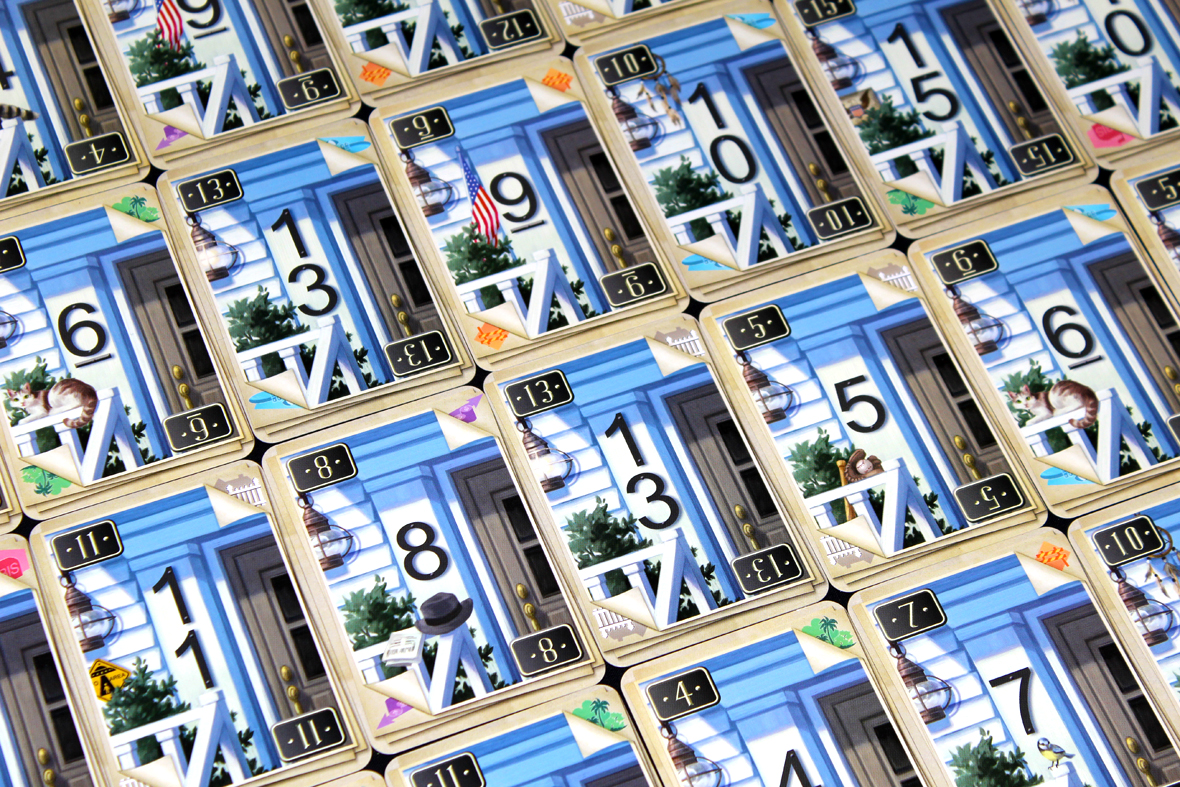 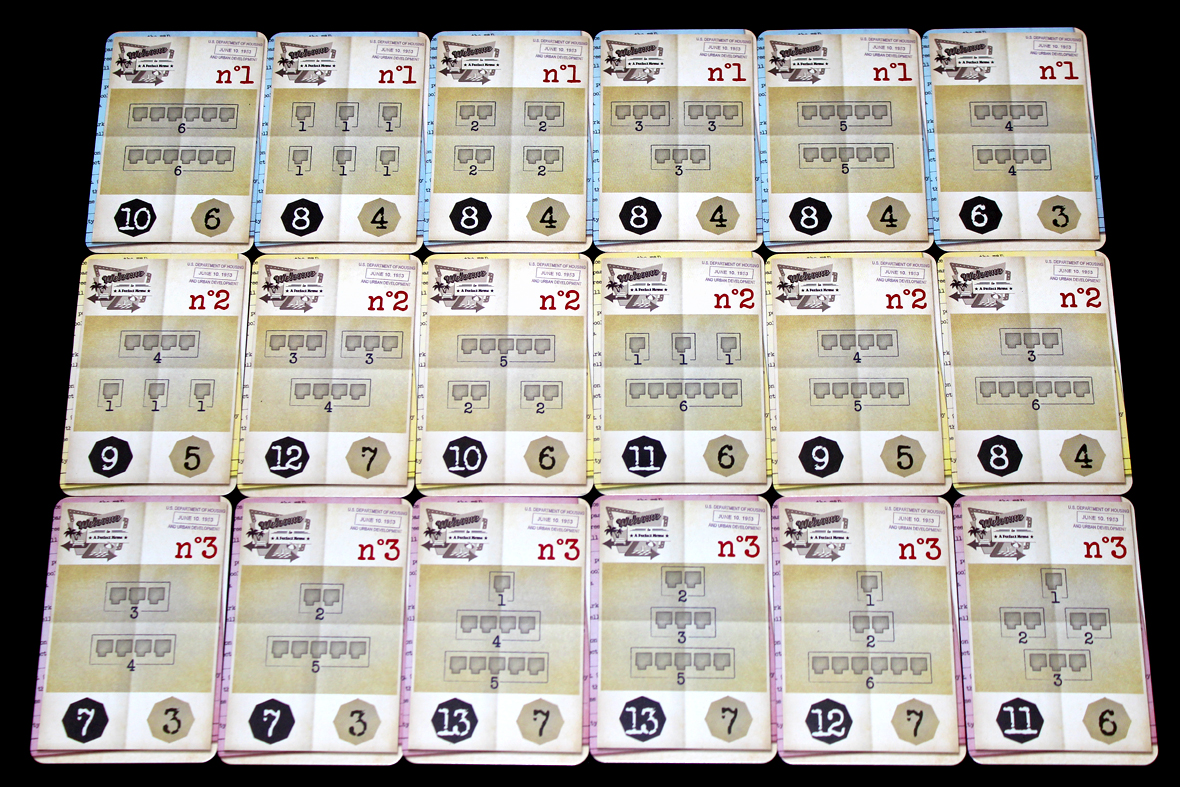 And the Advanced Game has other, different ones: 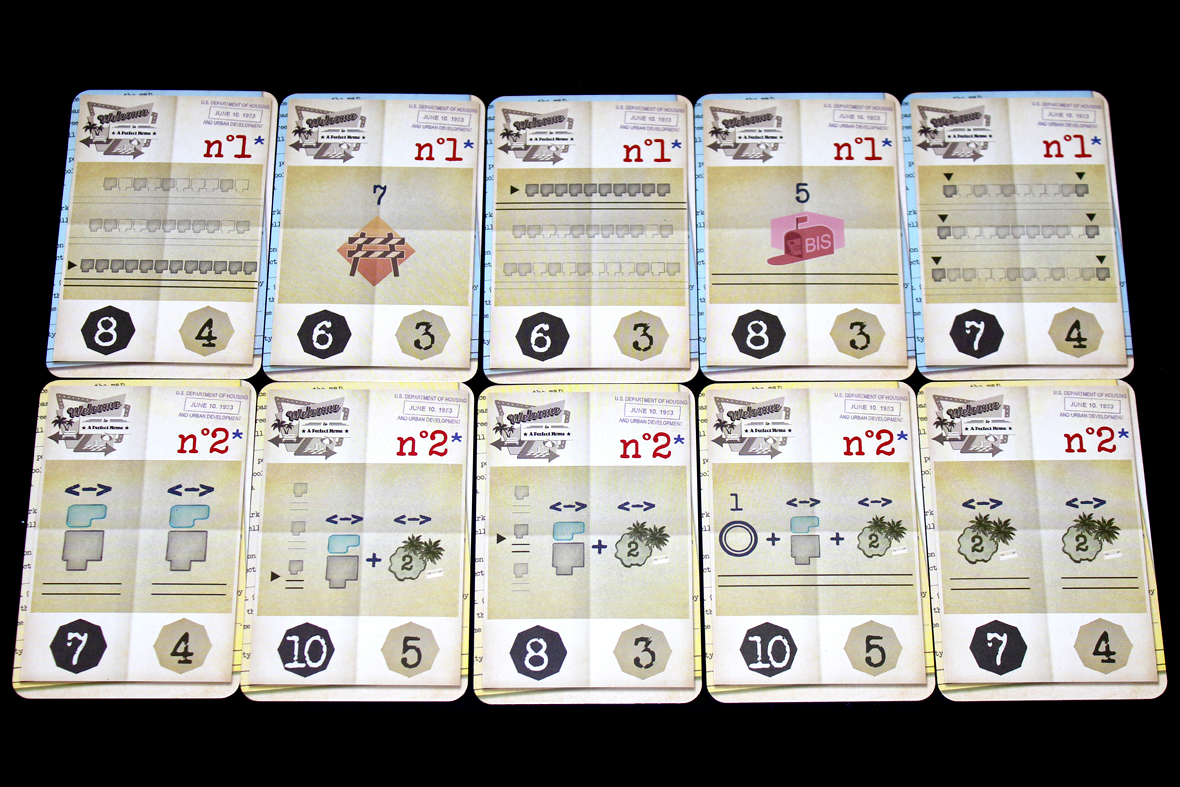 Choose one each of Blue, Yellow, and Red, and reveal those. Once you’ve done that, you’re ready to start! 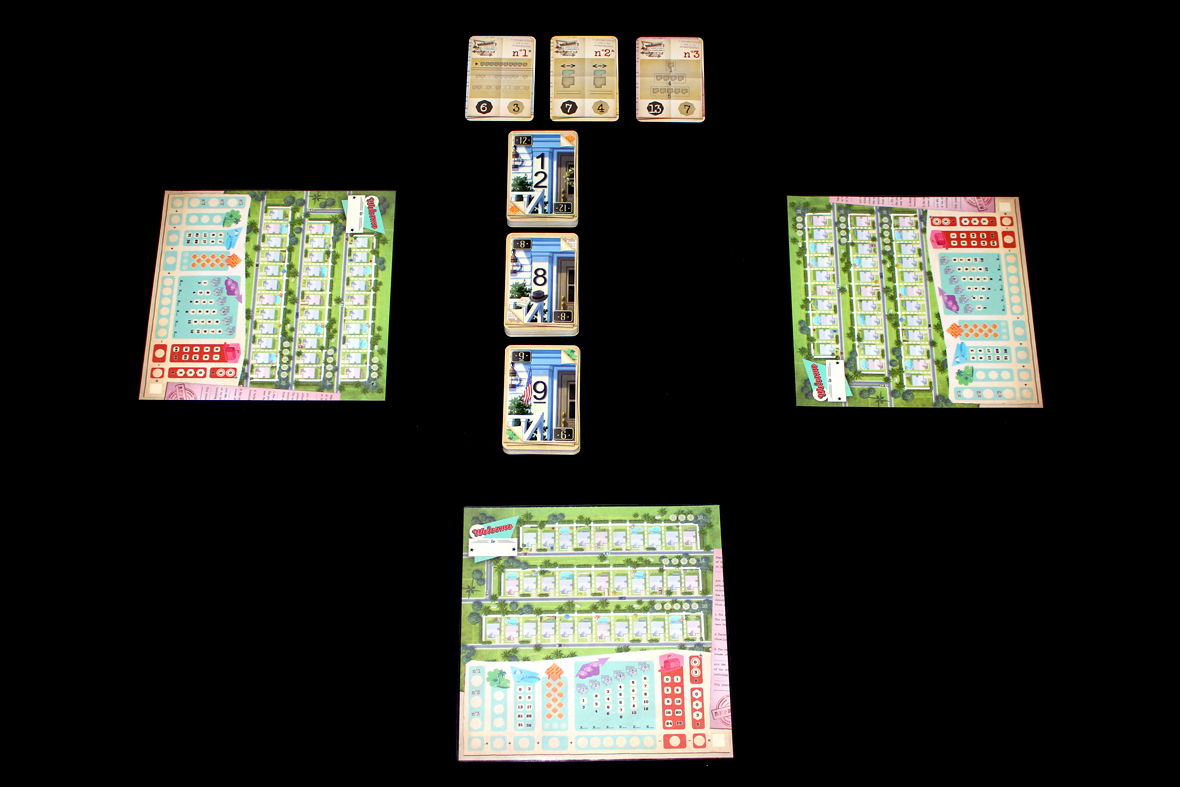 Note that if you’re playing solo, set the game up the same way, but divide the cards into two piles instead of three. Slide this card into the second pile, shuffle it again, and put it below the first pile: 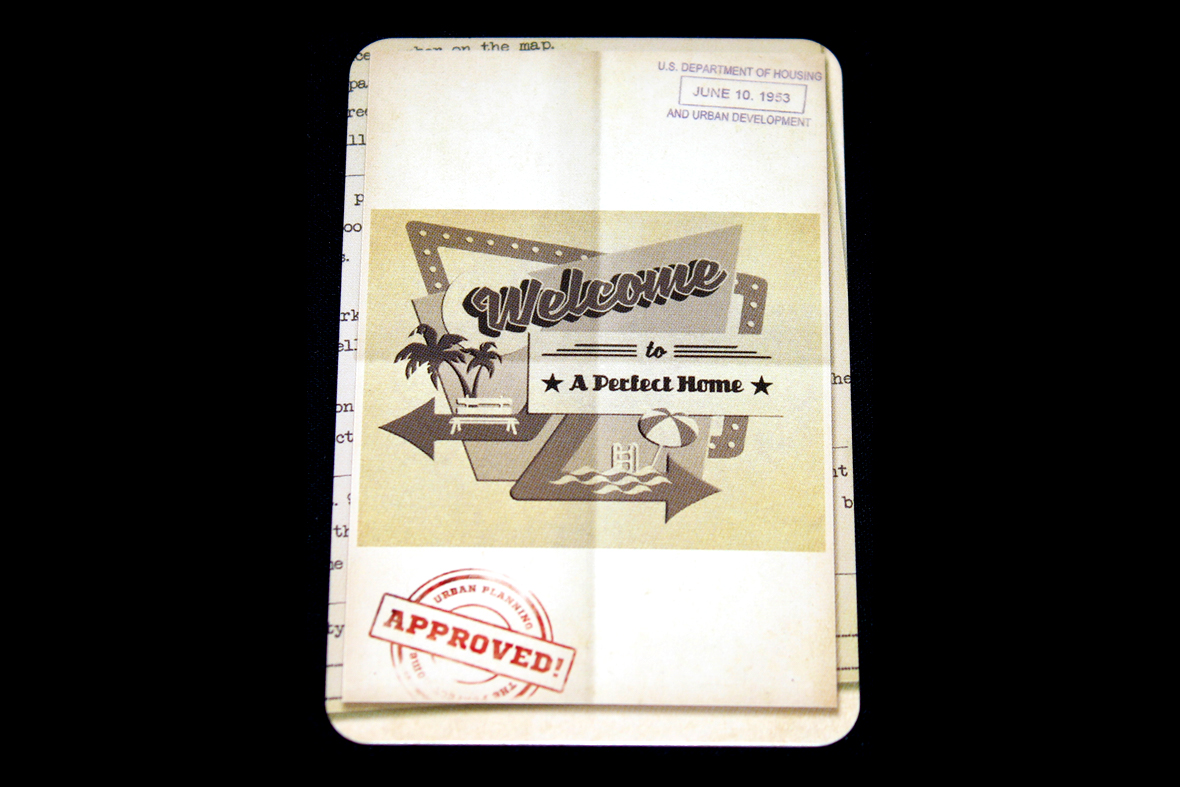 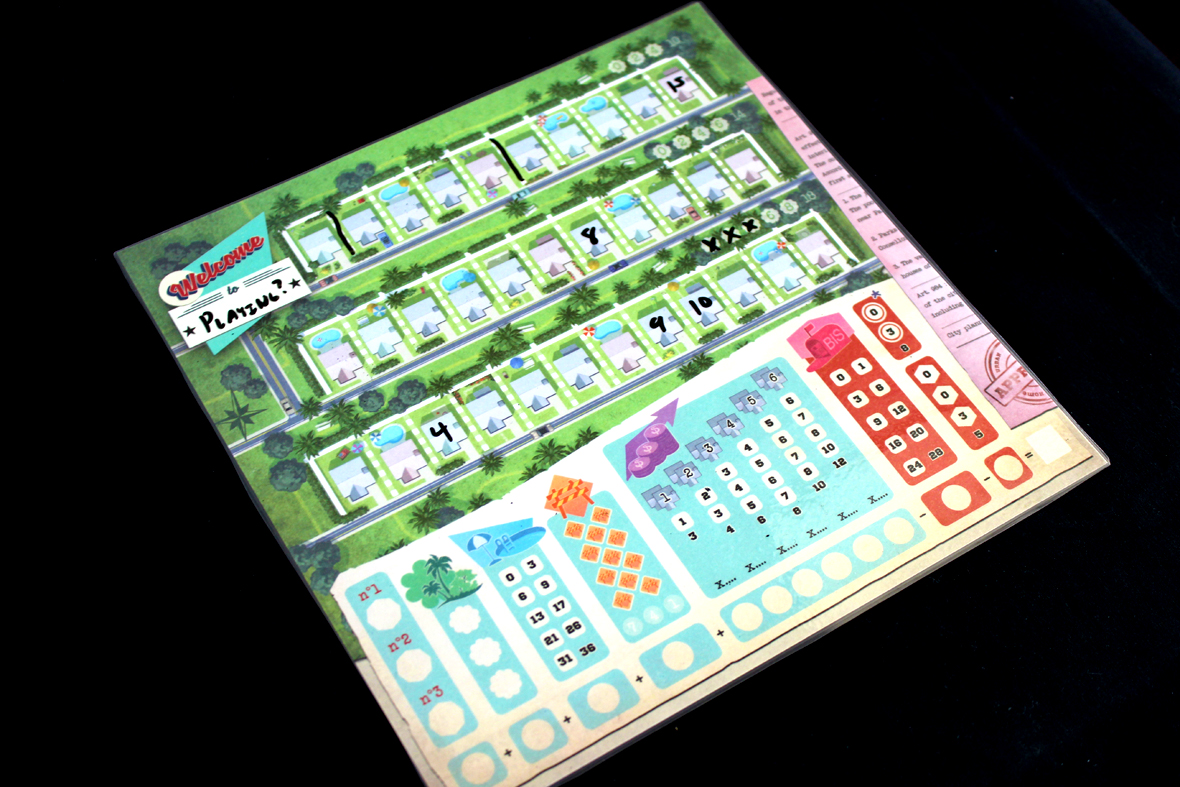 So Welcome To… is a flip-and-fill / draw-and-draw / roll-and-write-adjacent game, similar to other What’s Eric Playing? favorites MetroX and Let’s Make A Bus Route, among others.

Essentially, your goal is to do the best job filling in house numbers on the various homes on three streets in your development. That means, of course, before you do anything, you should name your development by writing a name on the sign in the top-left corner of your sheet. I suppose you could name it after, but that seems less fun, implicitly.

The game is played over a series of rounds, where each round is started by flipping the top three cards of the piles over to reveal three new cards and the backs of the previous ones, which are one of six types: 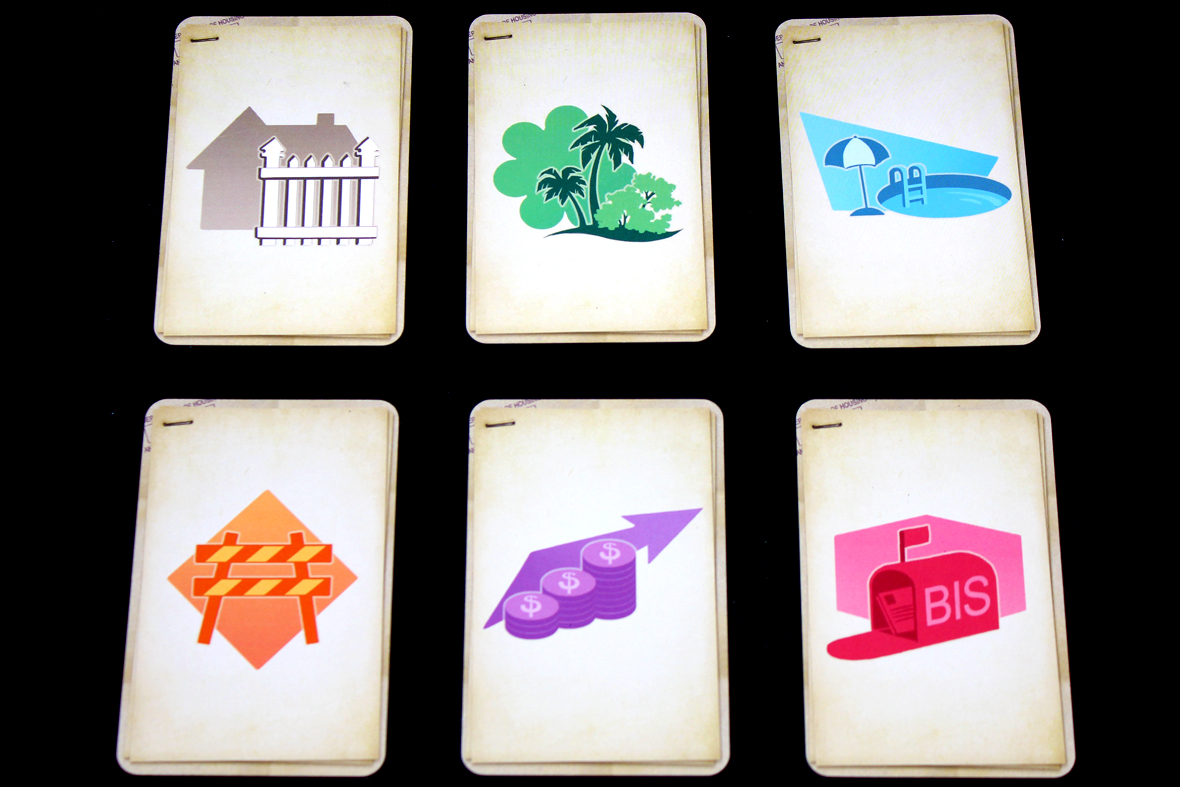 Now, each player chooses a row and writes the number on a house and optionally performs the action listed on the back of the card in that row. Writing house numbers follows Qwinto rules: You may write the number anywhere you want such that all numbers to its left are strictly less than the number and all numbers to its right are strictly greater than the number. These are houses; you can’t have two houses with the same number! How will they deliver your mail? 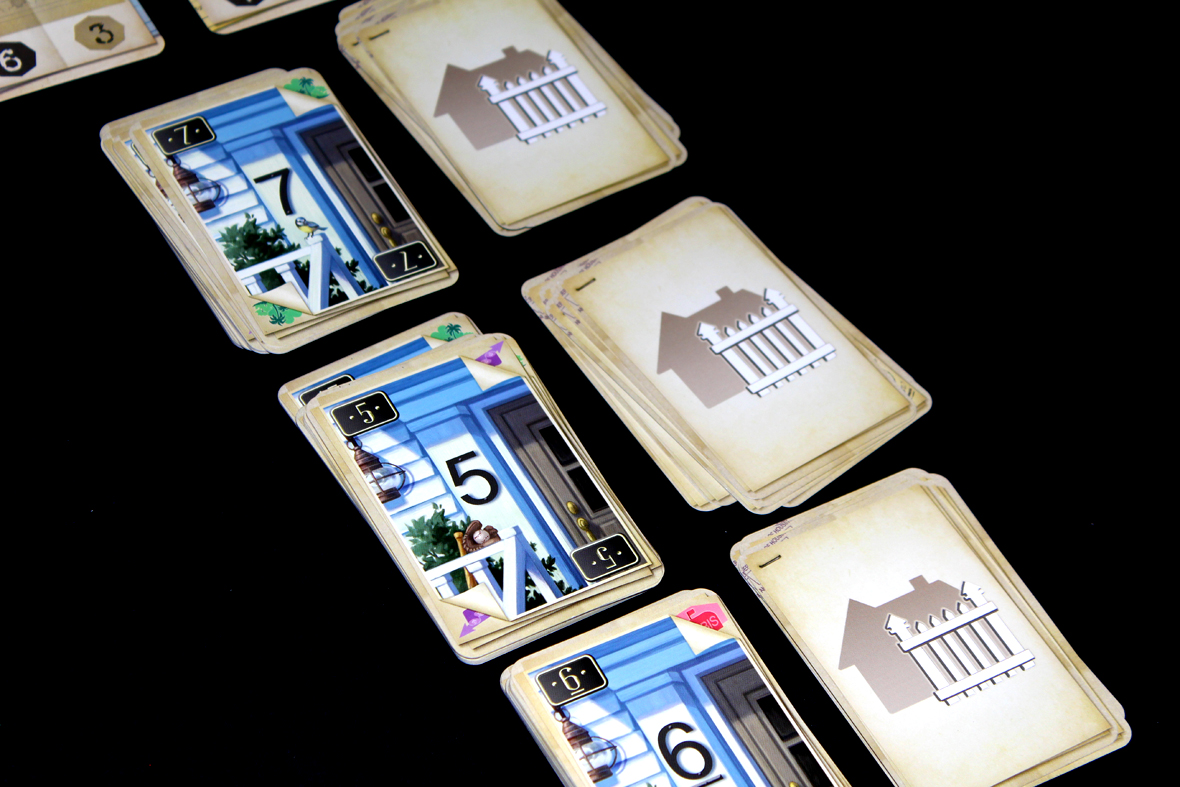 The actions are as follows:

As a variant, you may also play with Roundabouts; if you are, you may optionally cross off the topmost number in the Roundabout section (top-right scoring section on the bottom of the sheet) to add a Roundabout to your street. Draw a circle and place two fences on either side. Sure, you take a mild penalty, but you can restart numbering on the right side of the roundabout. That’s gotta be useful.

As you add fences and form estates you may eventually fulfill the requirements of one of the challenges (usually some distinct number of estates of a certain size, though that changes with the Advanced ones). When you do, wait until everyone is done placing their numbers and announce that you’ve gotten the bonus. Fill in the fence behind the homes used; you may only use an estate for these bonuses once per game. You cannot, as you might guess, subdivide the estates further after scoring a bonus. If you’re the first person to score this bonus, flip the card over — players will now only score the second, lower value when they get this bonus. You may also request that the cards be shuffled and re-dealt, if you want. If you have gotten all three bonuses, the game ends; move on to scoring.

If you cannot place any of the three numbers, cross off the top-most number in the penalty section (bottom-right scoring section on the sheet). If you cross off all three penalties, the game ends; move on to scoring. If not, flip three more cards and go again! 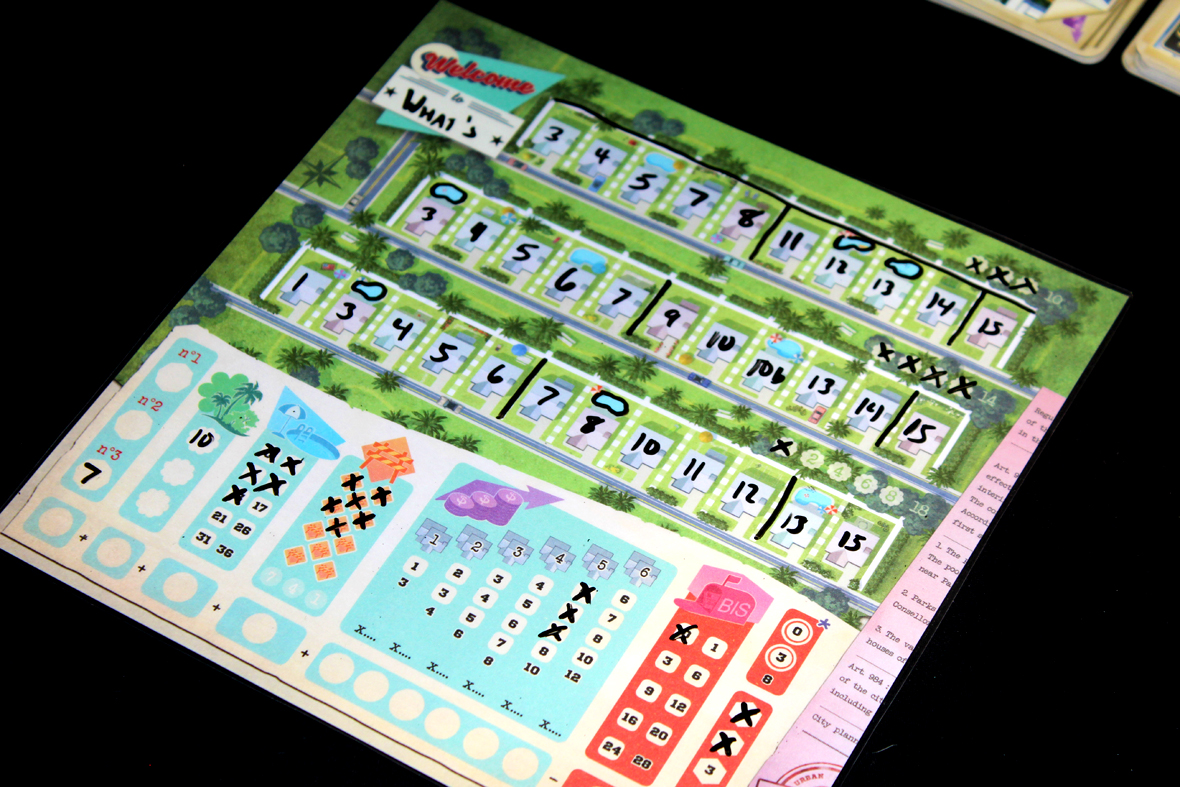 Play continues until one of three conditions is met:

When that happens, add up the values of your various scoring sections. The player with the most points wins!

In the Solo Mode, rather than having three sets of pairs, you’ll draw three cards each round. From those three, choose one card for its number and one card for its effect (you cannot choose the same card for both), discarding the third, unused card.

Your play continues until you hit the Solo Card:

This causes all City Plan objective cards to flip over to their less lucrative side, and play continues. The game ends when you run out of cards to play, you take three penalties, you number all your houses, or you complete all the City Plan cards! Then you score. Keep in mind that you, again, only score 7 points or 0 for the Temp Agency, and that’s contingent on you getting 6 boxes checked off.

So technically there are none (similar to Avenue or Kokoro, this can scale fairly infinitely). In practice, there’s contention for various things (similar to MetroX) that will cause them to get taken more quickly at higher player counts, which means the scores will be a bit lower at higher player counts than at lower player counts. While that doesn’t bother me that much, the logistics of setting up such an event are a bit too much for me to handle so I usually keep this around 5 – 6 people, tops. That’s how many sheets I laminated, at least. 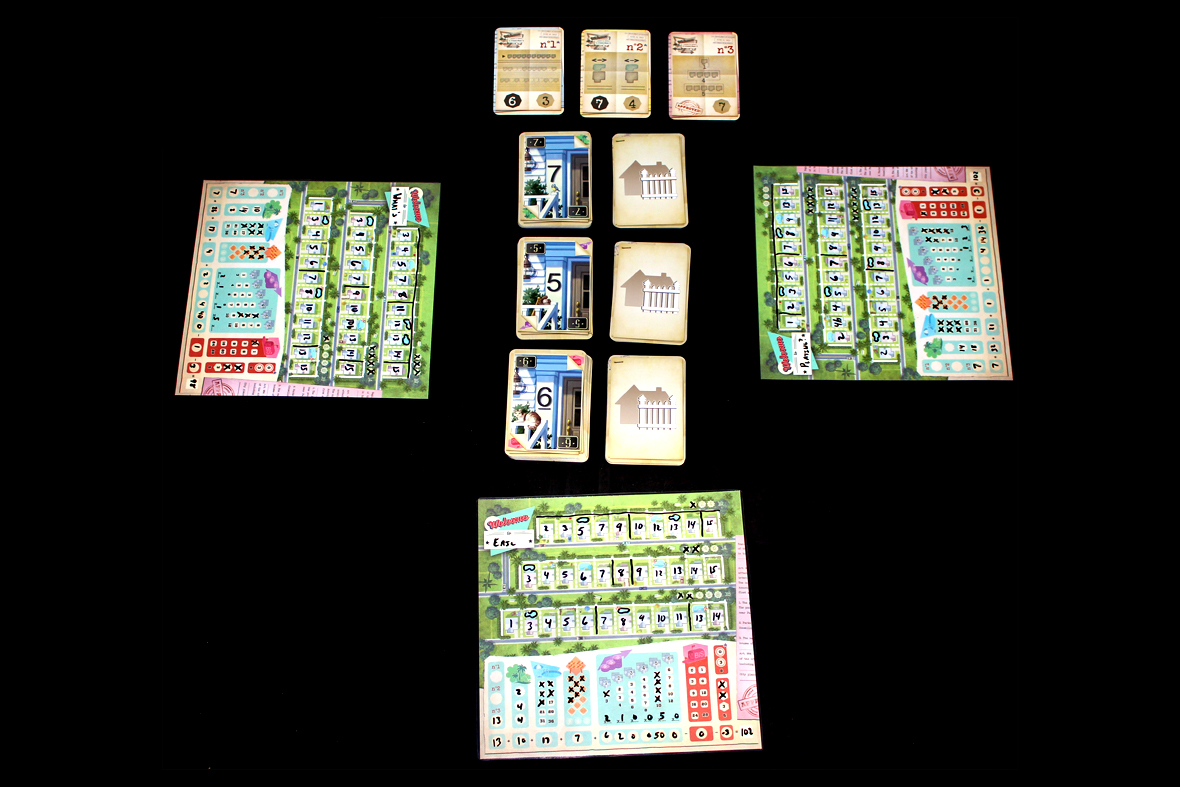 Overall, I’m a huge fan of Welcome To! It’s rapidly become a mainstay in my game bag (both when I’m going to work and when I travel), and I’m a huge fan of the solo game. I definitely haven’t figured out everything it’s got going on, yet (I’ve kinda skipped the advanced drafting variant, you might notice), but that’s partially because I’ve been having enough fun with it at its base to keep going with it. The general metric I use for a really fun game for my groups is if they ask me to bring it back, and a few of my coworkers have been clamoring for it since I brought it a few weeks ago. While I’m not convinced I’d enjoy it at 100 people, I’ve definitely been having a ton of fun at 1 – 6 players, even if I spend the entire game just kinda aggressively pursuing pool construction to the detriment of all else. Either way, I’d say if you haven’t checked it out, yet, I’d highly recommend doing so.