Full disclosure: A review copy of Holding On: The Troubled Life of Billy Kerr was provided by Hub Games. Also full disclosure: this review only covers the first scenario so that it’s spoiler free.

Content Warning: This game deals with pretty adult themes, and may not be suitable for all players. Please check with your game group and see if they’re interested in this game before you spring it on them; it’s not really the kind of game, thematically, that I’d want sprung on me without warning. As a result, this review will touch on some of those themes, as well, so if this game doesn’t sound like it’s up your alley, well, you’re already reading the review so I get the view for it either way. Some photos will be tagged with a content warning and hidden behind a link; trying to be sensitive to all readers. Thanks for reading!

Alright, so, I think theme is incredibly important in games, for me. A good theme can save an otherwise kinda mediocre game, and a great theme can elevate a game to an all-time classic, in my opinion. For me, you’ll rarely see a game cross the 9/10 – 10/10 threshold without it having a theme that I particularly love. There are, of course, a few exceptions (I actually love the theme of They Who Were 8 but the game wasn’t for me, personally) and I defer to abstract games because, well, they’re abstract, but that’s the general mindset I approach games with. This has caused me to become super interested in games with unique themes. While “hospital” itself isn’t a particularly unique theme (I’ve even reviewed a hospital game, Code Triage), Holding On: The Troubled Life of Billy Kerr isn’t just a hospital game. Naturally, after learning more about it, I was enthused about checking it out and writing this review for y’all.

In Holding On (as I will henceforth refer to it), you don’t have many details. All you know is that a man named Billy Kerr was rushed into your wing of the hospital after having a massive heart attack on a plane. He’s struggling to speak and doesn’t have much time left, so your job is to do what you can and keep him comfortable. Even then, you can sense that there’s something he’s not telling you, and that he’s struggling to let go. Can you help him work through his memories, piece together events, and resolve his complex regrets while he still can?

To avoid spoilers, Setup and Gameplay will only cover Scenario 1.

So the first thing you should do is take out the Board: 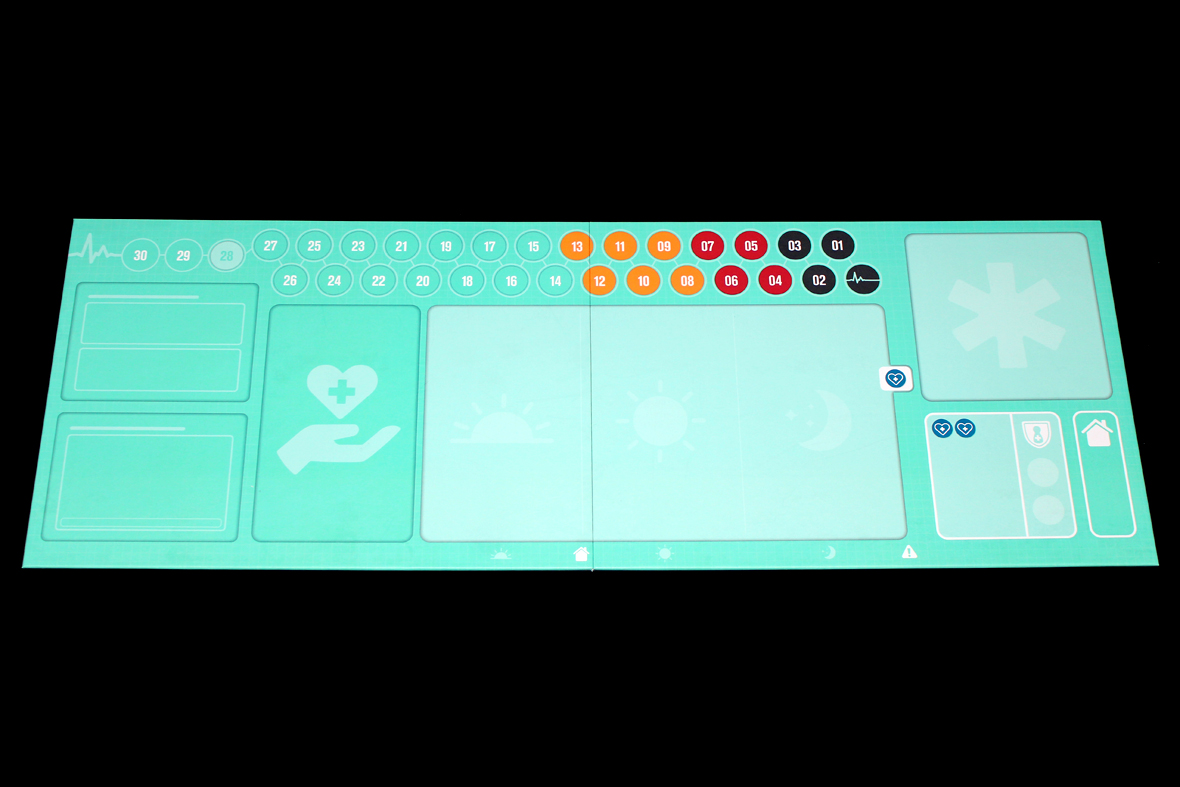 Set it towards the top of your play area, rather than the center. You’ll need the center and bottom for the Memory Cards. To that end, there are two types, so shuffle up the Partial Memories:

Then shuffle the Clear Memories:

Both of these have their backs up to avoid spoilers. Technically, they’re only revealed during the game, so it’s a bit more fun if you discover them for yourself. I’ll be obfuscating them in a few photos (at least blurring aggressively) to try and preserve that for y’all, because I care. The cards with exclamation points on them are Events; more on those later.

Next up are the Patient Cards. Some of these show Billy in a decent amount of pain, so if you’d like to view the photo, it’s linked below:

They have the same back as one of the spaces on the board, so set it there. Now, give each player a Nurse Pawn:

Set 2 Assistant Pawns with your Nurse Pawns in the Break Room: 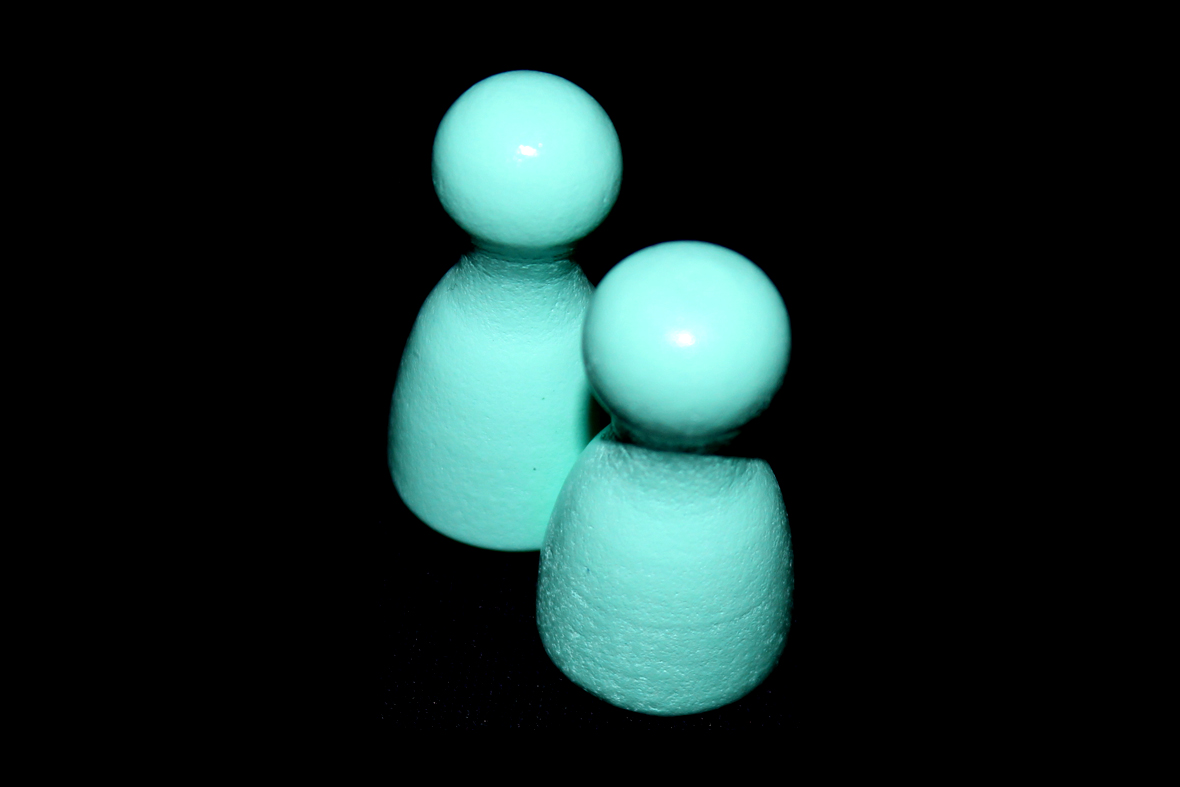 You should have three; strangely, I got 2 of these and 3 of the other pawns, the On-Call Assistants: 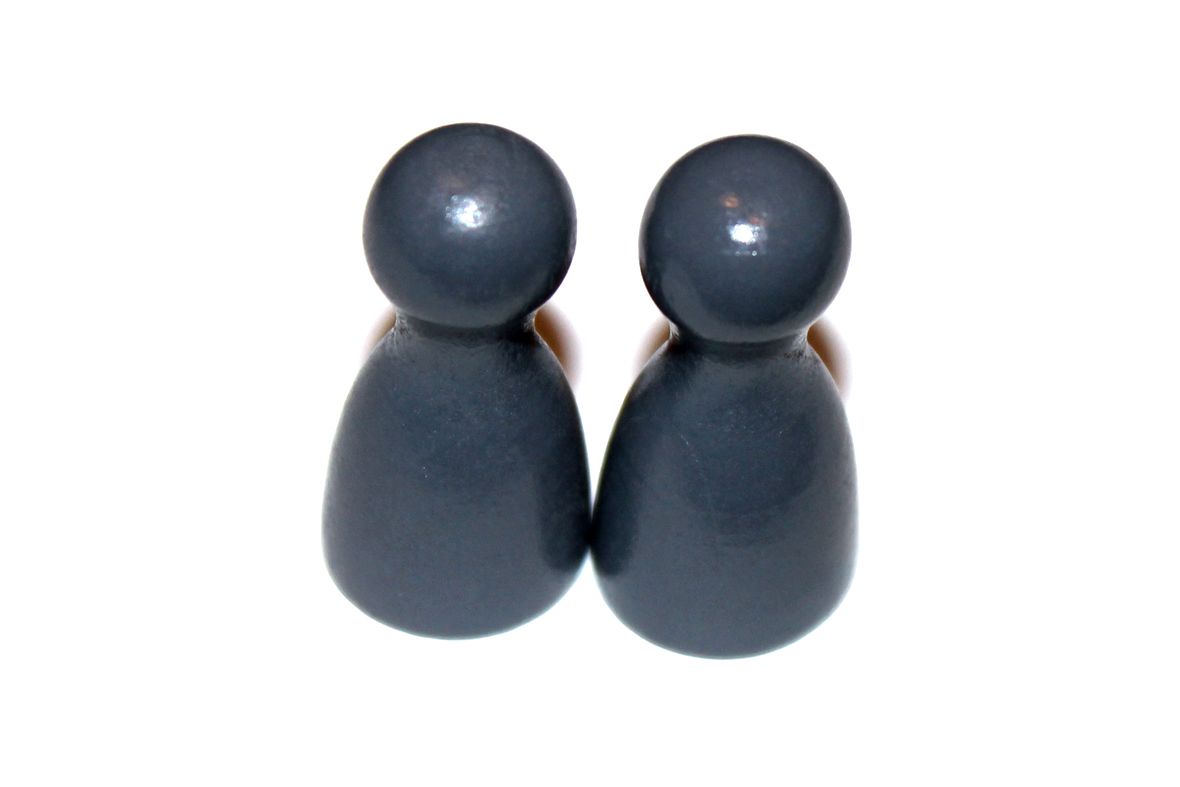 It doesn’t really matter, but set two of those in the room next to the Break Room.

Give each player one of the Care Tokens:

Set the remainder aside; you can earn more as the game progresses. Now, set aside the Stress Tokens: 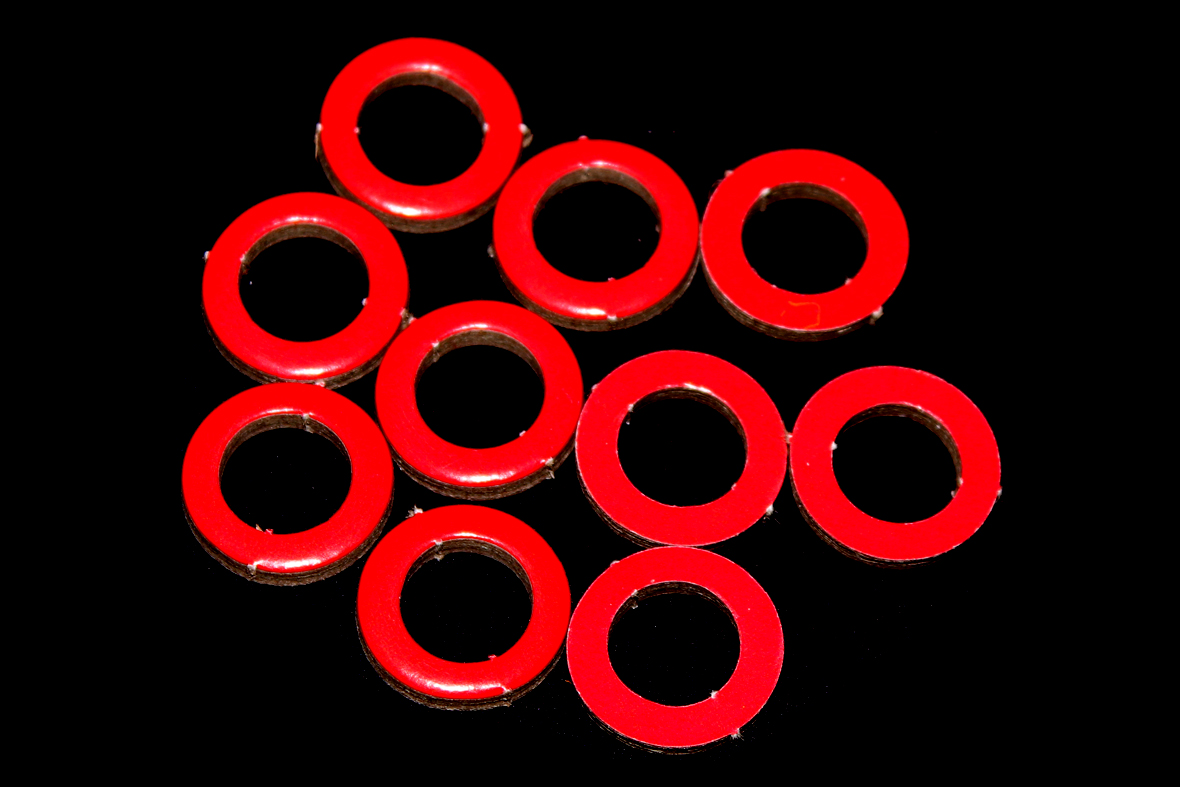 You probably don’t want that. Speaking of things you don’t want, there are also two Hospital Warning tokens:

Set those aside, for now. Now, go to the Scenario Deck: 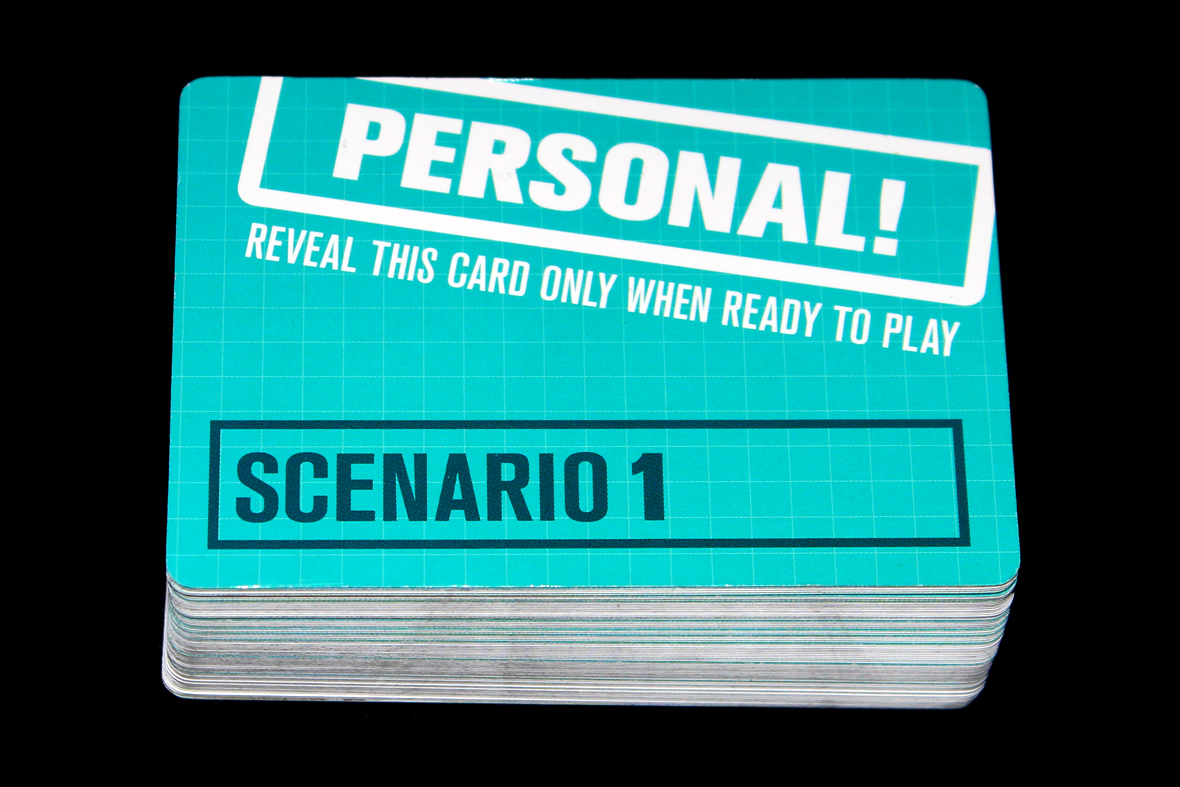 You’ll want everything for Scenario 1. Don’t look at the rest of the stuff; treat it like Pandemic Legacy, Charterstone, or The Rise of Queensdale; don’t spoil it for yourself. Once you’ve done that, give one player the Shift Manager Board; they’ll be going first: 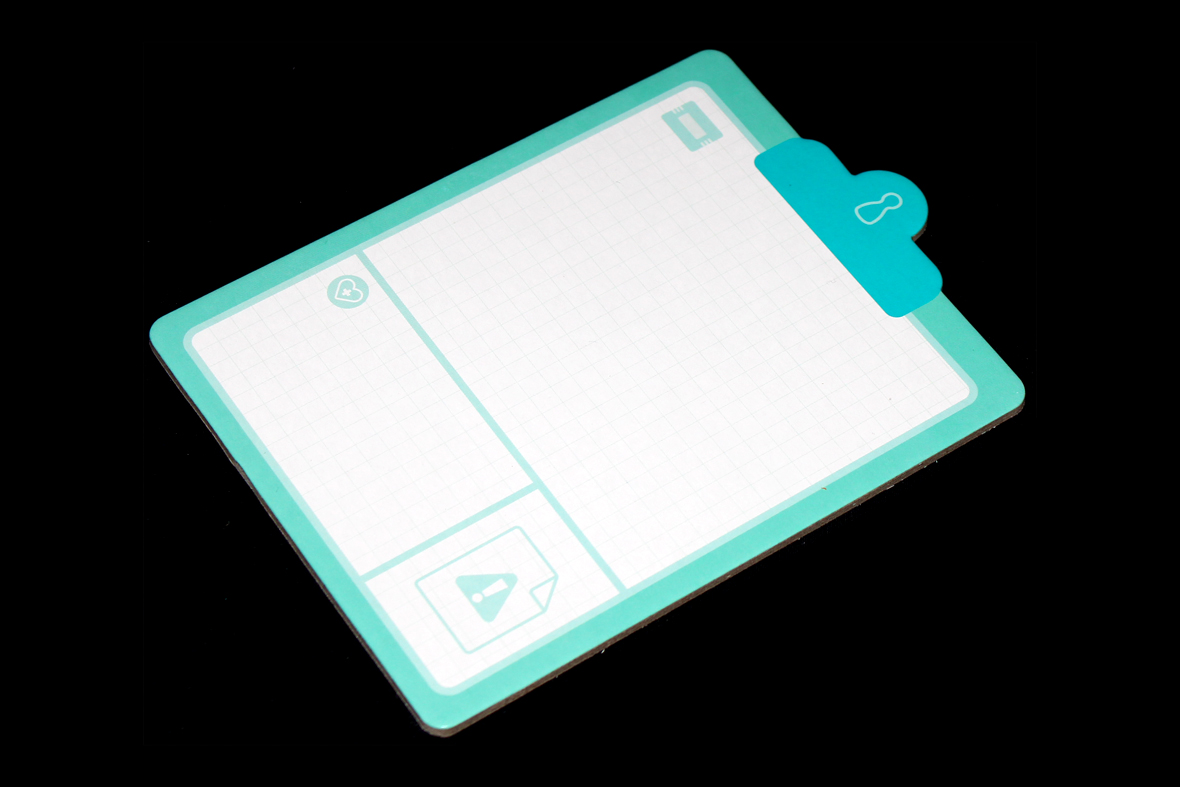 You’re all ready to start! Anything else you find in the box won’t be used in this scenario. 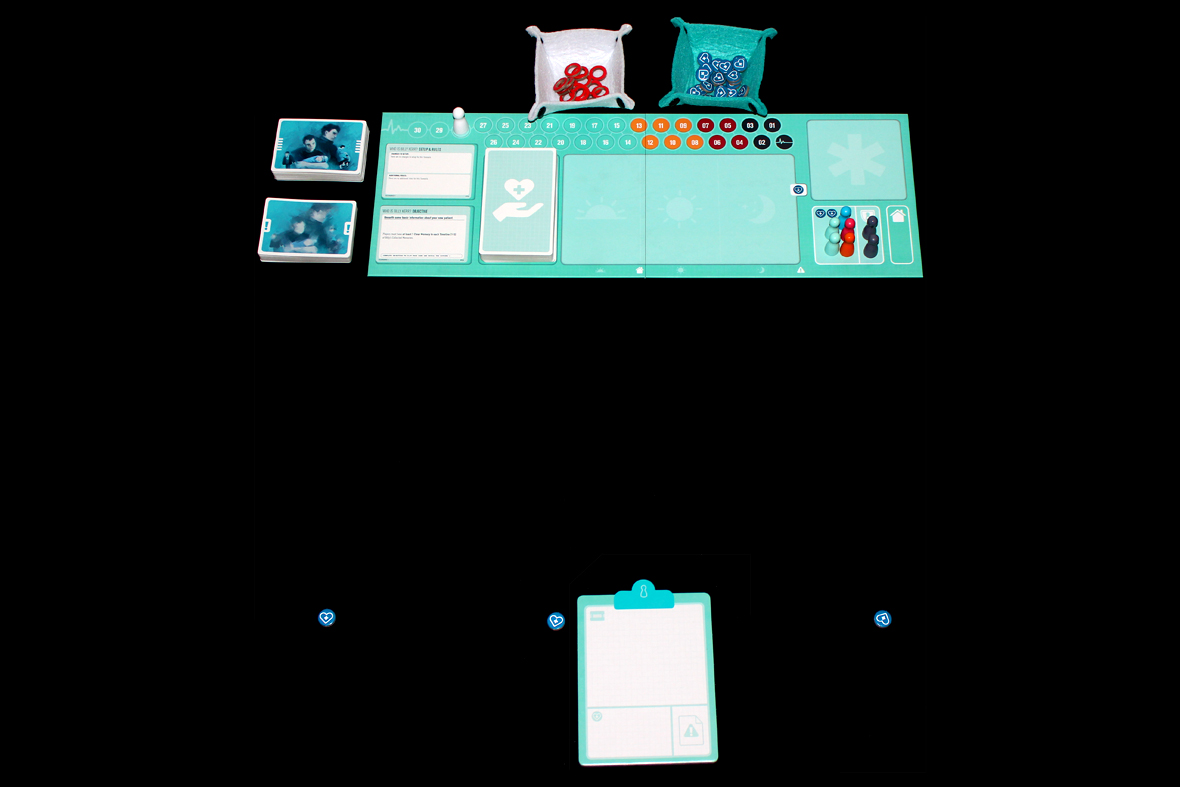 Note: The game has some significant changes at different player counts. For the full list, see the Player Count Differences section.

So, over the course of Holding On, you’re attempting to complete a Scenario by fulfilling certain objectives. Those objectives change from game to game, and new rules for setup and gameplay can add new actions or change the way that your characters can act on their turns. Thankfully, the first scenario is about getting your bearings and learning the game, so you don’t have to worry too much about rules beyond the basic ones; that said, this is not an easy game, so don’t get too comfortable.

Over a series of rounds (days) you’ll be working to help Billy as best you can. Each day has three phases: Morning, Afternoon, and Evening. At the start of each phase, the Shift Manager will reveal a Patient Card for that phase. This represents Billy’s current condition. When that happens, generally, you can provide Medical Care or Palliative Care (left or right side of the cards). Some cards are Emergencies; you can only provide Medical Care. Now, the Shift Manager moves workers from the Break Room and places them on the pawn spots on that card. If the Shift Manager cannot pull enough pawns from the Break Room,  then they must hire one of the On-Call Assistants, have an existing player or Assistant on the card cover the gaps (gaining one stress per empty spot), or pull players from the immediately previous shift. If they still cannot fill all the spots, they must take a Hospital Warning. If you ever take two, you lose. So don’t do that.

Once you’ve set enough players on the spaces, you must decide to perform Medical or Palliative Care. One caveat: you must perform Medical Care at least once per round. If you don’t, well, you’re not really doing the “hospital thing”, so you get another Hospital Warning.

As far as Events go, they generally look like this (and have an exclamation mark on the back):

Some of them are good, some are bad, but they both depend on what point you’re at along the Health Tracker (color-wise). Once you complete an Event, set it aside until the next player needs to draw from that deck, then shuffle it back in (unless the Event says to remove it after use). I find that just putting it on top of the deck (since you draw from the bottom) is sufficient, since you should shuffle beforehand anyways.

If you’re forced to (or choose to) move a player forward from the immediately previous shift, that’s kind of bad for their mental health (you’re overworking them), so they gain Stress. Gaining Stress is always bad (hey just like real life), so place one of the red tokens around your pawn and immediately discard a Care Token or return one of your Memory Cards to the relevant deck. If you have neither of those things, well, you can’t lose what you don’t have. But remember, this can force you to lose Clear Memory cards. That’s not good.

Generally speaking, On-Call Assistants can’t gain Stress. Assistants can, however, but they can’t have more than two Stress. Nurses (the players) can’t have more than three stress. If any player or Assistant hits their stress threshold, they will go On Leave the next round (day) and be unavailable. Also, Nurses can’t perform as well when they’re stressed, so they lose the ability to perform the Inquiry action at two or more stress. Try to avoid that. If you’d like to do that, you can also preemptively send a player in the Break Room on leave, either after the Morning Shift (they’ll return at the start of the next day) or after the day (they’ll return at the start of the day after next). The upcoming Shift Manager cannot go on leave unless they’re forced to do so by being Overstressed; if that happens (you’re forced to go on leave and you’ll be out the turn that you’re Shift Manager) the Hospital gains a Hospital Warning. Don’t do that.

The round ends after the Night Phase, but during the Night Phase, once it’s staffed, any one player may gain a Care Token that can be used during that phase (or saved for later). If any pawns are still in the Break Room (players or Assistants), they immediately gain an extra two Care Tokens each. That’s pretty huge.

Once the round’s over, you’ll resolve Partial Memories and check Clear Memories:

Now, the round has fully ended. Pass the Shift Manager board (and all Care Tokens / Hospital Warnings on it) to the next player.

Play continues until one of several things happen:

Good luck! Once you’ve completed the first Scenario, you’re ready for the full campaign! Even then, I might give it a couple more plays to get accustomed to the gameplay before you dive in fully.

So, the game plays pretty differently at different player counts:

Generally speaking, I find that I’ve enjoyed this at two and three players. At four, it seems like there will always be one player directing rather than playing, so I’d probably just rather stick it out at a lower player count. Your mileage may vary on this recommendation, though.

Edited for your viewing pleasure.

Overall, Holding On is a very unique experience. I mean that in a very positive way — I enjoy the core mechanics of the game (it reminds me, in some ways, of Spy Club, but with less card flipping). The timeline elements and construction is super neat, and the art / graphic design of the game is phenomenal. It does a good job capturing the solemnity of its material, and I appreciate that it endeavors to do so respectfully. I think there are a lot of experiences gaming can expose us to that take us outside our (individually limited) worldview, and I appreciate that Hub Games is making something like Holding On as proof that there are great games waiting to be made in that space. I see Holding On as a triumph, yes, but also a challenge — there are so many unique themes out there, waiting for someone to figure out a way to connect players to them. What lessons can you take from a game like Holding On, and how can you apply them forward in your own work? I’d love to hear y’all’s thoughts on this. In either case, if you think you can handle an intense gaming experience, I’d highly recommend checking out Holding On! Just make sure your game group is down for it, first.