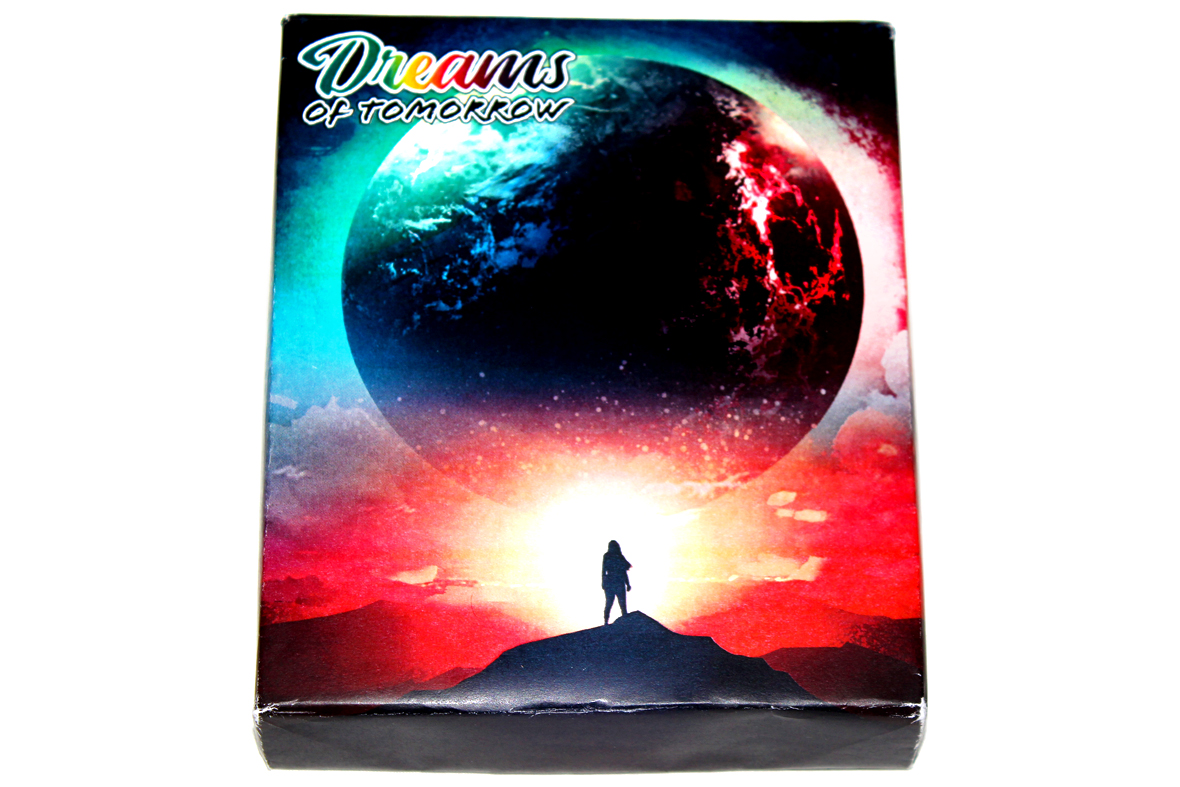 Full disclosure: A preview copy of Dreams of Tomorrow was provided by Weird Giraffe Games. Some art, gameplay, or other aspects of the game may change between this preview and the fulfillment of the Kickstarter, should it fund, as this is a preview of a currently unreleased game.

I’ve spent most of the month doing Essen / Gen Con work, but like I did with Lovelace & Babbage (and will do with Zoo-ography), I do try to make some room for Kickstarter games in my schedule. My schedule’s currently swamped until November, but there’s room in it somewhere. That said, I can always find some time to try and look at the latest game from Carla and Weird Giraffe Games; they’ve been having a pretty solid year, what with Stellar Leap fulfilling and Fire in the Library doing so well on Kickstarter. How does their latest release measure up?

In Dreams of Tomorrow, you’ve had a bit of a rough time and the world is ending. Good news, no more traffic; bad news, no more you, either. Bit of a mixed bag. The only way to stop it is to inspire people way back in the past through their dreams so that they can work to change their future (your present). Use the dreams abilities or weave them into sequences, either works, but you don’t have much time; will you be able to engineer a better tomorrow?

Game’s actually pretty easy to set up. Set the Rondel cards out for your player count. They have a front and a back side, but place them front-side-up in order from 1 to 4:

These cards are referred to as Consciousness Fragments, and they form the Collective Consciousness, which is the space you’ll be playing in.

Next, form the Dreamscape by drawing Dream cards for the number of players you have: 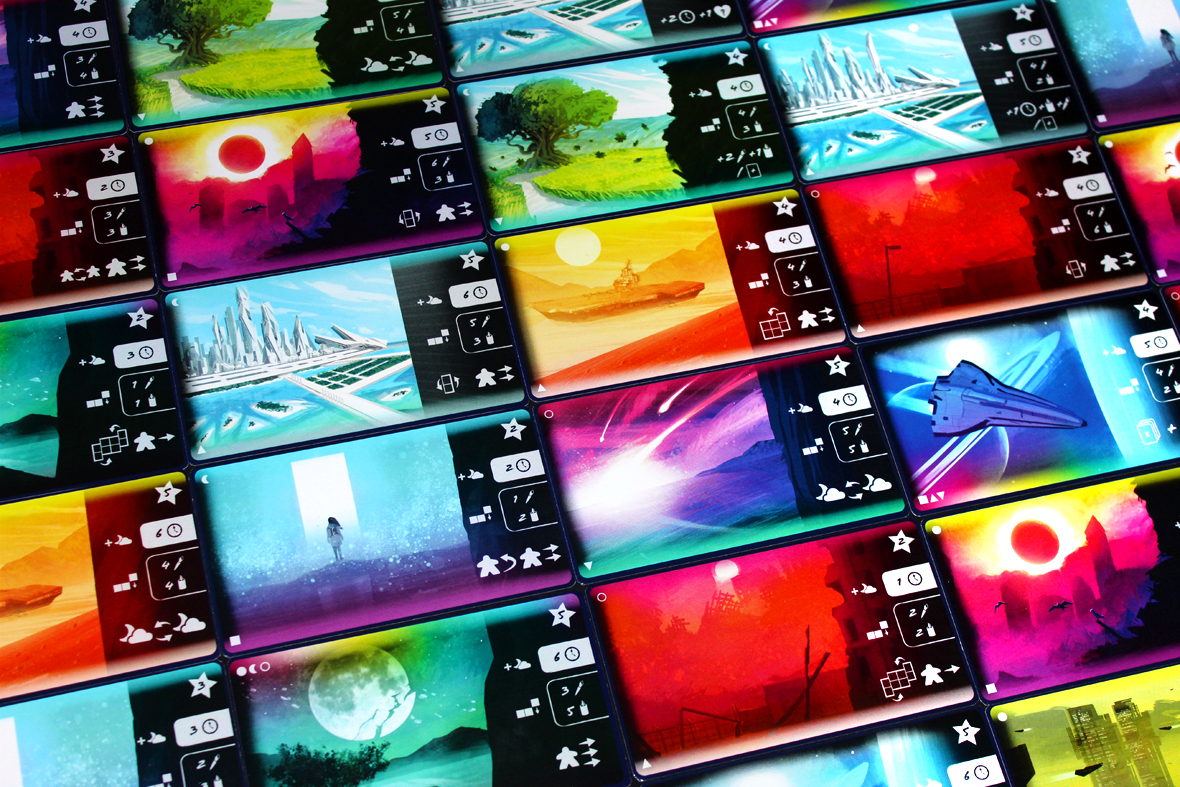 Place them in rows below the Collective Consciousness cards:

If you’re playing with the Night Mare, set it out and choose what you’re going to use (there are some solo mode cards [not pictured] that dictate its behavior): 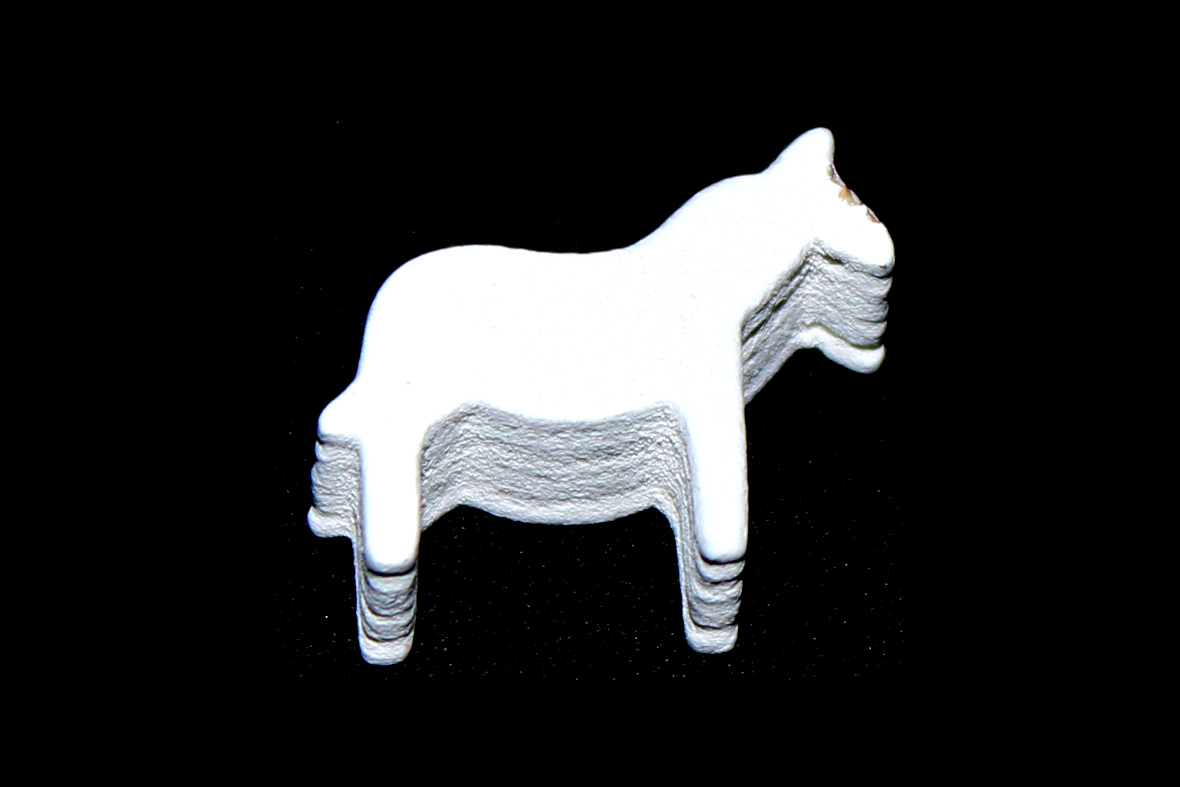 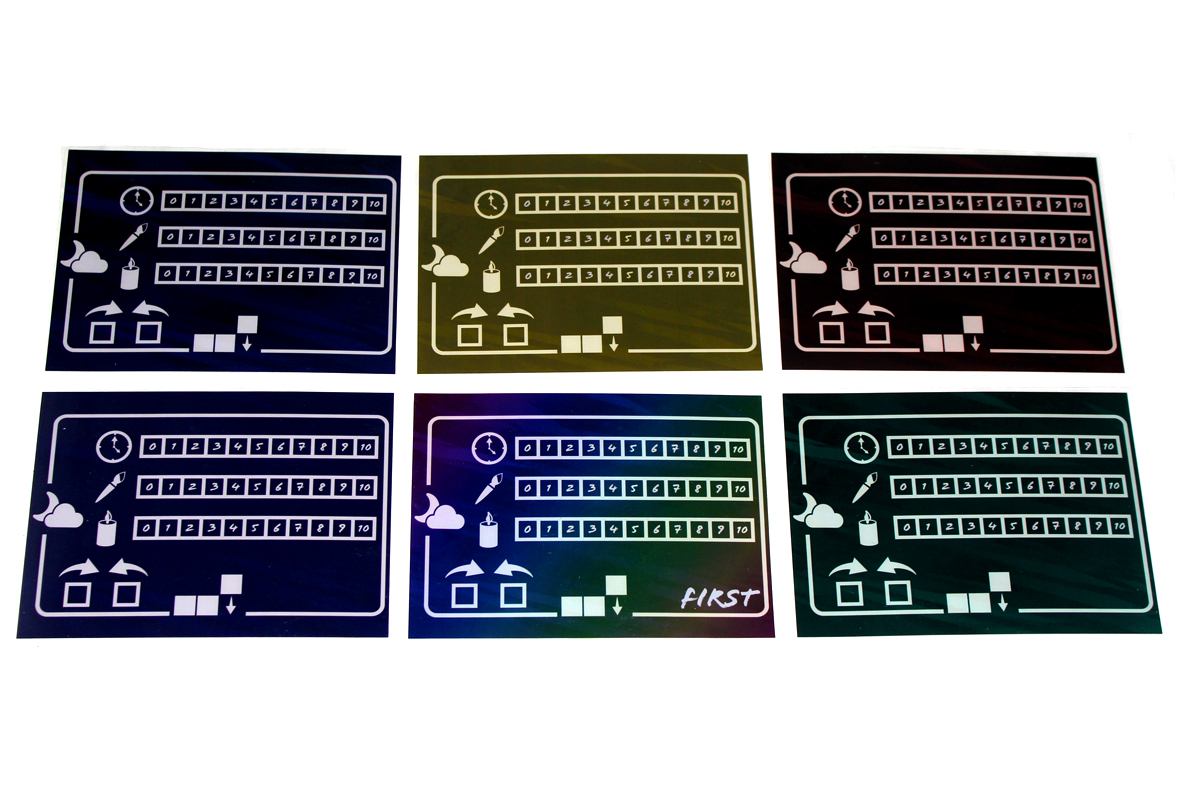 Have them set their Meeple on the top-left space of the Collective Consciousness (each card has a top and bottom space) and place the cubes on 6 Experience (clock), 0 Creativity (paintbrush), and 0 Hope (candle, also real life). Place the last cube on the Clockwise arrow on the bottom-left of the player board: 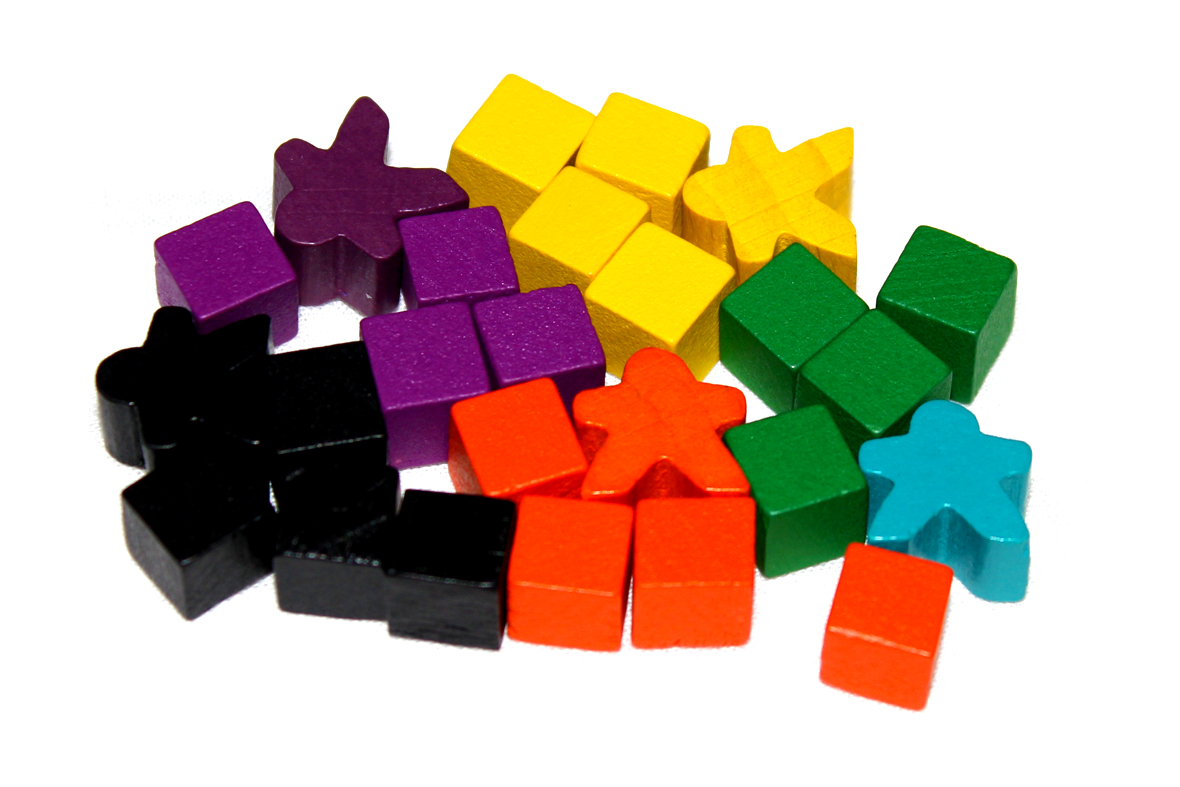 There’s also a set in white, but it doesn’t photograph well against a white backdrop. Some sacrifices must be made in the name of progress. 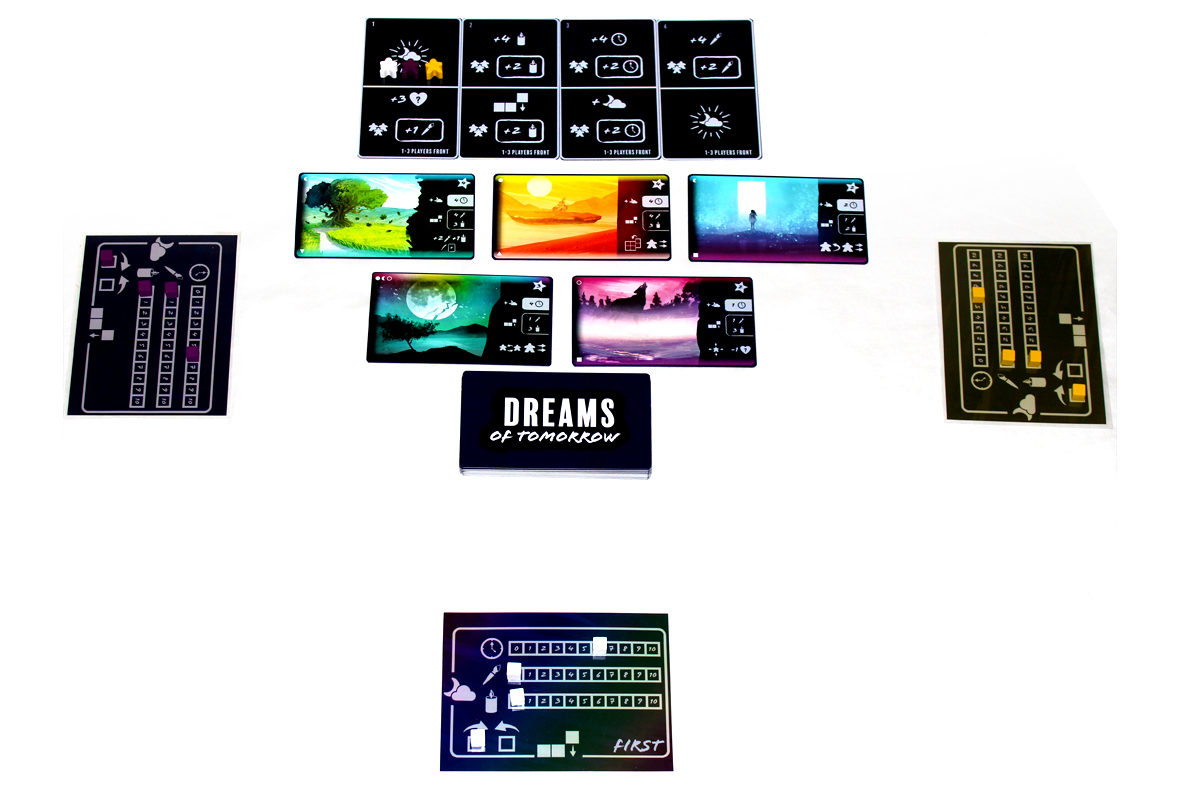 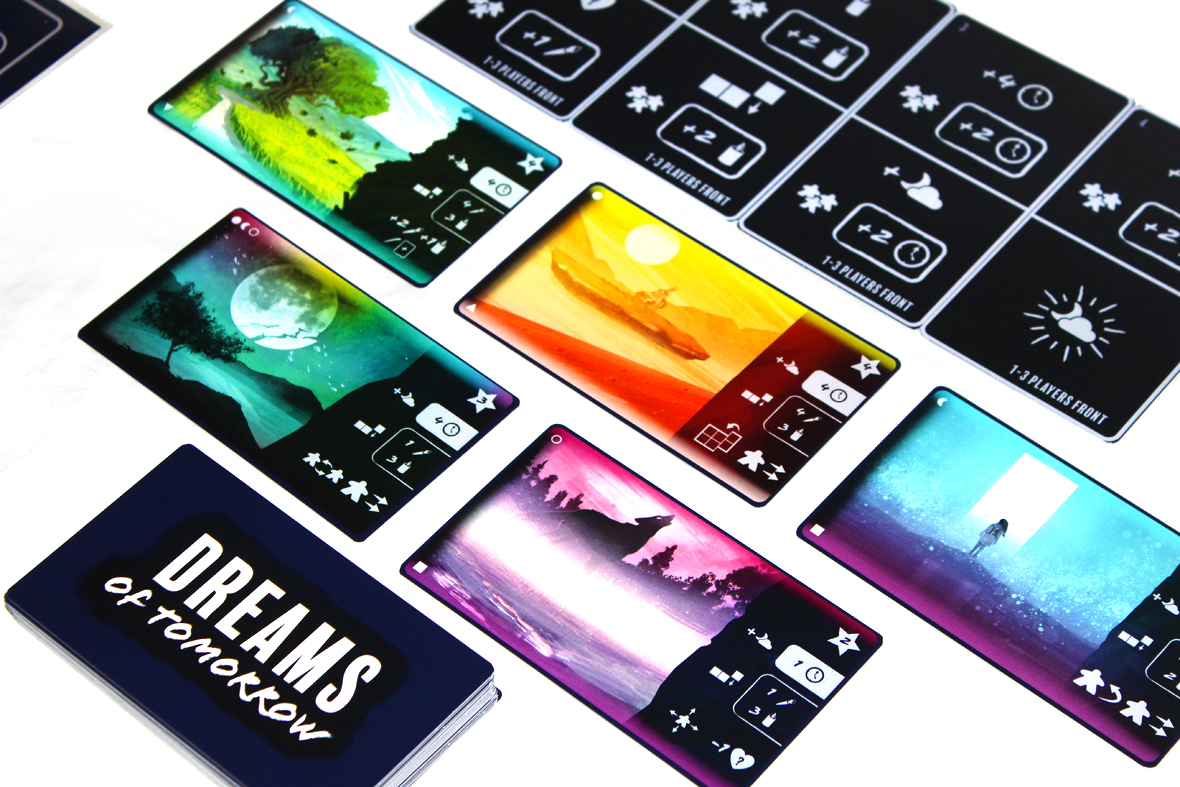 So in Dreams of Tomorrow, you want to score points by catching Dreams and weaving them into sequences. Matching up certain colors of Dreams will create Resonance, which will score you even more points. Once a player has woven 5 Dreams, the final round occurs and the player with the most points at the end wins.

To get to that point, we have to start with your first dream. Each player has 6 Experience, and must now take their first Dream for free. Start with the Starting Player and go clockwise as each player claims a dream from the Dreamscape (and then refills it). For your first game, since you likely don’t know what any of the abilities mean, you can kind of just draw random ones from the deck, if you want. Either way, there’s a cost in the upper-right corner (not the star; that’s how many points its worth). It’s the one with the Experience icon; have each player lose Experience equal to that icon’s value. 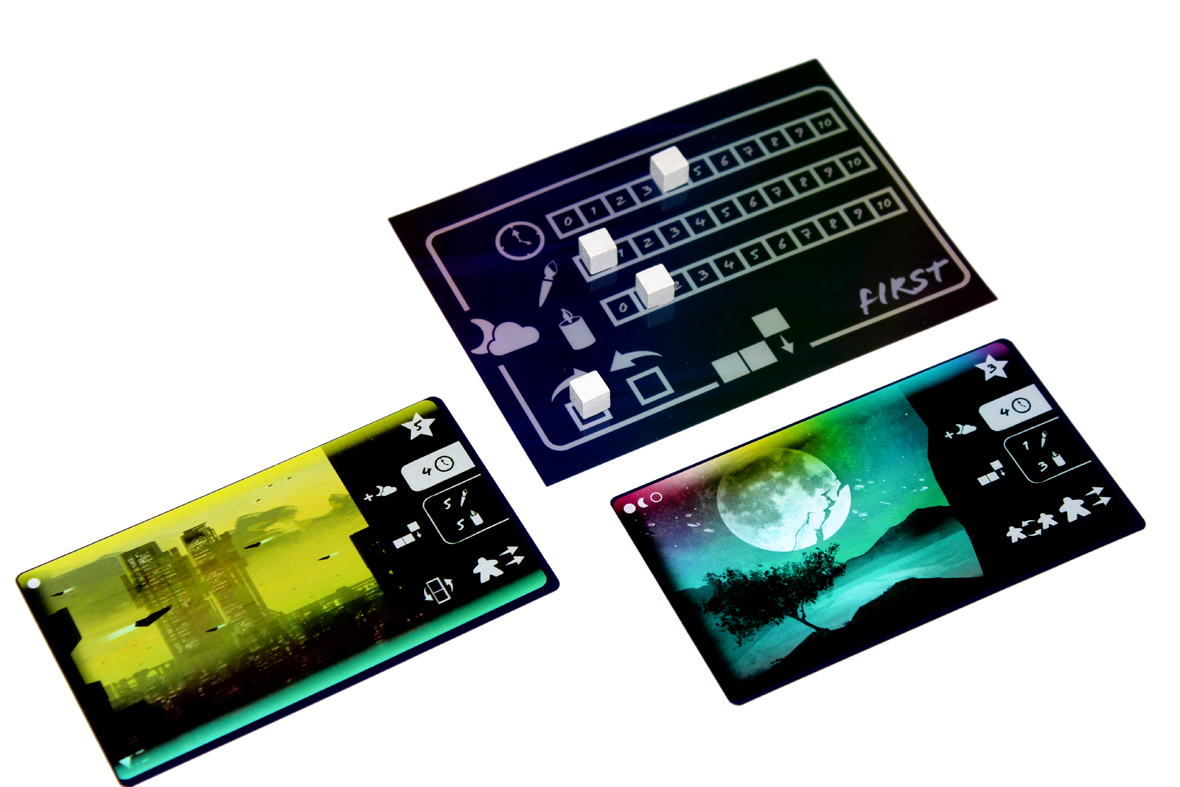 Now that you’ve done that, the game can begin! The first thing you’ll do on your turn is move, and this movement system has a lot in common with EmperorS4’s rondel games, Mystery of the Temples and Discovery: The Era of Voyage. The eight spaces in the Collective Consciousness form a rondel, and you can move clockwise (unless your character has the ability to switch). You move as follows:

This extension-for-resources only applies during this phase; some other abilities may let you move but you cannot pay more resources to move farther as a result of those cards. Either way, once you finish that, you’ll land on a space. The spaces have several potential actions:

That’s essentially the whole of it! Some abilities let you move around or flip cards in the Collective Consciousness; if you do that, any players on the card stay on their spaces. 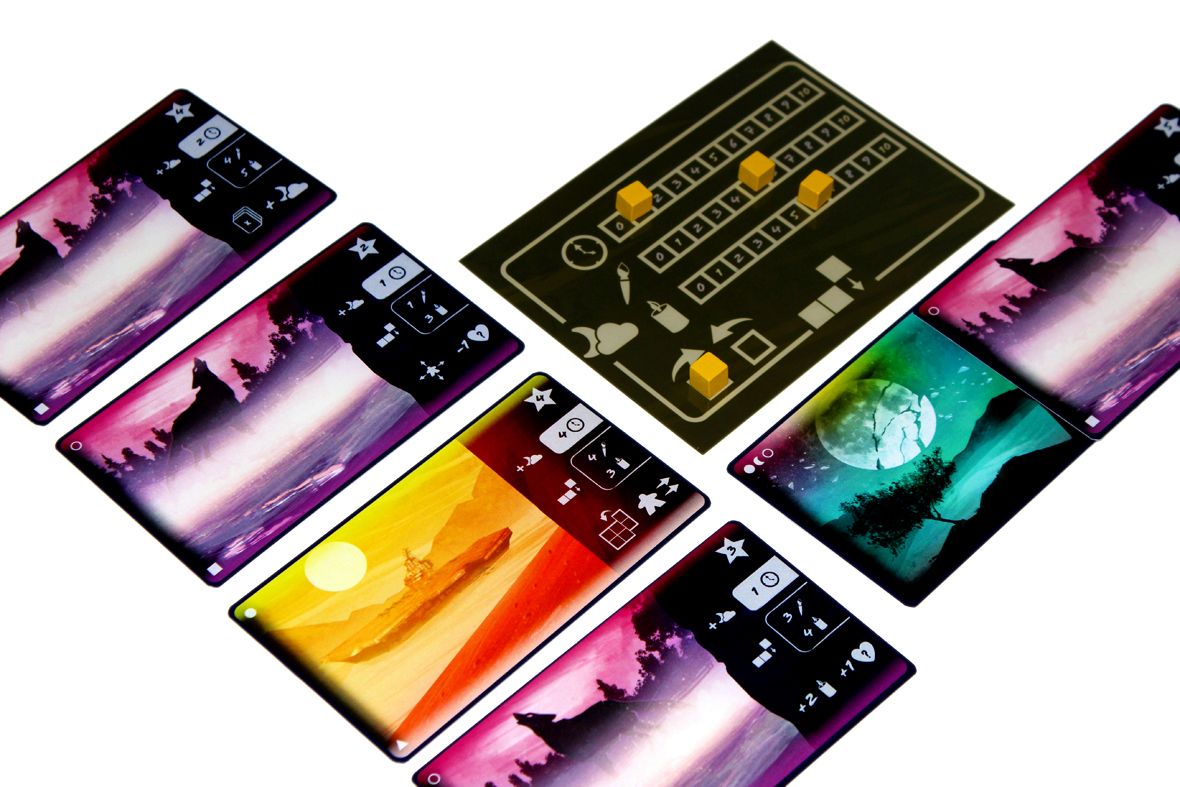 Play continues until one player has added a fifth Dream to their Dream Sequence. When that happens, continue the round until every player has taken an equal number of turns (if the last player is the first to add a fifth Dream, the game ends after their turn). Now, you move on to scoring. Scoring works in two ways:

Add up the Resonance Scores with the Dream Card values and the player with the most points wins! 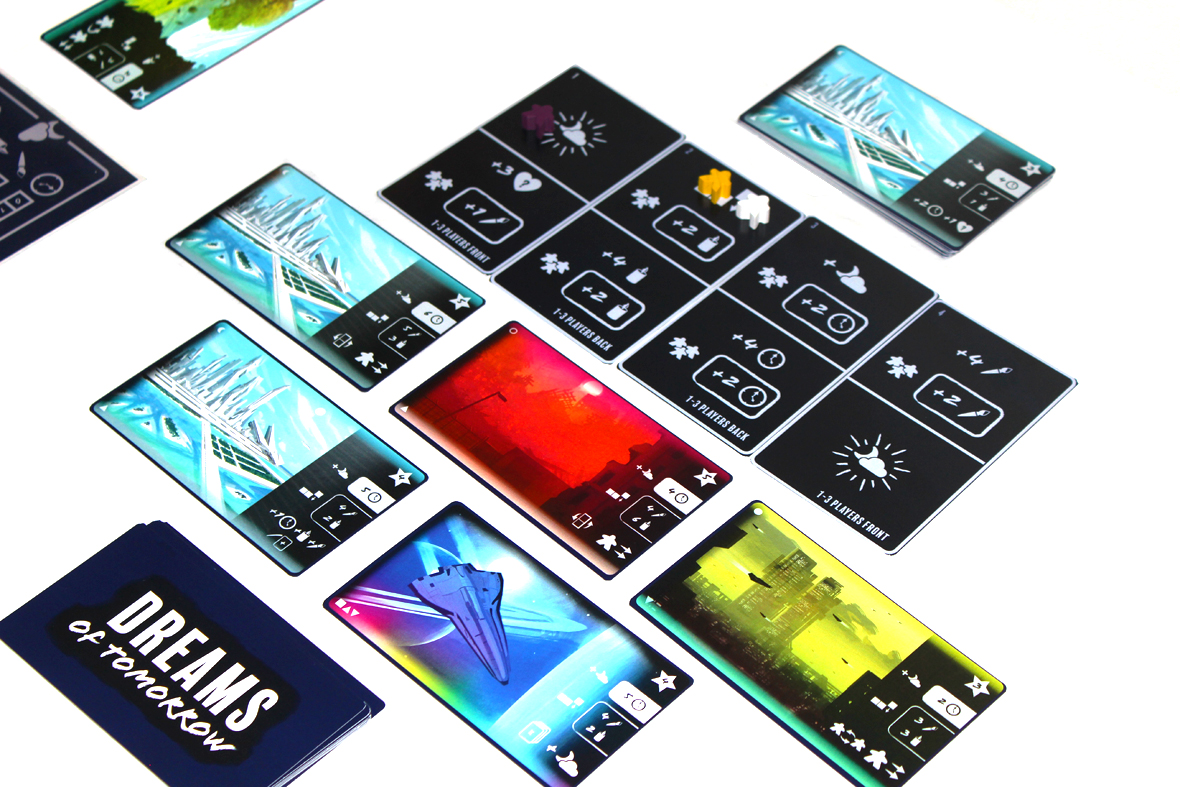 If you’re looking for a more chaotic game, add in the Night Mare! This bad horse tears through the Collective Consciousness, changing everything around. You’ll use the solo mode cards for this, but essentially after the last player’s turn, the Night Mare will act (and move around some of the cards in the Collective Consciousness). The Night Mare’s next turn moves up counterclockwise in the turn order (so its first turn is after Player 4, its next turn is after Player 3, and so on). I believe that in a two-player game, this means that the Night Mare takes a turn after every player, which makes the game … pretty volatile.

So the primary difference is that you play with a different rondel at higher player counts, as you need to make sure you’re not getting overrun with resources when it’s not your turn. That’s pretty much the only difference, and that’s not a huge one, in my opinion. The major reason I have a slight preference for lower player counts is just that there’s less downtime between my turns. This is addressed somewhat because you still get resources when it’s not your turn, but I like to do things, so I’d probably lean towards playing this more at 4 or fewer players. 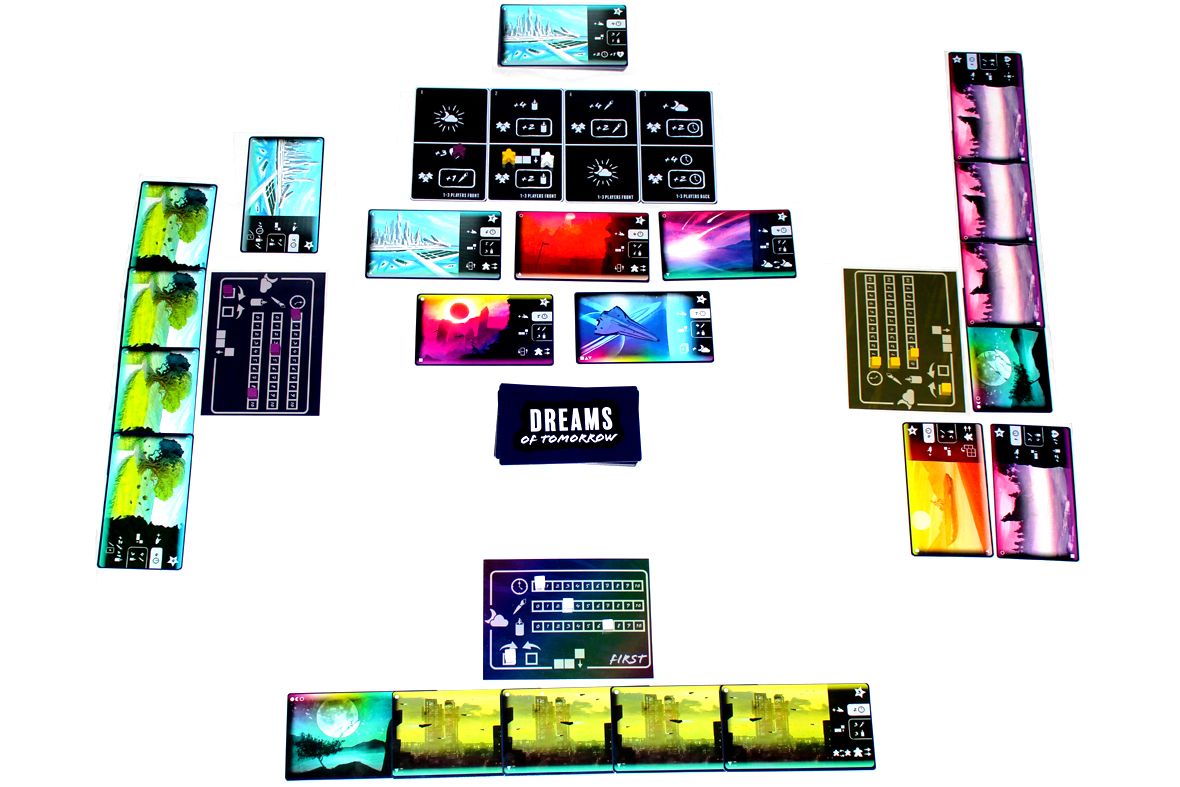 Overall, I liked Dreams of Tomorrow! Once you get through learning all the Dream Abilities and what their icons mean, the game is pretty straightforward to understand. It’s a bit of an optimization problem and a bit of a deck skimming problem at the same time, with some cool set collection elements. That said, I’d be doing everyone a disservice if I didn’t mention the fantastic art — James is really crushing it with these different pieces of the Dreamscape and they’re just absolutely fantastic. Weird Giraffes has another fun game on their hands, and if you like rondels, great art, some set collection, or the idea of saving the future, Dreams of Tomorrow is a fun game worth checking out! I’ve enjoyed it.