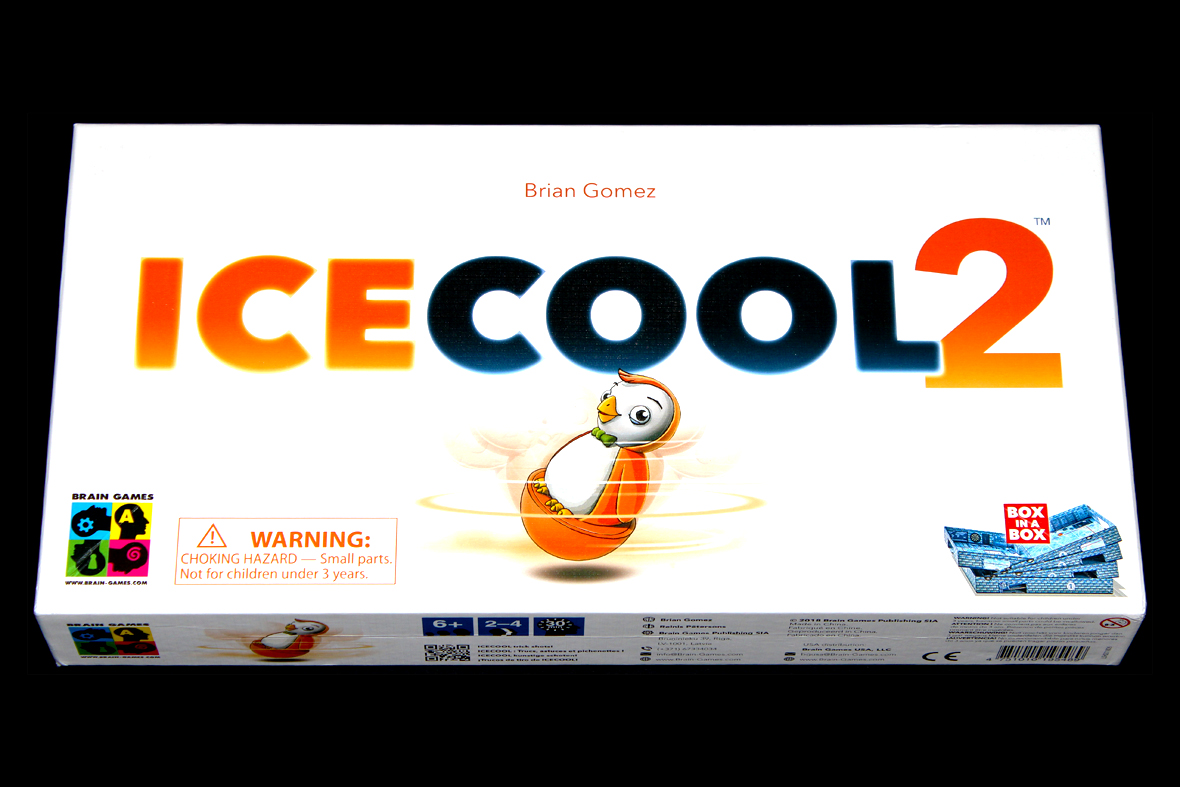 Full disclosure: A review copy of ICECOOL2 was provided by Brain Games.

I’m going to be real with you; if you’re a fan of the site, I’m not totally sure why you’re even reading this review. It’s the sequel to one of my all-time favorite games, and I’ll happily tell you right now it’s not going to be a negative review. Either way, I suppose you might as well read it to hear about the rad updates they’re making? So let’s do that.

ICECOOL2! It’s back to school for another adventure with your favorite overarching type of bird, and there’s more fish to catch (and some new rules to enhance your fish-catching experience). Word on the street is that things can get really fun if you invite the other penguin school to join you on your quest to sneak out of class, but who knows how that’ll shape up. Are you ready to head back to school?

Setup is identical to ICECOOL, though the orientation of the original school layout has been mirrored (otherwise, why not just buy another copy of ICECOOL?). You’ve got boxes, and you have fish that you’ll use to attach those boxes to each other. There are new penguins to be best friends with, so have each player choose one in their preferred color. There are also Penguin Cards and IDs for male and female penguins; take whichever you like best:

Shuffle up the Fish Cards and set them somewhere. You’ll notice the new cards (top row) are slightly different than ICECOOL: 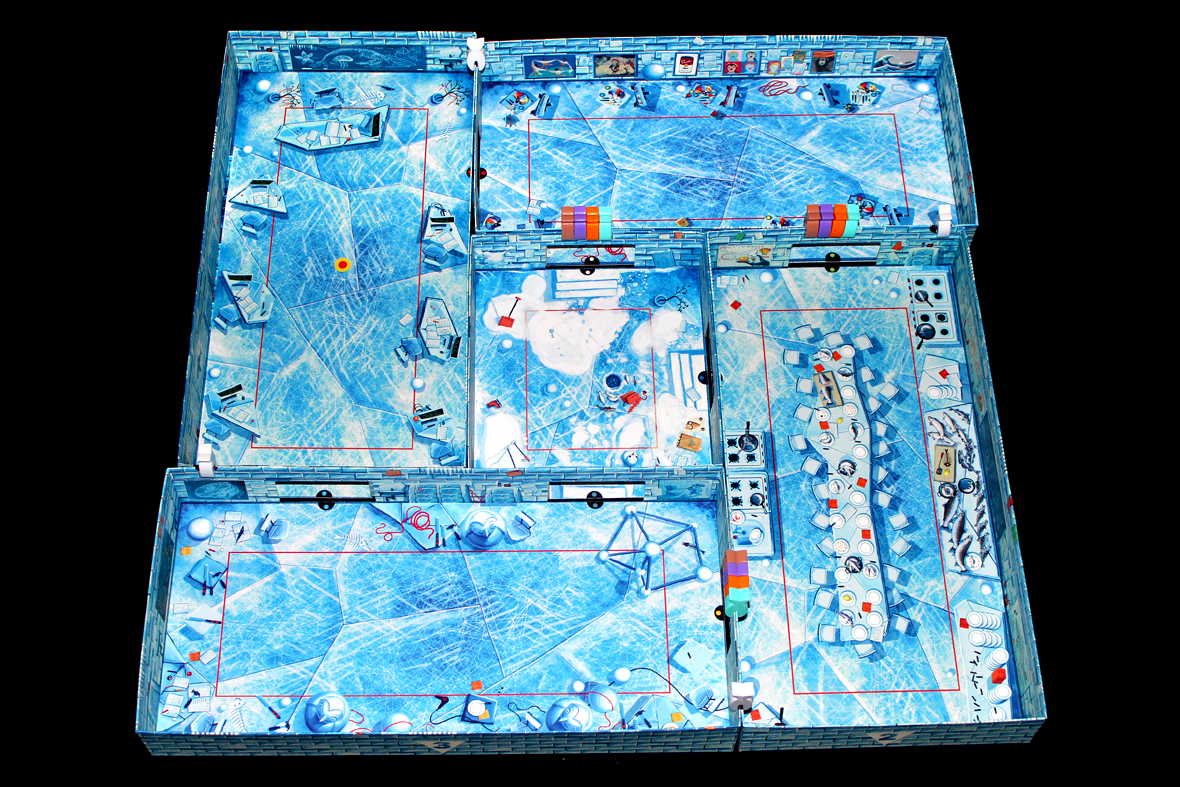 If you combine this with ICECOOL, you can get a variety of other interesting layouts:

These are only three — I didn’t even get photos of the sliding ones! They were too big for my table. Either way, consult the guide and place sets of fish on each of the spots indicated on the guide. If you’re playing Race Mode, you’ll still do this, but you won’t use the Fish Cards.

Once you’ve done that, you should be all ready to start! 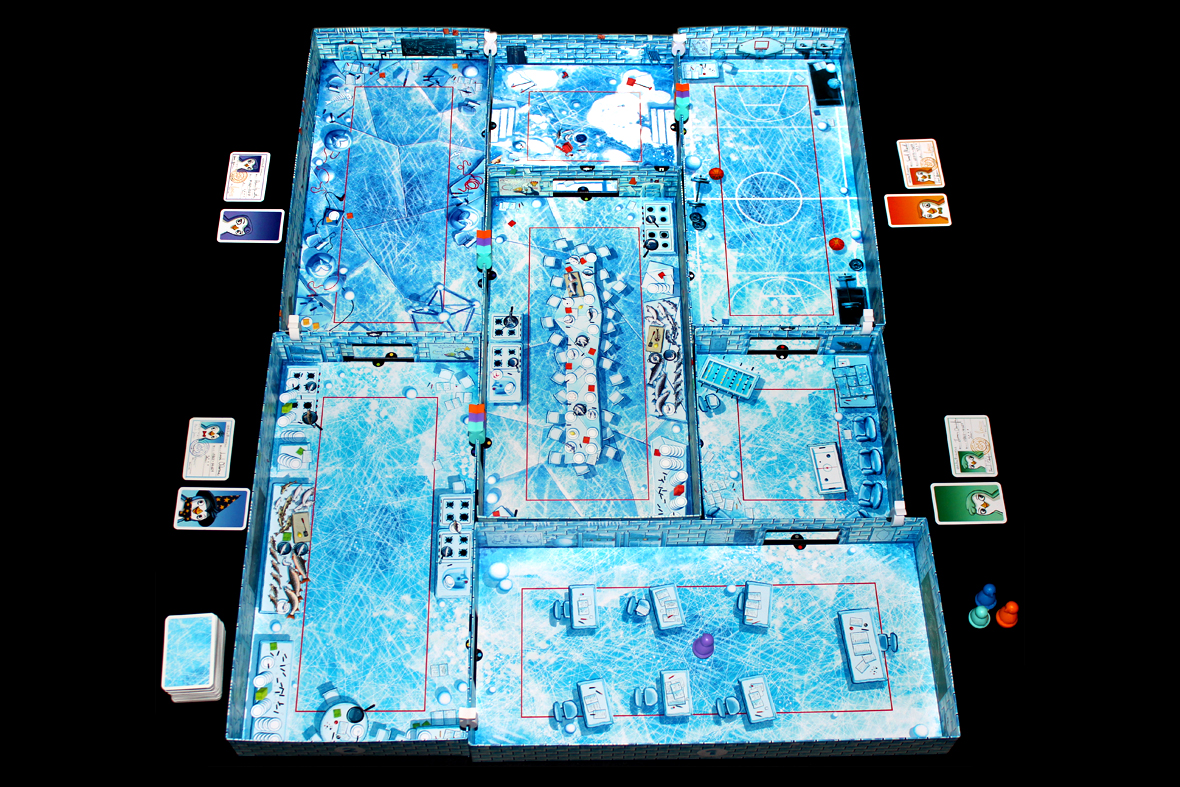 So, with ICECOOL2, the standard game is going to play essentially identically to ICECOOL. You’re not going to see many mechanical differences between the two whatsoever. There are two major things that have been added, though, so let me cover those real fast:

New Fish Cards: There’s a new type of 1 in town, and you can use it a little differently. Just like regular ICECOOL, you can reveal two of them to take an extra turn, but you can also use these new 1s to do Tricks:

There are three kinds of Tricks that these cards can potentially demand:

If you’re feeling bold, you can call your shot (“I’m going to attempt to jump a wall”) on your turn and then try it. If you fail, well, you’re mildly embarrassed, but that’s about it. If you succeed, reveal the 1 and then draw a new Fish Card. That could be another 1, or it could be a 3; either way you still keep the points from your old Fish Card, so, that’s pretty rad. 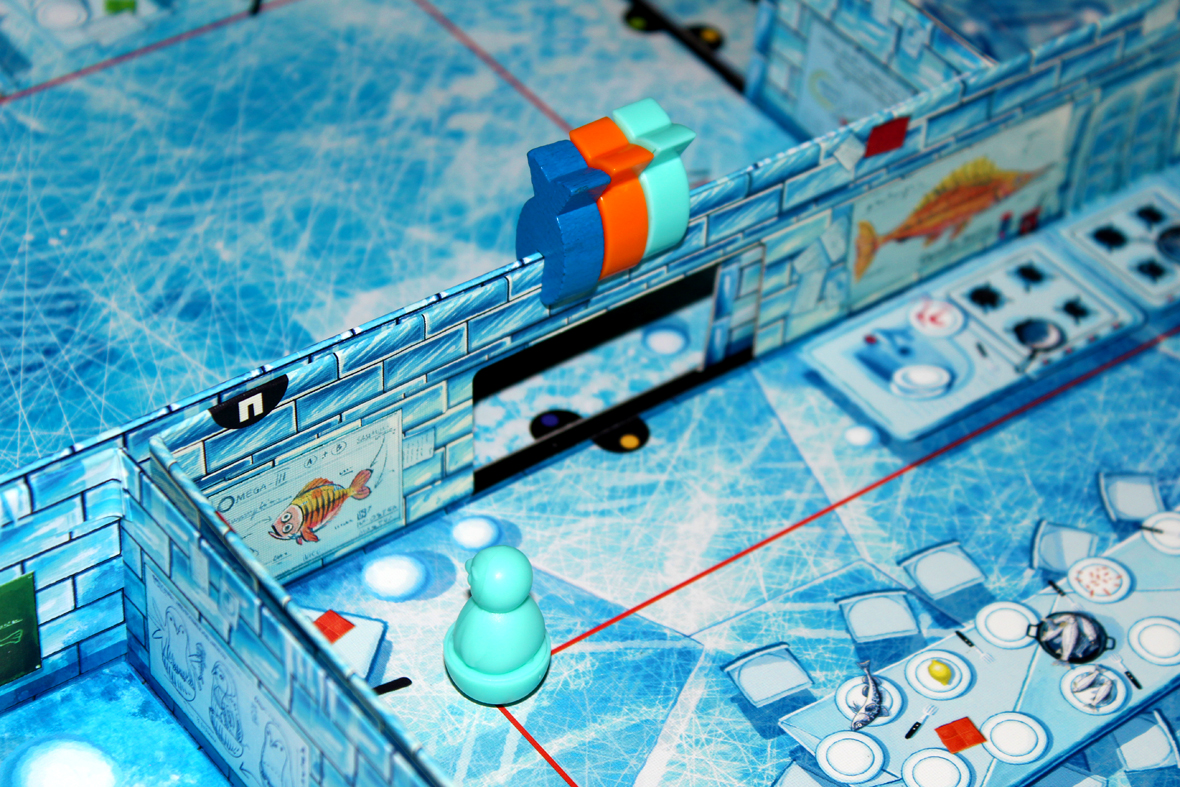 You know, ICECOOL wasn’t totally fair to the poor 2 cards. They weren’t as high-value as the 3s, and they weren’t as interesting as the 1s. They just didn’t have much to do. I’m glad to say that that has changed in ICECOOL2. Now, just like a pair of 1s, you can reveal a pair of 2s to perform an action. This action is very different, however; instead of taking another turn, this action allows you to move a fish of any color to an open doorway. The only condition is that the penguin of that color cannot be in either room adjacent to that doorway. You can even use this if you’re the Catcher to try and prevent a penguin from ending a round too early! That’s always fun.

I’ve buried the lede a bit aggressively, I’ll admit; ICECOOL2, when combined with ICECOOL 1, can support up to 8 players in what can only be called a hot mess (an ice cool mess? unclear). However, there are some new rules to be followed, if you’re playing with that expanded player count (ignore these if you’re playing with 4 or fewer players):

The round ends when one penguin gets all of their fish or when the two Catchers have collectively taken all other players’ IDs. The Catchers cannot steal IDs from each other, though it might be an interesting variant to allow them to do so, if you’re feeling extremely aggressive.

Beyond that, the game is the same as ICECOOL but with different board layouts.

If you’re looking for something a bit less aggressive, Race Mode has now been added! This is a rules-light mode that’s excellent for teaching the mechanics of ICECOOL to players, and it’s played in teams! Here are the basics:

A game will consist of teams of two players (if there’s an odd number of players, assign two penguins to one player) taking turns trying to collect their fish from around the board and then get their penguins to the designated finish line room. The catch is that while both penguins must make it to the finish line, either penguin can catch the four fish necessary to get there! Players will alternate turns hitting either of their team’s penguins to get them where they need to go. This mode also supports up to 8 players, and I find the high chaos suits itself well to that high player count.

Note that in this mode, you won’t use the Fish Cards or any special abilities; all players are on the same playing field.

Uh, well, the new game modes are pretty different in that they increase the allowed player count up to 8 (when combined with ICECOOL). The major thing to note is that both modes will see an aggressive increase in downtime with that many players, especially if some of them are new. I think newer players (at least in my experience) may be slightly vulnerable to analyzing their shots (or maybe that’s just the people I’ve played with; who knows). The key thing there is trying to keep the game moving quickly, as the downtime can be kind of a turnoff to players.

At lower player counts, my one lament is that there’s not really any new maps that are specifically designed for two-players; an Ice Duel, if you will. I’d love to have something like that as most of my gaming is done at a lower player count than it used to be; alas, no dice.

I don’t really have a strong player count preference for this, though I might recommend against teaching 7 new players at once; that will take a while (upwards of an hour, if I recall my last play correctly).

Yeah I love this game. ICECOOL, by itself, was already one of my favorite games that’s come out, but ICECOOL2 manages to even improve on that. The new penguins are great, the new rooms are excellent, and the new modes show that they’re thinking outside of the box with how the game can be approached. Sure, some of the layout things aren’t perfectly lining up for me, but they’re ambitious and it delivers on that ambition with an expanded player count and some new rules to make the game a bit easier for new players. The thing I’d like to see next is for them to go all-in on their ambitions: ramps, weird turns, non-rectangular rooms. I think those things are going to be what takes ICECOOL even further beyond and I’m super excited to see it get there. If you’re looking for a great experience and a dexterity game that’s fun for the whole family (and can frankly support a fairly large family), the ICECOOL series of games is definitely one I’d highly recommend!