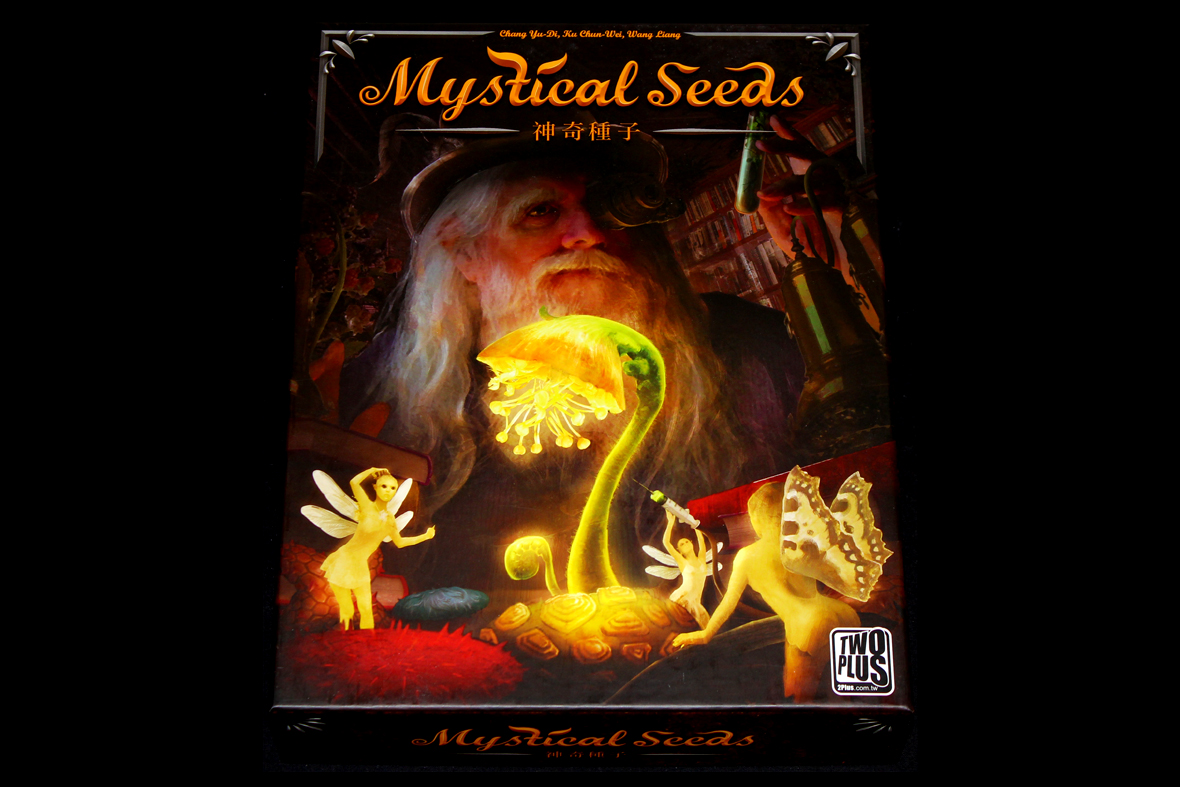 Full disclosure: A review copy of Mystical Seeds was provided by Taiwan Board Game Design.

I’m trying to do a decent job splitting my time / focus between Essen releases and Gen Con releases; it’s going okay. Turns out even at peak efficiency I can only really review about four games a week, and I have enough games in my queue that I’ll need a fair bit of time to get through everything, but there are a lot of exciting games coming down the pipe. One such game is Mystical Seeds, coming from TwoPlus Games out of the Taiwan Board Game Design group. Let’s dig into that, shall we?

In Mystical Seeds, you play as botanists trying to discover the secrets of some new magical seeds and the strange plants they grow. Thankfully, you have helpful garden fairies that are legally distinct from Tinker Bell to help you with this momentous task. Graft, duplicate, and upgrade your seeds to try and create new combinations and new plants to gain prestige and academic acclaim. Will your findings change the way people think about botany?

Setup’s not too bad. You’ll want to build the Garden: 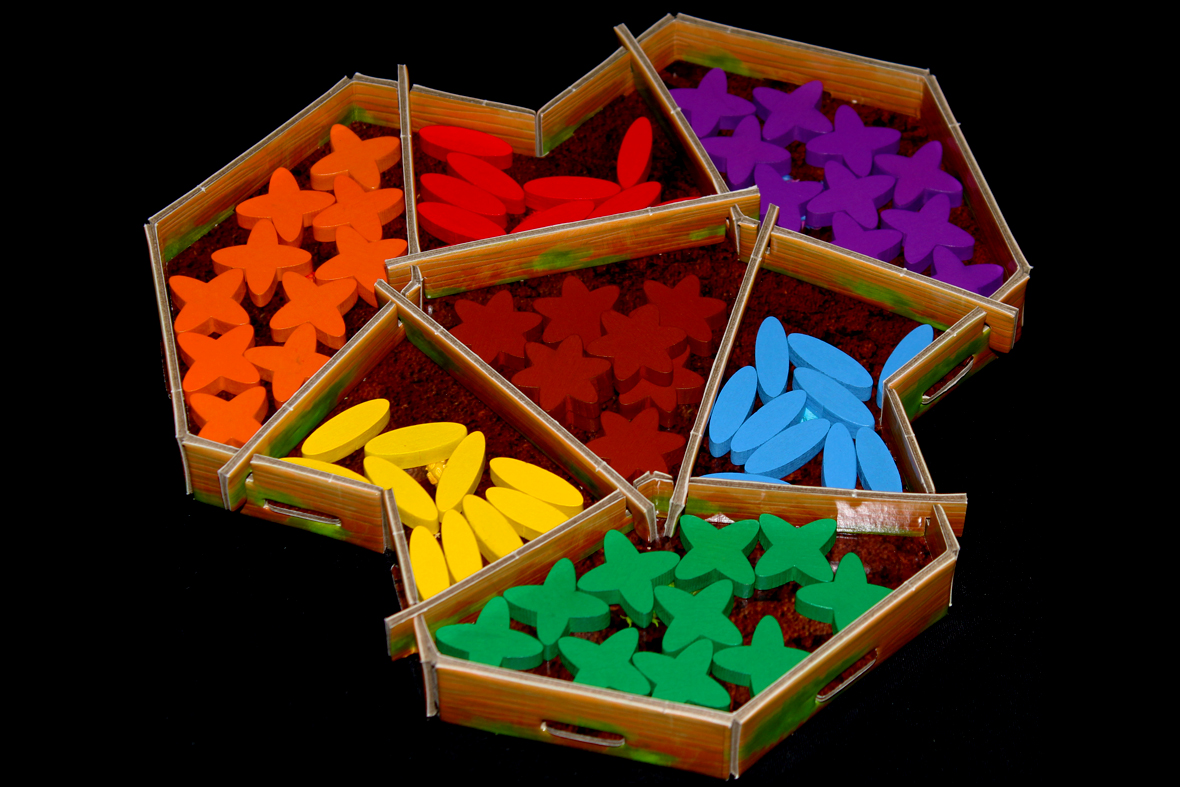 And add the seeds to the relevant locations. Place the three Garden Fairies in the concave areas near the Level 1 Seeds: 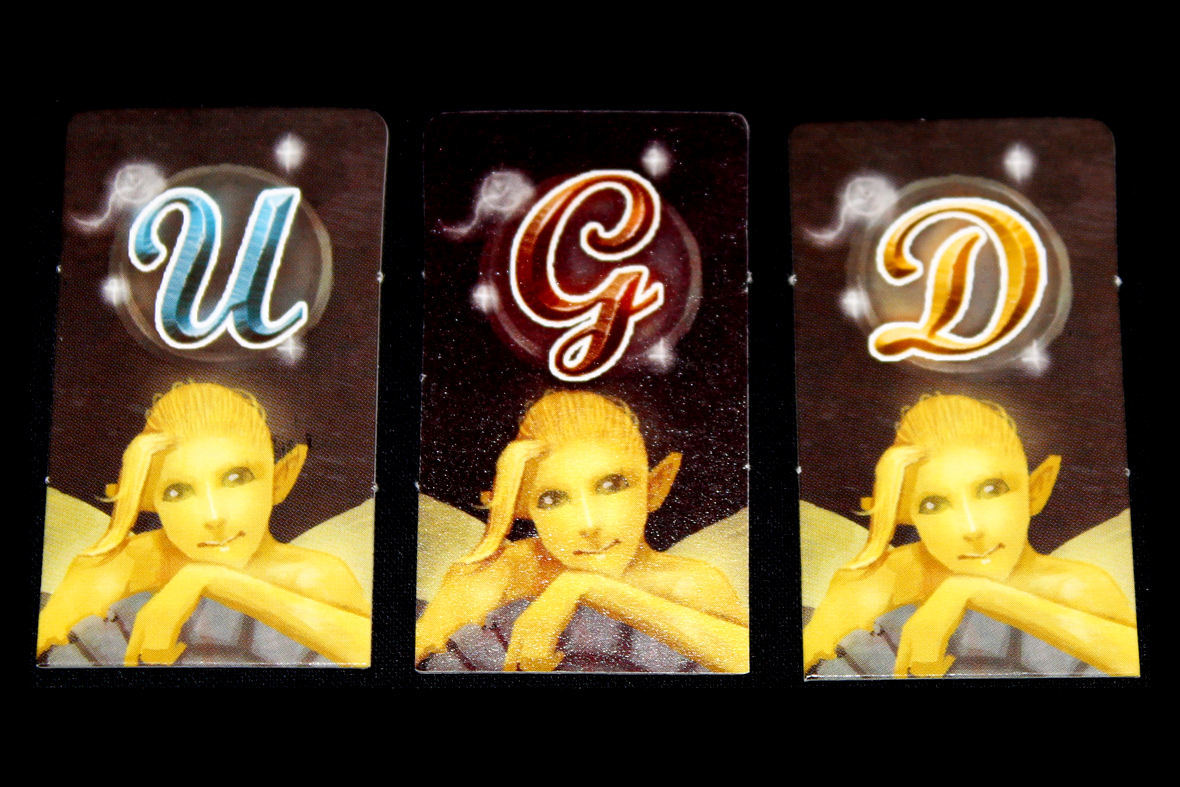 Their order can be randomized. Also, lay out the Bookshelf Board: 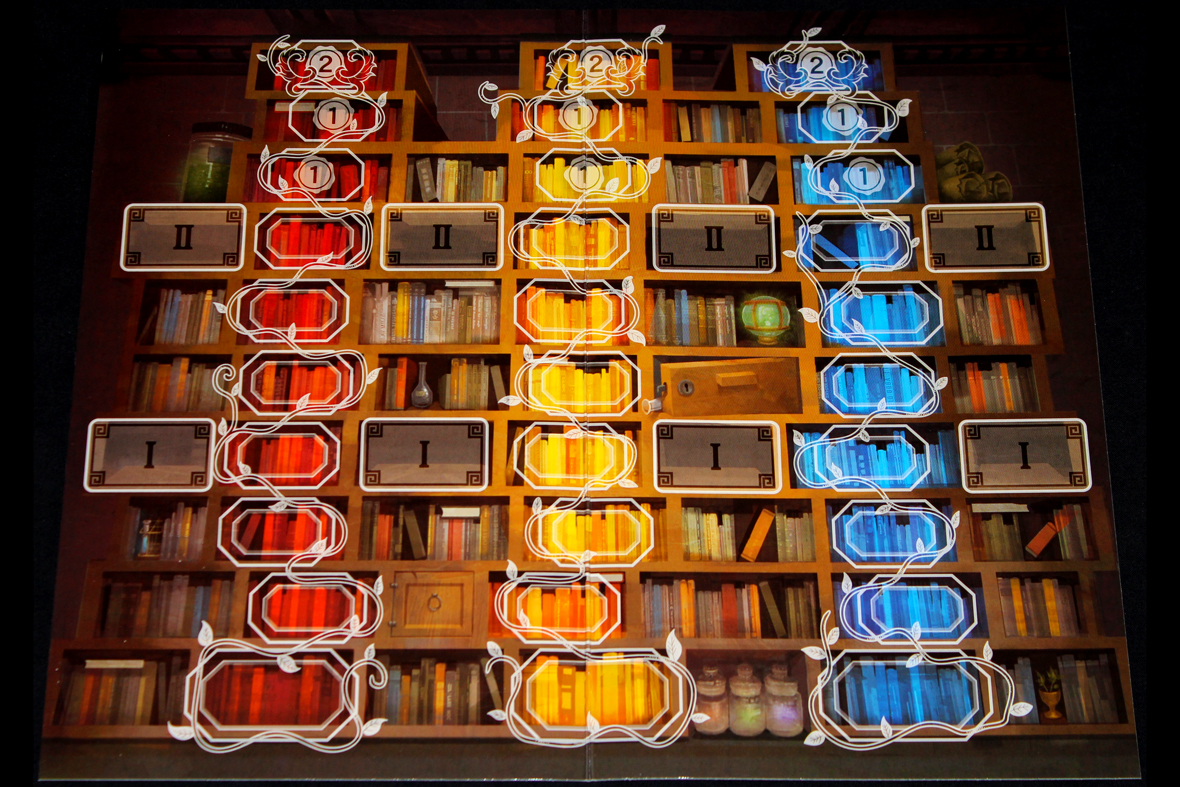 Each player should get a player board, as well: 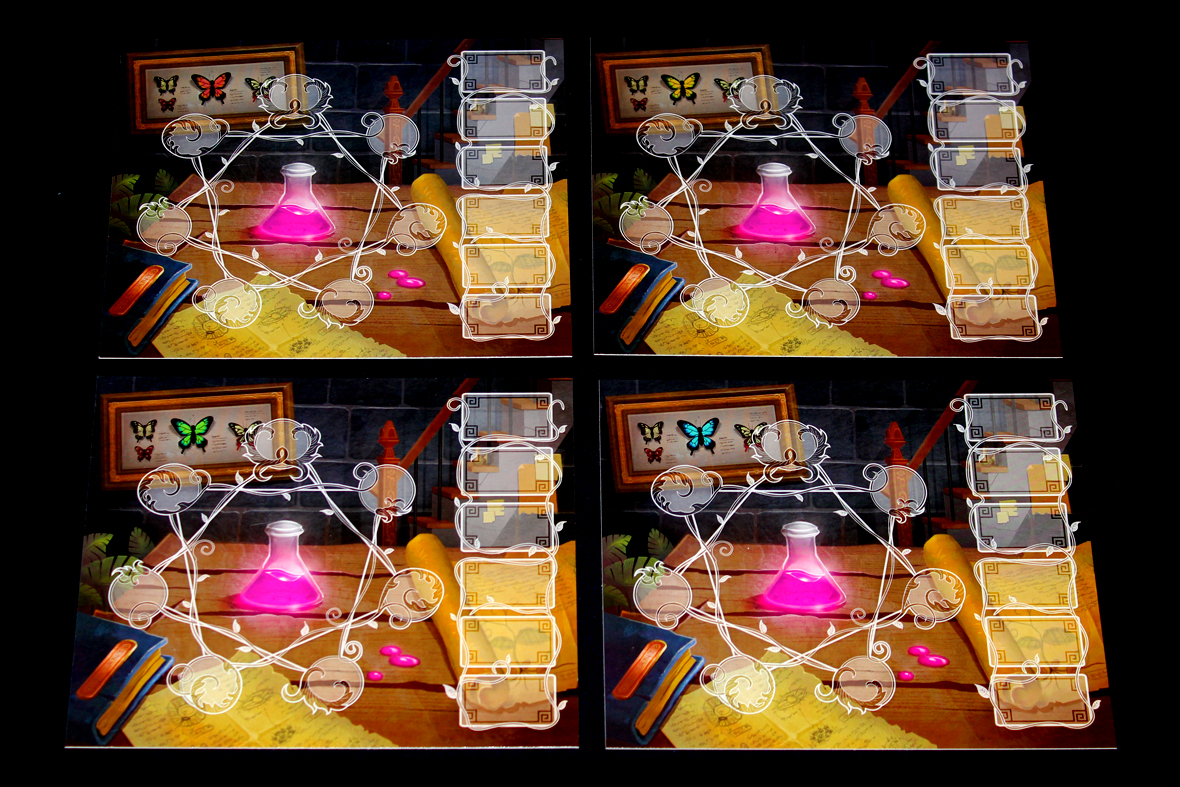 Have each player take four fairies in one color: 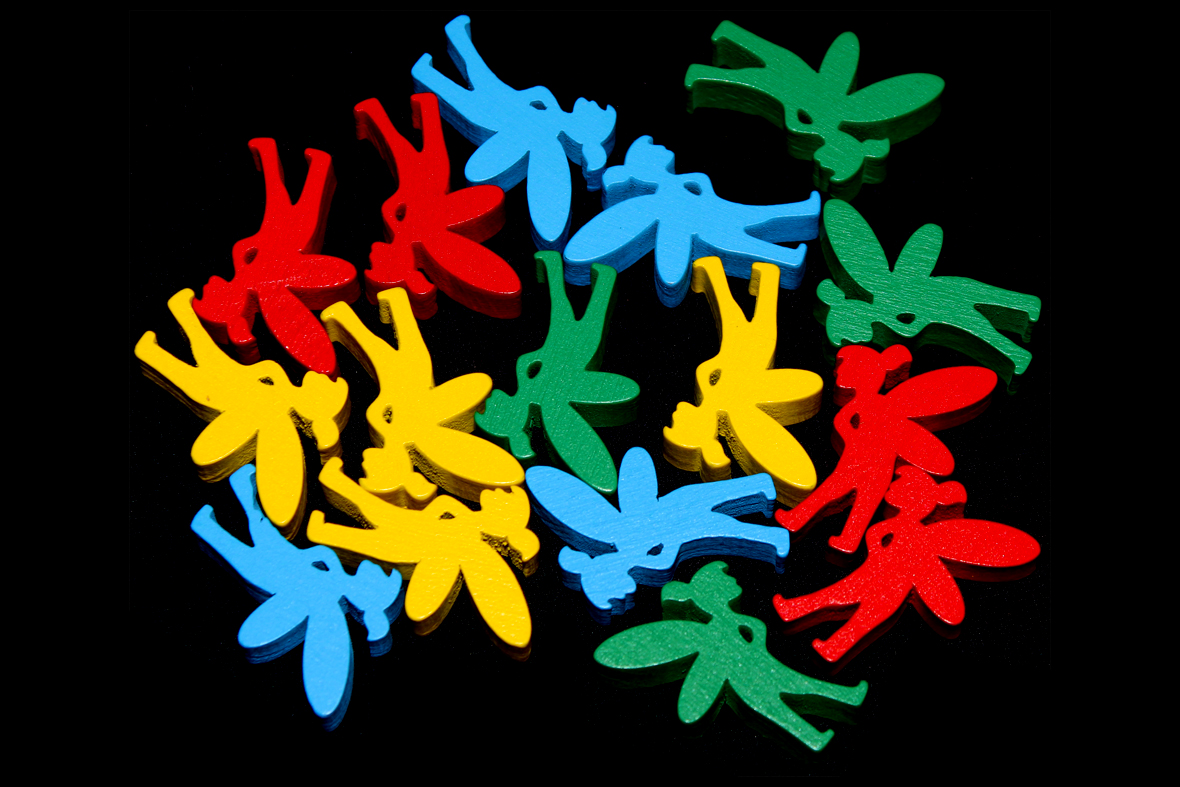 Three of them go on the bottom spaces of the Bookshelf Board, one per space. The fourth goes in the topmost circle of their player board.

Shuffle the Level 1 Cards and deal three of them face-up (full-art-side down) below the Bookshelf Board: 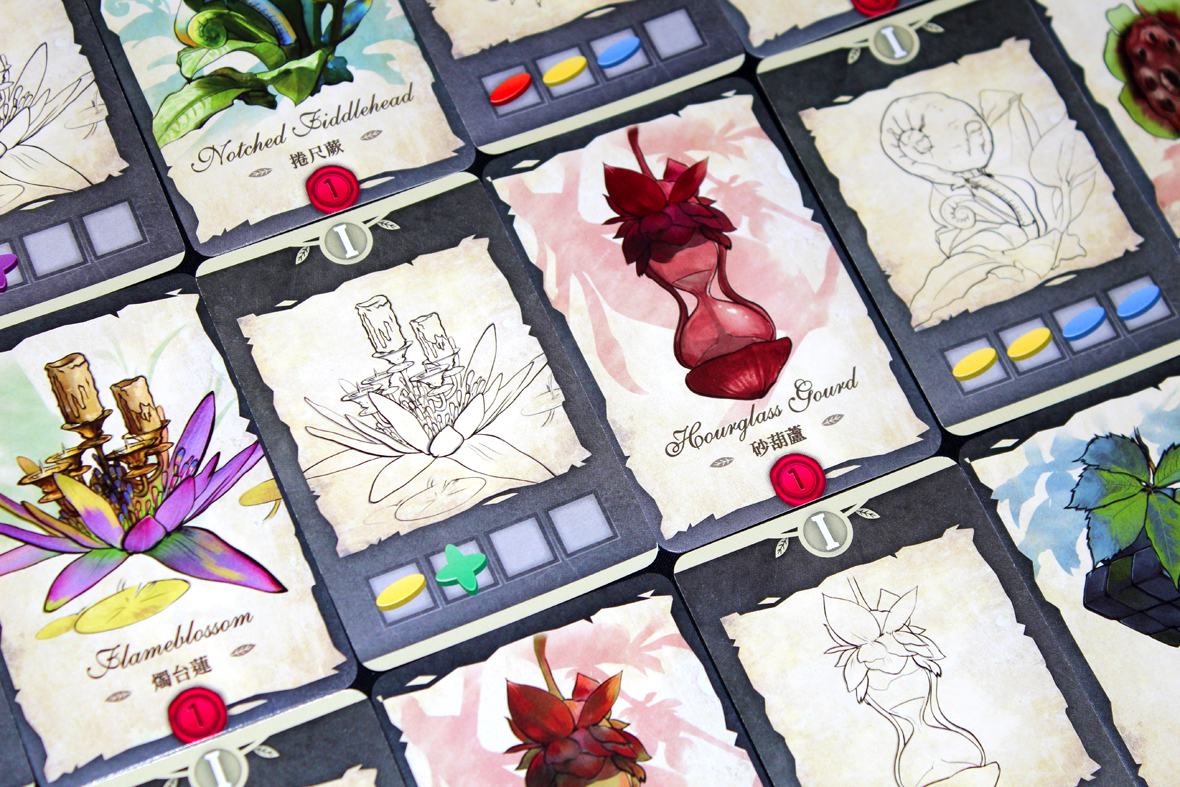 Leave the deck face-up, as well. Do the same for the Level 2 cards: 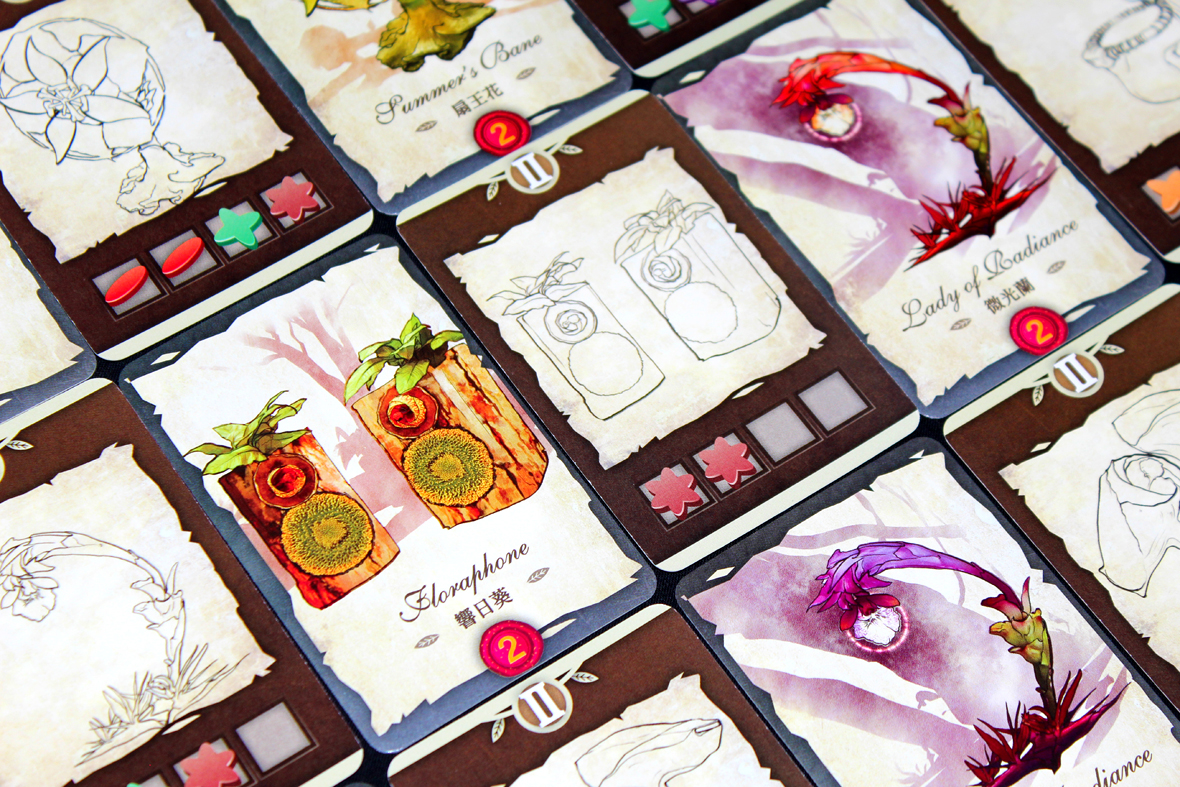 Add four Level 1 Knowledge Tiles to the Bookshelf Board in the indicated spots: 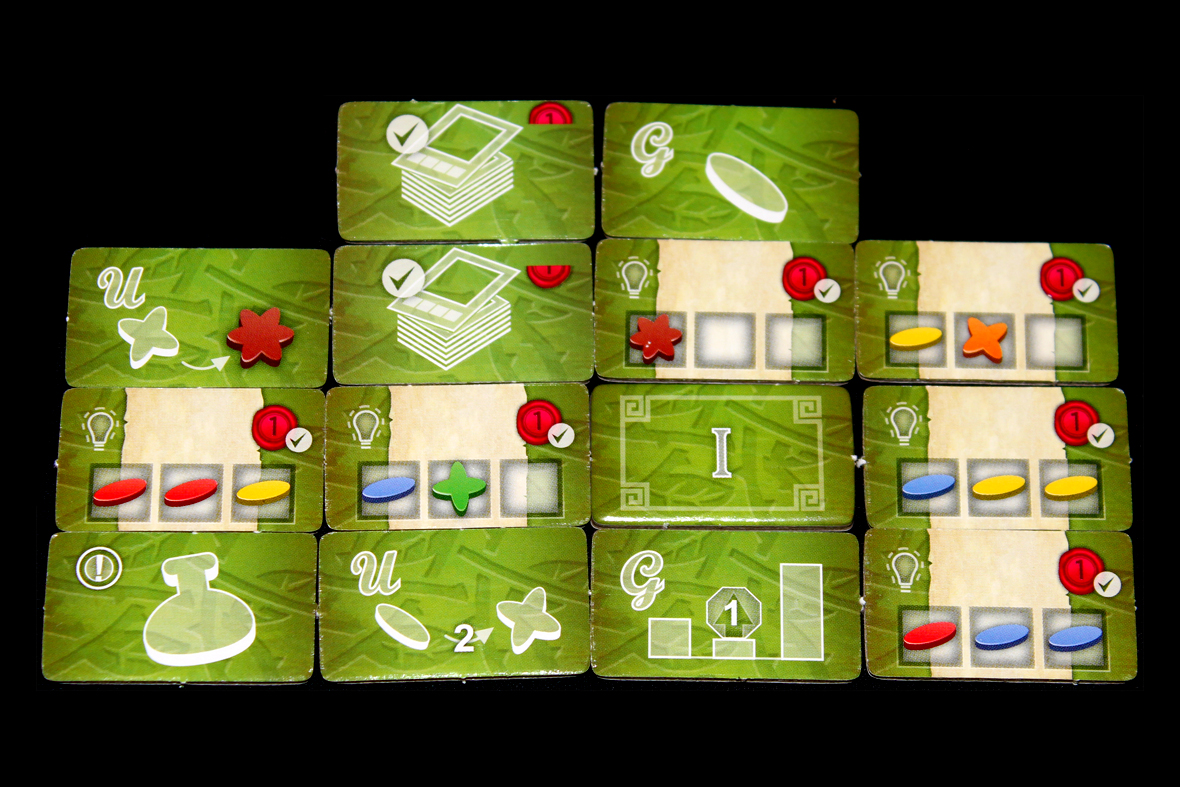 Add four Level 2 Knowledge Tiles to the Bookshelf Board in the indicated spots, as well: 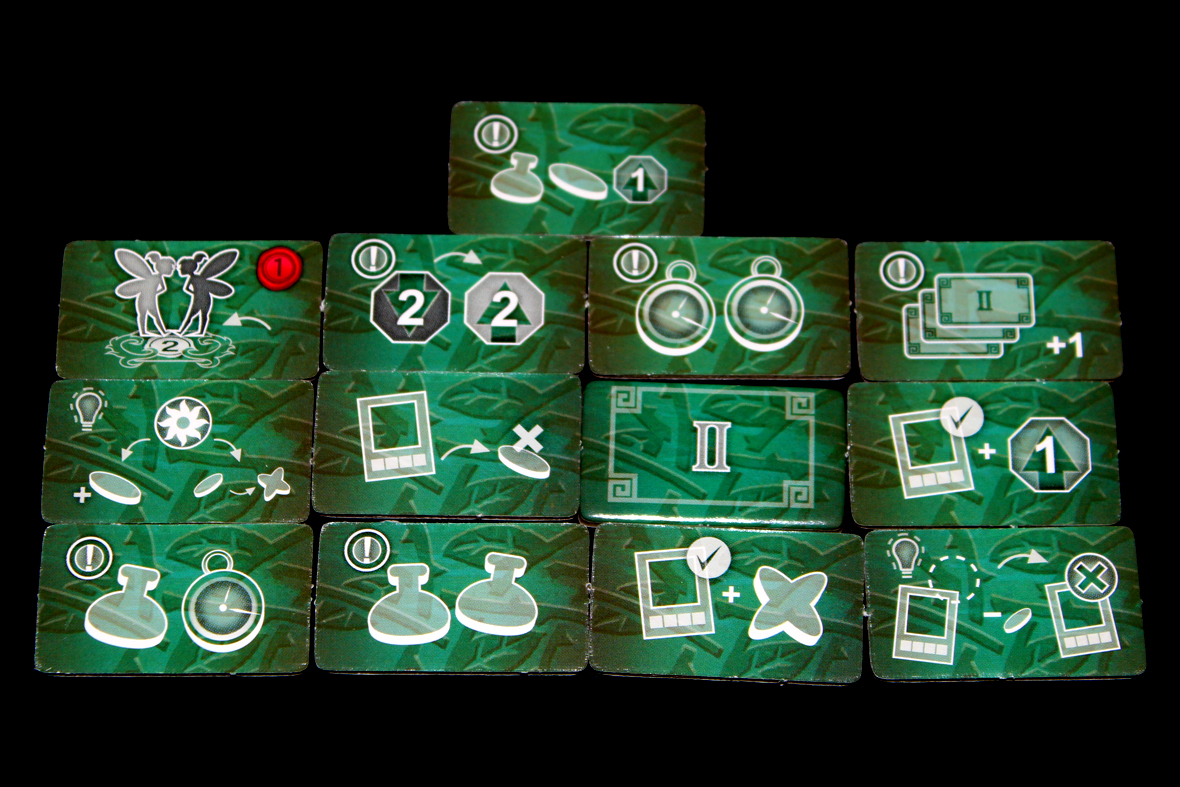 Give each player a Potion: 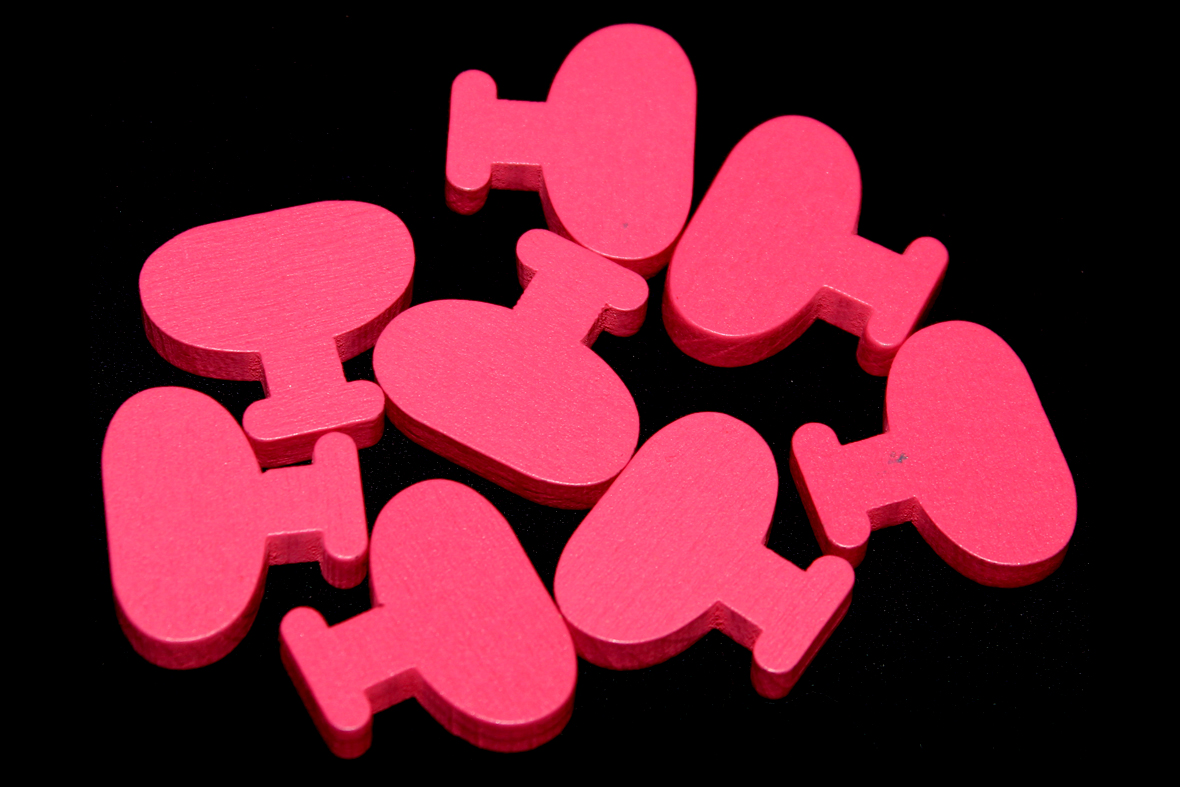 And you can set these tokens aside; you may need them later, but you also might not: 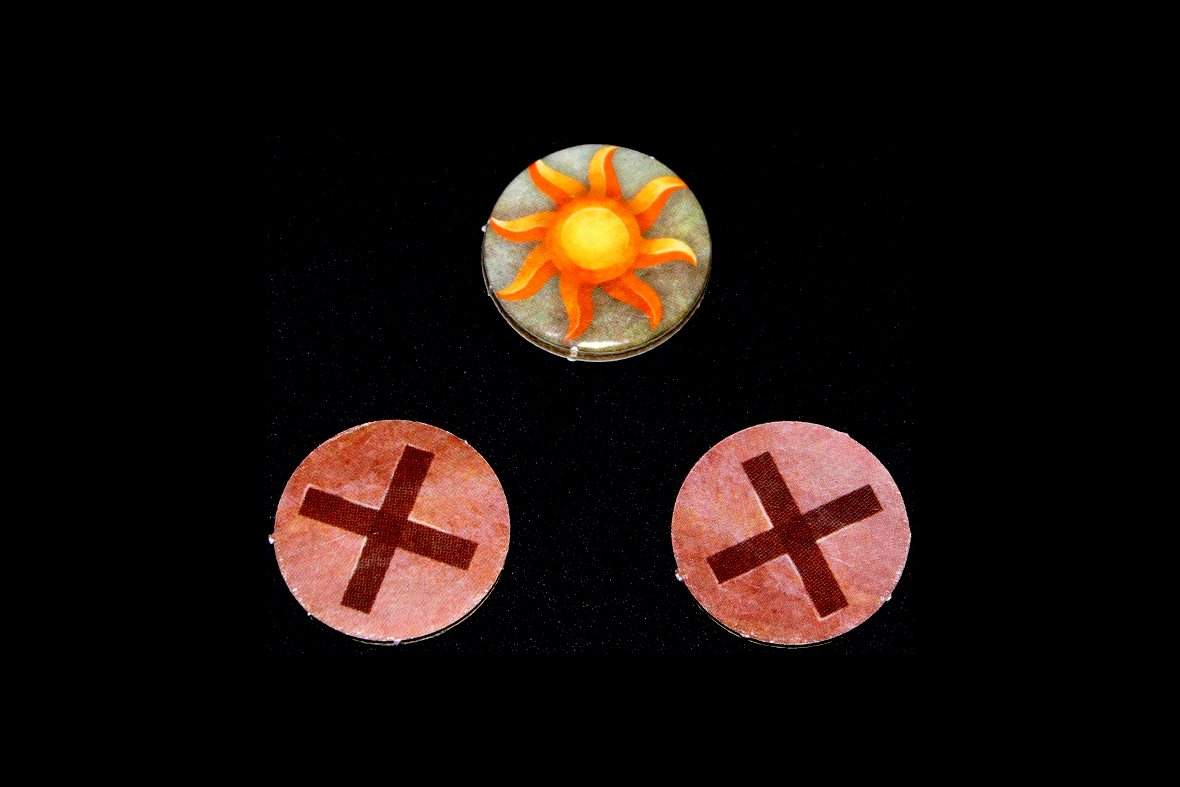 After you’ve done that you’re basically set up! Deal each player 2 Starting Cards: 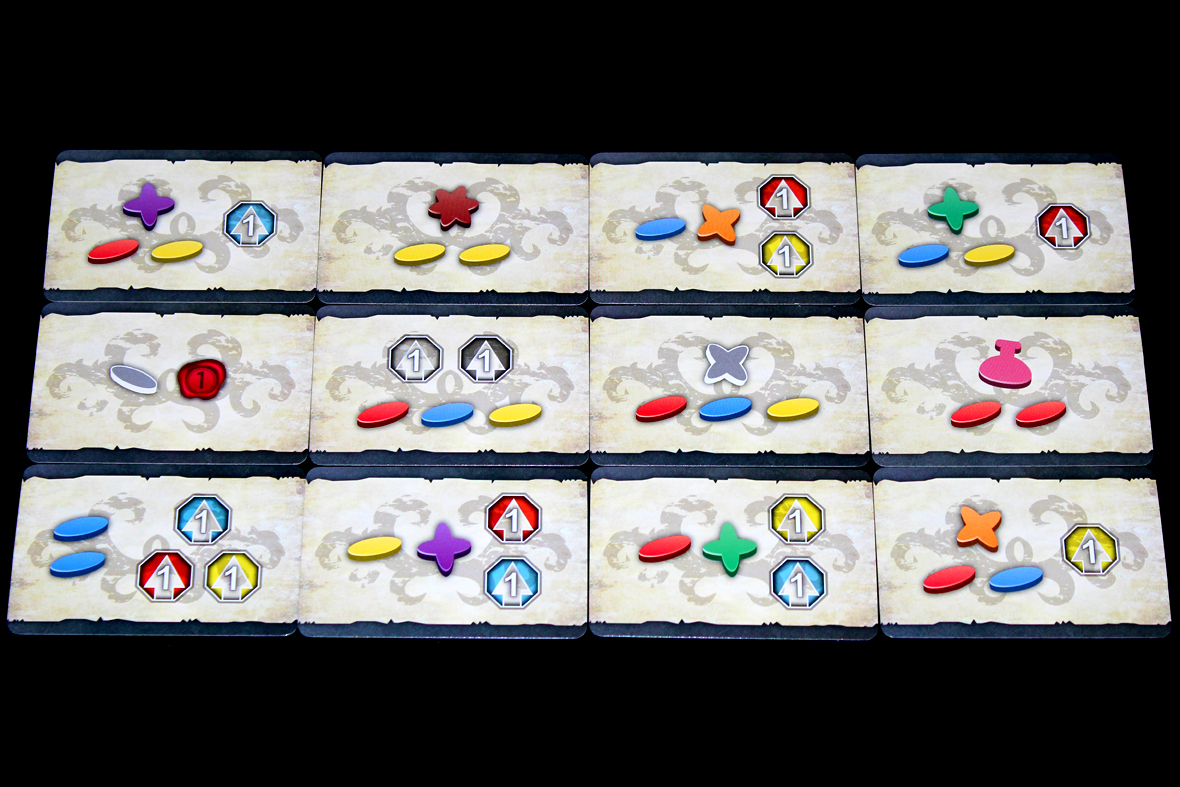 You’re ready to go! Each player should pick one, resolve it, and return the other to the box. 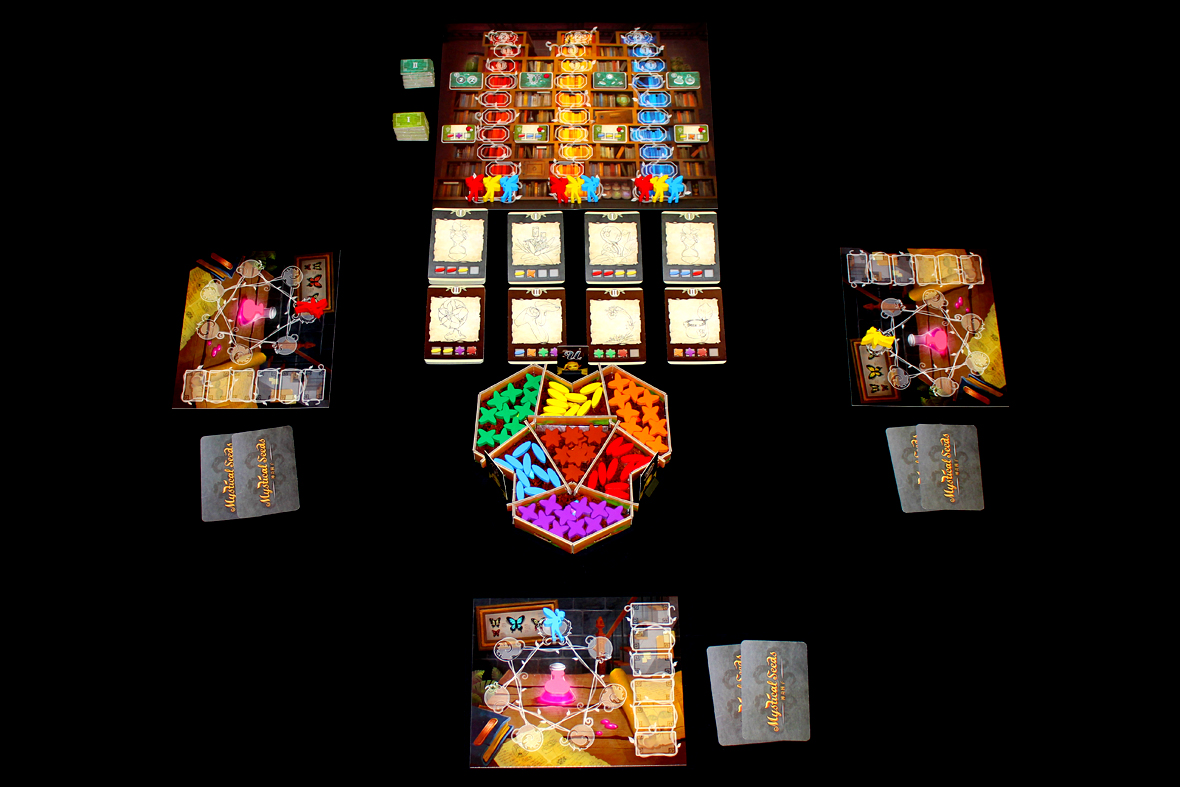 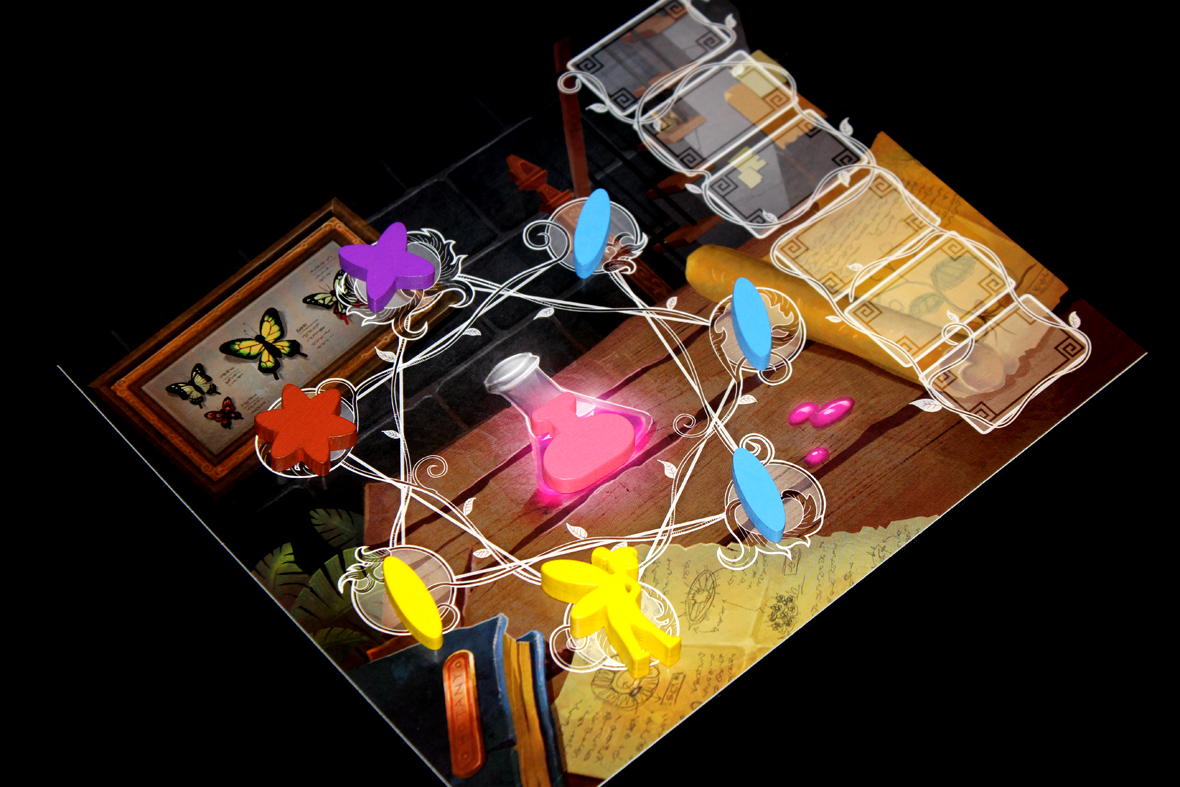 So, like I said, first thing is to resolve your Starting Resource cards. If you gain any seeds from them, place them counter-clockwise starting from the space behind the space your Fairy is currently on. It’s a bit weird, but it’ll make more sense as you play the game.

Your goal is to amass Prestige by collecting seeds and grafting them / upgrading them to see what grows. The more you grow, the more prestige you gain. Whenever a player has 10 Prestige Points, that round is the final round. Whoever has the most Prestige at the conclusion of that round wins!

But how do you earn Prestige? Well, your turn has three Phases: Inspiration, Action, and Cleanup. Let’s talk through each in sequence. 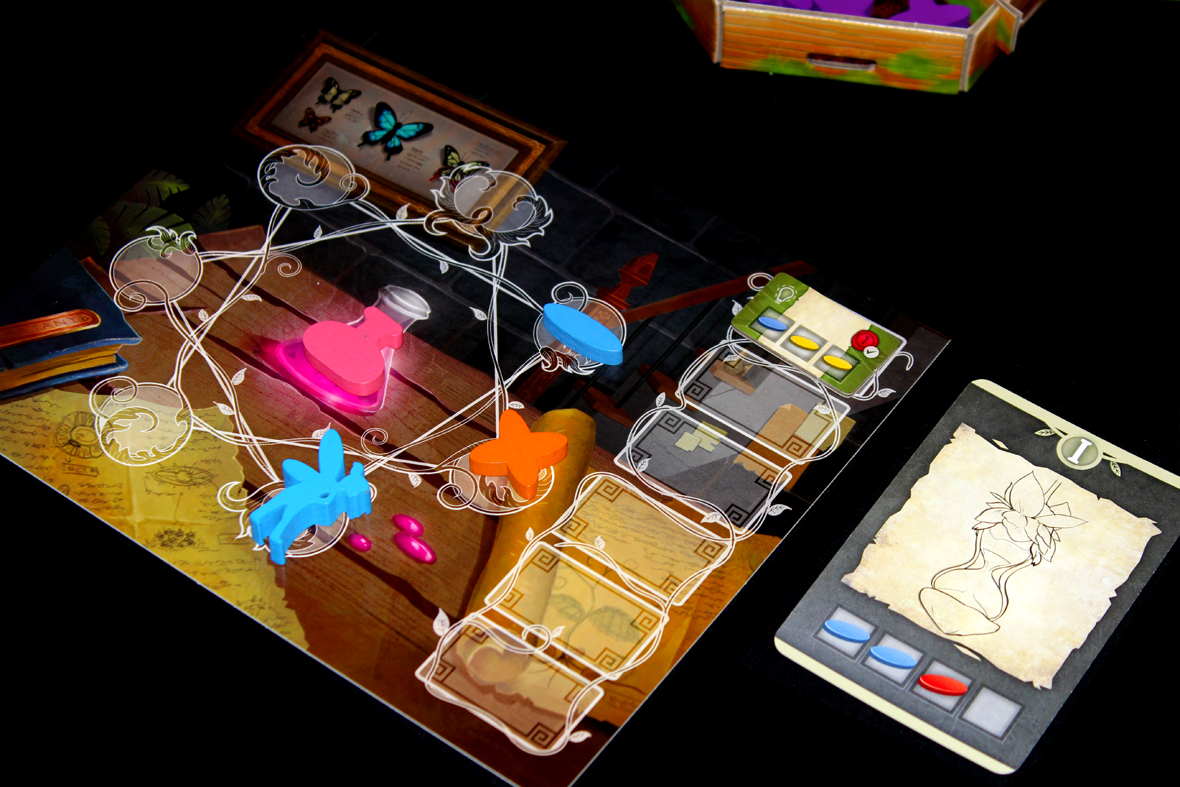 This is the start of every turn; not a lot happens, but other in-game effects can take place during this phase, so it’s important! Barring other effects, during this phase you can do the following optionally, but as many times as you want.

Once you’ve done both, either, or none of those things as many times as you want, you move on to the Action Phase.

During the Action Phase, you may take one of two actions: Collect Seeds and Conduct an Experiment, or Cultivate a Plant. Once you’ve done either, you move on to the next phase. 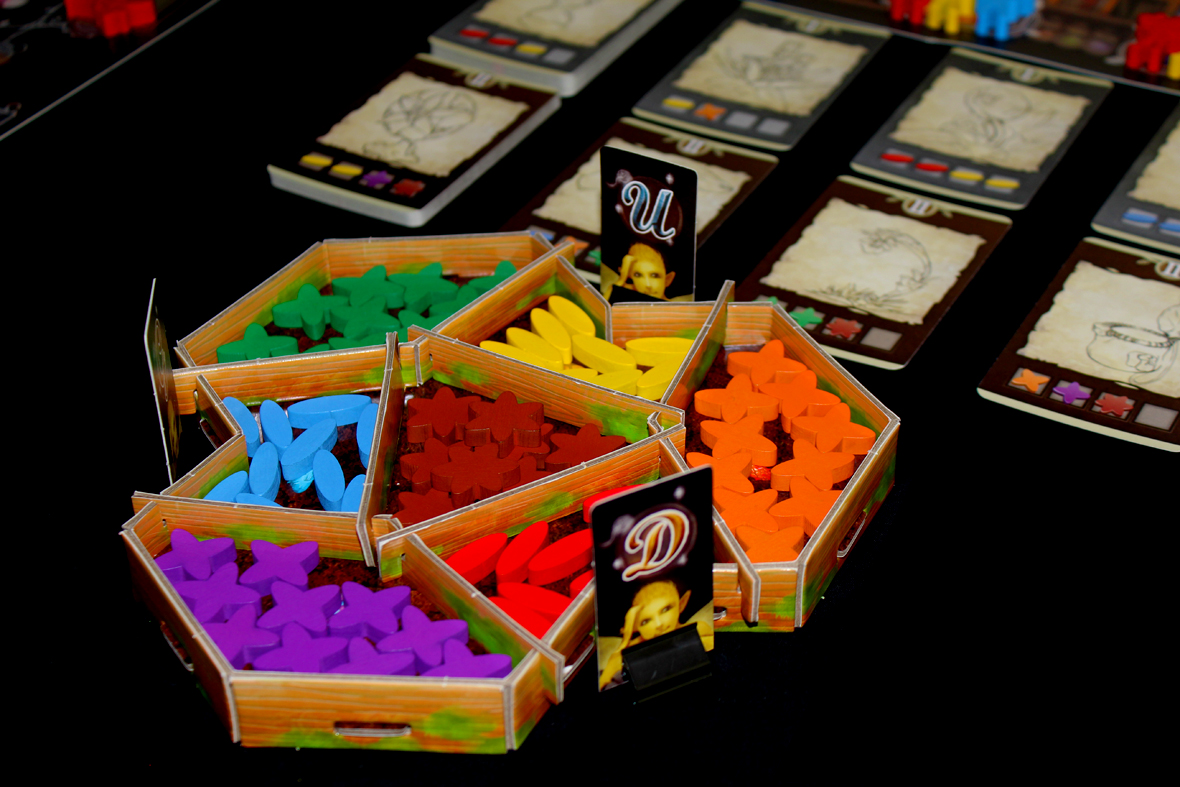 When you Collect Seeds and Conduct an Experiment, you first choose what L1 pool you want to collect from. Then, take seeds equal to the number of Garden Fairies in that pool. If there are 0, well, you can’t take from there. If there aren’t enough seeds for you to take, well, take as many as you can. Add them to your player board, one per space, clockwise starting with the space your Fairy is currently on. If you ever place two seeds on the same space (or a seed on a space where a seed already is, I mean), you must return one of those seeds to the Garden. 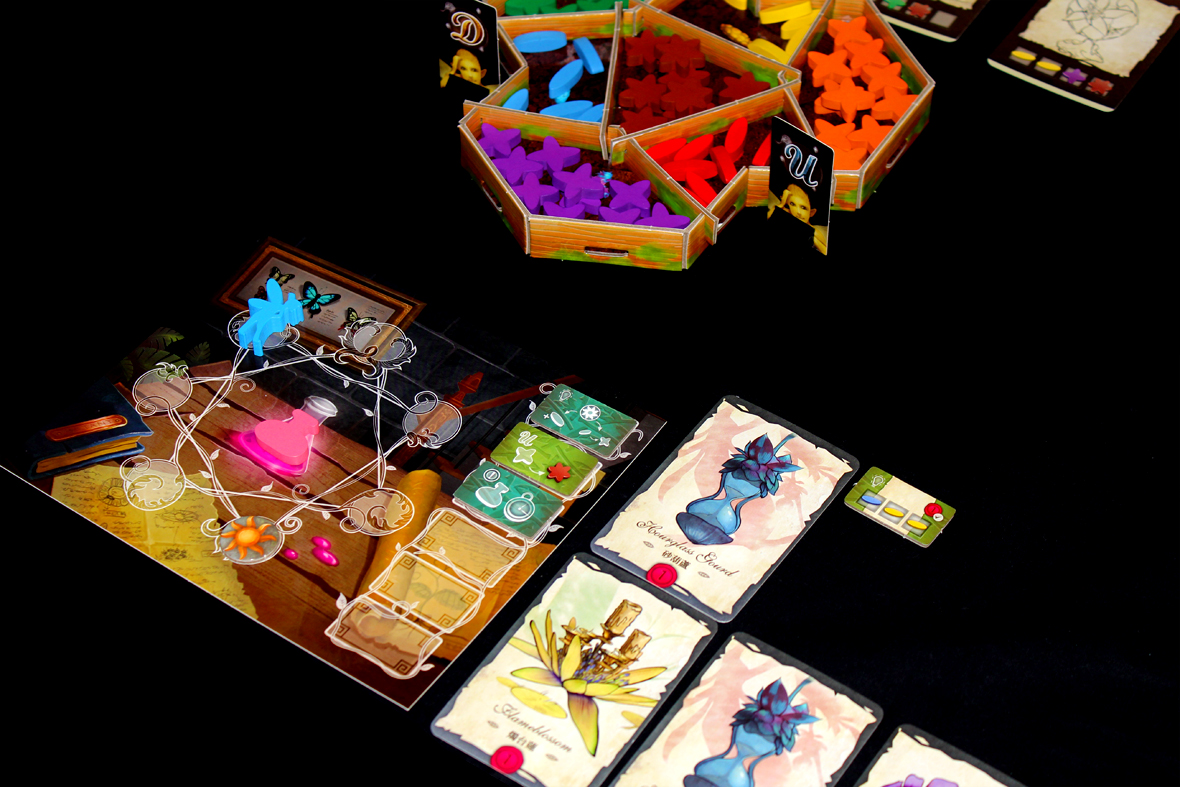 You can instead Cultivate a Plant by taking any of the seeds on your Player Board that match one of the plants and returning them to the Garden. Note that some seeds can be used in lieu of other seeds:

Take the corresponding plant and add it, face-down, to your play area. Before you flip it over, though, check the seeds on the card (not the seeds you paid). Move your Fairies on the Bookshelf Board up one space for each color seed present on the card. Note that just like when you pay for the card, L2 or L3 seeds can count as any one of their component colors. If a brown seed is pictured, you may move any one of your Fairies up a space on the Bookshelf Board. 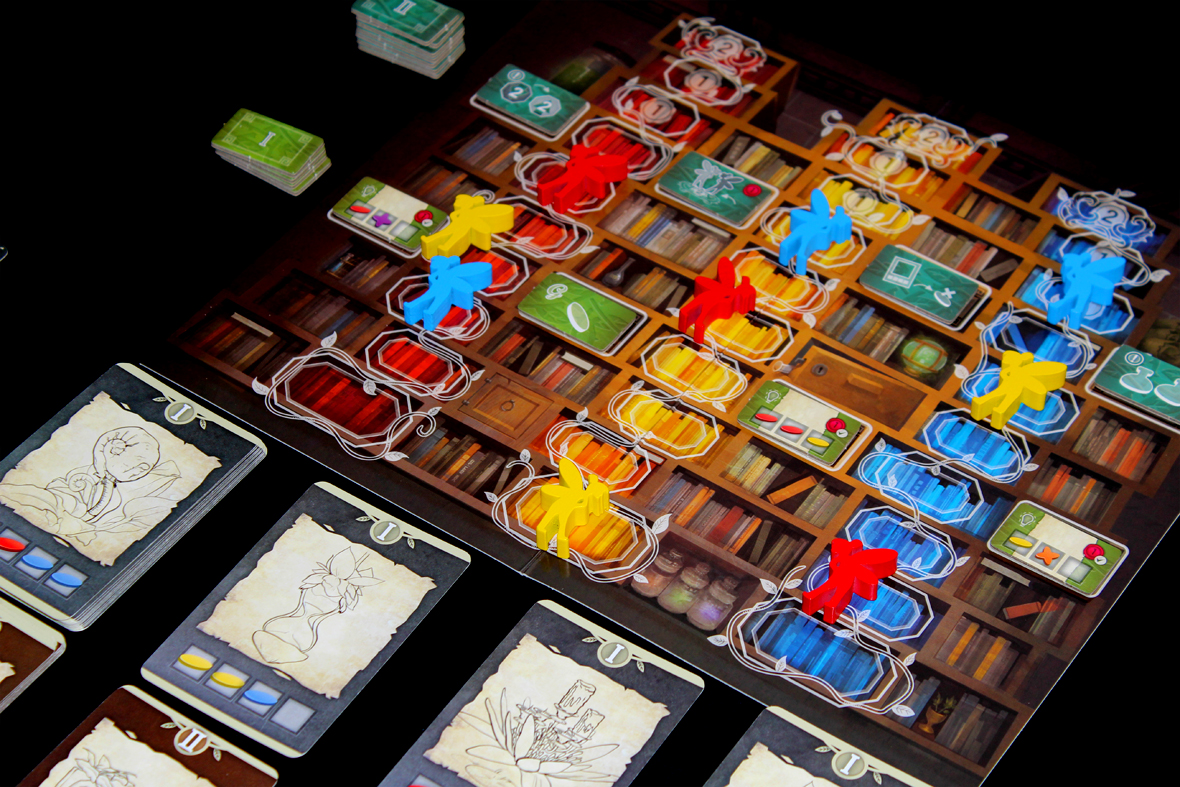 If you pass the 3rd or 6th space on the Bookshelf Board, you may take one of the Knowledge Tiles from either the left or right space. They have a variety of abilities; some count as Flowers that you can only purchase during your Inspiration Phase; others let you gain seeds or Upgrade more than once; and others give you instant bonuses, like taking bonus turns or gaining Potions. They’re worth having, so definitely don’t miss out on them. You can only hold 6, total, though. That said, only one Fairy can enter the 9th space on the Bookshelf Board (worth 2 Prestige Points); if a Fairy is already there, your Fairy cannot enter. Tough, but fair.

Once you’ve done one of these two actions, your turn is essentially over; move on to the Cleanup Phase. 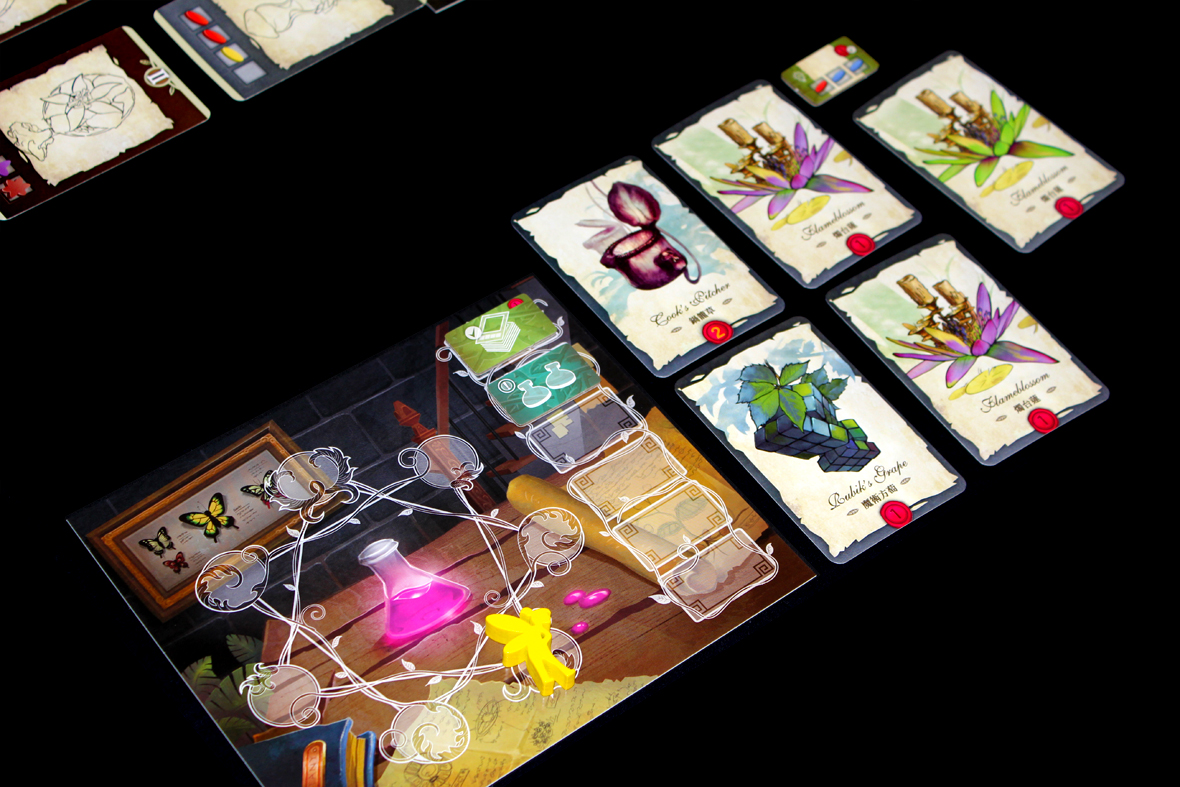 During the Cleanup Phase, you’re basically just resetting for the next player’s turn. You do so by doing the following: 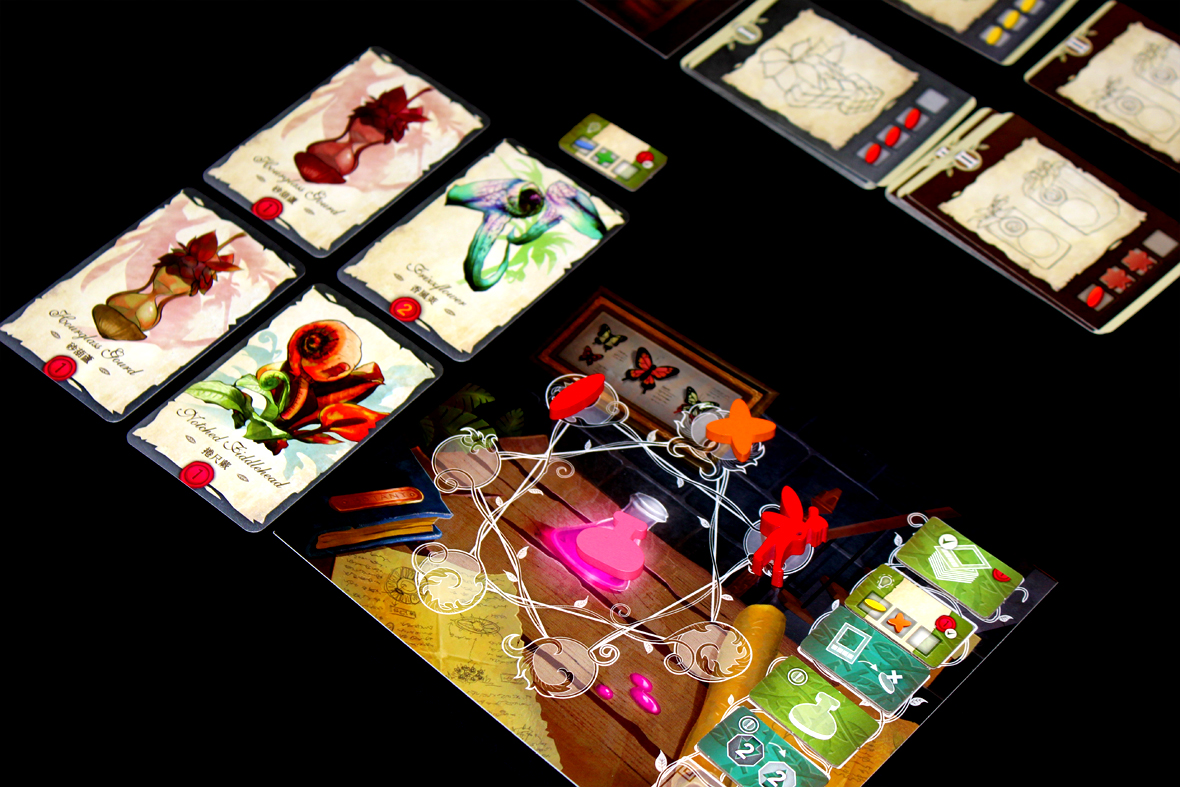 When one player hits 10 Prestige, finish the round so that all players have taken an equal number of turns. The player with the most Prestige wins!

There … aren’t a ton, to be honest. It’s not like there’s a lot of surprises from turn to turn, as usually the most you’ll get off a turn are two or three seeds (that’s not zero, but it’s not a ton, as far as purchasing power goes). I think the major difference is just downtime on your turn. If you have players aggressively analyzing future moves, the game can take a while to play. To that end I’m probably most likely to play it at two or three, rather than four. 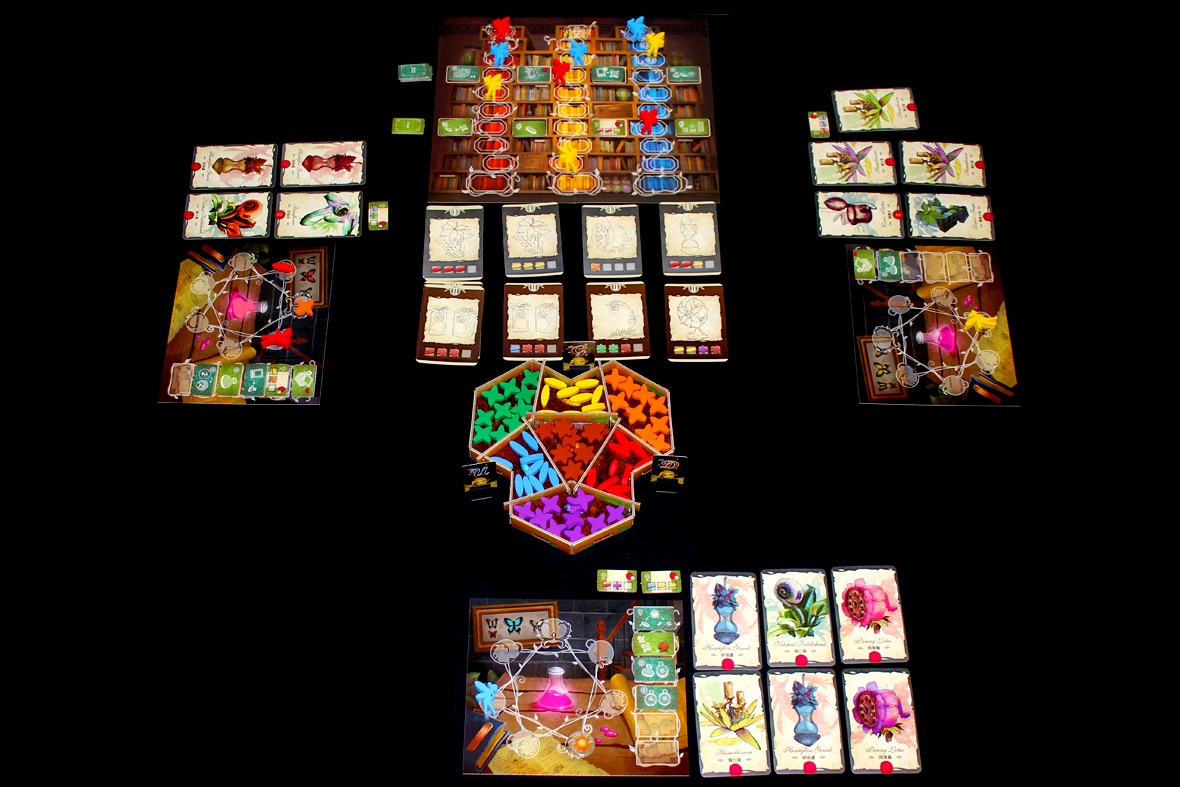 Overall, Mystical Seeds is a solid game! It’s got a lot of cool things going for it, from the Garden construction to the color combinations and shifts required to buy the cards that you need, which are both things I’m a big fan of. The art is astonishingly good, managing to be a bit realistic and a bit fantastical at the same time, which is great. Plus, it’s a fun theme! We’ve done magical libraries, why not magical gardens, as well? Though now I want to see what other “put magic on it” themes you could have for games and how that would end up. Either way, if you’re looking for a colorful puzzley challenge or you’re interested in a game with a great theme and some solid art that’s not too challenging to pick up, Mystical Seeds is coming out at Essen!