Full disclosure: A review copy of Pikoko was provided by Brain Games.

The last of the Brain Games! I’ve been reviewing a fair number of these over the year — ICECOOL a bit more than a year ago, Orc-Lympics, Pyramid of Pengqueen, ICECOOL2, and now Pikoko. It’s been an exciting year for them, and I’ve been excited to check out a lot of their stuff. Who knows what’s coming down the pipeline next? I’m just hoping it’s Ice Cool 3, as always.

In Pikoko, you’re uh … peacocks? That’s about it, honestly. No real lore for this one, as far as I can tell. But you’re showing your opponents your feathers (instead of you), so you’ll have to be a bit creative to win this trick-taking game where you can’t see your own cards. Will you be able to come out on top in this colorful competition?

Well, the first thing to do is set up the birds:

Every player gets a bird, and a set of betting tokens in that color:

Also give each player a set of Confidence Cards in that color:

Speaking of cards, remove a few based on your player count:

Deal each player 8 cards. Now, set aside the scoring sheet: 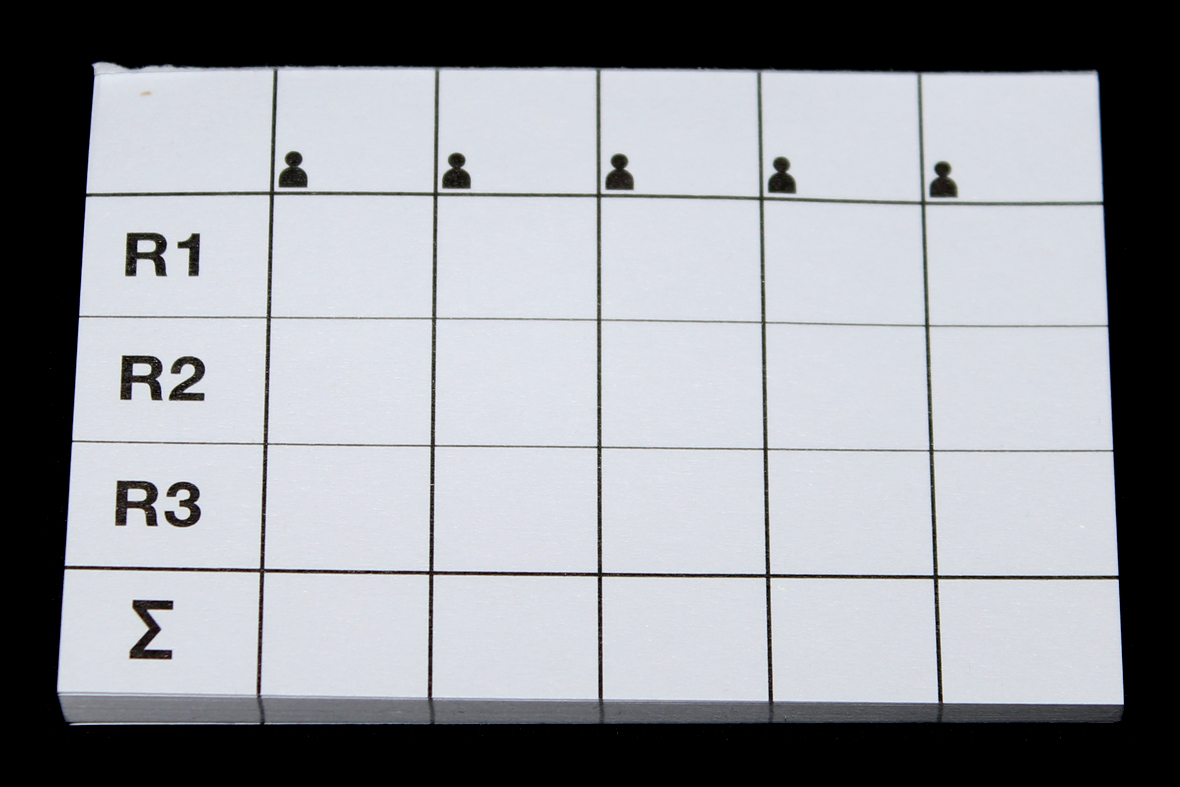 You’re ready to start! Have each player put them in their peacocks facing outwards; no player should look at their own cards.

Pikoko adds a common variant to that. Flip the top card of the cards that weren’t dealt. This card is known as the trump suit. If the card is a multi-suit card (has more than one color on it), then there is no trump suit for this round. In a trick-taking game with trump suit, the following is the new set of rules:

Got it? Cool, that’s a basic trick-taking game. Let’s add another complication: those multi-suit cards. A multi-suit card is the color chosen by the person who plays the card, except in one case: if the multi-suit card has a led suit as one of its colors, it is considered to be the led suit for all purposes. That means if it’s the only card in your hand of that suit, you must play it if that suit is led, and it must count as that suit, even if it could also be trump.

That sums up the multi-suit cards. Now for another wrinkle: you don’t play your own cards. Instead, you play the cards of the player on your left, known as your target player. Every player has a target player and that will be the same person for the whole game. Note that I specifically worded some of the above explanation so that it still works, even with this realization. If you’re playing a multi-suit card from your target player’s hand, you choose what color it is, if you can. If your target player wins a trick, you start the next trick with another card from their hand. That’s the whole trick-taking game of Pikoko!

However, that’s not complex enough, so let’s add one more thing; the bets. You’re not scoring based on the tricks you win; instead, before the round, every player (starting with that round’s Start Player) will be bid on by the other players. The bid is how many tricks, based on that player’s hand, you think they can win. Everyone has 9 Bidding Tokens, and there are 8 Tricks to be won. You’re welcome to overbid, as you’ll still score a bit if you’re close. Do not bid on yourself, yet. Have each player select their bid for the player, and then reveal them all simultaneously. Once every player has been bid on by every other player, every player simultaneously bids on themselves; based on what you know about everyone else, how many tricks do you think you’ll win? It’s definitely challenging.

After you’ve done that, one last thing before you can start. Have each player take a Confidence Card from their stash. These represent which bid you’re the most confident about (if it’s none, use the +1 No Confidence Card). Play one of these secretly; don’t show it to anyone.

Once that happens, you’re ready to start the round with the first trick! Have the Start Player pull a card from their target player’s hand and play it face-up. That starts the first trick. Keep playing tricks until all 8 have been played, and then move on to Scoring for the round.

Each player now checks to see how they did:

Hm. I actually like playing it at odd numbers because 8 isn’t evenly divisible by 3 or 5. You could argue that 9 is, sure, but I try to never bet 9, so that’s not really something I regularly think about. The major difference is that as you increase your player count, you’re using more cards, but even that doesn’t matter … all that much. It increases the variance of a single hand, sure, but it doesn’t impact gameplay all that much.

It does, however, increase the game’s runtime. I’d recommend slightly against teaching this to five new players unless you want to sit there for a while. Start with three or four and work your way up to it.

Overall, I’m pretty into Pikoko! I like trick-taking games a lot just on principle, but this kind of flips it on its head — it’s not just a trick-taking game anymore! It’s a betting metagame for a trick-taking game, which is kind of fascinating. I still haven’t dug into all the strategic implications for a game like this, but I’m really interested in what kind of takeaways you can get from this. Are there ways to add a bidding metagame to other games that seem pretty simple? Imagine a tile-laying game with a similar mechanic; doesn’t it sound kind of interesting? I dunno, something about the aggressive spin put on a fairly straightforward concept is really appealing; it’s inventive. By itself it’s just kind of a trick-taking game where you know more other players’ hands, but adding the betting mechanic means that now you’re trying to figure out how to use the framework of trick-taking to bait them into bad moves or force them to make plays that benefit you, and that’s super cool! Maybe I’m overthinking it; who knows. Anyways, if you like trick-taking games and are looking for something new, I’ve had a lot of fun with Pikoko! Would recommend.