I actually don’t play that many tower defense games, weirdly enough, or solo games. The last game I really solo’ed to any degree was Unbroken, which was a while ago. I guess Jabberwocky had a solo game in it, sure, but the most I’ll solo is playing a few open-information games against myself to get a feel for how the game is played with and against different strategies. It’s weird but it gets the job done and I often feel more comfortable reviewing a game after that. That said, I do occasionally take on some solo games, and so to that end let’s check out Fantasy Defense, a 1- or 2-player game from Nice Game Publishing, who also brought us Terrible Monster, reviewed just a couple weeks ago.

In Fantasy Defense, the orcs are coming! They’re gonna just … ruin your city, and you’d prefer to put a stop to that. Rather than ask them what they want, you’re going to jump to conclusions and take them on with either humans or elves to do them up a ridiculous violence. Be careful, though, as going it alone is … ridiculously difficult. May be best to bring a friend along for the ride. Will you be able to save your city? Or will everything change when the orc nation attacks?

So, first thing’s first: if you’re playing solo, remove everything with a 2P on it from the game and set it aside; I’ll cover 2P setup at the end.

This means you’ll set out 7 Gates in front of you: 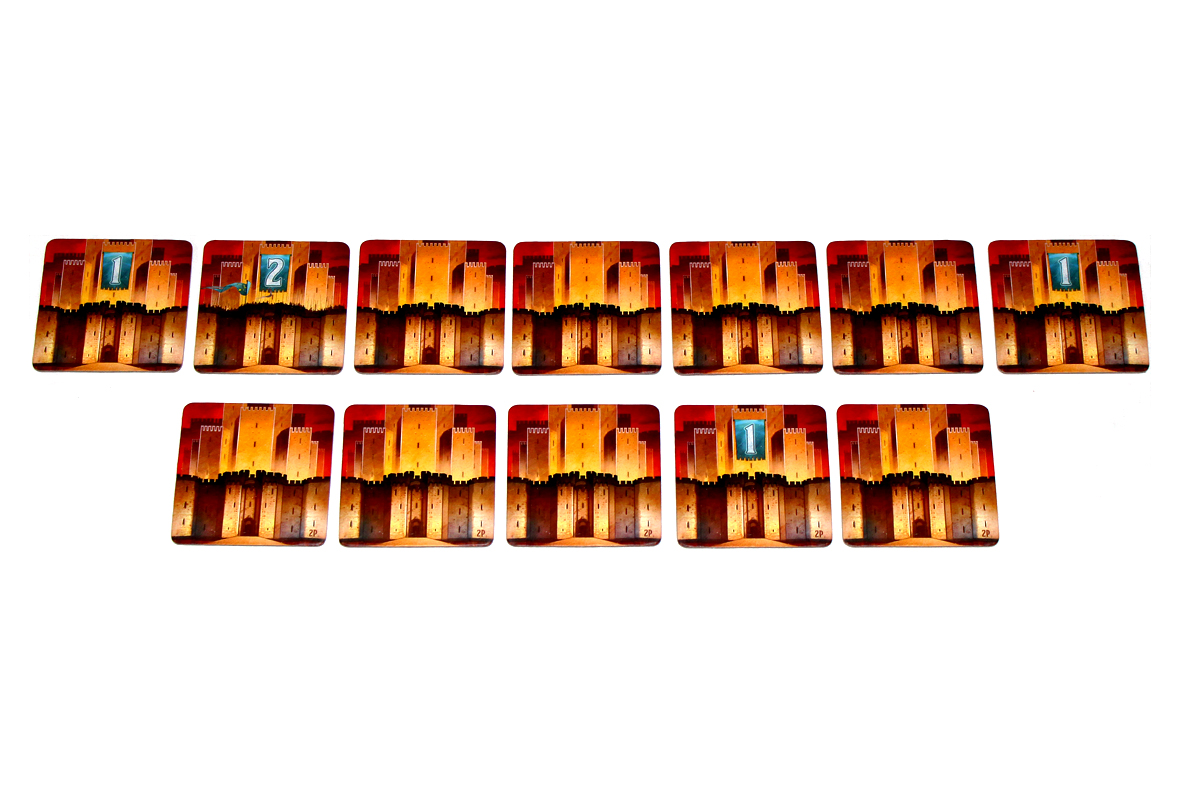 You’ll also make an Invader Deck. That’s a Boss card on the bottom:

Elites (red backs) on top of it:

Another boss card, and then the standard enemies (blue backs): 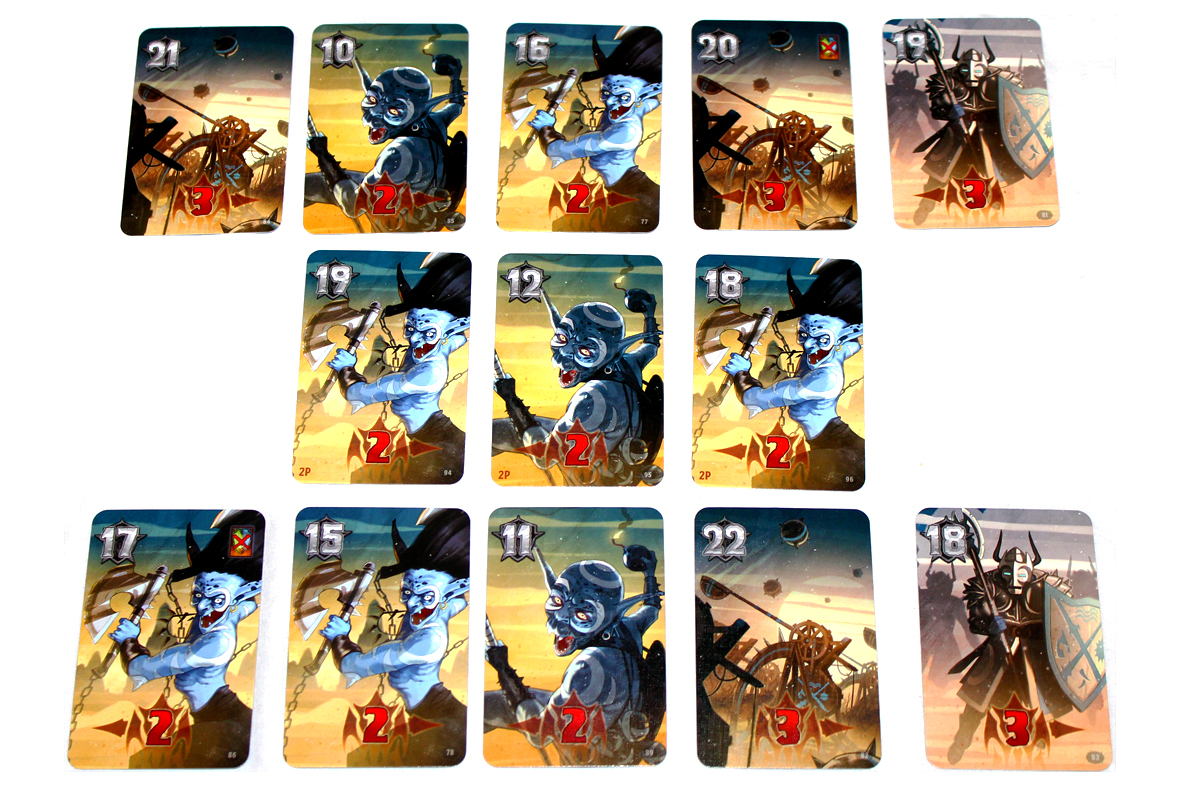 Now, you’ll want to choose between the Elves or the Humans:

Each will come with two sets of Starting Spells and a Starting Character for each one, which you can see in the center of the photo.

And a player aid, so, use that. Shuffle the rest of the cards for your chosen set and draw four.

Set out the Morale Board and set your Morale at 20 (you might just want to go for 25 if you’re playing solo):

Either way, you should be all good to start!

For two players, you’ll use all the cards with 2P (remove the 1P boss cards) and set up as normally, but you’ll put six gates in front of each player, opposite each other. Then you’re ready to start! 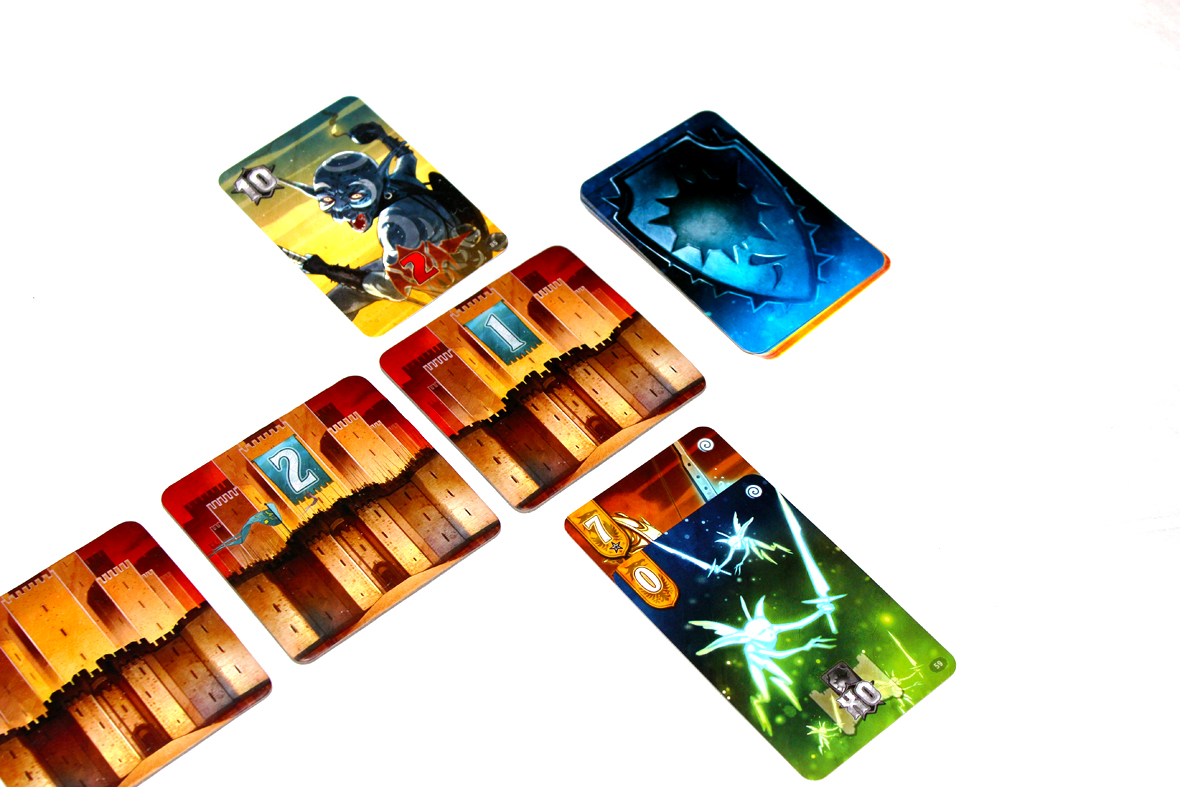 Alright, so, the game here is that Invaders are going to come knocking on your door and you’ve gotta put a stop to them the only way you know how: fightin’. If you can do that, you’ll defend the city. If not, well, it won’t matter too much, because you’ll be dead. So there’s that.

The game is played over multiple rounds, ending if you defeat every Invader or if the City’s Morale falls below 1. Here’s how it progresses:

During this phase, draw new Invaders. In a solo game, draw three and assign them to the leftmost open Gate or rightmost open Gate, depending on the arrow on their card. In a two-player game, alternate assigning three to one player and two to the other. If all gates are full, do not draw any more cards. There’s a certain enemy called an Infiltrator — it has an X symbol on it. When it’s drawn, you must discard a unit from your hand. If it’s a Boss and you’re playing two-players, both players must discard a card.

In a two-player game, a Boss will occupy both players’ gates.

During this phase, deploy any number of defenders to gates around the city. Some defenders have effects when they’re deployed, others have ongoing effects, and some have no effects at all! They all have Combat Values, so you’ll want to make sure that you’re matching them up against Invaders they can defeat. You can also use your two Spell Cards, but only once per game, unless otherwise stated. They just get flipped over on use. Bosses are not affected by Defender abilities or spells, by the way. Also, the 2P bosses have two combat values on them. The first boss takes the lower value, the second one takes the higher value.

In a two-player game, you may also give your co-player a card from your hand at any point during this phase, but only one. You can use Spells on either player’s Gate, but you can only deploy defenders to your gate.

Now the Invaders attack! At each Gate with an Invader, match their Combat Value against the sum of your defenders’ Combat Values (and the Gate Defense Bonus, pictured on the gate itself). Here’s how it breaks down:

Regardless of the outcome, for every Gate where a battle occurred, discard one of the defenders at that gate. If there are no defenders there, well, you can’t discard any, so don’t.

If you’re fighting a boss, you team up with your co-player and must achieve a total combat value that’s stronger than the boss. This means that undefeated Bosses will also pillage twice, so be careful.

Draw 5 cards. If you can’t, well, you don’t get to draw any more. Good luck! Start the next round.

If the Invaders are all defeated, you win! If the City drops below 1 Morale, you lose! That’s about all.

So there’s some structural differences to the game played at two (and if you don’t like those you can just team up to play the solo game), but also, my general finding is that a two-player game is significantly easier than the solo game. At least, a two-player game appears to be winnable, whereas we’ve been struggling with the 1P game. If you’re up for an intense challenge, try it solo, but I think I’ll probably stick with the two-player game, myself.

Overall, I think Fantasy Defense is pretty solid! I think what’d I’d like to see in an update / additional expansion would be some ways to moderate the difficulty of the solo mode, as it’s a bit too hard for me as it currently stands, but it’s short enough that I don’t mind too much. Plus, I’ll get it eventually. It’s got a nice presentation, solid art, and it’s a definitely fun tower defense game. I particularly like the collaborative elements of the two-player game, and I think that’s about where I’d like the difficulty level to be targeted for the solo mode. It’s not bad that it’s too hard for me, currently, but it will eventually hit a point where I feel less inclined to play because I keep getting crushed. Until then, I hear rumors of a campaign mode in the expansion, so I’m going to check that one out and report back on it next week. Until then, if you’re looking for a heck of a solo challenge or you like the idea of a nice two-player cooperative tower defense game, I’d recommend taking Fantasy Defense for a spin! It’s solid.