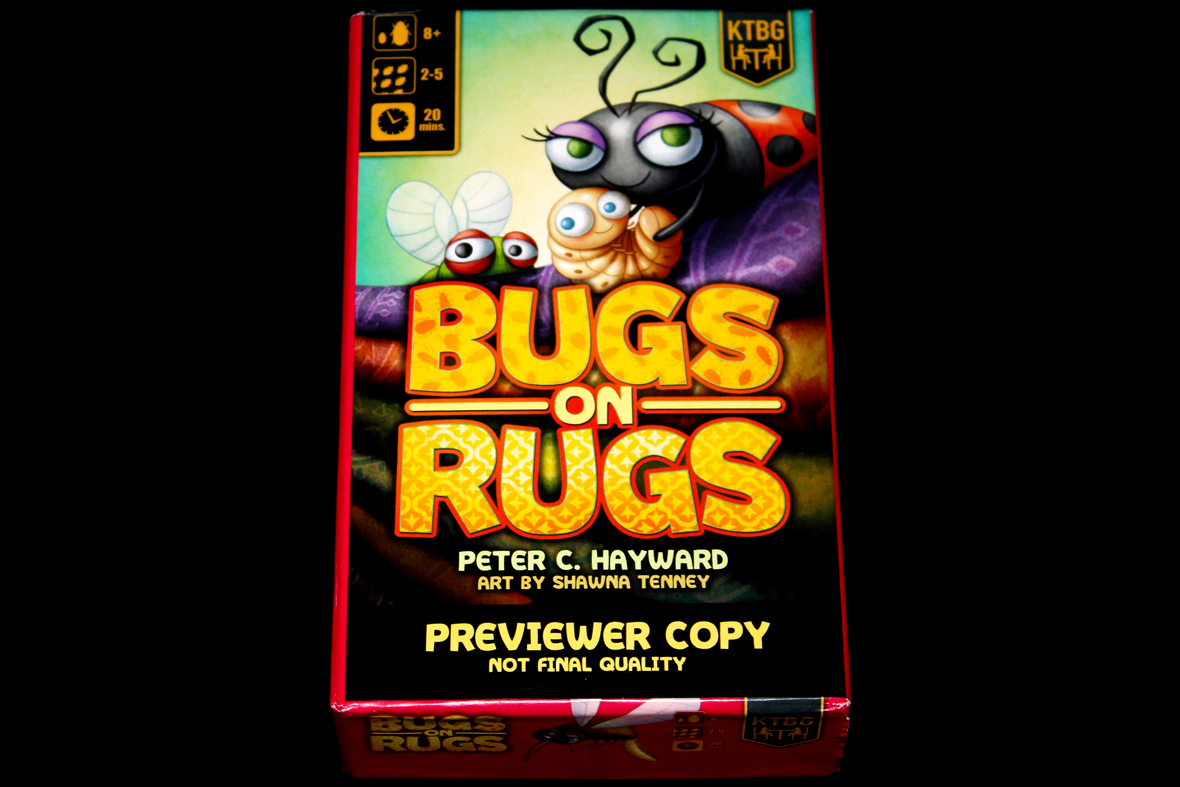 Full disclosure: A review copy of Bugs on Rugs was provided by Kids Table Board Gaming.

New year, another new game — I think I’ll eventually get to write up the Gen Con games I bought myself, but … hopefully before next Gen Con? Who knows. Either way, this week we’re looking at another KTBG release (we’ve already checked out Problem Picnic: Attack of the Ants on the site and quite liked it), Bugs on Rugs, designed by Peter Hayward (who also did a lot of work on The Lady and the Tiger series, another thing we’ve enjoyed at the site).

In Bugs on Rugs, you’re, well, looking at bugs and looking at rugs. Some bugs like bugs, some bugs like rugs, some rugs like bugs, but absolutely no rugs like rugs. We’re not sure why that is; our best scientists are lost for cause. The bugs start on the floor but you’ll be picking them up and adding them to your collection. Be careful! One escapes each round and something weird happens once it hits the wall. Will you be able to collect the most bugs?

Pretty much none, setup-wise. Set aside a scoresheet, and give the first player token to one player:

Now, you just need to shuffle the cards:

Break them into equal stacks, placing the End card on top of the right stack:

Once you’ve done that, you’re basically ready! Give each player a card to form their starting hand, flip one card over next to the deck to form the wall, and then flip over X cards into the center, face-up, where X is twice the number of players, plus one. Assign a start player and you’re ready to go!

A game of Bugs on Rugs is played over several rounds until the End Card is revealed. Basically, it’s a light drafting game where all the cards are face-up, so you can see what people are taking into their (private) hands. This means you’re gonna want to keep track of what they’re picking up.

On your turn, take a card from the center and add it to your hand, simple as that. The only card with abilities is the Larva, which just allows you to discard two from your hand and take any one bug from the Wall.

Once there’s only one bug left, it’s placed on the wall, and its wall ability activates. They have various abilities like forcing players to pass a card to the right or left  (or discard to the center) or letting players gain new bugs from the Wall or the deck. There’s a good variety.

After the last round, score the cards in your hand:

The major difference is how many of each card you use, as you might guess. At a lower player count it’s kind of easy to remember which cards your opponent has taken, which, being real doesn’t make for a terribly exciting game, but at higher player counts it’s much harder to do that, meaning your strategy might just be to focus on getting the best possible cards that you can and, say, watching the Ants or Ladybugs to make sure they aren’t getting too aggressively taken by one player. I’d say personally, I prefer it at higher player counts but it’s a cute family-weight game so it’s not bad playing with younger folks at low player counts. 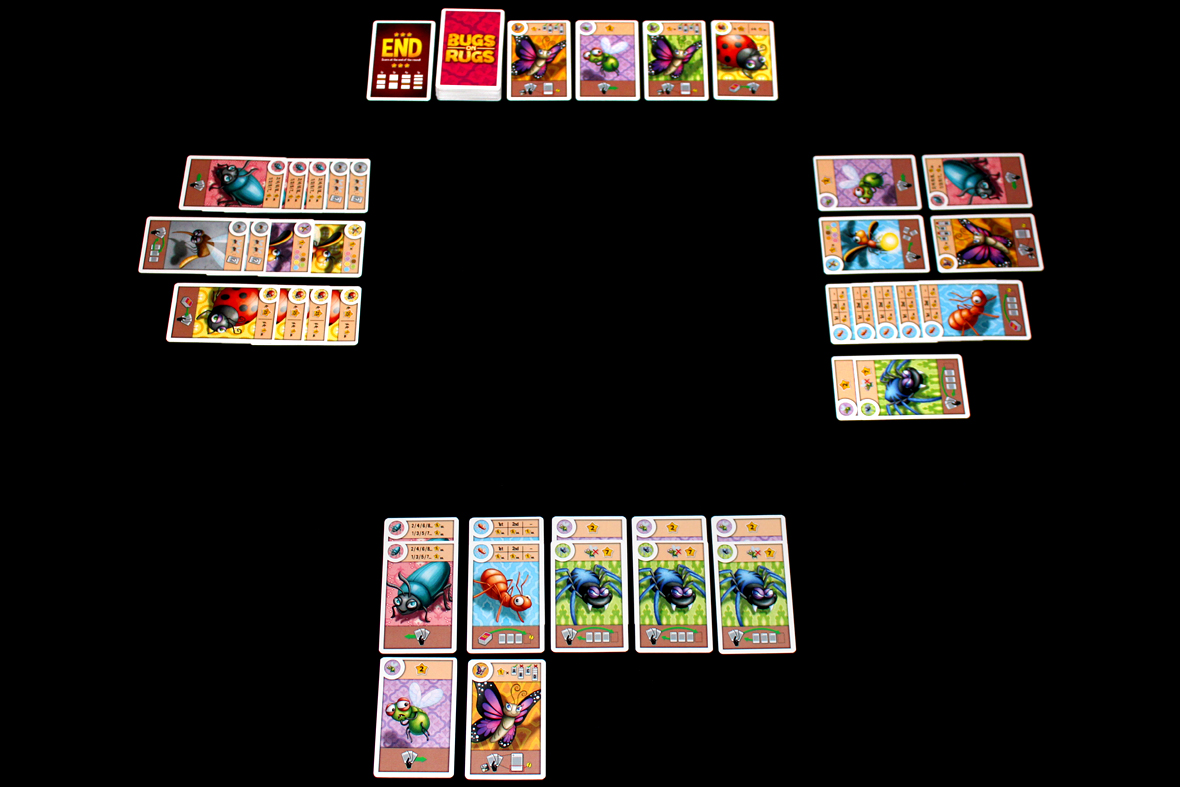 Overall, Bugs on Rugs is a solid, quick little game. Fans of drafting will appreciate a few spins on the traditional take, in that you draft face-up cards from the center, and players that want a bit more than just “take a bunch of cards and hope you took the best ones” will appreciate the powers that affect all players at the end of each round. Having players be in charge of remembering what cards their opponents have taken is a bit annoying, sure, but I’m sure it would be even more annoying if you had players attempting to count everyone’s total scores before they take a card and aggressively min-maxing during play, so I’m mostly fine with the hidden cards. I think it’s a firm enough foundation that I would be surprised if this is the last we’ve seen of Bugs on Rugs, also, as there are again, plenty of bugs. Either way, if you’re looking for a quick, light drafting game or you love gateway drafting games a lot, I enjoyed Bugs on Rugs, and you likely will, too!