I really like reviewing the game and an expansion back-to-back; it creates a satisfying continuity. I had been meaning to get to these for a while, but only really found the time over the holidays to sit down and process how I felt about them, so I’m glad I can finally publish those now. As I’ve said, expansions are always a bit tough, since you have to process the whole base game and then also get through the expansion, but this one was thankfully a bit easier since the expansion is simple enough that you can just teach it with the base game. Anyways, let’s take a look at Hatchlings, the first Dino Dude Ranch expansion!

In Hatchlings, well, once thing led to another and suddenly you have all these dinosaur eggs. You don’t know where they came from (or, if you do, you refuse to tell me, which is rude), but you’ve got a bunch of them and you need to deal with them. Thankfully, your dino parents will take care of their own; you just … don’t really know how to tell dinosaur eggs apart until they hatch, so you need to maybe figure out which is which? That’s fine, though. Not a huge deal. Don’t let that distract you, though — you still have a whole dude ranch to run! And you best do your best, lest you get stuck with a bunch of unhatched eggs. Will you manage to figure out a strategy to run an egg-cellent dude ranch?

Setup is also mostly the same as the base game. You’ll want to shuffle the Dinosaur Eggs:

Put them in a face-down stack on the nest:

Add the Oviraptor (and the Raptors!) to the bag with the rest of the dinos: 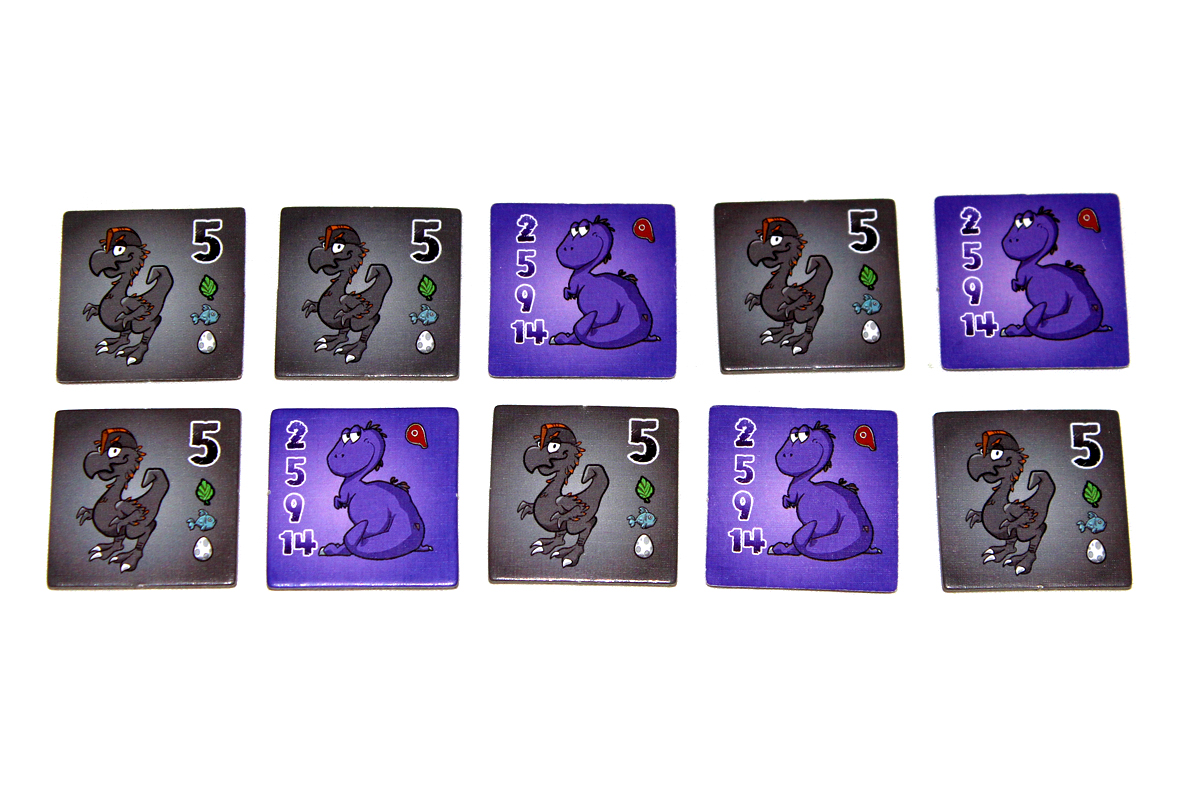 There are also some new Hired Hands cards; add them to the rest of the stack:

It’s unfortunate that you can tell the difference between them and the new ones, but … that’s manufacturing!

Beyond that, you’re doing the same stuff. You may see some new Bonus Cards, too! 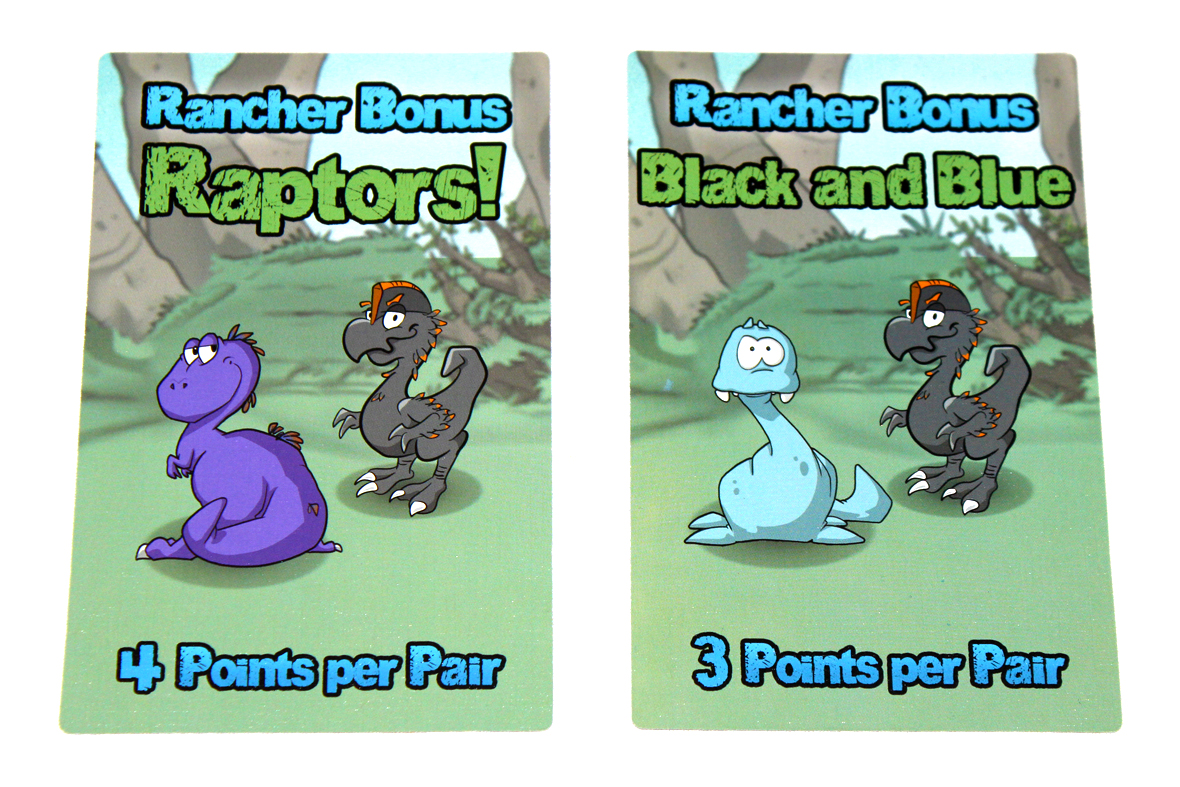 You’re all ready to go! 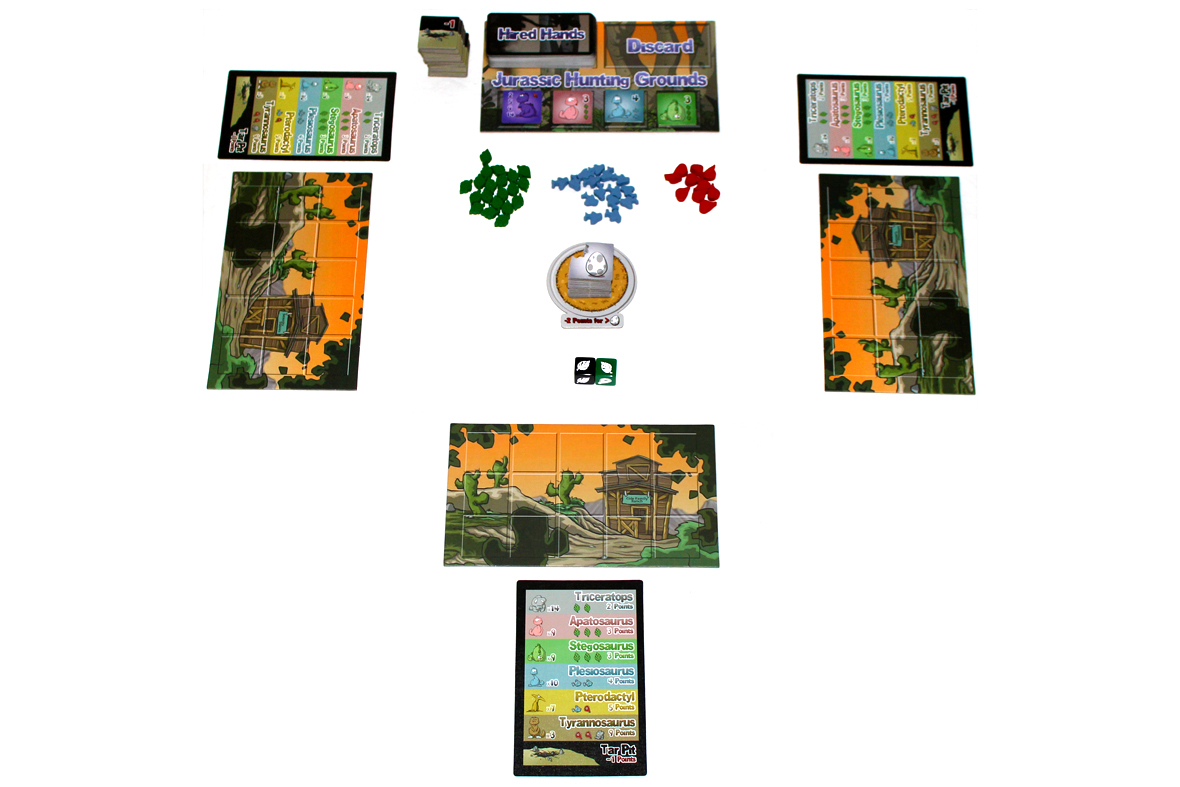 Hatchlings is played identically to Dino Dude Ranch, but with a few new additions: 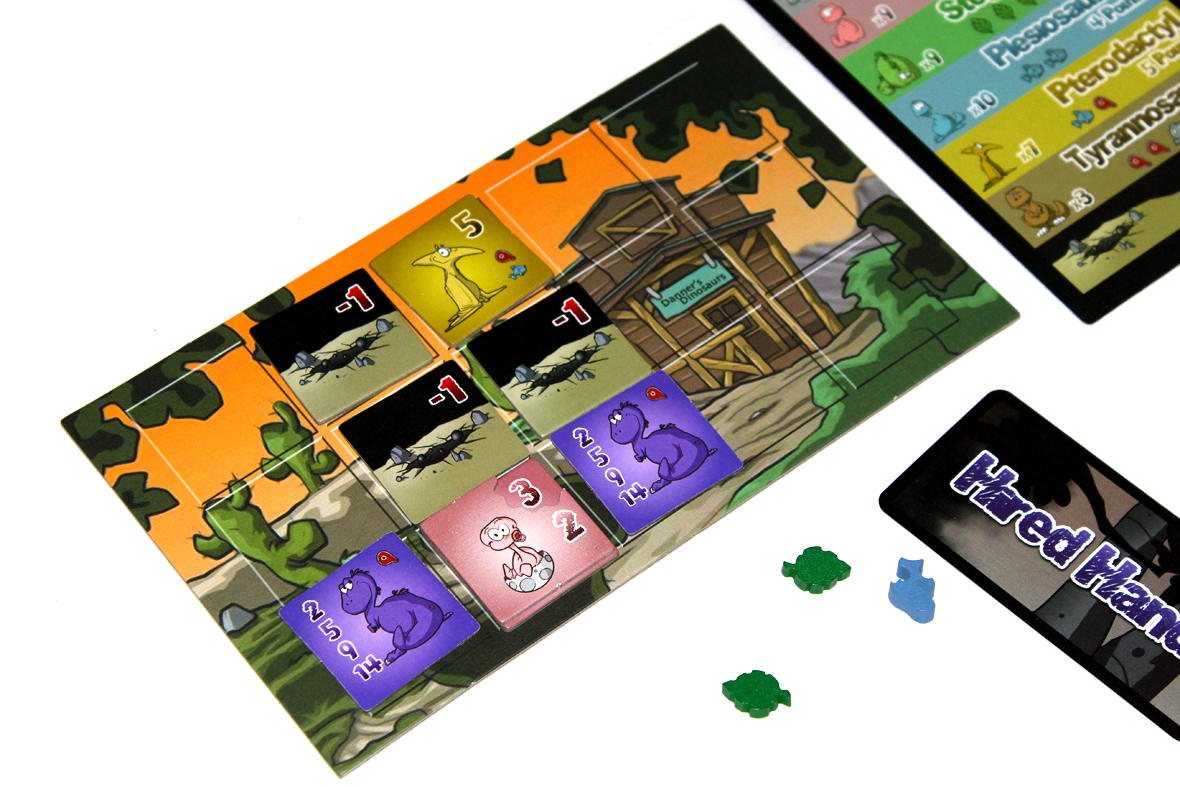 I’m not entirely convinced that this changes the game enough from the base game that it introduces new differences at various player counts. The major changes are new Hired Hands cards, which, sure, are likely going to be split between the various players, and the eggs. With the eggs, at higher player counts they’re likely to cycle a bit more rapidly, being a finite resource, but I doubt any player is going to buy all of them. The one major thing is that the raptors may become less useful, since it’s increasingly unlikely that you’ll get all of them as the player count increases. Yeah, that said, I don’t think I have a huge preference for any player count. 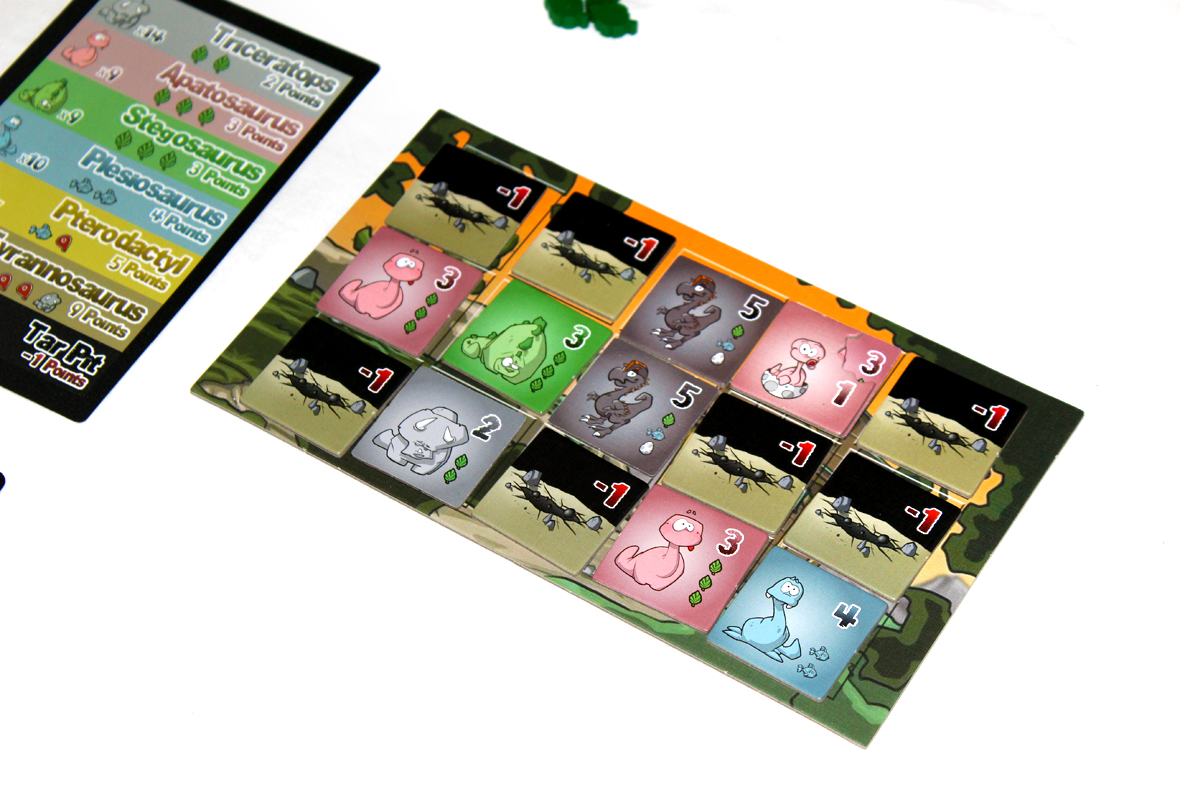 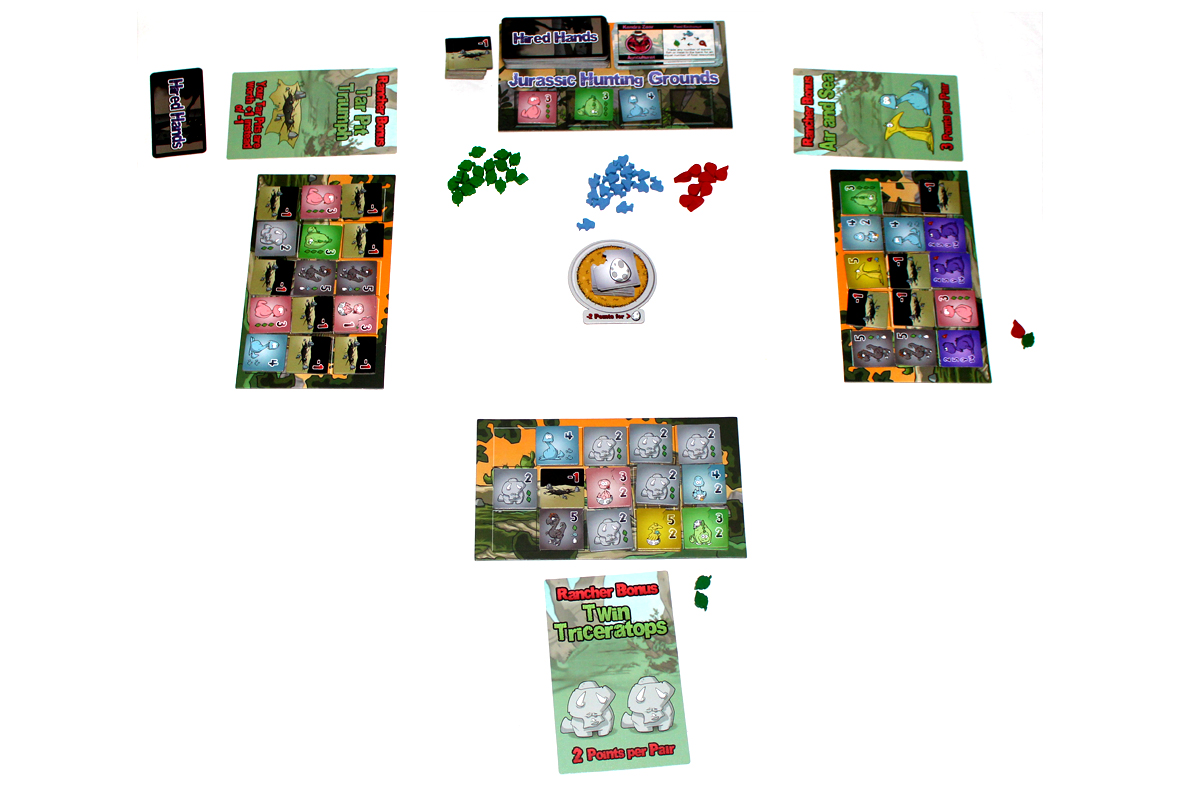 Overall, Hatchlings is a very good expansion for the original Dino Dude Ranch! It doesn’t really distract from the core gameplay (but enhances it, as a good expansion will do) and provides new avenues to success for players. Naturally, the core game is relatively unchanged, so if you hate tar pits or dice rolling, this isn’t going to be the fix for that (and this might be too light of a game for anything “fixing” that to be on the roadmap; just try Dinosaur Island). Pleasantly, the baby dinosaurs are a cute addition to the game; I just wish that the punchable tokens were a little more robust. And while it’s nice that more Hired Hands cards come with the game, I think something must have happened in the print run that I have since they’re pretty significantly different from the original game’s cards, which makes it kind of obvious when you’re about to draw one. That’s a bummer. Beyond that, I think that I’d probably always throw the expansion in when I’m playing Dino Dude Ranch, and would probably even teach the game with it, given that it doesn’t require too much additional work to understand. If you’ve really enjoyed Dino Dude Ranch and are looking to take it to the next level, the Hatchlings expansion is definitely worth checking out!