I’m hoping I can get this and JIDOHANBAIKI out at the same time so that I can just have Vending Machine Week here at What’s Eric Playing?. I’ll let you know how it goes. Either way, this is another game from Soso Studio, based out of Taiwan, which is exciting. We’re seeing a lot more games from outside the US cross our desk here and I think that’s genuinely good for the hobby to get a more global perspective.

In Strange Vending Machine, two beckon you to play their games. The first is Muscle Man, who wants you to buy certain foods and become buff; the other is the Mysterious Wizard, who wishes to train you in the recipes required for the Mystic Arts (nerd stuff, basically). Both feature these strange vending machines that only sell you one item at a time. Will you be able to get what you want out of these weird devices? Or will you end up going completely broke?

The setup changes a bit between games, but it’s mostly the cards that you use. You’ll want to set out the vending machines:

If you’re playing Muscle Man’s Purchase Challenge, give each player one at random. If you’re playing Ingredients and Recipes of the Mysterious Wizard, instead set all six on top of the box lid. Now, set out the money: 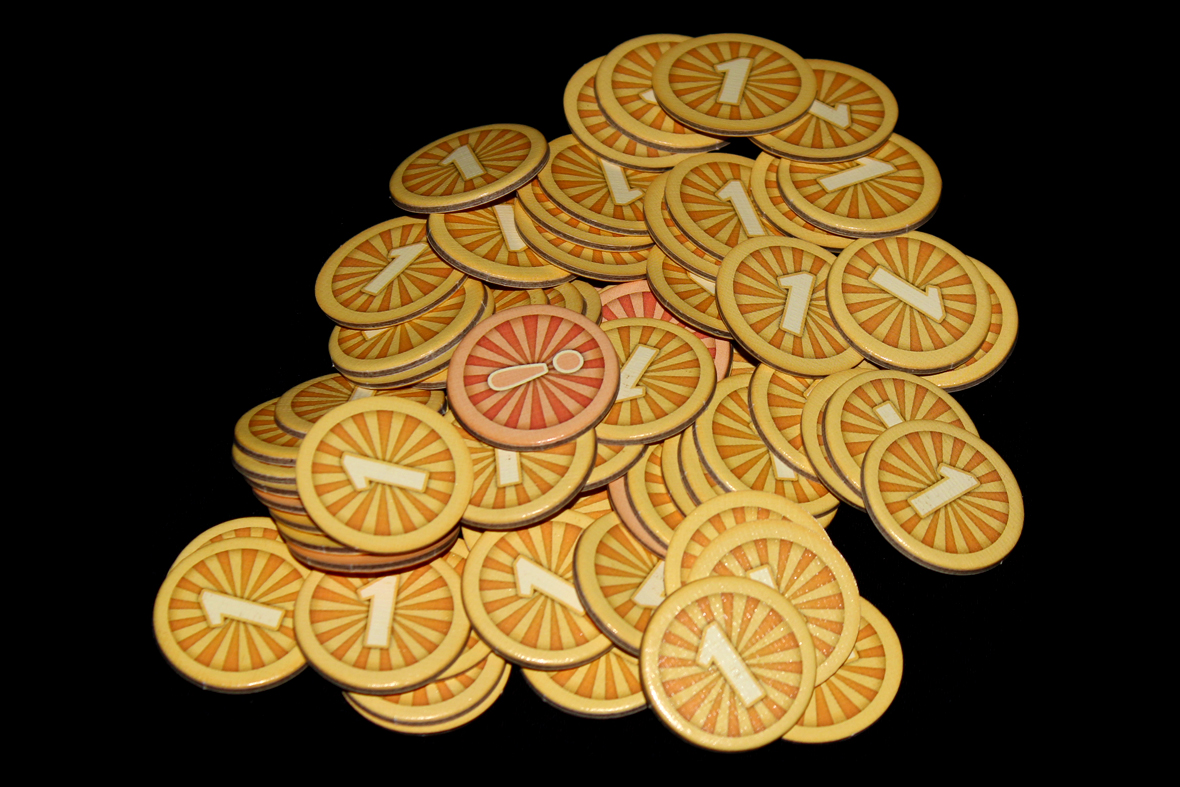 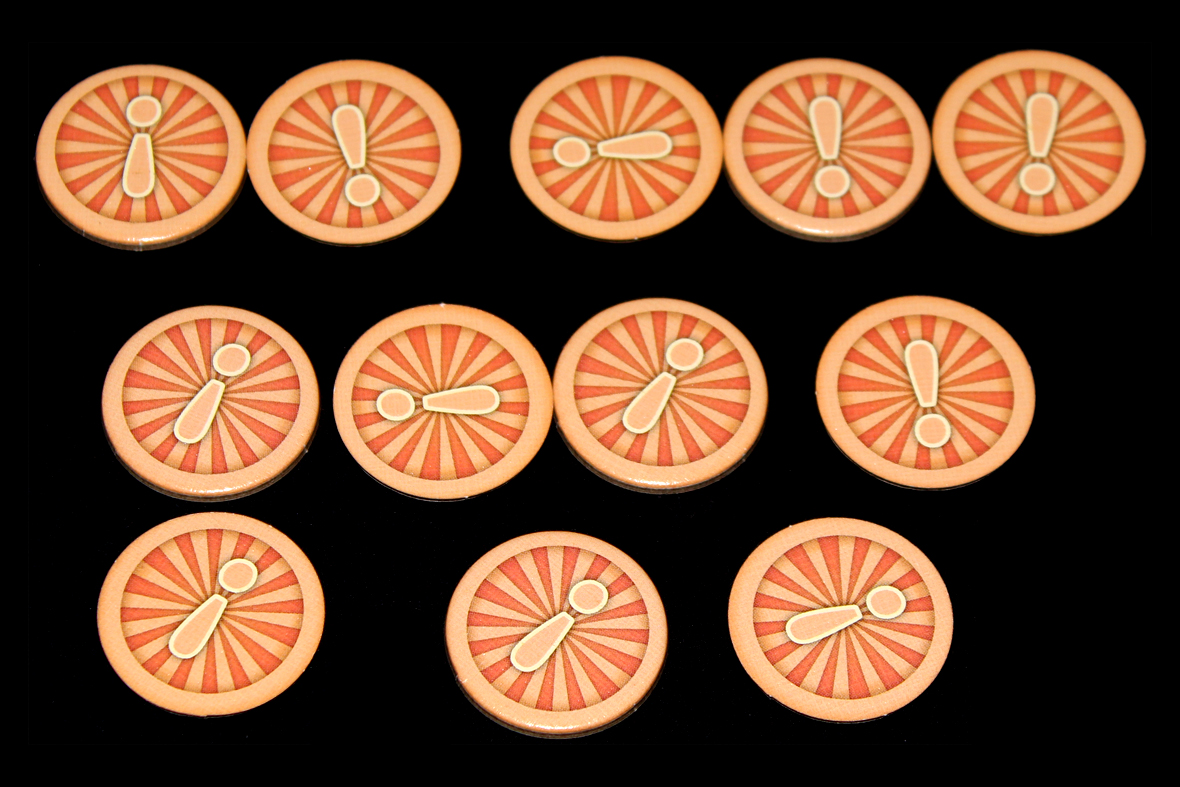 Give each player 8 real coins in that case (or a mix of real and fake, if you want; it doesn’t matter). For Ingredients and Recipes of the Mysterious Wizard, you’ll want to mix the fake coins in with real coins, depending on your player count, and then put two coins at random into every vending machine:

Now, load up the vending machines with their cards. For Muscle Man’s Purchase Challenge: 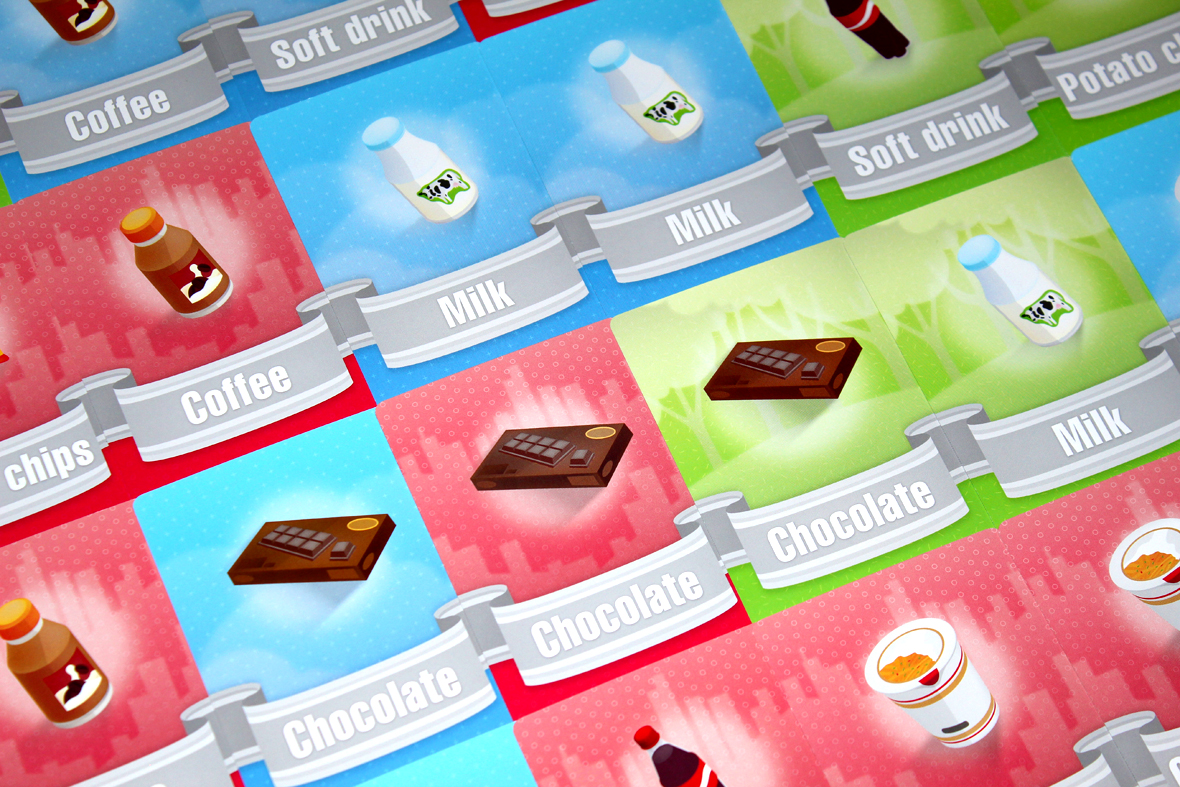 You should be ready to go! 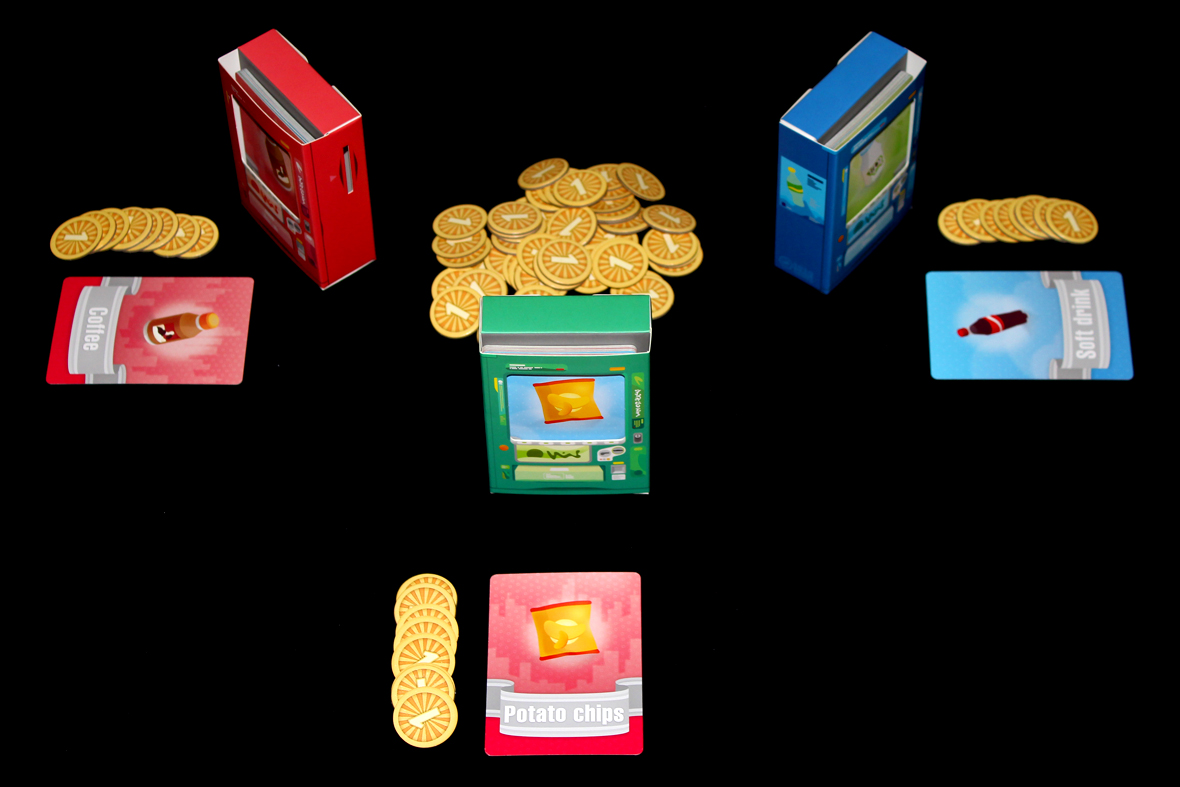 For Ingredients and Recipes of the Mysterious Wizard:

And you’re ready to play Ingredients and Recipes of the Mysterious Wizard!

In this game, you’re trying to impress Muscle Man with your ability to make wise purchases from your local vending machine. Maybe that’s like, his thing. I’m not sure and I don’t have the space here to muse on the motivations of the mysterious Muscle Man. Another time.

The game takes place over a series of rounds, in which each player acts simultaneously. As your action, you may:

Each player should simultaneously perform one of those actions and then pass the machine to the player on their right. 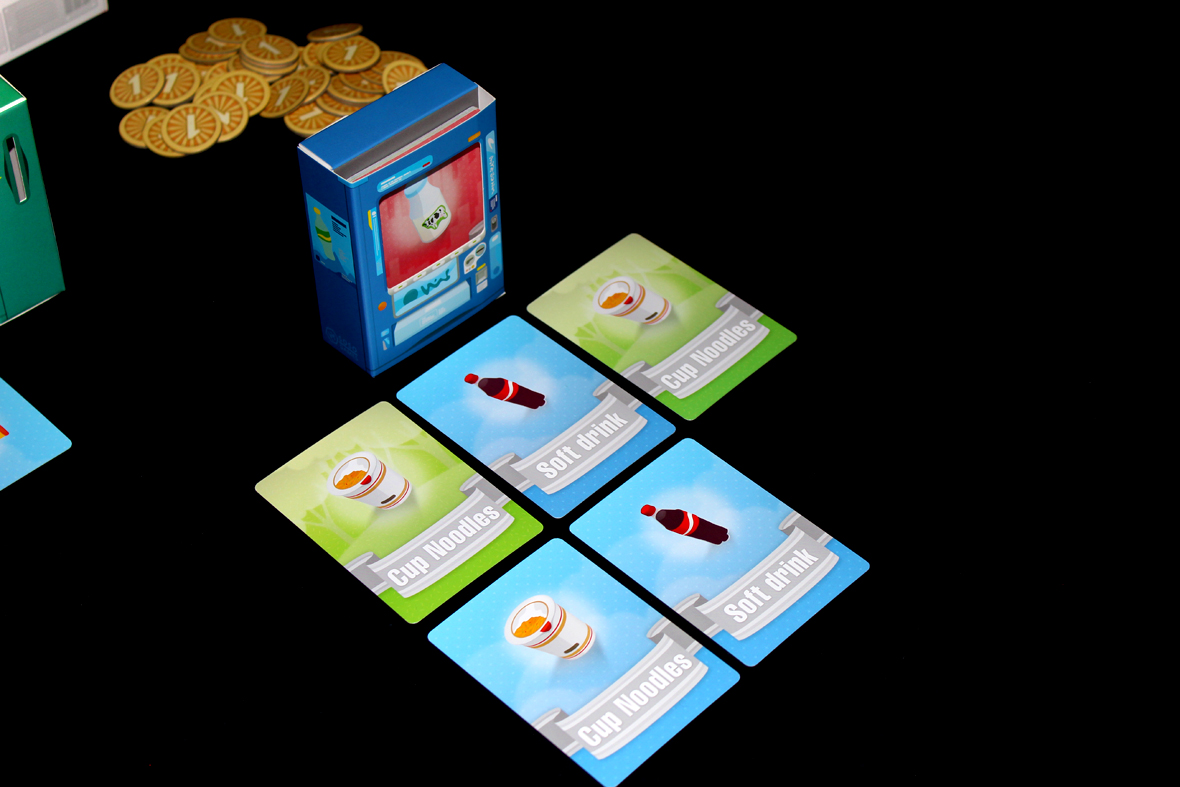 After any one player has added a fifth card to their tableau or once a vending machine is out of food, the game ends. Score as follows:

Ingredients and Recipes of the Mysterious Wizard

This one plays similarly to Muscle Man’s Purchase Challenge (sort, of), but you’re no longer playing simultaneously. Ironically, that makes the game a bit easier. On your turn, you may do one of two things, but DO NOT TOUCH THE MACHINES. If you touch them, you’re committing. Spin the box lid instead to look at the machines.

After you take an action, put the vending machine back and play continues with the player on your left.

Once a player has taken a fifth card, all other players take one more action, then the Final Coin Shake occurs, and the game ends!

Once you’ve done that, score your various cards. Note that, if you have no pink cards, you do not gain points for money. You only gain them from pink cards. You do, however, lose 1 point for every piece of fake money you have! Isn’t that delightful? The player with the most points wins!

Not really all that many in Muscle Man, beyond more players competing for a finite number of cards, which more often than not means that you might end up going after the same thing as another player, which is a pretty effective blocker if you’re not careful. It’s good to keep one from them, but make sure you are still getting what you need (at high player counts, blocking one player does very little to help you win). You could hilariously conspire against one player by having all other players take from their vending machine at the same time, effectively guaranteeing that they will have  very few good options headed their way (though progressively better, as players will likely add money to their vending machines over time). For Mysterious Wizard, you’ll start with fewer coins (so you’ll see more of that amazing vending machine action) and you’ll have a bit of an easier time collectively making sure that any one player doesn’t get all the cards that stack well together. I don’t really have a strong preference on player count, on this one.

Overall, I think Strange Vending Machine is a solid game. The main complaint I have with it is that it takes some time to really get, which is good and bad, in a way. Like Fantastiqa Rival Realms (which I mentioned earlier), it gets better as you play it more and get more familiar with it, but I worry that with a lot of board games people aren’t necessarily willing to give a game that doesn’t blow them away another chance (I mean, I only almost played Tower of Madness before putting it away in a huff because we had a bad magnet and setup is a pain). With multiple games in a box, it takes time to understand each game, especially given that they play so differently and the strategies are definitely not the same. It also … takes a while to review, but here we are. That said, I enjoyed both games as i played each one (Ingredients and Recipes of the Mysterious Wizard being my favorite, but Muscle Man’s Purchase Challenge is going to be a similar weight to, say, Bugs on Rugs, in my opinion), so if you’re looking for a silly collection of vending machine games, Strange Vending Machine isn’t a bad choice!