Full disclosure: A review copy of Spring Rally was provided by Mandoo Games.

Keeping up a now-ongoing trend of reviewing games from outside-the-US publishers, we’ve got Spring Rally on the docket from Mandoo Games. They published Papering Duel, which I reviewed recently (or will review soon; it’s impossible to tell when I write these when I plan on publishing them), along with Fantasy Defense, which I also enjoyed (even if I’m terrible at it). Let’s see what they’ve got for us this time.

In Spring Rally, you’ve ditched your supercars and your sprawling race tracks for something a bit more … compact. Wind-up cars are all the rage, now, and you’re going to become the best wind-up car racer in the game! Compete against your fellow wind-up car enthusiasts, but make sure you don’t get too distracted, because if you overwind you’re going to waste all that energy! Will you be able to beat your opponents across the tiny finish line?

Not much to be done, here. Set out the board:

Choose a side to play on, and set the player cars on that side:

Give players their corresponding dials, with the outer ring placed over the center dial part. The dials (at least in my version) are a bit too large, so it may be worth putting the center dial on top and not pressing it in, all the way:

Choose an appropriate number of cards for your player count:

Then, shuffle the cards: 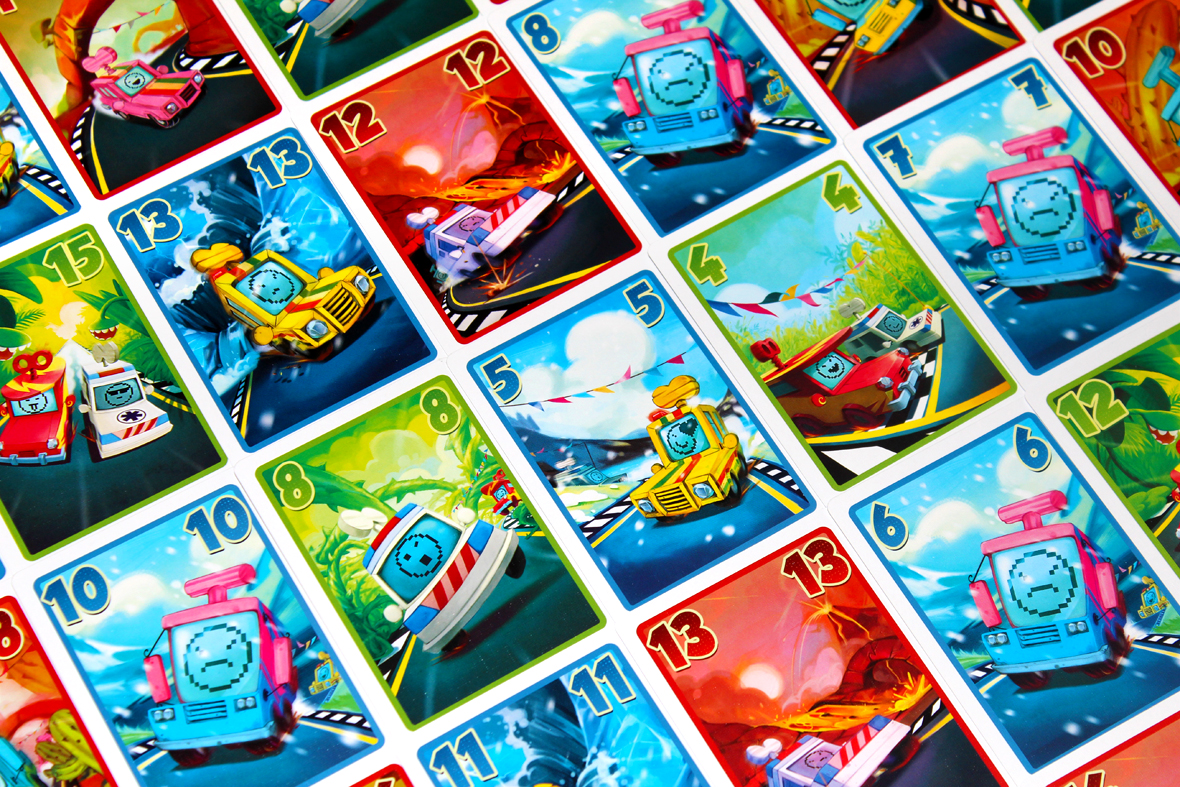 Set them aside, for now. Choose a player to start, and give them the start player token! 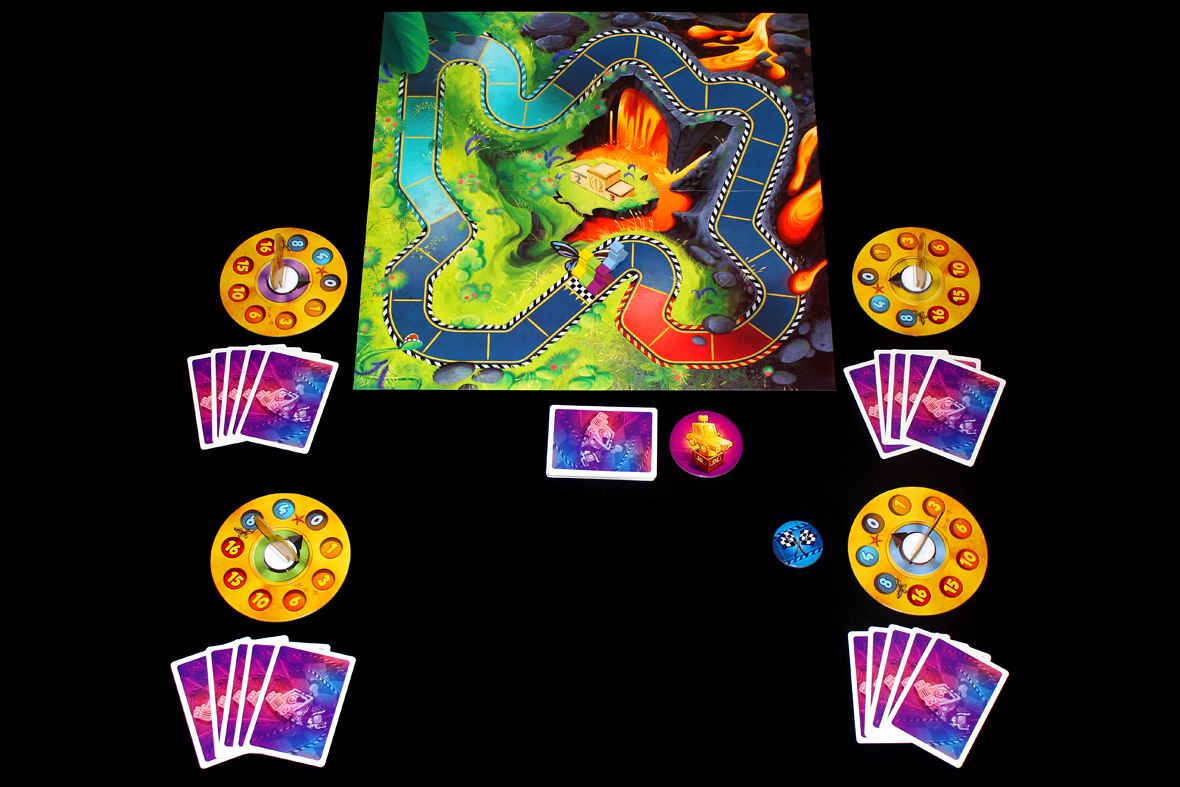 So, this is exciting; it’s a trick-taking racing game! Your wind-up cars move around the board depending on whether or not you win tricks. Wind too much, though, and you’re going to overwind your spring, which isn’t good! First player to complete two laps wins the game!

To explain trick-taking, it’s easiest to just detail a round. Every round, players get progressively more cards:

Don’t worry; someone will win by the end of Round 3. The player leading starts off by playing any card they want. This card has a color and a number. All players, every play, must play a card of the same color if they have one in their hand. If not, they may play any other card. Once all players have played a card, resolve the “trick”:

This is different from other trick-taking games, but don’t worry too much about that. Either way, if you lost the trick, wind your spring one turn clockwise. If you won the trick, you may move forward a number of spaces equal to the lowest card played in the trick. Before you do, you may also choose to release your spring. If you do, also move spaces equal to the number your dial is currently pointing at. You skip spaces occupied by other players without counting them.

The player who won the trick starts the next one by playing any card; continue until all cards have been played.

At the end of a round, starting with the player in last place, players unwind their springs and move a number of spaces equal to the number their dials are currently pointing at (in turn order). Then, the player in the lead starts.

If you pass the finish line, flip your outer dial to the red side; this lets other players know you’re one lap away from winning! If you cross the finish line again, first, you win! Take the trophy and, I dunno, post a photo to social media or something. You’ve really earned it.

The major difference you’re going to notice is that there are more cards in play at higher player counts, so you have more variance in what players’ hands can look like as player counts increase. Additionally, with more cars on the road, players tend to travel farther as the result of winning a trick, so be careful with how you plan that one out. Beyond that, there’s not much else. I’ll say that I definitely enjoy it at three players, since the tricks are easy to resolve. If there are three colors in play, whoever played the last card wins; don’t even need to really check numbers (beyond finding the smallest one). I’d probably enjoy it at any player count, though.

Overall, I really like Spring Rally! Like I said, trick-taking is a favorite mechanic of mine (Skull King still taking the cake among trick-taking games; it’s super fun), but combining it with racing is definitely an idea that I’d’ve looked at and said, “I don’t … think that works”. And it does! I’m pleased to be wrong. Now, don’t get me wrong; this is not a particularly heavy game. It’s very much a light, family game that also happens to be an excellent introduction to trick-taking (and you’ll probably learn it slightly incorrectly, given that the resolution is the exact opposite of most trick-taking games, but oh well). But that’s my wheelhouse (car pun intended), so, I’m super excited that I got to take a look at it. If you’re looking for a cute game that won’t get you too wound up (and won’t take a terribly long time to play), I’d definitely recommend taking Spring Rally for a spin! A few games of it have made me really hope that they make more content for the game. New maps, event cards, special cards, a new suit; there are a lot of ways to really take this to the next level, and I hope they consider it! I’m a really big fan of the game.