Full disclosure: A review copy of Cartographers was provided by Thunderworks Games.

So I often get an opportunity to play games before they launch, but it’s rare for me to get a chance to play a game before it’s even done. (I’m a bad playtester, for reasons outside the scope of this review. That said, it’s an important thing to do, so I still go to Protospiel and other playtest events from time to time, when I can.) At BGG.CON 2018, I was pleasantly surprised by the opportunity to try Cartographers in a very beta form. I was kind of enamored with it (as I tend to be with flip-and-fill games, but what can you do), and kept bothering them to let me review it once it was ready, and, now, here we are. So let’s check it out!

In Cartographers, you are mapmakers combing the land on the Queen’s behalf to chart out the various facets of the realm. You will find lost lands, ruins, rifts, and even areas full of monsters if you look closely enough, but you need to make sure you’re charting out areas that follow her royal decrees. If you succeed, you’ll be named the greatest mapmaker in the realm!

Not much. There are double-sided sheets; give every player one. 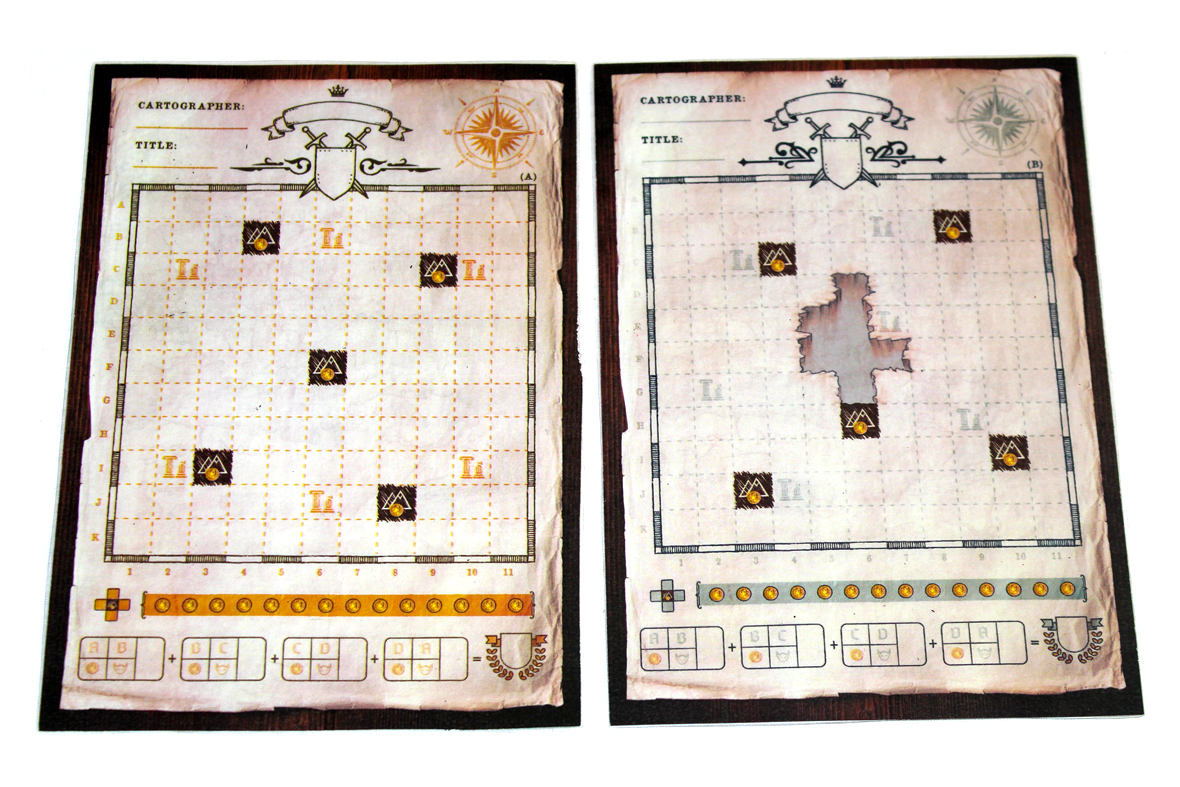 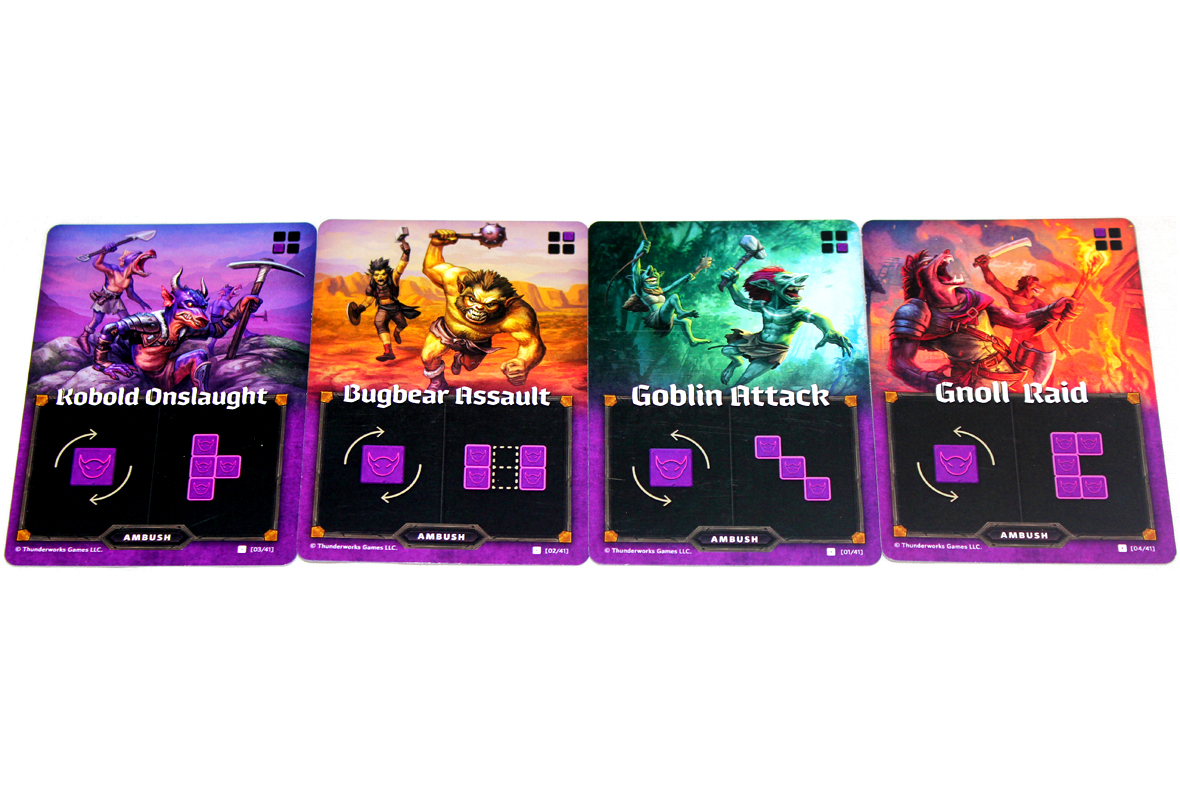 Shuffle one of them into the Explore Cards: 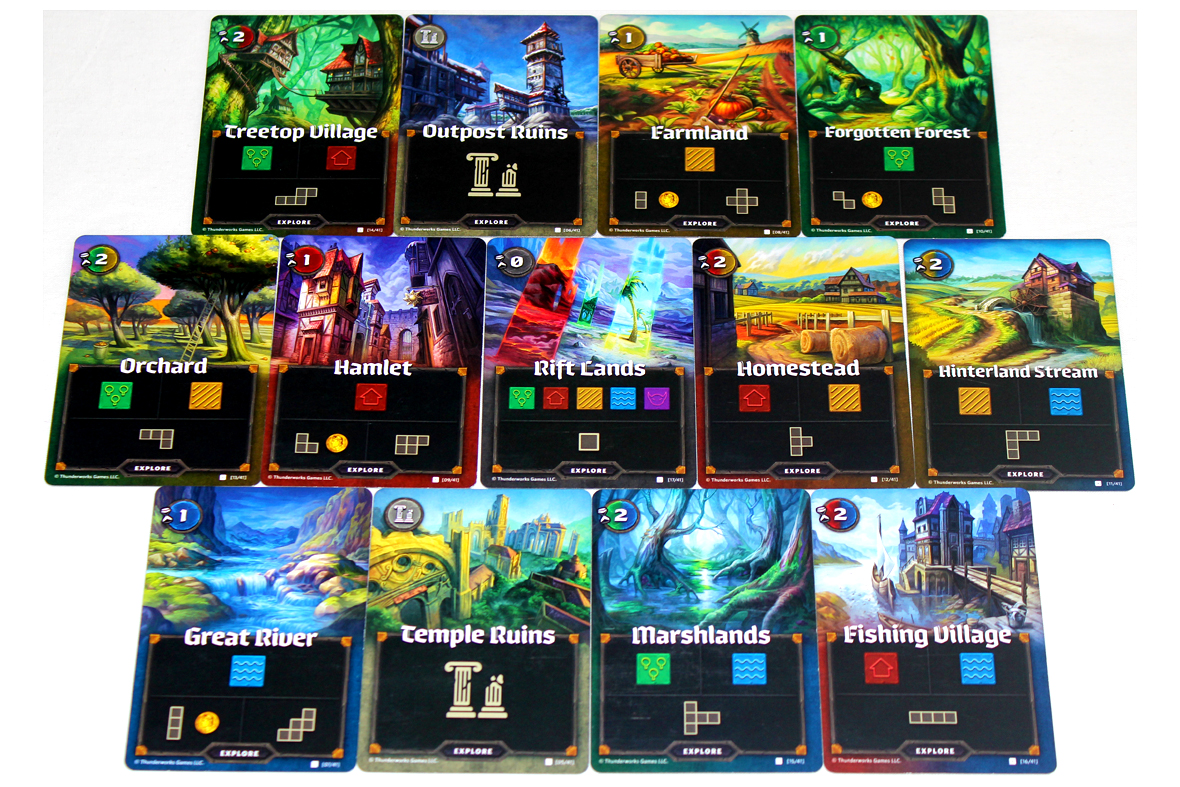 Shuffle the Scoring Cards within their own stacks: 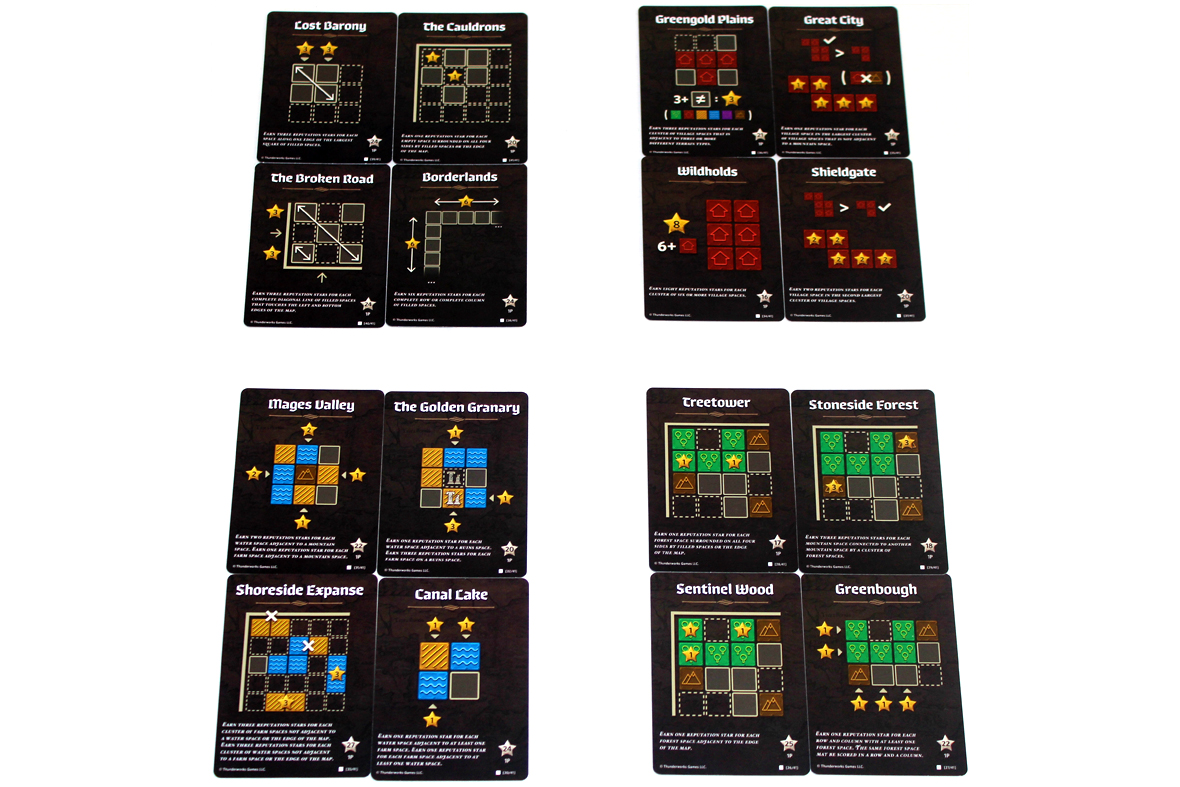 Reveal one card from each stack under the various Edicts:

If you want to use the Skills mini-expansion, shuffle the Skills, set out three:

Also set out the Season Cards: Spring, Summer, Fall, Winter, in that order.

Once you’ve done all that, you’re ready to go! There’s no start player. 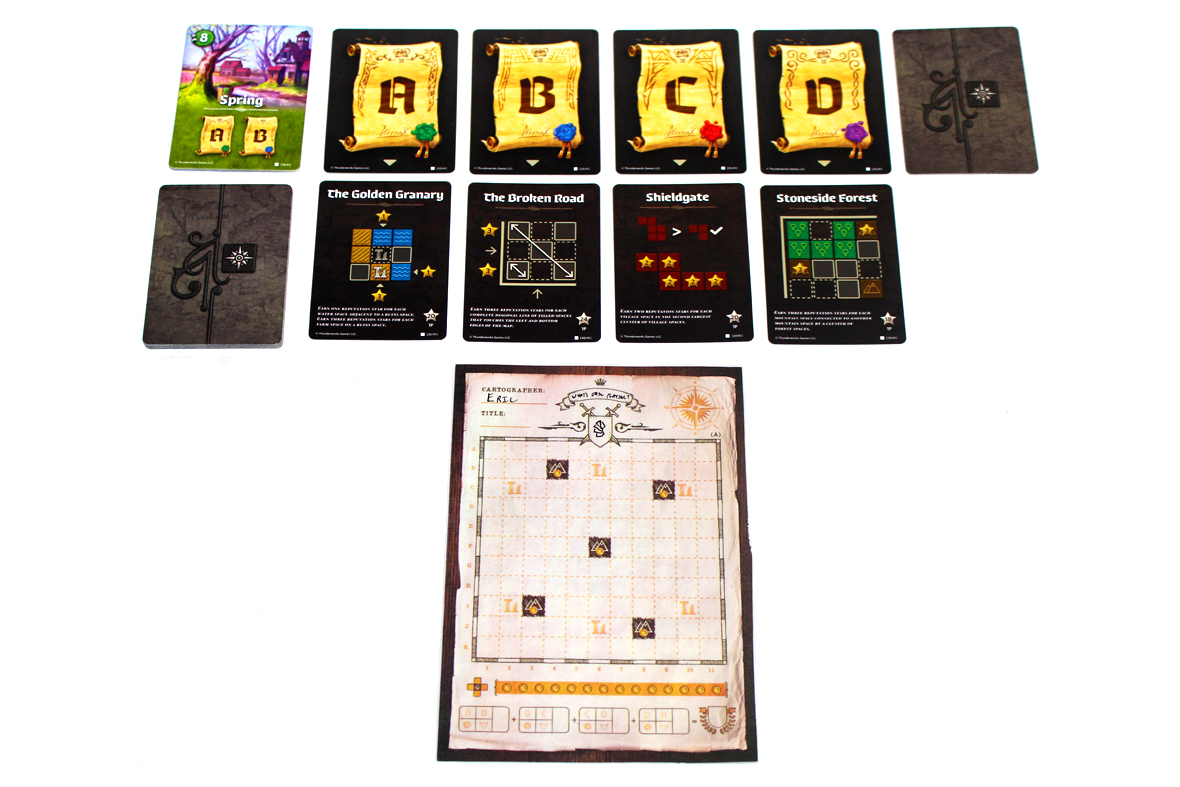 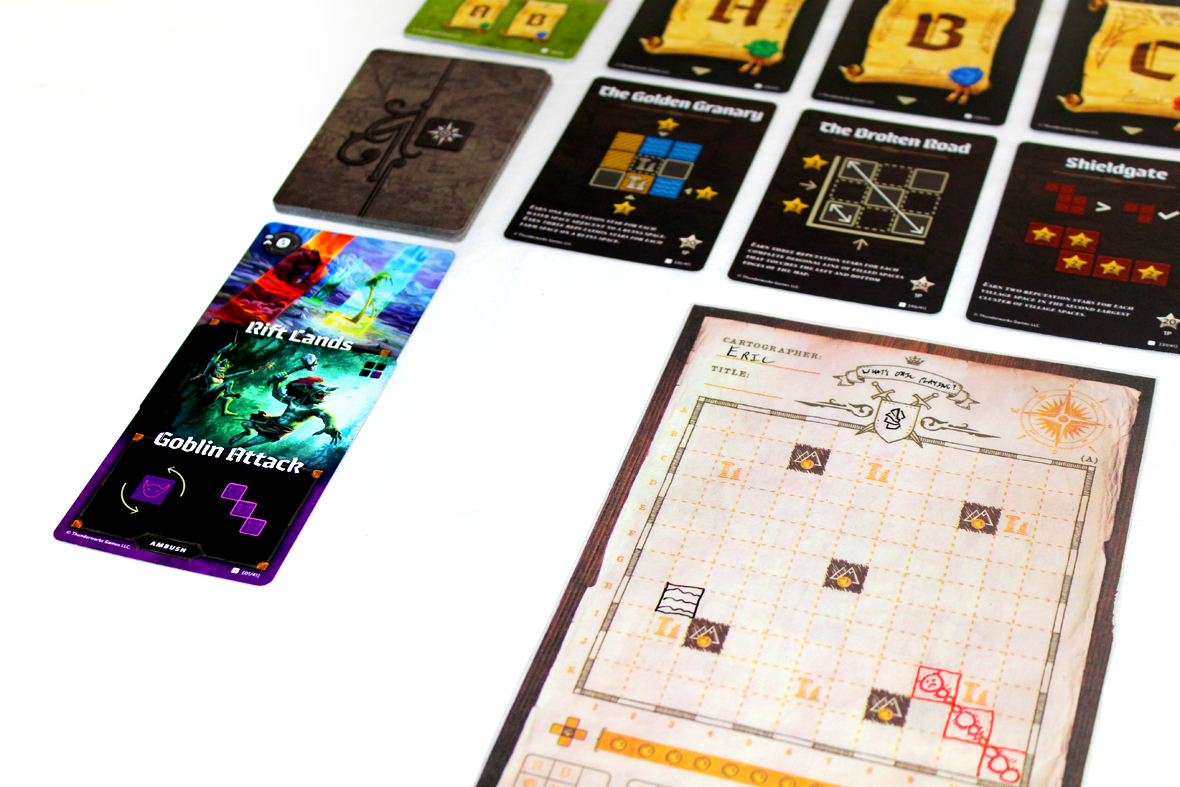 You can see that yes, I already messed this game up.

A game of Cartographers is a flip-and-fill game, a spin-off of the roll-and-write genre similar to Welcome To or MetroX or Let’s Make a Bus Route. In this one, you’ll flip cards and add the shapes and terrain types to your map in order to meet scoring conditions on the cards each season. Whoever does the best job doing that will win the game! Let’s dig into how that works.

So, on a specific turn, you’ll flip the top card of the Explore Deck. It can be one of three things:

Naturally, there are some other rules:

Each Explore Card has a number on it between 0 and 2; once the sum of those numbers exceeds the Season limit (8, 8, 7, 6, respectively), the Season Ends. Move on to the scoring phase.

When Scoring, follow the Edicts that are active for this season:

Once you’ve scored those, give yourself a point for every coin and lose a point for every open space next to a monster square. After every player has scored, move on to the next Season by shuffling a new Ambush Card into the Explore Deck with all the old Explore Cards. Note that this means that if you didn’t see an Ambush Card this round, there is now more than one in the deck.

We don’t have to talk about how badly I’m doing.

When Winter ends, the game ends, too. Total scores; the player with the most points wins!

The only major changes are these:

There aren’t really any; it doesn’t affect your game beyond “you might have different people adding monsters to your board”, which would also be irrelevant past 3+ players. There’s still good player interaction, though, if you want it, so that’s nice. I’d recommend this at any player count; it lacks the racing element that I think breaks down after 6+ people. 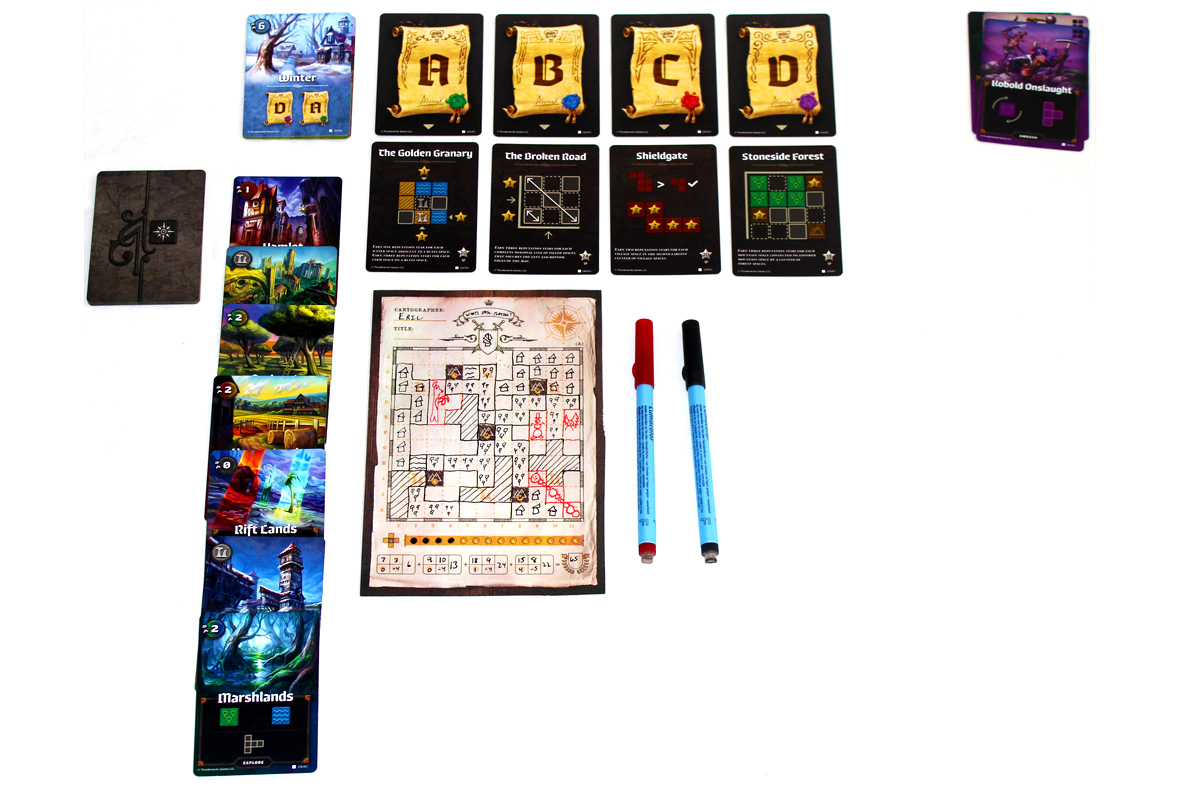 Yeah, overall I think I love Cartographers. It’s a wonderful blend of the like, spatial elements that I like in Tag City with the randomized scoring conditions that I really like from other games (Gartenbau, for instance, recently). What I think sells me on it is the subtle task of drawing the various symbols required to make the map look good. It’s a small touch (as opposed to writing F for Forest or R for River), but it makes the map feel a lot more personal and vibrant, which really sells it for me. Generally, I love it when a game finishes and you feel a sense of accomplishment, and I think everyone does in Cartographers. You may not have fulfilled the most edicts of the Queen, but you still made a rad little map and you’ve got that going for you, which is great. I think rewarding creativity (and encouraging it) is an easy way to make a good game into a great game, and Cartographers has that motivation at its core. If you’re looking for a fantastic flip-and-fill game, Cartographers is it, for sure! I’m really hoping that there’s an expansion sooner rather than later.