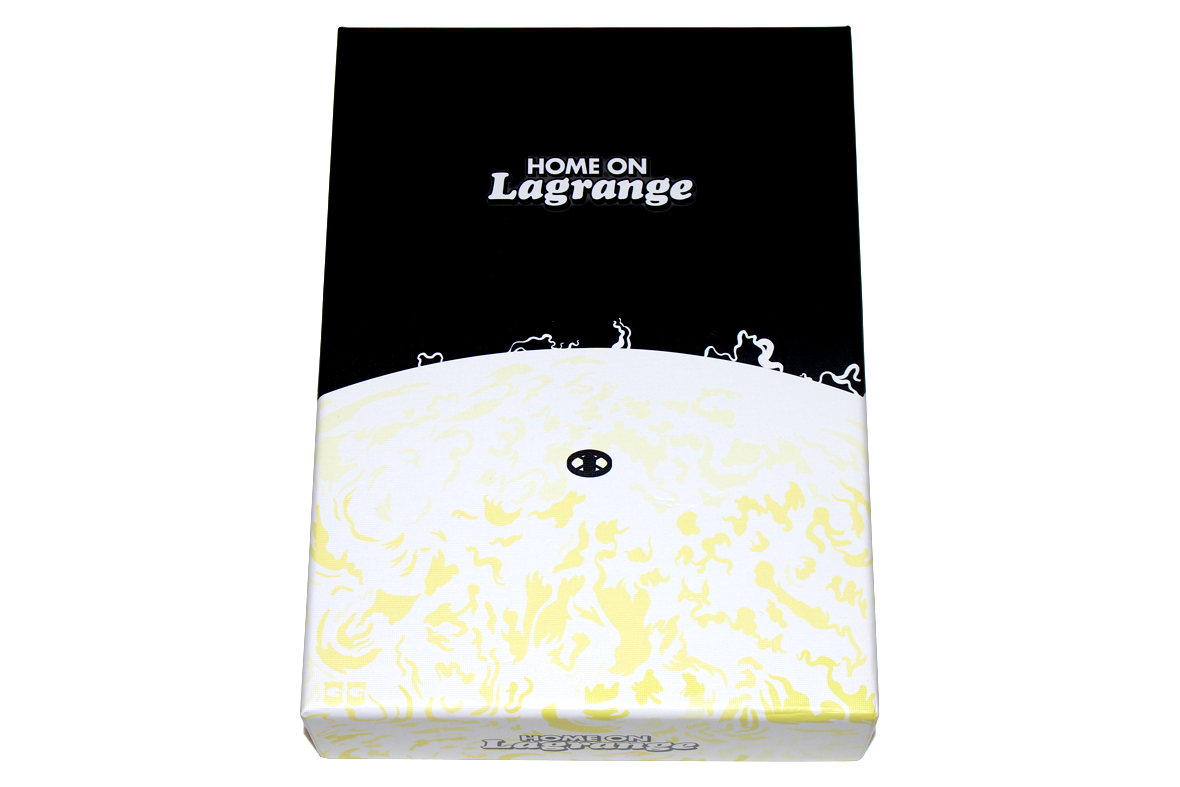 Full disclosure: A review copy of Home on Lagrange was provided by Grizzly Games.

I have a soft spot for two things, lately: space games, and good art. Naturally, since Home on Lagrange, a recent Kickstarter release from Grizzly Games, has both of them, I’m interested. It’s funny; I used to have the Kickstarter new releases page open and I would refresh it every day. Just to see what was up. Now, I don’t, and I miss it, but it’s nice to still get to check out games as they come out. Let’s dive in a bit more and see how Home on Lagrange plays.

In Home on Lagrange, we are in the far future of the 1970s and we need to get into space. We’ve targeted one of the 5 Lagrange Points relative to the Earth, moon, and sun (essentially places where we won’t slowly drift into the sun [or quickly] and die). As Admirals, our goal is to build out stations that can sustain life and figure out how to get our people there (and whatever other weird stuff ends up on our stations). If you can build the best one, you’ll win the space race! Can you triumph in your astronomical intentions?

Not much going on, which is nice. Shuffle the Module Cards: 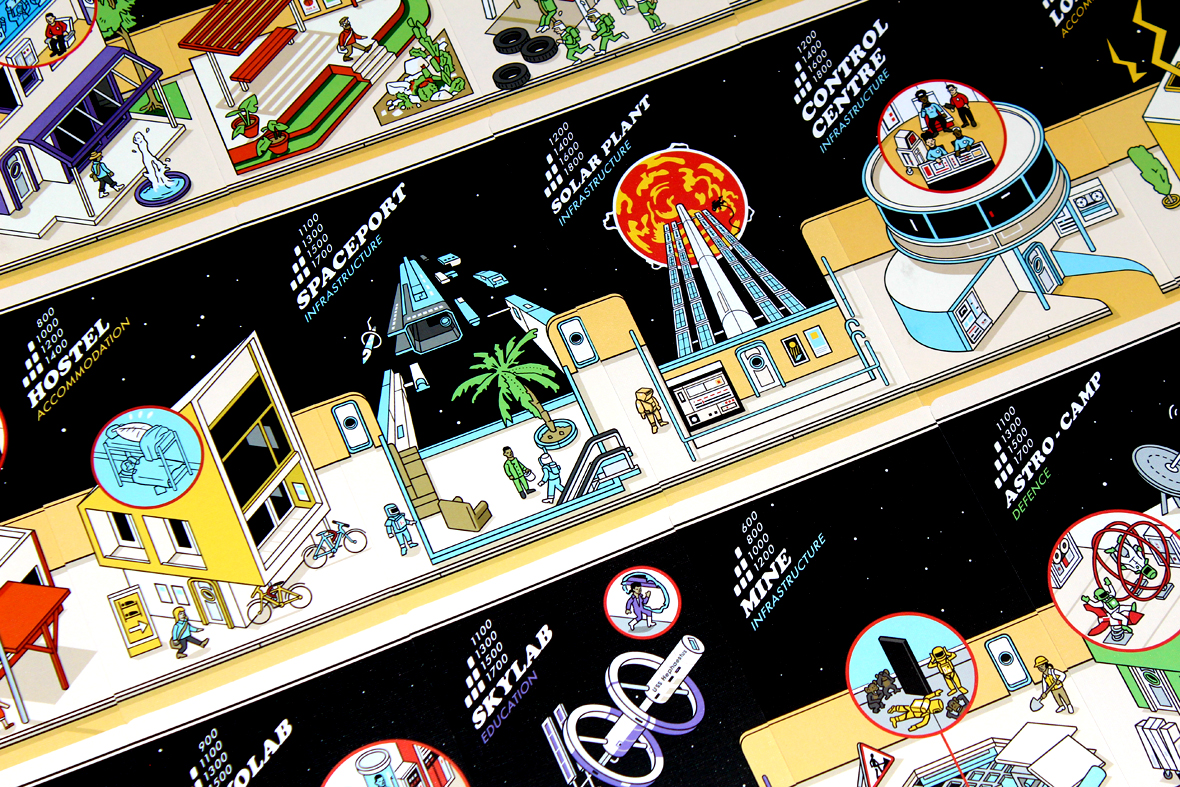 Deal X cards face-up in a line in the middle of the table. X is the number of players, plus two. Give each player five Resource Cards, as well: 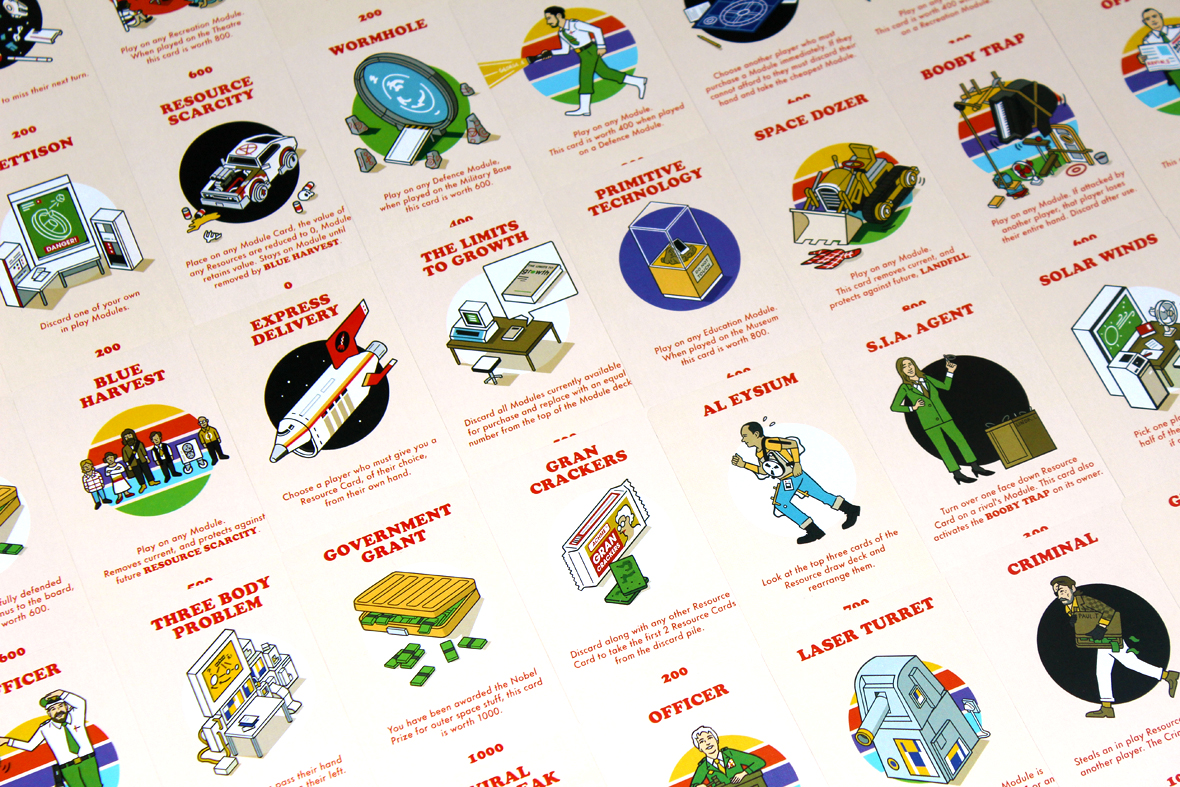 …That’s kind of it. You’ll want to set this Admiral’s Log aside, as well; more on that later.

Pick a player and they’ll start the game!

Like I said, in Home on Lagrange, you’re trying to build the best space station in town. Or, well, space. You do this by attaching modules to your space station, which provide some functionality and add value / aesthetic contribution. Plus some of them are very funny. Regardless, you also need to add resources to make sure that people have things to do, eat, or fight. Once everyone’s built up their station, the best one wins!

On your turn, you must do one of four things:

Here’s the crux of the game; buying modules! You spend resource cards from your hand whose value is equal to or greater than the module you want to buy. Few things worth noting:

Note that modules are really easy to buy, but pretty difficult to remove; be careful with those.

If you gain two modules of the same type, you get an Admiral’s Bonus! You can get more than one if you have two pairs of two modules. They provide extra advantages in a variety of different ways.

Play a Resource Card on a Module

If you have a Resource Card in your hand that has a background (in the circle) matching the color of one of your module, you may play that Resource Card face-down to that module. It’ll increase that Module’s value, but be careful! You’ll likely attract the attention of other, more nefarious players.

Discard a Card and Draw Another

If you can’t do anything else (or choose not to), you must take this action. Discard a Resource Card and then draw a replacement. That’s about it.

At the end of your turn, draw a card from the Resource Deck. Then, discard the Module furthest to the right. Move all Modules to fill in the empty spot(s), and then draw one or two cards to replace the ones that were discarded this turn. Play continues with the player on the left.

End of Game and More

Once every player has all four modules in their space station, the game immediately ends! When that happens, you’re not quite done; total up your scores, sure, but once you’ve determined a winner, consult the Admiral’s Log to figure out the final fate of your space station! Honestly, whoever has the best story should still win.

Not really all that many; the game just takes longer with more players since every player has to finish up in order to complete the game. Since there are more players, there’s potentially more attack vectors, as well. Could be a lot more take-that happening, if that’s what you’re into.

Personally, I think I like it a bit more at lower player counts, as there’s more ability to shape your space station without too much outside interference (and it’s easier to convince players to collectively not use it). Plus, at higher player counts you have to balance the conflict of who to attack, which can also be a bit irritating and encourage players to pile on to the winner (and it slows the game down). Either way, like I said, lower player counts. 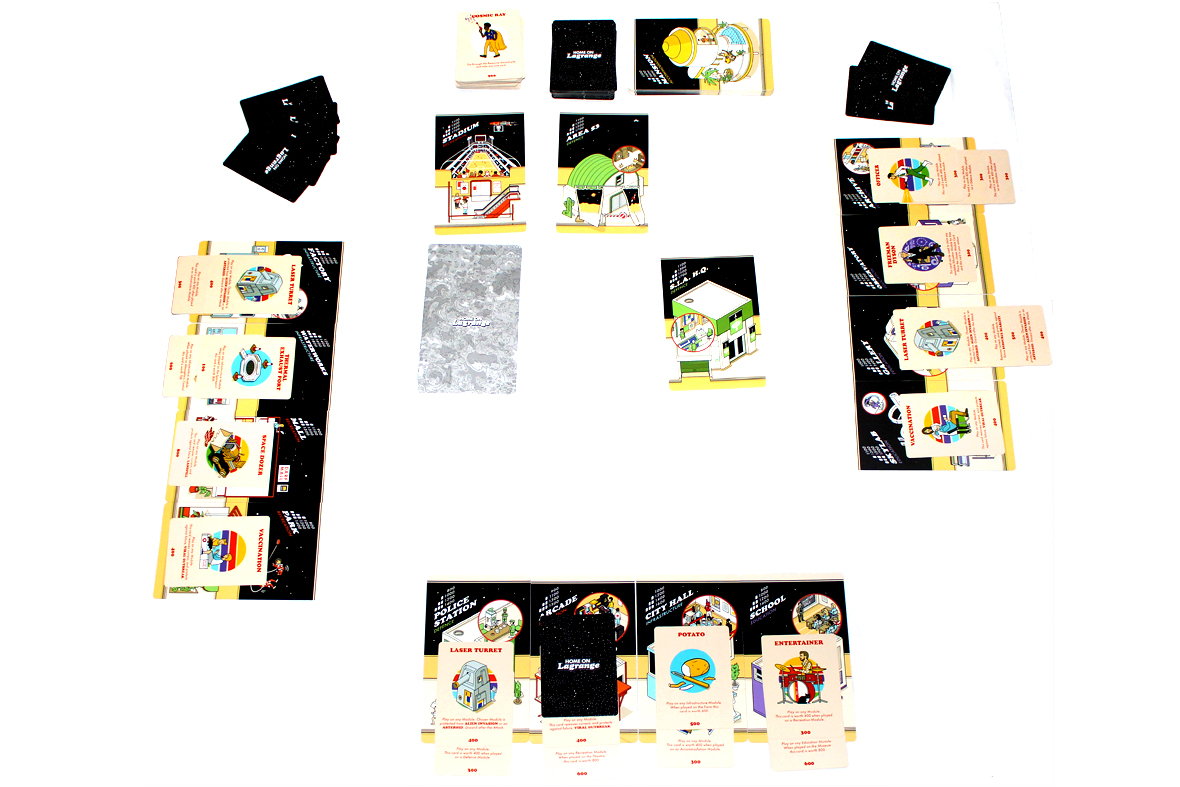 Alright, overall, I have a fair number of thoughts about Home on Lagrange. The core thesis of this is the difference between what makes a game mechanically interesting and what makes a game experience enjoyable. I’ll be upfront: mechanically, not my favorite time. I think it relies a lot on luck of the draw, lacks solid ways to mitigate that luck for other players, and quite often slumps in the middle because players race to buy their first few modules before they have the hands necessary to buy their later ones. Also, the value of resource cards are wildly different, which makes some draws much, much more useful than others.

Got all that out of the way.

You’re probably wondering why I rated it a 6.5 / 10 (somewhere in the “fine to good” range), given that. It’s because I think that the folks at Grizzly Games have really managed to capture what makes a game experience fun. I played this with two friends the other night and we all agreed on the mechanical stuff; we still laughed quite a bit at some of the ridiculous cards we drew or came up with metafiction around which Modules we were looking at or schemed to create a weird hybrid space station with too many pets and guns next to the retirement homes. Giving players space to have that fun is a very smart and skillful design move, and it’s something I don’t get in a lot of games. A really good metric for whether or not I’m going to like a game that tries to be silly or fun is asking how much I laughed while I played, and we laughed quite a bit.

To that end, I think that the game’s got some places where it could use more polish, sure, but I think that this shows encouraging signs that they’ve got a sense of the kinds of game experiences they want to create, and that’s already a good step forward. It makes me want to play their next game, frankly, and that’s a hard thing to get with your first game. That said, I don’t speak for everyone, so if you like games that are on the lighter end and play fast and loose with sci-fi references, or you’re looking for a game with impeccable art to inspire your next space station RPG setting (I bet you could make something out of this for Dialect), Home on Lagrange might be right up your alley! I’d say it’s at least worth checking out.