Full disclosure: A review copy of The Bark Side was provided by Nice Game Publishing.

Another box of games arrived from Germany, so I’ll be covering those over the upcoming weeks and months. I decided to shoot the moon to start and cover what I thought was the smallest game in the box (ironically, it’s only the third-smallest; more on those another time), and trick-taking normally catches my eye, so let’s talk more about The Bark Side, from Korea Board Games! Or, at least, I planned to start with this one and decided to push it to the start of International Dog Month, which I thought was a bit more apt. And fun!

In The Bark Side, you are playing mischievous dog cards, playing pranks around the house and so on. Unfortunately, if you’re not careful, your owner will come home and catch you in the act, and then it’s off to the pound for you! (This is kind of a sad game, when you think about it.) Can you avoid that terrible outcome?

Not much in the way of setup. If you’re playing with < 5 players, remove the 11s and 12s, but then shuffle the cards either way: 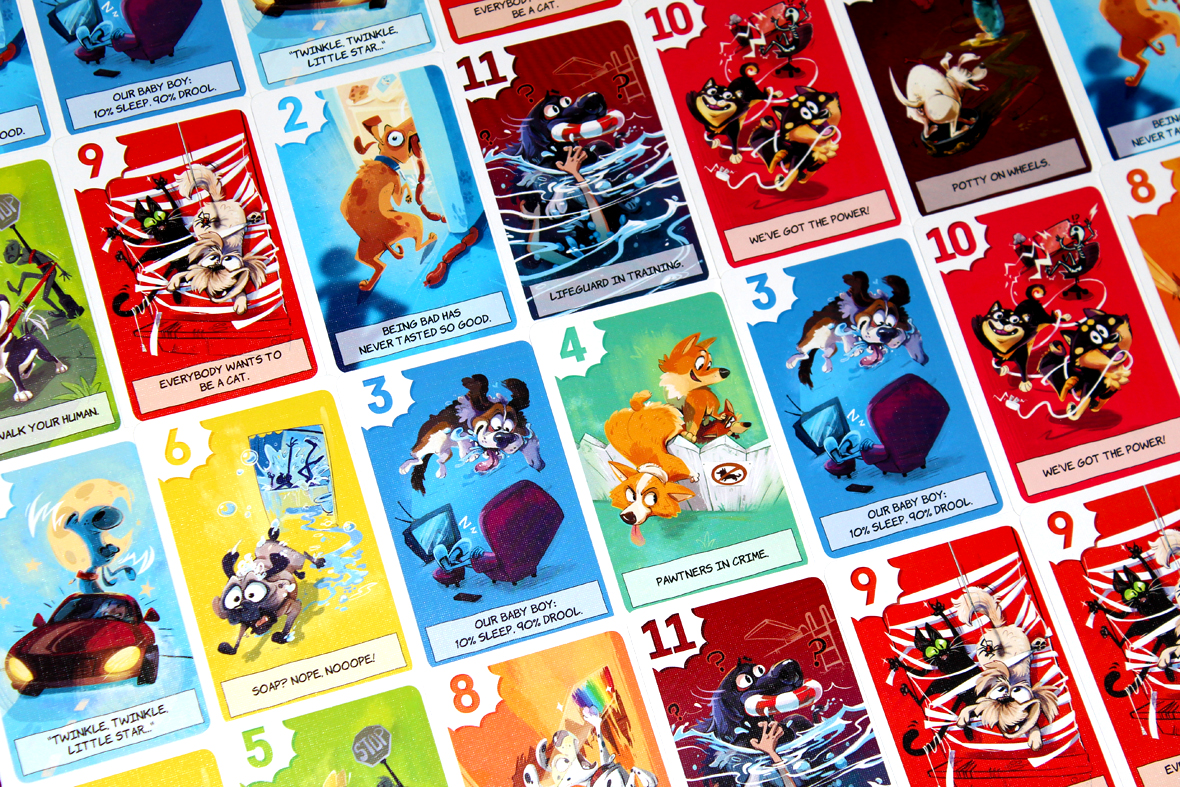 You can also add the Starting Dog (S) and Wild Dog

to the deck as well, if you want:

Set out the Tail Tucked / Untucked card where all players can see it; it starts each round Untucked. 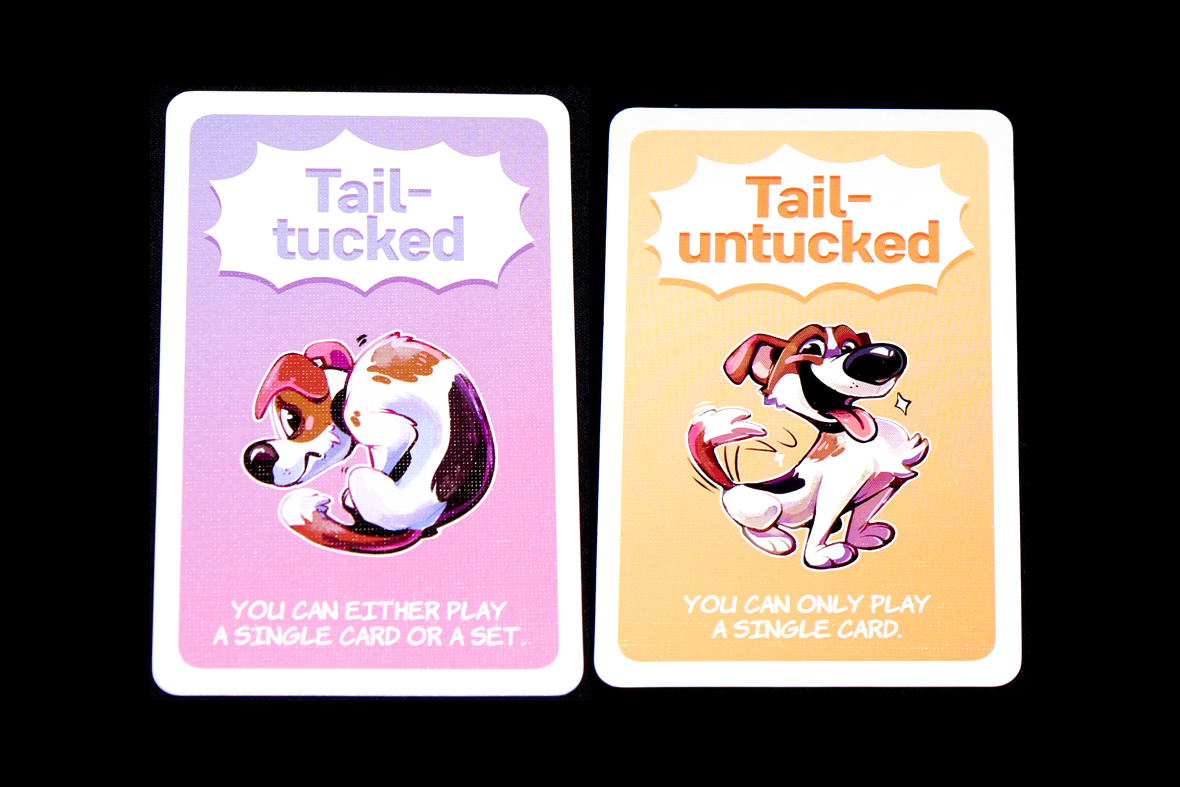 Once you’ve done that, shuffle the deck and deal each player 10 cards; you’re ready to start! 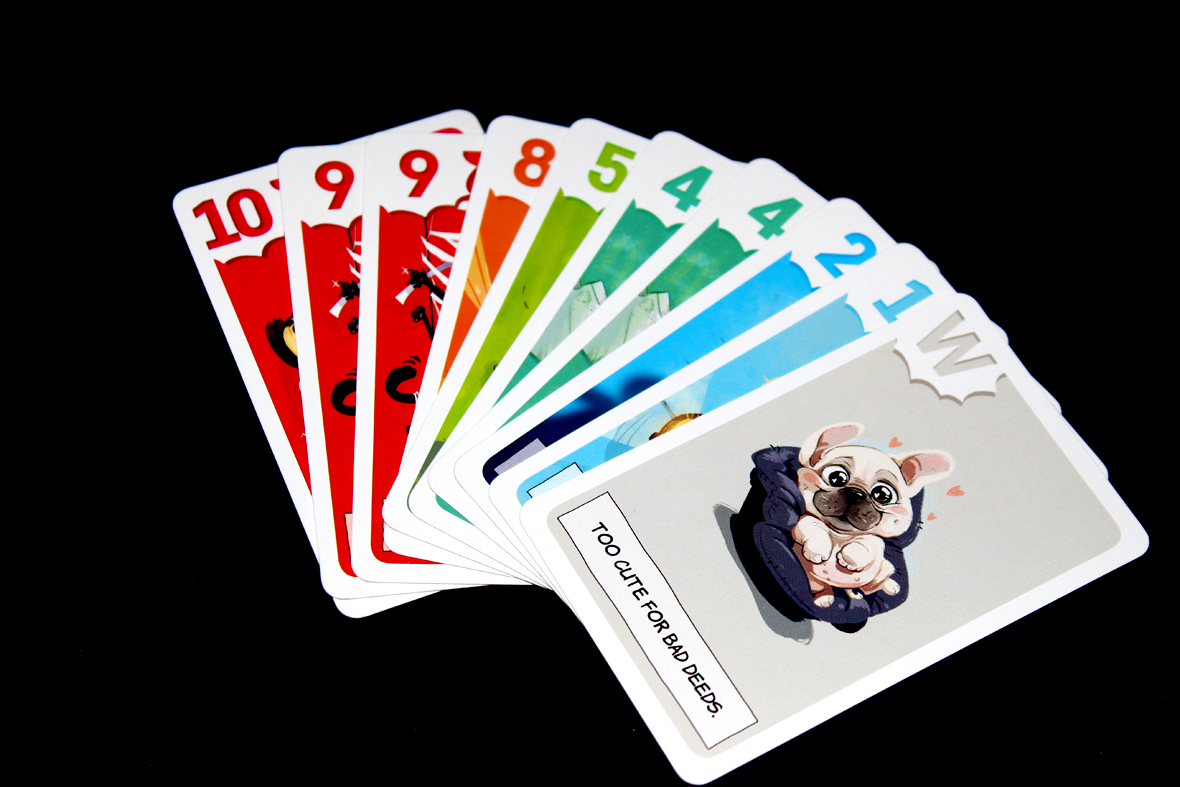 Alright, so, this purports to be a trick-taking game; I don’t really agree since it lacks suits, but that seems like a pedantic debate and I don’t think anyone wins those. Either way, your goal each round is to play cards and take tricks (or don’t; up to you) until the last one; if you take that one, you lose the round. That’s bad. Don’t do that. When you lose a round, you add the card you played and the two lowest cards in the round to your tableau (your pound). The first player to hit 7 different types of dogs in their pound loses; the player with the fewest at that point wins. 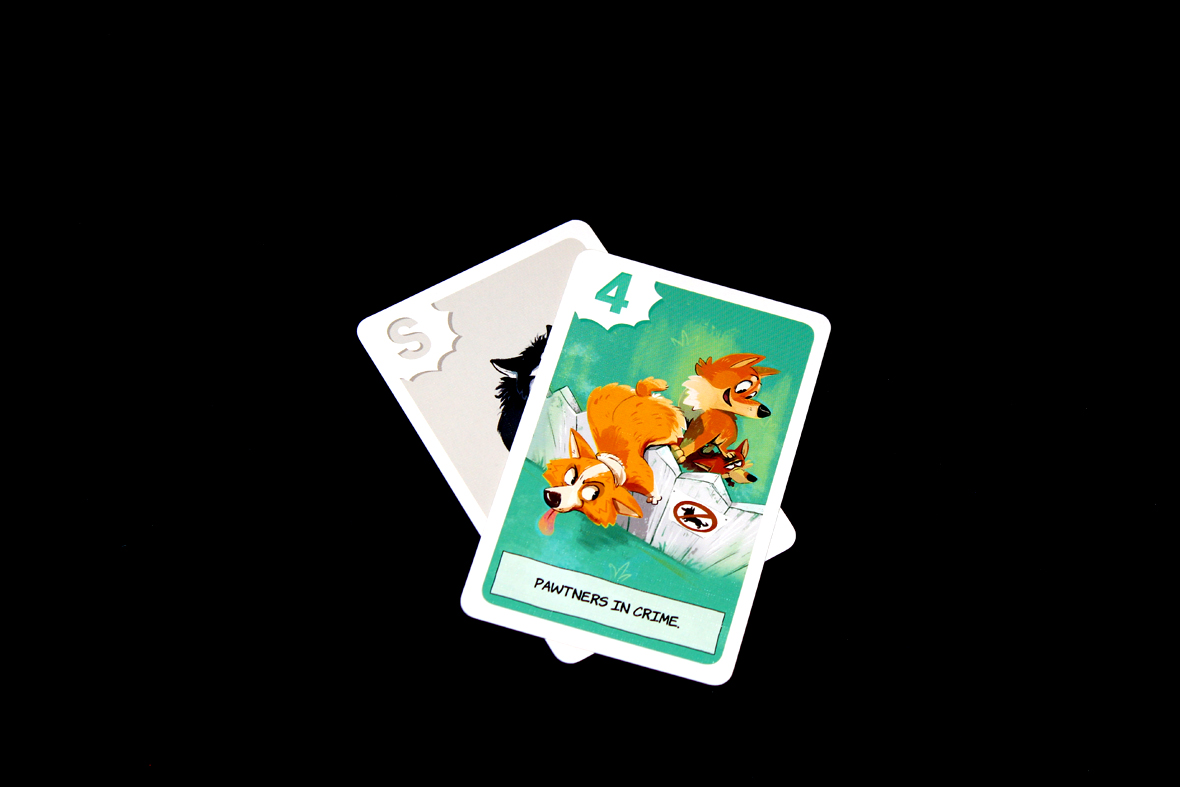 To start a round, each player gets their hand of 10 (sometimes fewer) cards and passes two to the right. Now, the player with the Starting Dog plays it and plays a random card from the hand of the player on their left. If you’re not using that, then, choose a start player randomly. We usually pick the player that lost the previous round. 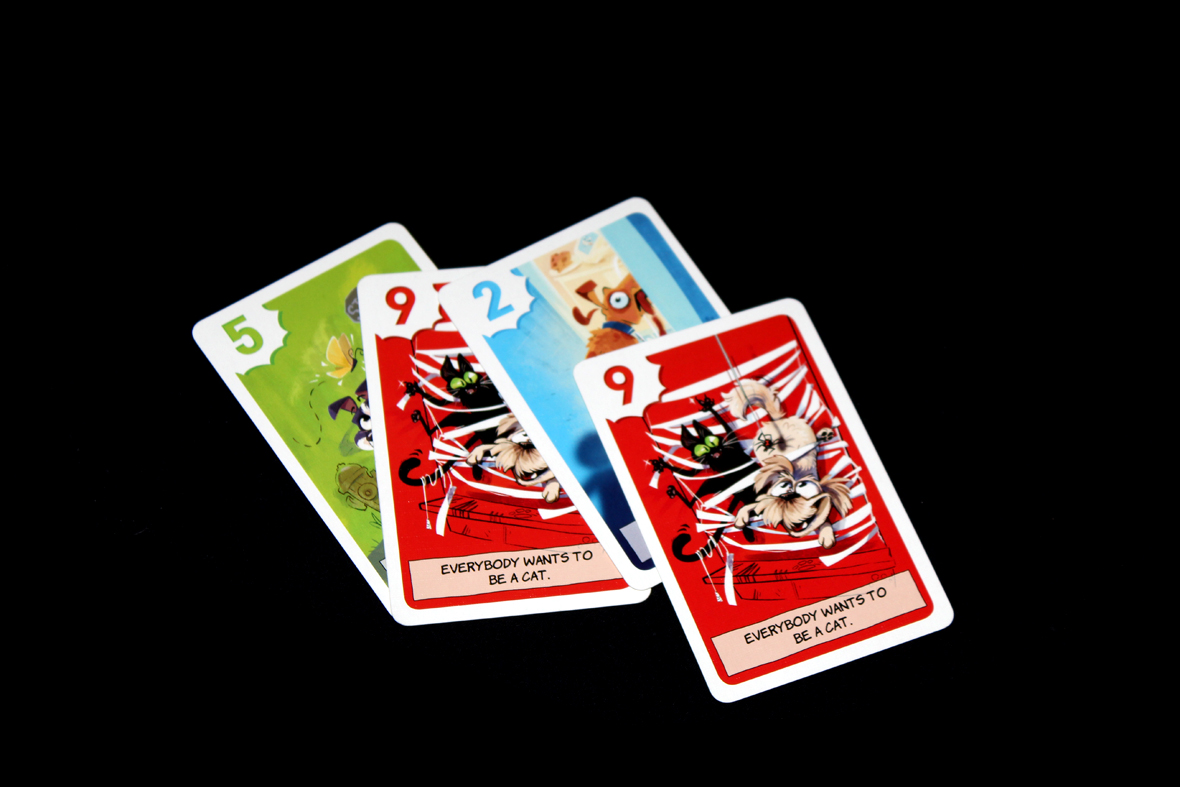 On your turn, you may only play one card. It must be the same or greater than the last card played. If you cannot or do not want to, then you perform what’s called a tail-tucking move and play your lowest available card. When this happens, flip the Tail-Tucking card over to the Tail-Tucked Side. Now, a player starting a trick may play a set of cards instead. When a set of cards is played, all cards played must be the same value, and you must follow it with a higher set (the same number of cards; at least that value or greater). If you can’t, you must discard that number of your lowest cards (if it’s a four-card set, you must discard your four lowest cards). The only rule is that you cannot play a set if it would leave you with 0 cards in hand. 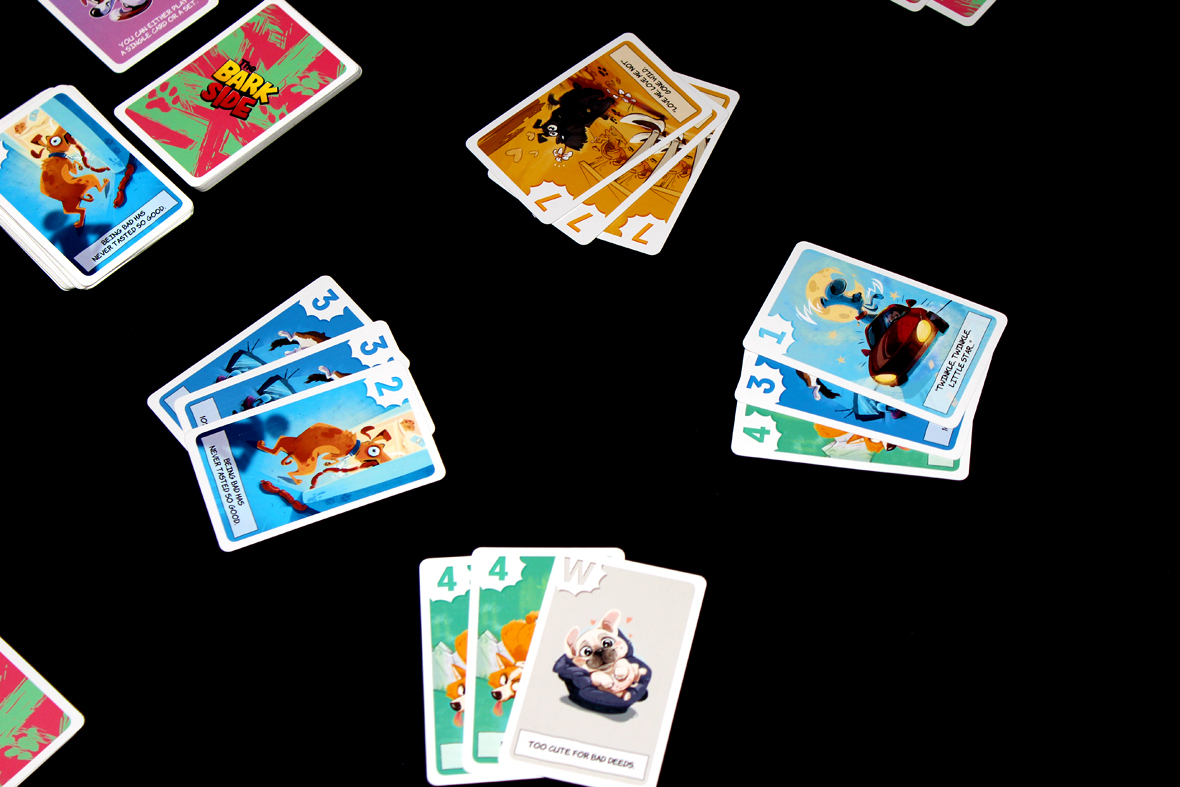 The Wild Dog is a special dog that can be added to a set to boost its size or played as a 0 for a Tail-Tucking move. If you keep it until the end of the round, though, it always wins. Try not to do that.

When every player has one card left, play them (starting with the start player)! The player who wins that trick loses the round, and must take their own card (and the two lowest cards in that trick) and add them to their pound (a tableau in front of them). The remaining cards get shuffled back into the deck and deal 10 to each player, again. If you ever can’t deal 6 cards to every player (the deck shrinks each round) or one player hits 7 different types of dogs in their pound, the game ends! The player with the fewest types of dogs in their pound wins! 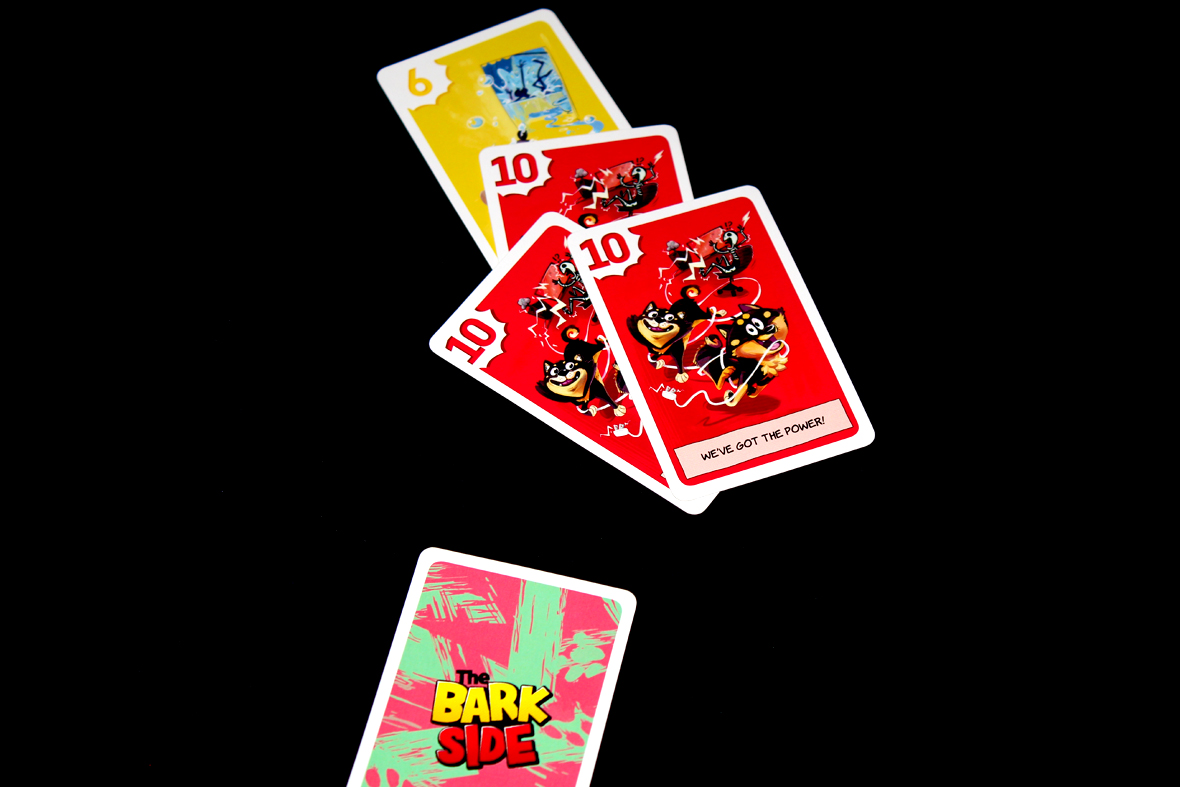 Mostly just that at 5 and 6 you use the 11 / 12 cards. Beyond that, probability suggests it’s unlikely that you’ll have large sets of the same card as player counts increase, so you’ll probably see fewer sets getting played. At three players, the Starting Dog isn’t the most exciting play either, since it kind of just dumps Start Player at the third player’s feet (and can potentially break up sets for the second player) so I’d recommend not using that one below four+. Beyond that, no real preference for player count; I’ve had fun with it at every level. 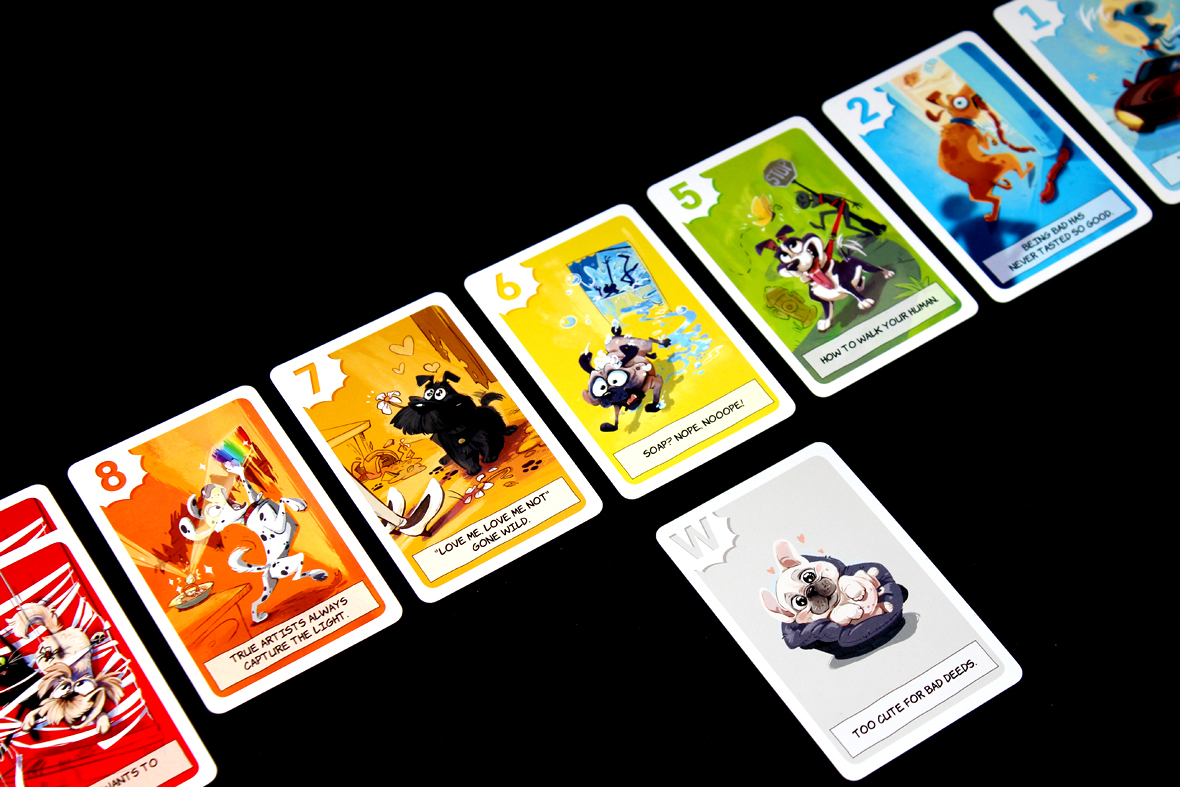 Overall, I’ve been having a lot of fun with The Bark Side! It’s a cute, quick card game with fantastic, bright, and fun art, which always kinda sells me on a game (especially a small one, to be honest). My major complaint is that I don’t feel a ton of ability to direct the game beyond “away from me”, but that’s not the worst thing; I can’t lose the game if I never take the final trick, so I just try to focus on that and see where that gets me. Generally speaking, eventually everyone gets hit with a final trick, but sometimes you can end the game before your number comes up for that rotation. That’s kind of ideal, in my opinion. Beyond that, yeah, it’s a quick ladder-climbing card game that’s reminiscent of trick-taking, which are two mechanics I’m quite fond of. If you’re looking for a quick game in that vein or you just love dogs, The Bark Side is worth taking for a spin! I’ve had fun with it.