Full disclosure: A review copy of Targi was provided by KOSMOS.

Alright, onto the next one. We’ve been talking a fair bit about KOSMOS, recently, which is a bit funny given that I haven’t reviewed any EXIT games in a while (but one is coming!). I know they make other games; I’ve just reviewed a lot of the EXIT games, is all. We talked extensively about Imhotep and its expansion over the last couple weeks, so, let’s try something new. And by new I mean a bit older than Imhotep, but recently reprinted; the two-player classic, Targi!

Targi pits players against each other as members of the Tuareg tribes, trying to trade goods to benefit their families and increase the scope of their wealth. Will you be able to make a name for your tribe?

First thing is to set out the border cards: 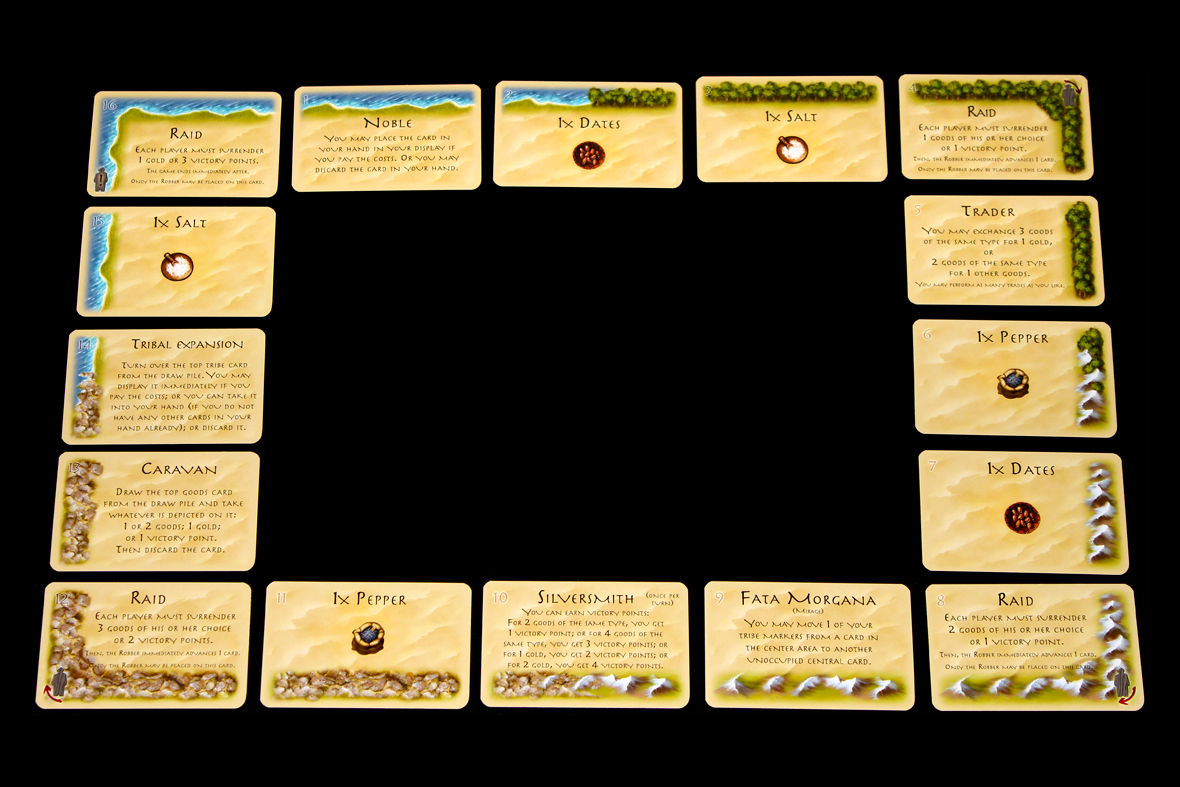 They’re numbered 1 – 16, handily, and they have images on one side and text descriptions on the other. Super handy! Make a square out of them, keeping the edges lined up properly. 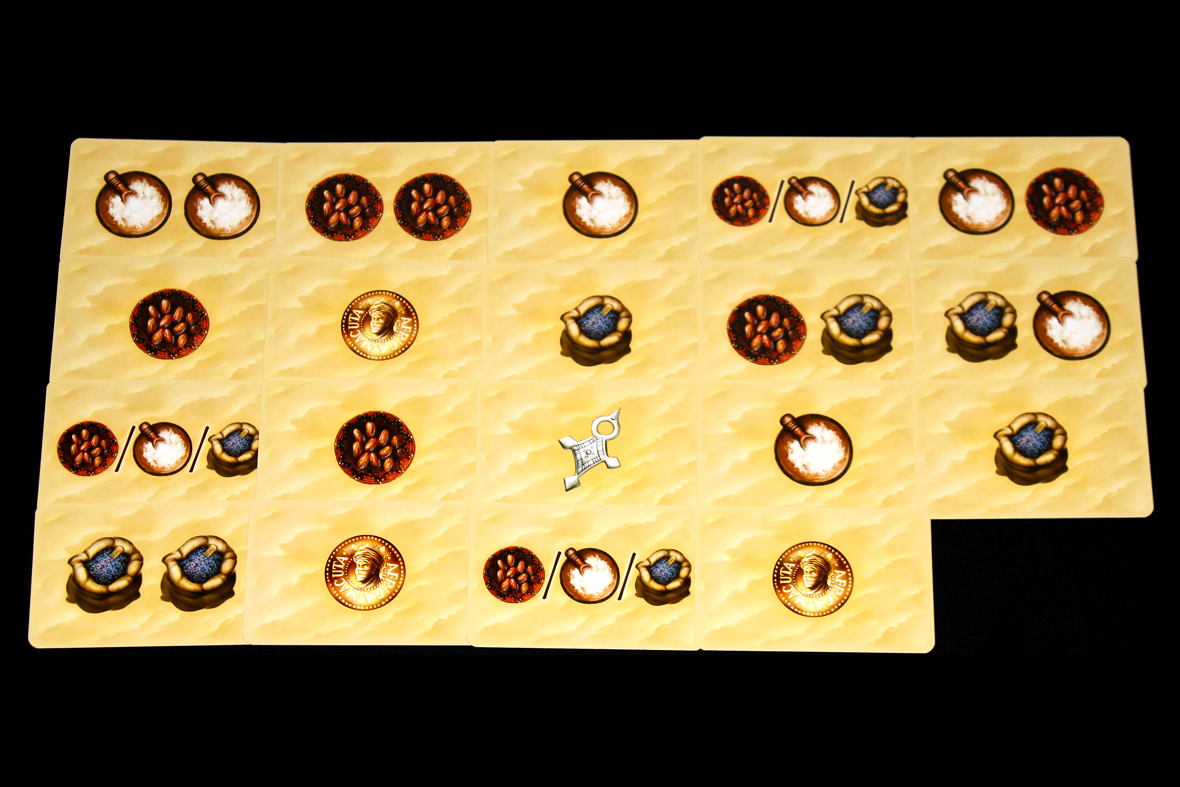 Place them next to the Caravan space. Shuffle the Tribal Cards:

Place them next to the Tribal Expansion Space. Place the gray Robber next to the space marked “1”:

The other figures are the Targis; give each player a set of two in the same color, along with their Tribal Markers (the wooden cylinders). Very tribal. Anyways, flip Goods and Tribal cards so that they alternate, using 5 Goods and 4 Tribal cards to fill the middle 9 spaces. Additionally, get out the resources: 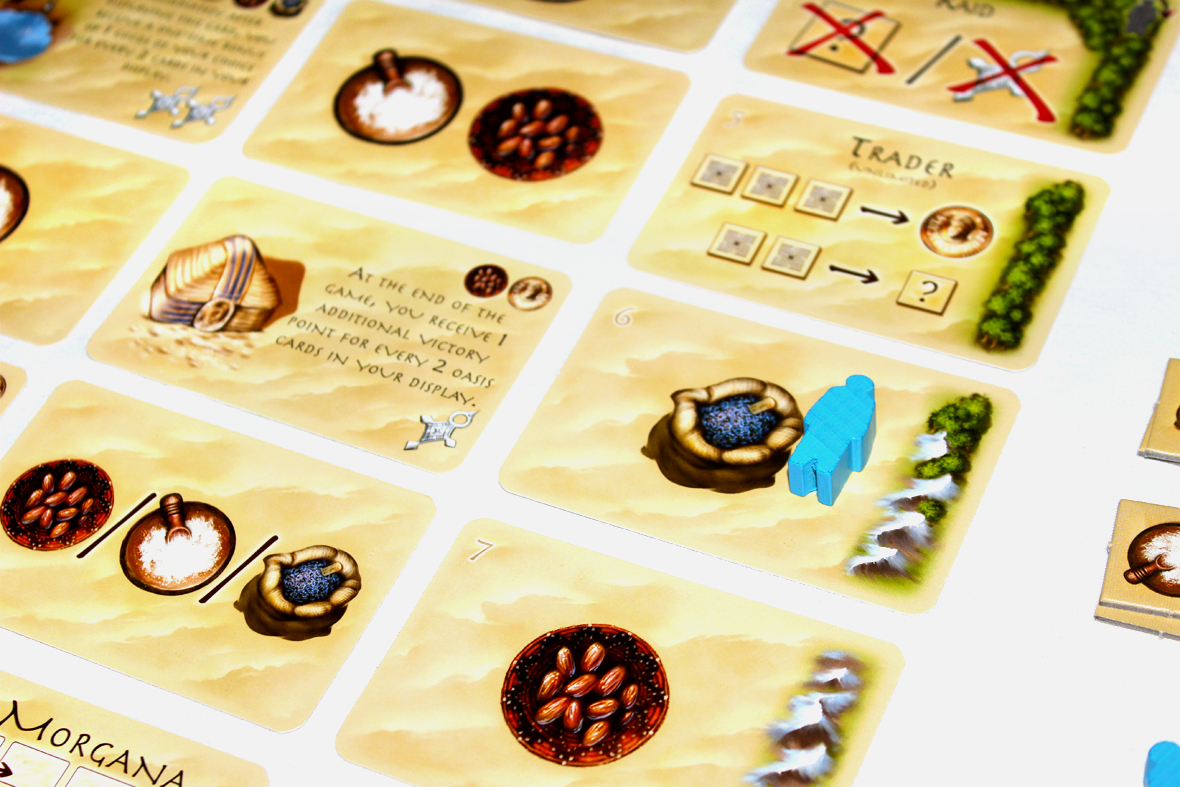 Over the course of the game, you’ll be working on buying Tribal Cards to try and build up your tableau. Some cards will give you abilities; others will give you points. Either way, every round, the Robber advances (the first round it will advance onto the “1” card). If it advances onto a Raid space, follow the instructions. Once that’s done, take turns placing your Targi tokens on non-Raid spaces on the outer edge of the board. A few rules: 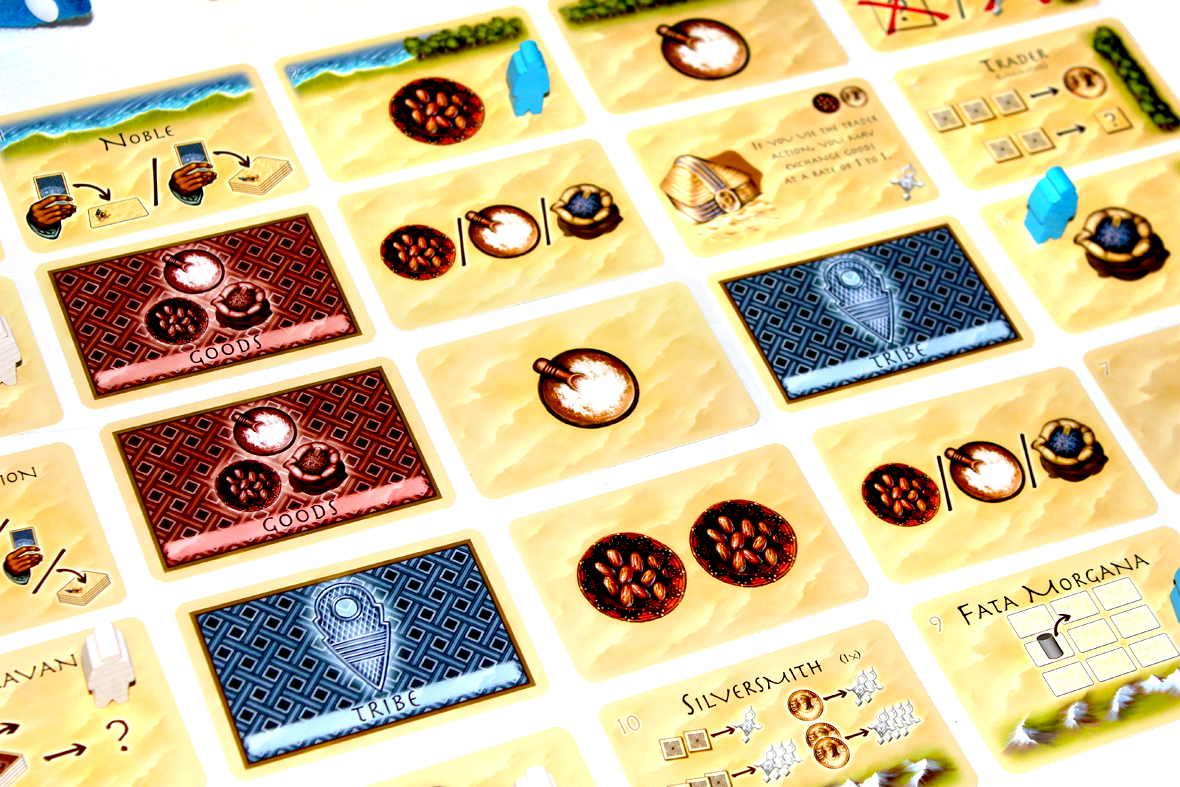 Now, in player order (not that it matters, terribly), take those actions. You can take any action in any order. The Targi actions generally give you abilities or let you draw cards or trade goods; the Tribal Marker actions let you get resources or take Tribal Cards. When you take a Tribal Card, you may add it to your hand if you don’t already have a card in your hand (you must use the Noble action to discard the card in your hand if you already have one, which is rough), or you can spend the resources on the card to play it to your Display. 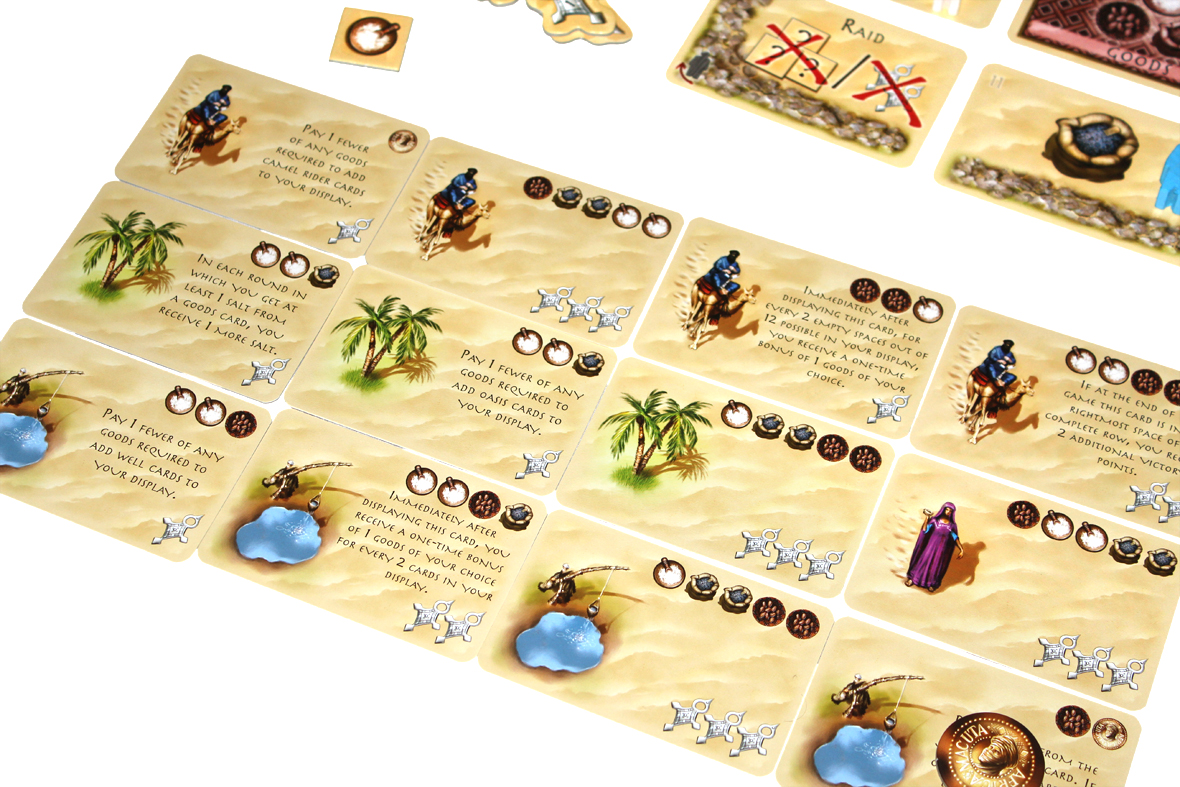 Your Display is a 3 row, 4 column area for Tribal Cards that’s built from left to right. You do not have to complete a row before starting another, but making sure that your cards have the same symbol or all different symbols may help you in the long-term.

At the end of your turn, if you have more than 10 Goods and / or more than 3 Gold, you must return any excess to the supply. Naturally, don’t do that. You can have more than the limit on your turn, but you need to be below the limit by the time your actions have completed.

Once both players have resolved their turns, change who the starting player is and go again! Play continues until one of two things happens:

When either happens, complete the round, and then score! You get the sum of your Victory Points, the pictured points on your display cards, and potential bonuses! For each row in your display, if it’s completed:

None! Two players only, though I hear solo and 3 – 4p variants exist on the web. Do whatcha want.

Overall, I think Targi is a very solid game! It’s got a pretty novel framework to it, but the nice thing about that is that it doesn’t come with a ton of rules overhead to compensate. It’s a simple game without too many complications, which is nice. Only a few types of resources, a few sets of actions, and not a ton of variance in what comes on the cards. The Tribal Cards are the most complicated part, but even those you can read before you use them and you don’t necessarily interact too much with your opponent’s cards (save for the one that forces you to place one fewer Targi in the next round). That’s a good foundation for a game to have, that simplicity. And I respect that a lot about Targi! Like I said, my only real gripes are that it uses the same VP token for each denomination and I wish the insert were better, which is pretty good. Hopefully KOSMOS will localize the expansion, because I’d be excited to play Targi again in the right circumstances. Either way, if you’re looking for an interesting worker placement game with a cool action selection mechanic or you just really like salt, pepper, and / or dates, Targi might be worth checking out! I’ve really enjoyed it.