Back on the doujin wagon! Big Cat Games provided a lot of games to review, so let’s hit up the next one, High! High? High!!, a basically unsearchably-named card game of futility and foundational overinvestment.

High! High? High!! has some similarities to No Thanks, another classic card game, but this one’s going to hurt you a bit more (but far less than Tokkome). Plan your picks, bet against your opponents, and don’t get caught matching anyone else’s cards! How high can you go?

Not much to set up. There are the cards, which you should shuffle:

There are also the scoring tokens:

If you’re playing at 3 players, remove one of each numbered card and one scoring token.

Make a row of cards, face-down:

This will be your round tracker. Next, make a line of face-up cards:

I guess it’s only a line at 4 players. Oh well. Once you’ve done that, you’re ready to start!

High! High? High!! is a pretty quick game of pressing your luck. On your turn, you’ll either draw or withdraw until all players have withdrawn, have five cards, or have played 10 turns. Once that happens, scoring occurs, and the player with the most points wins!

You may instead withdraw by taking one of the square gem tokens. They’re worth 6, 3, and 1 point at the end of the round. If you withdraw, you “pass” on every subsequent turn. Note that you cannot withdraw if you have taken 0 cards.

Once all players have taken a turn, flip the leftmost face-down card of the face-down row and have players take another turn. These cards try to help you by giving you more information on what’s still available.

After 10 rounds, you’re done. You can end this earlier if every player withdraws (remembering that if you have 5 cards, you must withdraw). Now, we move to scoring.

Scoring is where this game gets cruel. Maybe not as much as Tokkome, but still pretty harsh. Start with your Blue cards. Every player reveals theirs. If any players match, they have knocked each other out, and they cannot score any cards higher than the cards below their match. This means if Player A has 1 and 2, and Player B has 2 and 3, Player A gets 1 point for the round; Player B gets 0. Rough. That said, Player A and Player B keep their cards around, because they may be able to knock other players out in the Yellow and Red cards. Check those next, following the same rules as previously. Once you’ve done that, add bonus points for the players that took glass tiles:

The player with the most points wins! You can, if you want, play best of three rounds, but it’s up to you.

The player count matters a bit, but that’s part of what makes it exciting. At five players, you should expect the scores to be lower; there are a lot more players pulling cards, so your chances of collisions are pretty aggressively high. I suppose the lowest chance of that is at four players, since so many cards end up out of play (16, as opposed to 9 at 3 or 11 at 5). There’s something to the idea of withdrawing earlier at higher player counts, since you have a guaranteed 6 points (and nobody else can say that), but it also can be useful to try and grind it out and see if you can get enough low values to knock other players out, if that’s how you want to live your life. No strong preference on player count for this one, though probably not 3, just out of a profound desire to avoid variants, when I can. 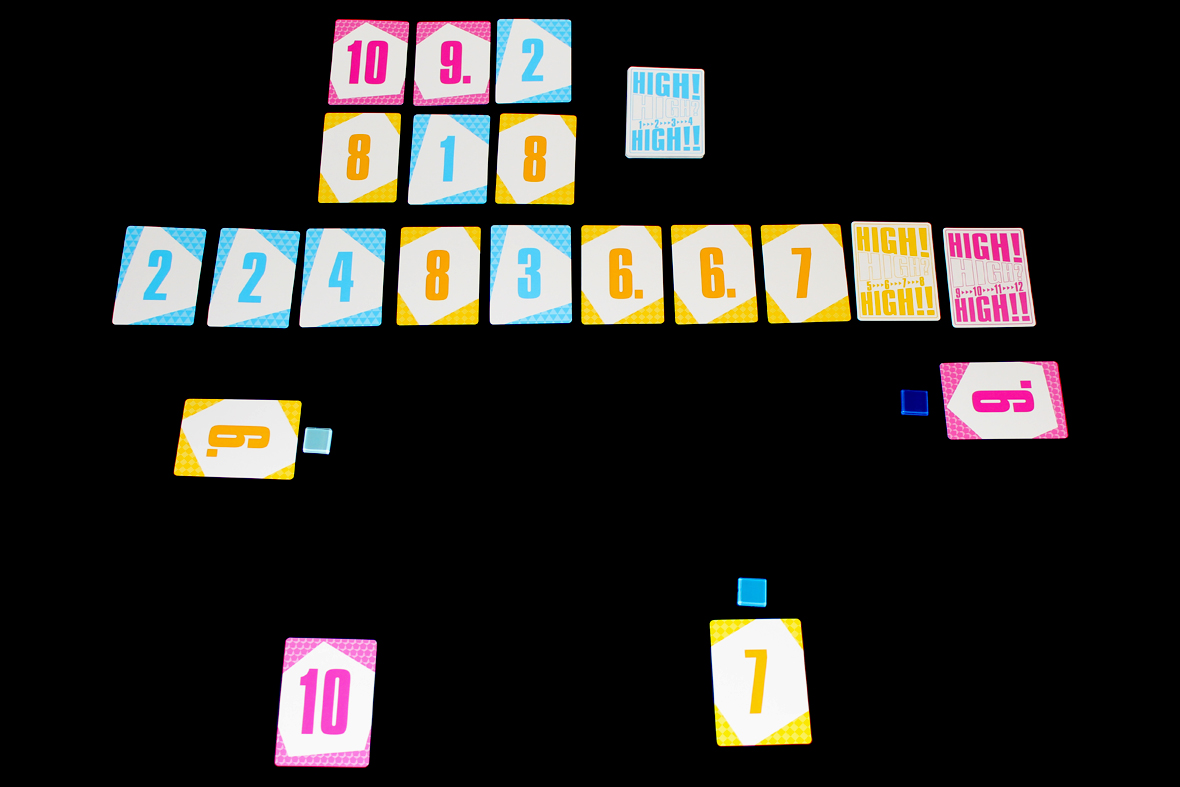 Overall, I think High! High? High!! is pretty fun. It helps that I don’t 100% play it by the rules, eschewing the multiround structure for a quick-and-simple single-round game (or five+ rounds of a single-round game, which is also pretty fun). When I play it, I’m mostly there for laughs or the persistent feeling of futility you get when another person successfully ruins your entire scoring structure, but that’s just life, isn’t it? It is for this game, at least. People who may enjoy this game are the people who like the sorta introductory card games that got a lot of us into board gaming — Coloretto, No Thanks!, Saboteur, Hanabi, etc; all those small box games that end up in a lot of people’s all-time favorites. That said, between this and Tokkome, I’m probably going to end up going after those cruel, cruel horses every time. Either way, if you’re looking for a fun, quick card game with some bright art and cool pieces, High! High? High!! is a solid choice! I quite enjoyed it.