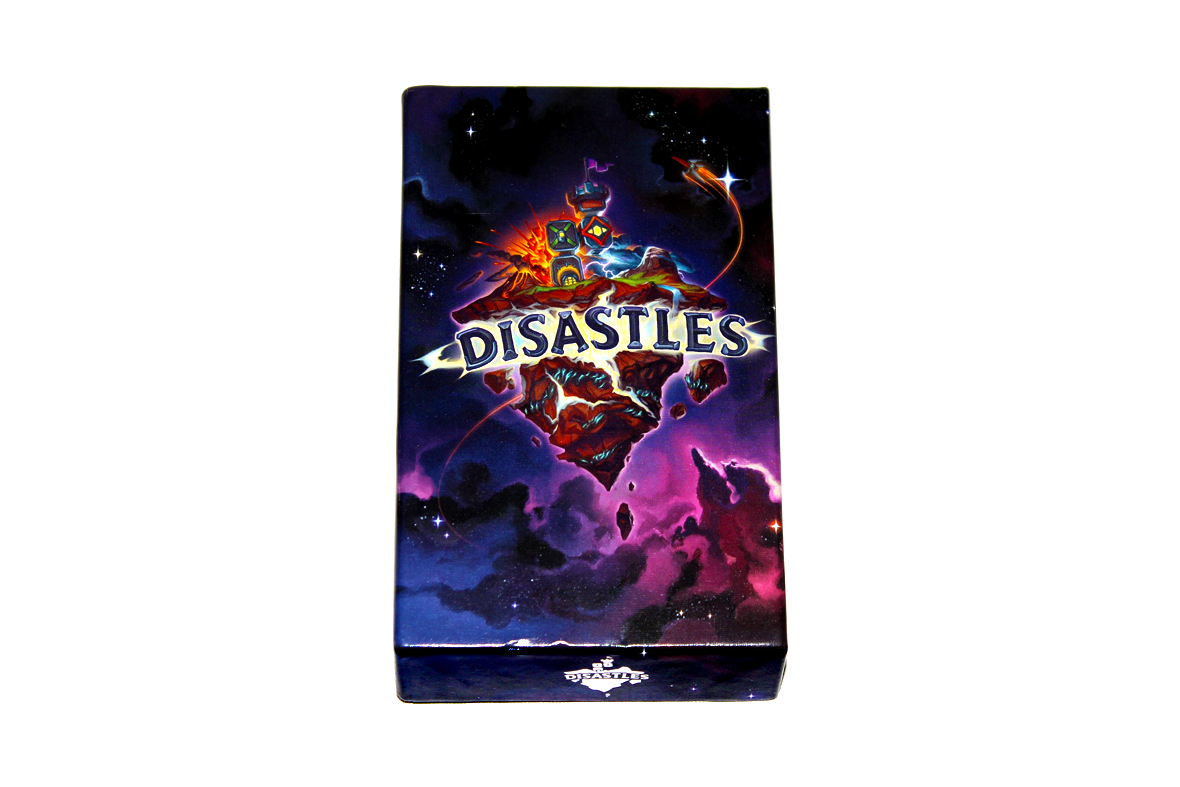 Full disclosure: A review copy of Disastles was provided by the Disastles team.

I’m running a giveaway this week for two copies of Catch the Moon! Find out more here.

After doing enough Kickstarter previews, it’s always fun to get to try a game that’s actually in fulfillment. Disastles hit Kickstarter a while ago, and it’s been going out to backers, now. I’m a sucker for games about castles (but not about medieval times in general, but definitely about Medieval Times, the restaurant), so I naturally jumped at the opportunity to check this one out. I was somewhat surprised by the tiny box, but let’s see how big the game inside is.

In Disastles, players take on the role of Scavengers, looking to find fortune and build a castle that can protect it out in the Worlds of Old! It’s all very spacey. Unfortunately, you’re not alone out there. It would be bad enough if you had to deal with other annoying scavengers, but there’s a reason why these Worlds of Old have been ruined and abandoned, and those reasons are still up and active! Can you accumulate wealth without running afoul of some major disasters? Or will the only thing you manage to find be a catastrophe?

Not much to do, setup-wise. Every player gets a Throne Room and places it generic-side up:

There are special sides to them, but that’s an alternate game mode and I’m not gonna cover it in this review since I’m focusing on the base game. Set aside the Catastrophes: 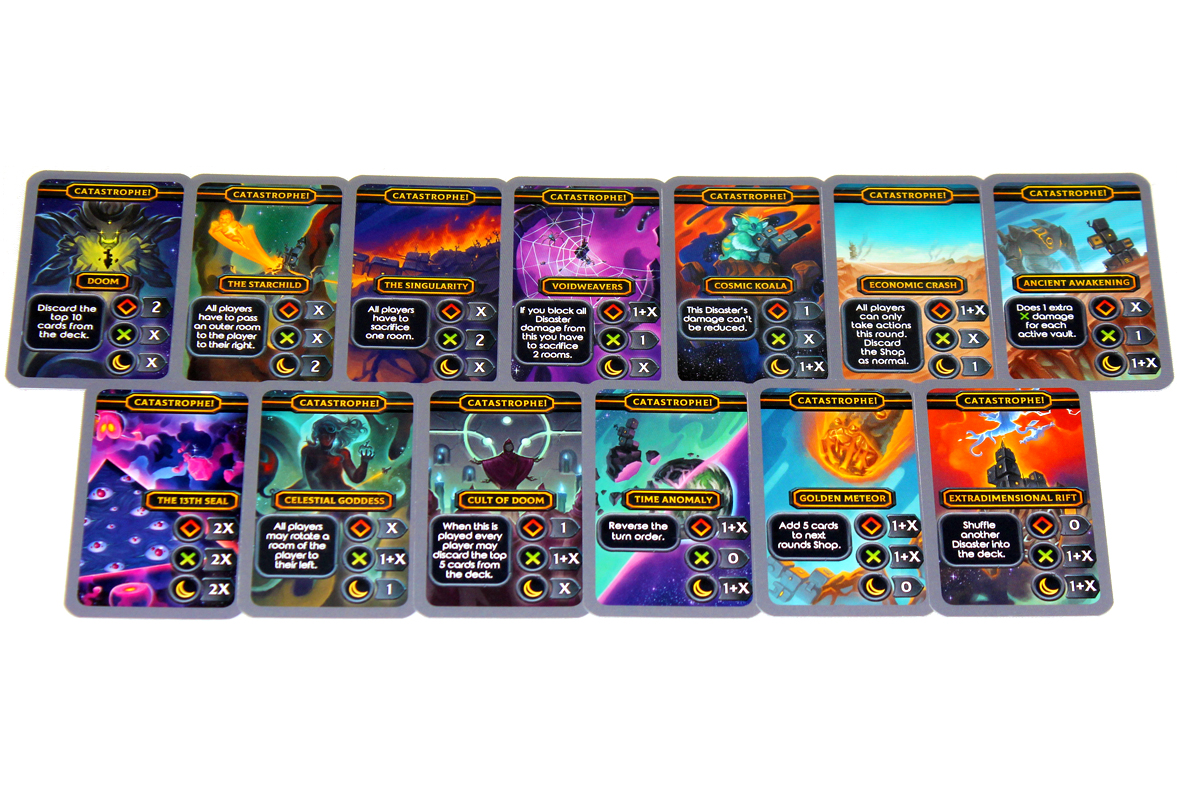 Similarly, another alternate game mode. For the standard game, you’ll want the Disasters, instead: 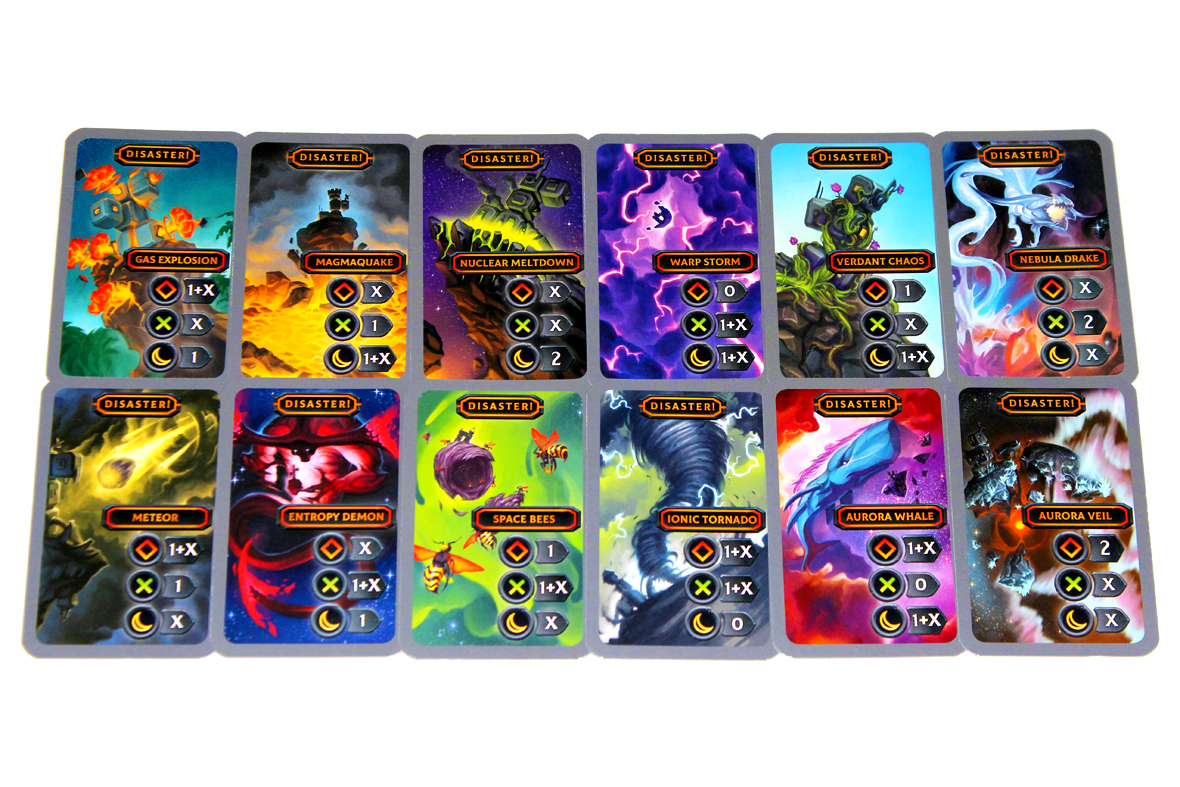 Remove the top 15 or so cards of the deck: 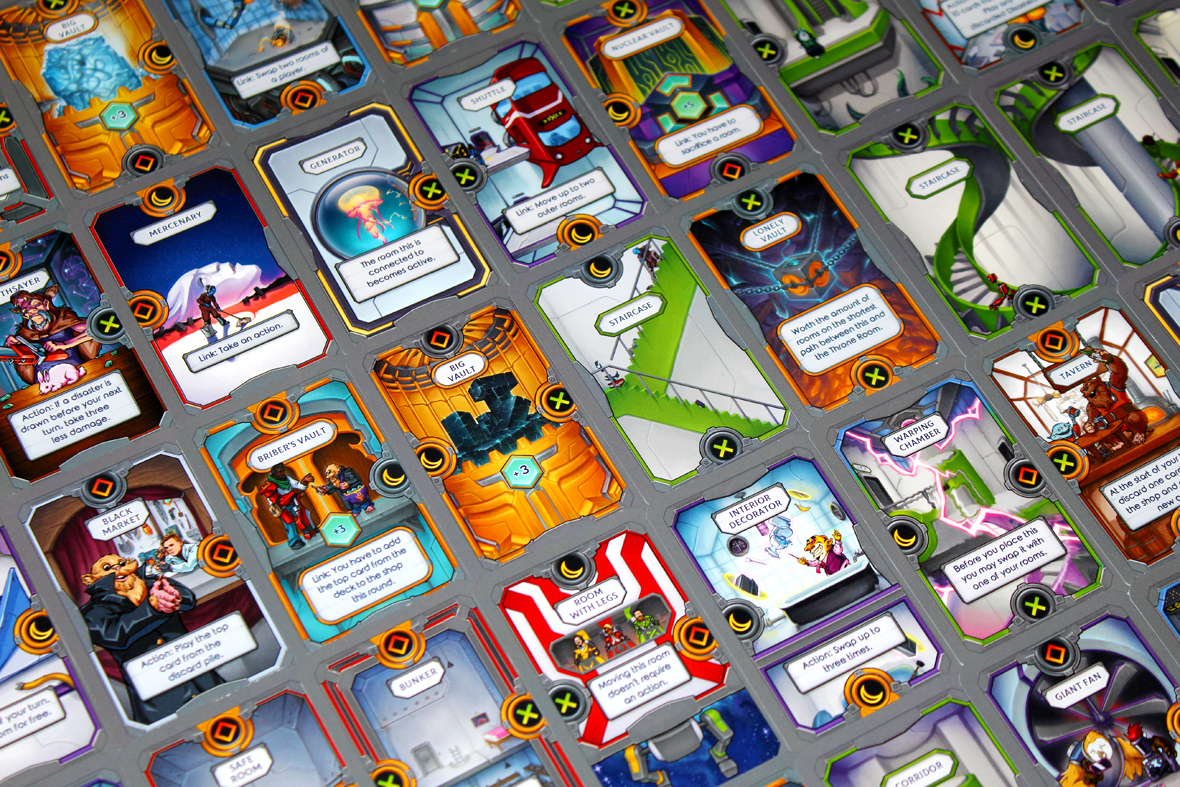 And shuffle 6 (or more, if you want to hurt yourself and everyone else) into the remaining cards (the bigger pile). Put the pile you removed back on top; this gives you a bit of a starting buffer. You can modify that buffer, too, if you want; it’s really all up to you. Give a player the “I get to go first!” starting player card, so that you know who that person is. Flip the top five cards of the deck face-up into the center and you should be ready to get started! 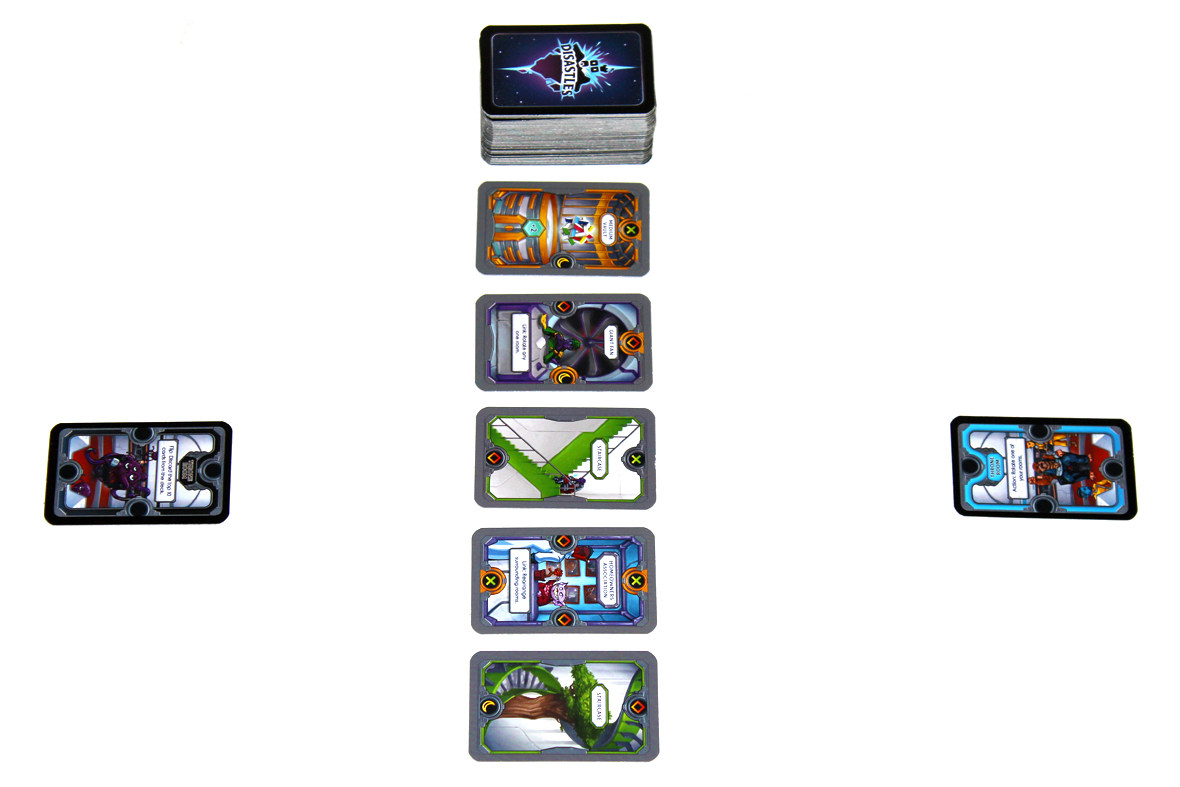 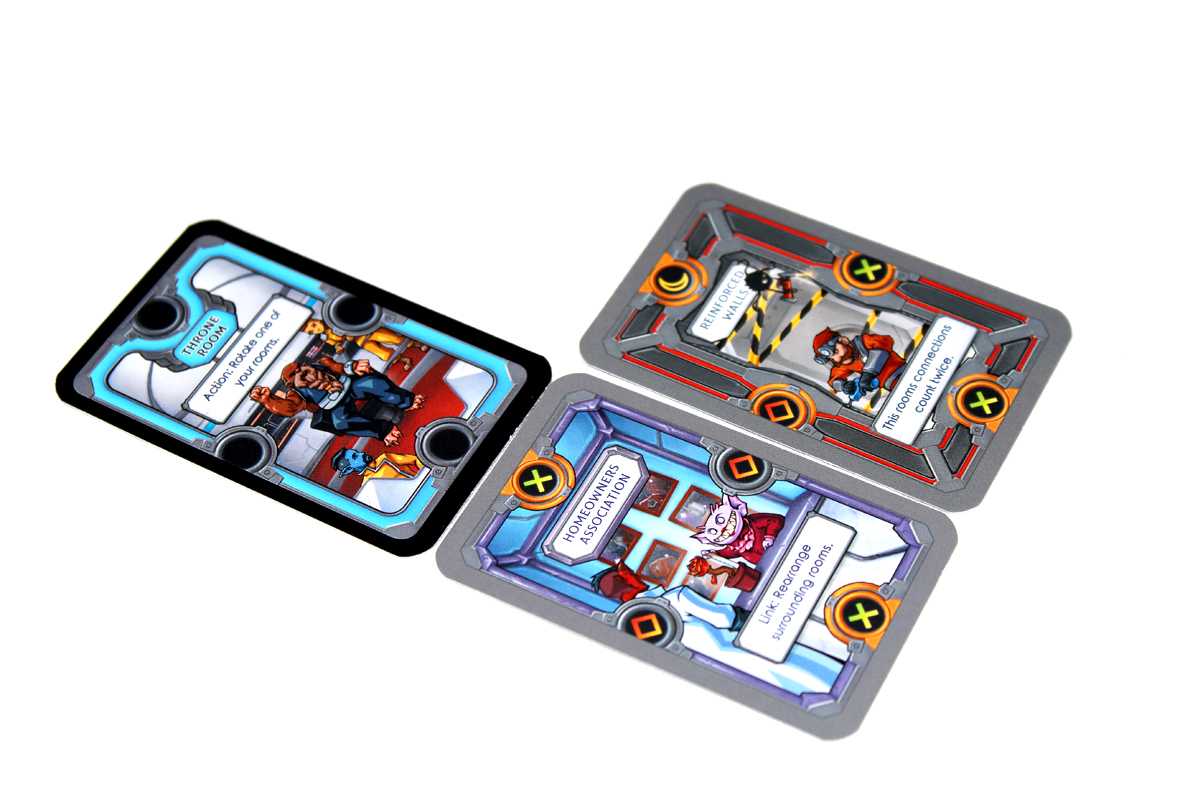 So, a game of Disastles takes place over a series of rounds, ending after the final Disaster (which means if you’re as bad of a shuffler as I am, the game might end pretty quickly!). Players will build up their castles to mitigate these Disasters or die trying; either one works, honestly.

On your turn, you may do one of two things: 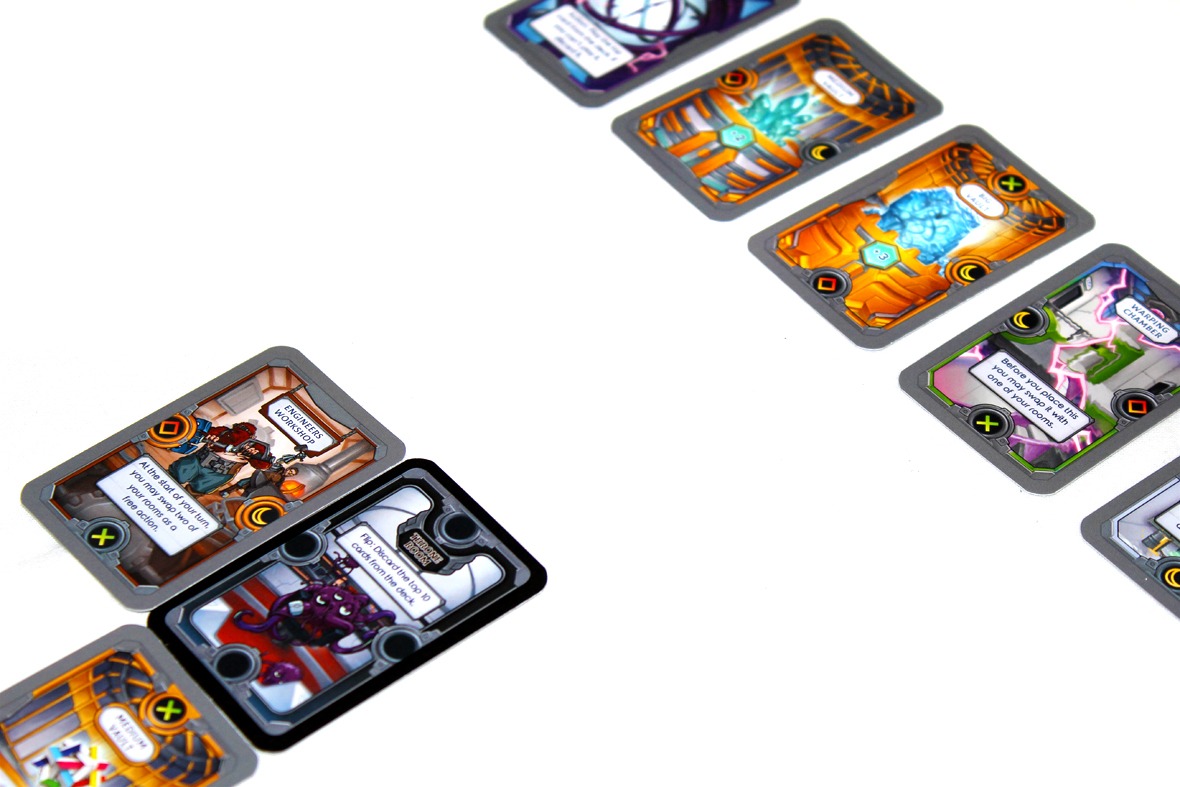 For this one, you may take any card from the Store Row and add it to any place in your castle, following connection rules.

These rules effectively state that you must match a circular “connection point” on one card with another. These can be slightly weird, but you cannot rotate a card before it’s placed. You cannot put a connection point against a blank wall, though. 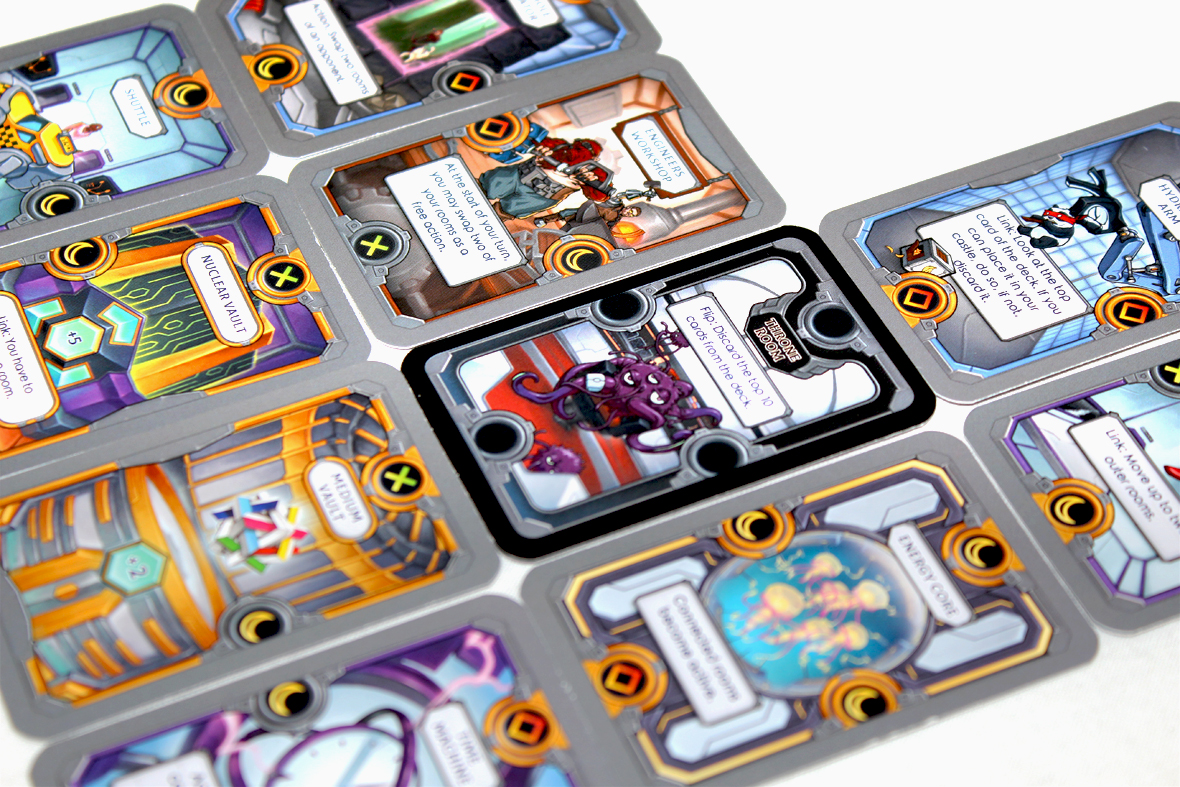 This one’s a bit simpler to explain, so we’ll talk about it second. You may take one of several actions:

You can also pass, if you want. Either way, once every player has taken a turn, discard all the cards still in the shop and pass the Starting Player card to the left. Now, refill the shop, as well, flipping five new cards. 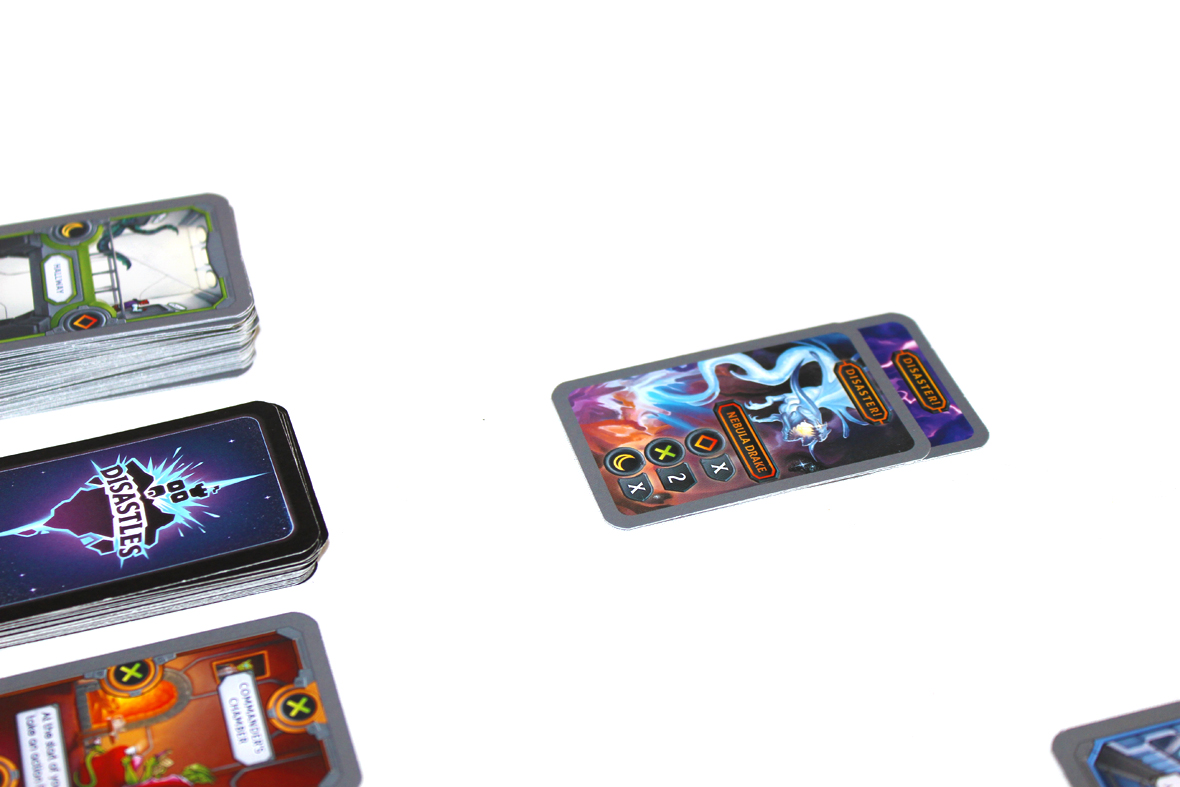 Whenever a Disaster is revealed (either by being drawn by a player, revealed when the shop is restocked, or discarded by a card action), it activates! Well, the first one does. If you draw more, shuffle them back into the deck and draw again. If you draw more again, activate them after the first one. You can only get so lucky.

Disasters deal damage to every player, usually depending on how many Disasters have previously been drawn (represented by an X). Sometimes it’ll have just a number, which is a flat amount of damage. I hear the Catastrophes even have effects …

Anyways, Disaster damage can be blocked by connections. Each Disaster deals damage of a type, and for every complete connection of that type in your castle, you reduce that damage by 1.

For every point of damage you can’t block, you must remove a room from your castle. It can be any room you’d like, provided you do not split your castle into more than one distinct unit. If you’re truly unlucky and you somehow have to discard your Throne Room, you immediately lose the game. After the Disaster is dealt with, it is removed from the game; draw a new card to replace the Disaster. 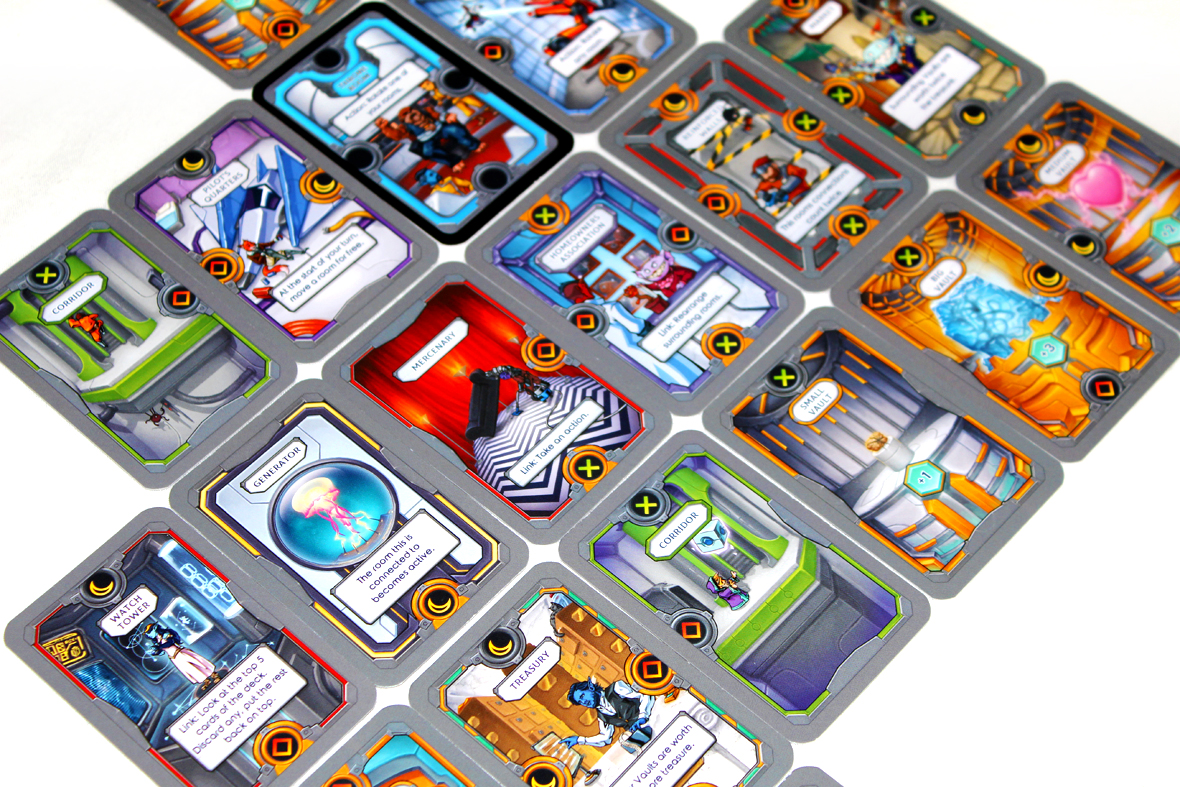 As mentioned previously, the game ends when all of the Disasters have been drawn. It can end sooner if all but one player is eliminated, in which case, the surviving player wins, but generally it ends after the last Disaster. To determine the winner, check each players’ active Treasures. The player with the most wins!

The major ones are the ones that come with any sort of game with some light take-that; it’s totally possible to have dogpiling at higher player counts. Amusingly, one of the reasons I prefer lower player counts isn’t that, it’s that you tend to get better cards and can build up better combinations of castles at lower player counts, since you’re only ever getting your first or second choice (worst-case) at two players. I’d argue that there’s no real advantage to having additional players in the game, unless they end up making themselves the blunt instrument that you can use against your hated rivals. Up to you, really. If you value high-chaos games and believe you can make anything work even in the worst circumstances, then I’d definitely recommend you take Disastles on at higher player counts. Me, I prefer order to entropy, so I’ll probably stick at the lower end of the spectrum. 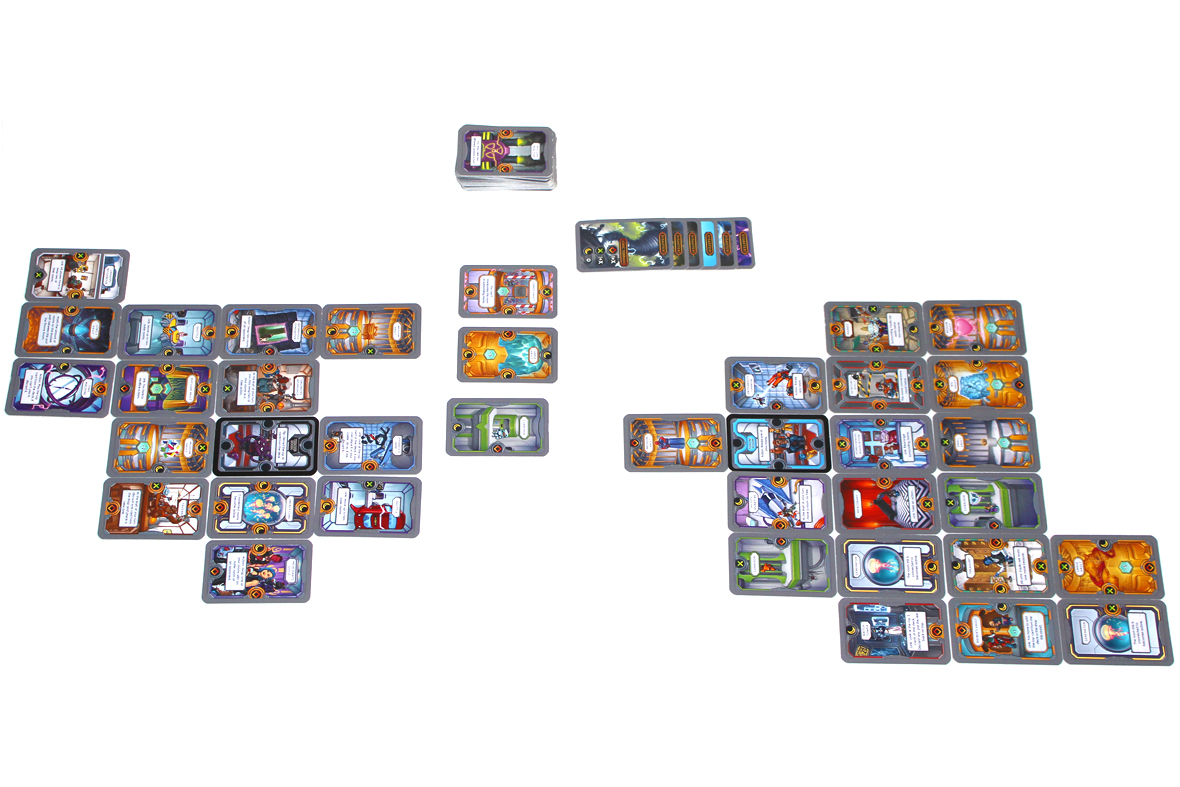 Overall, I like Disastles! Like I said, it reminds me of Mad King Ludwig, but with cards instead of fun pieces. That’s a tiny bit of a bummer, but, as a counterpoint, it also takes maybe 30% of the time to play, so, that’s also a bonus. Disastles doesn’t have much in the way of analysis paralysis, I think, unless you’re playing with someone who wants to test every configuration of every card with every card in their tableau, and, uh, tell that person to stop. The nice thing that this game adds that I like is the presence of an external threat that players have to deal with periodically; it focuses players on a force that isn’t other players, and so you spend more time when learning the game building yourself up instead of tearing other people down. The potential for those teardowns is still very much there, yes, but you can somewhat avoid it by just increasing the game’s difficulty. I’m not altogether unconvinced that the game would be smoothed out a bit if you handled the Disasters like Pandemic’s Epidemics and just somewhat evenly distributed them into the deck, but they chose not to go that route and to just have them very much randomly distributed. To each their own. Add in some whimsical space art and you’ve got yourself a fun little game, in my opinion, and a pleasant Kickstarter success. If you’re looking for that kind of tableau-building action with a bit of player interaction, Disastles might be right up your alley! I’ve enjoyed the game and am glad that I got a chance to try it.