Full disclosure: A review copy of The Towers of Arkhanos was provided by IDW Games.

I’m still running a giveaway this week for two copies of Catch the Moon! Find out more here.

It’s been a while since I’ve gotten to review much from IDW! I think the last thing from them I reviewed was, uh, Death Note: Confrontation, almost a year ago! I remember that one; almost a roll-and-write / bluffing game. Really interesting; still would super recommend checking it out. Or, at least, that was true previously. Now it was Sonic the Hedgehog: Crash Course. Scheduling is so fun. Now, surprisingly, I’m playing one of their games with no license, the recently-picked-up The Towers of Arkhanos! It seemed to have a pretty successful Kickstarter run, so no surprise it’s been picked up for wider distribution from IDW; let’s dive in.

In The Towers of Arkhanos, you play as apprentices of a mighty wizard who has just discovered the ruins of Gil-Garoth. The wizard is Arkhanos, in case that wasn’t clear. You’ll team up with your school of magic to try and help him channel that power by building towers and increasing the magic. Word on the street is that you can also be imprisoned in the tower until the end of time, but that’s probably just a rumor, right? Which school will earn the most prestige and help Arkhanos achieve even greater magical heights?

Setup isn’t too bad You’re going to want to give every player a player board:

And meeples in their corresponding color:

The meeples with stickers are the Master Meeples. There should be some starting tiles with stars on the spaces on the back:

Shuffle those four. Put three in a triangle shape face-up (star-side down) and the fourth, face-down (star-side up) in the middle. Shuffle the rest of the tiles: 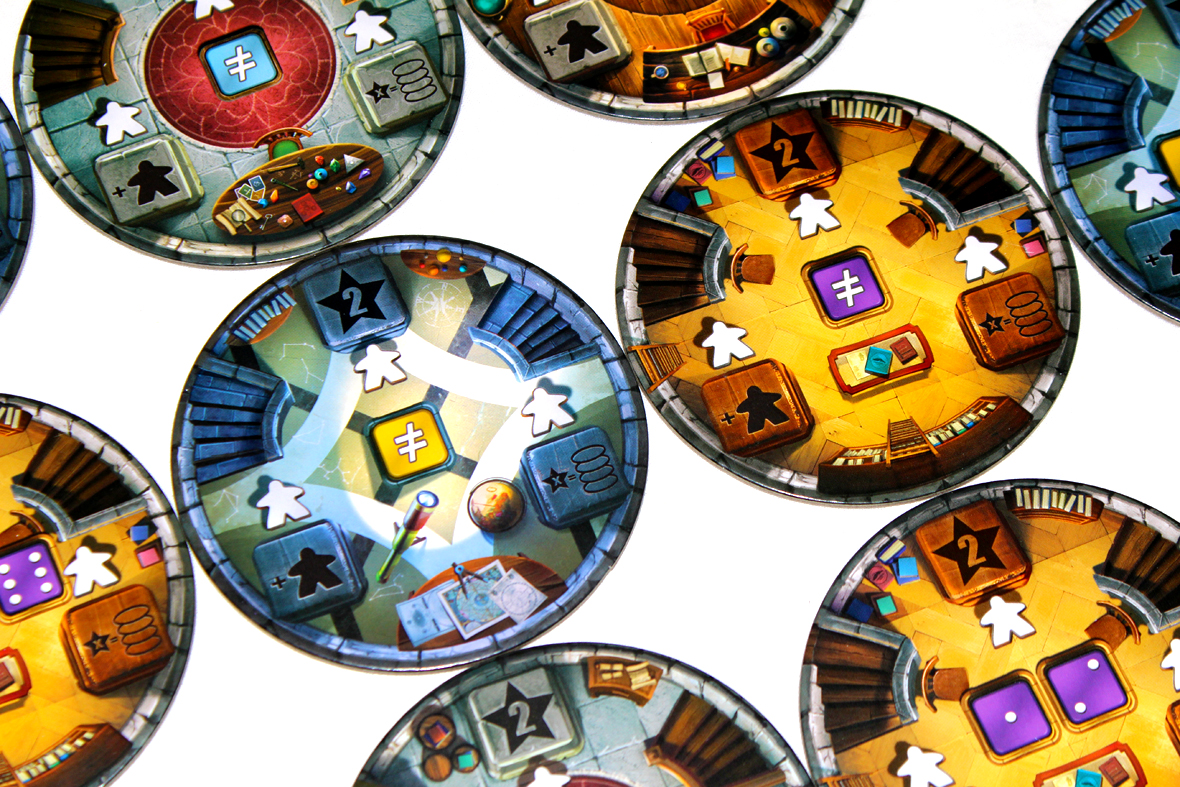 Make a face-up stack to one side. Set side the points, as well:

Place them in the dice bag: 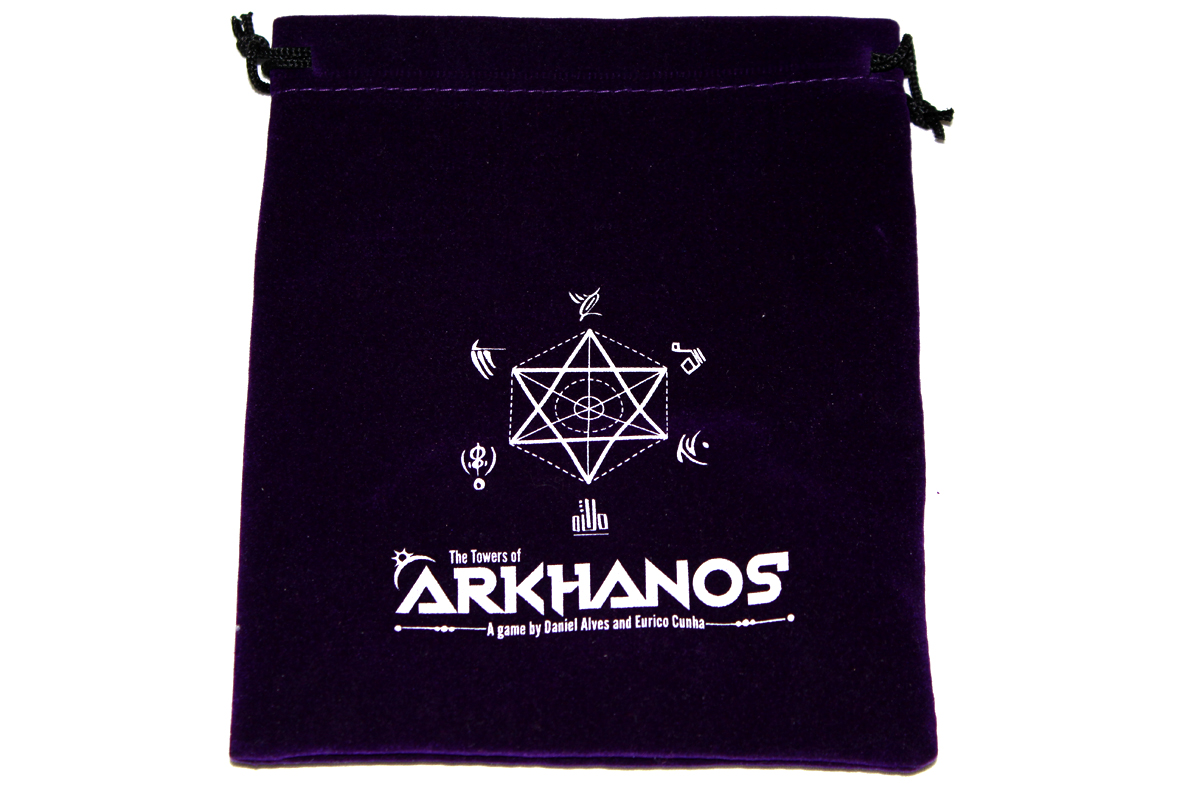 And then set the mana board within view of all players:

Once you’ve done that, you should be all ready to start! Choose a player to go first. 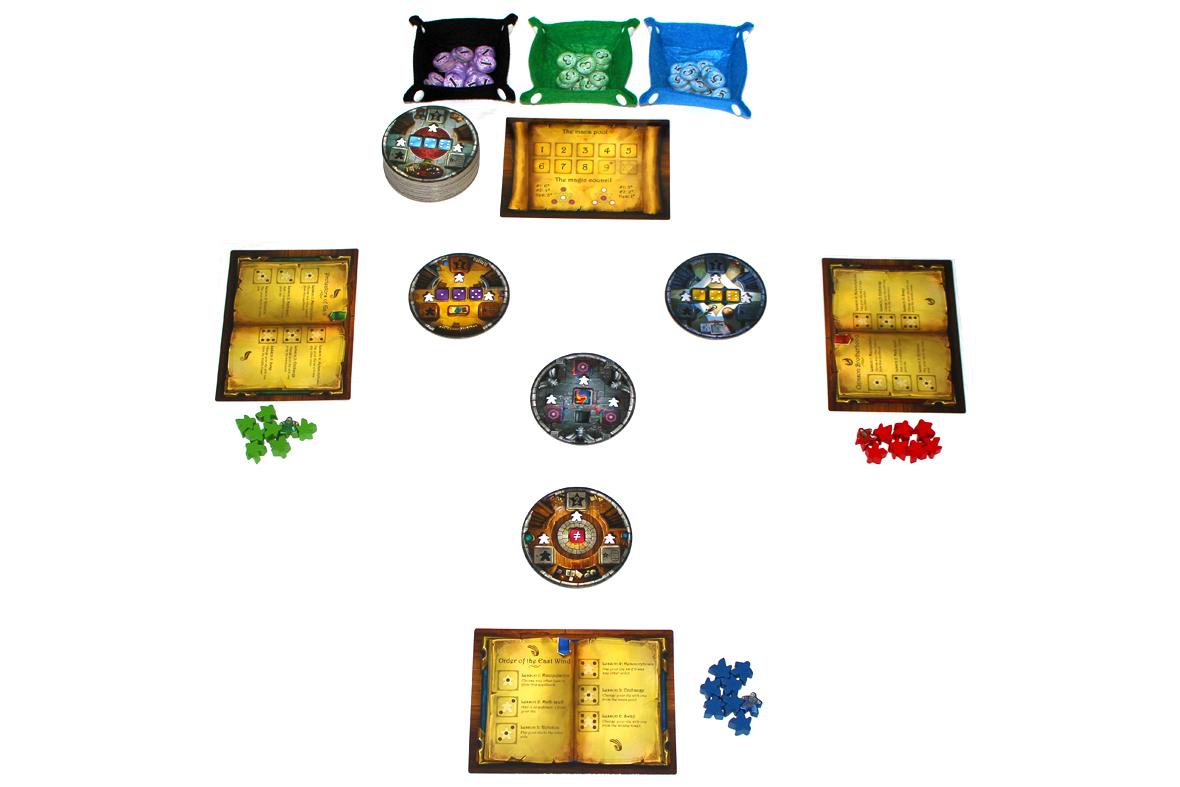 A game of Towers of Arkhanos consists of some dice drafting to build up the various towers. As you do, you’ll vie to control each floor, gaining some of its power for yourself. Once the powerful Arkhanos has run out of runes (dice), the game will end, and the player with the most points wins!

To start a round, roll dice:

Each player will then choose a die to place. Each tower tile has a restriction, indicated by the dice faces showing in the center of the tower tile. The exception to this is the center; any die can be placed on the tower in the center. When you place a die, put it on the square space and put your meeple next to it. On the outer tower spaces, this will then give you one of three abilities:

If you place in the center tower, you may take the following ability:

For the outer towers, award points as follows:

For the central tower, award points as follows:

Additionally, on your turn, you may use spells from your spellbook. You may use any number of spells, and when you do return the meeple from that space to your supply of meeples. Spells can change die faces, change die colors, and swap dice around; maybe that’ll be of some use.

Once every player has taken a turn, place the remaining die on the Mana Board and pass the dice bag to the player on your left; they’ll be the start player next round. 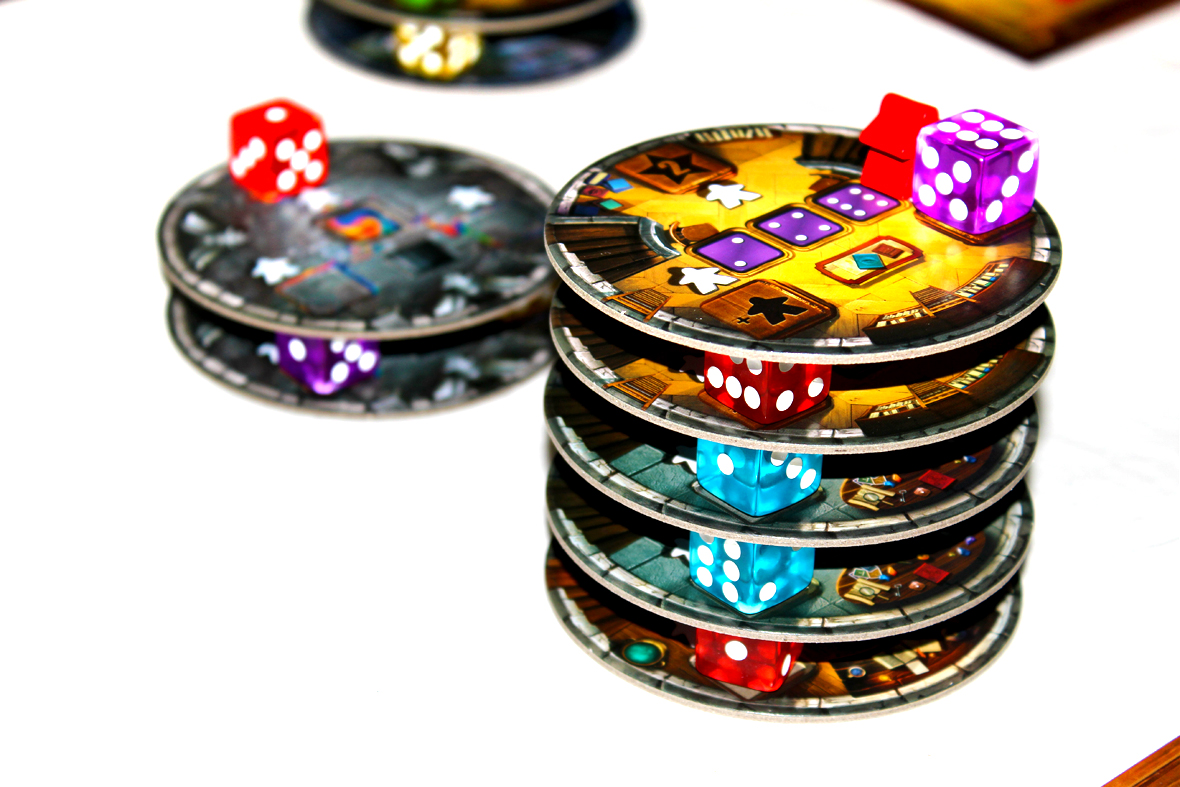 The game ends after 8 rounds (2 / 4 players) or 9 rounds (3 players). Once that happens, score all unfinished towers based on how much influence they currently have:

Additionally, each player receives one point for each meeple they have in their spellbook. Now, count points; the player with the most points wins!

So, I tend to prefer this at higher player counts because the towers tend to get a bit more intense, since it’s harder to predict who will go where. At two players, generally, either you take the tower or your opponent does, so your scores end up looking pretty similar towards the end of the game. At three, if a player messes up the delicate balance, the other players will benefit. At four, it’s sort of a free-for-all, which is a lot of fun. There’s more spells, more contention, and, dangerously, more towers that you get left out of. I think I tilt towards 3+ players, for that reason.

Overall, I think The Towers of Arkhanos is solid! It’s the right length for a dice-drafting gateway game, and I think they did a smart thing focusing on making the game play vertically. Similar to Saloon Tycoon, it gives the game a lot more table presence, which I really appreciate. Add in bright colors and solid art and you’ve got a game that’s going to catch a lot of people’s attention, which is pretty smart as well. I’ve made some comparisons to Sagrada, and I think I prefer Sagrada to this, but between the two I’d be much more likely to bring this to a board game night, especially if I don’t know the people participating all that well. The lack of a spatial component limits the amount of analysis paralysis that players experience, and the tower tiles all being the same effects means that players aren’t trying to plan too aggressively for long-term impact (or luck of the draw). It’s much easier to plan when you know what you’re up against, and I think that this is a nice way to introduce players to dice drafting as a mechanic ahead of slamming them with Sagrada or Tag City, for instance. Either way, I also have a soft spot for wizard games, so if you share that or if you’re looking for a game that’s got really nice table presence, I think The Towers of Arkahnos is a solid choice! I’ve had a lot of fun with it.