Full disclosure: A review copy of Tonari was provided by IDW Games.

Alright, this is the real last one before Gen Con, I think. I got this a bit ago, but it’s a Gen Con release so I pushed Teenage Mutant Ninja Turtles: Mutant Pizza Party back a few weeks to try and fit this in beforehand. Hopefully that’s not a particularly huge disappointment for y’all, but, it’ll get reviewed. That said, the pre-Gen Con schedule is still in flux since I imagine there will be plenty of games that want to get reviews in before Gen Con, but we’ll see what ends up happening. Anyways, let’s move on to talking about Tonari.

Tonari is set in the small village of Kuchinoshima days after a massive storm. Unfortunately, that storm sunk everyone’s fishing boats, except for one, and y’all need to eat. A few intrepid fish catchers (that’s y’all) set out to prove themselves the greatest catchers in the land, and they’re going to need all the help they can get from each other if they want to make it back home in one piece. Will you be able to make the best of the opportunaty, or are you in for a reel disappointment?

Not much to tell, here. Set out the board: 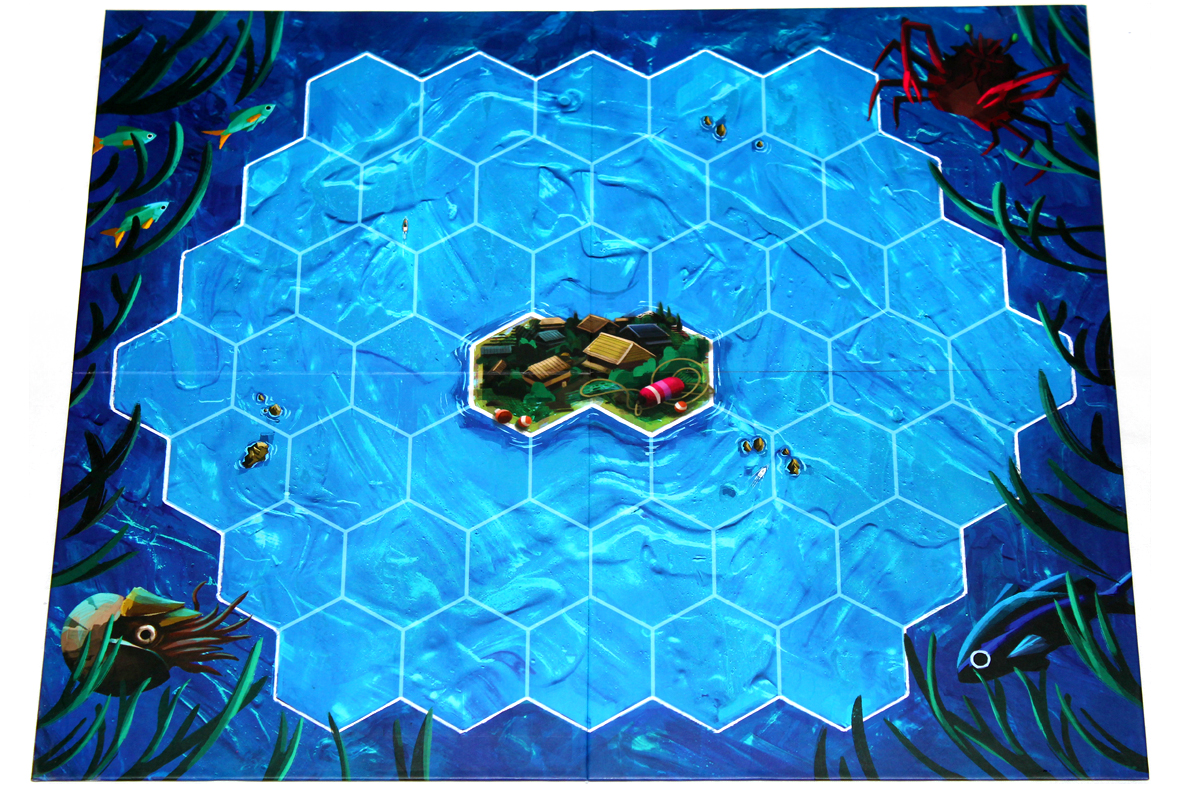 Then shuffle up the pieces and lay out one piece on each space, face-up:

It would help if you had a bag, but make the best of it. Once you’ve done that, the player to the right of the start player takes the boat token: 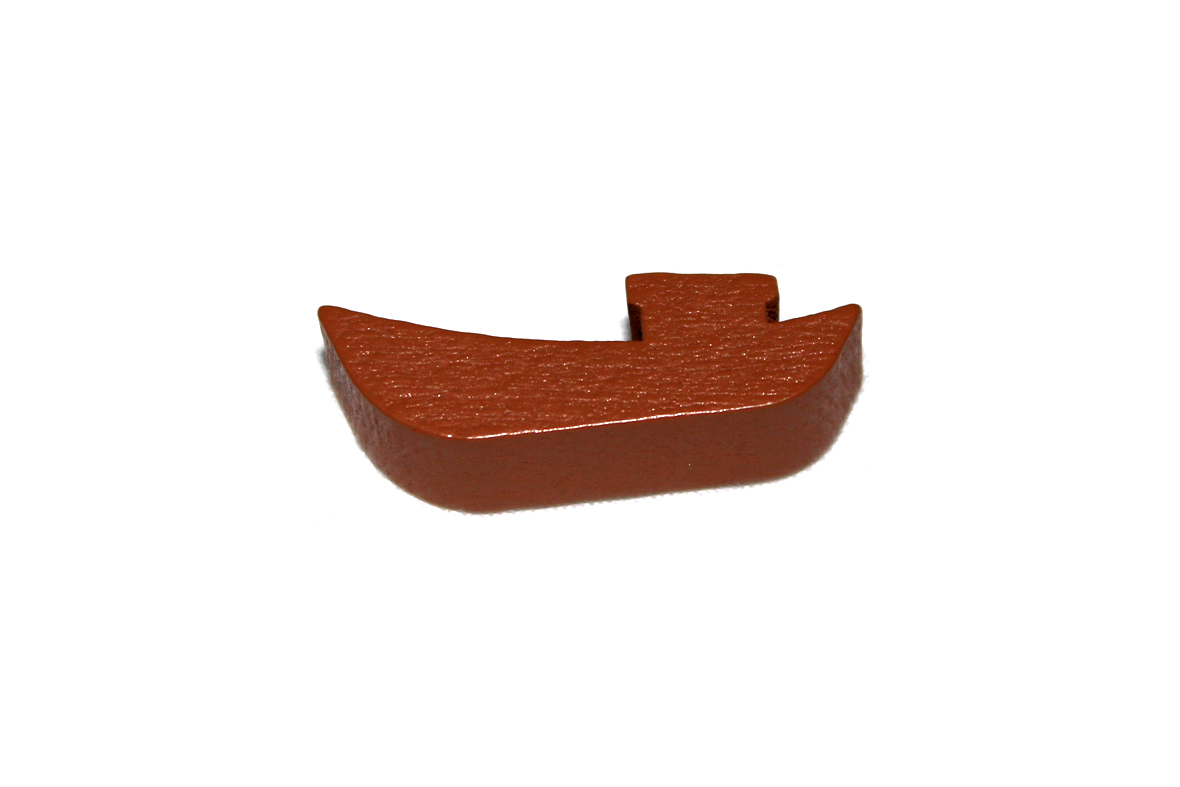 And places it on one of the two island hexes. You’re ready to go after that! 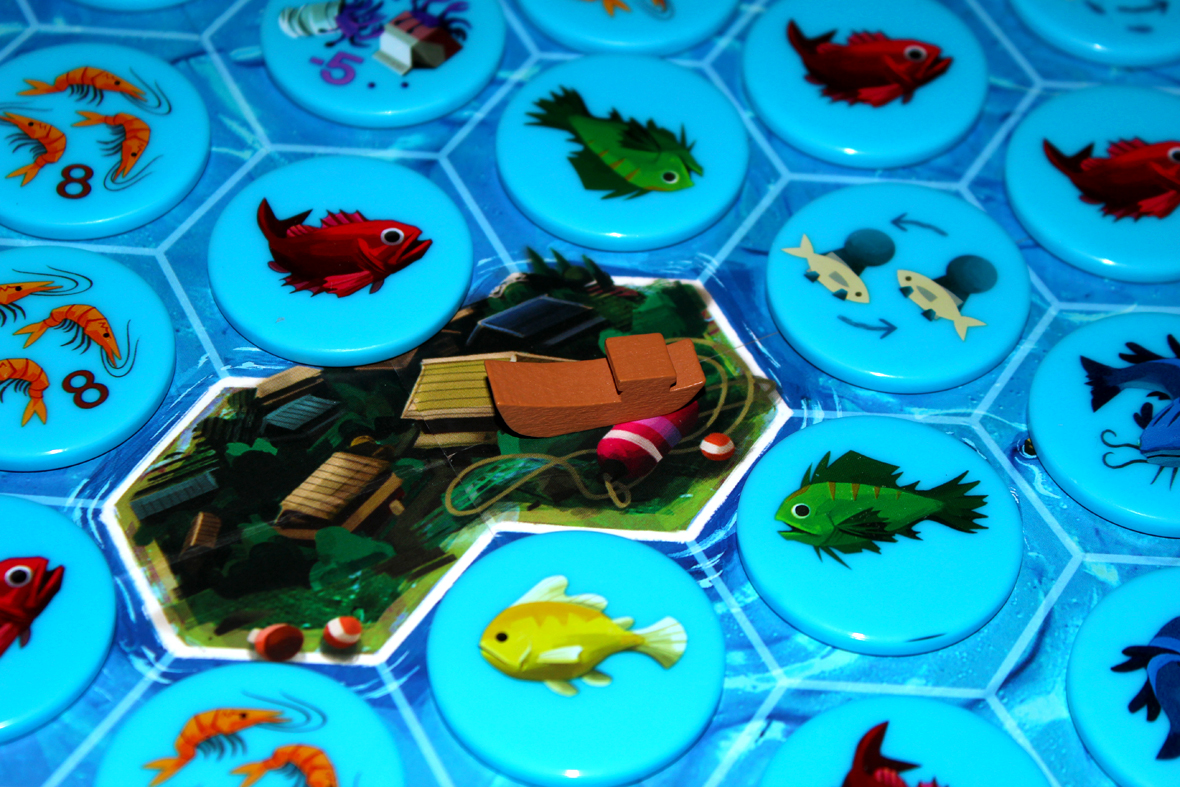 In Tonari, you play as local fishers forced to share one boat (better that than one submarine). While you’re going to help each other, each person is also secretly trying to catch the most fish so that they can carry themselves with pride when they get back to town.

So that’s just the thing, then. On your turn, you may move your boat to any space with a token on it (with some exceptions). Take the token. That’s all.

If you’re two spaces away from the pink fish and there’s an empty space between you, you may move into the pink fish’s space and claim it. The pink and purple tokens cannot be traded.

There are also special tokens you can claim, which do a few different things, like let you trade fish with an opponent, swap tokens on the board, remove tokens, or double the value of one fish type for all players. 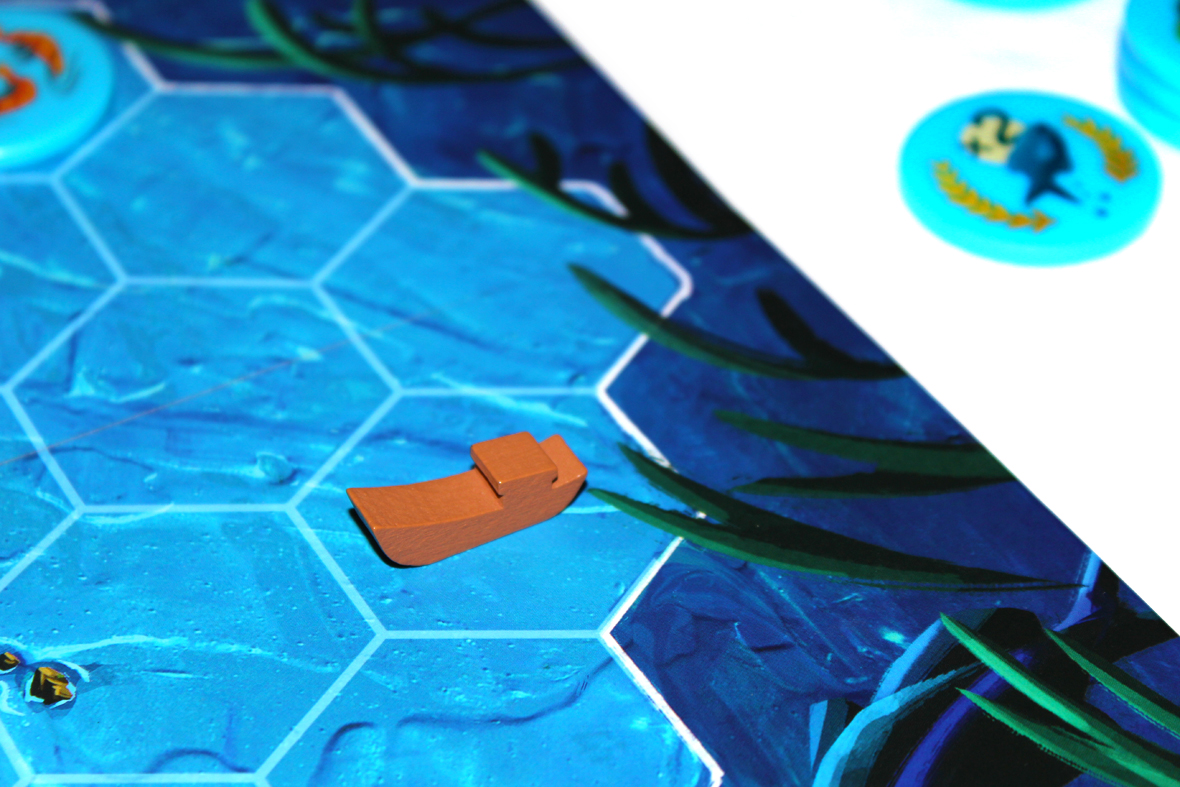 Once a player cannot make a valid move, the game immediately ends. Total your scores:

Once every player has their score, also add in the player on your left’s score. Y’all are working together, right? That’s your final score. The player with the highest score wins! In a two-player game, your final score is just however many points you scored; adding in another player’s score would just cause a lot of ties.

It’s wild at different player counts, because of the semicooperative aspect. Each player has to worry about their score and the player on their left’s score, so it means people generally try to keep you in a decent spot and just hammer the person after them. The ideal form of this is that you can lock your next player into a pattern that causes them to mess with the player after them. That way, it doesn’t affect your score! The major issue is that this can cause a lot of score-counting and AP, as players get antsy and tend to focus on whether or not they can win currently (as well as who is in the lead / last place). That can slow the game down a fair bit, but I do pretty consistently enjoy it regardless. Definitely recommended at two and three players, and a tenuous recommendation for four as long as your co-players don’t have a problem handling analysis paralysis or anything. 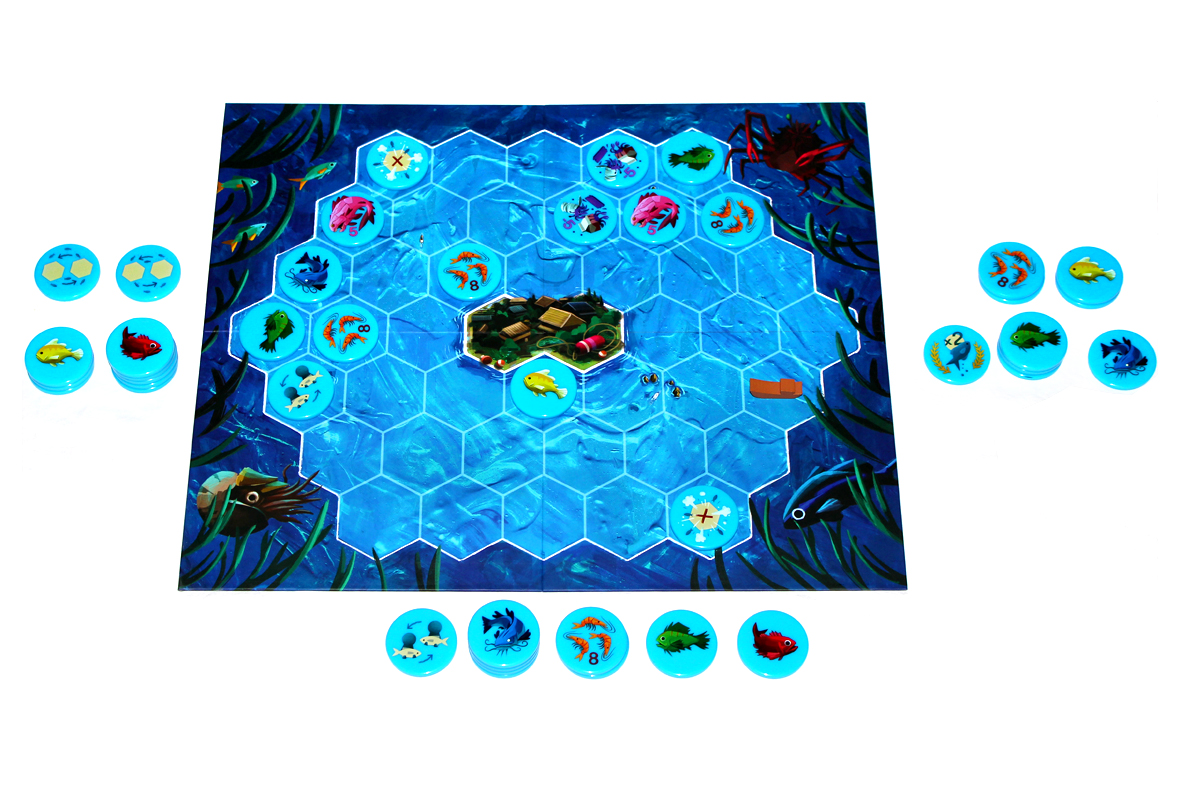 Overall, I think Tonari is really solid! I particularly like how quick it is, even at two — at two, it’s essentially an abstract with some really fast game-ending scenarios, which is kind of interesting. At higher player counts, the emergence of the semicooperative gameplay turns it into something else very interesting, as you try to balance helping others with helping yourself. You still want to get the most, naturally, but helping your co-player get the second-most isn’t a bad situation by any means; you’re just exercising your benevolence. And that’s an interesting concept for a game, the idea of competitive benevolence. It means the game isn’t nearly as aggressive as you’d expect for a quick game like this (though it can get that way at two players). It also means that the negative point tiles are not something you want to mess around with, since that might hurt you (if it hurts the player going after you). All of that alone is quite good, but, it’s also got some pretty great art courtesy of Kwanchai Moriya, and it’s bright, colorful, and engaging. It’s a really solid gateway-weight title, and I hope players will check it out. If you enjoy that sort of thing, like the odd abstract, or just enjoy colorful or semicooperative games, Tonari is definitely worth checking out! I’ve had a lot of fun with it.