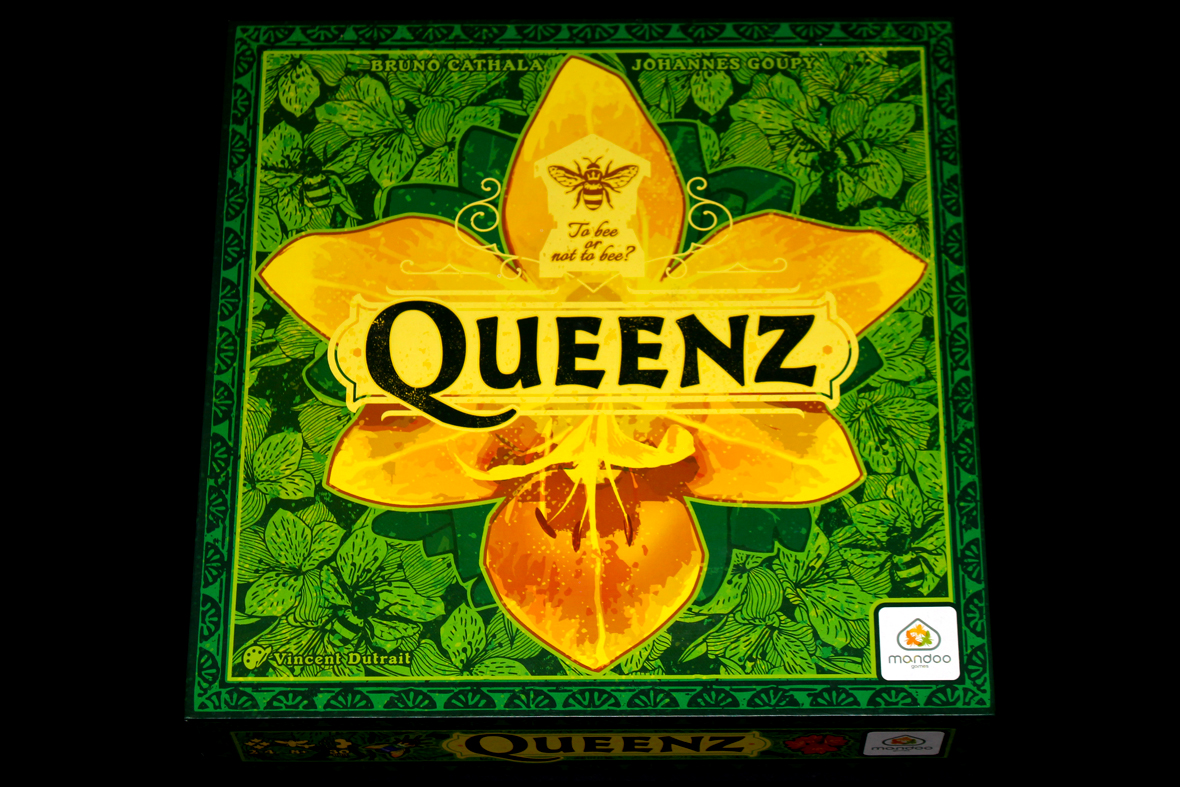 Full disclosure: A review copy of Queenz was provided by Mandoo Games.

Oh heck, am I excited for this game. So Mandoo sent me a bunch of games, and I reviewed them, and then they sent me two more: Dark Horse, and Queenz. That was a while ago, so I’m glad that I can finally get this review out in time for the Essen Preorder to start. I’ve been wanting to talk about it for a while, and while I unbury myself from the Gen Con releases, this seems like a pretty great way to start getting the ball rolling.

In Queenz, you play as beekeepers trying to wrangle your buzzy friends and help them create hives and pollinate flowers. It’s a really good thing to do, provided you don’t get stung. Thankfully, in the game, you can’t! That said, your opponents are also trying to bring up their honey production, so you better prove yourself fast if you want to be the best beekeeper (or the grandest gardener; it’s really up to you). Collect flowers to attract bees and build a garden worth celebrating; will you be able to create something that blossoms into victory?

Not a ton to set up, but it’ll take some doing. Shuffle all the Orchid tokens (there should be like, 125?):

Some of the Orchids in your copy are black. My review copy doesn’t have that variant, so, nope. I’ll talk about it a bit later, but if you want to play with them, shuffle them in, as well. Set out the Garden in the middle of the play area:

Put one Orchid token on every space. Yes, that will take a while; get the other players to help. Now, make a stack of the Diversified Production Tokens:

10 goes on top; then in decreasing order. Shuffle up the Field Tiles and lay out 5: 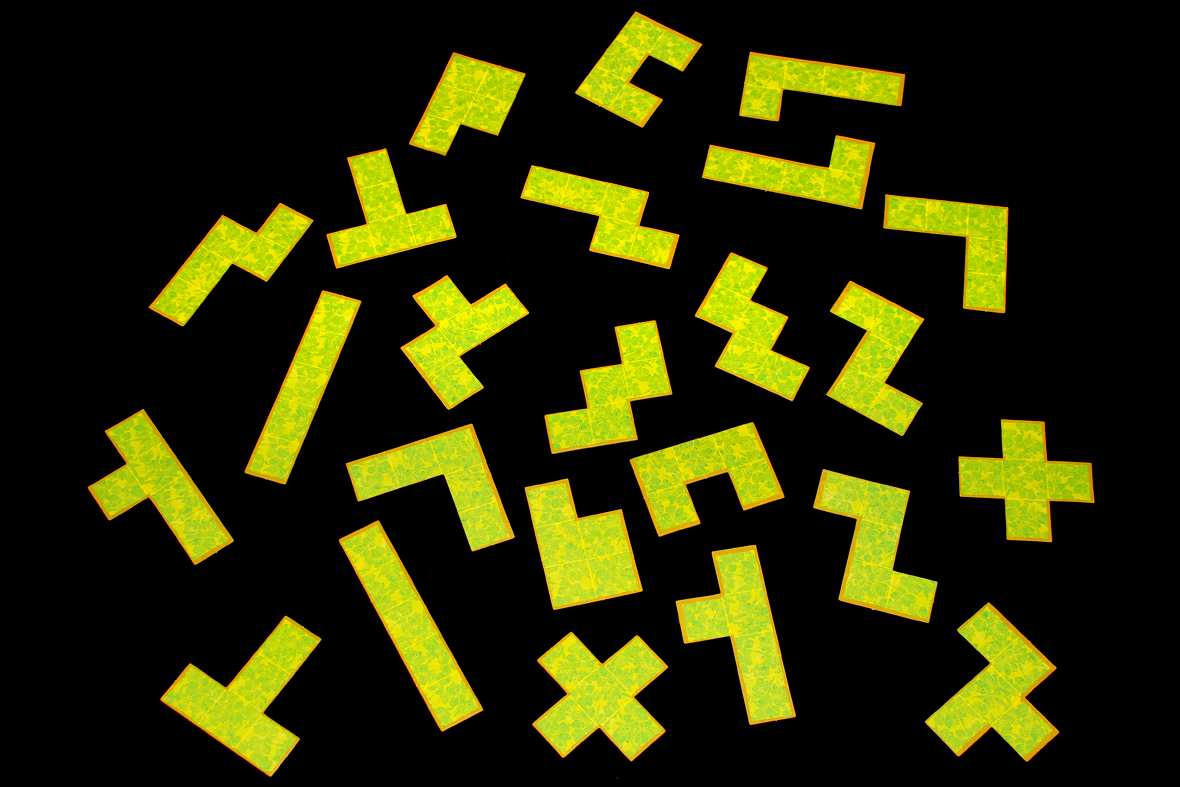 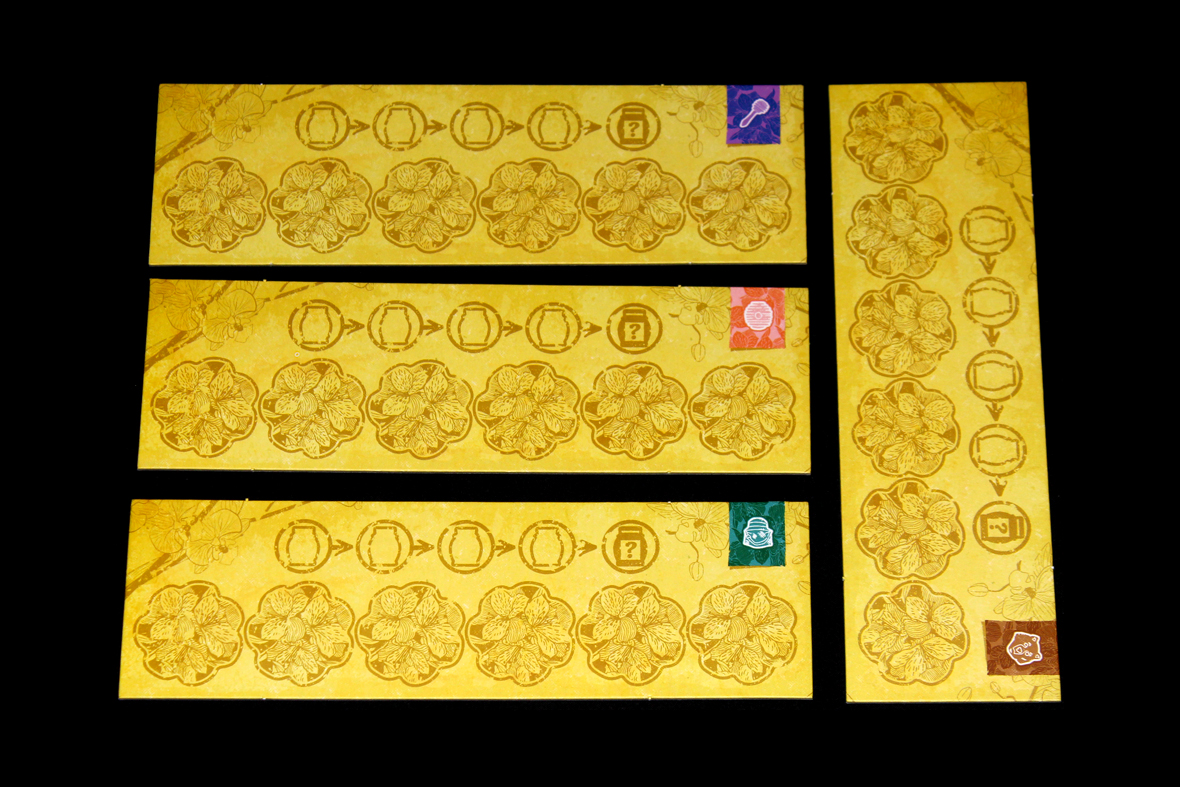 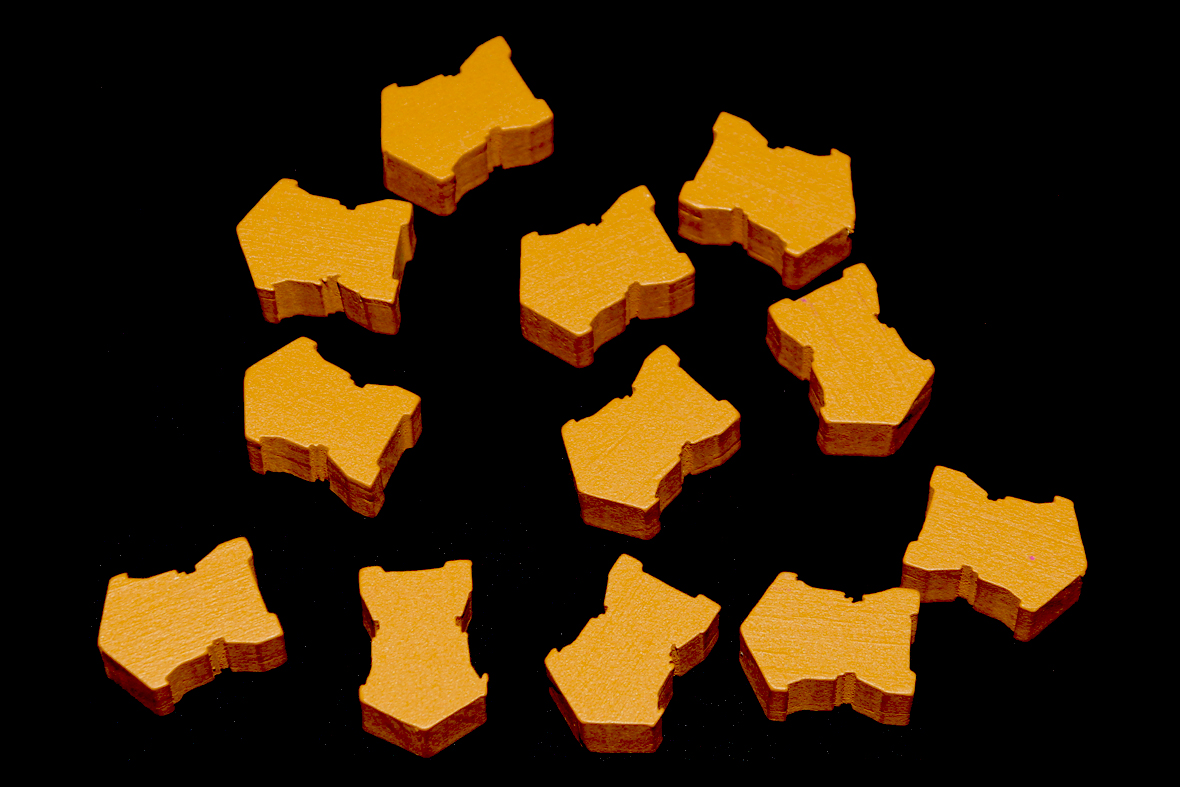 And a set of honey tokens:

Set out the scoreboard with each player’s score tokens:

Choose a first player, and they’ll put the Gardener on a row or column of their choice (around the edge of the Garden). You should be all ready to start! 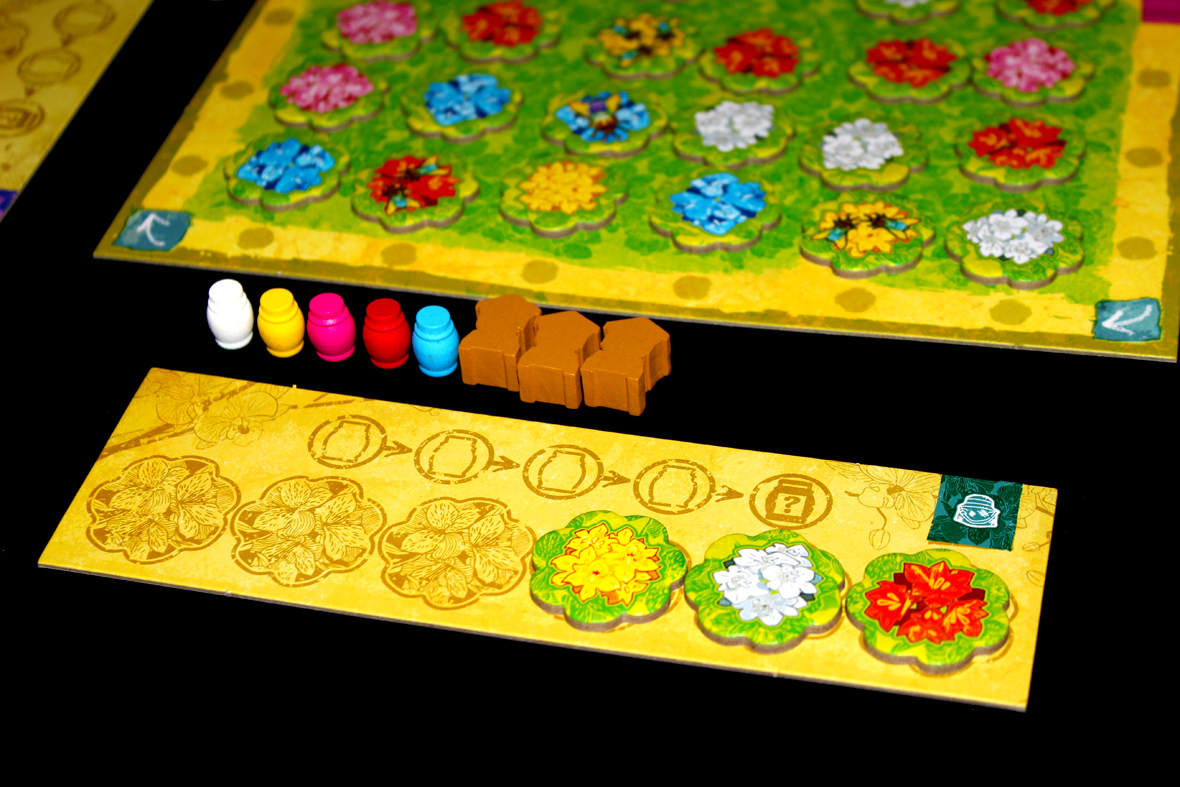 Your goal is to become the best beekeeper, and only an impressive garden full of hives will get you anywhere near that. So, to get there, you gotta plant flowers, get bees, and make the garden they’ll enjoy.

On your turn, you may do one of two actions: Take Orchids or Fill a Field. I’ll discuss each in turn. 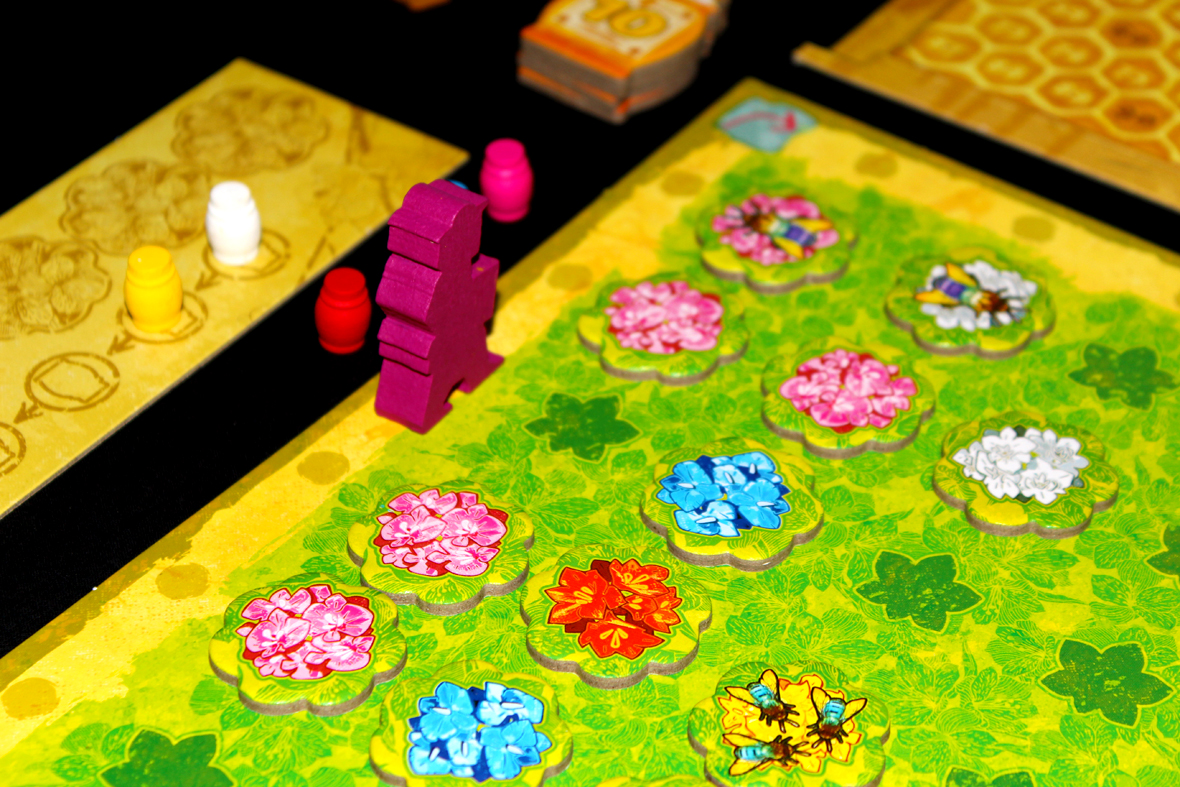 To take Orchids, look at where the Gardener is standing. You may take 1, 2, or 3 Orchids from that row / column, following these rules:

Add them to your player board, and then move the Gardener a number of steps clockwise equal to the number of Orchids you took. Do not refill the board after taking Orchid tokens.

If you took one Orchid with a single bee on it, that’s a Queen! You may swap it for any Orchid you’ve already placed in a field, but you score no bonus points for it. More on that in a second. If you don’t use that ability when you take it, though, you cannot use it later.

This one’s fun. Rather than taking Orchids, you may use the ones on your player board to fill one of the available field tile. To do so, take any one field tile from the available display (without refilling) and add it to your garden. If it’s the first one there, just plop it down, but if it’s not, it must be adjacent to another field tile.

Now, score! Each honey color that you produce is worth Victory Points. You produce if:

Either way, count the number of tokens in each of your producing groups, and score that many points. If it’s your first time scoring that color, you gain a honey token of that color to your player board. If you have one of each of the five colors of honey being produced, you’ve achieved Diversified Production! Take the highest-remaining Diversified Production token and add it to your play area. Bees and Hives will score later, so don’t worry about them, for now. 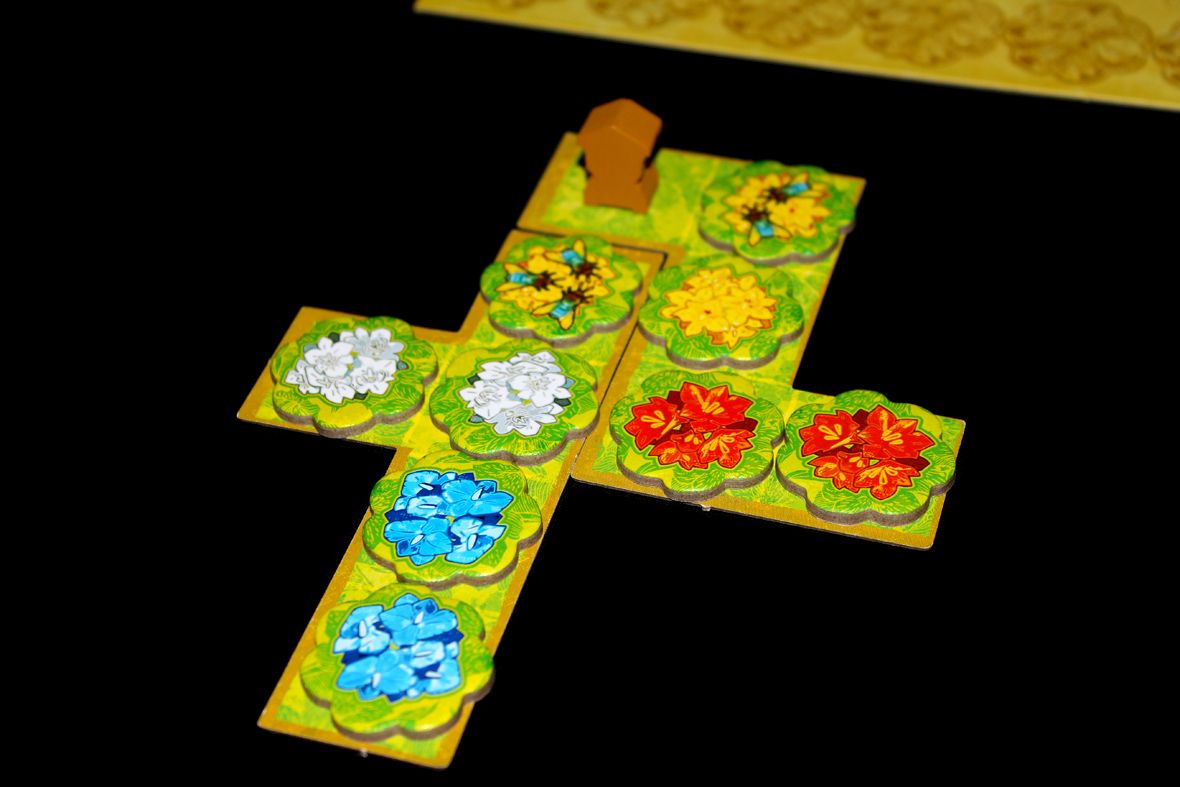 You might notice that I specifically mentioned that you do not refill the Garden or the Field Tiles, so how do you get more? Well, let’s dig into that. There are certain circumstances that will force a refresh: 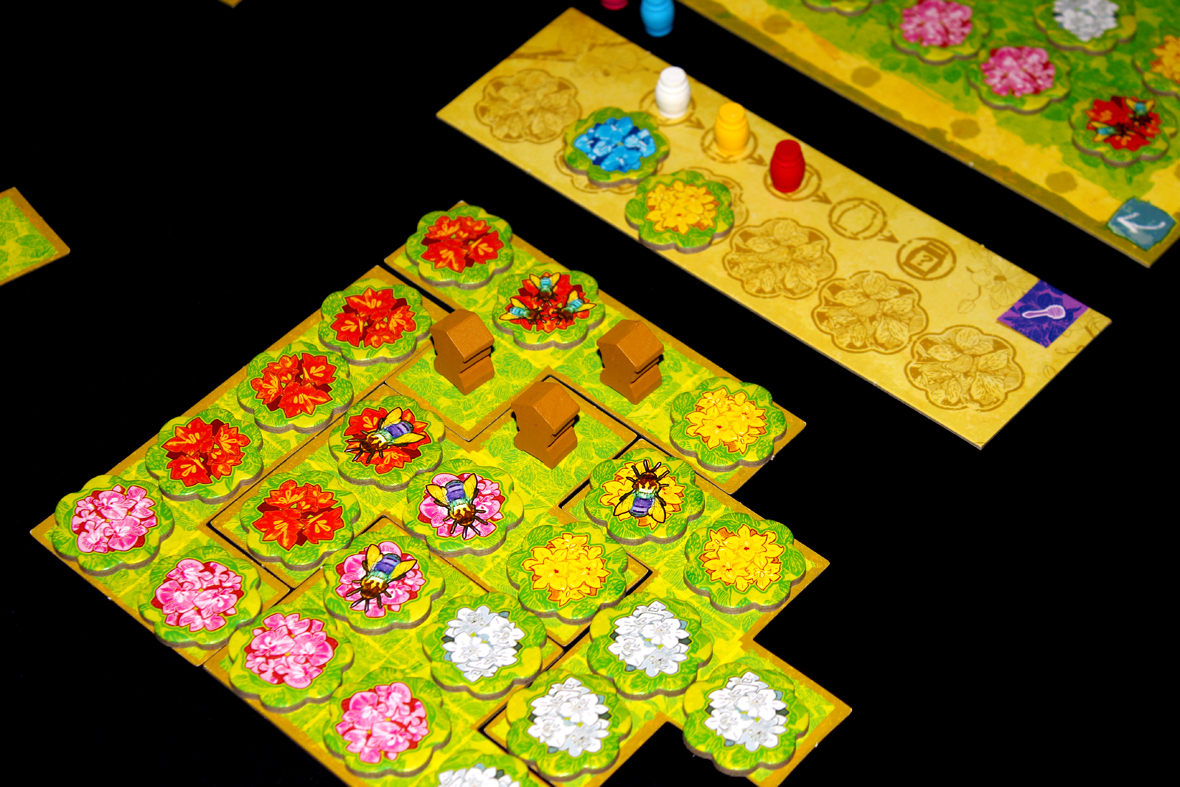 Play continues until one player has completed their fifth Field. Every other player gets one final turn. You may take more Orchid tokens or fill a Field as usual, but if you don’t have enough tokens you’re fine leaving empty spaces.

Now, score your final bonus points: your Hives! For each Hive, every bee on an Orchid token in the 8 spaces surrounding it earns 1VP. Many Orchid tokens have more than one bee on them, so make sure you count correctly! Also, a bee can score more than once if it’s adjacent to multiple Hives.

Add your total: Hive VPs + Orchid Field VPs + Diversified Production, if you earned it. The player with the most points wins!

If you’re playing with the Black Orchids, you may attempt to take them as you would another Orchid token. The only catch is that you can only take that token. When you do, discard it, and draw 3 Orchids from the draw pile. Choose any 1 or 2 of them to keep (even if they have bees), and shuffle the others back into the draw pile. Move the Gardener one step forward.

Not really any particularly huge ones; I think the game scales pretty nicely and gracefully at higher player counts or lower ones. I’ve tried all of them and I’ve still really enjoyed the game. It’s possible at higher player counts that there will be more market variability before your turn, sure, but it’s also more likely that the market will get drained or the Gardener will get pushed further, so, it’s hard to say that any one thing is better or worse at higher player counts. Just make sure that your increased number of opponents don’t end up stealing things you absolutely need to be successful; that’s never good when that happens. Anyways, core point here is that I’d happily play Queenz at any of the stated player counts; I have no preference.

Overall, I kinda love Queenz. I think it’s superb. It’s tough, because Realm of Sand is my normal “this game better not end up being underrated” choice, but since Queenz isn’t out yet I’m really hoping this one takes off. I think everyone involved did an impeccable job on it, and the end-to-end product really shines. The art and table presence are great; the tokens and pieces are thick, useful, and high-quality; the design seems solid and the game has multiple useful paths to victory; the various parts of the game are fun and engaging as it synthesizes two different genres of game into a superior product. I mean, you can tell, I’m pretty over the moon about this game. I’m excited that I got to review it! It was a very pleasant surprise. I’d say, as far as light strategy games go, this is definitely one of my favorites; so much so that I’m really hoping it ends up making a run for some of the awards. I think that’s a good place for it. Either way, I’m really hoping this sees a wider release, because I think Queenz is awesome! I’d definitely recommend checking it out, if you haven’t, especially if you like light strategy games with fantastic art and great components. I’ve really had a blast playing it, and I look forward to the next opportunity I get to play again!