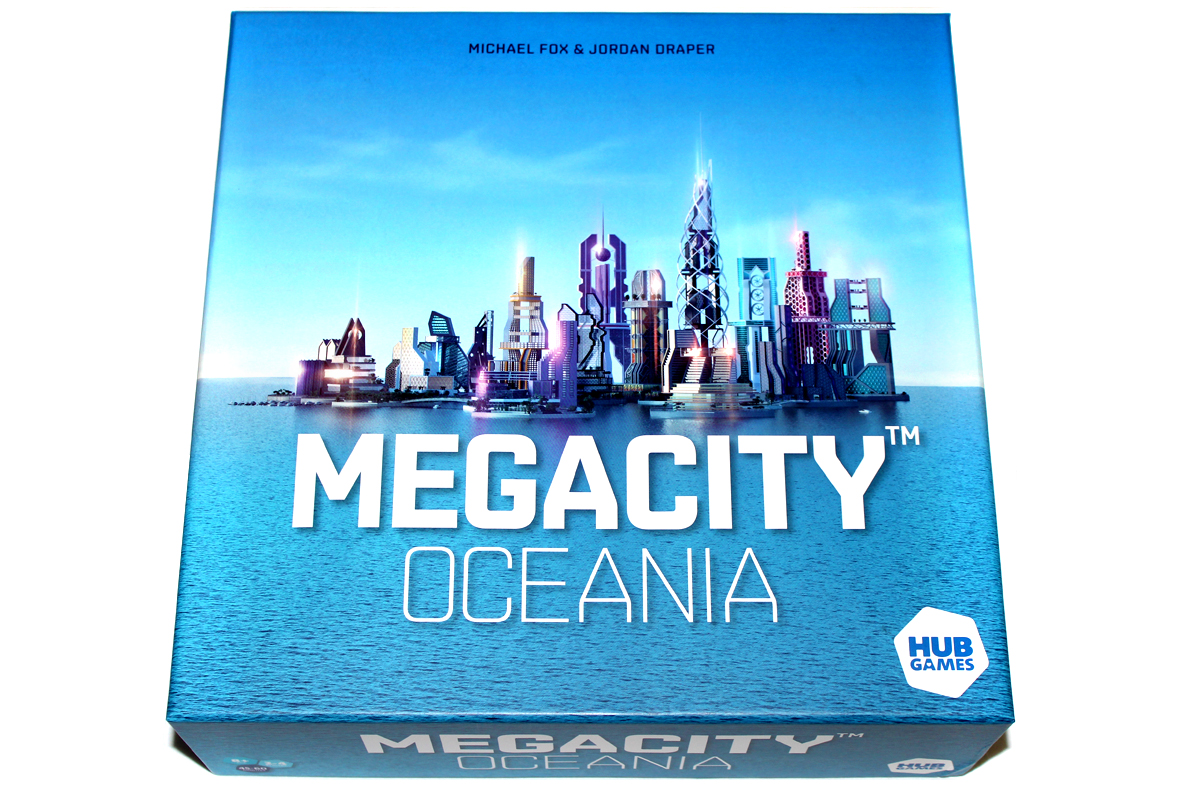 Full disclosure: A review copy of MegaCity: Oceania was provided by Hub Games.

Oh, hey, look, a Gen Con release. I’m going to trickle them out for a bit, now, before just opening up the floodgates over the next few months. There are a lot of games coming out of the con (too many for me to safely schedule), but I’ll be talking about all of them in due time. Let’s kick this review off, where I talk about MegaCity: Oceania from Hub Games, who published Untold and localized Flip Over Frog! Time to see what’s going on with this one.

In MegaCity: Oceania, the year is 2100, and you’re working off the coast of Australia. As you do. Growing populations mean that you need to find new sources of habitation, and so you think that people should consider taking to the sea. After all, there’s all the water you could ever drink in the ocean, you think to yourself and are never fully corrected. Unfortunately, you find out that your rivals are also planning to be involved in the project, so you need to prove that you are the most prestigious of them all so that you can basically be in charge of everything. That’s always nice. So build, platform, construct, push, and work your way to victory. Will you be able to construct the city of the future? Or will your chances of victory end up sinking?

To set up, you should first make sure you have a pretty large, flat table surface. Shuffle the Platforms: 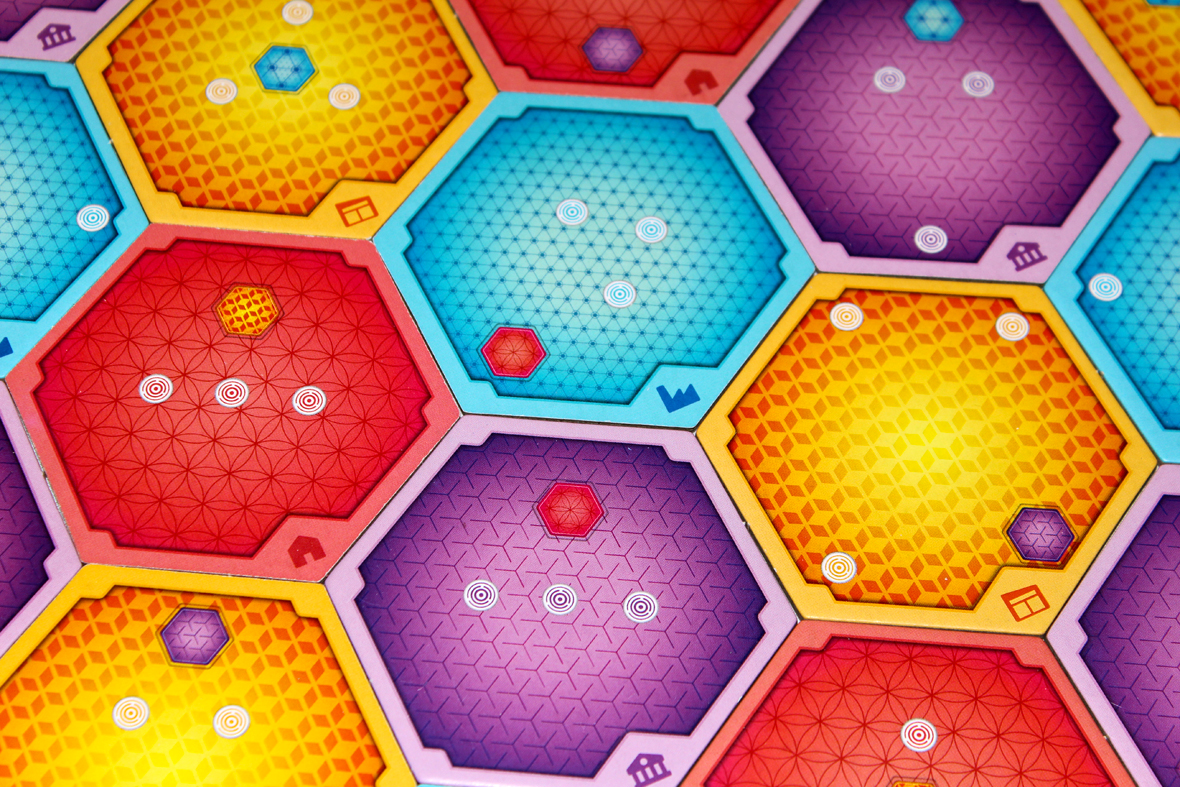 They’re double-sided, so flip those bad boys every now and then. Reveal three of them. Set aside the Landmark Contract Cards:

Shuffle the other Contract Cards: 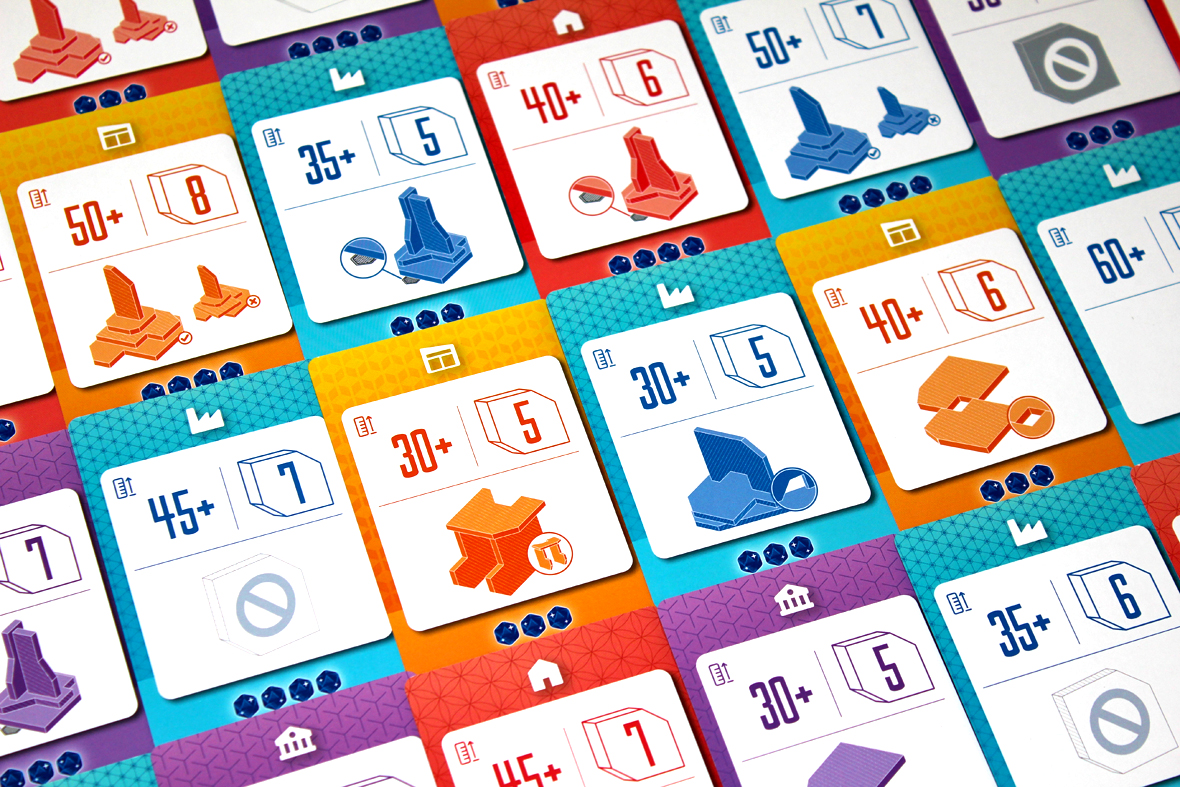 Deal some out face-up:

Just make sure that you have at least two cards of each color represented. If not, shuffle them back up and try dealing again, but better this time. You won’t use the other ones. Now, set out the Awards Bar (* side up; the ** side is for a friendlier game. You’re here to build cities, not lasting relationships):

Put the awards on the spaces indicated for them:

Set the tallest building marker and rulers next to them:

The tallest building marker is so tiny! It’s cute. Put the Prestige Tokens in some kind of pile: 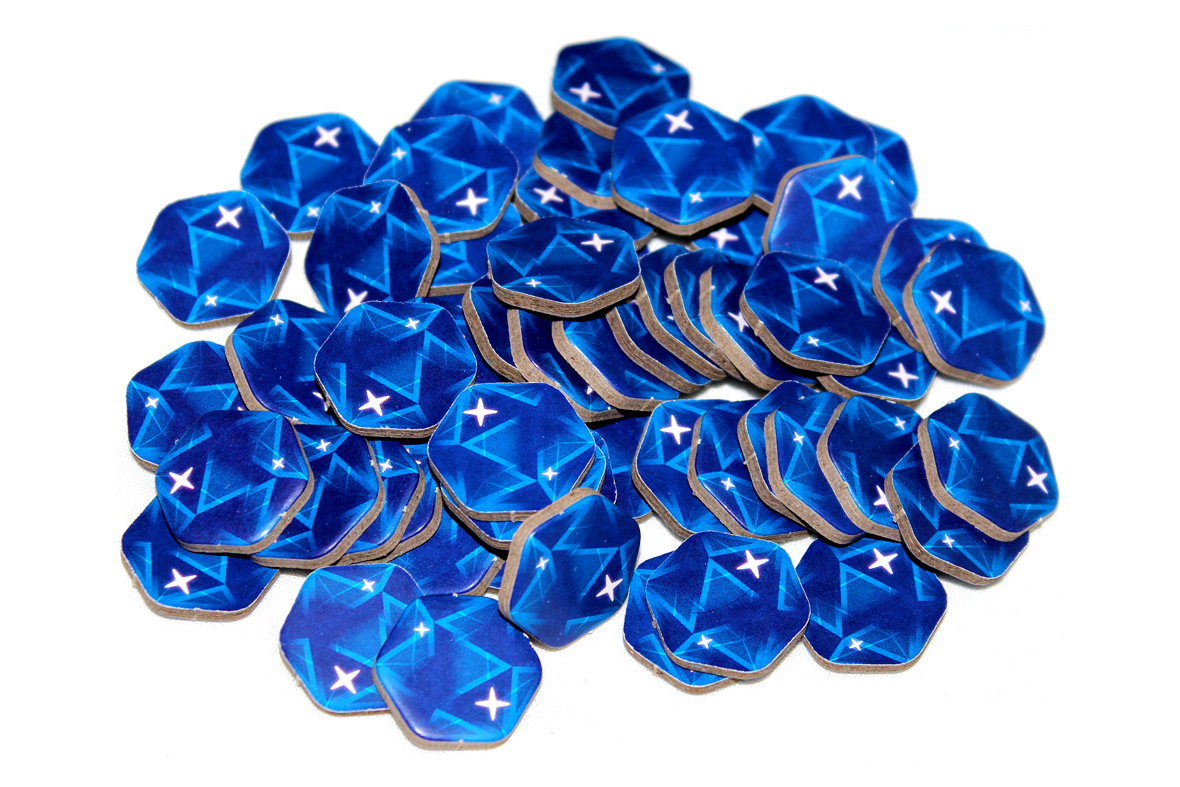 I usually use one of those token bowls to help myself out, being real. Now, you can put all the Building Pieces into the handy bag:

And give each player a park, setting Central Park (the one with the lighter hex) in the center: 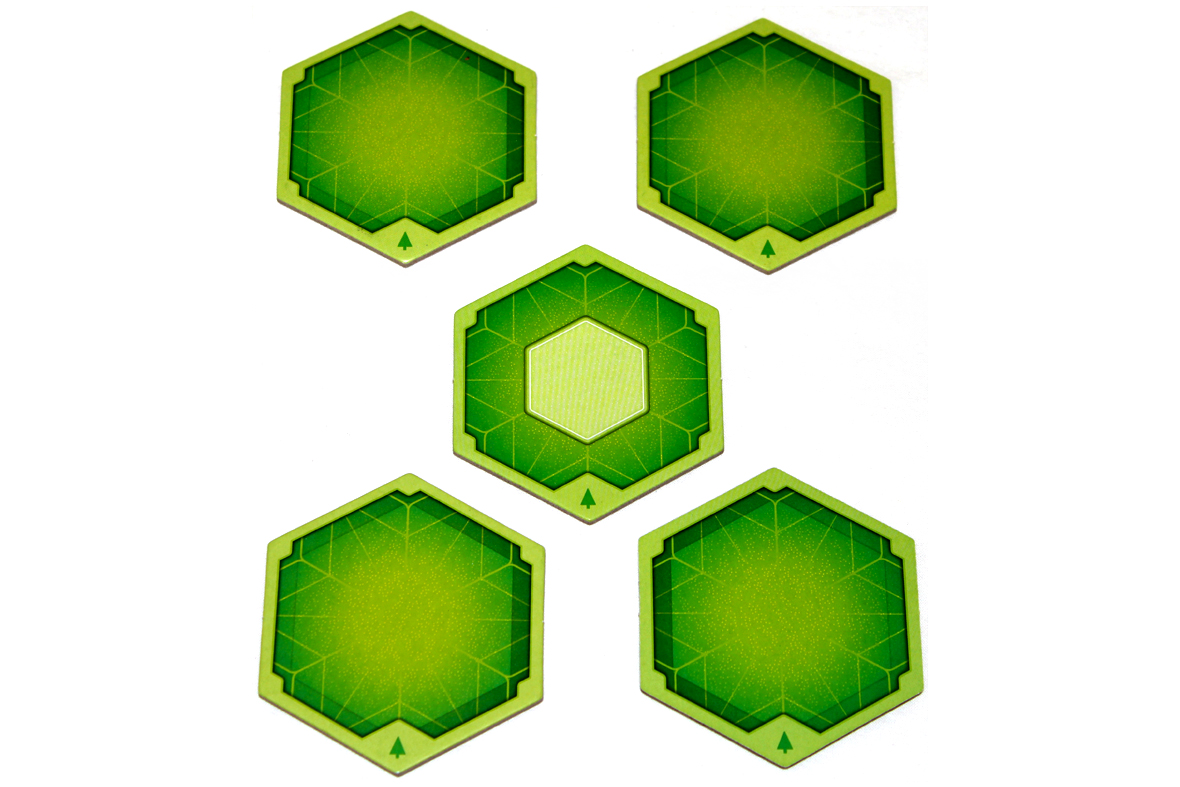 So, a game of MegaCity: Oceania is played over multiple rounds, as players work to finish lucrative building contracts and move building platforms over the water to build a new megacity off of Australia’s Gold Coast. Just make sure nothing you build falls into the ocean! 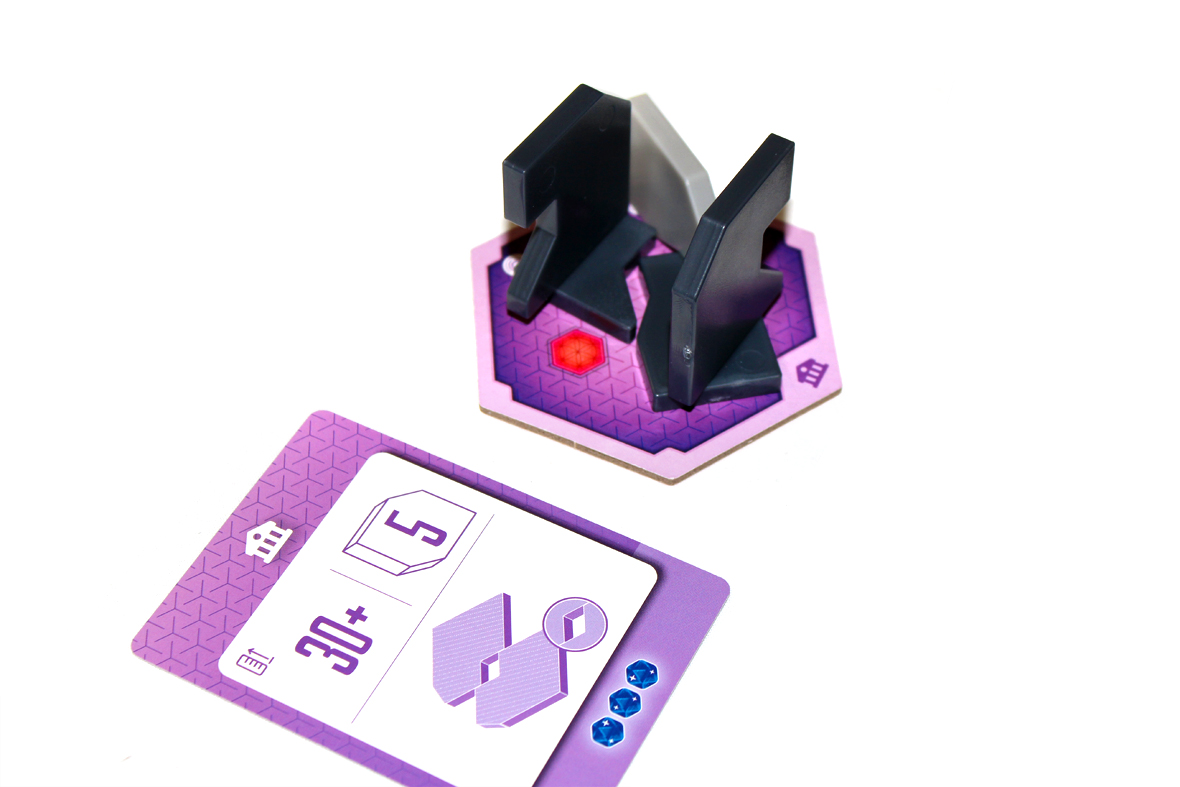 On your turn, you generally get 2 Standard actions (3 in a two-player game):

Instead of doing any of those actions, you may Deliver, instead. That’s big enough to warrant its own subheading.

When you say you’re going to deliver, show which contract you’re delivering and verify your building meets the height, piece count, and other architectural requirements. Everyone else should stop what they’re doing and verify / watch; this is officially a team sport. Also, add one of your player markers to the building somewhere (you can use that to inflate the height, if you’re feeling cheap). 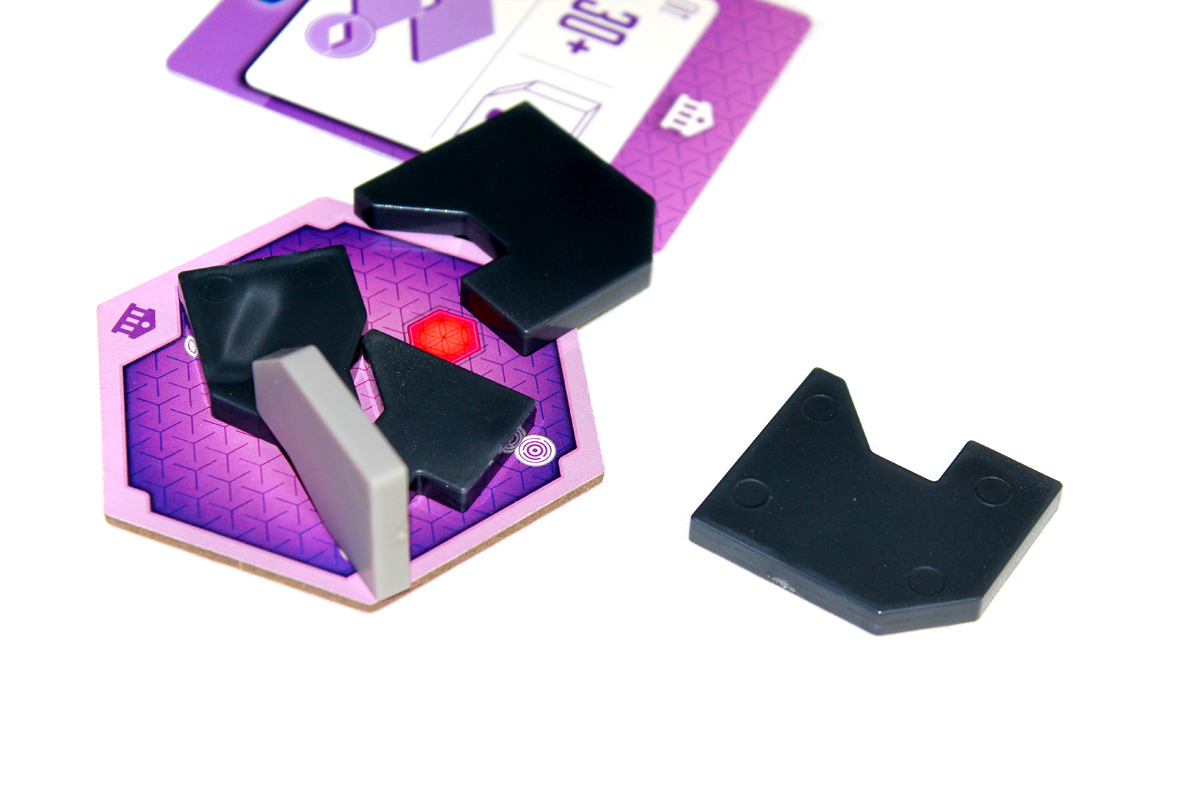 Here’s the tough thing. To deliver a building, you must connect it to one of the tiles in the center of the play area (provided it’s no more than three tiles away from Central Park). Unfortunately, the tile is currently in your play area, so you’ll need to push it over there. Be careful! If it falls, your turn ends. Take your pieces back and try again later. If it gets there successfully, it’s connected! You may take one of several bonus actions, provided you qualify for them. 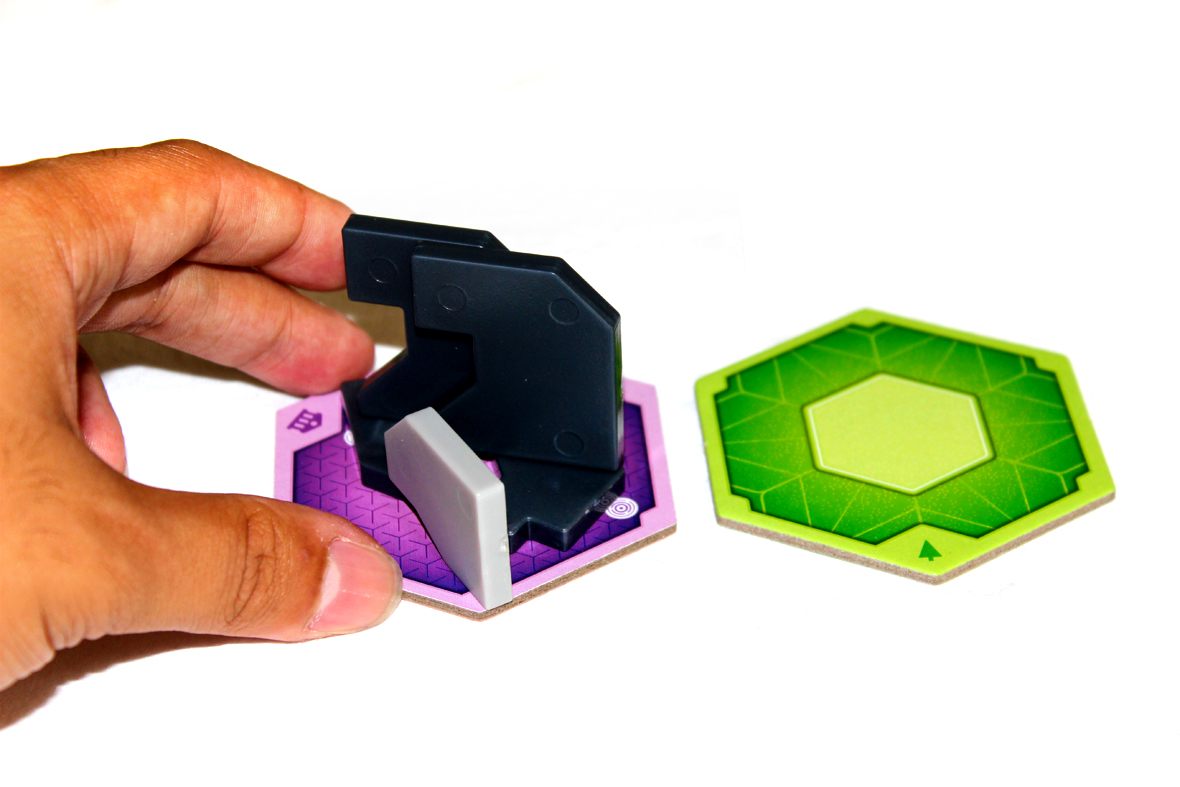 Then, check to see if you gained any Bonus Prestige Points:

Note that you can gain any combination of these points on a turn. If your Public Building is a giant glass-only skyscraper, you can gain 3 bonus points.

Some Clarifications on Falling

If you knock over a building while delivering it, as mentioned, you take all the pieces back into your supply along with the Platform. If you knock over other buildings, though, those pieces fall into the ocean and are not recoverable; remove them from the game. If this results in the tallest building being knocked over, move the Tallest Building Marker to the new tallest building. No player gains a point.

If a player is intentionally knocking over buildings to try and make sure they have the tallest building, remove them from the game.

Yeah, so the rules are a tiny bit unclear, in my opinion. Generally, we ask players not to spend too much time building on their turn, and we pretty explicitly disallow it in four-player games. Try to build between turns, not during them. In a two-player game you kind of have to. Just don’t be a huge jerk.

You can stack pieces however you want, so long as you cover the three white ports on every Platform and you don’t cover the hexagonal vent (unless you have an Architectural Requirement that you need to do so).

End of the Game 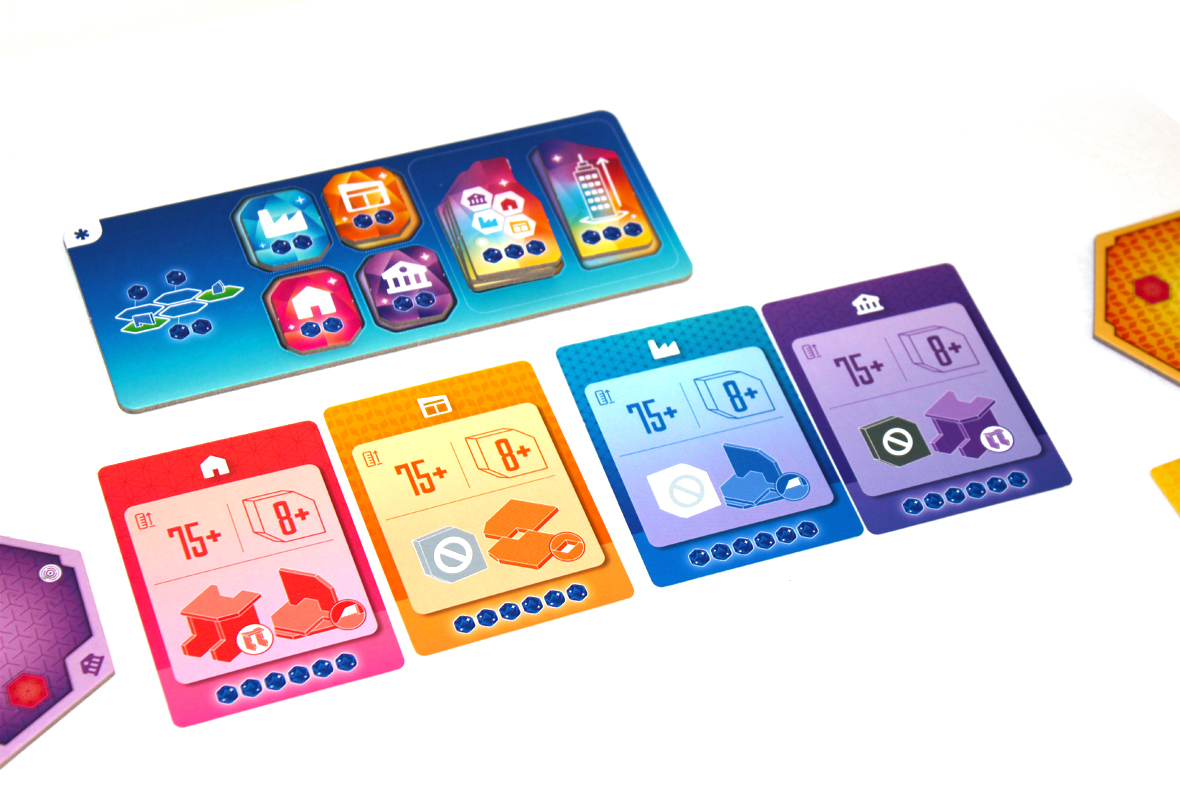 When the final Standard Contract is completed, all players get one final turn.  This also happens if the Building Pieces run out. Then, they get a sort-of-bonus-turn: each player may Deliver or Recycle.

Then, give out awards:

For a simpler game, use the ** side of the Awards Bar. Also:

For me, the major one is at lower player counts, you have a lot less downtime between turns. Normally that’s something I’d praise, but, in this game, you need that downtime to build efficiently. We’ve kinda legislated that you shouldn’t build during your turn except in 2P games, but I would be fine limiting that to “you cannot build on your turn once you’ve taken Building Pieces”, since that seems like a pretty consistent and enforceable rule. One thing you can try to watch out for at higher player counts is trying to get your buildings between two parks; if you can swing it, that’s double points for you for at least a couple of them, which is awesome. The game takes a smidge longer at higher player counts, but there aren’t as many contracts per player, so the timing mostly balances out. 2P is interesting for the additional bonus action players get on their turns, so I actually like both ends of the player spectrum, though I think the city is more dynamic at higher player counts. I like 2 players pretty solidly, but I think the game plays best at 3 – 4 players.

Yeah, overall, I’m pretty convinced MegaCity: Oceania is a triumph, as far as I’m concerned. I can see where some people are going to have issues with it. The dexterity bit won’t be for everyone, and I don’t think it’s got quite the catch-up mechanism I’m looking for. The nice thing is, though, that even if you’re getting clowned, there’s always a lot of cool stuff to do and build, so I feel like players get a lot of accomplishment out of the game regardless of their actual placement. To be fair, that’s a known bias I have towards building games; it’s part of why I love Catch the Moon so much, and even why I enjoyed Expancity, Carcassonne, and other games where you’re trying to build out a physical presence. I think those games are really, really cool, and I generally love seeing what’s being innovated on in those spaces. And I think this is innovative! It took TOKYO JUTAKU‘s pieces and elevated them into a pretty solid strategy game, which is worth celebrating, in my mind. Plus, it’s got a cool theme, great color scheme, and awesome table presence, so I’d say I’m not out of line to say that I’m really enthusiastic about i! Hopefully you’ll get a chance to try it soon, but either way I’d definitely recommend MegaCity: Oceania! I’ve quite liked it.